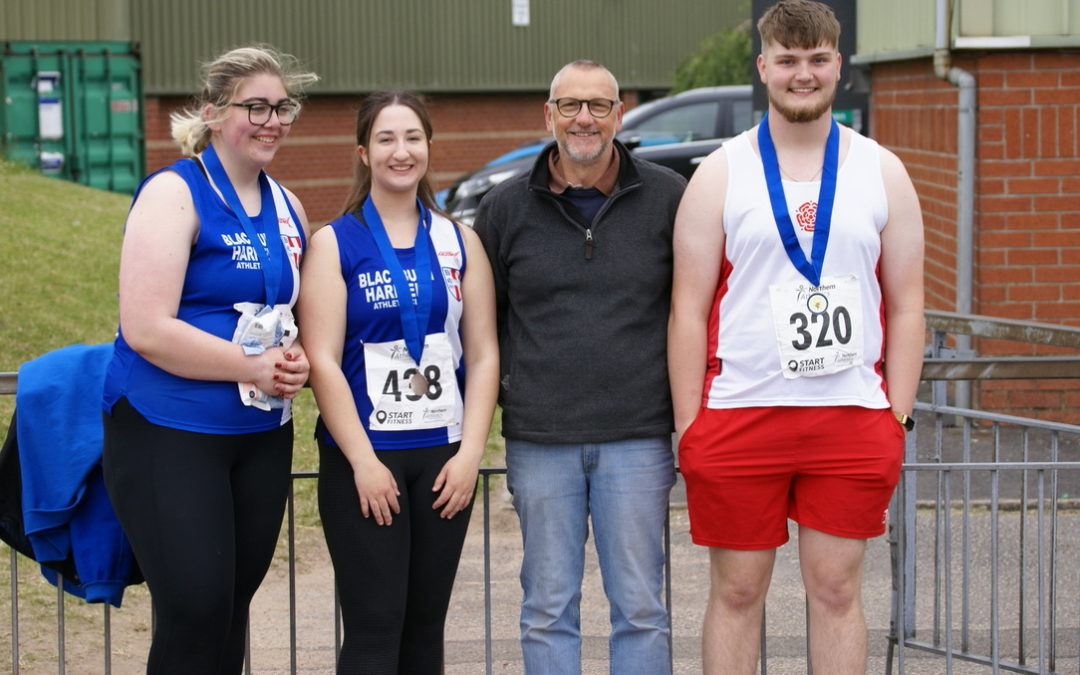 Liverpool Harriers track at Wavertree was the venue for the 2022 U20 & Senior Track & Field Championships. The weather over the weekend wasn’t ideal, alternating between bouts of sunshine – not much – overcast, cool, but above all, wind, which seems to have been around at every athletics event so far this season. Still, conditions are what they are and everyone has to contend with them the best way they can.

Blackburn Harriers had athletes entered in at number of events – the weekend turning out to be a successful one for the Club, securing four Gold, three Silver and three Bronze Medals. First up on Saturday morning was the Senior Women’s Hammer featuring five athletes, one of whom was the Harriers Charlotte Williams. In the end Charlotte won the competition with a best throw of 53.27m followed by City of York’s Maria Schofield in 2nd (52.23m) and Traffords Jemma Bate in 3rd (40.83m). This was the first competition of the weekend and set the tone for the Harriers athletes with Charlotte taking the Gold and the title. 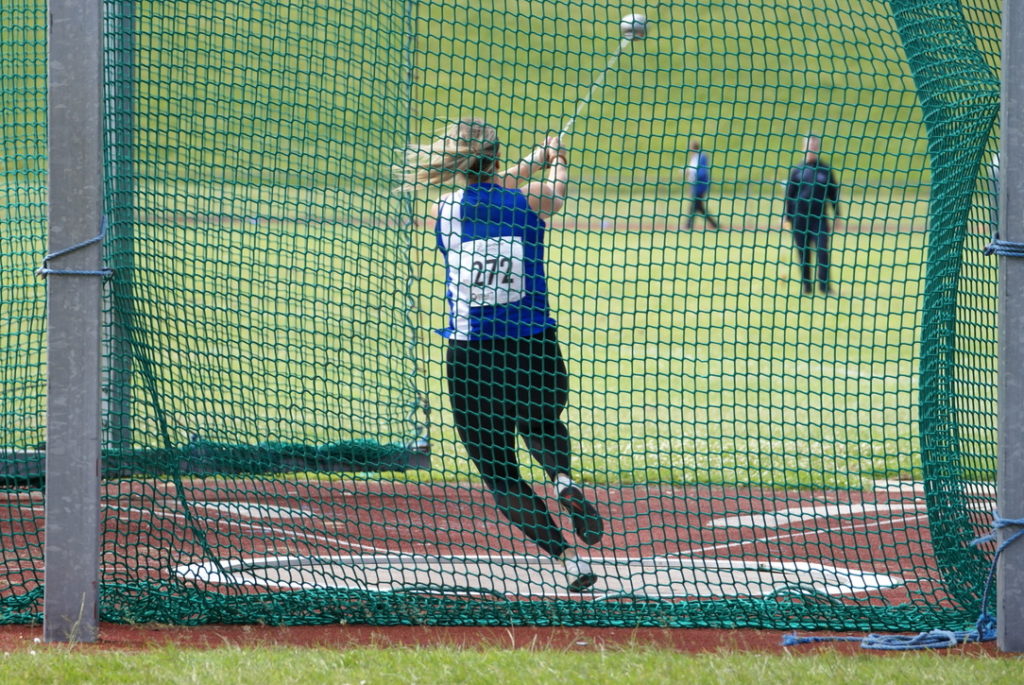 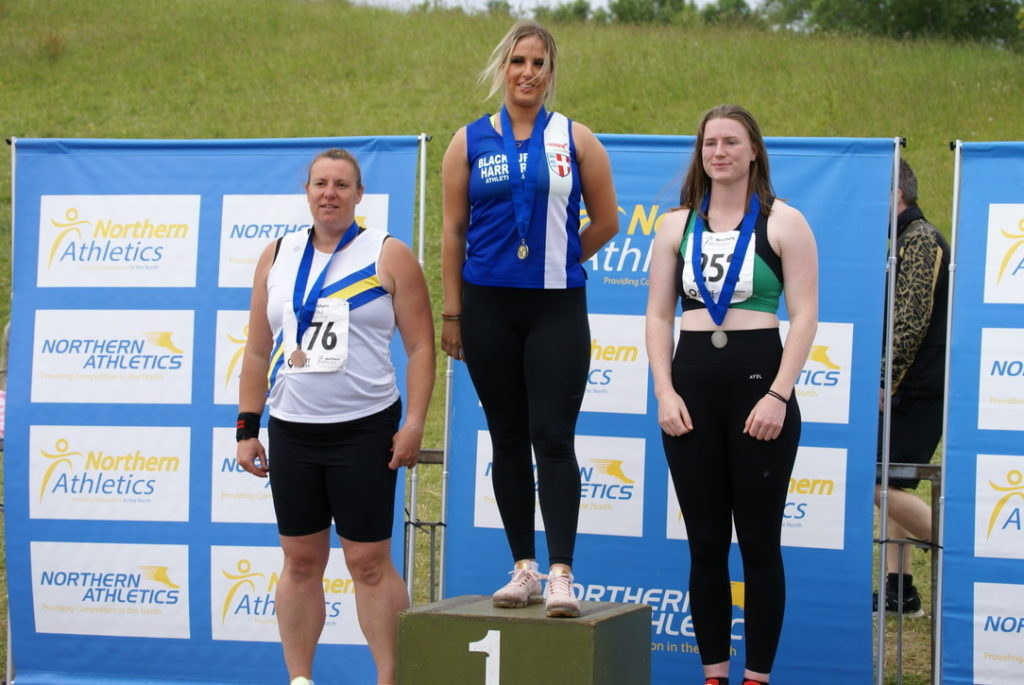 Next up was the Men’s 1500m Final with eleven athletes on the start line and among them Blackburn Harrier’s Daniel Bebbington who had only just clocked 3.42.98 and 3.41.62 at successive BMC meetings recently. Given the wind, it was predictably tactical with the whole field bunched up over the first two laps, Daniel leading the race out. On the final lap it came down to a sprint between three, resulting in Hallamshire’s James McCrae taking the win in 3.52.52 with Daniel in Silver Medal position clocking 3.53.25 and Blackpool’s Luke Minns in 3rd (3.53.52). 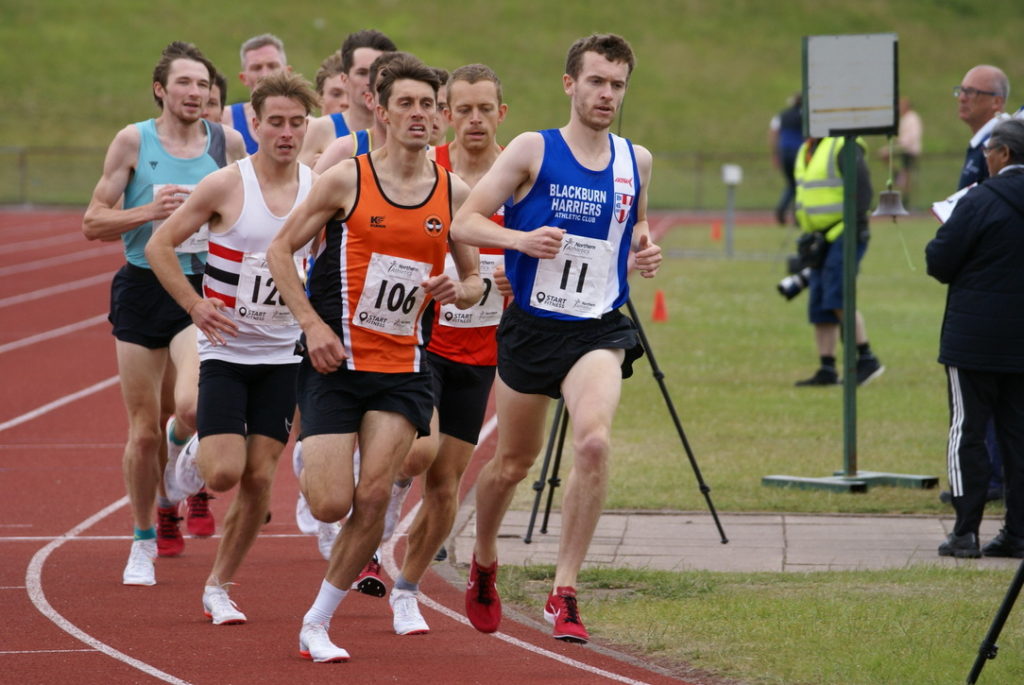 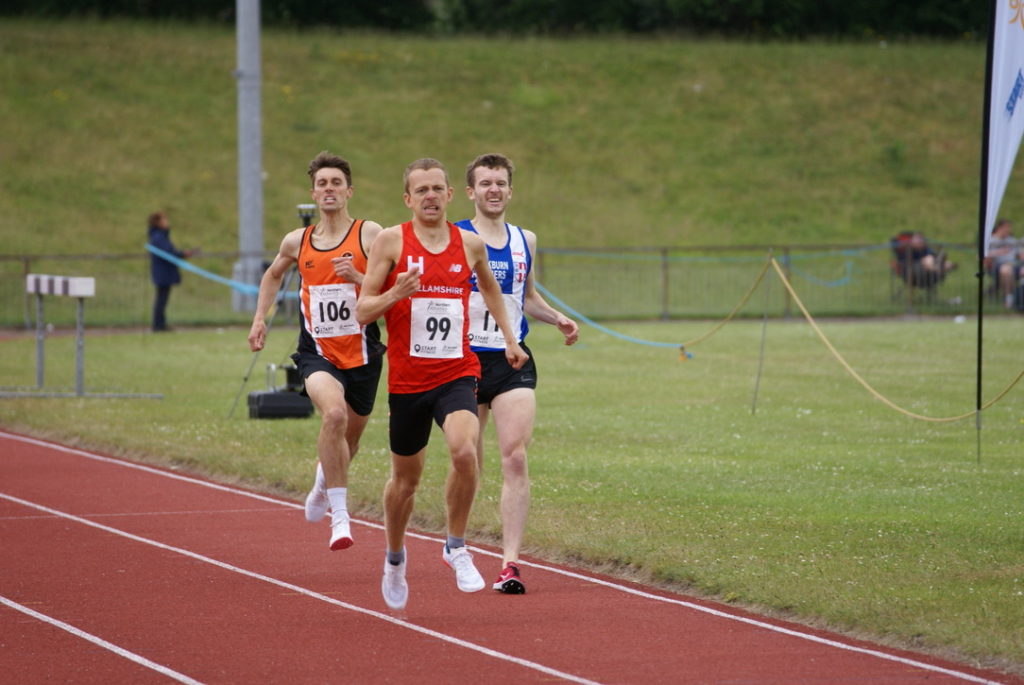 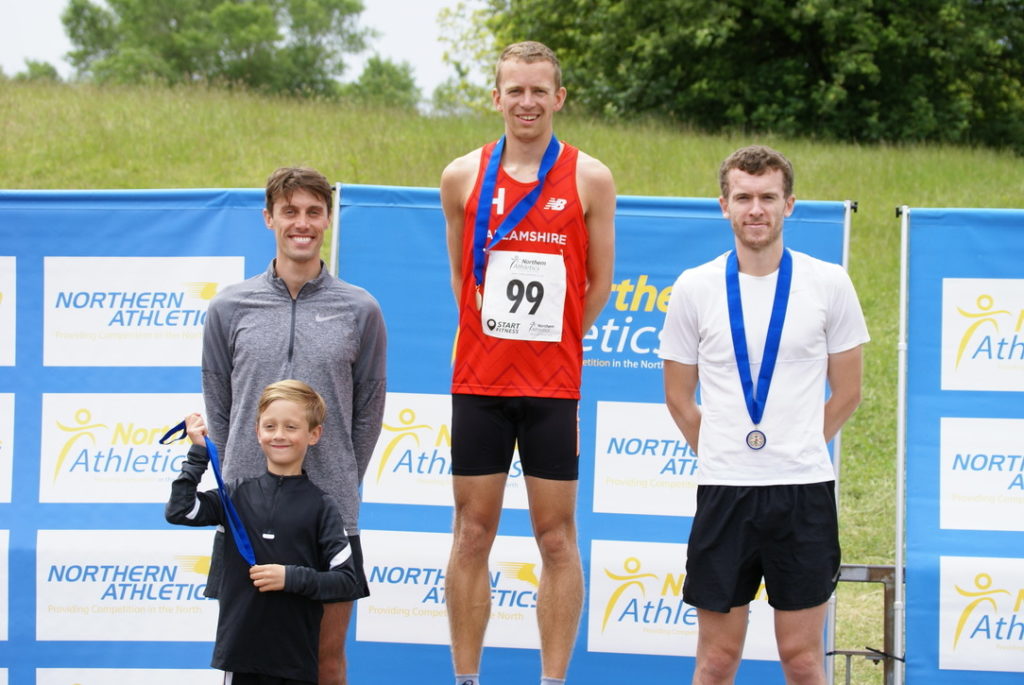 Next up was the U20 Women’s 1500m with Abigail Stratton – who has just qualified for the English Schools Championships in July – this race having 10 athletes in a straight Final. Wirral’s Keira Brady-Jones led the race out which came down to four athletes competing for the Medals. Wigan’s Ava Lloyd came with a real kick finish coming off the top bend in the home straight to take seconds out of Brady Jones and Abigail who finished in the Bronze medal position in a time of 4.38.60. 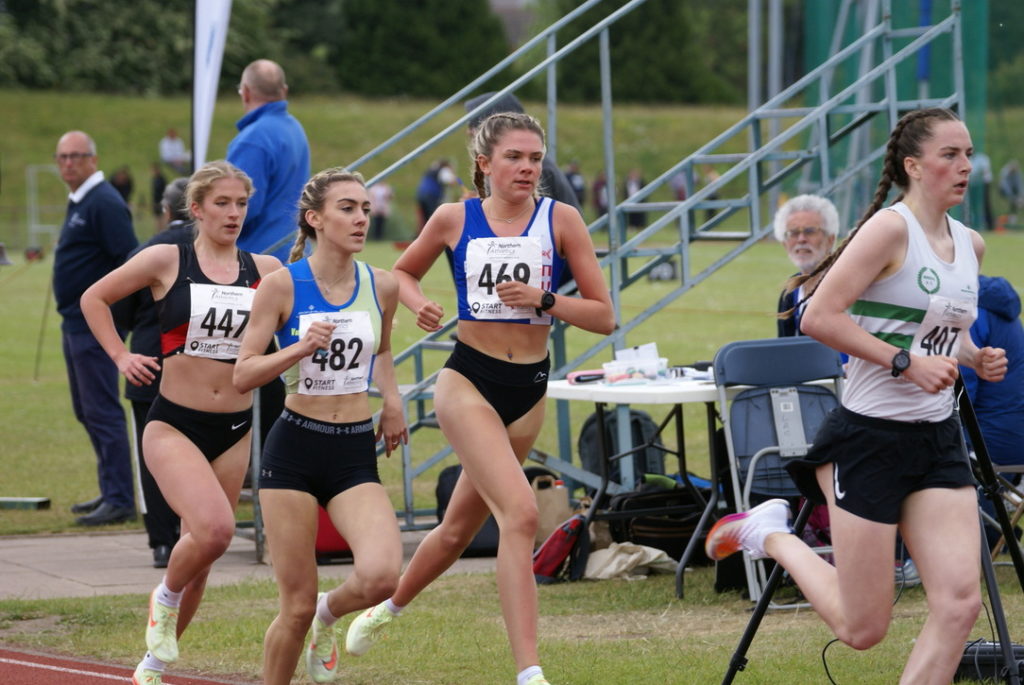 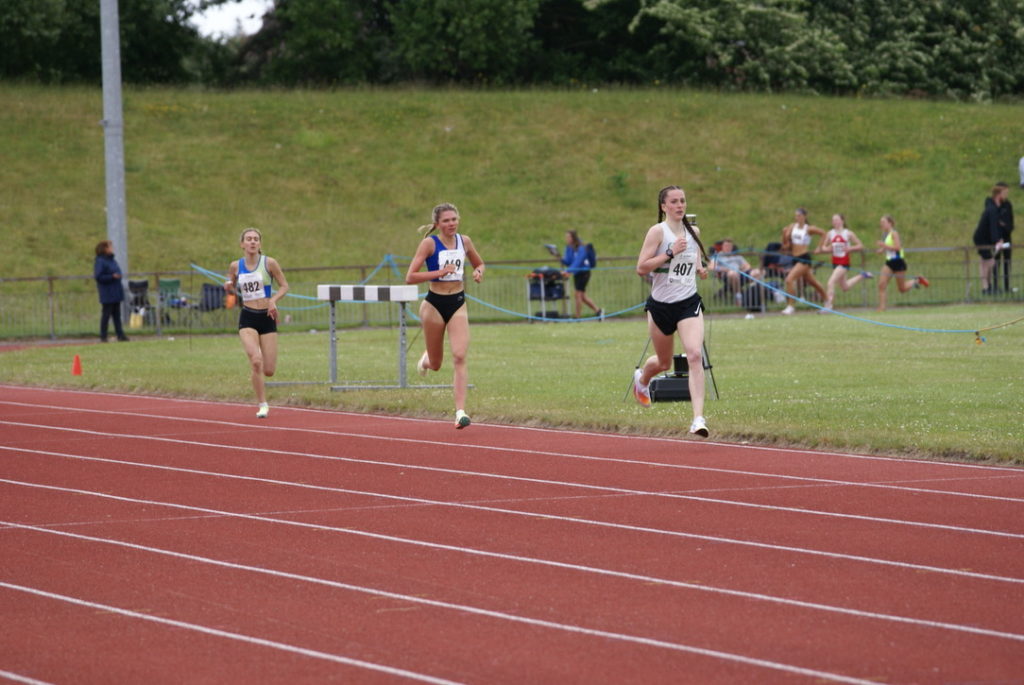 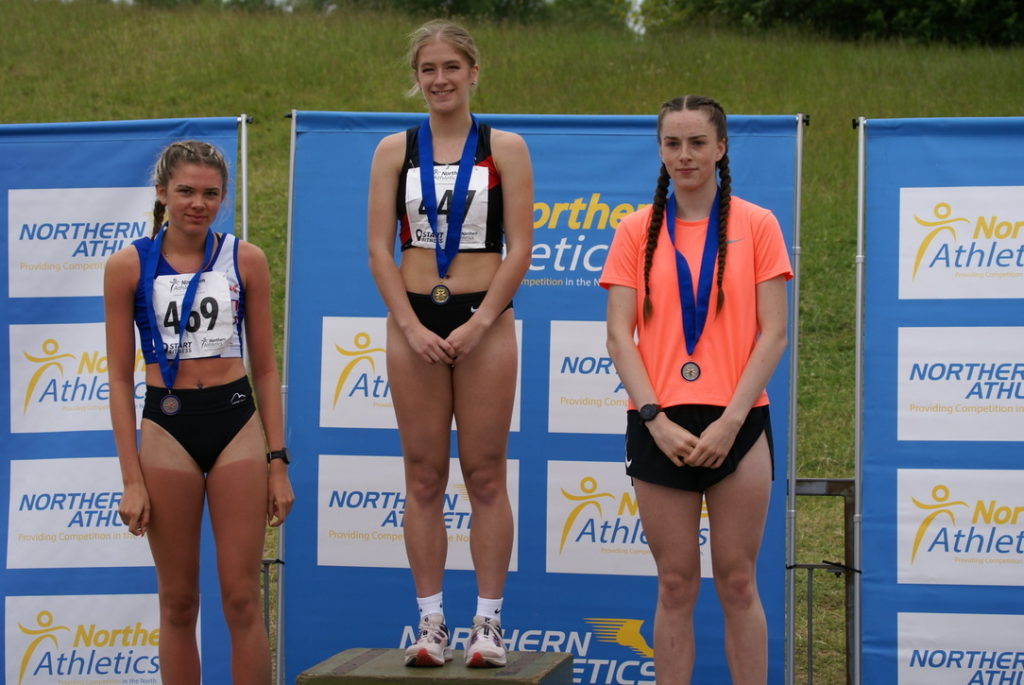 Seventeen athletes stood at the start of the Senior men’s 5000m, which despite the conditions and the tactical nature of these types of races, resulted in the first nine athletes all clocking sub 15 minute times. Two of those were Blackburn Harriers Callum Davidson and Luke Betts. Lap after lap had the field bunched tightly together with obvious reluctance on the part of many athletes in the field to take it on in to the wind as Wakefield’s Mark Bostock did some of the early leading. At the bell David Devine, Cameron Bell, Callum Davidson, Thomas Rogerson, Luke Betts and Mark Bostock were in the leading six places. With 120m to go Devine made a bid, then Callum Davidson before Cameron Bell came through to take the Gold in 14.43.57, with Callum in 2nd (14.44.75) and Luke Betts taking the Bronze (14.47.12), going past David Devine almost on the line. 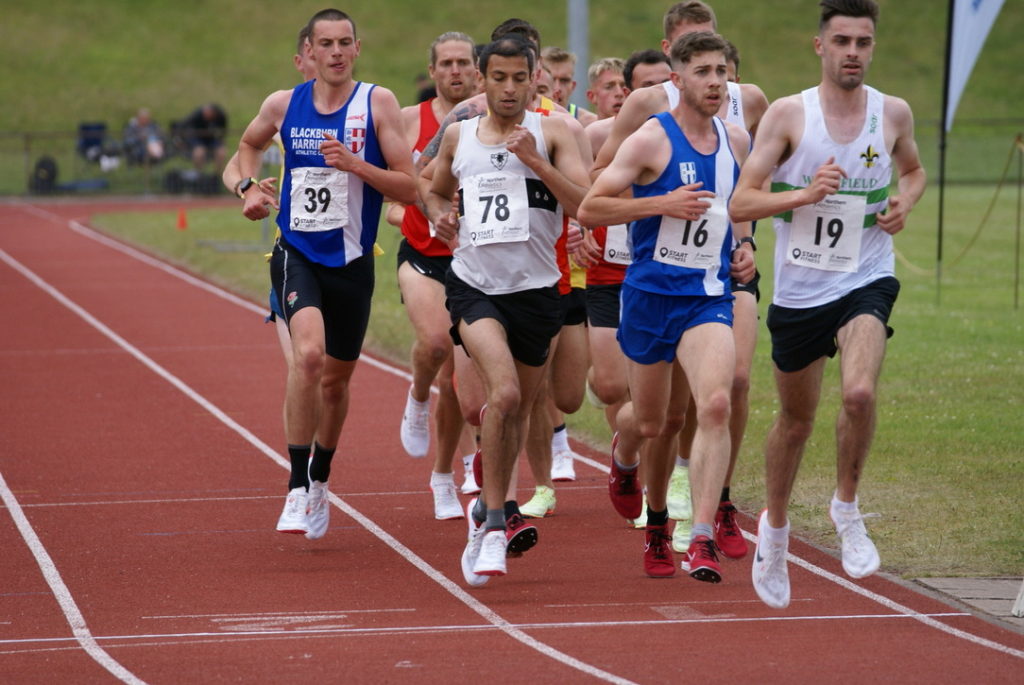 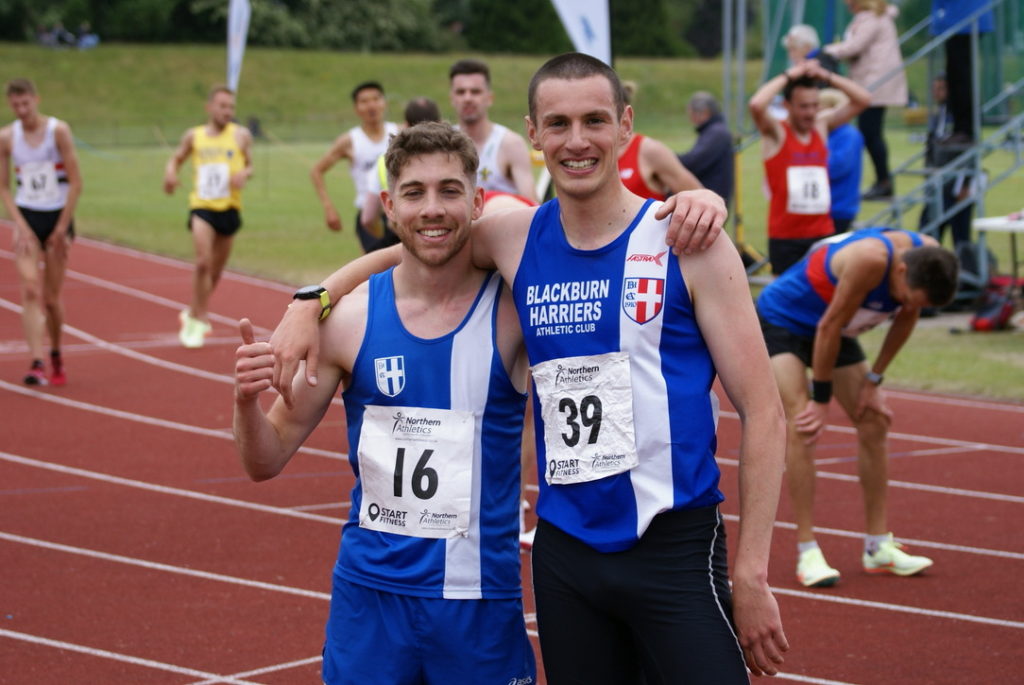 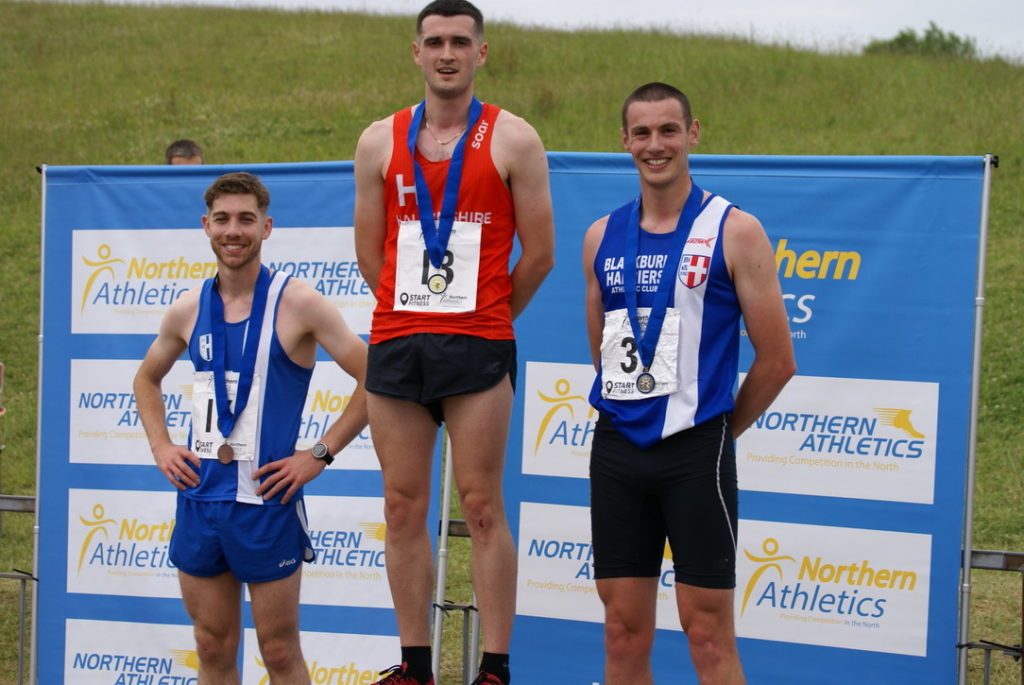 Going into the final event of the day featuring an athlete from Blackburn Harriers – the U20 men’s 1500m – the Club had already won 1 Gold, 2 Silver and 2 Bronze medals. Could David Holman, another of our athletes who has qualified for the forthcoming English Schools Championships, add to the total. Just seven athletes lined up, the race being run just like the previous races over 1500, slow and tactical, the first lap taking something like 76 seconds. With just over 150 to go York’s Shaw, Trafford’s Hopkins, Chorley’s Deacon and David were all in contention and coming off the bend, David went for it to out kick the others, taking the win in 4.11.13 from Hopkins in 2nd (4.11.91) and Deacon in 3rd (4.12.27) and adding the Northern title to his Lancashire title. 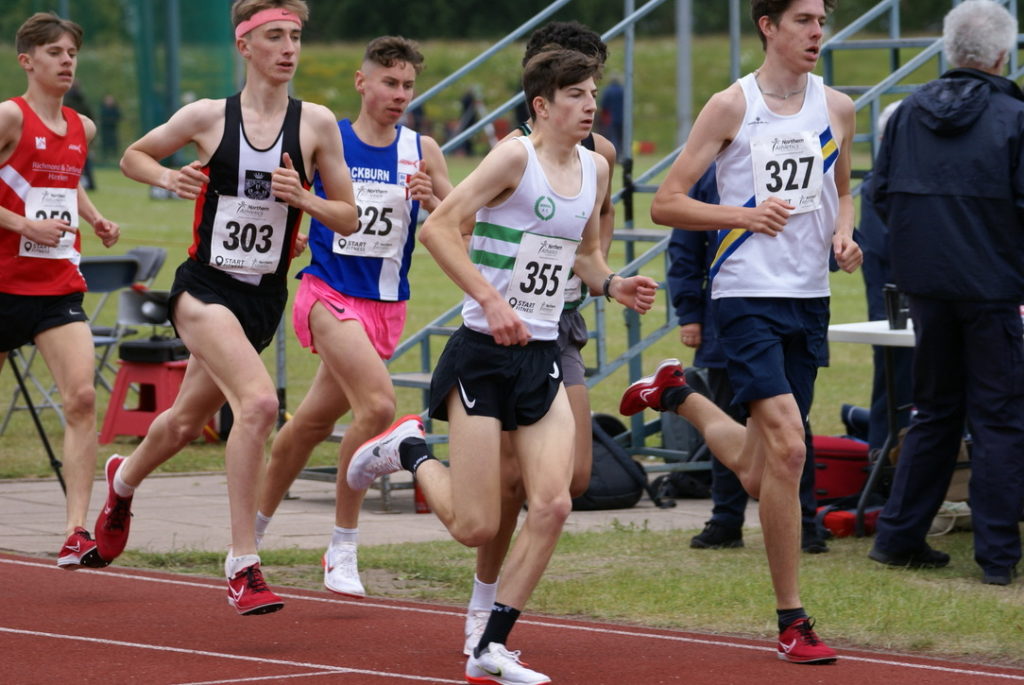 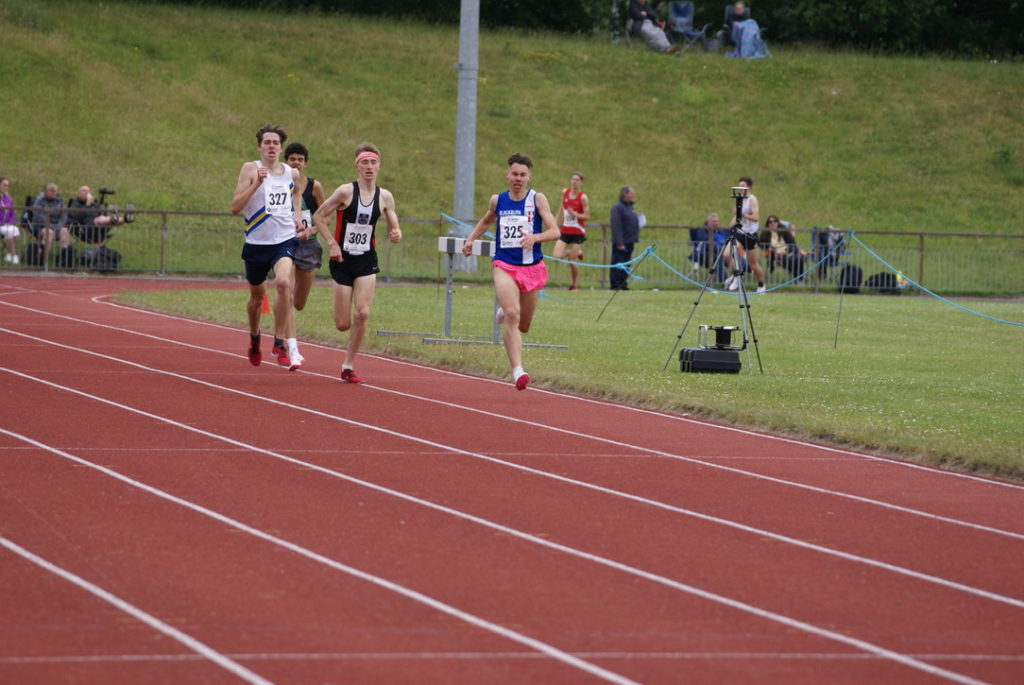 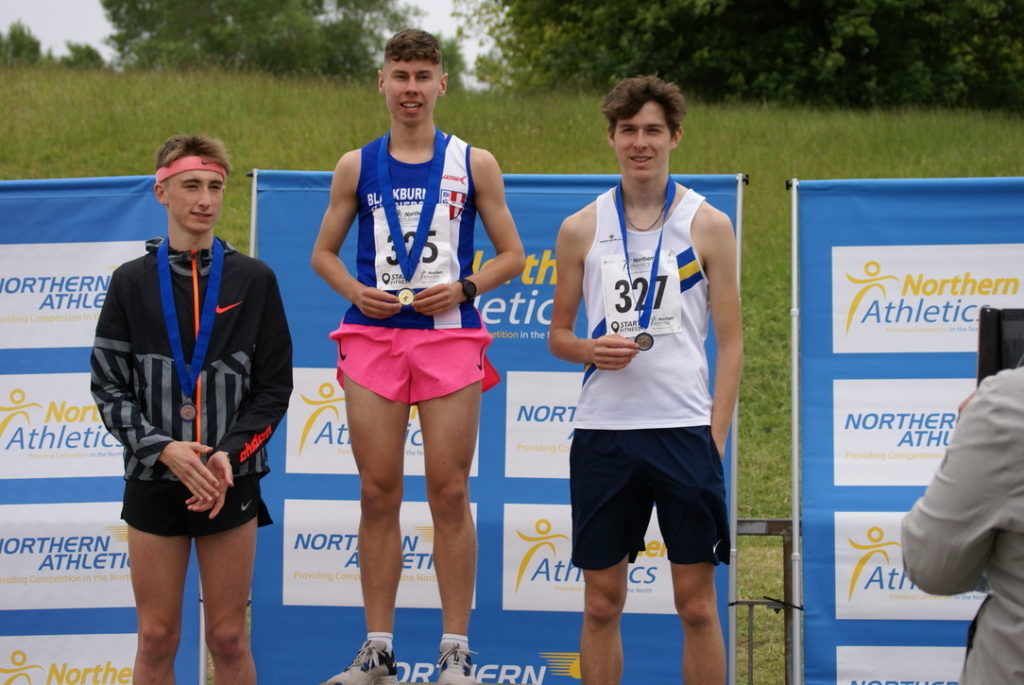 On to Day 2 – had Blackburn Harriers contesting the U20 Men’s Hammer, U20’s Women’s Hammer, U20 men’s 5000m and Senior Women’s Javelin. (Day 2 RESULTS). Matthew Heywood, Emma Harrison and Grace Bontoft all contested the Hammer with Matthew up first in the U20 Men’s having just qualified for English Schools. Matthew went into the Championships with a best of 57.76m and 4th in the National rankings, consolidating that as he won with a new PB of 59.05 in taking the Northern Title from Aaron Holliday in 2nd (48.43m) and Damon King in 3rd (47.49m). Emma has also qualified for English Schools and came into these Championships with a best of 46.93m in 6th place in the National rankings and finished in Silver Medal position with throw of 44.36m. Grace – lying in 23rd spot in the National rankings with 39.84m took Bronze Medal and after taking a fall in the circle, picked her self up and carried on in the event to post a best of 36.99m. 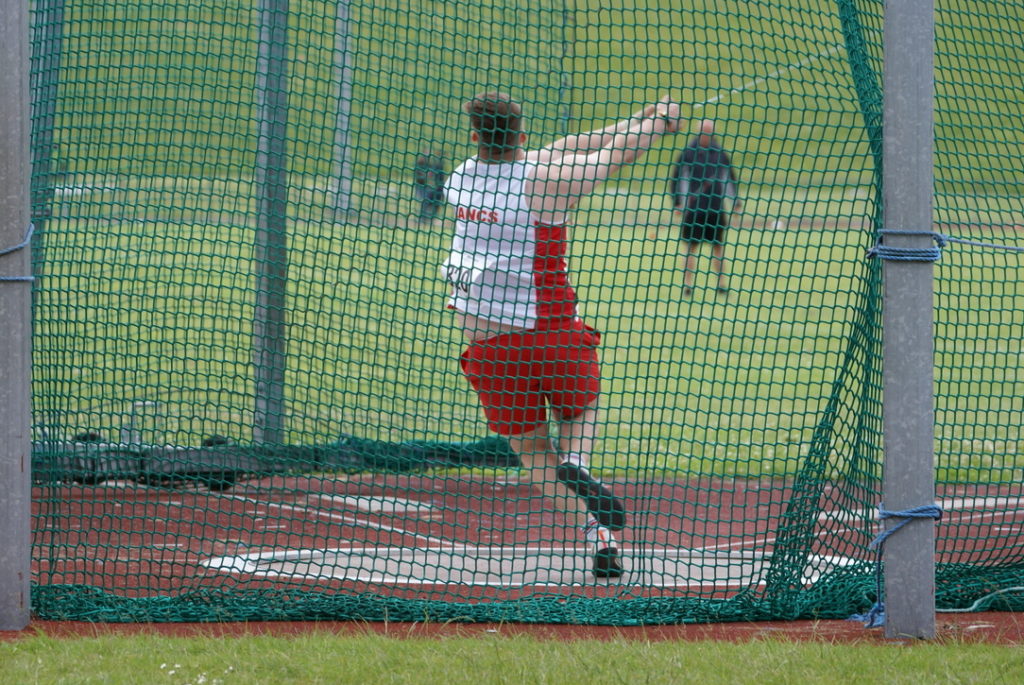 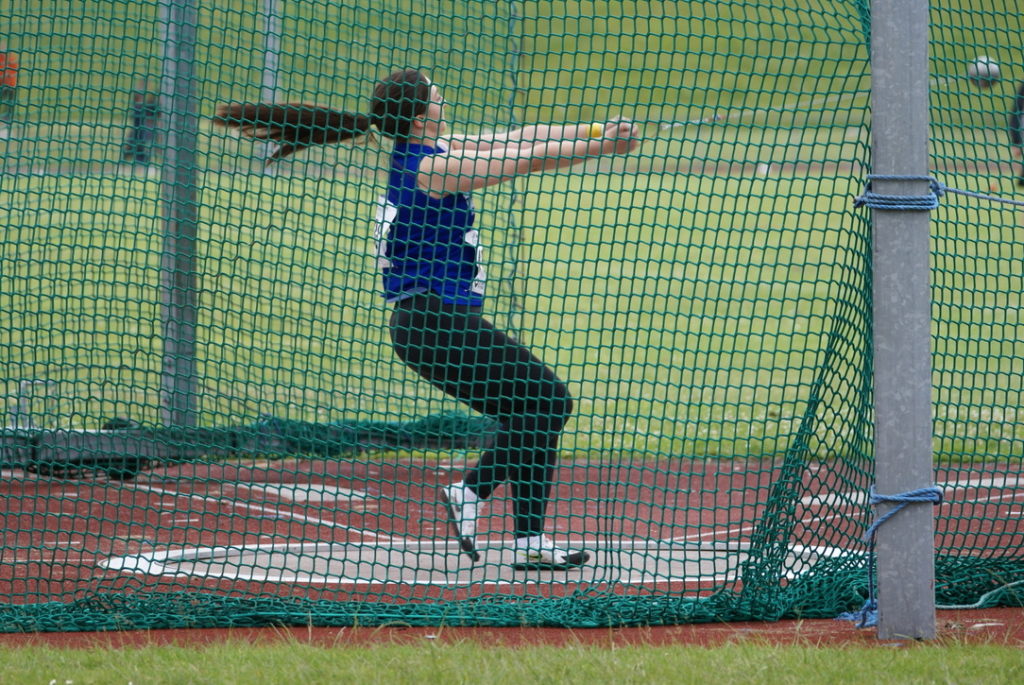 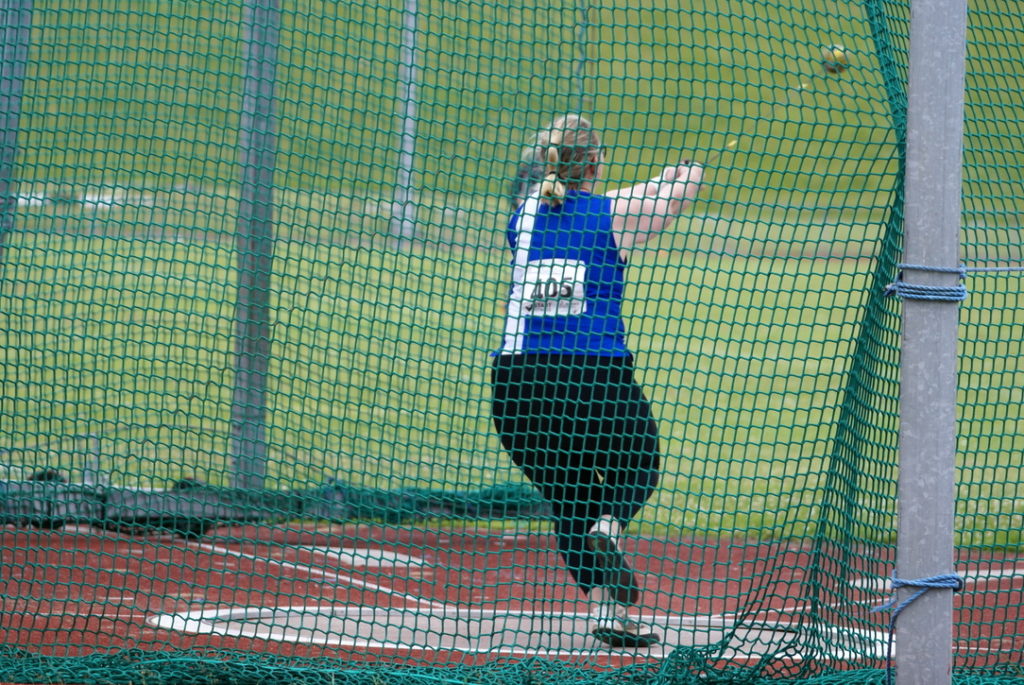 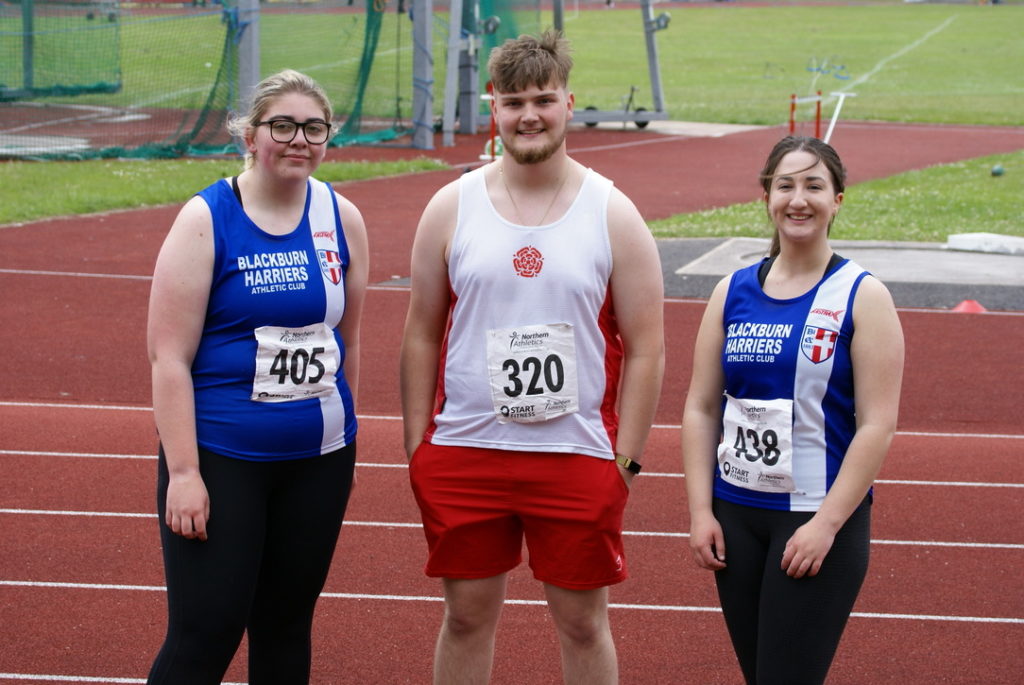 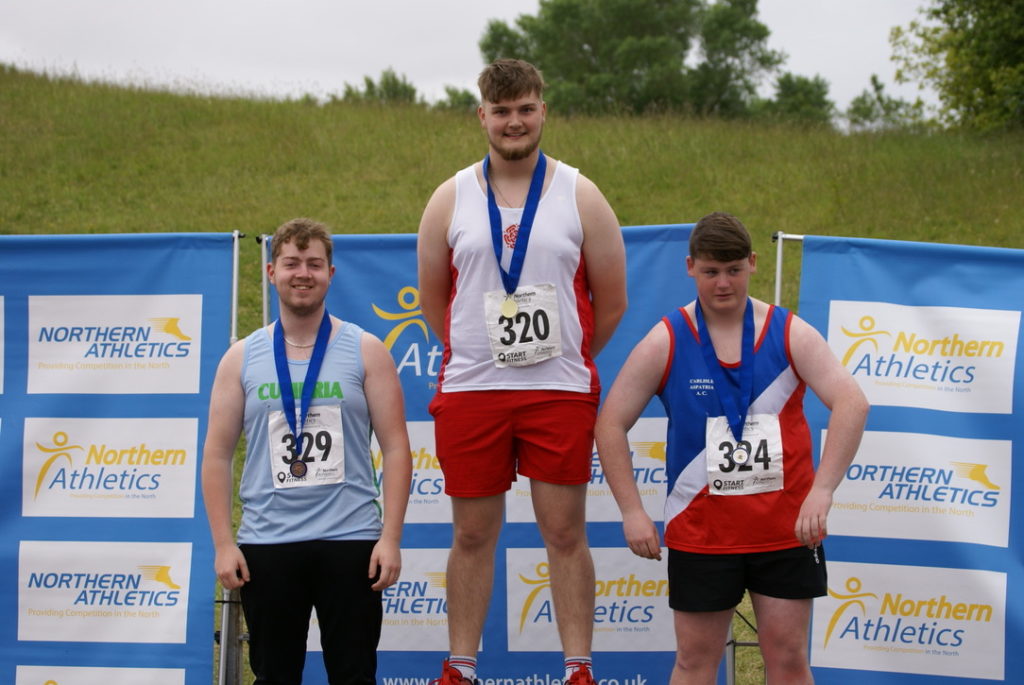 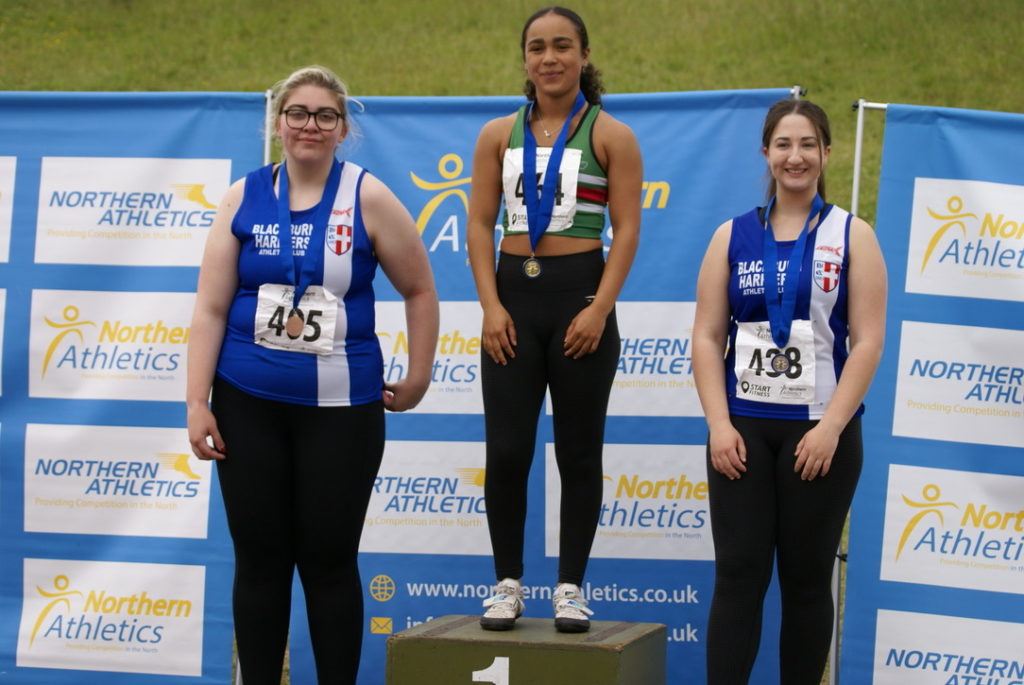 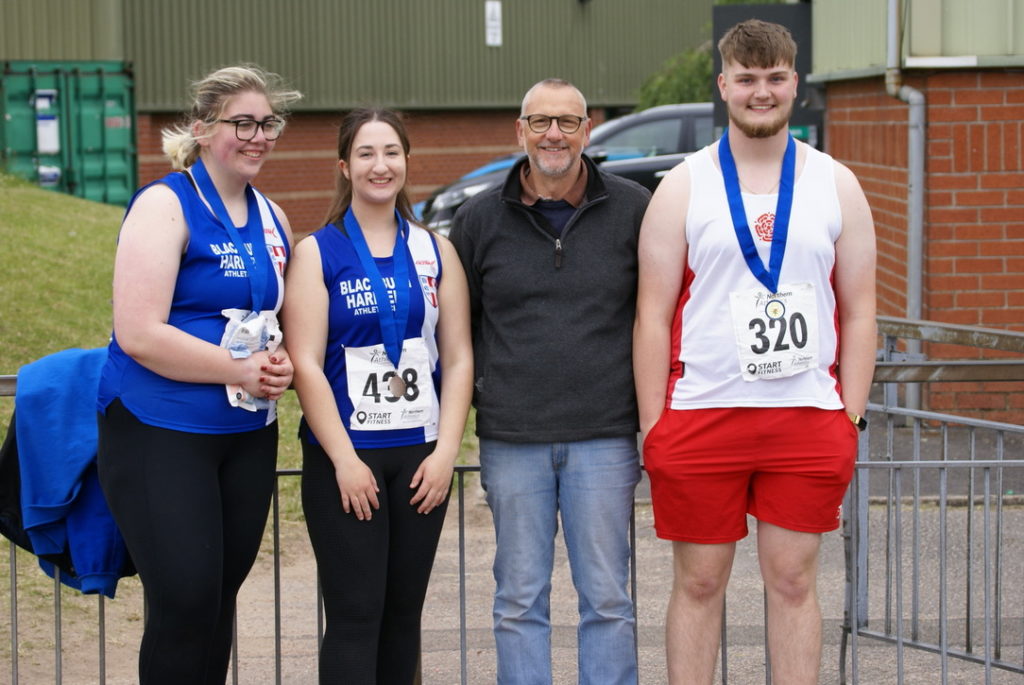 Grace, Emma and Matthew with their Coach Michael Hitchon

The U20 Men’s 5000m race finished up with ten athletes on the start line and among them Blackburn Harrier’s Matt Ramsden who has been in very good form having won the Sportcity BMC Grand Prix ‘B’ 5000m in 14.18.97 and followed that up three days later with an 8.21.16 clocking to win the ‘A’ 3000m at Trafford Grand Prix. Like all the other races over the weekend, it wasn’t going to be particularly fast becuase of the conditions and more tactical than it might be. Chorley’s Jacob Deacon took out the race with a first lap of around 66 followed by a 69, 70, 71 as the pace slowed a touch with everyone bunched togther. With 320m to go, Matt made a break which was covered by Couttie, Giblin and Deacon, however, it wasn’t decisive and with 150m to go, Matt made another effort which Harrogate’s Couttie hung on to making  it a real battle in the home straight – Matt managing to hold him off and take the win in the end by just over a second (14.41.91) with Couttie running a personal best in 2nd (14.43.17) and Giblin in 3rd (14.48.20). 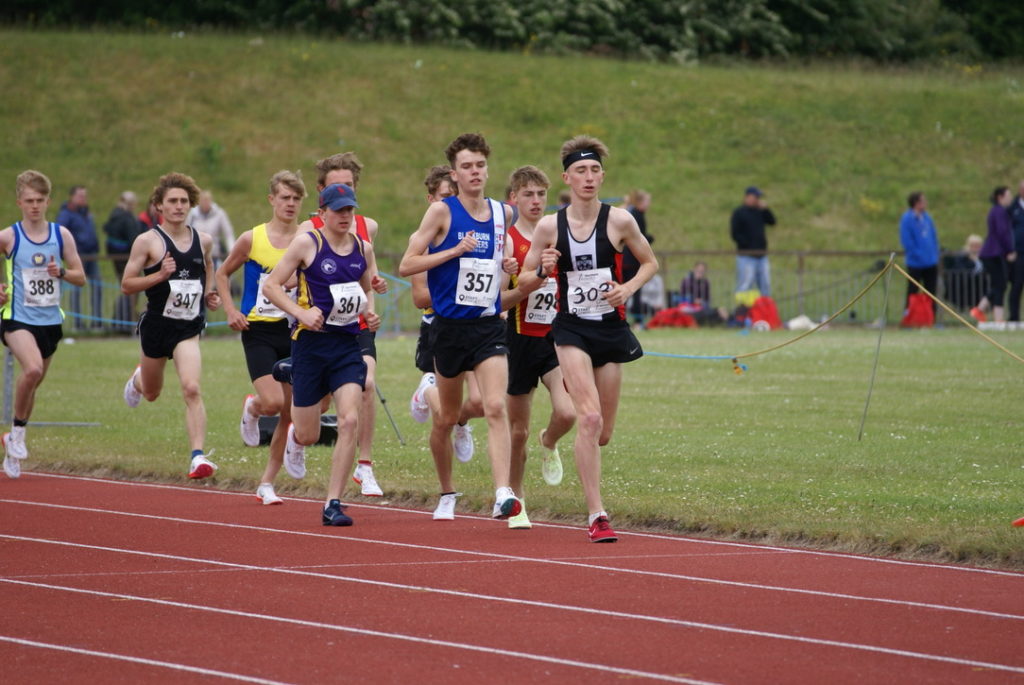 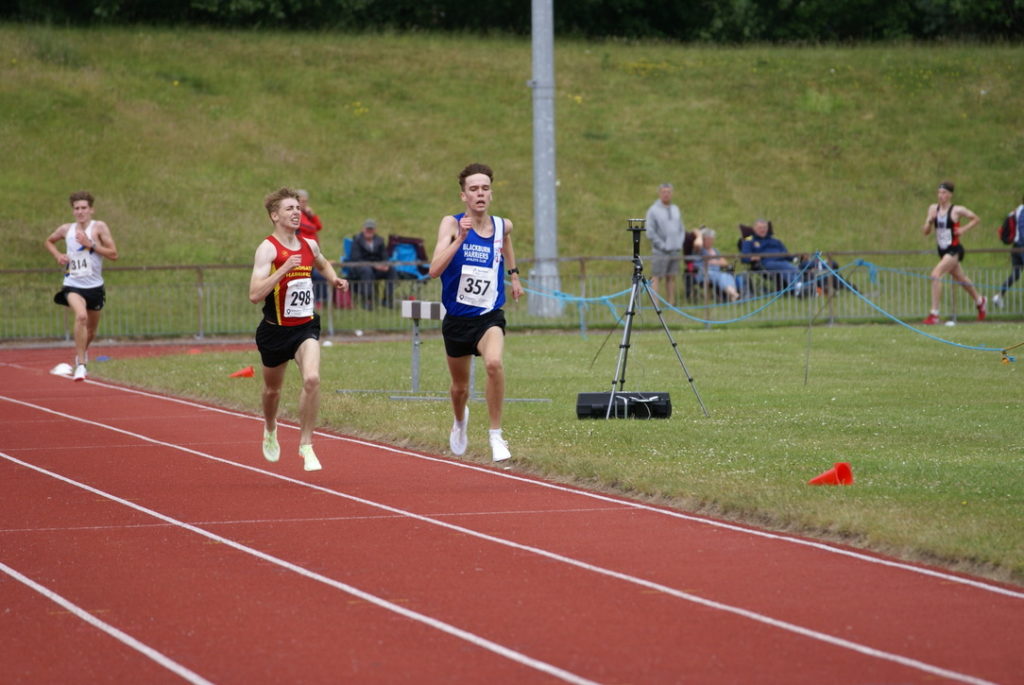 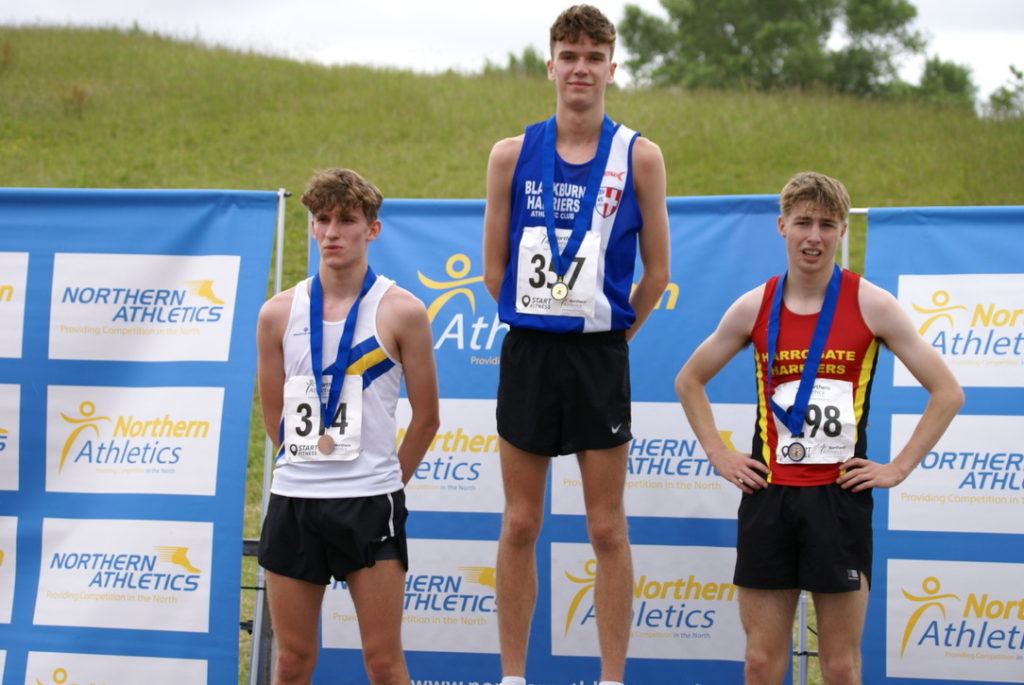 Final event of Day 2 and for the Harriers was the Senior Women’s Javelin with nine athletes taking part – Vikki Adams from Leeds taking the title with a throw of 39.98m with Anna Peers from Liverpool, Pembrooke & Sefton) in 2nd spot (39.17m) and Hull’s Rebecca Chivers in 3rd (36.49m). U23 Millie Coy has only had one competition this year which was for the Harriers in the Northern League (Premier West Division) which she won with 32.69m. In this competition she finished a solid 5th spot with a throw of 32.33m. 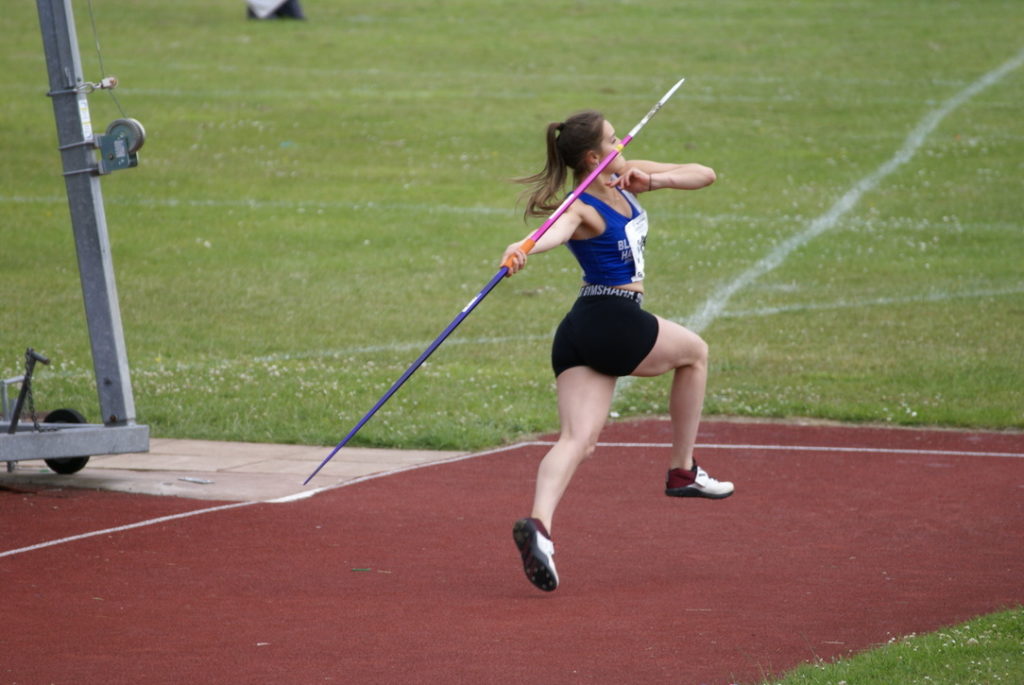