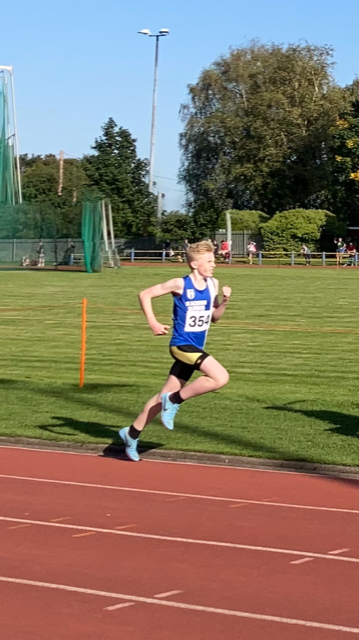 Three meetings this week involving Blackburn Harriers athletes which started off well at the BMC Meeting on Tuesday 15th September for Luke Betts in the 3000m. RESULTS  With just one Track race behind him in 2020 – the first since setting his 3000m personal best in the BAL meeting in June 2019 – Luke took on the 3000m posting a time of 8.32.72 in 2nd place behind – less than two tenths beind the winner – Central’s Hamish Hickey (8.32.58).

His second race of the week came at the Trafford Open meeting on Saturday 19th September where he dropped down in distance to the 1500m.

In this Race, Luke cam home in 2nd spot in his heat, clocking 3.59.44, to end a very good week for him. Quite a number of Blackburn Harriers out at this Open Meeting too, both on the Track and in the Field events, recording some pretty good results between them.

Senior Ben Costello made his debut over the 3000m as Steeplechaser Joseph Howe also took the flat 3000m on for the first time since 2016. Ben had a pretty good run for his first ever outing at this distance, lining up with nine athletes, of whom, all but one went into the race with personal bests of sub 8.45 down to 8.04. Ben placed 5th in the Heat with atime of 8.43.21. After his debut Race, Ben spoke to the Club about the expereince and told us that he was “Very happy with my debut over the 3000m it was my first time at a open meeting so I didn’t know what to expect. My plan was to go out at 70s and try and hold it the first kilometre was slightly quicker than planned but managed to hold on for the remainder of the race going to have another crack at the next 3000m on the 3rd October and hopefully get down towards the 8.30 barrier than I’ll have something to work off for next season.”

A couple of Leeds athletes dominated Joe’s Heat with 9.06.40 and 9.10.58 in first and second place. Joe went into the race with a personal best of 9.19.77, having not had a race of any sort since the BUCS Cross Cuntry Championships on February 1st, so his 8th placed finish of 9.45.81 was a solid performance. He was also happy with his Race commenting “I was actually quite happy with it. I was hoping for faster but I can’t complain considering I’ve only been training for about a month now. I’m happy with how the running’s going at the moment and hopefully I’ll be able to get another race in before the end of the season. 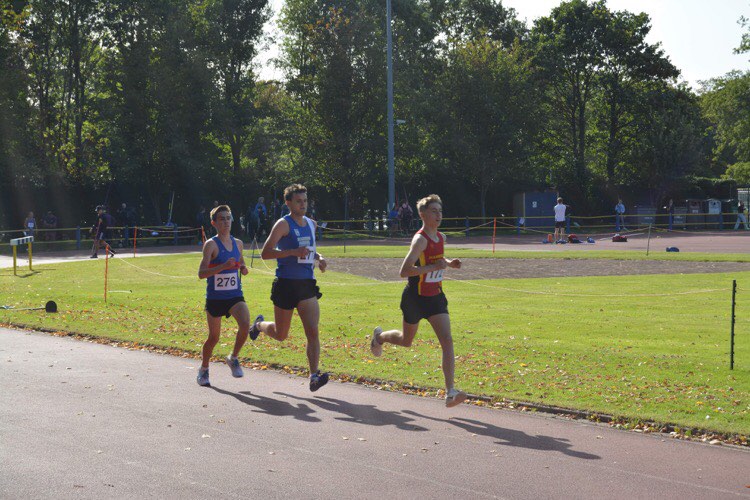 First year U17 George Whittaker is making the very most of the short period of racing that has been available to the athletes after setting 100m (12.36) and 200m (24.89) personal bests so far. Going up in distance, George took on the 400m with his previous best of 61.0 run in the Mid Lancs League in June 2019. Today he smashed that to pieces with a massive new PB by over 4 seconds to win his Heat in a time of 56.62 with Stockport’s Louis Briscall-Slack in 2nd (58.84). Bottom of age U17 Hayden Mercer also entred the 400m, his first race over this distance since August 2019 after having only raced three 800m races this year. He didn’t disapppoint and kept the personal bests going as he clocked a new PB of 55.02 in 4th spot in his Heat, won in a time of 53.20. His efforts over the 400m had an impact as he doubled up to take on the 800m, placing 7th in a time of 2.10.96 which was well outside the times he has been running. 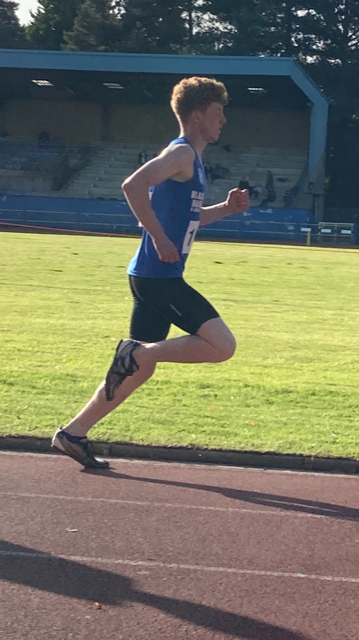 First year U15 Ben Stratton was on next in a Heat of the 800m. This was Ben’s first outing this year on the Track, having last raced over 800m in August 2019. new territory for Ben over this distance with his speciality being the 1500m where he posted a personal best time of 4.44.26 in May of 2019 which saw him finish the season ranked nationally 29th in the U13 age group category. His 800m personal best going into the Race was 2.36.17 which he literally destroyed by twenty seconds, as he won the race with a devestating finish in a new PB time of 2.16.44 from Wirral’s Harry Hollis in 2nd place (2.17.10). 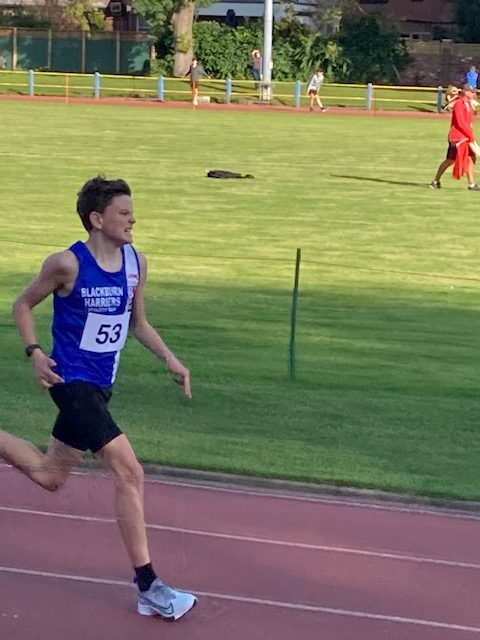 Bottom of age U17 David Holman had run just three races going into this Open meeting recording two wins in 800m and 1500m along with a 4th placed 1500m, all of had which resulted in new personal bests. Today was his second 800m race this year, the first of which saw him reduce his personal best from 2.24.6 all the way down to 2.12.50 which was a pretty impressive performance. Once again David set a new PB, this time reducing it by a further four seconds as he finished 2nd in 2.08.23 behind Trafford’s Matthew Russell (2.05.81). 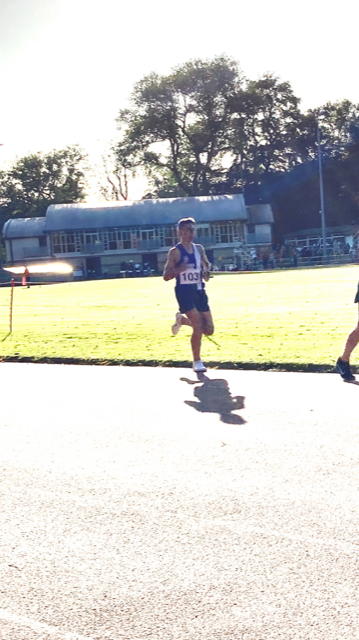 U20 Joe Gebbie was just outside his personal best of 1.59.0 in his 800m Heat where he placed 6th in 1.59.76. Ever positive and always analysing his Races, Joe told the Club afterwards that he was a “Bit disappointed as I thought I was in PB shape but it wasn’t to be. I was in Lane 6 and with not having a view inside me ended up leading at the break and right through to close to 600. Couldn’t kick enough and lost a good few places. Happy to be the right side of 2 minutes though and in touching distance of the PB.“

U13 Matthew Smith had a stormer in his 800m Heat. His first 800m race since competing at Sheffield in the Harriers team at the UKYDL North Area Plate Final in July 2019, saw him chop two seconds off his previous best to win the race in a new PB time of 2.22.41. In the next 800m Heat – U15 Codie Dewhurst was competing in only his second track race of the year and the first since August 2019, and what a start he has had. In his first race he set a new personal best of 2.29.16 which was a half a second improvement and today, in placing 2nd with a further improvement of nearly three seconds, he clocked a new PB for himself of 2.26.27.

U15 Keira Haxton ran a Heat of the 1500m – finishing 2nd of the three U15 Girls in the Race – and recorded a huge10 second improvement from her first race of the season as she clocked a seasons best of 5.17.25 in 5th place in her Heat, which was even better as she had experienced a headwind and still felt strong. First year U17 Abby Stratton was fractions outside her 1500m personal best in finishing 7th in her heat with a time of 4.43.23, having already set a new personal best of 4.42.55 in her last 1500m race, just two weeks ago. Also in the 1500m was U120 Ben Makin who kept the new personal bests coming with his 4th placed time of 4.11.38 – a new PB by two and half seconds. 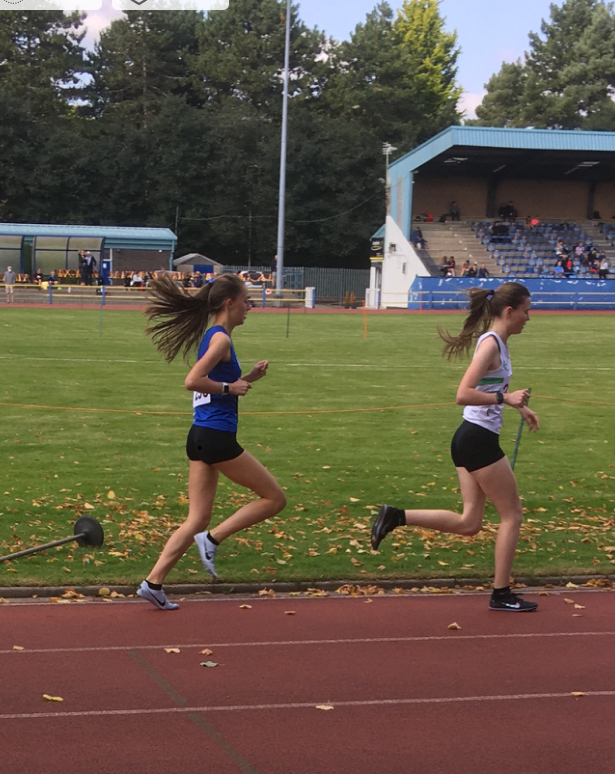 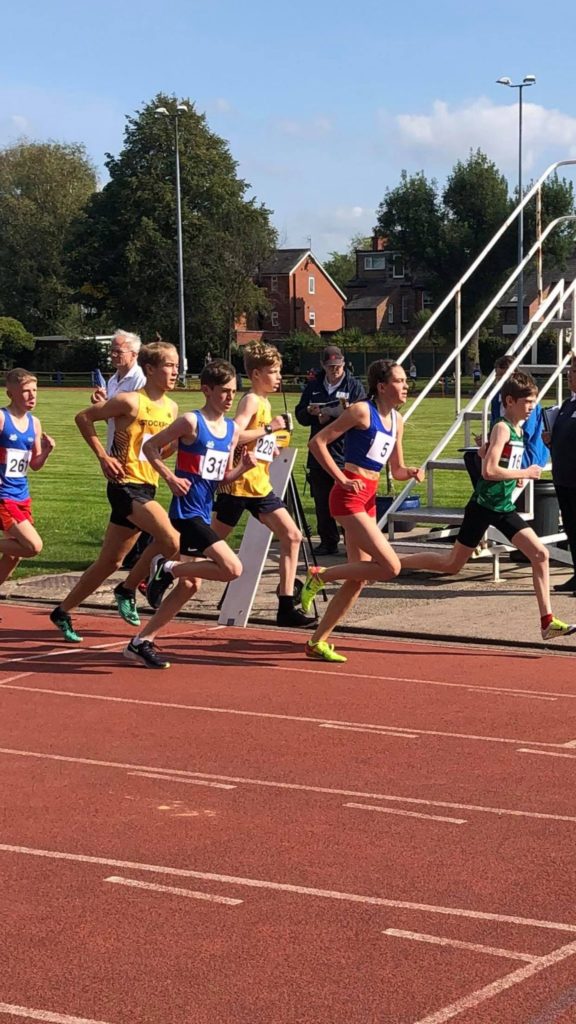 In the field events it was a pretty good day for the Harriers as six athletes competed in the Hammer and Javelin and took first place in them all.

In the Hammer U17 Matthew Heywood in only his third Hammer (5kg) competiton in the whole of 2020, threw a seasons best 49.65m to take the win. Bottom of age Sebastian Burton hadn’t thrown a Hammer since August 2019 as an U15 which is a 4kg weight. Moving up to U17 saw him take on the 5kg weight, producing the second win of the day for the Harriers Hammer Throwers with a distance of 24.33m. Making it win number three on the day for the Hammer was first year U20 Ava Leigh who threw a new PB with this weight (4kg) of 44.42m in 1st place – an improvement of some six metres from the one previous time as an U17 when she competed with that weight.

On to the Javelin and George Whittaker (U17) was on a roll on the day. Having set himself a new PB in the 400m which he won, he then went on to set a big new PB with the 700g Javelin by over six mettres to place 1st with 36.52m. Senior Anna Peers then made it two wins in the event as she placed 1st with a seasons best distance of 38.22m with first year U20 Millie Coy making it a hat-trick of wins in the Javelin with a distance of 34.20m.

Two Blackburn Harriers ran in these which saw Tim Raynes take on the Sub 30.00 minute Race and Annabel Ralph the Sub 37.30 minute race. Twenty one athletes took part in the final race of the night which was Sub 30 minute targeted. The first three home clocked sub 29 minute times, followed by five sub 30 minute clockings, ten Sub 31  and two sub 32 minute times. The race was won by Leeds athlete Emile Cairess in 28.46 from Central’s Jamie Crowe in 28.48 and Cardiff athlete Jake Smith in 3rd (28.50). Tim went into the race with a personal best of 30.46 and was just three seconds outside of that as he came home with a time of 30.49, telling the Harriers after the Race that he “had been planning to do the relays on Sunday but, after they were cancelled on Thursday, managed to get a late entry to run at Podium instead. Only just started building up my mileage and doing more 10k specific training but, with the ever-changing Covid situation, thought I’d give it a go. Conditions were windy, although they had improved by the time I raced. I was on the back of a pack for about the first mile, but then became isolated for much of the race. Managed to dig in and focus on picking off runners ahead of me. Overall, pretty pleased to run just a few seconds outside of a PB. I’ve entered Cheshire 10k in four weeks time, so hopefully will be able to go for a PB there.”

Annabel Ralph ran a seasons best time of 36.20 which was seven seconds faster over the distance than her last outing way back on March 1st this year. Just two women athletes in this race with Shettleston’s Avril Mason clocking 36.05. Post Race Annabel commented to the Club that it was her “First 10km race since March so it felt good to race this distance. I believe I could have ran it quicker as I set off way too fast and it was windy, just need to start racing more consistanly to help me develop race craft.“ 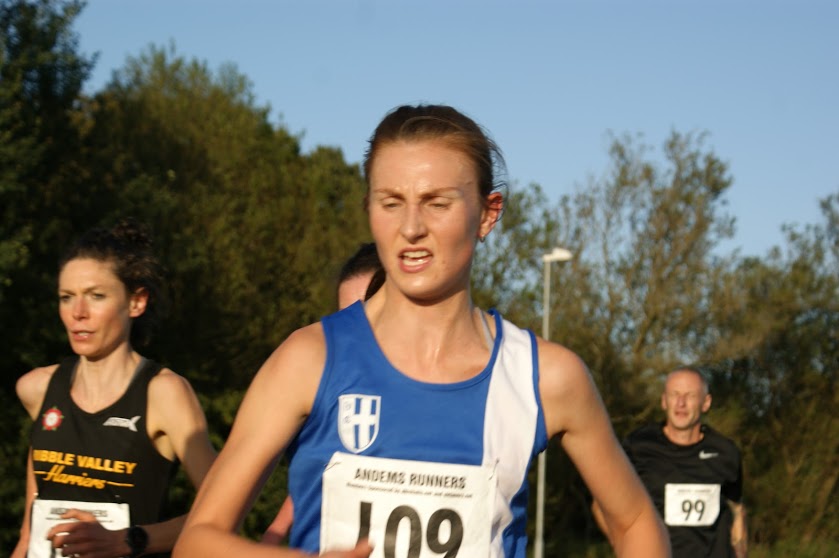