Gold, Silver and Bronze Medals for the Harriers at Northern Championships – Holly at Muller Grand Prix – PB for Jacob at Podium – Ben & Victoria Win Burnley & Pendle Individual Series Titles – Karl’s in the Mountains – On the Fells with the Harriers – Annabel back racing in 2nd spot 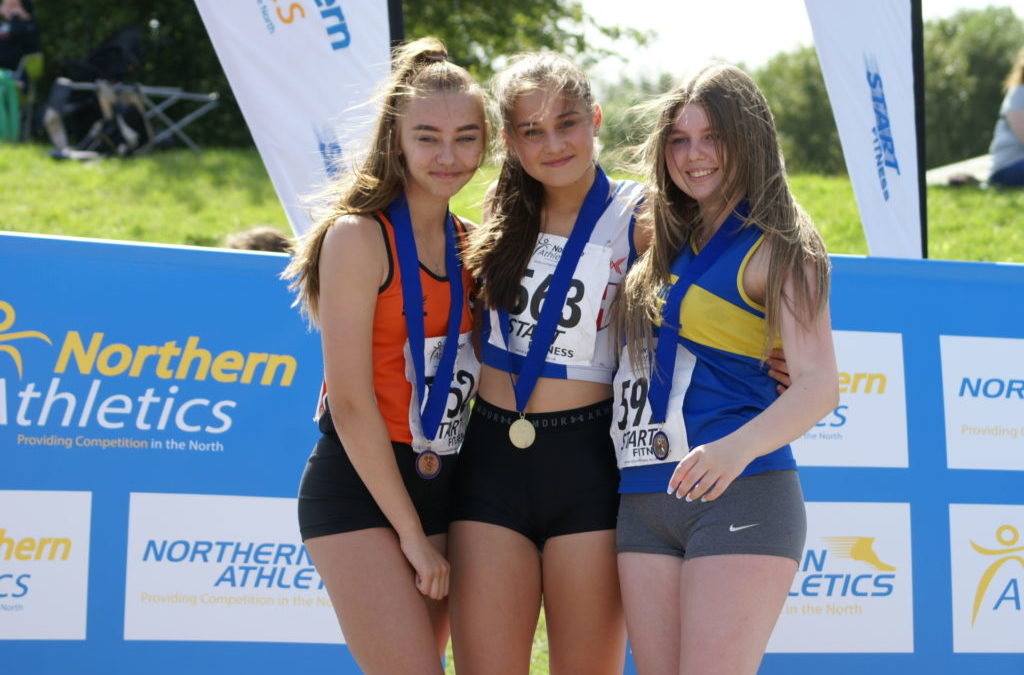 Wavertree Athletics Track – home of Liverpool Harriers – was the venue for this years Northern T&F Championships for U13/U15/U17 age groups, held as it was with a wind that dominated both days competition.

Blackburn Harriers athletes were amongst the Podium winners winning two Gold, three Silver and two Bronze Medals. U15 Jayden Riley continued his excellent season where he is currently ranked 8th nationally over 100m (11.3) and 11th in the 80m Hurdles (11.69) by winning the Northern Gold Medal in the 100m. There were three Heats which saw Jayden qualify for the Final with the fastest time of all three in 11.87 before going on to comfortably win the Final in a time of 11.94 into a minus 3.6 wind with Wirrals Kaleb Legall in 2nd (12.23). Jayden was delighted with his result and told the Club “Another great experience was achieved as I have been able to win at the Northern Championships. I am now looking forward to what comes next in my upcoming races”.

Training partner Ben Boocock was also among the Medals as he took Silver in the U15 Boys 80m Hurdles clocking 11.94, an agonisingly six one hundreths outside first place. Ben spoke to the Club after being presented with his Silver Medal commenting “I’m pleased with my time of 11.94 considering the blustery conditions. I was a bit disappointed as I really wanted gold, so I’ll keep up the training so I’ll be ready for the Northerns next season“.

Millie Coy had a great day at the Championships in the U17 Women’s Javelin adding over a metre to her previous best to take the Northern Title and Gold Medal with a new PB distance of 38.71m in a closely fought contest with Southport’s Megan Haworth in 2nd place (38.04m) and Blackpool’s Kacie Calvert in 3rd (31.55m). 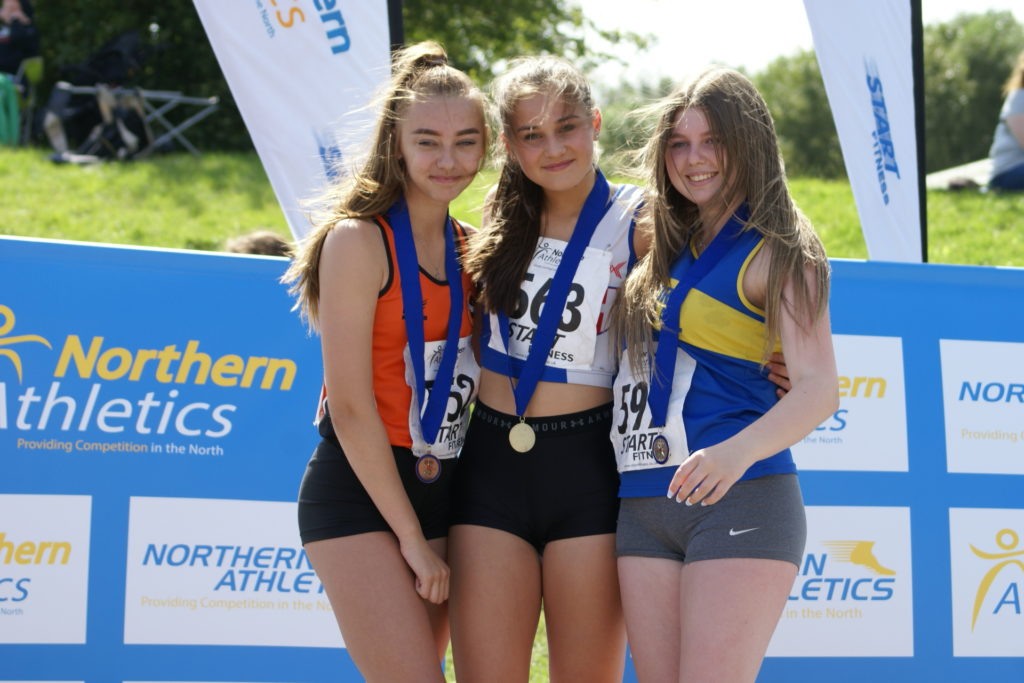 Matt Heywood entered the U17 Men’s Hammer and Discus winning a Bronze Medal in the Hammer with a distance of 45.72m before placing 8th in the Discus with a throw of 26.68m.

U15 Nicky Saunders was just outside her personal best in the Javelin – on Day 1 – throwing a distance of 25.46m to come in 10th out of the 17 finalists. On Day 2 Nicky was joined by Grace Bontoft in the U15 Girls Hammer with Nicky throwing 34.15m for 5th place in the and Grace placing 8th out of the 12 strong competition with a distance of 28.32m.

Matt Ramsden came within two tenths of the Gold Medal in the U17 men’s 3000m. In a race badly affected by the strong wind, the athletes stayed together for the first five laps with the front six starting to break away on lap 6. At the bell there was a move by a few athletes and with 300m to go Matt Ramsden took it on, opening up a 10 metre lead as he went for the finish into the wind. Border Harriers Scott Nutter didn’t give it up and kept closing the gap down the home straight to just take the title on the line in a time of 9.17.94 with Matt in Silver Medal position (9.18.18).

U15 Hayden Mercer and U17 Eleesha Charnley contested their respective 800m events. The U15 Boys had three Heats with Hayden qualifying from Heat 1 with a time of 2.09.37 along with the three athletes in front of him. In the Final Hayden ran 2.11.59 to finish in 6th place. Saul Sharp also ran in the Heats and clocked a new PB of 2.24.95 which was even better given the wind. The U17 Women’s 800m was surprisingly made into two Heats with just nine athletes in total which meant that with 8 to go into the Final – one athlete would miss out. Eleesha qualified from Heat 2 in 2.29.45, placing 7th in the Final with 2.36.35.

Holly Bradshaw was competing in a badly wind affected Pole Vault competition in Birningham at the weekend along with other world class pole vaulters – Stefanidi, Silva Nageotte – as they all prepare for the forthcoming World T&F Championships being held in Doha in October. Holly who went off a shorter ten stride run up because of the conditions, cleared 4.55m to place 6th overall. Nageotte was quoted on Twitter “Today was one of those days you’re happy to walk away injury free. The Birmingham head wind was the true winner. Congrats to every vaulter that cleared bars today!“

Three Blackburn Harriers ran in the ‘A’ Race with Ben Fish the first across the line in a time of 15.00 (5th) followed by Jacob Watson who set himself a new road 5k personal best, clocking 15.40 in 16th spot with Ben Costello just behind in 19th place running 15.49. After the Race Jacob said he was delighted with his new PB telling the Club “Surprised myself tonight, I knew I’d be able to run close to my PB but I’m really happy to knock 6 seconds off it. Thankfully I managed to tuck behind a few runners on the early laps to guard myself from the wind! Well done to all Harriers tonight, a great club to be a part of!” Ben Fish commented on his race “Well done to Jacob on his pb, top run. I found it a bit tough, it was a solid run but nothing special”.

Karl Billington joined a number of his friends in tackling the Sierre Zinal race in the mountains described as ‘One of the world’s most scenic mountain running trails, Sierre-Zinal has been hailed as the “New York Marathon” of mountain races. It is also the oldest of the kind in Europe’.

Also called the “Race of the Five 4000m Peaks”, Sierre-Zinal heads along a daunting 31 km mountain trail involving a 2200 meter elevation gain and a 1100 meter vertical drop in the heart of the Valais Alps. The ingredients that lead to Sierre-Zinal’s enduring success are the stunning scenery, the warm and genial atmosphere, and the overall superb organization of the event. It stands out among the world’s most famous mountain races for good reason!

“As a mountain racer you must experience the tradition and history of this race.” These are the words of Jonathan Wyatt, a record holder of Sierre-Zinal, the Jungfrau Marathon and many other world-famous races.

The Race was won by the world famous mountain runner – Kilian Jornet – in a time of 2hr 25.35, just a minute in front of 2nd placed Petro Mamu. Karl finished in a time of 4hr 46.54 and commented after the race had finished “It is advertised as one of the toughest mountain races in the world, and it didn’t disappoint. It was an unrelenting course where the climbs just didn’t seem to stop. I went out there finish and enjoy the experience, I can’t say I’ve ever done or will do another more scenic race”.

On the Fells with the Harriers

John Orrell was back out on the Fells again for the Harriers taking on races at Hellifield, Farelton Knott and Arncliffe in pretty quick succession. First race up was Hellifield on August 3rd which was a 5.6k race with 260m of climbing and won by Wharfedale’s Harry Coates in 24.59 with John 38th in 39.34.  Hellifield Results

Next up came Farleton Knott on August 4th run over a distance of 4.5 miles with1200ft of climbing. Mercia’s Simon Bailey won this race (34.39), as John came home in 58th spot in a time of 62.43. Farleton Knott Results

Last race in this period of a week came at the Arncliffe Gala August 10th – won again by Mercia’s Simon Bailey in 11.19 with John coming home in 64th spot out of the 123 strong field in a time of 17.40. Arncliffe Results

A rest for a week and it was then the Pendle 3 Peaks Race on August 17th which saw John joined by Mark Wilkin and Daniel Whittaker for the Harriers featuring one hundred and thirty eight runners. V50 Mark Wilkin was first home in 75th place clocking 2hr 02.32 with V50 John Orrell next through the line (92nd) in 2hr 09.10 with V40 Daniel Whittaker – who as an U20 athlete clocked PB’s of 10.8 and 22.00 for the 100m/200m – coming home in 108th place (2hr 17.38). John commented on the day saying “A shower of rain just after the start put thoughts of a grim day out in my head, but it was not to be and soon Pendle was covered in glorious sunshine. A steady start as I knew what was to come. A tough climb up Ashendean Clough, then The Big Dipper of Mearly Clough. Saving some for the Big End I seemed finally to get my climbing legs back. It’s been a while! Up and over the top, past the trig and home free. ‘Easy’!!” 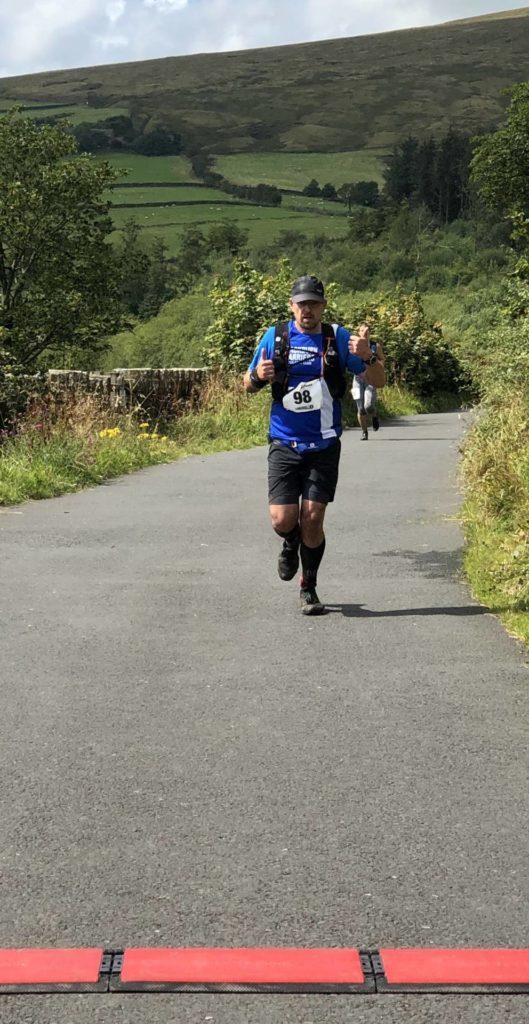 After a lay off due to injury, Annabel Ralph was back out racing at the weekend and this time on the Fells at the Tour of Norland.

The Organiser of the Race describes it thus….The Tour of Norland Moor is more like a trail race than a fell race and is a great introduction to fell running. All the hard work is done at the start as the race climbs up North Dean Road (a rough paved bridletrack). Starts/finishes from the excellent facilities of Copley Cricket Club. A 10k race with 270m climb. Minimum age 18 years. Category BM.

Cambridge & Coleridge athlete – Graham Anderson – was the overall winner in a time of 39.16 with Annabel Mason the first woman in 12th place with a time of 44.52. Annabel Ralph had a very good run just behind Mason in 16th spot clocking 45.55.