Tremendous scenes in Dublin at the weekend at the European Cross Country Championship with an estimated 10000 animated spectators cheering on every race. This prupose built course allowed spectators to run from side to side during the race to catch the athletes and a number of vantage points on each of the laps, all of which made for great involvement and entertainment.

After winning selection by winning the Trials at Liverpool in a decisive manner, Blackburn Harriers Jess Judd showed how good she is again, having another tremendous run. Right from the off she showed her determination to stay with the lead pack, just missing out on a Podium finish finishing up in 4th place (27.01) for the 5 mile course behind the winner Karoline Grovdal (26.34), Silver Medalist Meraf Bahta (26.44) and Bronze medalist Alina Reh (26.53). Great packing by the British team saw them take the Gold Medal with Jennifer Nesbitt placing 10th (27.58), Jessica Gibbon 11th (28.12), Abbie Donnelly 12th (28.24), Kate Avery 36th (29.11) and Lauren Heyes in 43rd (29.20).

This photo courtesy of Bjorn Paree

Close to two thousand runners at the Telford 10k – a course renowned for its fast times – and it didn’t disappoint with the first twenty seven athletes all posting sub 30 minute clockings. City of Sheffield’s Alfie Manthorpe came out on top by just one second as he ran 29.08 with Lincoln Wellington’s Lucian Allison in 2nd (29.09) and Cardiff’s Matt Clownes in 3rd (29.09).

A couple of Blackburn Harriers made the trip down, resulting in Callum Davidson coming across the finishing line with a time of 31.34 followed by Mark Magee clocking 32.52.

Closer to home was the Blackburn 10k, also run on Sunday December 12th featuring well over seven hundred and fifty runners including a number of Blackburn Harriers. 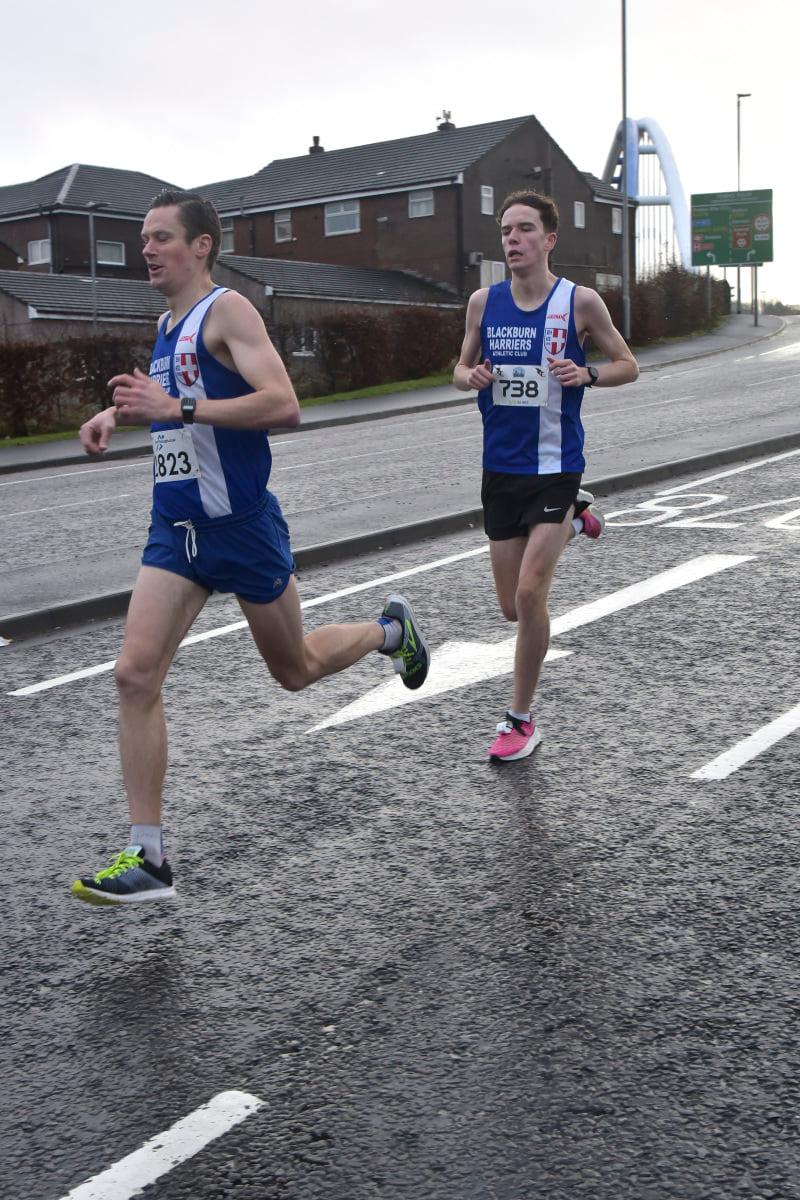 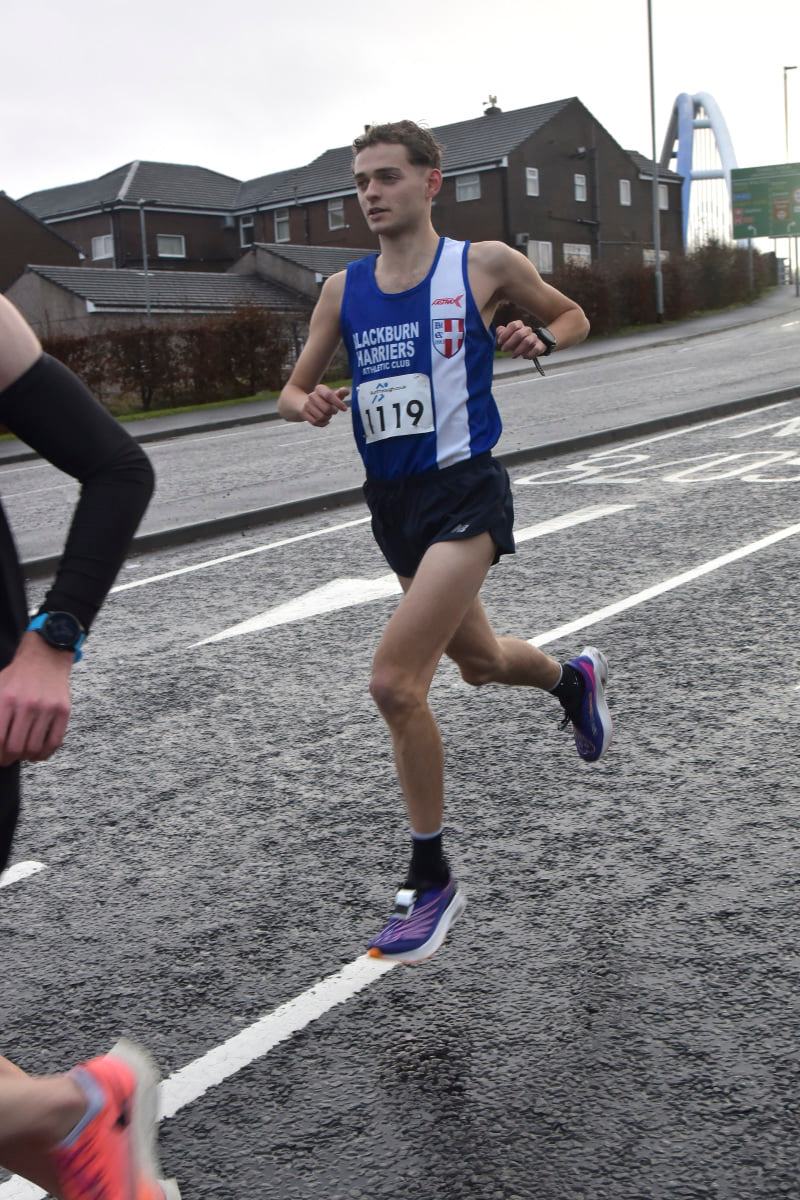 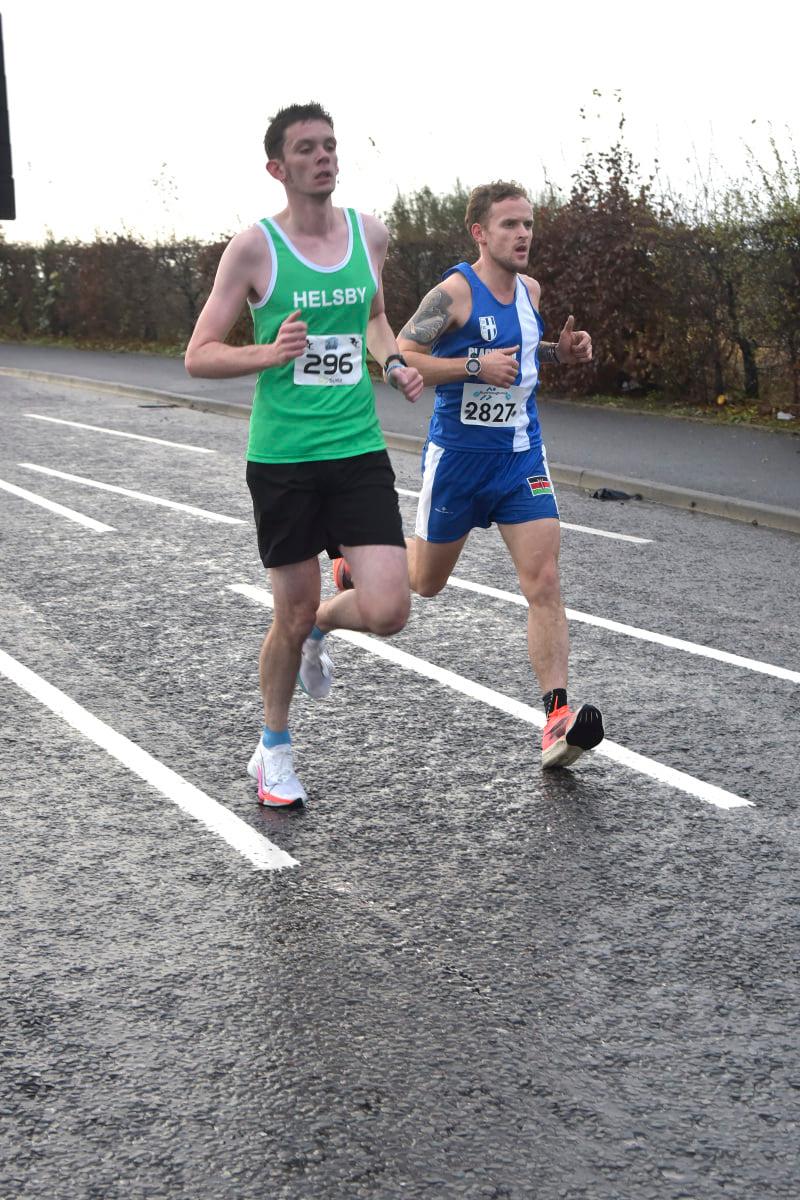 Next over the line was U20 Amy Davies who placed 104th overall and 2nd female with a new PB time of 44.19 in only her second attempt over the distance, previously clocking 45.03 at the Winter Warmer 10k in 2019. U17 Molly Nicholls had never raced over a longer distance than 3.1k in cross country, so the 10k distance was indeed a new challenge for her which she rose to, running a time of 46.33 in 145th place. V60 Mike Blacklidge was next Blackburn Harrier to finish in 150th spot running 46.46 in his first race for some time. Lindsay Davies placed 160th and 1st Female V45 with her time of 47.17 with Rachael Ashcroft not far behind in 172nd running 47.48. Hollie Cubbon was another U17 taking her first steps in a 10k road race after recently running the Preston 5 Mile in a time of 37.28, which she followed up here with a 48.26 time in 180th. U17 Eleanor Allsop was also in unknown territory, her only race this year being an outing at the Mid Lancs League cross country. On the day she ran 54.37 for her debut over the distance. She was followed home by Sprinter and sprint hurdler Roxanne Oliver who definitely was in new territory as she came home in 451st with a time of 57.55 (it is rumoured that the team manager offered her a slot in the 3000m in 2022 which was politely turned down!). Victoria McKinlay ran 65.46 with her children Jenna and Alex both having a run out on the day too in the ‘Kids Race’ where Alex finished 2nd in 2.23 and Jenna 7th (2.51)…….RESULTS 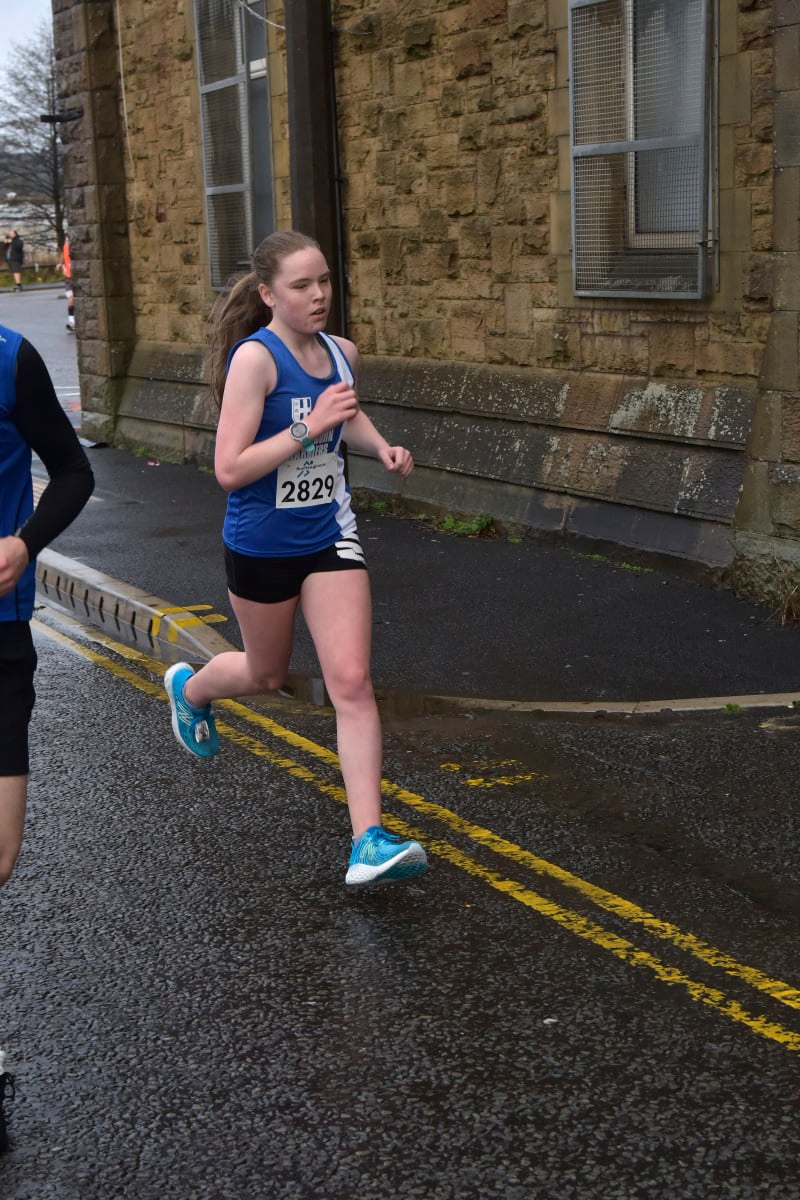 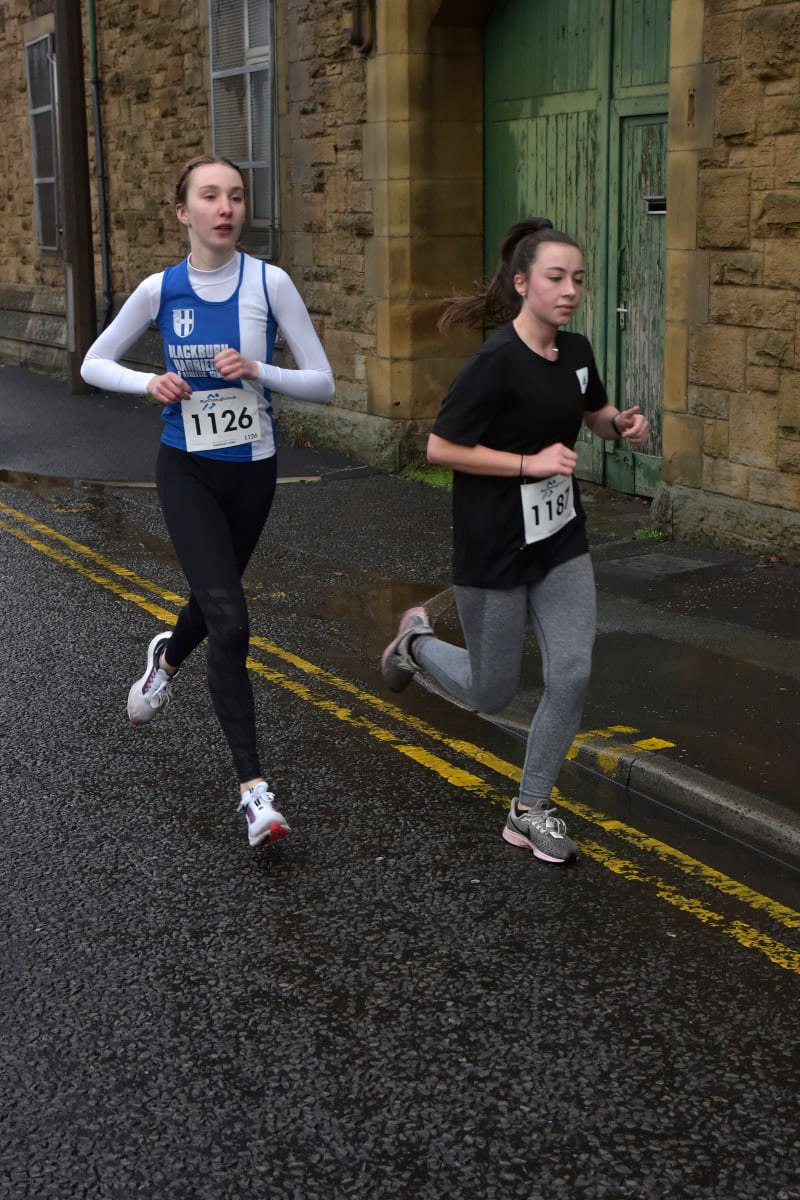 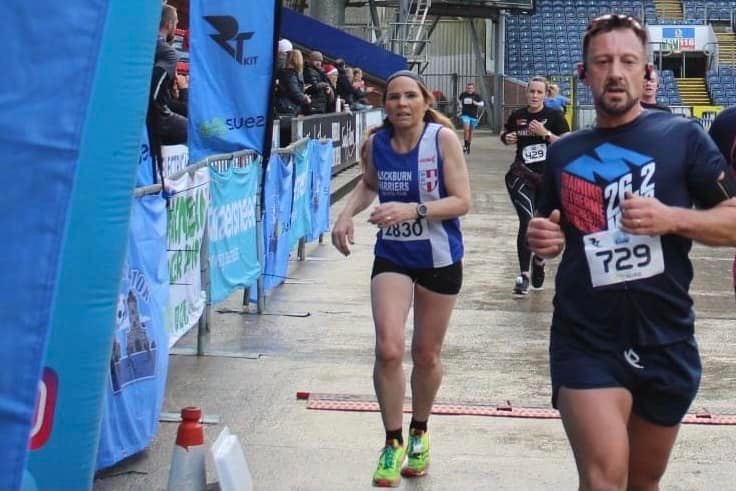 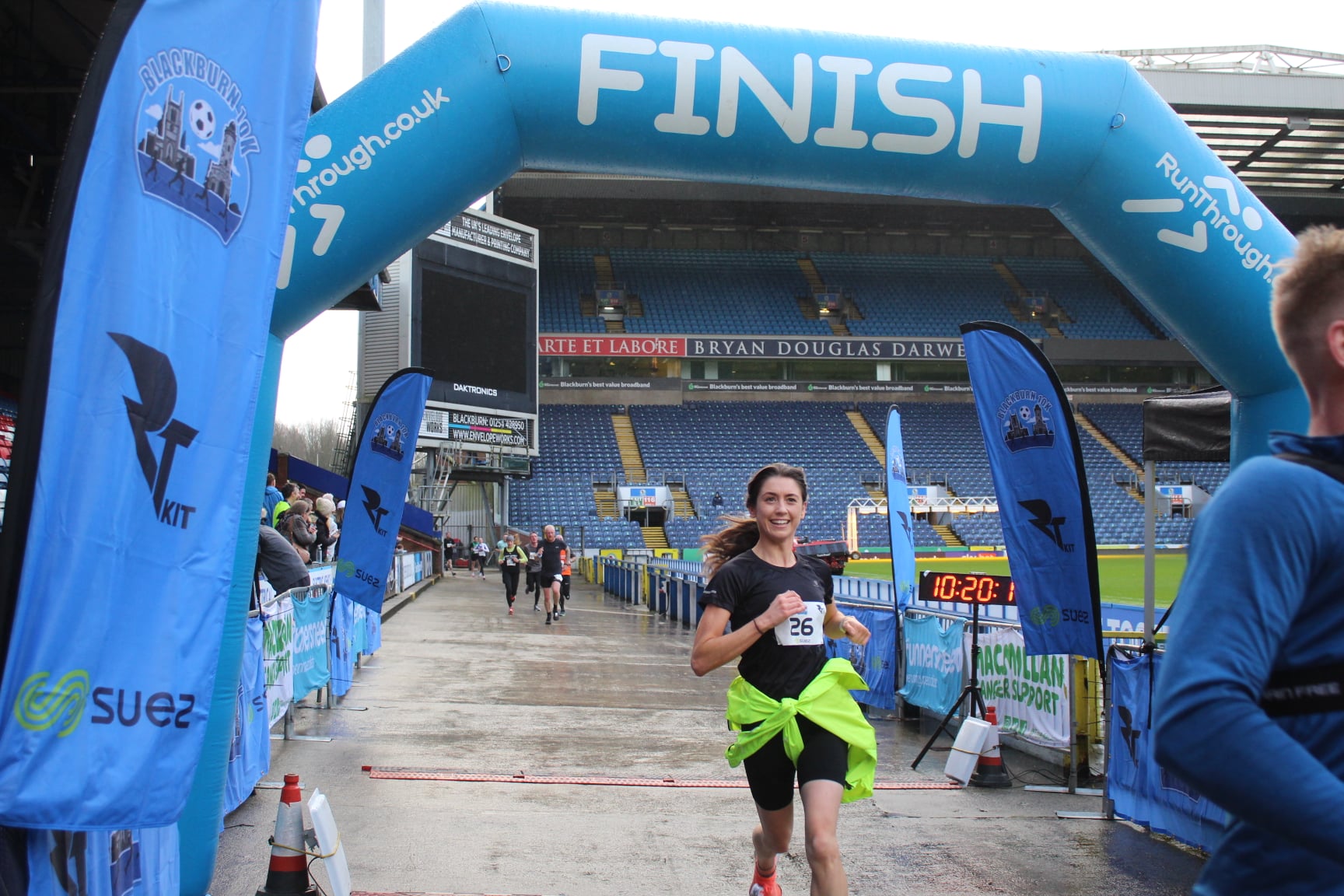 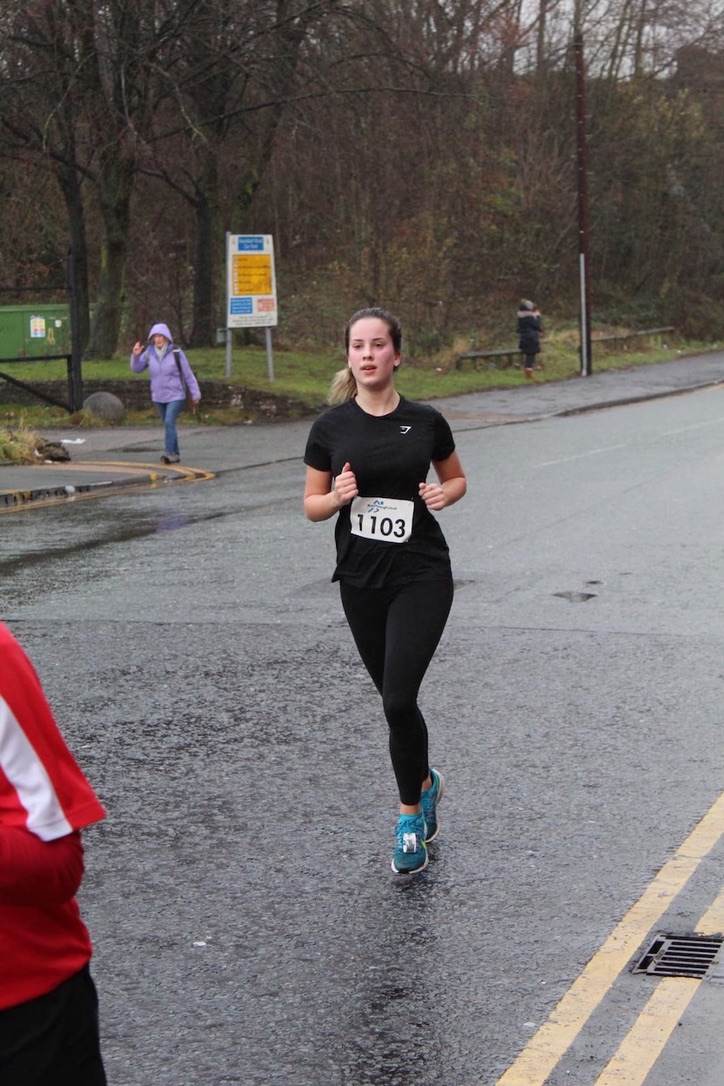 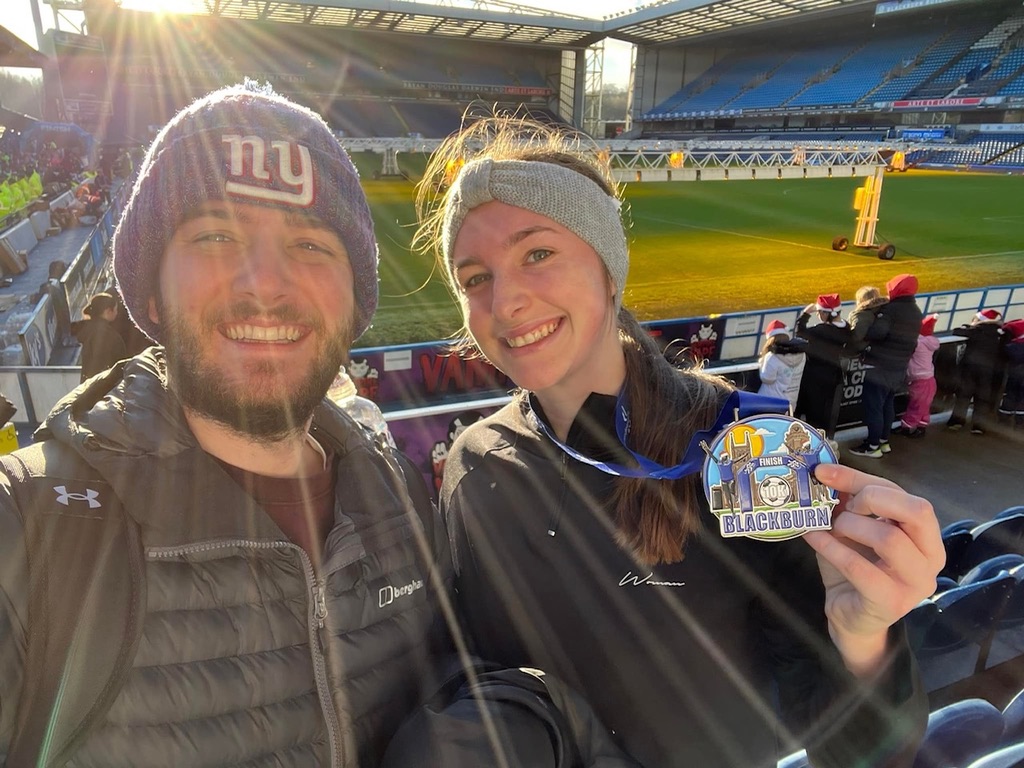 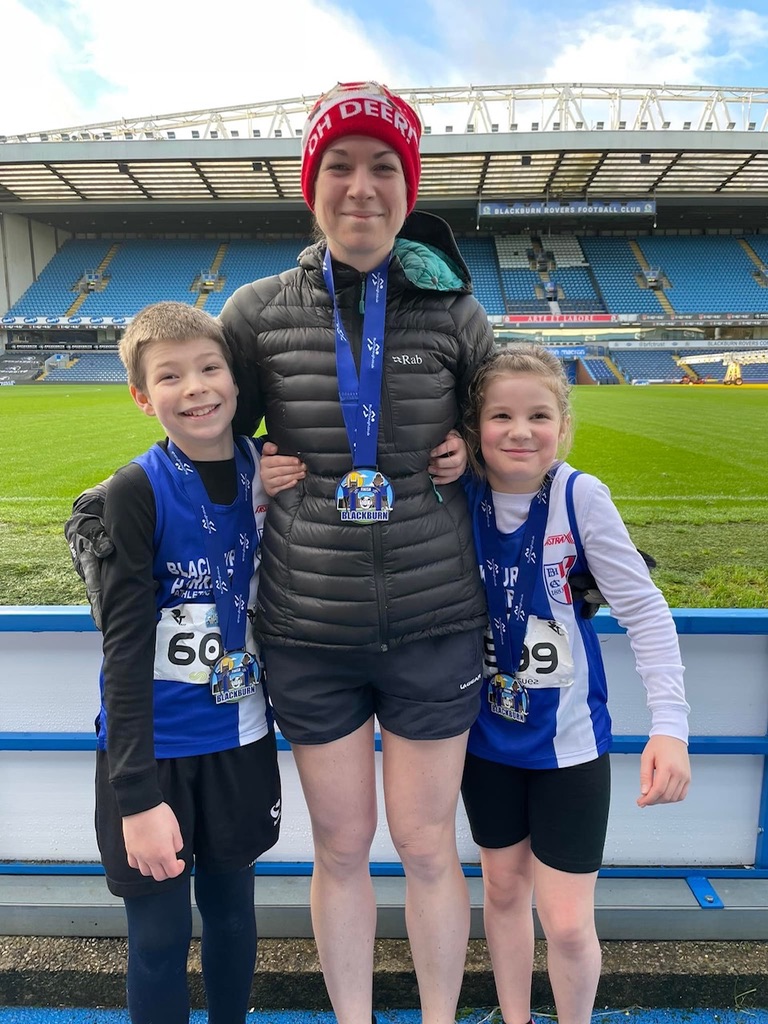 Vicky McKinlay with Alex and Jenna