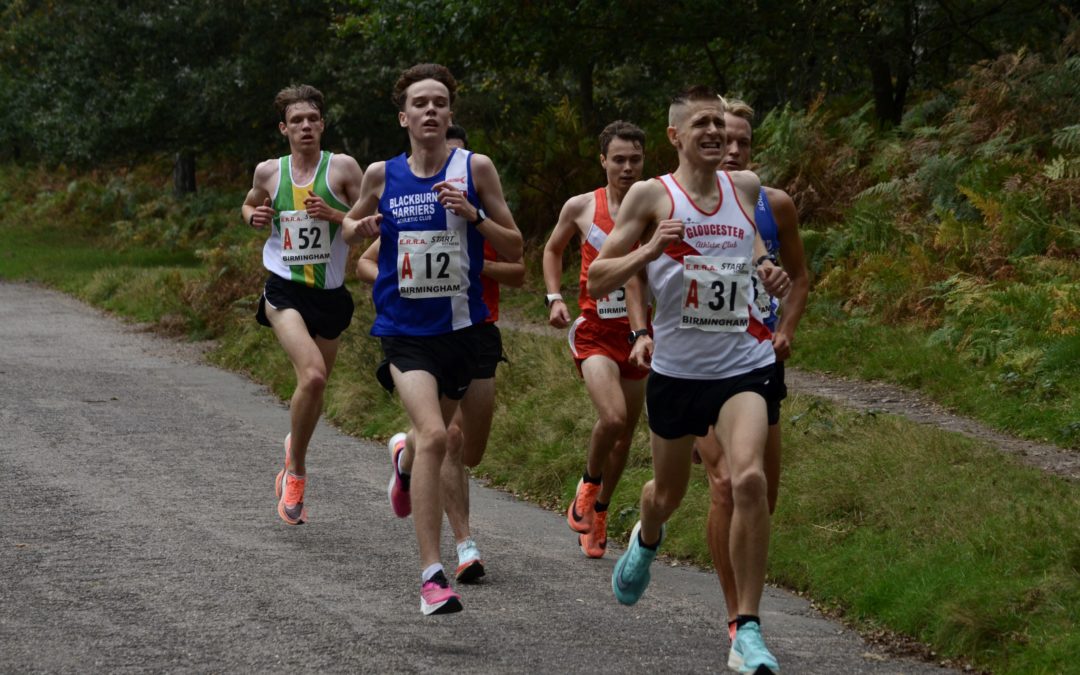 The sun started to shine as we approached Sutton Coldfield for the return of the National Road Relays. Club tents being put up, Race Numbers distributed and pinned on, Drills being done and athletes running round the course to get their bearings before their race started. A normal but very, very welcome sight for Clubs and their athletes from the length and breadth of the country. 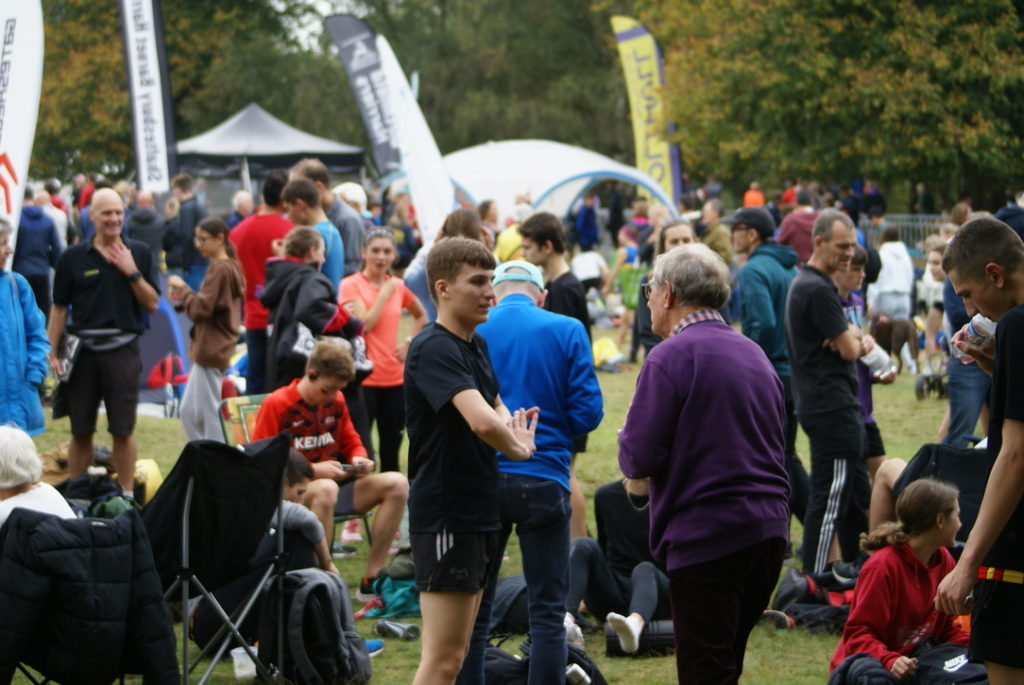 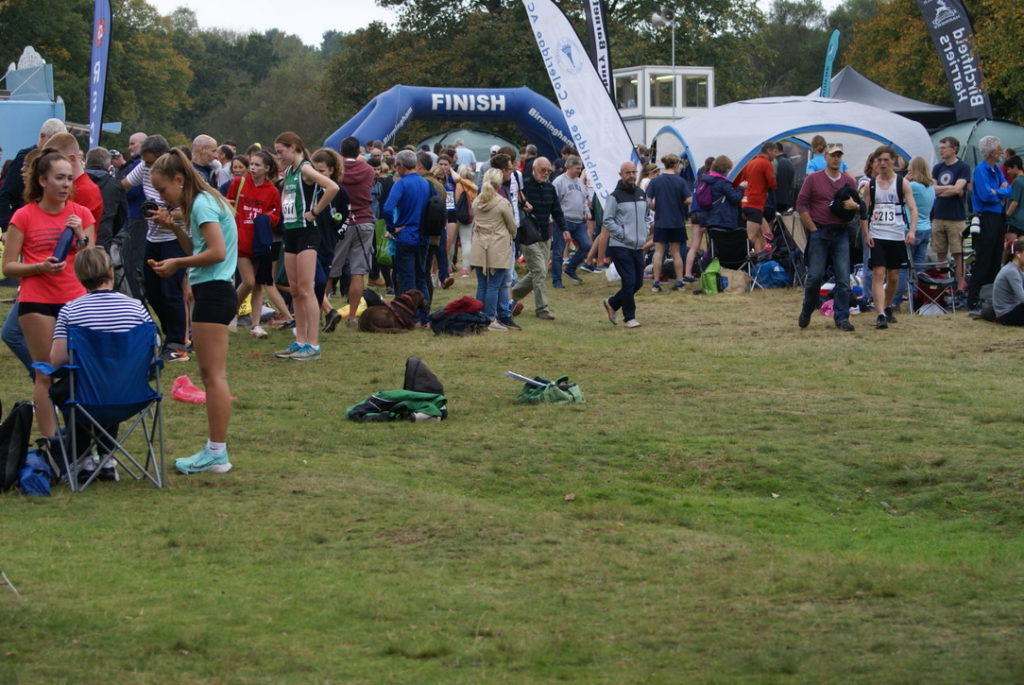 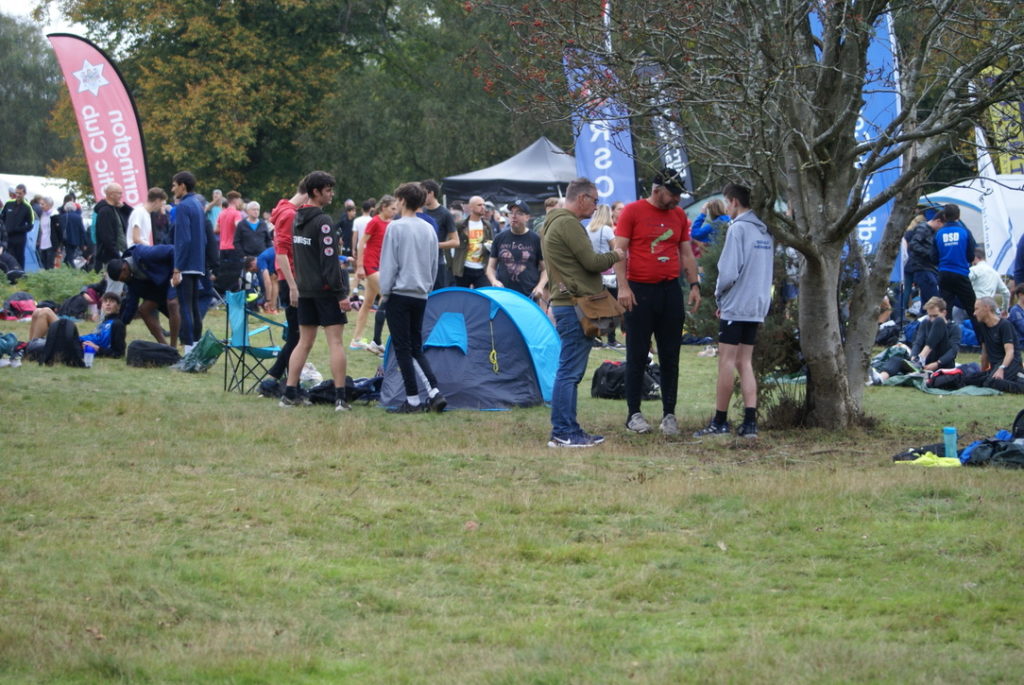 Thanks to Steve Duxbury for our Cover Photo on this Report

The days racing kicked off with the U13 ‘s Races which had our U13 Boys team who had won the Lancashire, Northwest and Northern Titles, coming into the Nationals full of confidence and looking forward to their race, but at the sametime, acutely aware of the ‘step up’ in quality that the Nationals provide. The lads didn’t disappoint. Sam Aspey took on the first Leg coming home in 6th place with a time of 14.0 – places 7,8,9 all clocking 14.08 which gave an indication of the level of competition on that first leg. Sam handed over to Theo Robinson on Leg 2 who ran the 7th fastest time of the Leg with 14.18 and picked up one place to bring the team up to 5th going into Leg 3. Oliver Brown on the final leg ran the 4th fastest time in that Leg – 13.54  – to bring the team up to 4th, just three seconds off the Bronze Medal. Great runs by all of the lads, cementing a quality performance from them at all of the road relays, from County through to National standard this year. 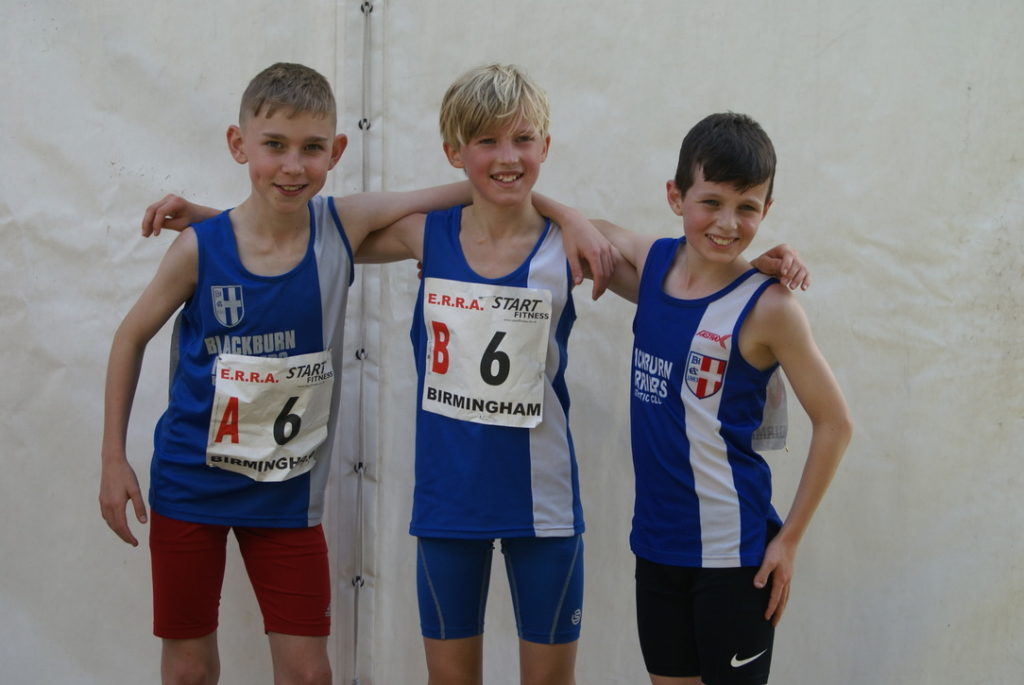 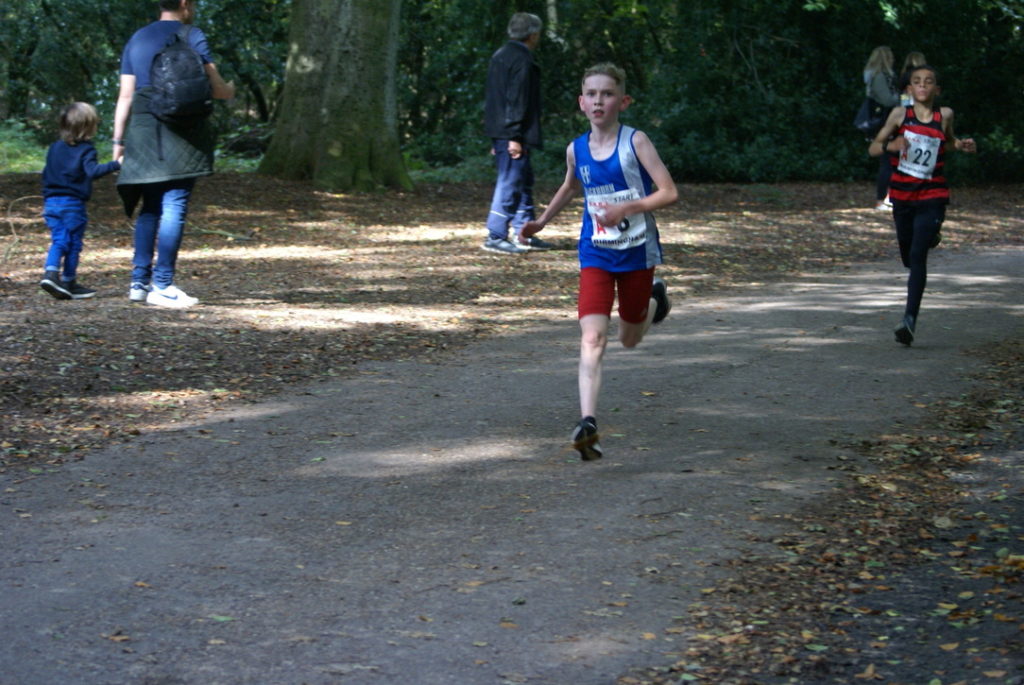 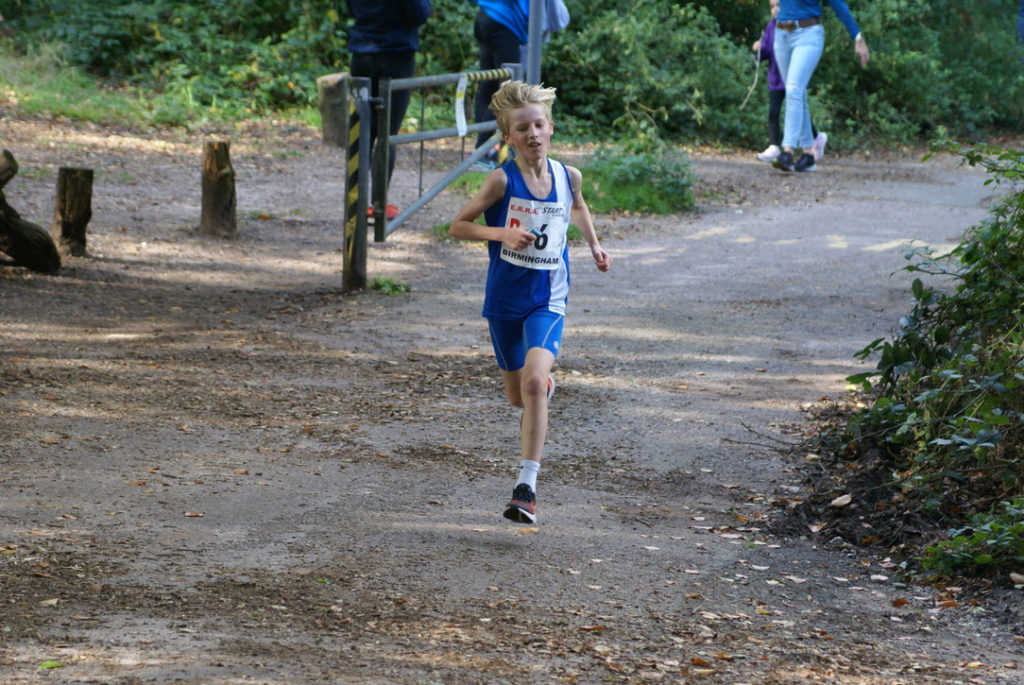 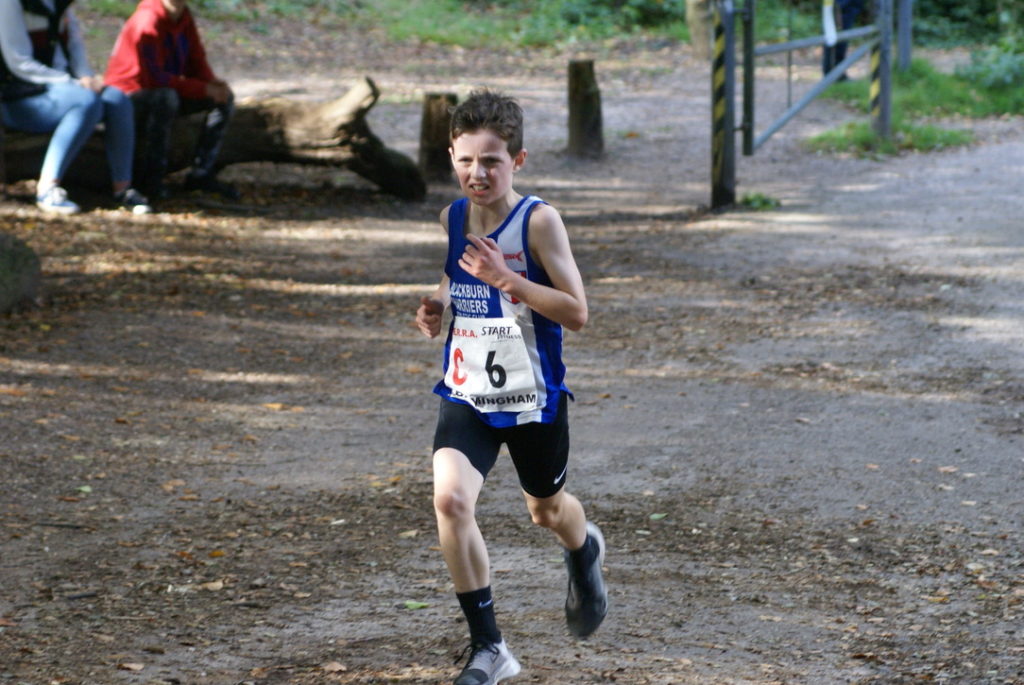 Daniel Smith, Oliver Gill and Ben Stratton had one change from the team that placed 4th at the Northerns in Redcar – Daniel coming in. Daniel was on the first leg along with sixty two other athletes from Clubs around the country and brought the team home in 23rd position with a time of 13.33. Oliver took over on Leg 2 running the 7th fastest time on Leg 2 (13.27) and picked up ten places to move the lads up to 13th spot as he handed over to Ben on the Final Leg. Ben clocked 13.47 to pick up another place which meant the team placed 12th overall in a combined time of 40.47, exactly the same time as 11th place (St Albans) also with 40.47. Really consistent running between the three lads with just 20 seconds separating the three athletes. 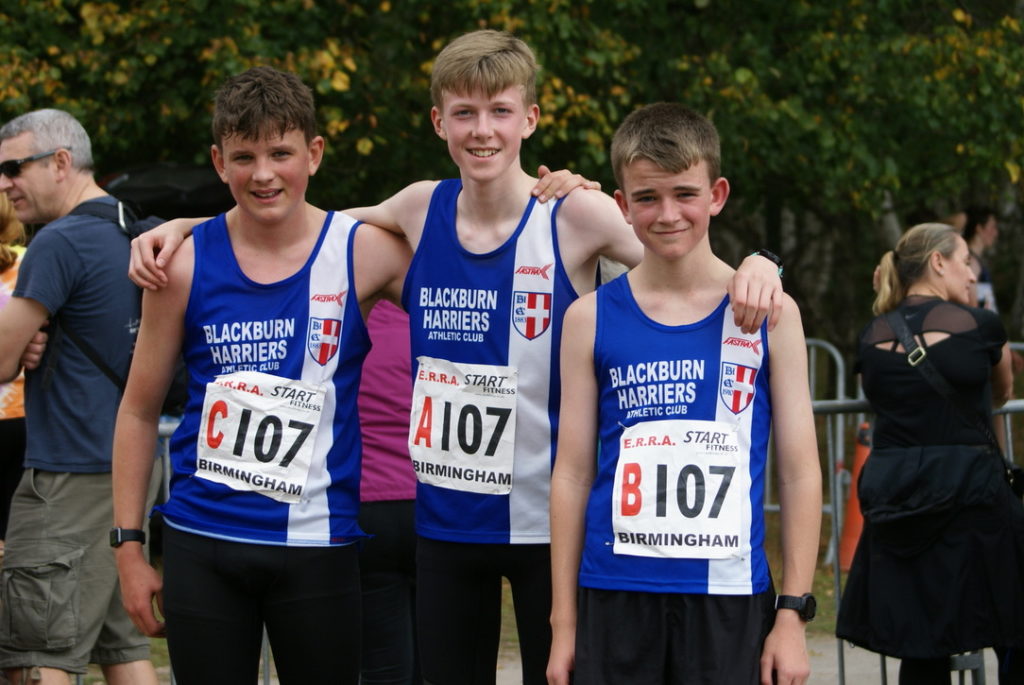 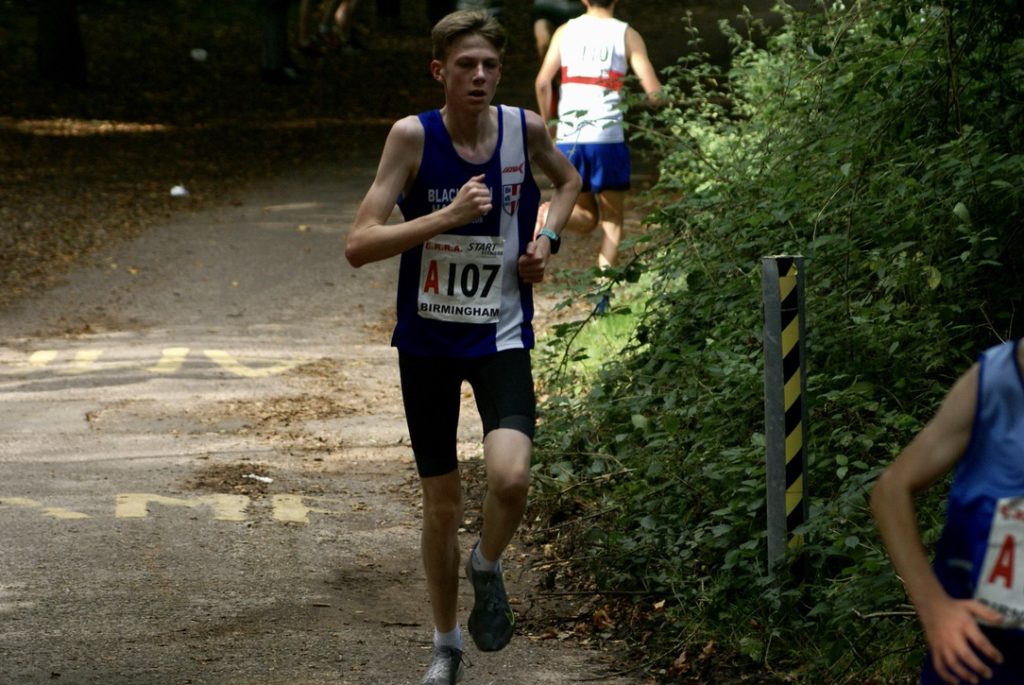 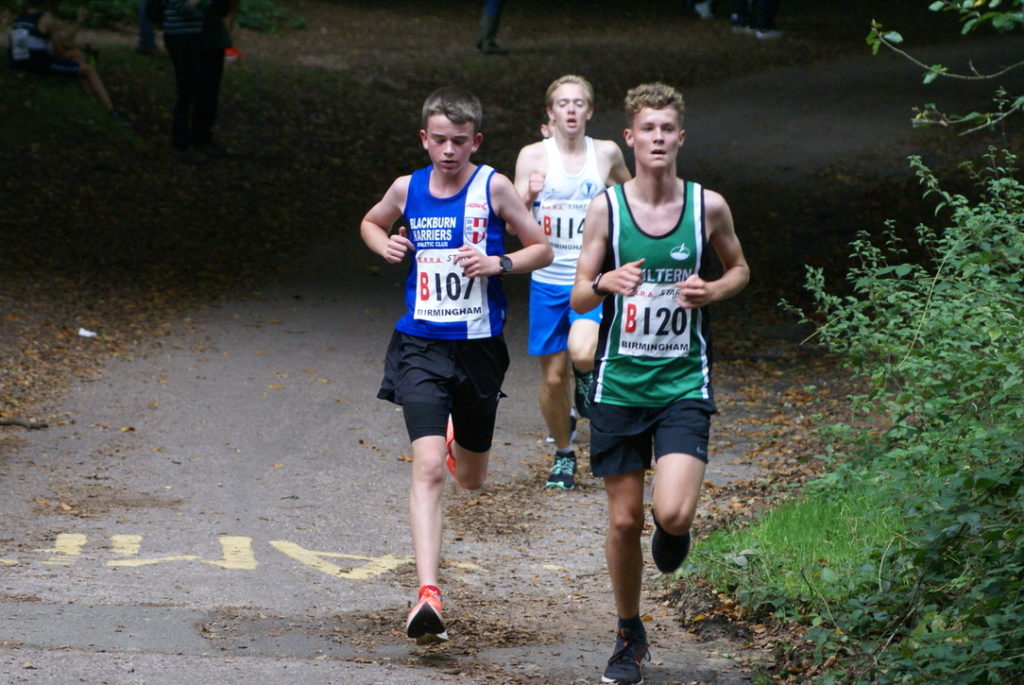 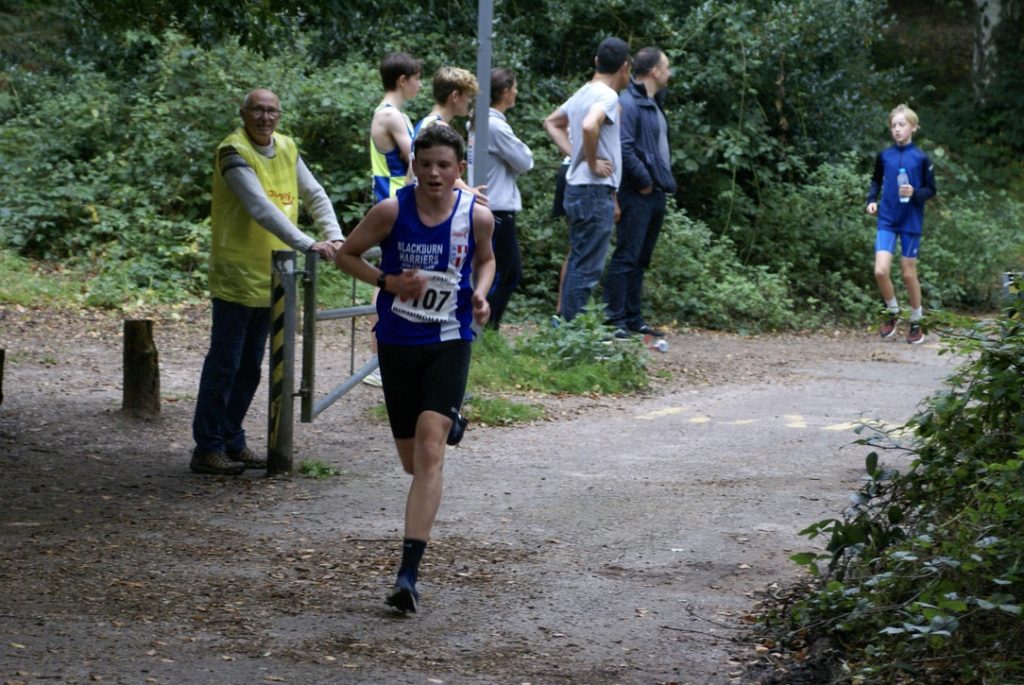 Ben Stratton – with U13 Theo Robinson cheering his teammate on in the background, bottle in hand

Abigail Stratton, Isabel Holt and Keira Haxton have had a cracking season in the Road Relays, having already won the Lancashire and Northern titles. Abigail led the team off on Leg 1, bringing them home in 8th place, clocking 14.01 as she handed over to Isabel on Leg 2. She ran the 2nd fastest time of the Leg and the 8th fastest Leg of the day as she went past five more athletes, running 13.35 to hand over in 3rd spot to Keira who clocked 15.39 to finish in a very fine 6th position in their first Nationals together as a team. 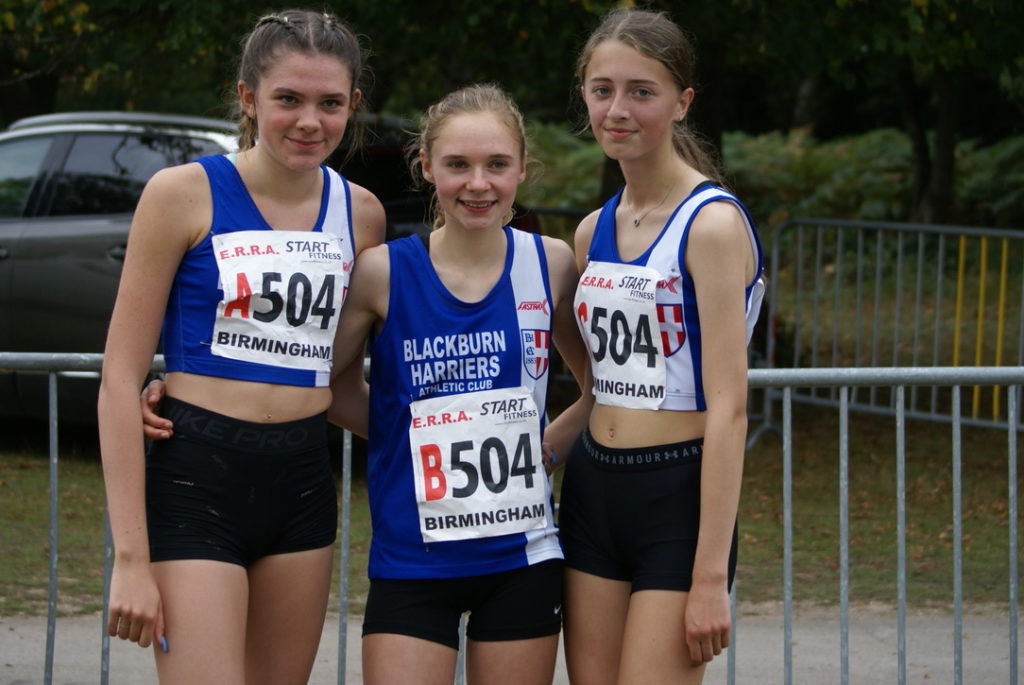 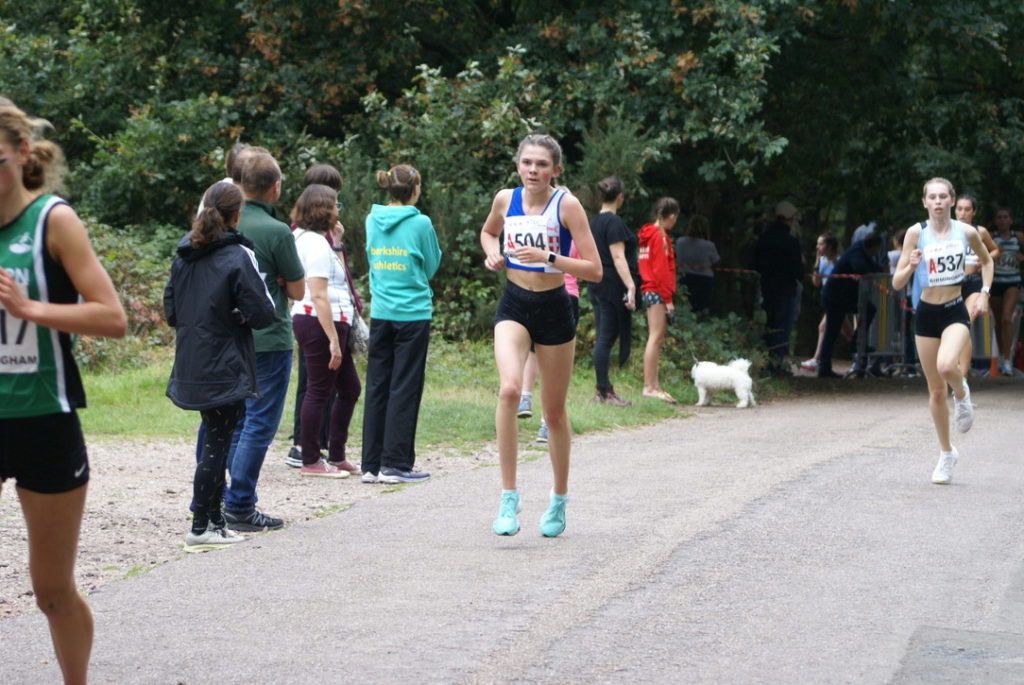 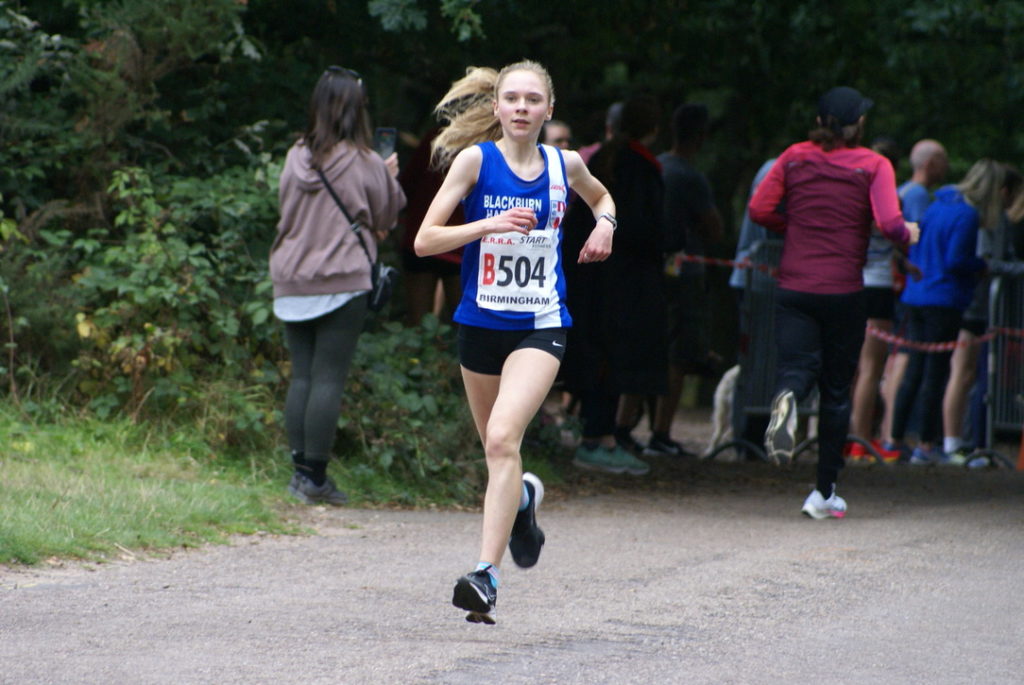 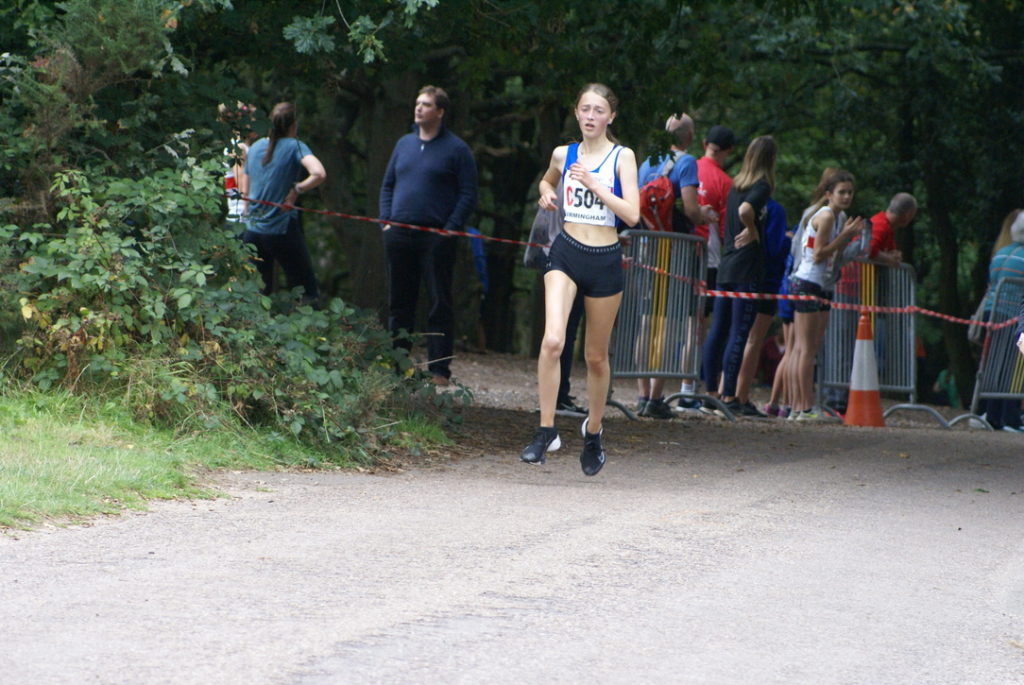 The Senior Men’s Team were coming into the Nationals off a 3rd placed finish in the Northern Road Relays at Redcar, last minute changes through injuries, the curse of all Relays events, meant last minute changes to the two teams running for the Club – the ‘A’ Team comprising Mark Magee, Rob Warner, Lawrence Fairclough, Ben Fish, Tim Raynes and Nick McCormick, whilst the ‘B’ Team had Matt Ramsden, Stephen Walter, Ben Makin, Ryan Bradshaw, Tim Baldwin, and Joshua Holgate. 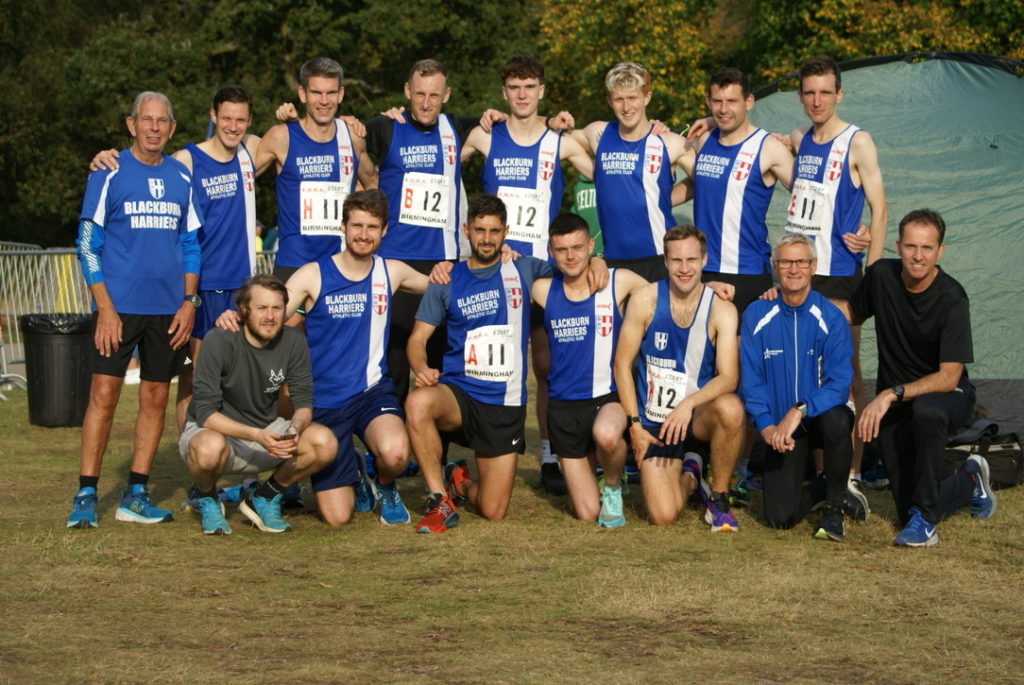 Mark Magee led off for the A team running 18.36 in 51st spot as Matt Ramsden had a blinder – the run of the day on the first Leg for the B team with a clocking of 17.35 – the fastest time of all the Harriers to place 22nd. Leg 2 for the A team saw a welcome return from injury for Rob Warner who pulled back 12 places in his run of 18.07 whilst Stephen Walter ran 19.40 for the B team leaving them in 46th spot. New member Lawrence Fairclough ran Leg 3 for the A team in 18.42 pulling back three places to leave the team in 36th place as Ben Makin ran Leg 3 for the B team (19.25) which kept them in 46th spot. 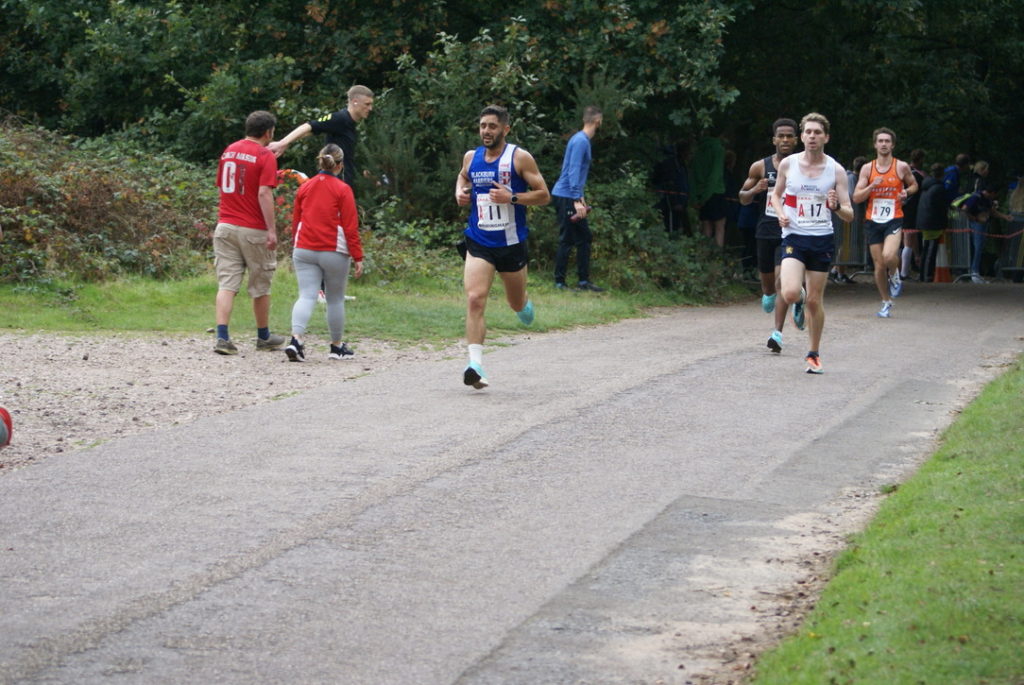 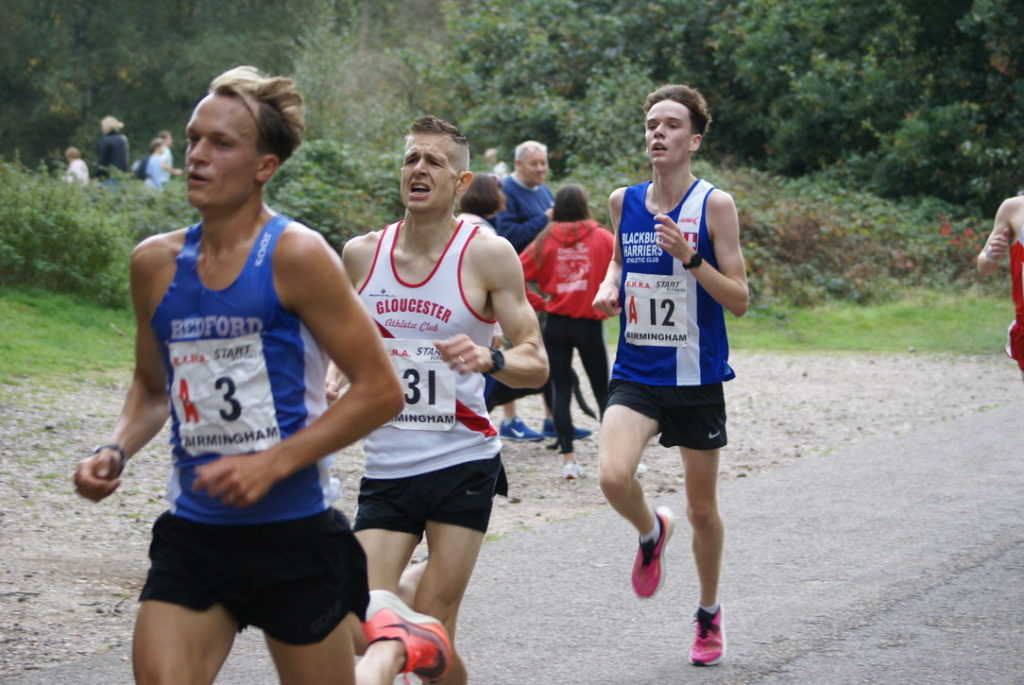 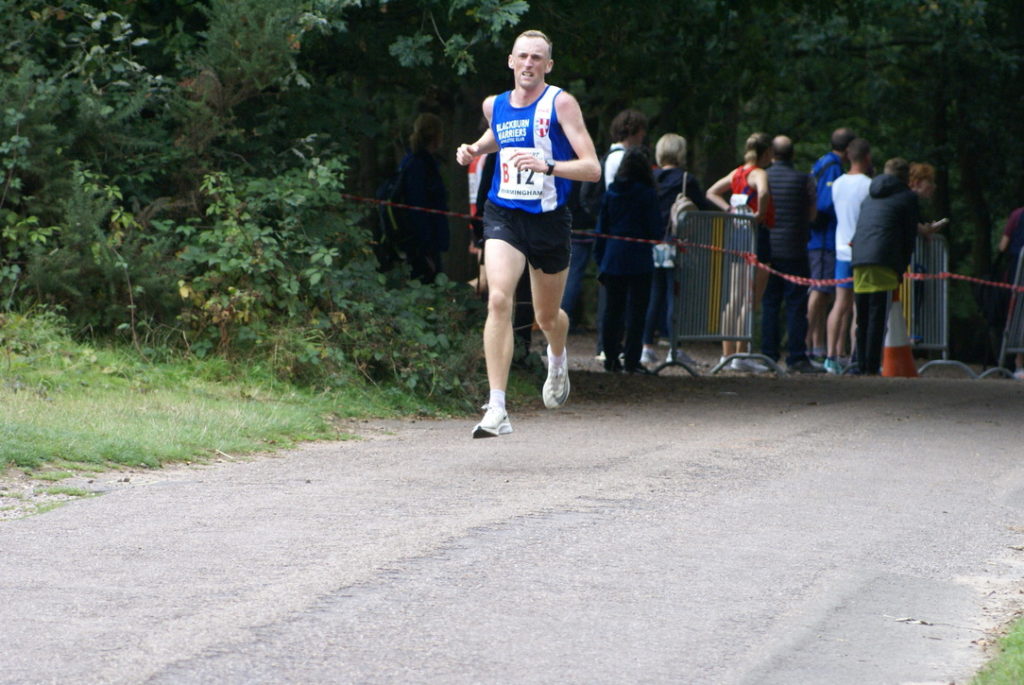 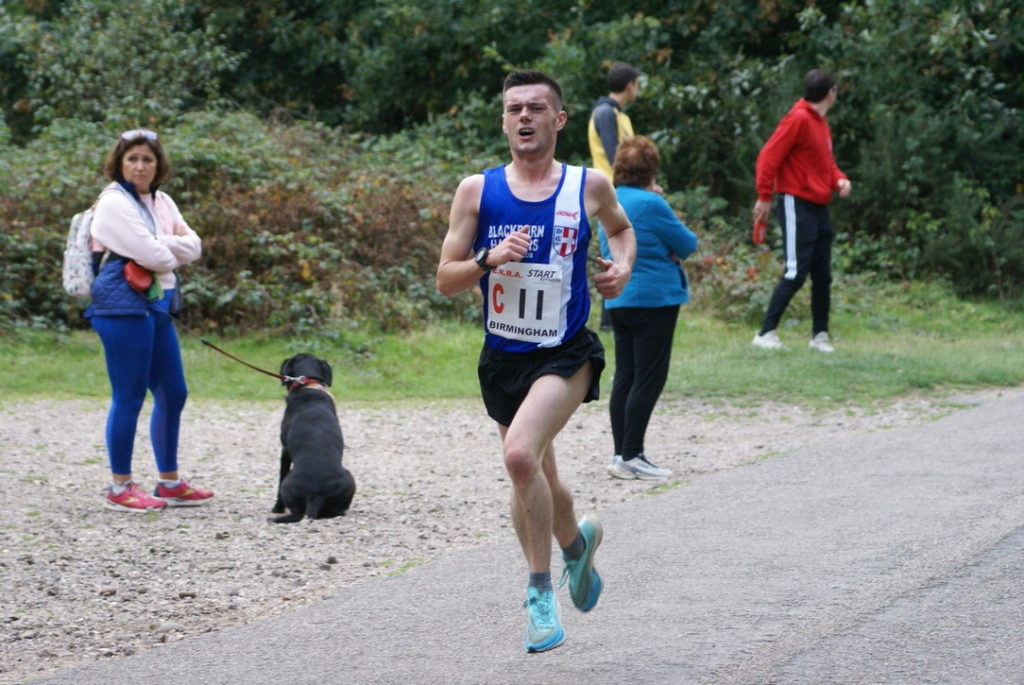 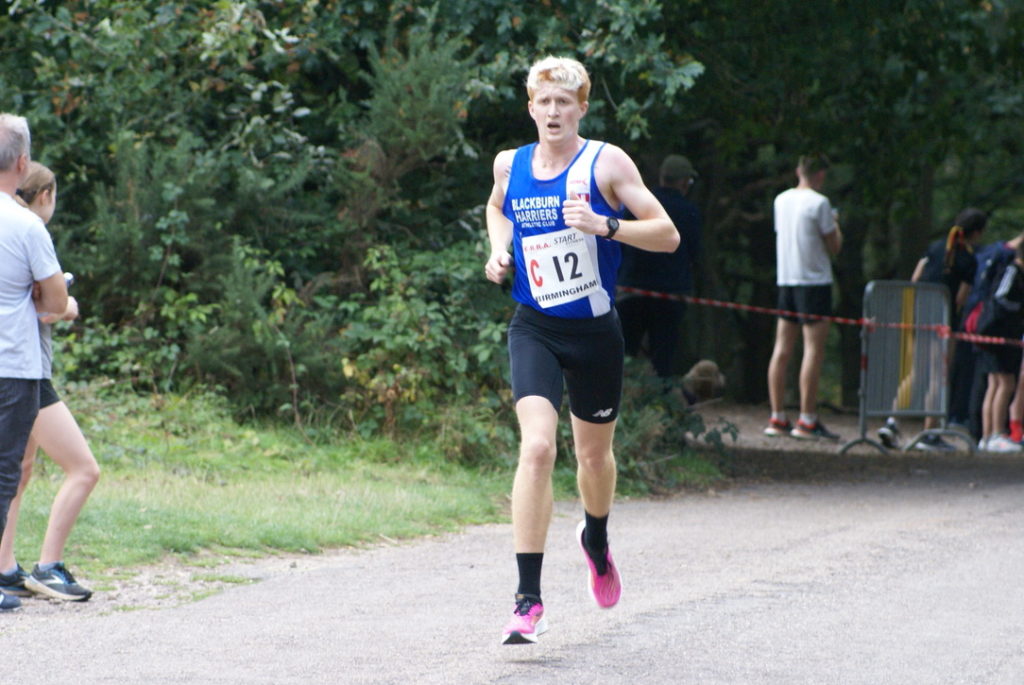 Ben Fish took off on Leg 4 and ran the 8th fastest time for the Leg (17.38) gaining another 13 places taking the team up to 23rd with Ryan Bradshaw running 20.03 for the B team who moved to 48th. Tim Raynes ran the 9th fastest time on Leg 5 (17.52) to gain another 2 places and for the B team, Tim Baldwin clocked 19.40 and in the process gained another 7 places for the team to leave them in 41st. Nick McCormick ran the 7th fastest time on the final leg (17.50) pulling back another 4 places which meant the team finished in 17th overall whilst Josh Holgate for the B team maintained their finishing position of 41st with his time of 19.09. The A team and B team were both significantly faster than the last time they ran the Nationals as were some of the individual performances which saw Ben Fish run 23 seconds faster, Rob Warner 30 seconds faster, Tim Raynes 44 seconds faster and Josh Holgate 39 seconds faster. In addition, Nick McCormick in reflecting back on his last time running at the Nationals where he finished 2nd with the Morpeth team told us that the time run by the Harriers in 2021 would have placed them 5th in 2005. Nick went on to sum up the day for the Club and the Senior Men’s team as he told us “The last time I put a vest on at the northern and national road relays for Morpeth, nobody had ever heard of Blackburn Harriers as a competitive road running team. In 1 month in 2021, we have picked up a northern 6 stage Bronze medal at Red Car and run within a minute of the cumulative time of my Morpeth team that in 2005 finished 2nd at the national 6 stage. Wow. I think nationally we can clearly see that the depth in standard of endurance on the mens side is higher than it has been since the 1980s, Leeds and Aldershot both had 2 teams in front of us. To a man, I was proud of the individual legs that the 12 Blackburn Harriers runners of the a and b team ran on a next level course around Sutton Park. The stand out performance was from Matt Ramsden – in the b team, who at 18 years of age ran faster than every Blackburn Harrier and really came of age on the challenging 6km circuit. It was also great to see a real blend of experience and youth which will set us up well for both Northern/National 12 stages in spring 2022.“ 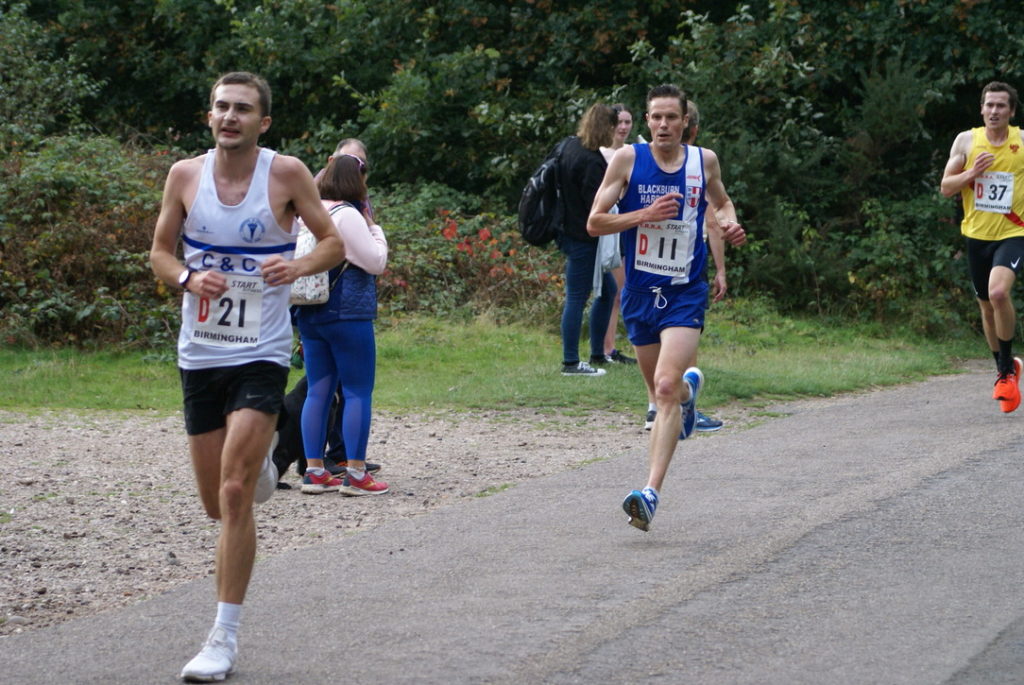 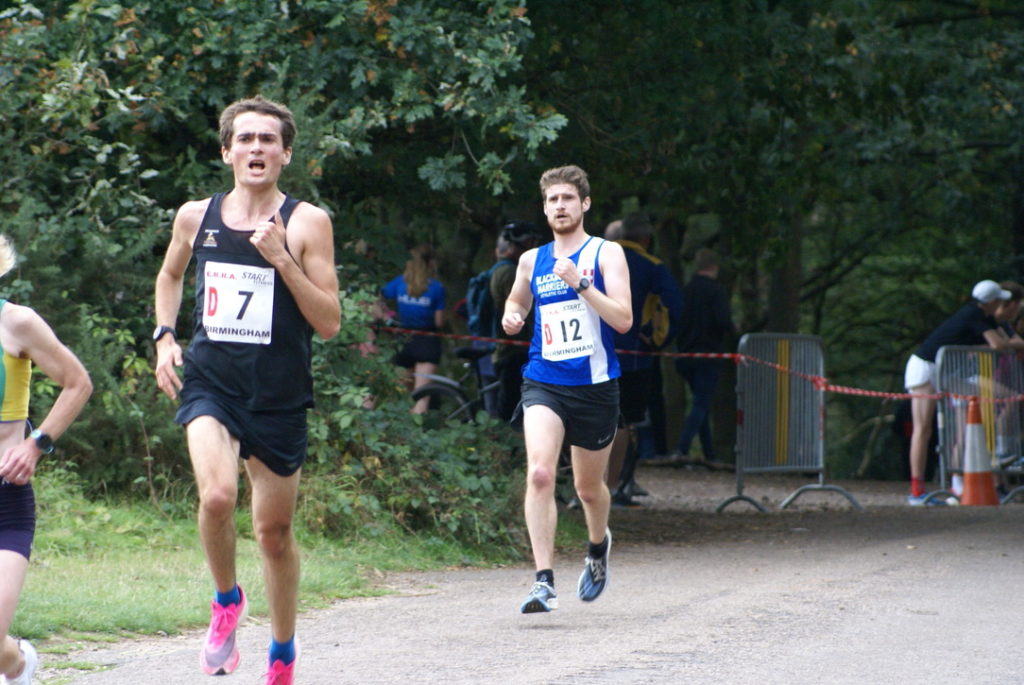 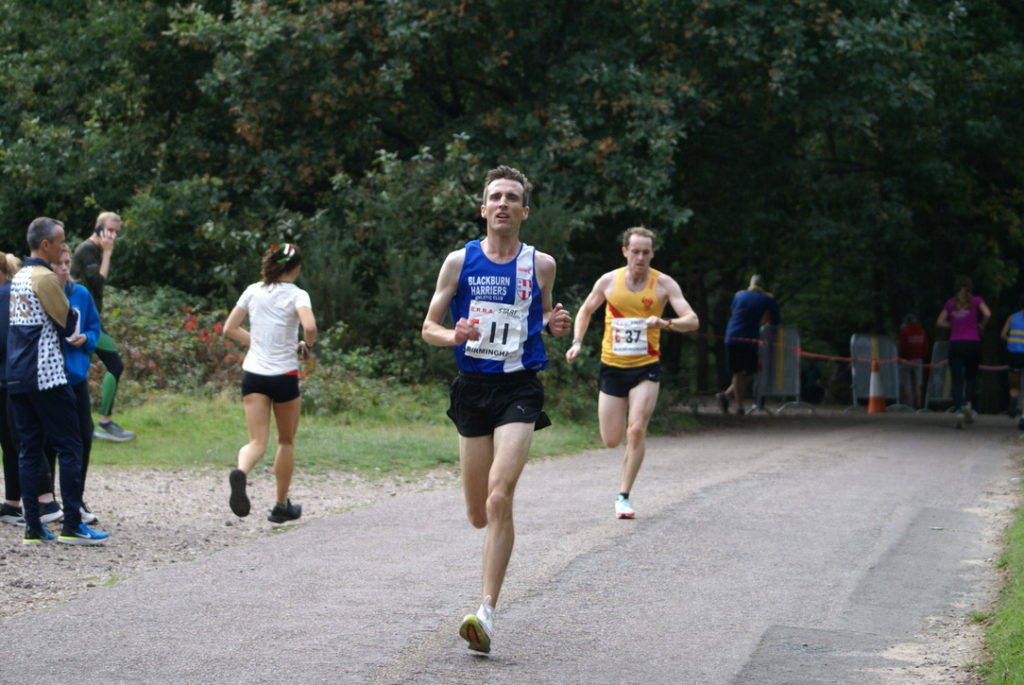 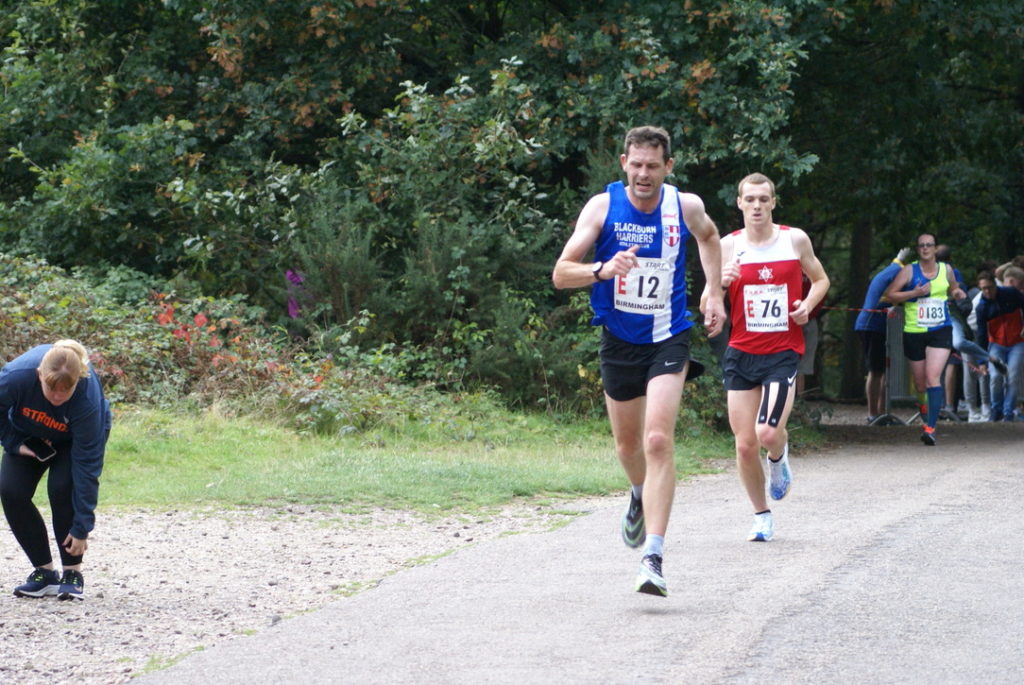 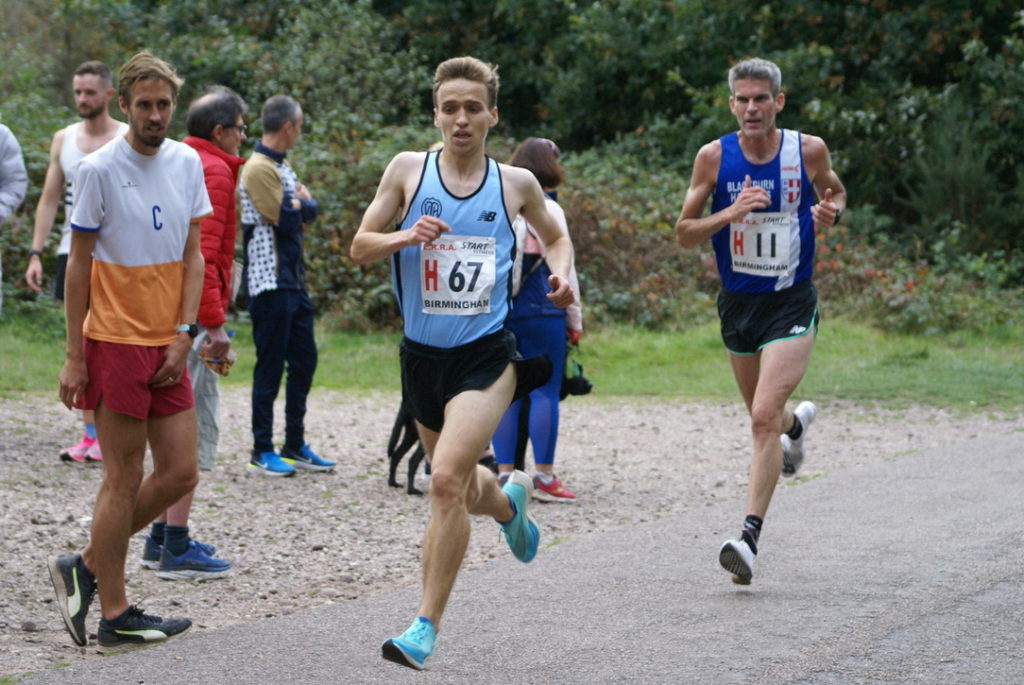 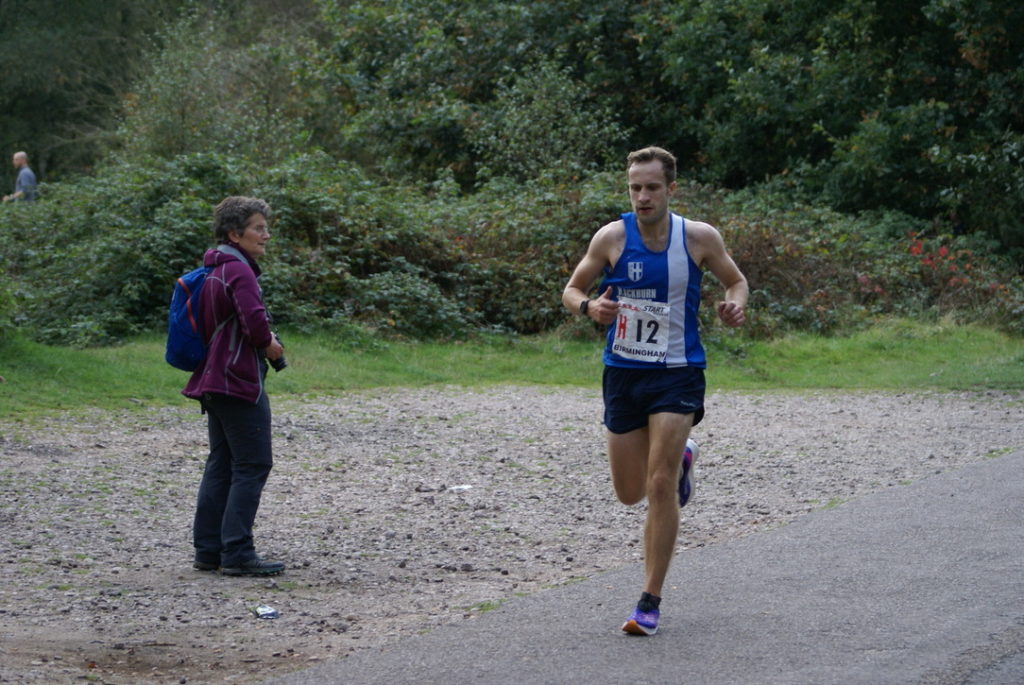