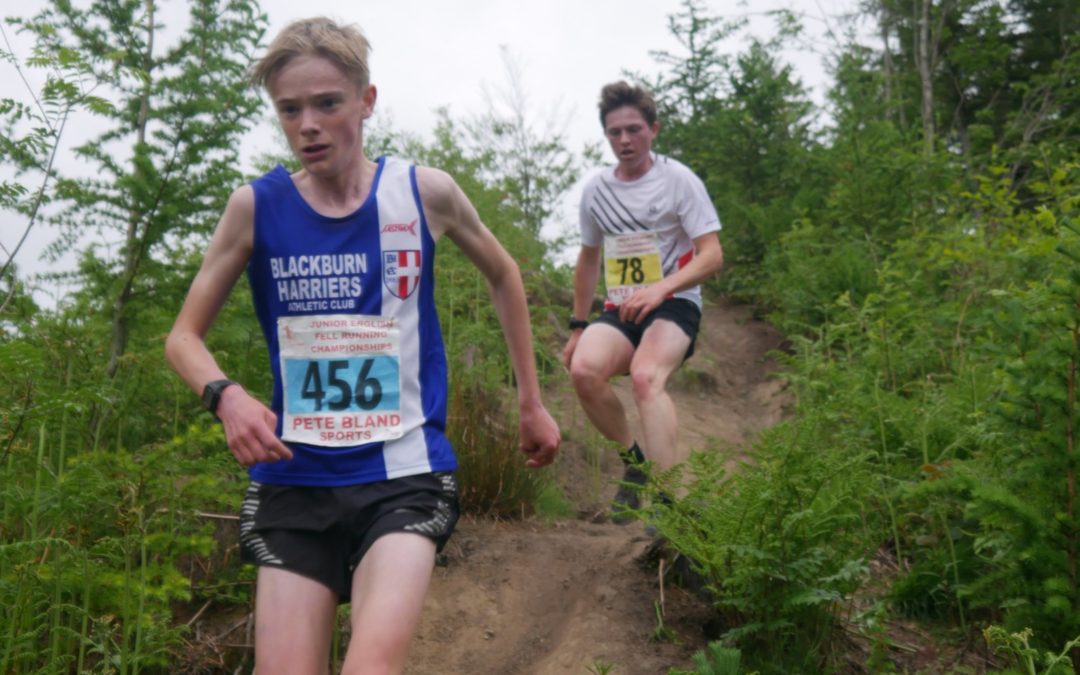 Back to winning ways for Holly Bradshaw at the XVII Meeting Iberoamericano — (RESULTS) — held in Spain on Wednesday May 25th. Coming in at 4.40m and clearing on the second attempt, Holly then had first time clearances of 4.50m and a seasons best 4.60m to win the competition with another British athlete Molly Caudery setting a new personal best of 4.60m in 2nd place. Commenting on her social media after the event Holly said that “It’s hard being a person who relentlessly demands such high standards of herself not to be mildly disappointed with the extrinsic result today HOWEVER I can’t help but be stoked at my overall process performance today here in Huelva!

After the unfortunate NH in Birmingham I had to strip everything back and focus on the basics! The homework I’ve been doing over the last 4 days paid off today and now I’ve laid the foundations (the run) I can now focus on building the house (the jump)

Side note…incredible to see @molly_caudery back better than ever and another brit over 4.60.”

On to the road on the same evening and this time it was the Wesham 10k —  (RESULTS)  —  which had five Blackburn Harriers lining up on the Start Line among the two hundred and fifty entrants. Turned out to be a pretty good evening for the Club with three Harriers home in the top ten places. Wesham’s own Rob Danson was the winner in a time of 32.07 with Blackburn Harrier Marc Hartley the first one home for the Club in 2nd spot running 34.10 followed in by team mates V50 Nick Gaskell (7th) with a time of 34.34 and Tom Blaney in 9th spot running 34.50. In 18th place came Chris Walton with his time of 36.18 and in 21st spot it was good to see Karl Billington back racing in a time of 36.42 – only his second race since November 2021. 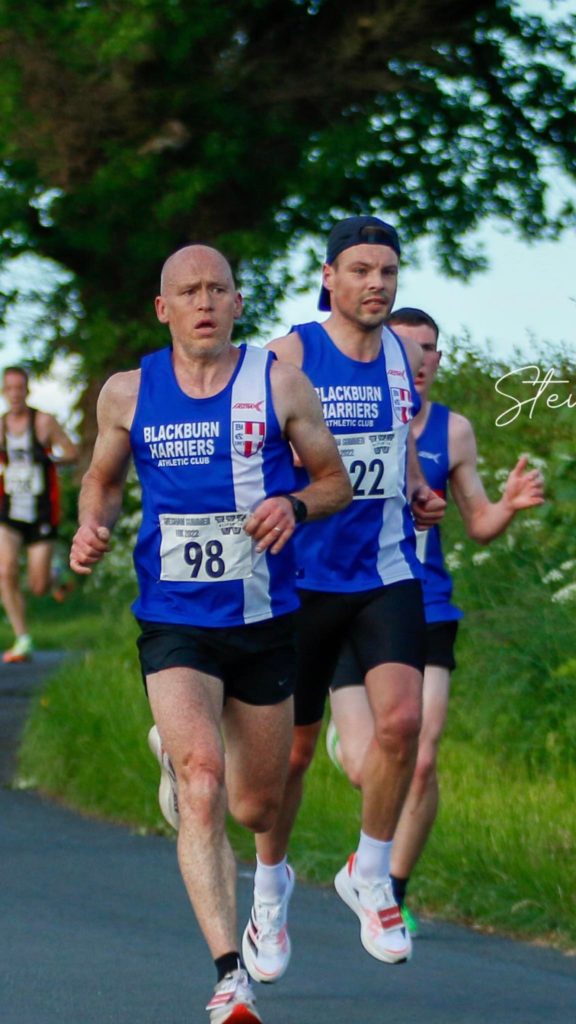 Wednesday night again saw Blackburn Harriers Helen Leigh out on the Fells, this time at the Latterbarrow Loop covering 3 miles and over 800ft of ascent  — (RESULTS)  —  Helen had another very good run in the race won by Ricky Lightfoot 24.26. Helen took 20th spot overall and 2nd in the Women’s Race running 31.27. Speaking to the Harriers later Helen told us that “The Latterbarrow 3mile loop was right on my doorstep so I couldn’t not go for a quick evening smash out. Was the first rhino to the river after a mad charge off the start which resulted in a breakable trophy I’ve got to take care of for a year! Soon overtaken by speedy Sophie on the first climb but pleased with 2nd lady.”

Also on the Fells last weekend was Blackburn Harriers U17 Jack Lamb at the Guisborough Woods Junior Classic on Sunday May 22nd, a race run over 6.2km with 250m of ascent  —  (RESULTS)  —  In the U17 Boys Race Jack came home in 9th place running 30.18.5, the race being won by Calder Valley’s Charlie Pickens. 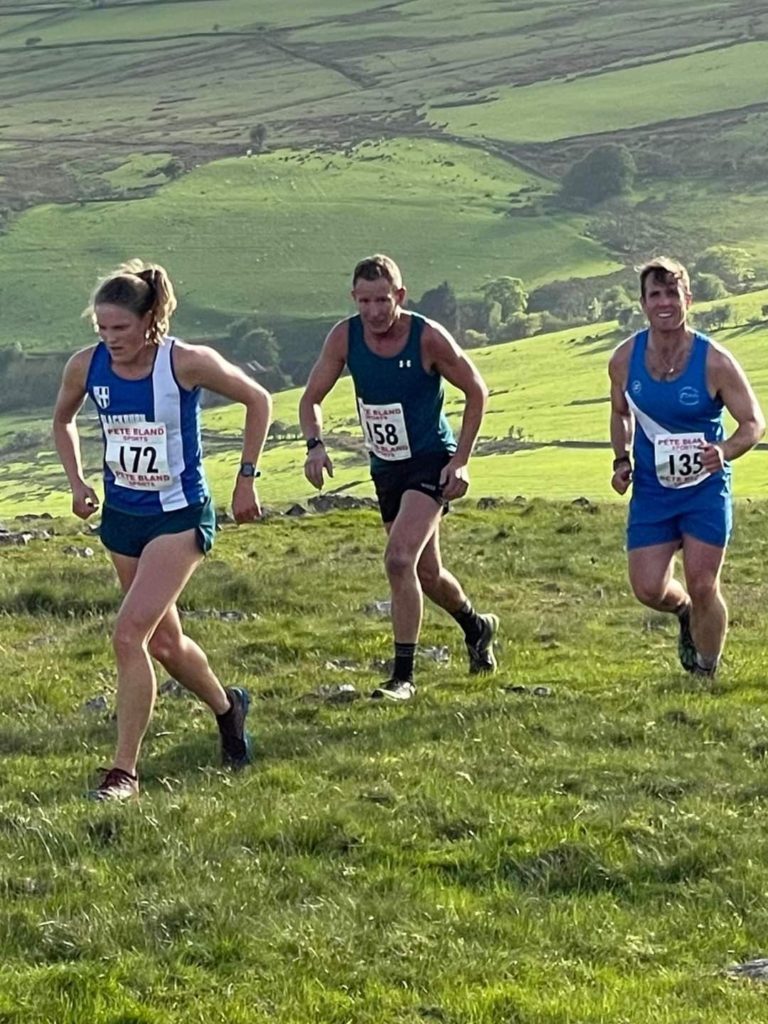 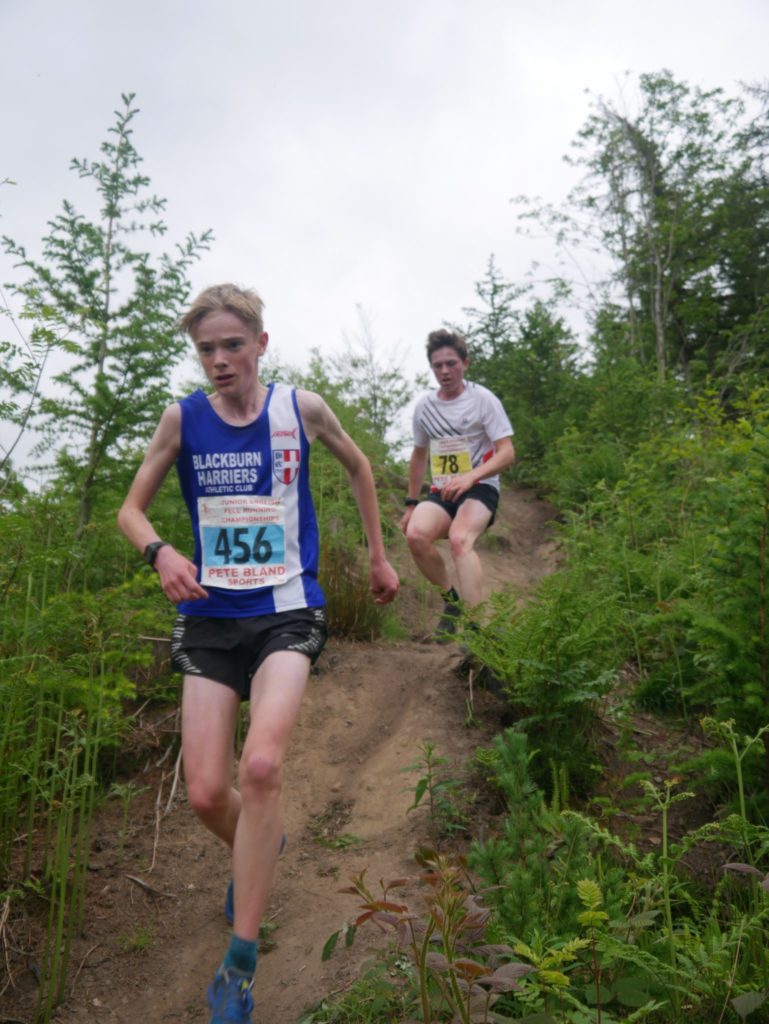 On to something different and this time it was in the Triathlon that Blackburn Harriers Danny Maynard was one of over 600 triathletes competing in the Southport Standard Distance Triathlon —  (RESULTS) —  finishing 297th overall and 39th in his age group (30 – 34) out of a total of 71. After the the Swim, Bike and Run race was finished, Danny spoke to the Harriers about the day telling us “My second attempt at a standard distance triathlon with my last being in 2019. The swim was tough as I’m not used to that distance in open water. Felt ok on the bike and managed to maintain a good pace over the 40km. I gained 81 places on the run and finished the 10k in just over 43 mins. Southport triathlon is used as an European championship qualifier, so it was great to race against some top triathletes.“ Danny wasn’t the only one in the Triathlon at the weekend as the Smith family, Matthew, Charlotte, Helen and Paul were all out at the St Anne’s Triathlon. It was Charlotte’s 1st triathlon and she completed it in a good position, especially as she is bottom of age group, and, more importantly, enjoyed it. Matthew finished in 3rd, and was very close to silver medal position; the two boys above him having travelled from Wales and Scotland to compete. Paul and Helen competed as vets and Paul was especially pleased with his swim and his run. Helen’s run was also faster than her usual efforts, which she was “surprised about as my legs felt like jelly after the bike ride.” And last but by no means least at the weekend, congratulations to Blackburn Harriers Eleanor Allsop who surprised everyone at the Club by announcing that she was planning to run the Manchester Half-Marathon  —  (RESULTS)  —  This was U17 Eleanor’s first ever attempt at the distance finishing with a time of  2hr 01.17 with her brother William running 1hr 42.12.