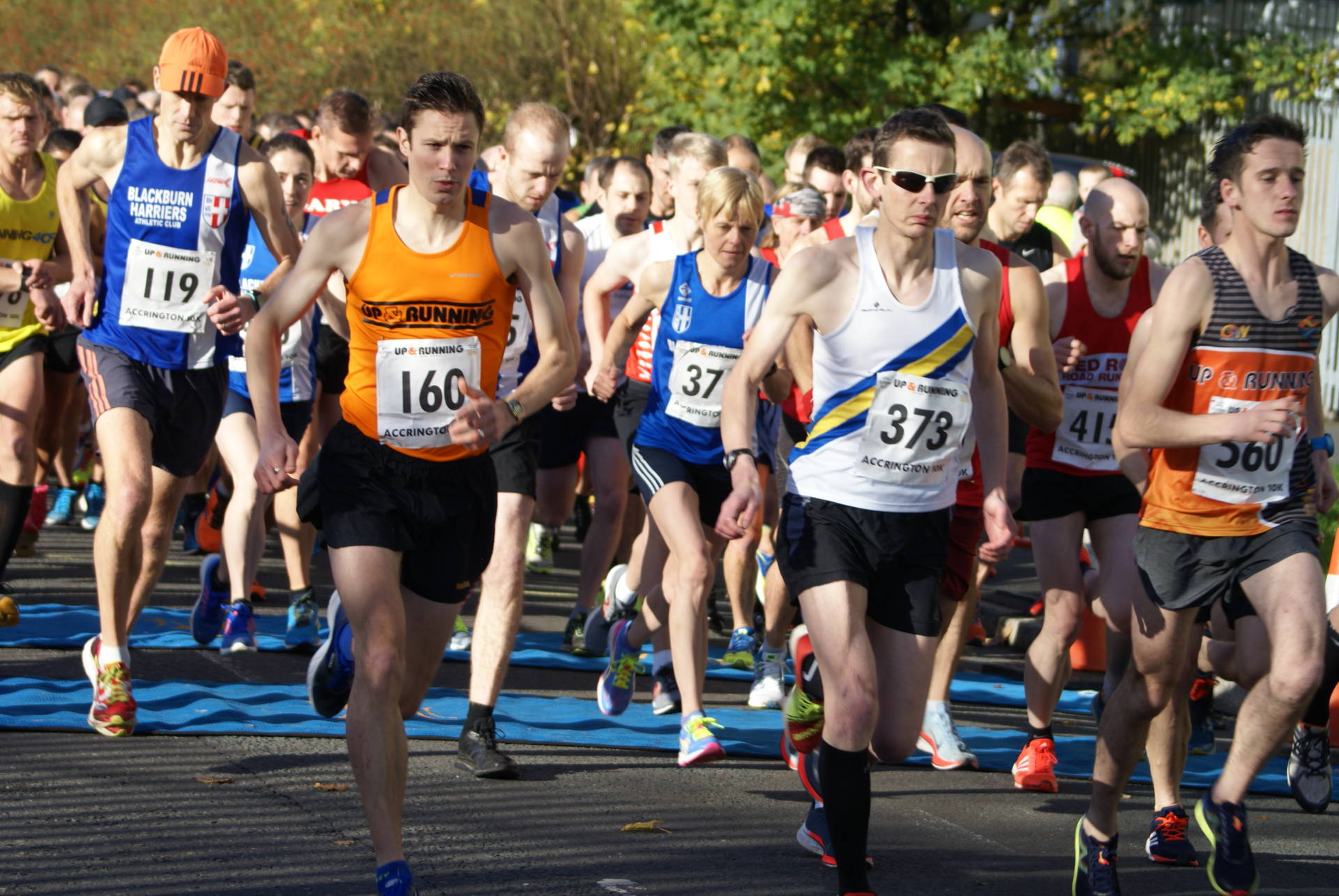 The sun shone on the Accrington 10k on Sunday Morning – 29th October – as five hundred and twenty four runners completed the Race which was run on a new course for the first time. Miles 3 and 4 were the toughest part of the race with a lot of climbing and they were followed by a downhill finish which was quite steep in places. The sun also shone on the Harriers performances who had a clean sweep virtually of all the prizes as they won the Race, won the Women’s Race, won the Men’s & Women’s Team Races as well as winning 5 of the Veteran Age Group Categories. 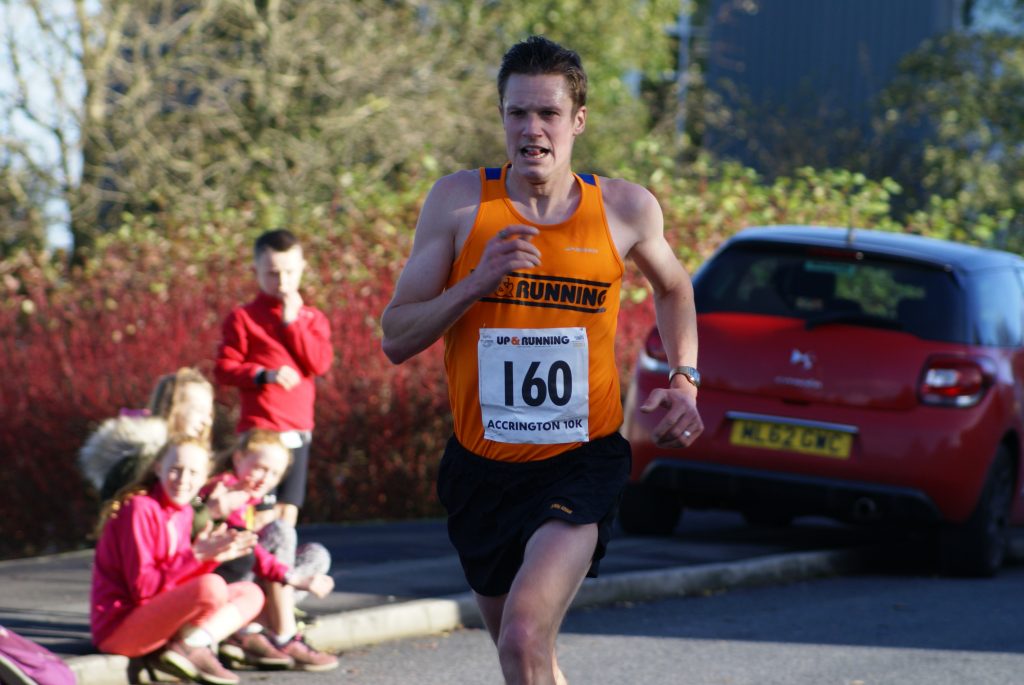 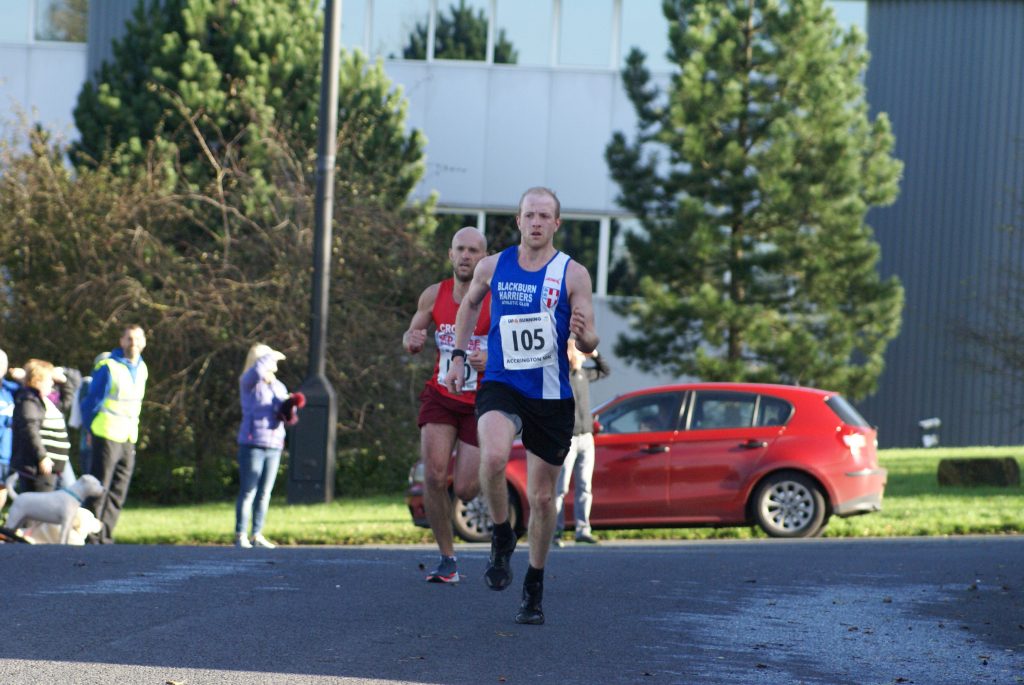 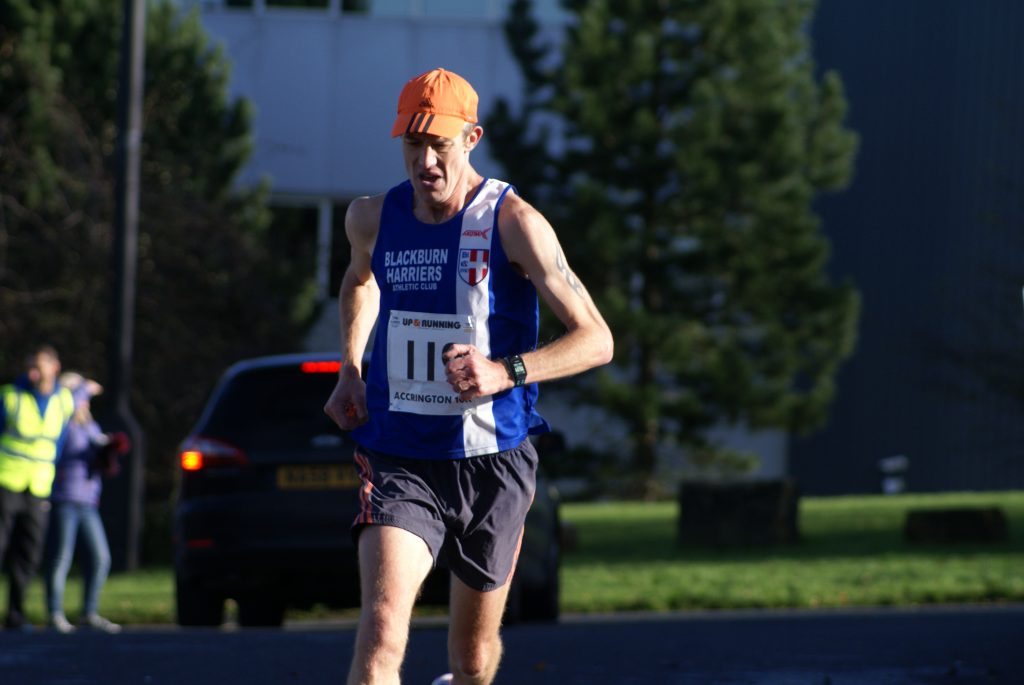 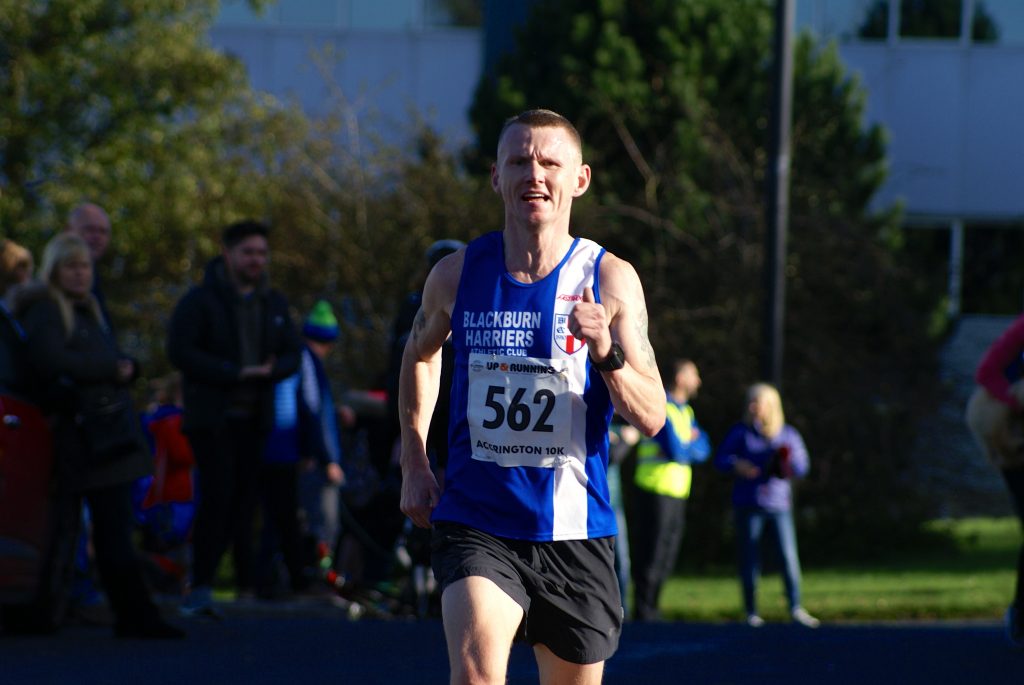 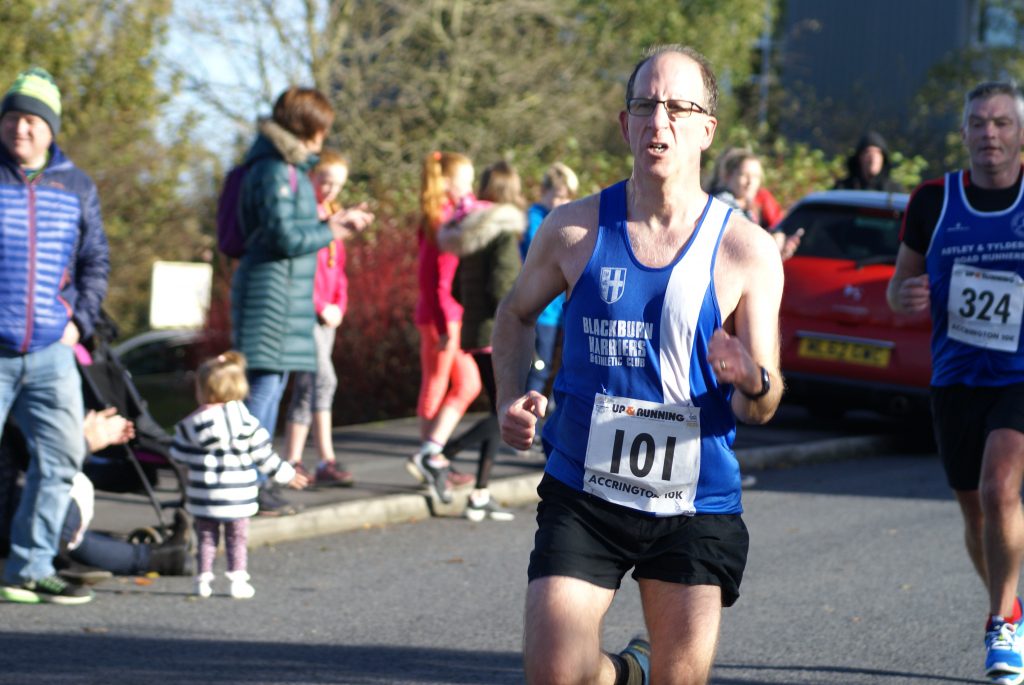 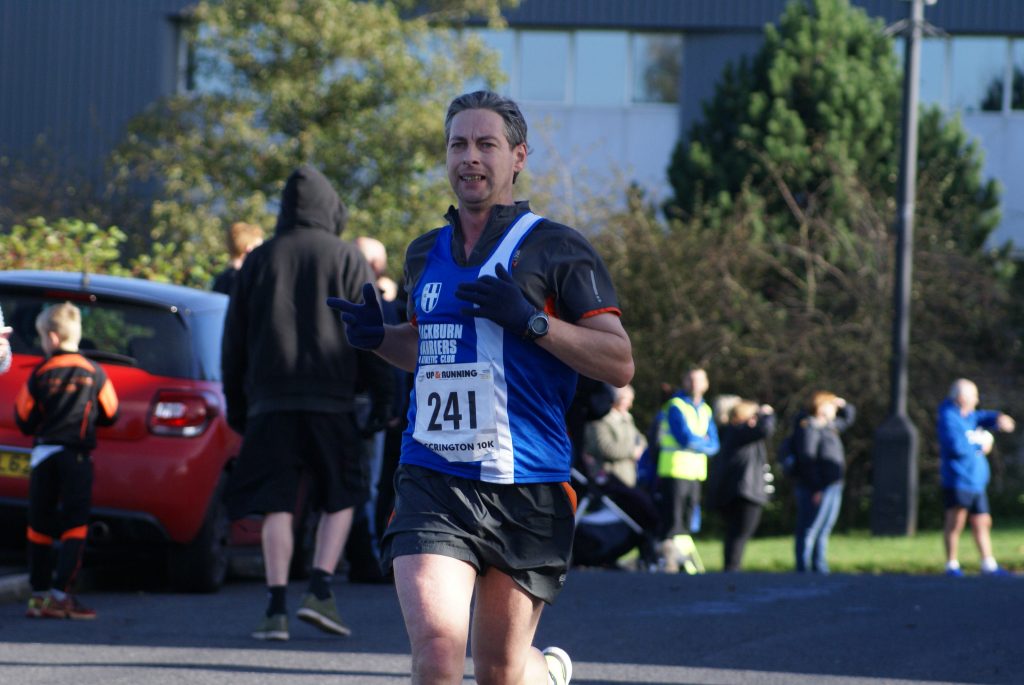 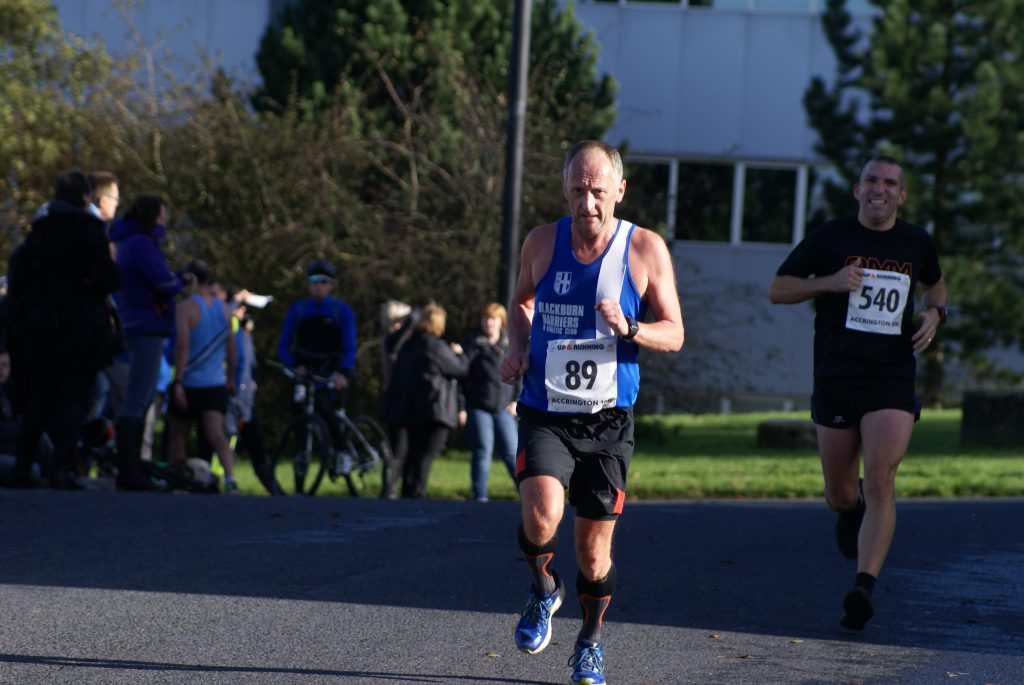 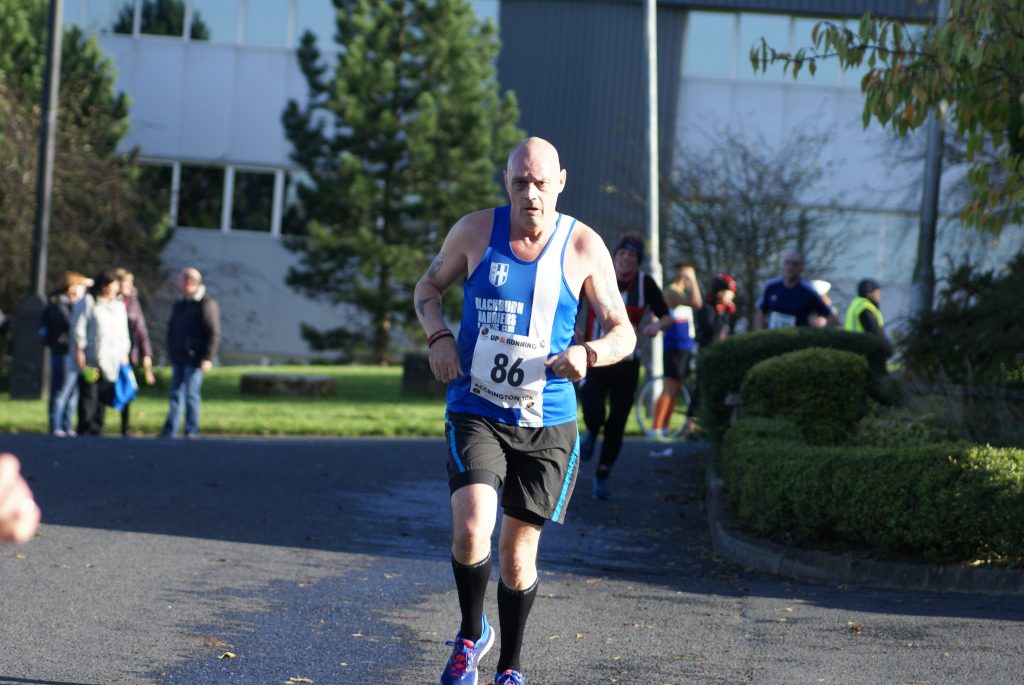 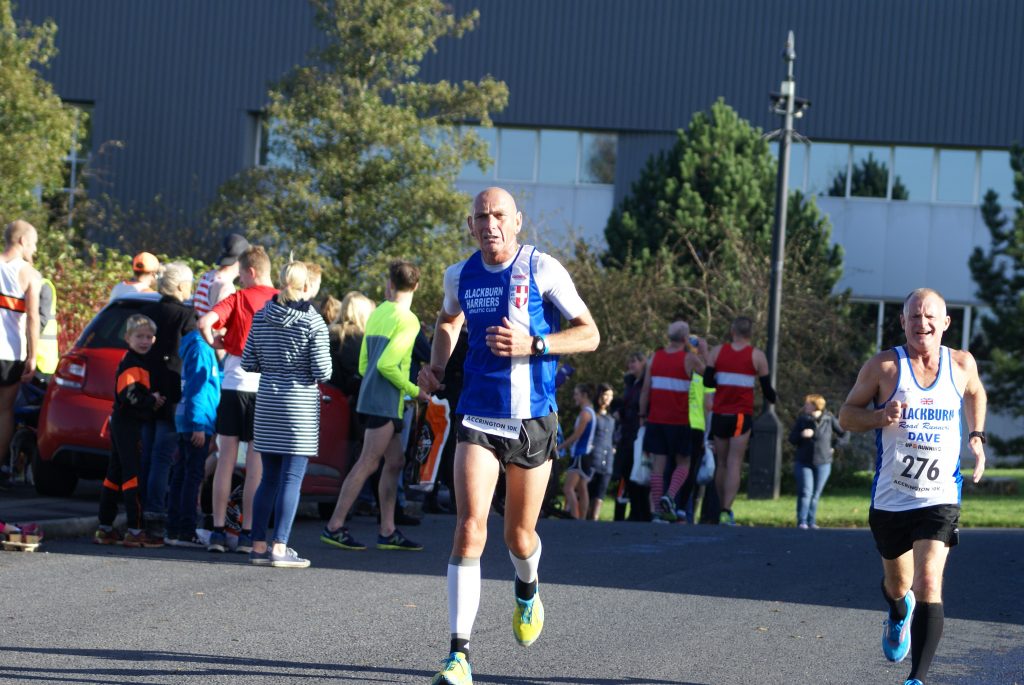 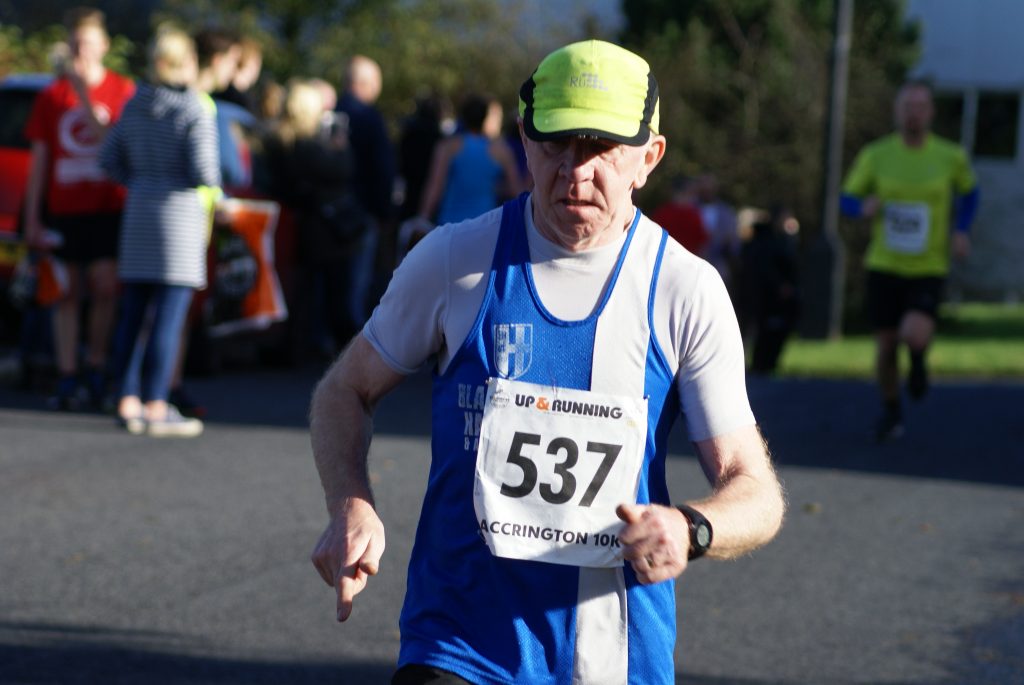 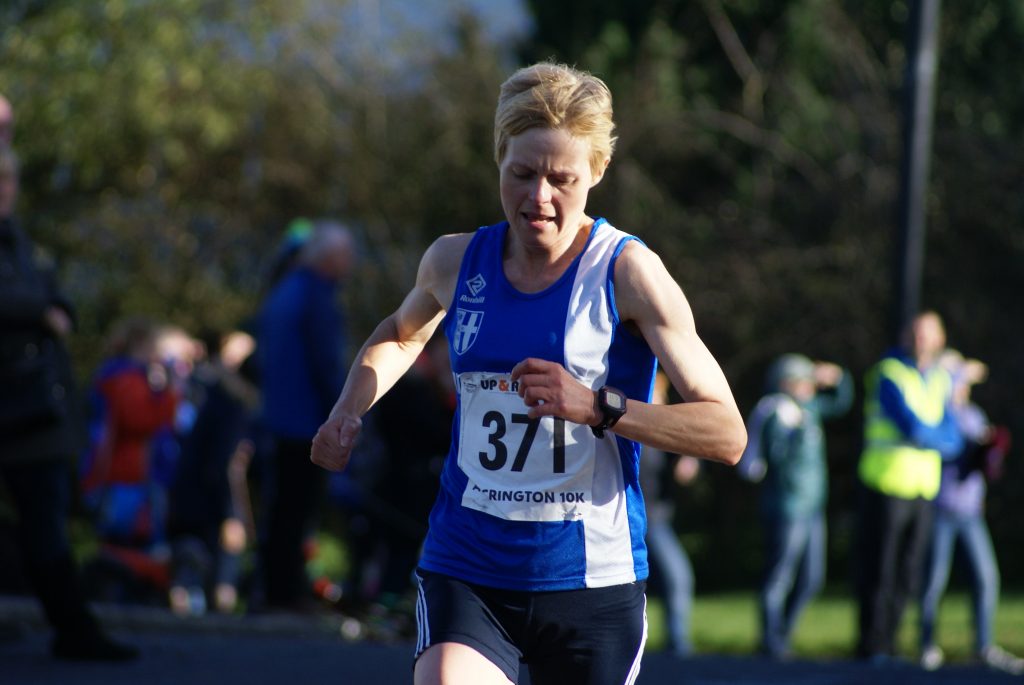 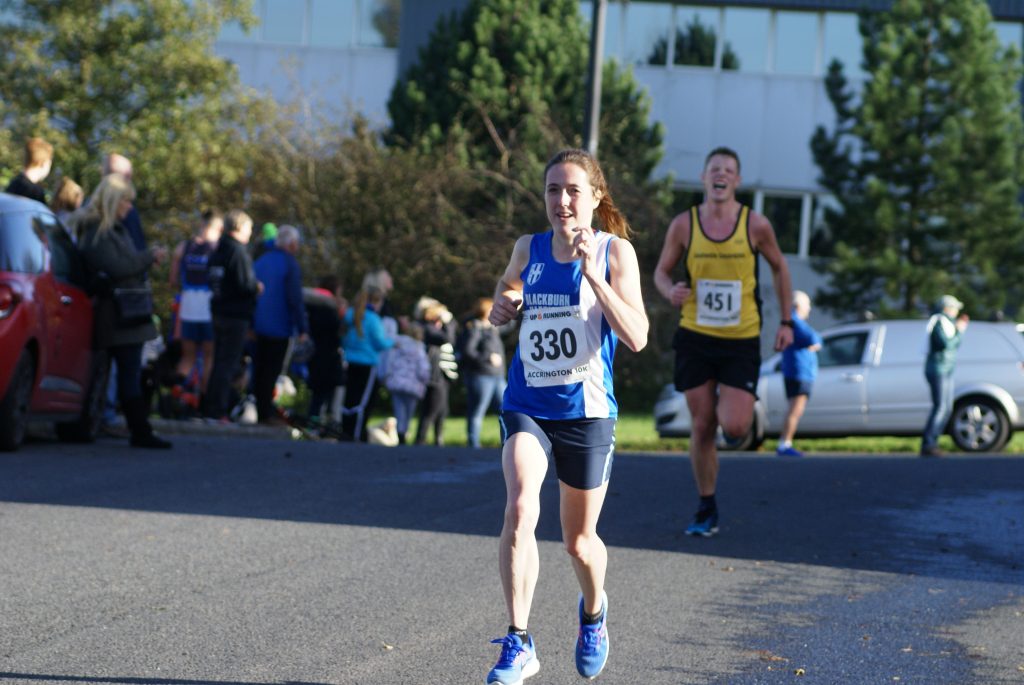 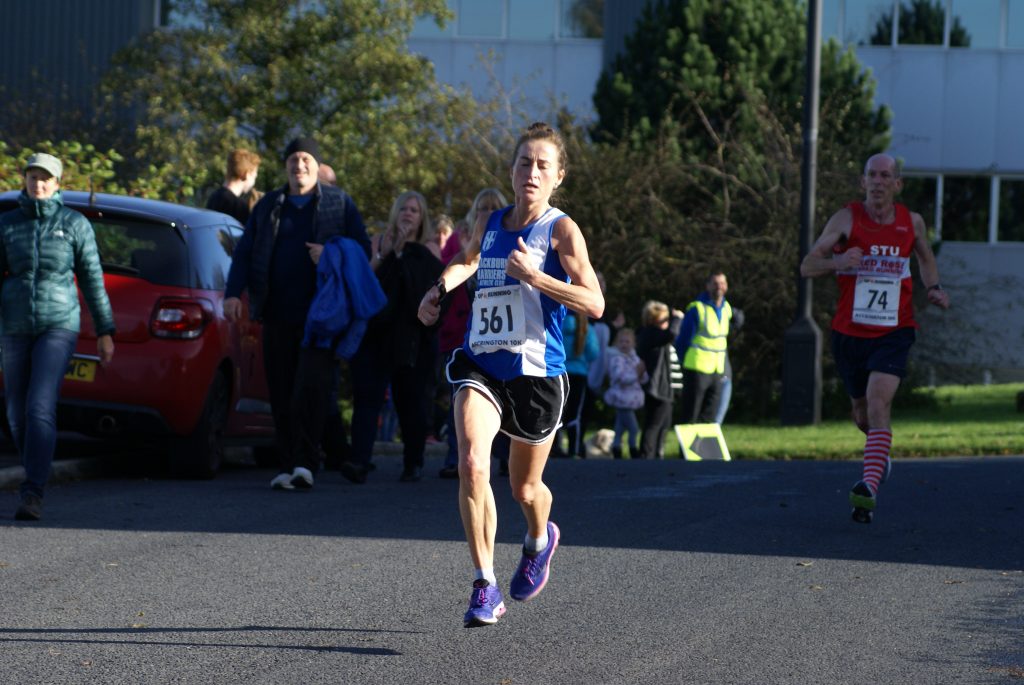 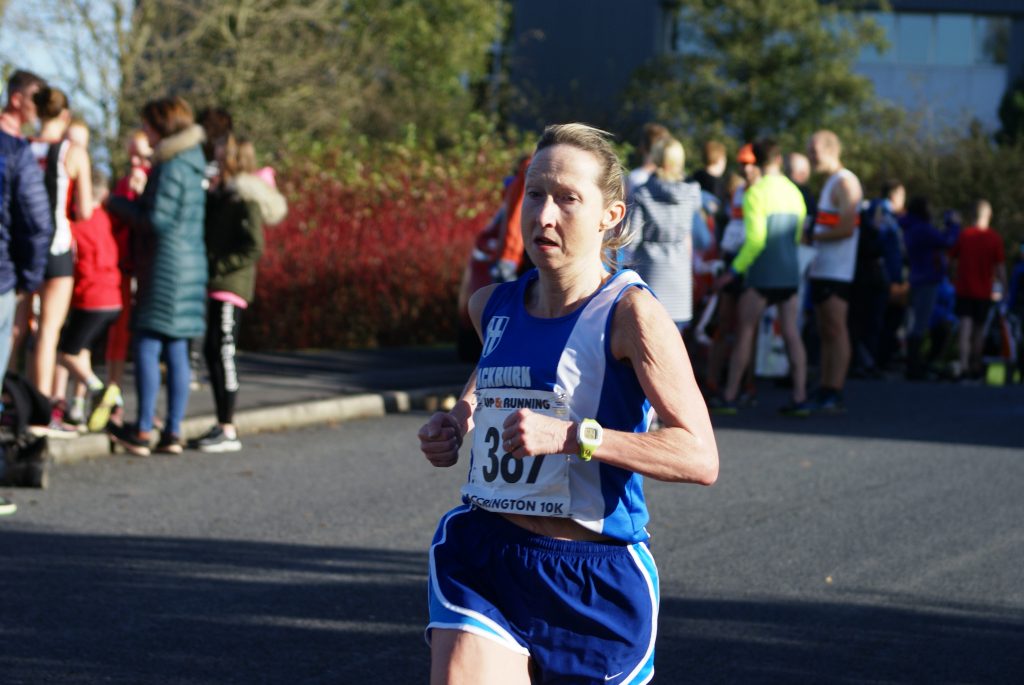 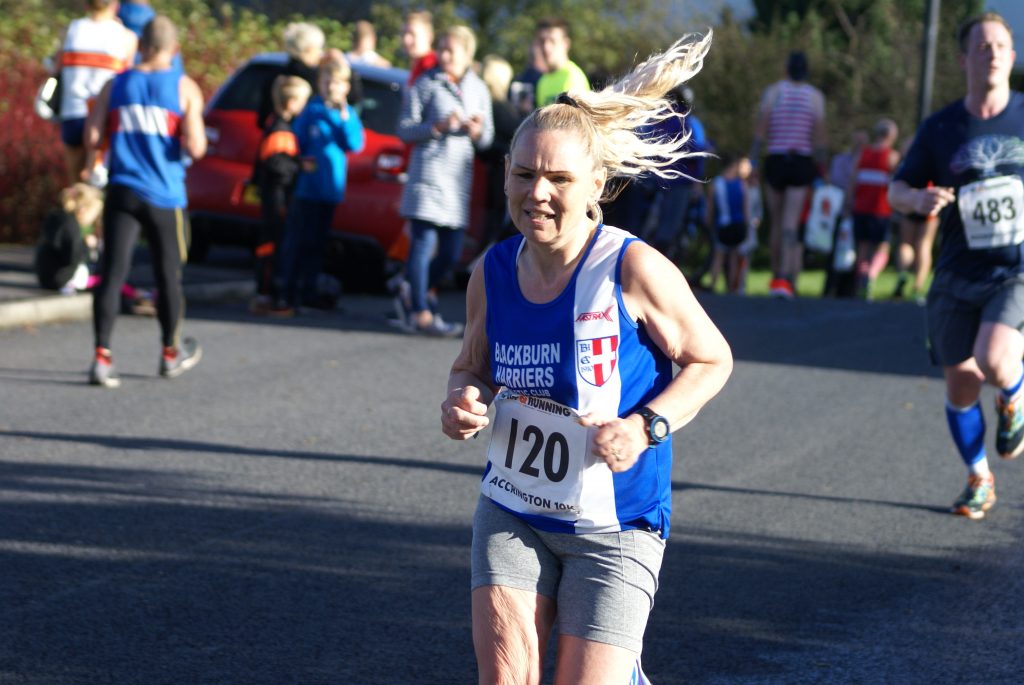 The Race featured 321 finishers and was run in pretty bad wet and windy conditions. Joe Monk who last week smashed his half-marathon personal best in Manchester – (70.45) – leaving him 5th in the National U20 Half-Marathon Rankings was out again on Sunday coming home 2nd in this 5 mile Race in a time of  27.23. 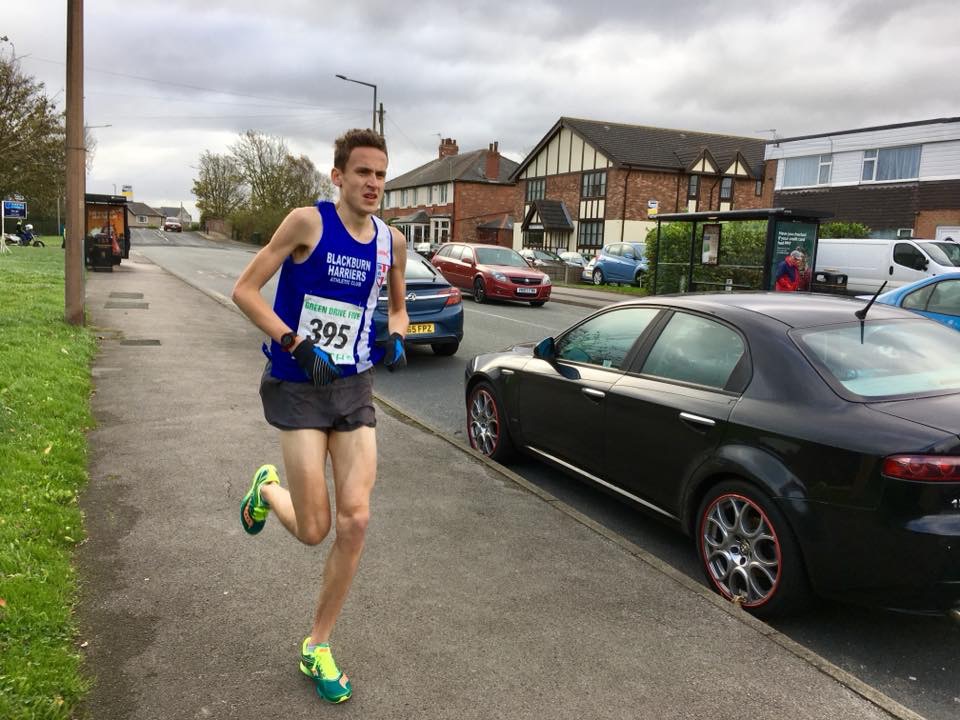 Carly Edwards ran a very good race to take 47th spot in a time of 34.51 just seconds outsider her previous best time and was happy with how the Race had gone for her commenting“I am really happy with my performance at the Green Drive 5. I am always attracted to races with a quality field. I knew I would get that with it being a championship race. The conditions on the day were less than favourable with flooding and a headwind from mile 2-4.5. I managed to run just 5 seconds off my pb which i am happy with and it shows the recent changes to my training are working”.

A Grand Day Out in Cumbria – Sunday October 22nd

Rain and more rain impacted upon the Race which had to be shortened because of the conditions but that didn’t stop John Orrell from taking the Race on. Back on the Fells racing after having a break from his last round of Fell exploits which included the famous Ben Nevis Race John came in 23rd overall in the up and down race with a time of 32.01.

After drying off, John told the Club about the race and its background saying “A Grand Day Out in Cumbria was set up to raise money to help those that were effected by Storm Desmond back in 2015. This weekend in the Langdales, Storm Brian dampened the fund raising efforts somewhat, but I still had my Grand Day Out!  The Stickle Grind was shortened to the half Stickle as the route to the top of Harrison Stickle was considered too risky by the race organisers. It was really wet and windy and Stickle Ghyll was in full flow. The route across the stepping stones was impassable so we were turned back early. What was an up hill time trial became a short rough technical there and back. I finished 23rd in a time of 32.01. Once dry I rewarded myself with Herdwick lamb and stout stew with a pint of Dry Stone stout to wash it down! Next week it’s the Really Wild Boar. The race I mean not another casserole!” 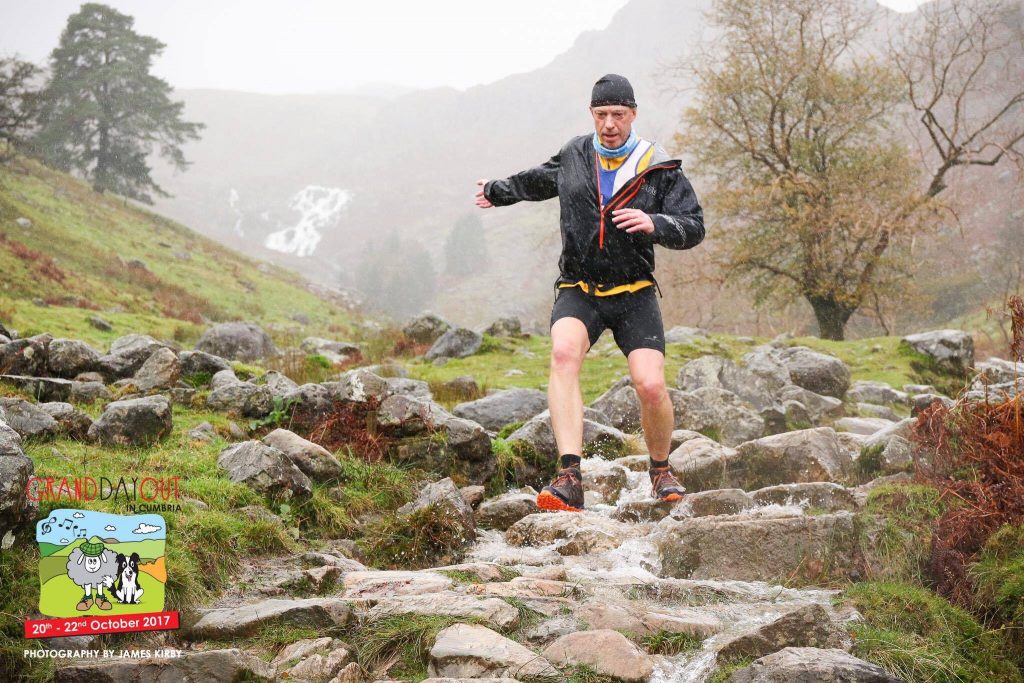 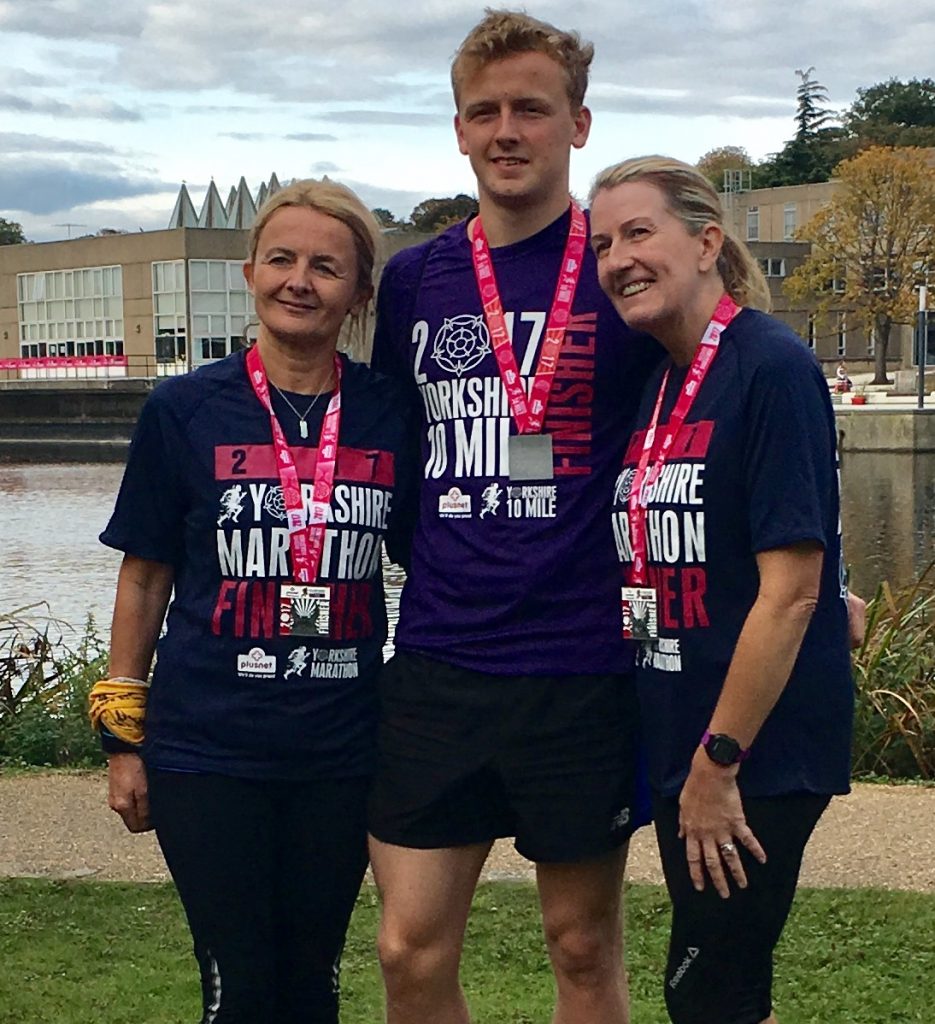 Well done to V50 Clare Wilkin who recently completed the Yorkshire Marathon in 3064th position with a time of 4hr 54.21 – Clare hadn’t been able to do the training she would have liked because of injury but neverthless, went ahead and did it.

Afterwards Clare spoke to the Club about her experience – the first time she had ever run the distance telling us “I survived my first marathon! Almost didn’t do it as severely hurt my back at work 4 weeks ago, not long after Garstang. I even struggled to walk then. Only got back up to 8 miles the week before the Marathon. I ran the whole marathon in a lumbar back brace and it held up! Did think it would be a walk/run but ran the whole lot and got interviewed whilst running in my Harriers vest, not sure if Channel 4 or 5?” Probably not the best idea to do it injured but being a stubborn 52 yr old I didn’t think I’d get the chance again! My older son did the 10 mile event there and looked after me! 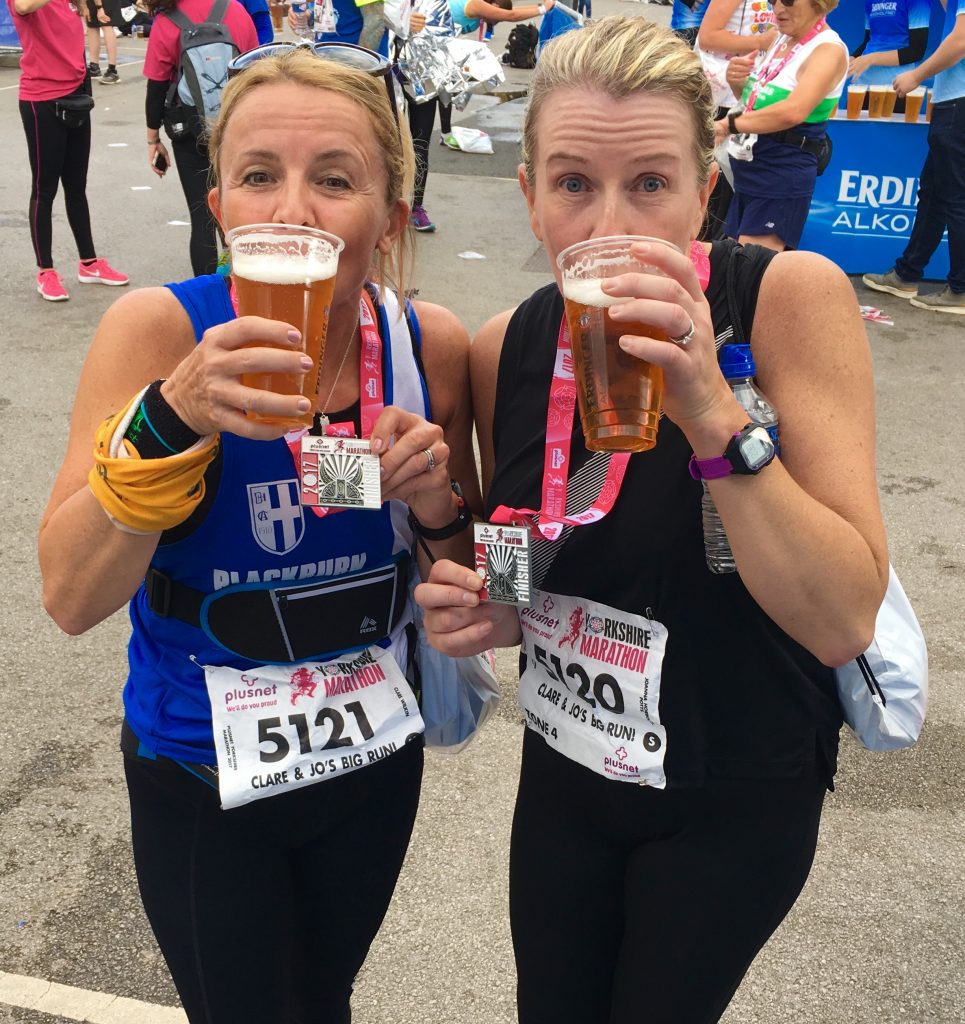