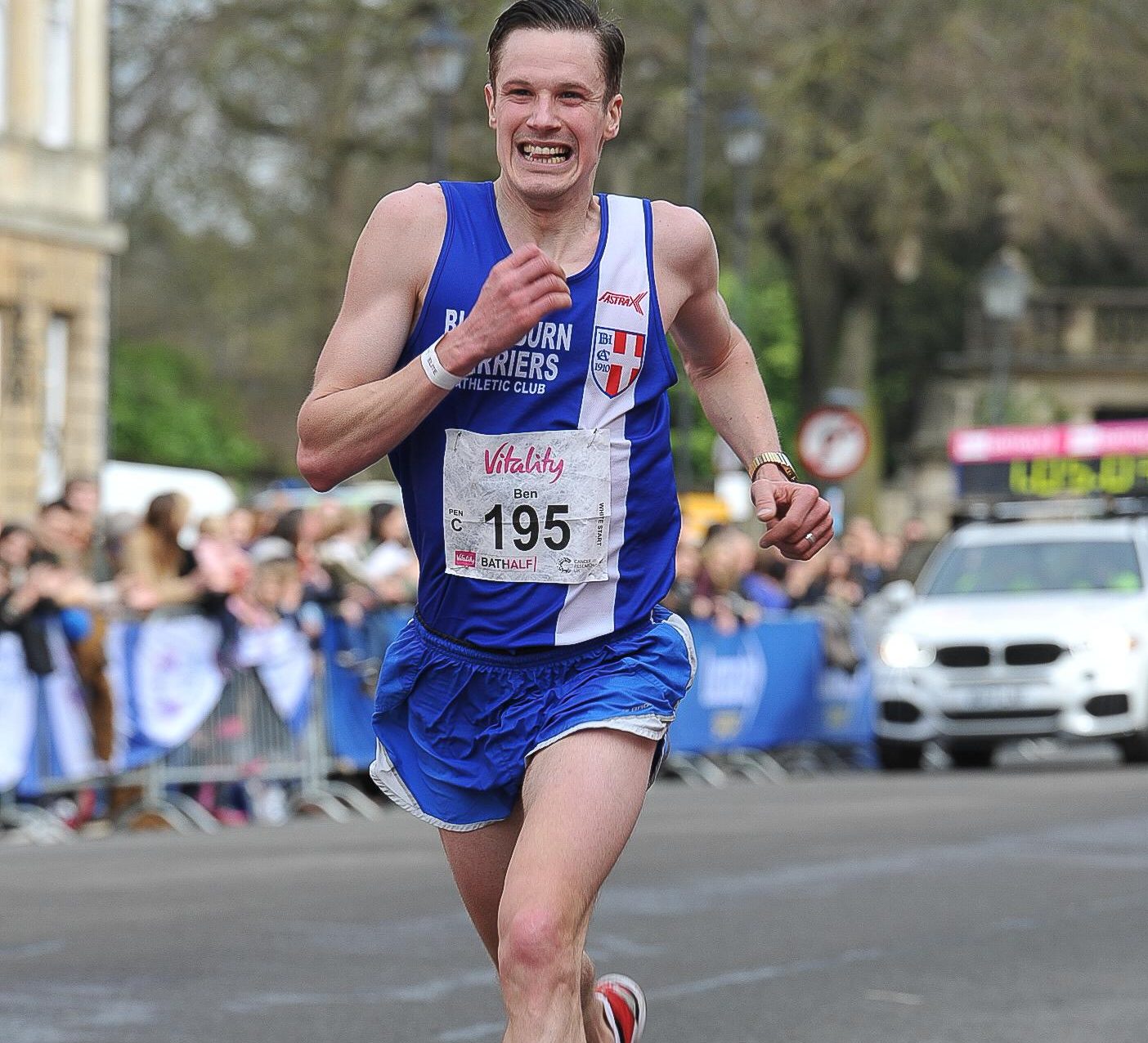 Ben Fish is in great form at the moment winning back to back Half-Marathons at Bath and Hastings over the last two weeks. At Bath with 12570 finishers Ben won in a new PB time of 65.16, a time which saw him over a minute in front of 2nd placed Peter Huck. After the Race, Ben spoke to the Club telling us that he “was hoping to run a pb and definitely feel I’m in my best ever form. However, I was surprised that it was enough to win. I had this race pencilled in a while ago and was expecting to get an ass kicking, hoping to make top 5. The standard wasn’t as high, but I was really pleased with my run, I went to the front from the start and got away from Peter Huck by six miles”. 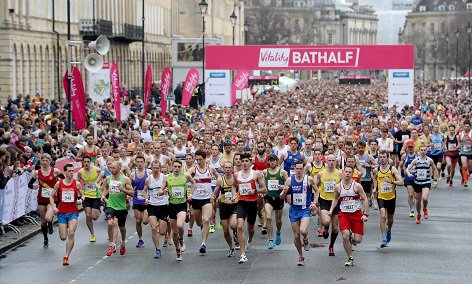 One week later Ben was out at the Hastings Half-Marathon – 2251 runners –  in pretty bad weather conditions but still recorded another win which makes it the fifth win out of six races so far this year with a 2nd place in the other. Ben told the Club after crossing the finishing line in Hastings that “it was very windy on the promenade in the last three miles. Very happy with the win and happy with the time considering the weather”.

This local 5k Race run on an enclosed cycle track continues to put together good fields and the latest on March 18th was no exception. Thirty five runners in the A-Race which was won by Matt Clowes in 14.27 and the first six athletes all came in under 15 minutes. Joe Monk, Jack Hindle and Tom Blaney all ran for the Harriers and all produced new PB’s which is a great sign the week before the Northern 12 & 6 Stage Relays at Blackpool. Joe placed 12th in 15.34 – a new PB by 17 seconds commenting that he was “Pleased with the run, felt strong but as the wind picked up it got hard in the last 2km, hope to be sub 15:20 in the Summer months. Well done to the lads on getting PB’s as well” then came Jack in 19th place (16.00) – a new PB by 12 seconds who told the Club “Well done to all the lads. Conditions weren’t nice, but you’ve got to make the best of the situation. I’m happy to PB, but slightly disappointed not to be under 16. There’s multiple times in the race where I know I could have easily picked a second up and more. Nevertheless, a solid run and I felt strong. Which only bodes well for the future”  Tom was next home in 21st spot (16.09) which was a massive new PB by 42 seconds “Recently i have  tried setting myself reasonable targets with races to avoid any unecessary pressure before the race which helps me relax and pace it properly. My target was 16.20 so 16.09 will do nicely and it sets me up to aim for a sub 16 in the near future. The race itself was excellent, i much prefer running in the dark and the standard was incredible just what you need when aiming to set PB’s. Well done to all the Harriers, some quality times on the day!”

In the B-Race thirty eight runners lined up including five Blackburn Harriers in not very good weather conditions given the wind which makes the times all the more impressive. Matt Nuttall finished 2nd overall and 1st V45 in a time of 16.57 with Derek Reilly one place further back in 3rd (17.06) a time which gave him a new PB by nearly half a minute. Liz Greenwood had a great run finishing 12th overall in a massive new PB time of 17.33 and 3rd Woman on the night telling the Club afterwards that “I really enjoyed the race and it was a great event. I felt quite strong throughout and was really pleased to come away with big 5k PB despite the miserable weather”. 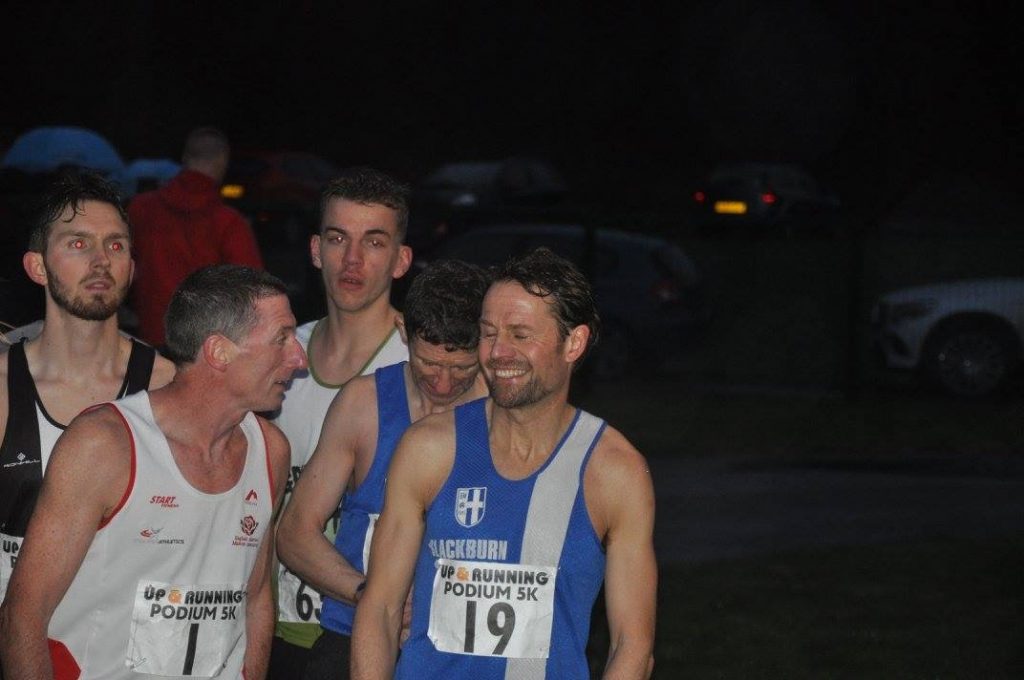 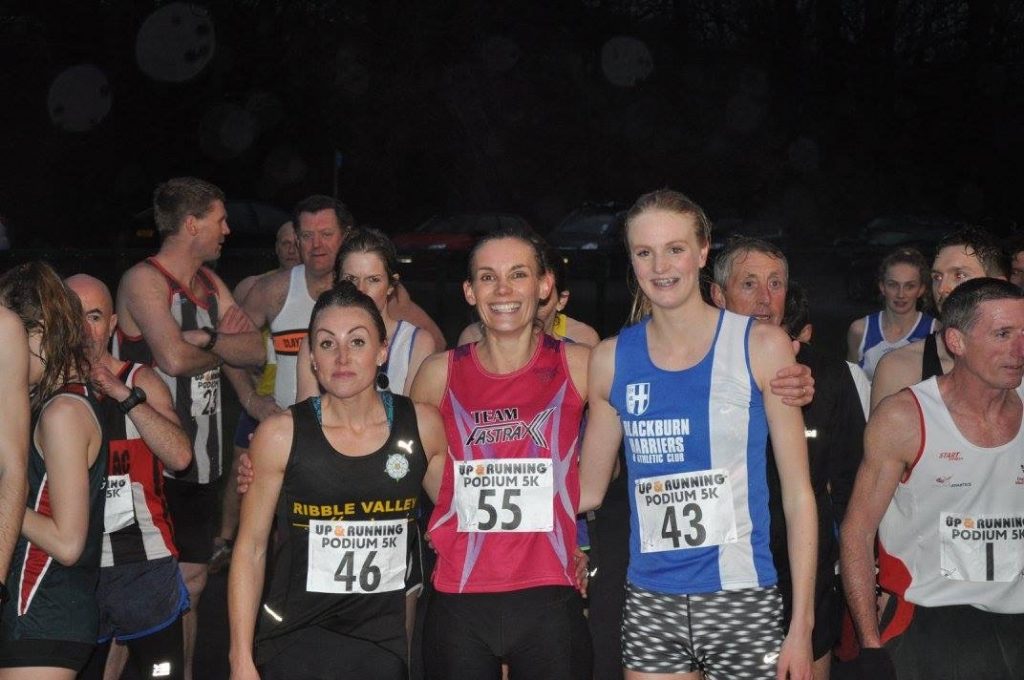 U15 Harry Wilkin ran his first ever 5k Road Race and did really well placing 29th in a time of 20.11 which shows good promise having only just started to compete over the past five months. Carly Edwards also had a very good run with a time of 20.39 commenting that she was “really happy with that as it’s massive improvement from my 21.26. The B race was full of good runners last night. It was quite apparent when I set off that it was going to be a fast race. I just ran my own race and tried to maintain my pace. I saw the clock before I ran my final lap but the wind on the top section made it impossible. I think at this point I had the laura muir gritted teeth expression”. 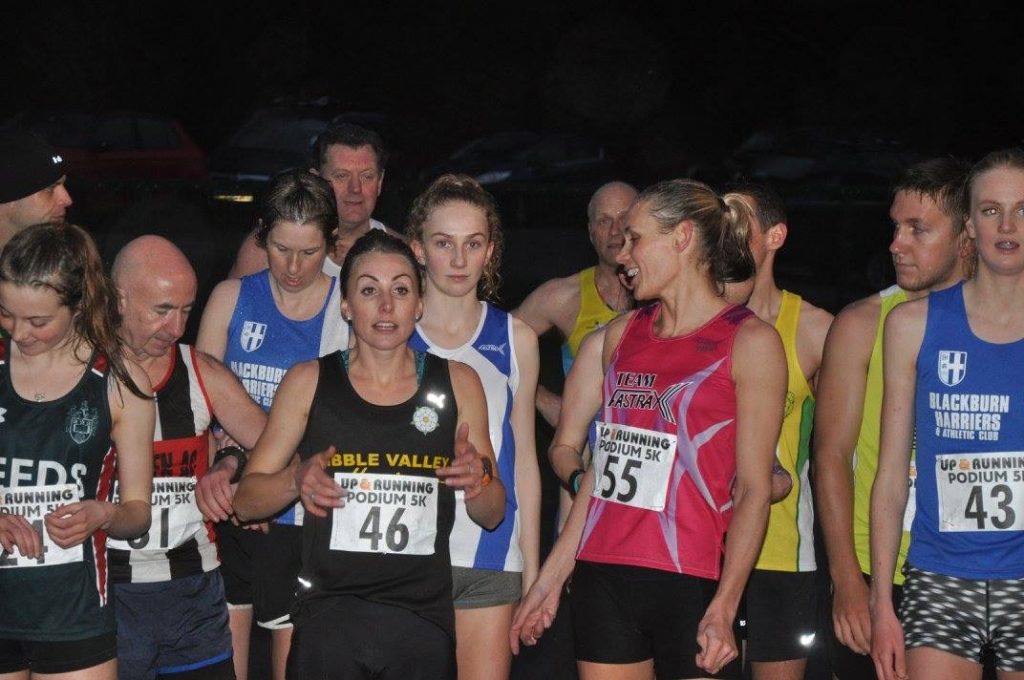 Carmen Byrne was making her debut for the Harriers and at the same time running her first 10 mile Road Race since March 2016 and only her second since 2008. Carmen finished 23rd overall in the two hundred and seventy one strong field with a time of 65.51 and was 1st V35 and 3rd Woman on the day too. Afterwards, Carmen told the Club that “It was great to pull on a new club vest, and I could definitely see the benefit of the Tuesday speed sessions over the last 3 miles”.

The run of the day for the Harriers at English Schools came from Matt Ramsden who finished 25th out of the 345 runners in the Junior Boys Race (13.08) and told us that “Because this was the last cross country of the season I wanted to have a good race that I would be pleased with and I am more than pleased with the race yesterday especially considering it was against the best in the country”. Matt was 1st counter for Lancashire and had great back up from Sam Hodkinson (100th) in a time of 13.43 and Jamie Teare (125th) in 13.52. Jamie commented after the Race was over, saying that it was “An amazing experience, finished 125th overall which I think was respectable seeing as I started seventh in the pen so I got held back quite a bit. Well done to everyone who ran”  The lads took three of the first four counting places for Lancashire which was a great performance.

Amy Davies competed in the Junior Girls race and had a very good run to place 61st out of 344 runners in a time of 11.48 a time which made her second counter for Lancashire. Speaking to the Club Amy told us that it was “Another great experience, a bit disappointed with my race and felt like I could have done a bit better but overall it was another great weekend and I was happy to be a part of it”. 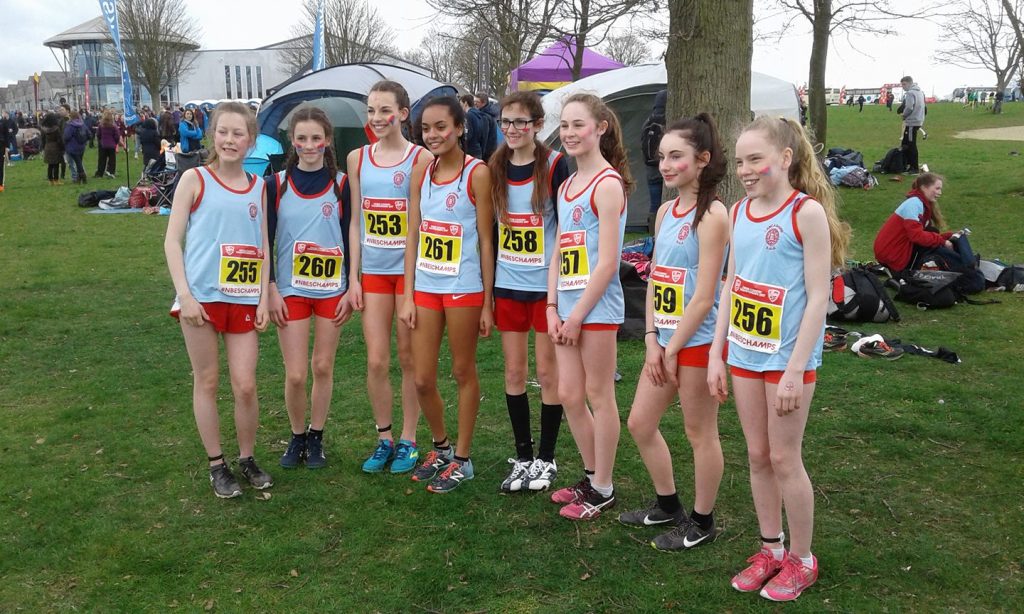 Madie Elliott also had a good run in the Inter-Girls Race and was 1st counter for Lancashire coming home in 102nd spot (14.03) with Lancashire placed 25th out of the forty four Counties competing. Afterwards she told the Club that “The English Schools is always my favourite event of the year and it’s a great experience to race there. I’m quite happy with my race although for once a hill would have been nice as the course was so flat and fast”. 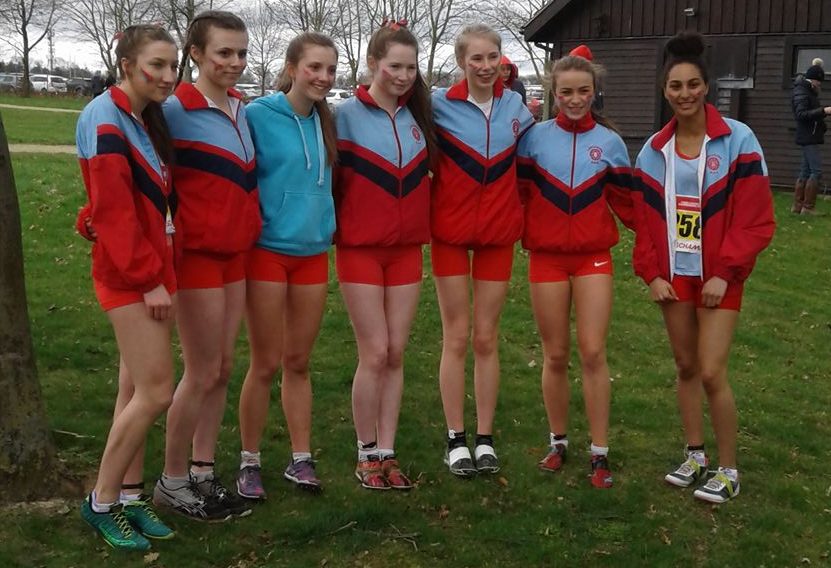 Nick Smith placed 190th in the three hundred and twenty four strong Senior Boys Race and placed 6th counter in a time of 25.20 with Lancashire finishing 11th Team out of 39 Counties. Nick reflected on the Race over the weekend and told us that “The English Schools was a fantastic experience and I really enjoyed competing for the county for the first time. I was really impressed with my place, especially after starting as eighth in the pen. I hope to be back competing at next years event, where I can hopefully improve my position”.

Down at Loughborough this year for the Inter-Counties with Rob Warner and Tim Raynes competing for Lancashire in the Senior Men’s Race. Both had great runs to help Lancashire finish 7th County out of thirty two with Rob placing 50th (43.16) – 2nd counter –  and Tim 87th (42.00) – 5th Counter.

Victoria Mousley got called up for the Senior Women’s Team which finished 8th out of the twenty seven Counties competing and she finished 133rd with a time of 35.14 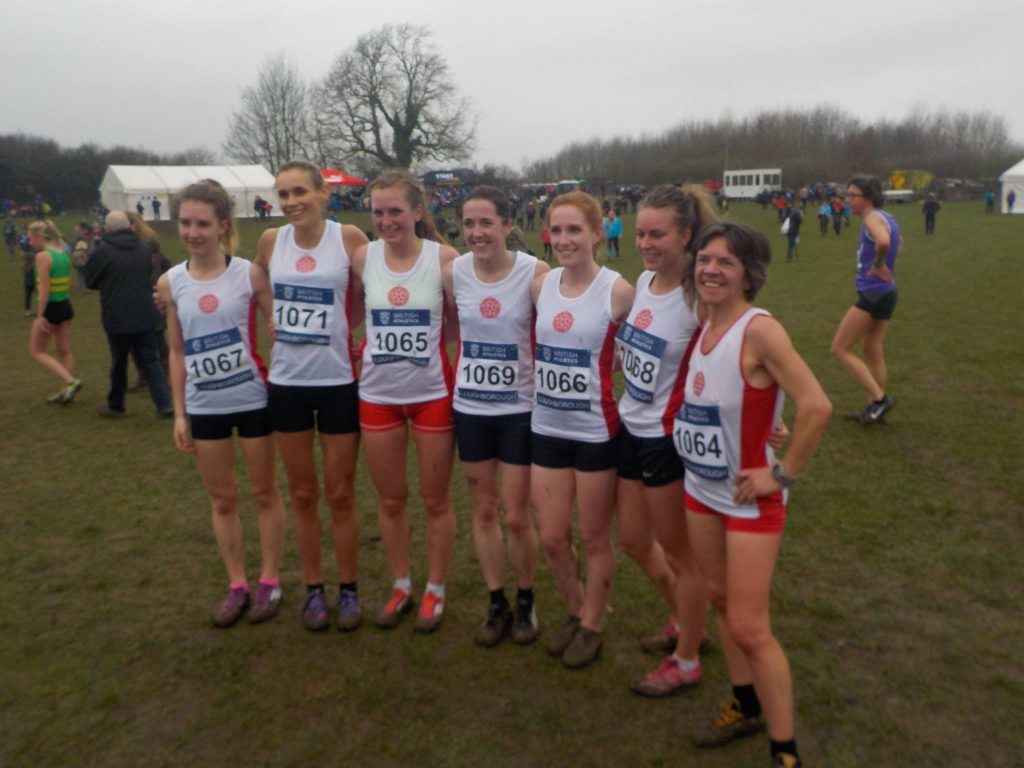 Maddie Elliott place 59th out of 183 and was 4th Lancashire Counter with a time of 29.00 in the U20 Woman’s Race – Matt Ramsden took the 3rd counting spot in the U15 Boys Race, placing 59th out of 295 in a time of 17.37 with Leon Thomas in 117th position (17.58). It shows how close these championship races are when you consider there was just 21 seconds between Matt and Leon but that represented 124 places. In the U15 Girls Race Amy Davies finished in the 4th Lancashire counting place placing 144th overall out of 295 in a time of 17.42, whilst in the U13 Races – Harvey Ashworth came home 148th (13.19) out of the field of 297 runners and in the U13 Girls Hollie Cubbon took the 4th counting spot for Lancashire coming home 140th out of 304 and backed up by Eleesha Charnley who was 207th in 14.59. Both girls had a really bad start as there was a pile up in which they fell and then had to stop. Hollie tried to work her way up field and managed to pick a lot off on the hills but got boxed in along the way so hard to overtake. 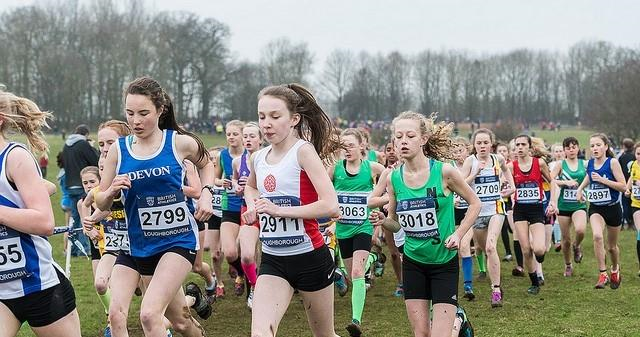 Seven Blackburn Harriers out in this local and very popular race featuring 218 runners along with an amazing one hundred and eighty seven youngsters in the Junior Race. 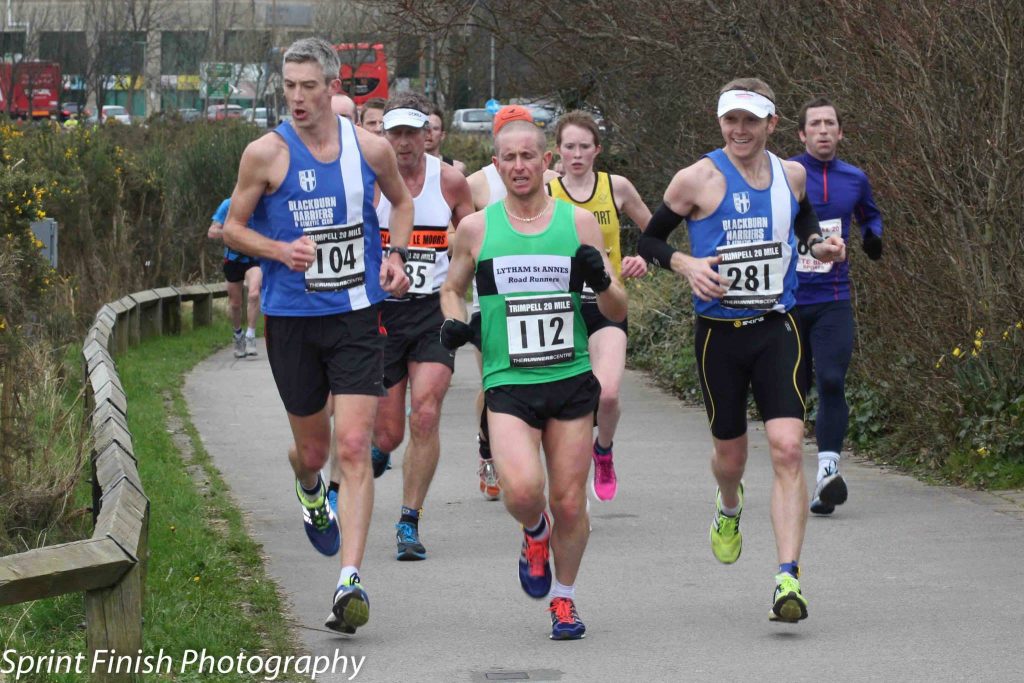 In the Daffodil Doddle Amy Davies ran 7.55 for 3rd place overall and 2nd U13 – the race incorporating all age groups from 7yrs and above. Isabel Hartley placed 16th overall (8.46) with Kate Cookson 29th and 2nd in the F11 age group (9.04). Hannah Davies came home 47th overall in 9.33 and was 1st in F8 age group. Daffodil Doddle Results⇒HERE