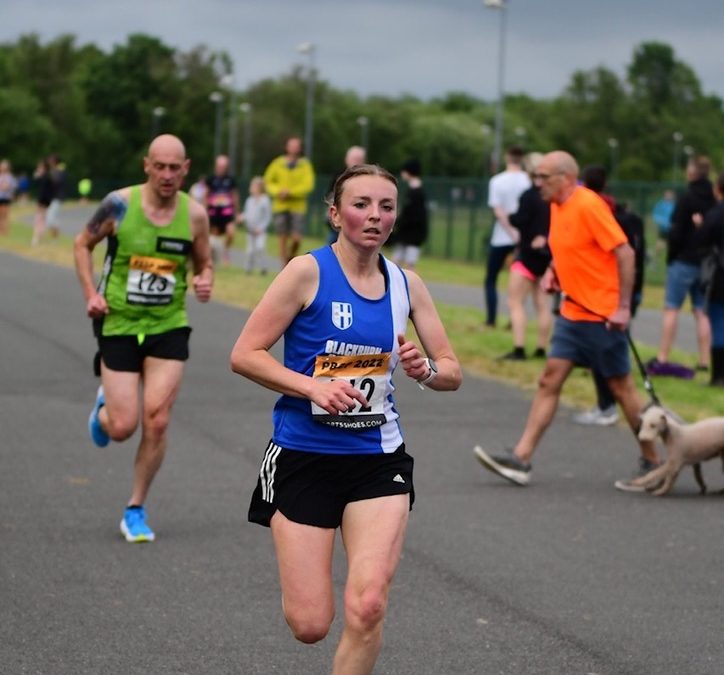 Freckleton Half-Marathon time and that means Ben Fish who has won this race so many times, it almost feels like his own. (RESULTS). With two hundred and seventy five runners finishing the Race in not the best of conditions for endurance races, Ben won again in a time of 71.29 from Blackpool’s Marco Parolin in 2nd (72.53) and West Cheshire’s Michael Young in 3rd (73.02). Speaking to the Club after the Race he told us that he was “Happy with the win, I was wanting to run quicker than that but it was pretty tough out there, hot and quite windy.“ 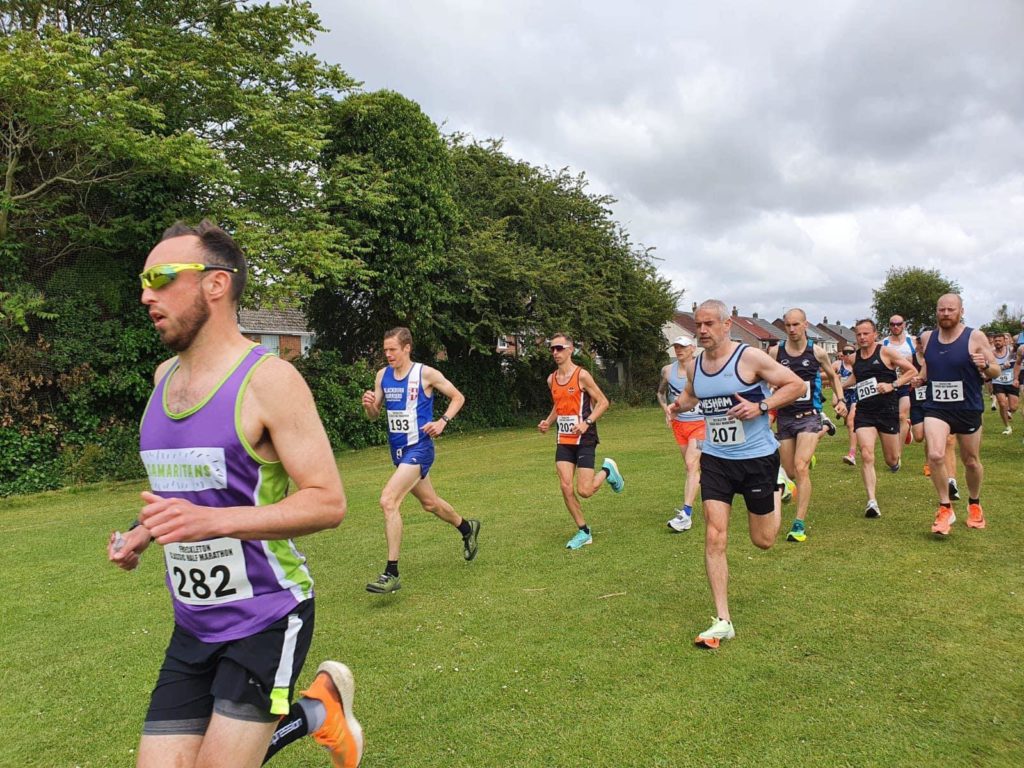 Jess Judd was in a stacked field when competing at the Bislett Games – Wanda Diamond League – on Thursday evening June 16th in the 5000m (RESULTS). The first three all ran sub 14.30 with the next five athletes all running sub 14.40 with Jess just 00.17 outside 15 minutes. The calibre of the race can be seen in the breakdown of the results with two national records and seven new personal bests being set in the race. Posting on her social media after the race Jess commented on the race “Loved racing at Oslo 8 years on from my 800m PB!! Sadly no PB this time, unless you count my 8:51 3k time which would be an official PB for that distance🤣 sadly the wheels fell off with 4 laps to go and I made some tactical errors but I loved testing myself with the best in the world! Let’s just not talk about that last 1k😳🙈😩 15 minutes would have been a big breakthrough for me last year, but distance running is moving on so I need to be better, no excuses-just not my day today!!👎HUGE congrats to fellow @hoka athlete @gal_lau on her National Record!! What a hero!”

BMC Gold Standard night again at Trafford on Tuesday June 14th with three Blackburn Harriers athletes lining up at the start of the 1500m races. (RESULTS).

Callum Davidson lined up with a seven strong field in the A 1500m race which was won by Chestefield’s Alex Ediker (3.48.34). Matching his time run in his first 1500m race this season, Callum came across the line in 3rd spot clocking 3.53.60. Luke Betts and Tim Raynes went in the B Race resulting in Luke running 3.56.19 in his first outing over the distance this season in 2nd spot behind the winner – Joe Blacknell (3.55.45) – as Tim came 7th with a time of 3.57.38, just two tenths outside his personal best. 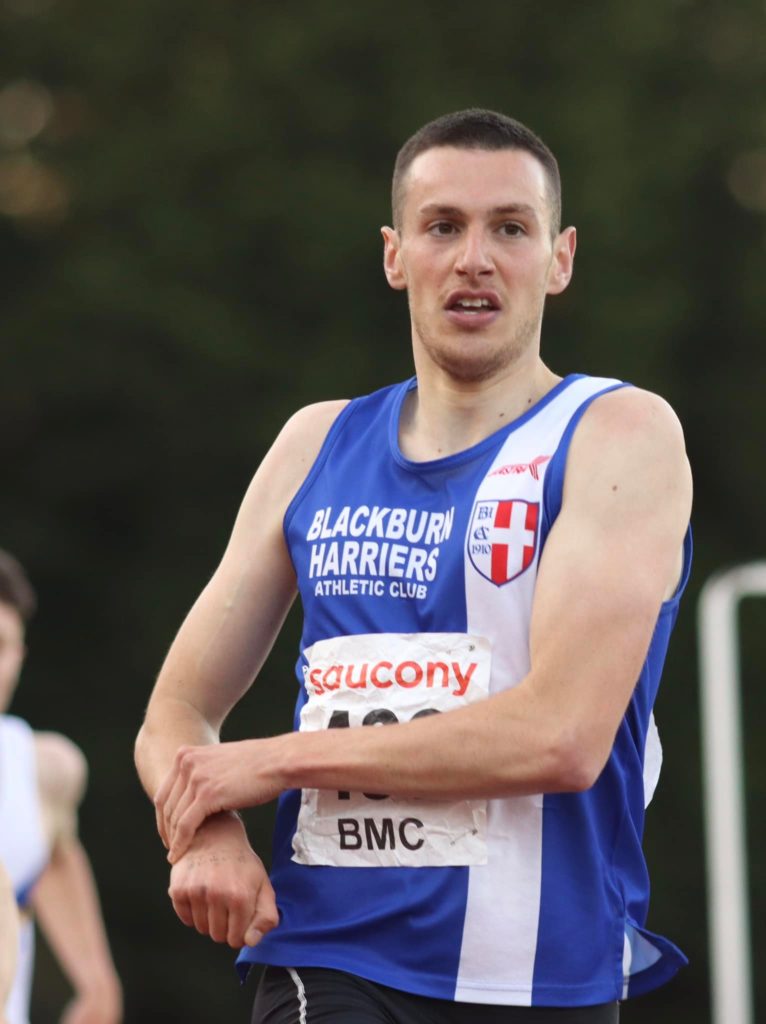 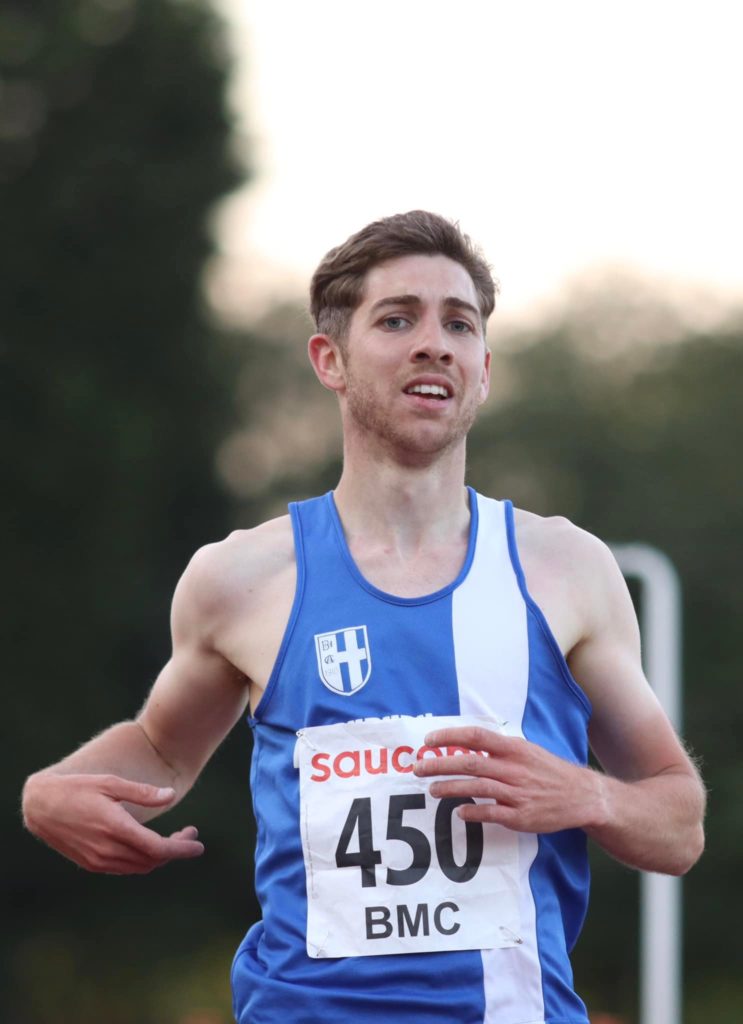 On to the Fells at the Buckden Pike Fell Race on Saturday June 18th which was also a British Championship Race and won by Lochaber’s Finlay Wild in 30.39 from Daniel Haworth in 2nd (Matclock) with 31.07 and Ambleside’s Matthew Elkington in 3rd (32.06). (RESULTS). Over two hundred and fifty in the race and among them, Blackburn Harriers trio Joe Bridge, Jonathan Bridge and Danny Teare. U23 Joe was the first one across the finishing line in 62nd pace in a time of 37.53 followed by V50 Danny in 219th (53.36) and Jonathan in 222nd spot (53.57). 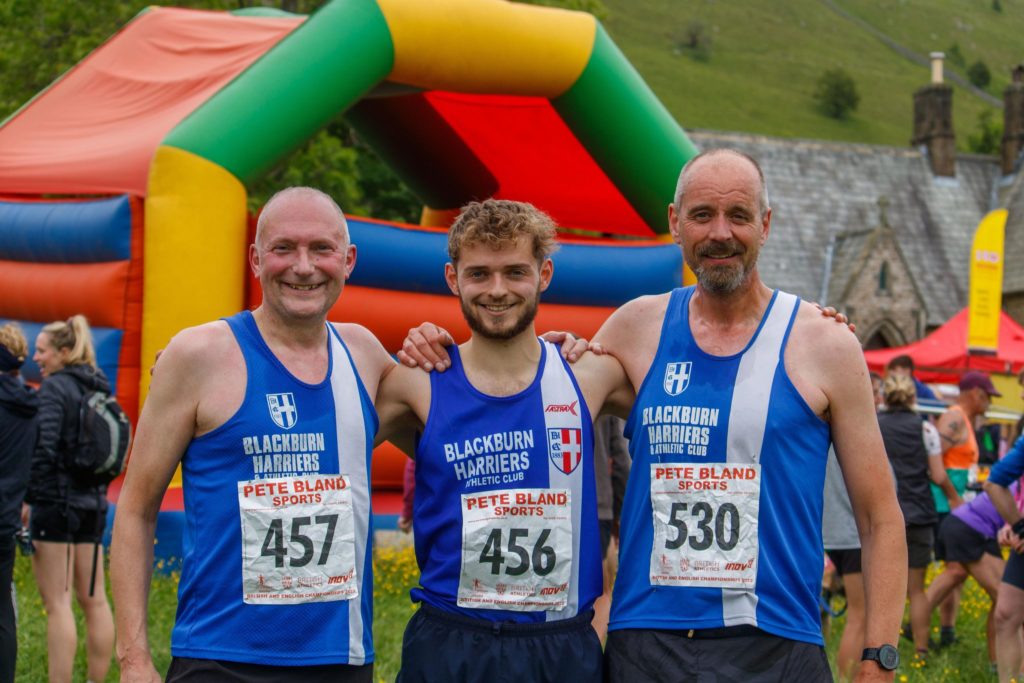 Thanks to David Belshaw for the Race photos 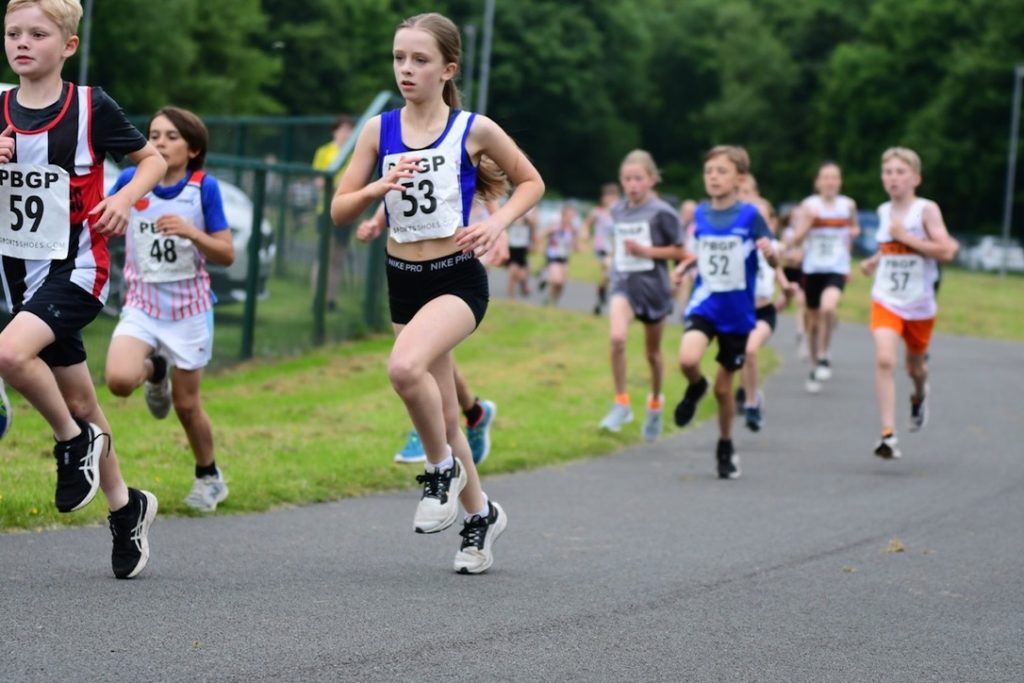 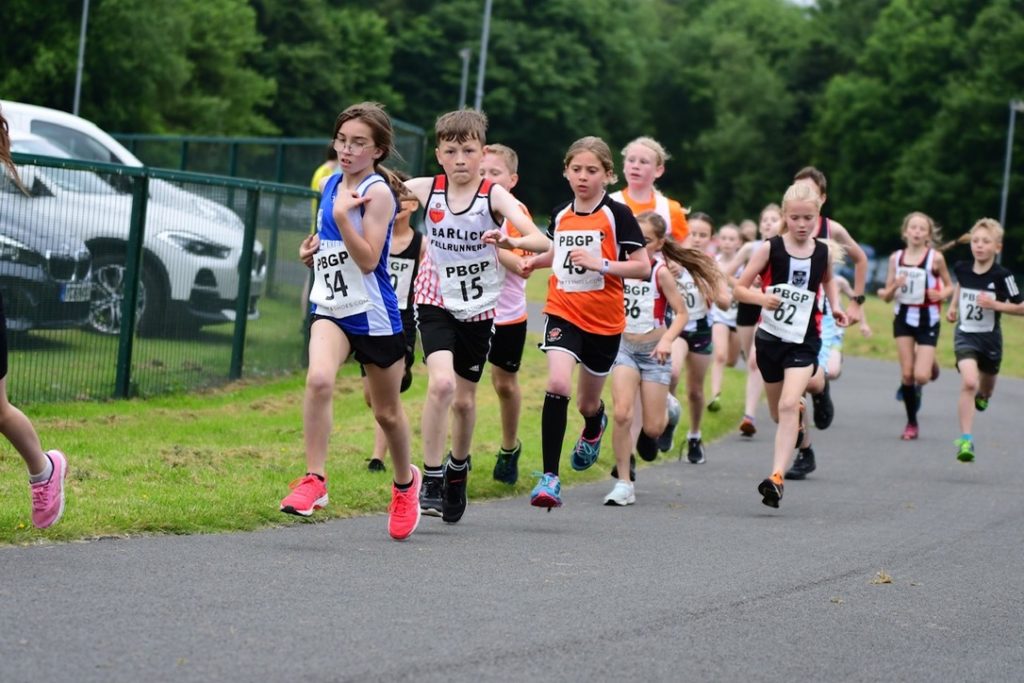 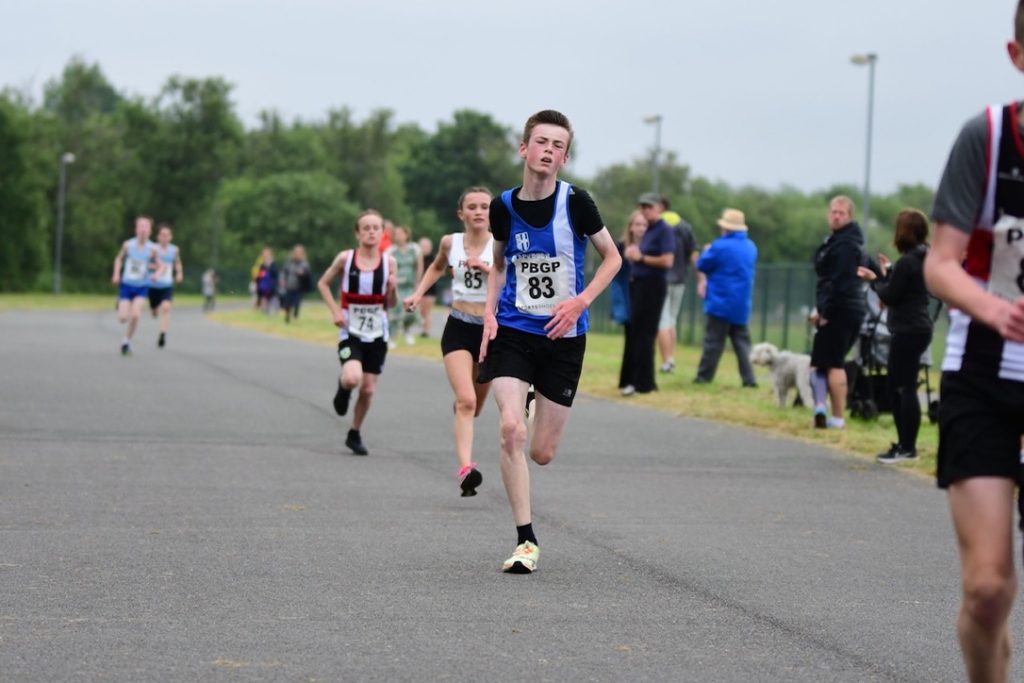 55 runners in thne ‘B’ 5k Race won by Rossendale’s Michael Corbishley in 17.05. Ryan Bradshaw clocked 17.28 in 4th spot and a delighted Ellen Sagar-Hesketh who had started the race with a best 5k time of 19.33 got huge rewards for all her training as she knocked over half a minute off that time to set a new PB of 18.59 in 24th place overall and 4th woman on the night. In the A Race won by Halifax athlete Thomas Hodgson in 14.58 the Harriers had five athletes competing. Jacob Watson led them home running 15.39 in 4th spot overall with Marc Hartley next across the finishing line for the Club in 11th place (16.06). V50 Nick Gaskell has been really consistent over the 5k distance this year running times of 16.18, 16.14, 16.12, 16.30 and at the Podium 16.33 in 19th spot. John Horrocks who can be seen regularly on the Fells was the next Blackburn Harrier home in 26th place running 17.04. The only Junior Female in the race was U17 Isabel Holt who has just recently secured selection for English Schools and she ran well to clock 17.35 in 34th spot. 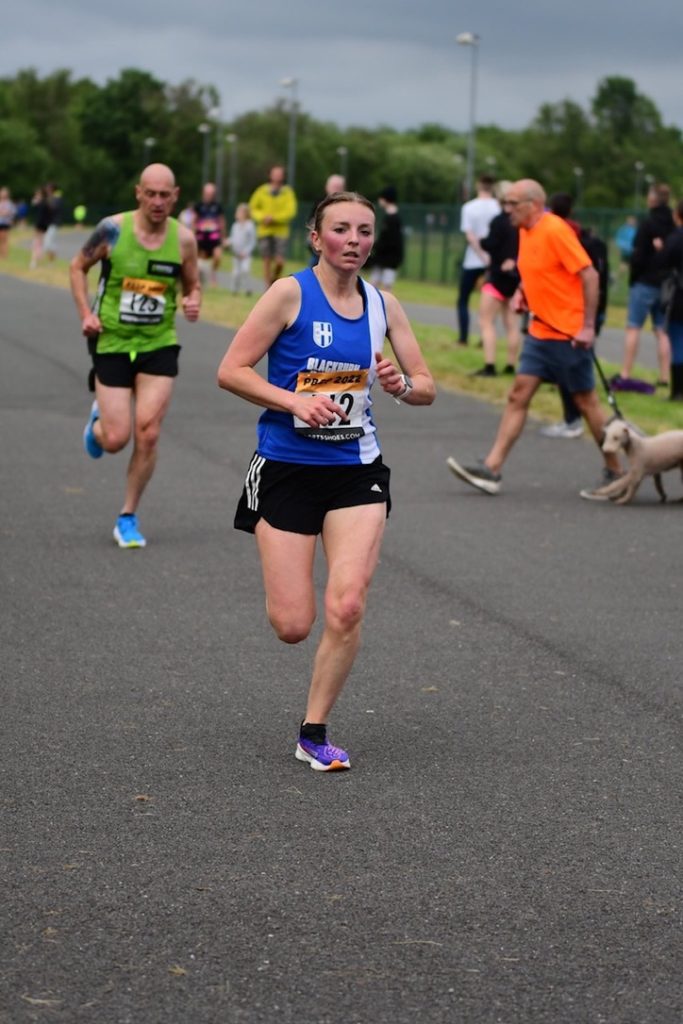 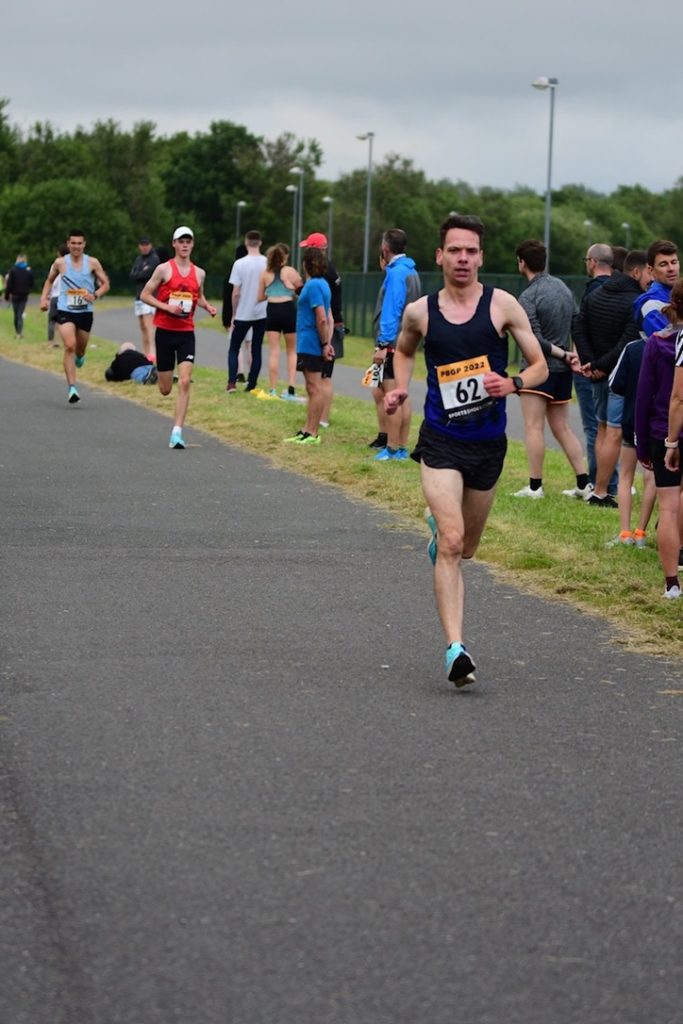 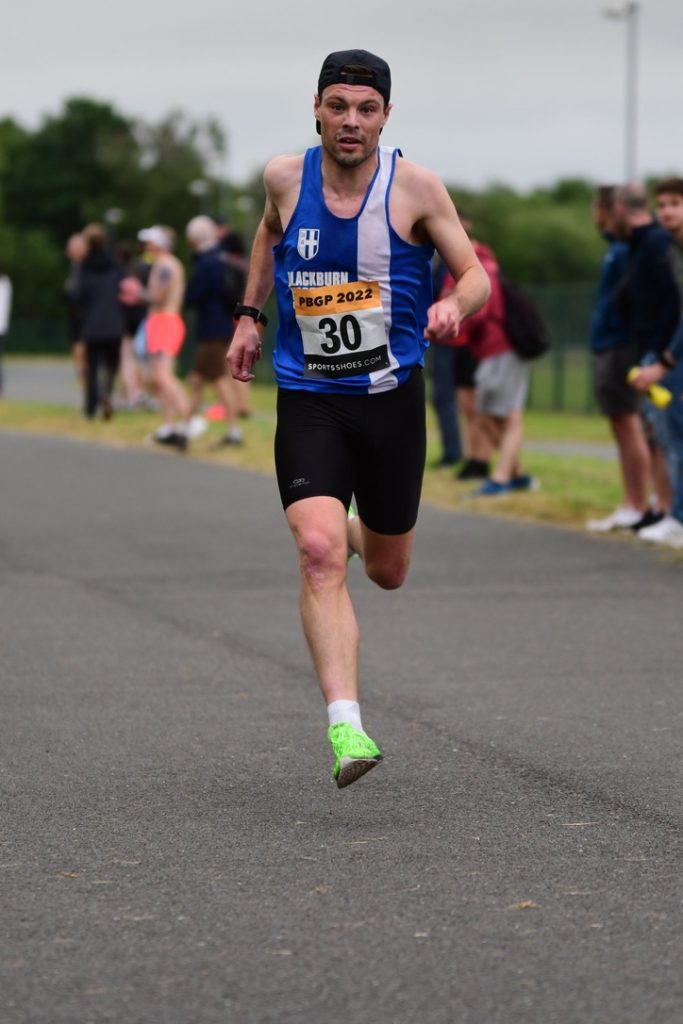 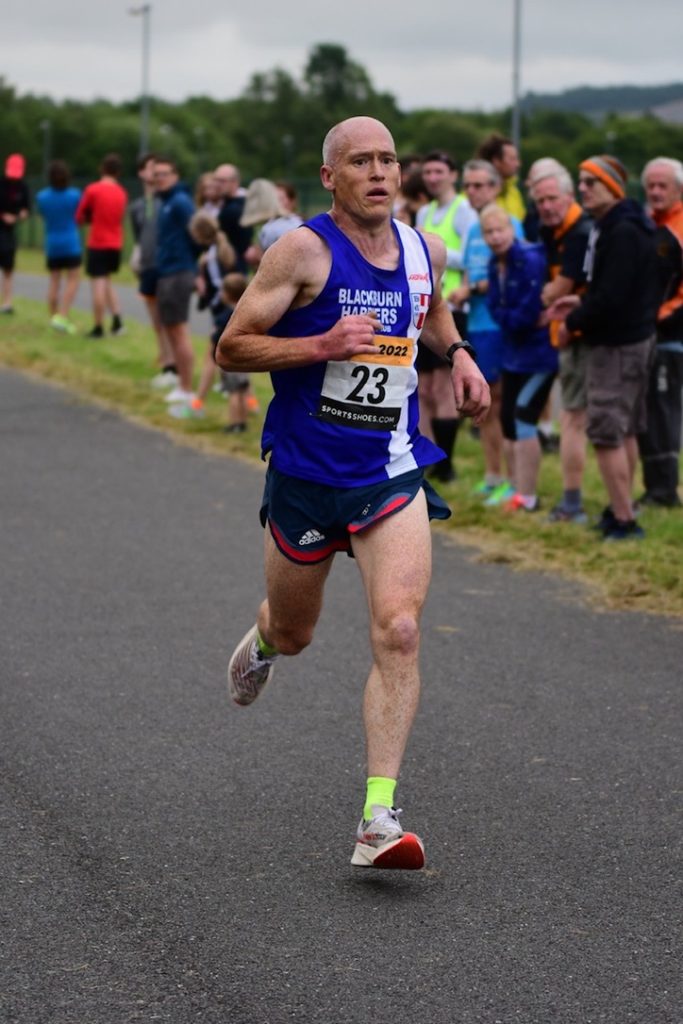 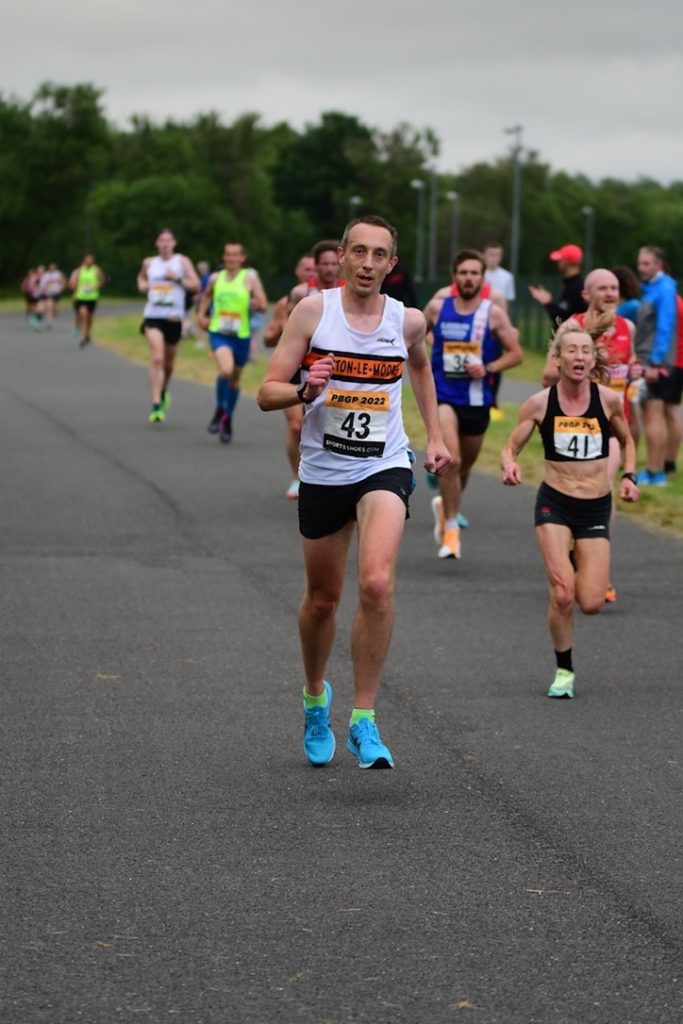 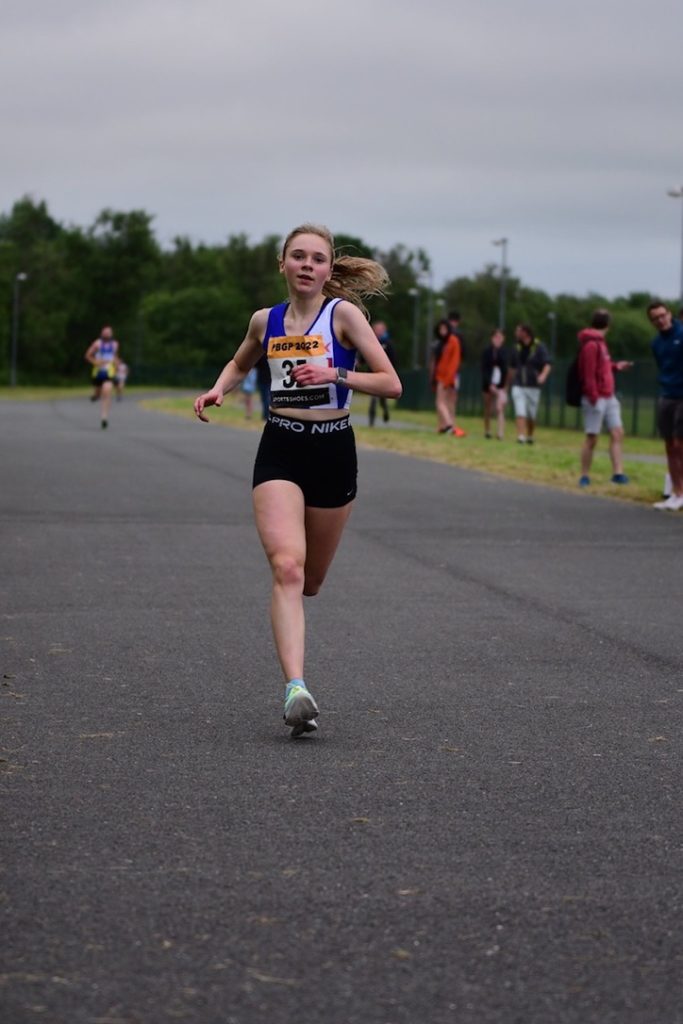 Well done to Jan Buckingham (V55) who took on the Sprint Triathlon as part of the Leeds International Triathlon on Sunday June 11th and finished in 103rd place in the F55-59 age category with a combined time for the swim, bike ride and run of 1hr 49.07. Her time on the day meant that she came 2nd in the age category behind the winner who clocked 1hr 46.55. 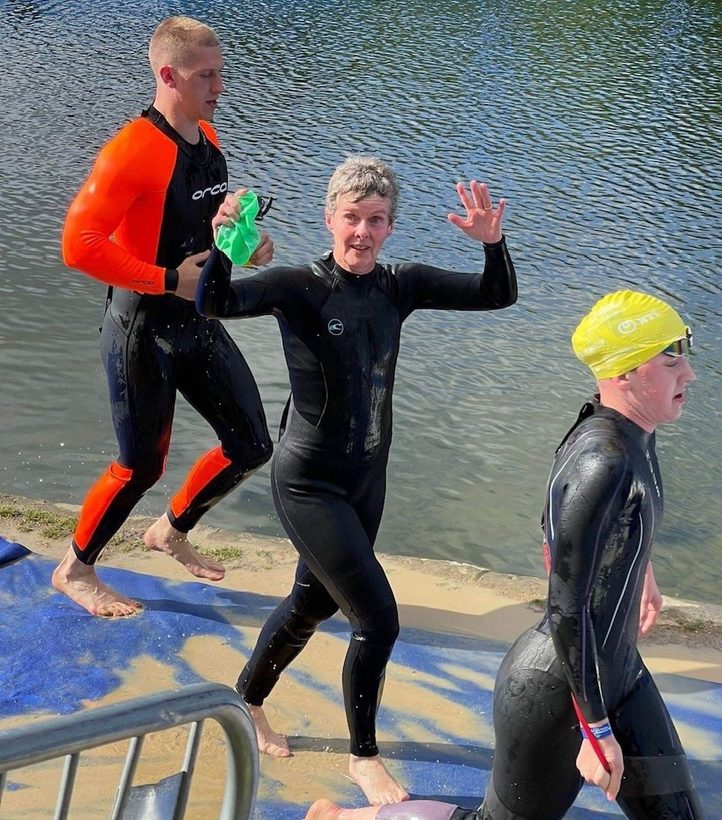 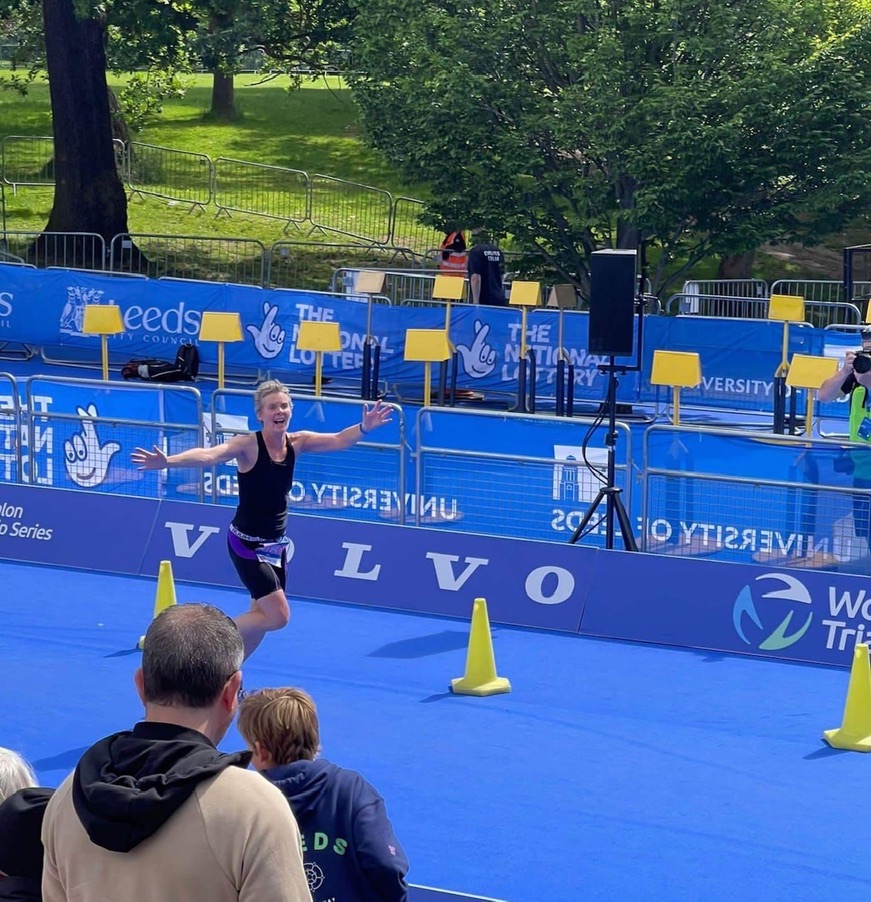 Still on Triathlons, Mark Taylor took on the Full Lakesman on Sunday June 19th – an event that covers 3.8km open water swimming in Derwent Water Lake, 112 mile on the bike followed by a Marathon 26.2 miles. Mark’s swim time was 1hr 13mins, his bike ride of 112 mile took 5hrs 54mins in “horrible windy” conditions and finished off running the Marathon in a time of 3hrs 26mins for a combined total finishing time of 10hrs 45 mins which was a new PB by 13 min, bringing him home in 34th position

Magnus & Aggie Taylor weren’t being left out of the action and both competed the Lakesmini races which was just running without the swimming and cycling.  The competiton was held at Keswick rugby club. Magnus was 4th out of about 25 in the 8-9 year olds 800m race. Aggie 3rd in the 11-15 year olds 1km race, just pipped by two older lads. 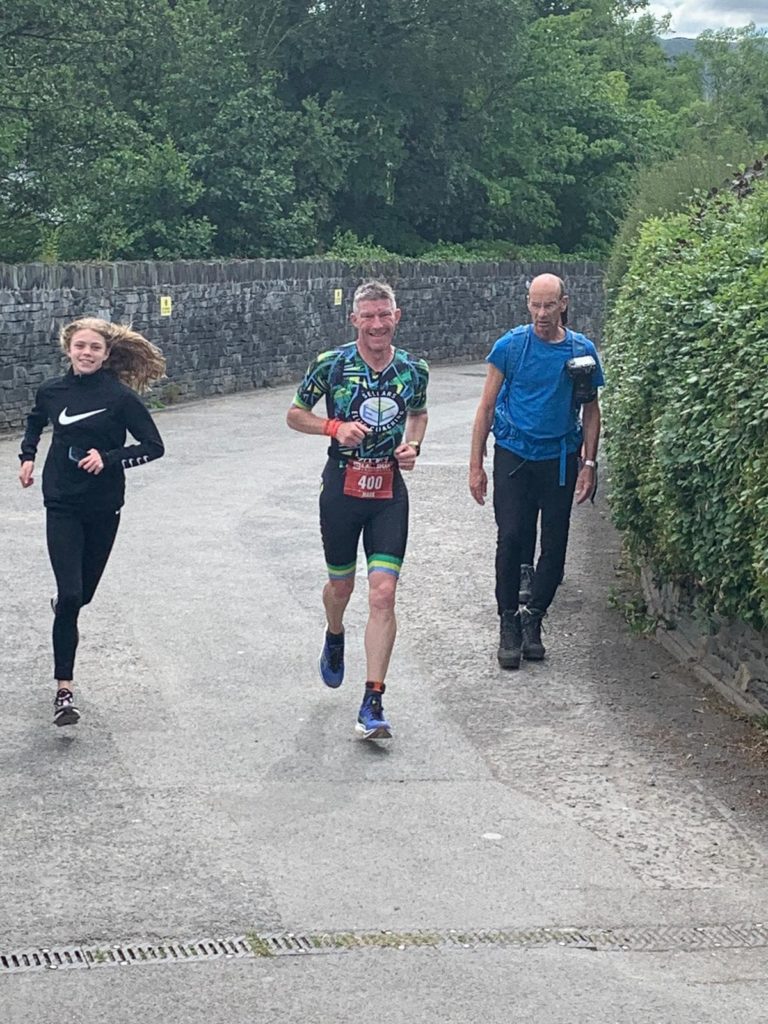 Mark Taylor (400) with Aggie supporting alongside 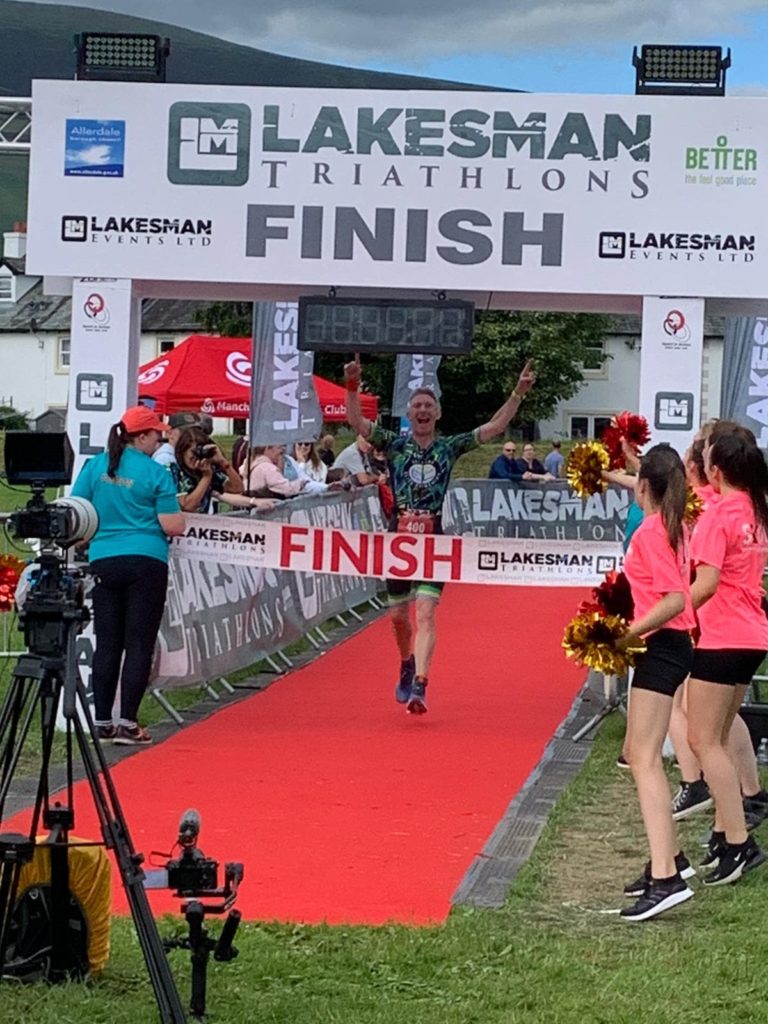 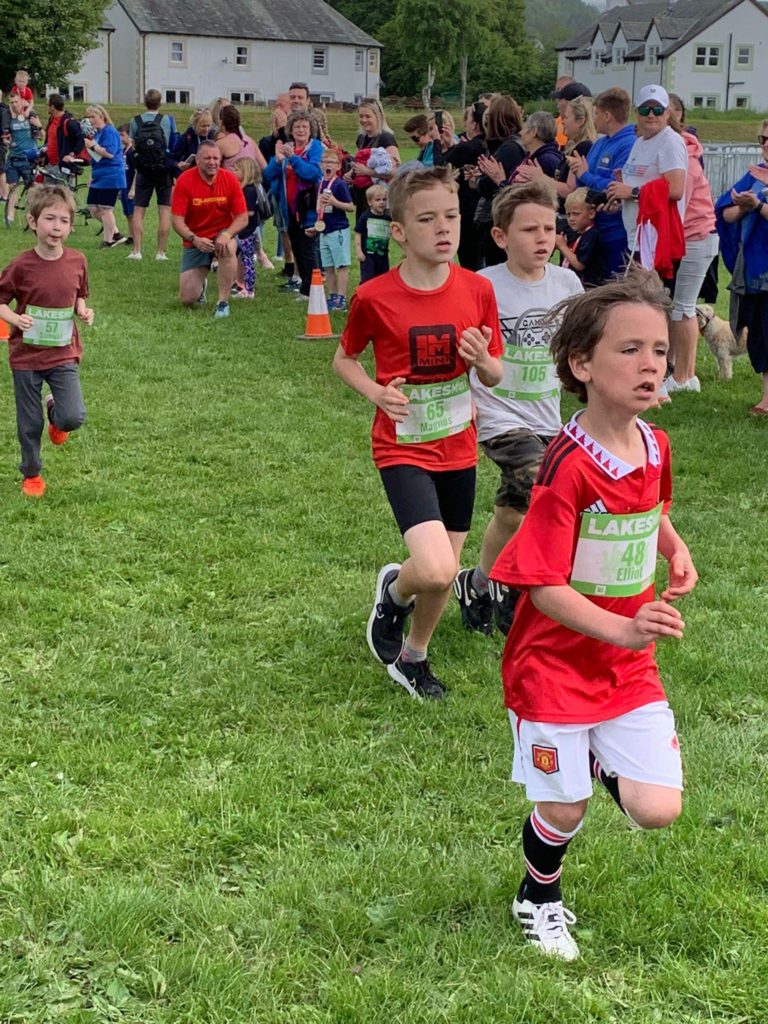 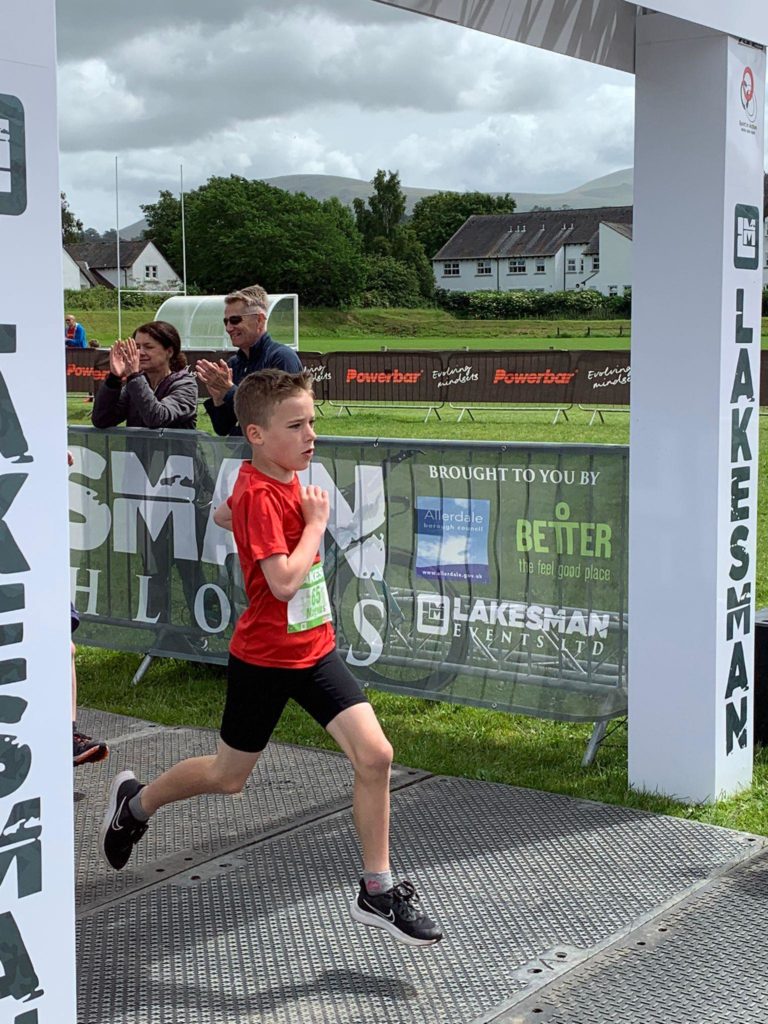 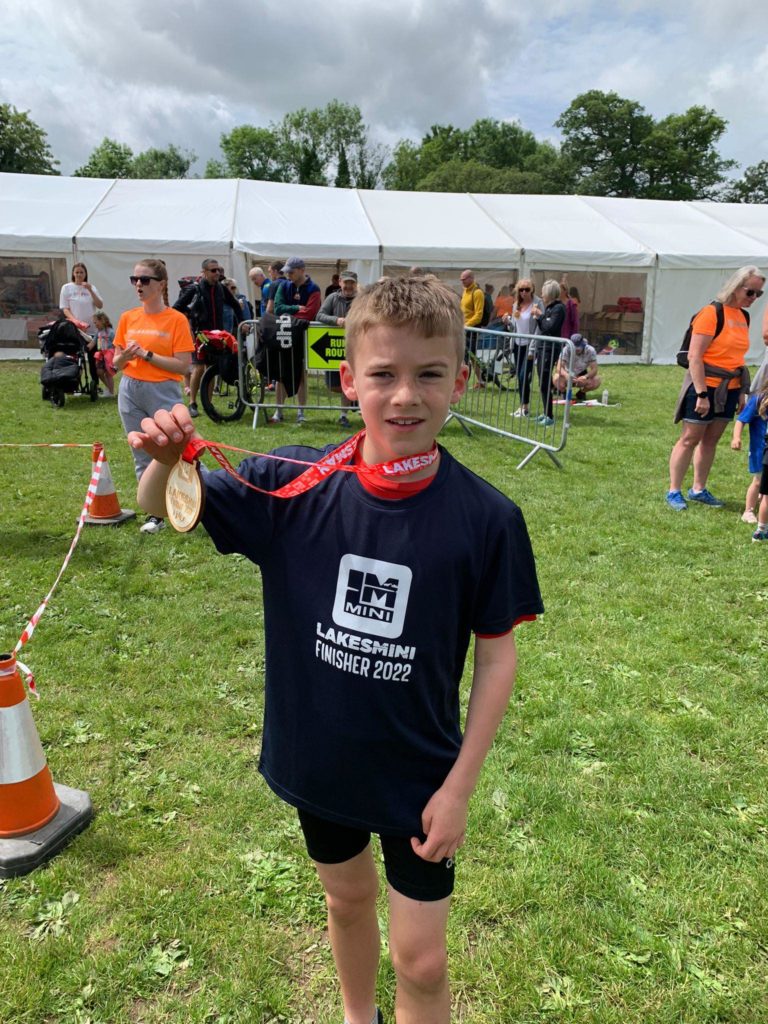 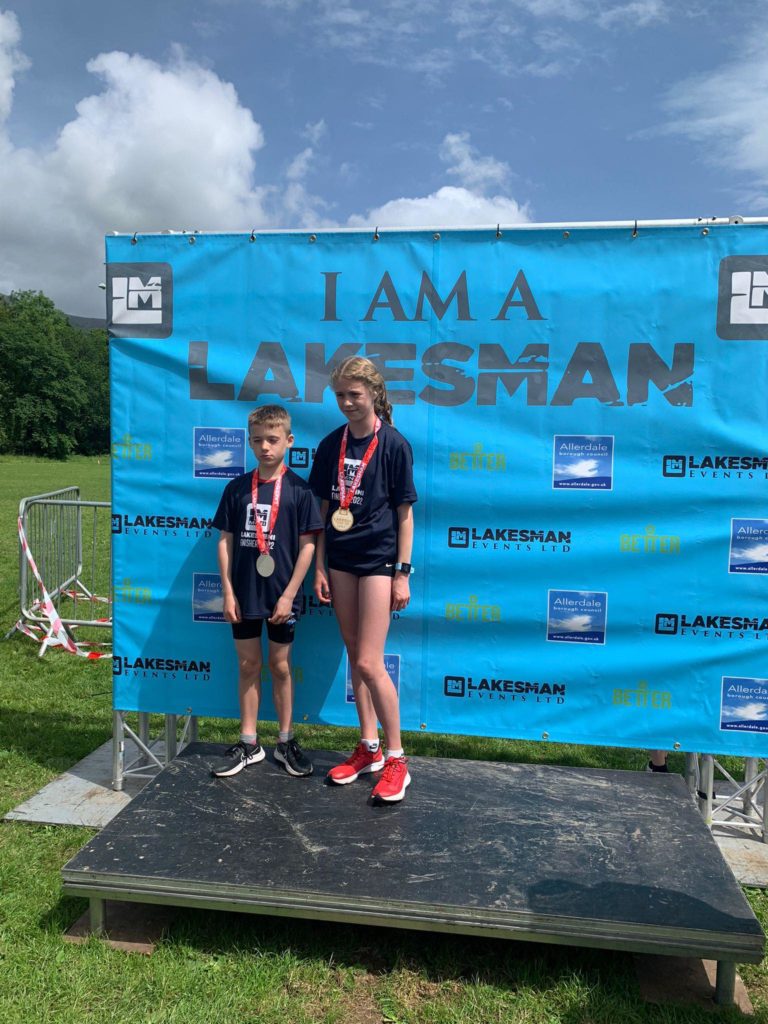 Magnus and Aggie sharing the platform