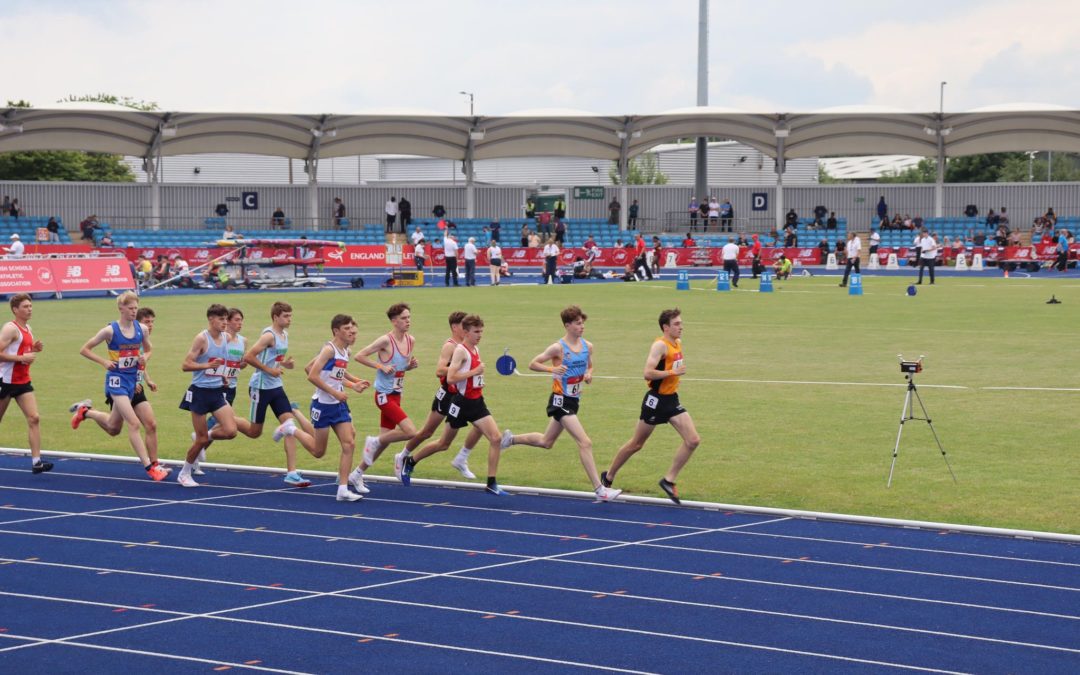 The English Schools Track & Field Athletics Championships is the aim for all young athletes as they look towards developing their athletic careers through to Senior competition. As with all other sports, this years championships – the first in two years – has been held in different circumstances than usual and of course, the build up to it by young athletes has been compromised by missed training, either through isolating procedures under Covid-19 restrictions, or because they have actually had Covid themselves. So congratulations to all those athletes who made it to Sportcity this weekend.

This is precisely what happened to several athletes at Blackburn Harriers, including Hammer Thrower Matthew Heywood. After throwing personal bests of 50.39m on June 9th and then 51.04m on June 13th, his progress was halted, having to isolate because of contact, which meant no training leading up to the Championships. Nevertheless, Matthew was positive as he explained to the Club after his competition – throwing 44.68m – commenting “Having two weeks in isolation prior to competing, along with on/off training due to covid, I feel I was not fully prepared, so struggled when throwing which was reflected in my result. Hopefully now training can resume properly I can get back on track to improve for next year & hopefully win”

Matt Ramsden was another one of those athletes who has suffered from Covid and isolation leading up to the Championships, but was still delighted to be selected as he went into the Race with a personal best of 8.33.55 ran at Trafford in the middle of May. On the day Matt ran 8.38.70, five seconds outside his personal best in 8th place, reflecting on the day afterwards “It was a proud moment getting selected for the 3000m at English schools and I am happy with my performance considering recently recovering from Covid. It is such a shame this is my last year but it is an experience I will treasure“. 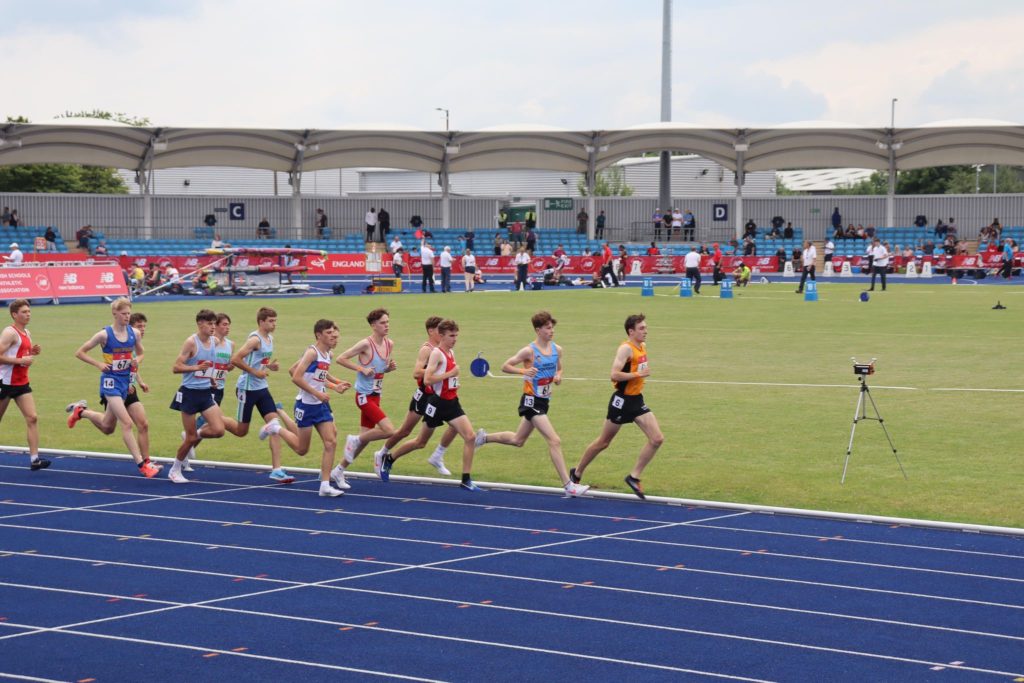 Matt Ramsden No 7 Inside Lane

U15 High Jumper Matthew Smith was at his first English Schools and as part of his build up to these Championships, he had placed 6th in the ESAA North West Schools Combined Event Championships on June 26th which is where he wants to concentrate. With a personal best of 1.70m Matthew was selected for the Lancashire Schools Team at Sportcity finishing 7th, clearing 1.64m. Ranked 11th Nationally, finishing 7th here represents a very solid performance by him which he reflected on when speaking to the Harriers later “I enjoyed the experience of competing against the best high jumpers in the country in such a fantastic stadium. I was a bit disappointed not to get a PB but I’ve got another year in this age group so hopefully will be back again next year.” 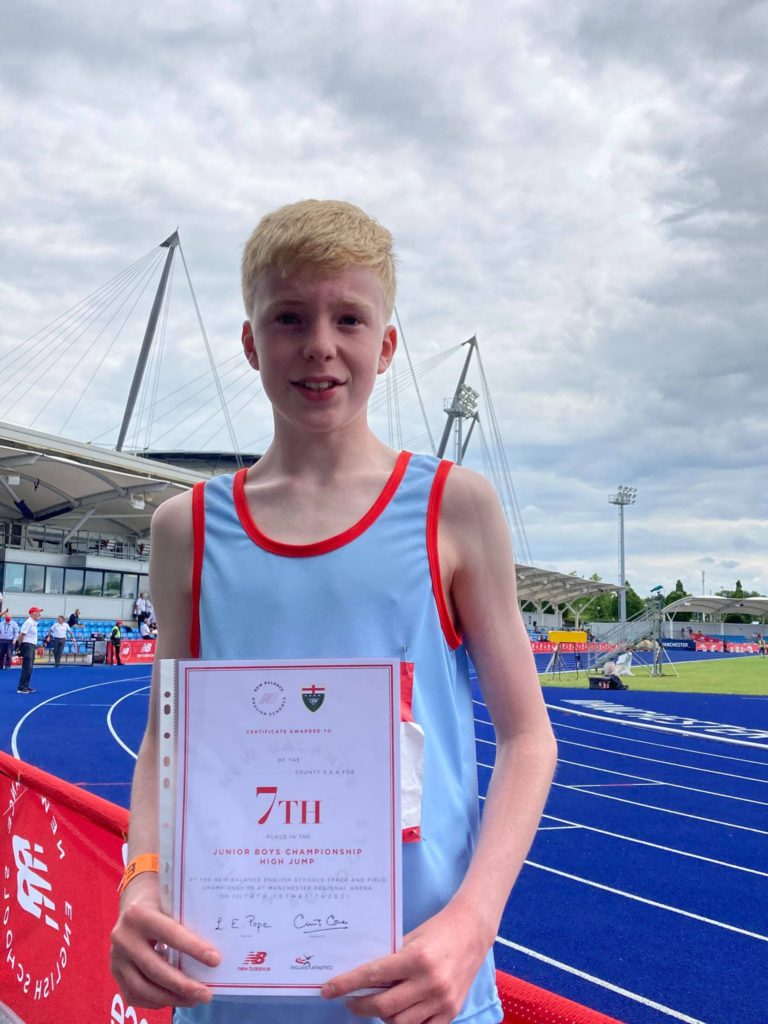 Abigail Stratton was at her first English Schools Championships and went in the 1500m alongside two other Lancashire athletes and in a field of 13 in total. Abiagail finished with a time of 4.41.40 and first of the three Lancashire athletes. Speaking about her first experience at English Schools, she told us that she “Really enjoyed the whole English schools experience, mega fast race, was hoping for a couple of places higher, hoping to improve on this next year”. 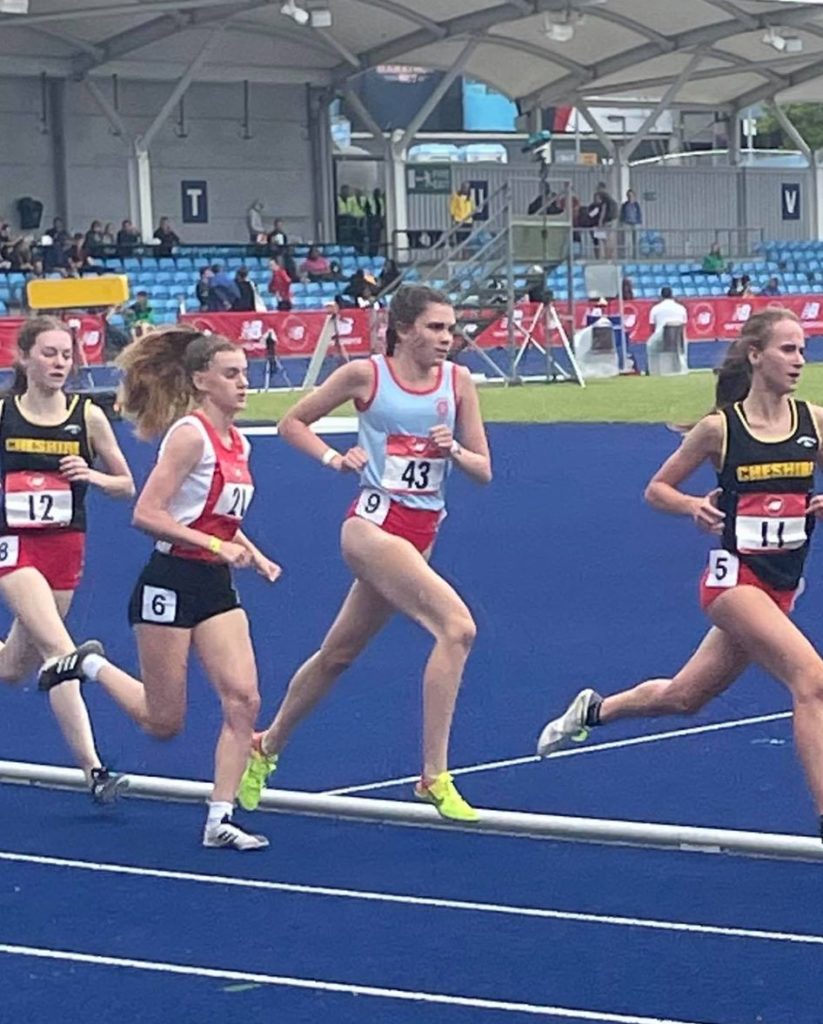 May 29th saw Isabel Holt competing at the West Nab Fell Race and having a great run, resulting in her being selected to represent Lancashire in the British Junior Inter-Counties Fell Championships on June 13th as part of the Up The Nab Fell race. Another very good run saw Isabel winning the Individual Bronze Medal. Fast forward to July 10th and Isabel was competing again at the Tour of Bradwell Junior Fell Race which served as a Trial for England selection. Isabel put in her third very good run on the trot as she placed 2nd female in her age group (U17’s). Speaking to the Club after the race Isabel told us that “It was the longest and steepest race I have ever done and racing with the U19’s & U20’s. I am really pleased with my position despite being stung on my final hill descent by a wasp!“

England selection will be announced next week which will be for the Junior Home International, Newcastle Co.Down, Northern Ireland on September 11th. 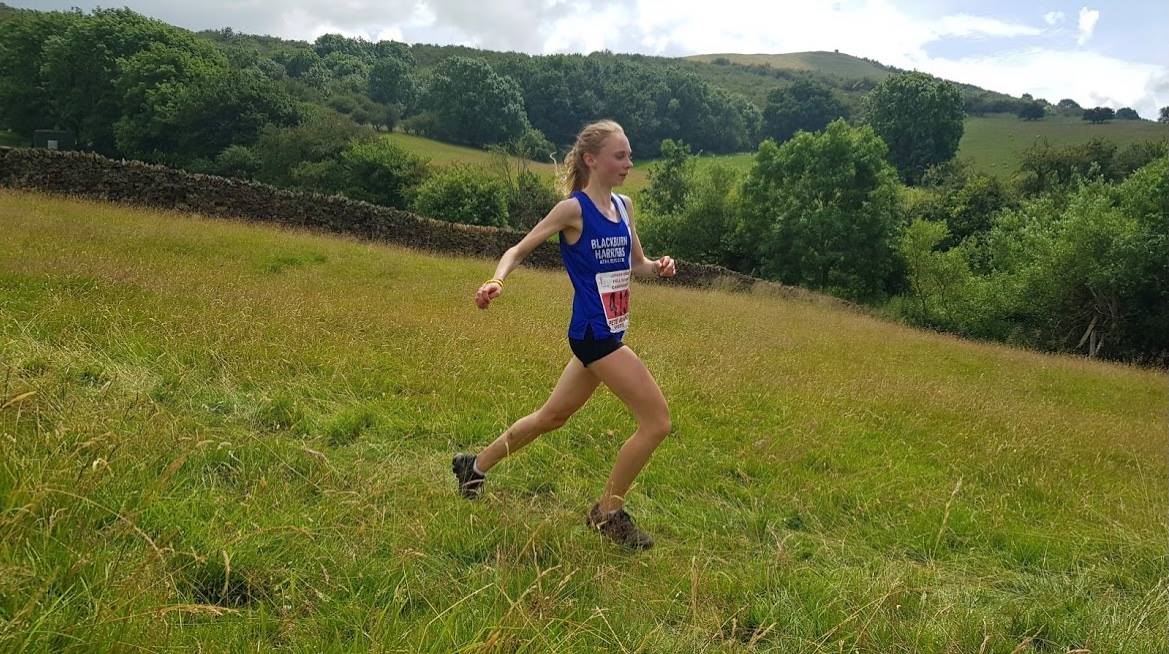 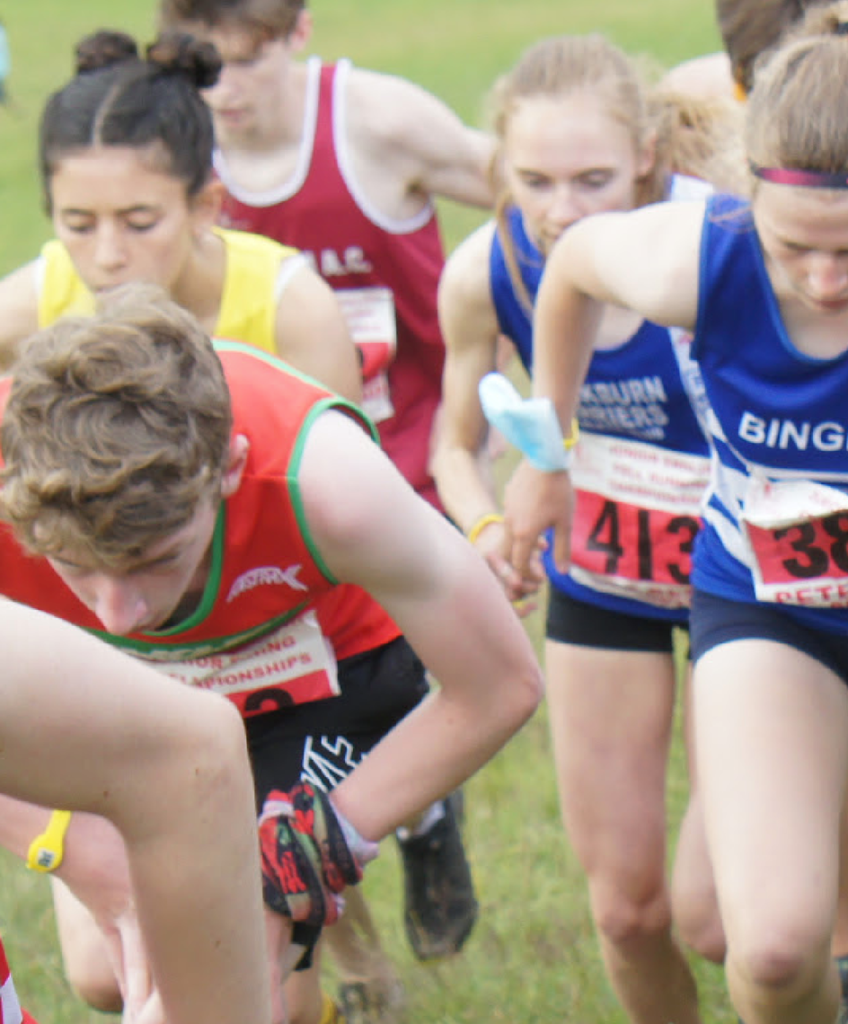 Described by the organisers thus – ‘The Wharfedale Trail Half Marathon is a 13.2 mile trail race flagged throughout the entire course. It affords participants and their families the opportunity to enjoy a great day out in some of Wharfedale’s finest scenery with over 2,000 feet of ascents the route follows well established footpaths, including the Dalesway and Mastiles Lane and for those with time to take in the fabulous scenery the views from Scott Gate, Mastiles and Boss Moor are quite breathtaking’.

Blackburn Harrier Jonathan Bridge (V50) ran the race coming across the finishing line in 37th place and 5th V50 in a time of 1hr 59.55, commenting afterwards to the Club that there were “slow signs of improvement at Wharfedale Trail Half – 37th out of 220 and 5th V50 – 13.5 miles of fantastic Yorkshire hills and nice to get the Blackburn colours in amongst the Pudsey, wharfy and Skipton vests. Always guaranteed kind words of encouragement when wearing a Lancastrian top in these parts”. Son Joe Bridge had a very good run finishing in the top five with his clocking of 1hr 38.05 in 4th place. 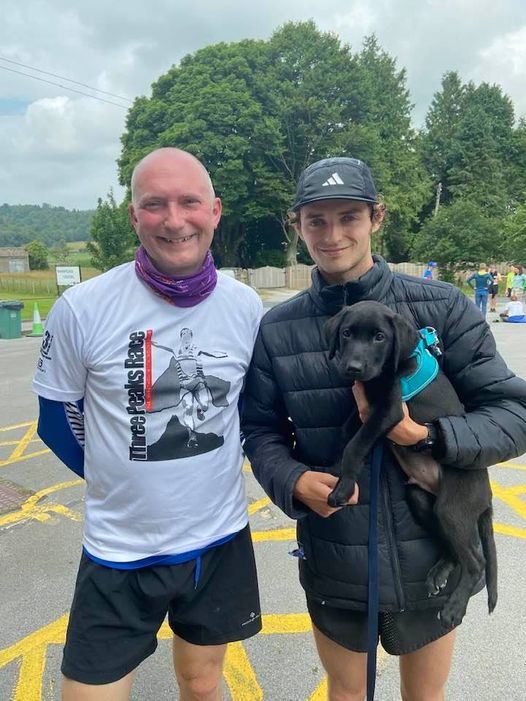 This Race is 1 mile long and climbs 485 ft – short and steep – described by the organisers as ‘starting by the bridge at the bottom of Brunthwaite Lane this is an uphill road race, not for the faint hearted’. This is a fun event which regularly attracts several hundred runners who take on the challenge of the tough uphill course.  The course winds its way up Brunthwaite Lane, with little respite, until finally turning the corner and the finish is in sight where the road meets Light Bank Lane.  Many of the competitors are local primary school children as the race is promoted in several of the schools.

One hundred and forty five runners of all ages had a go at it which culminated in a win for Wharfedale Harrier’s Matthew Athersmith in 7.42 with Keighley & Craven athlete Eric Beaumont in 2nd (7.56) and Pudsey & Bramley’s Declan Walker 3rd (8.00). Blackburn Harriers had just one runner entered – 12yr old Oliver Brown – and what a run he had, finishing 11th overall in a time of 8.24. 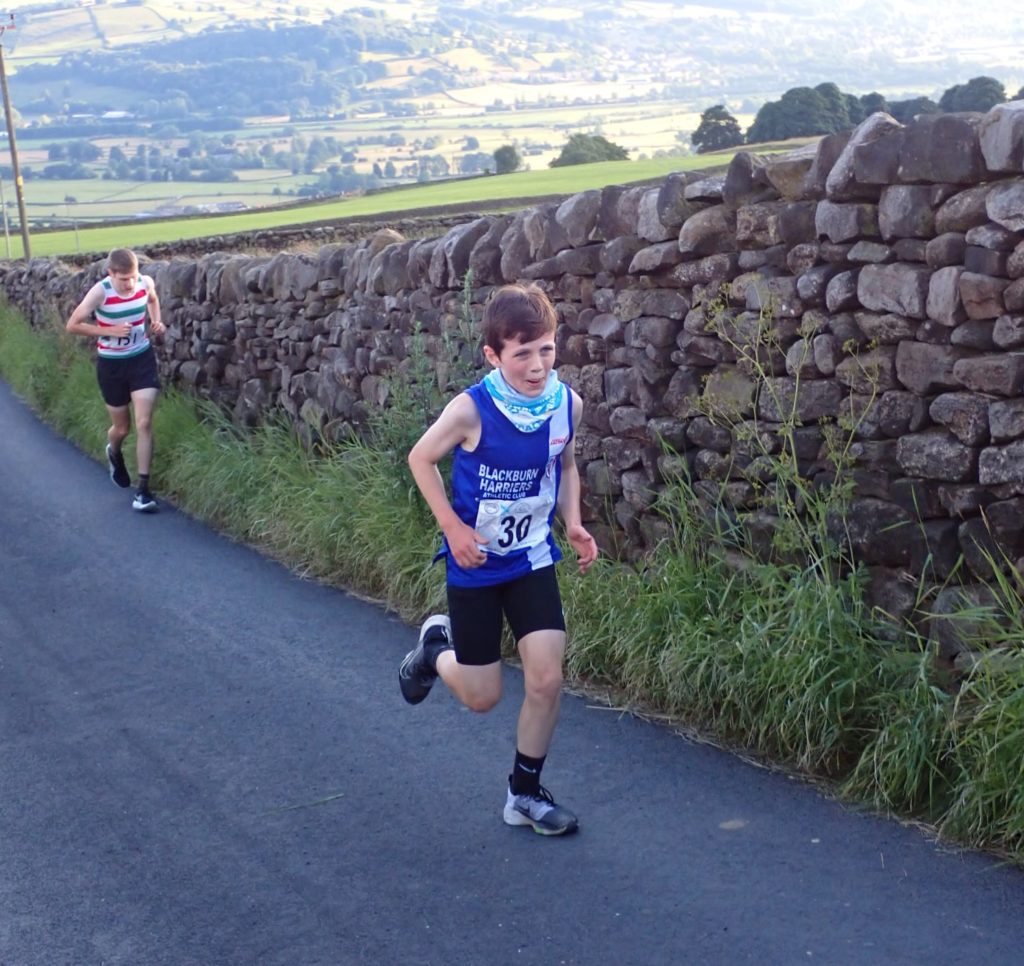 Mark Magee had a very good run in this Race heading a field of one hundred and forty three runners and taking the win in a time of 16.06 ahead of James Craig in 2nd (16.16) and Stephen Corbishley in 3rd (16.22). Following his race last week at Hendon Brook Ryan Bradshaw made it into the top ten with his time of 17.10 in 10th spot. Matthew Poole was having his first race over the 5k distance, coming home in 19th place with a time of 18.10. 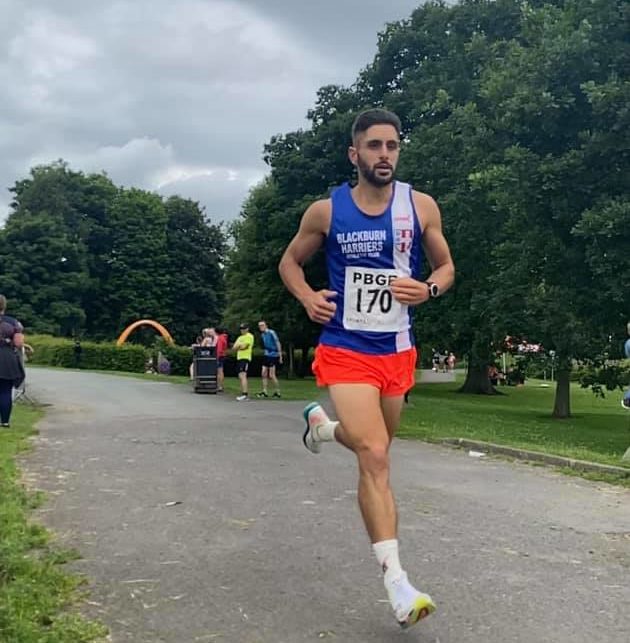 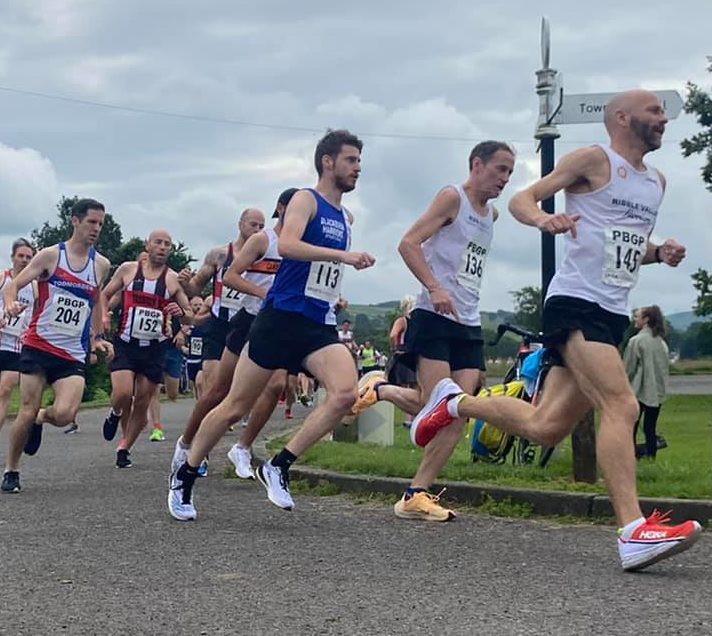 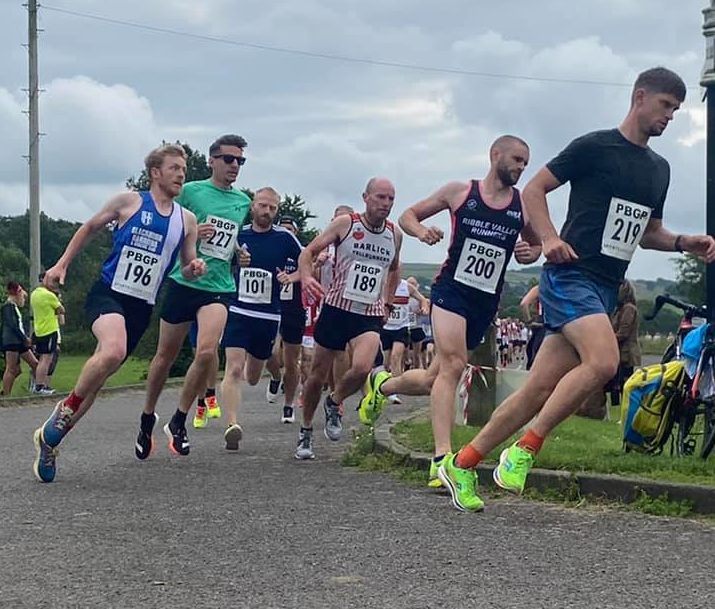 Thanks to David Belshaw for the individual photos 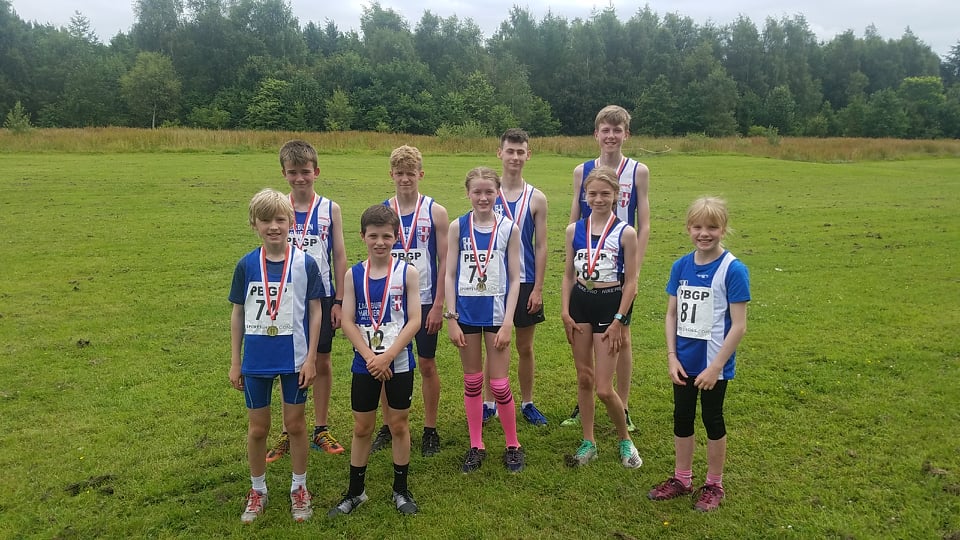 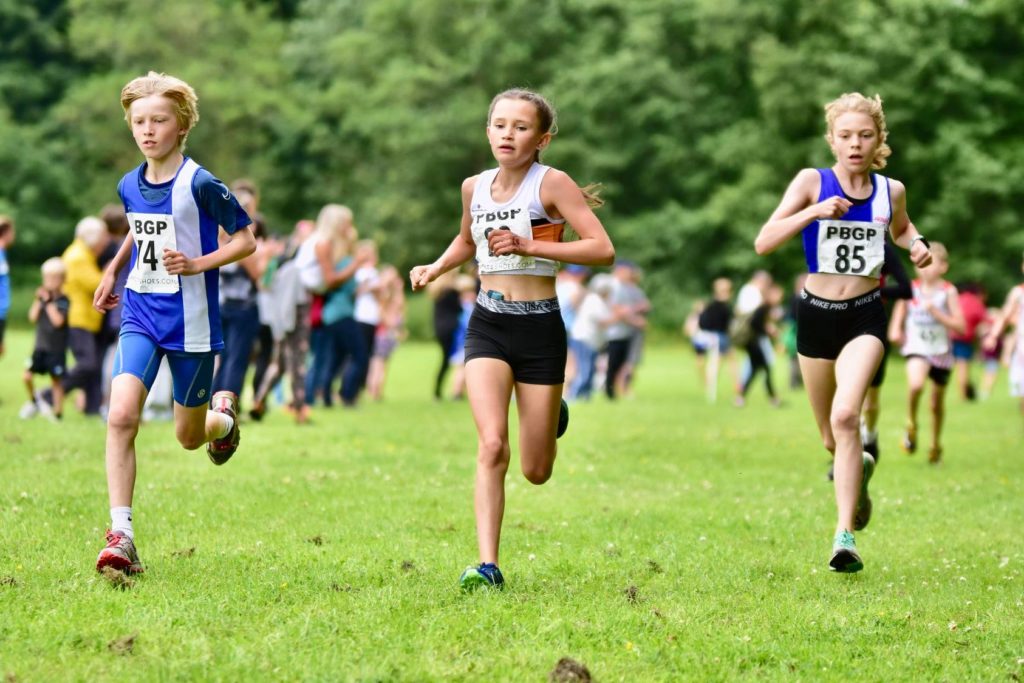 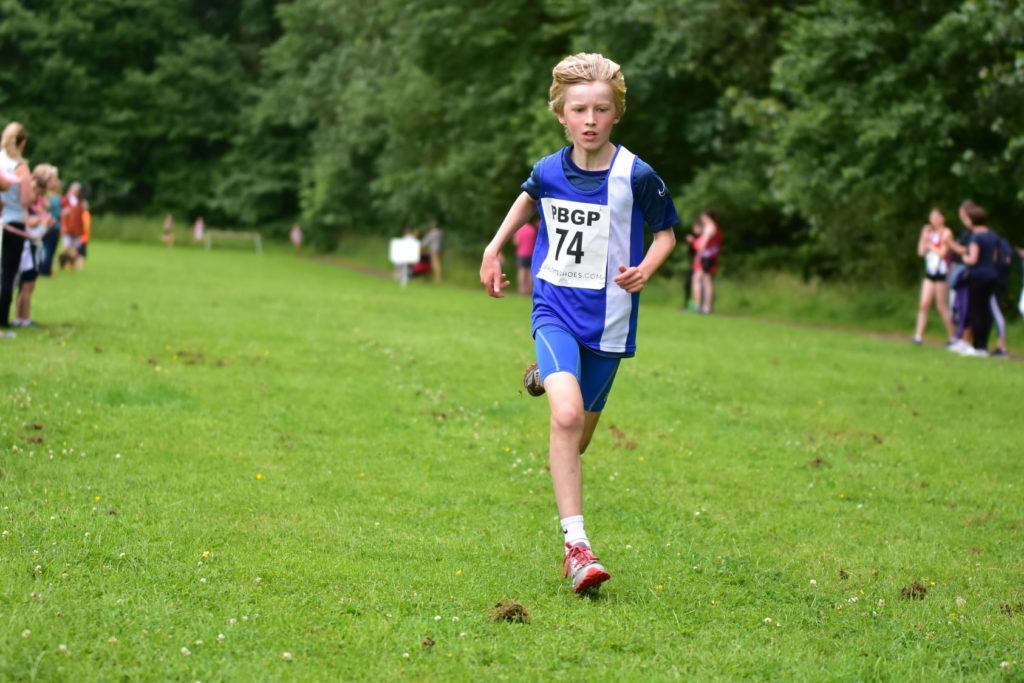 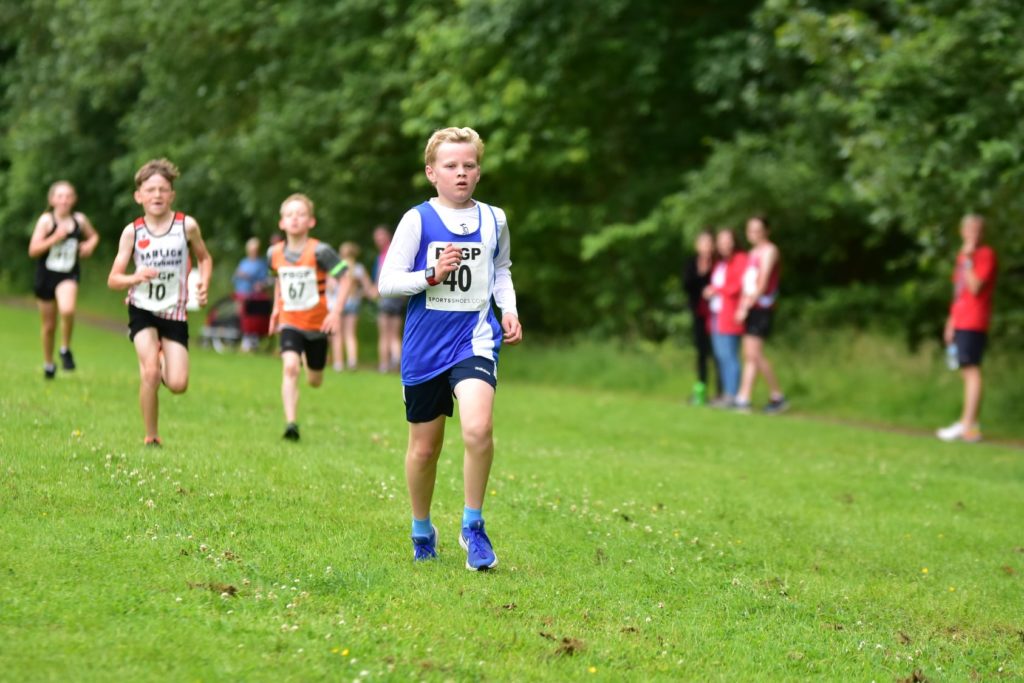 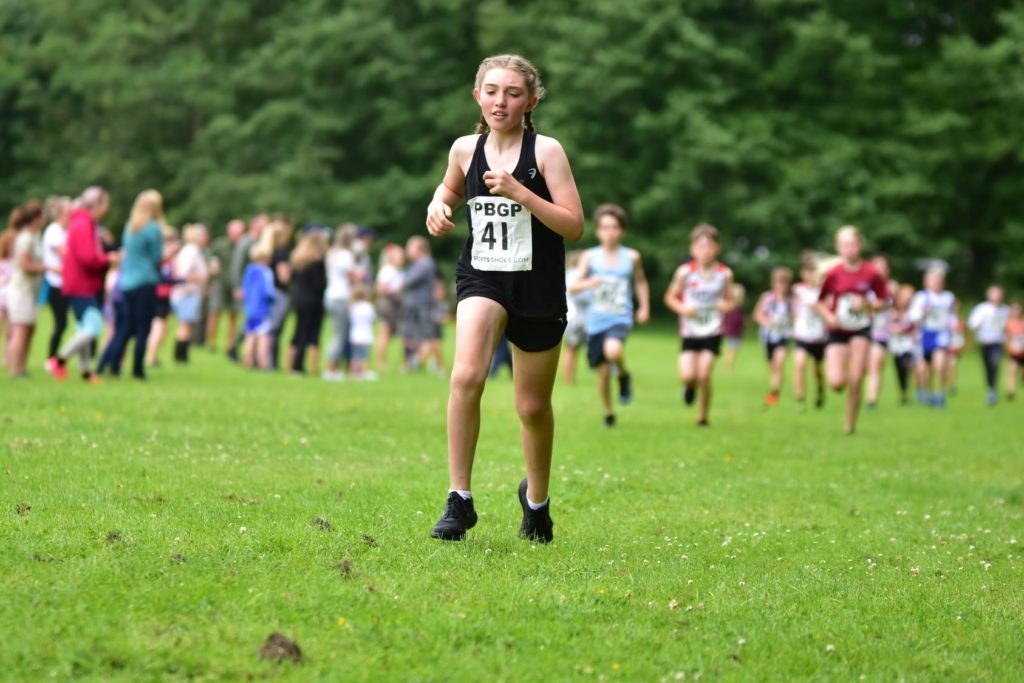 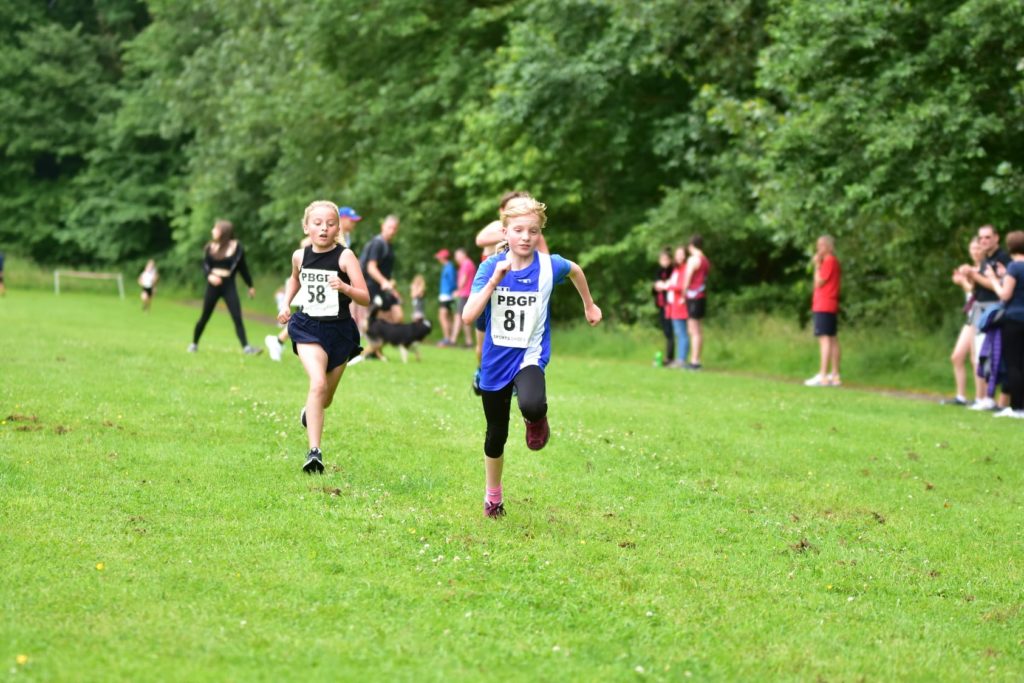 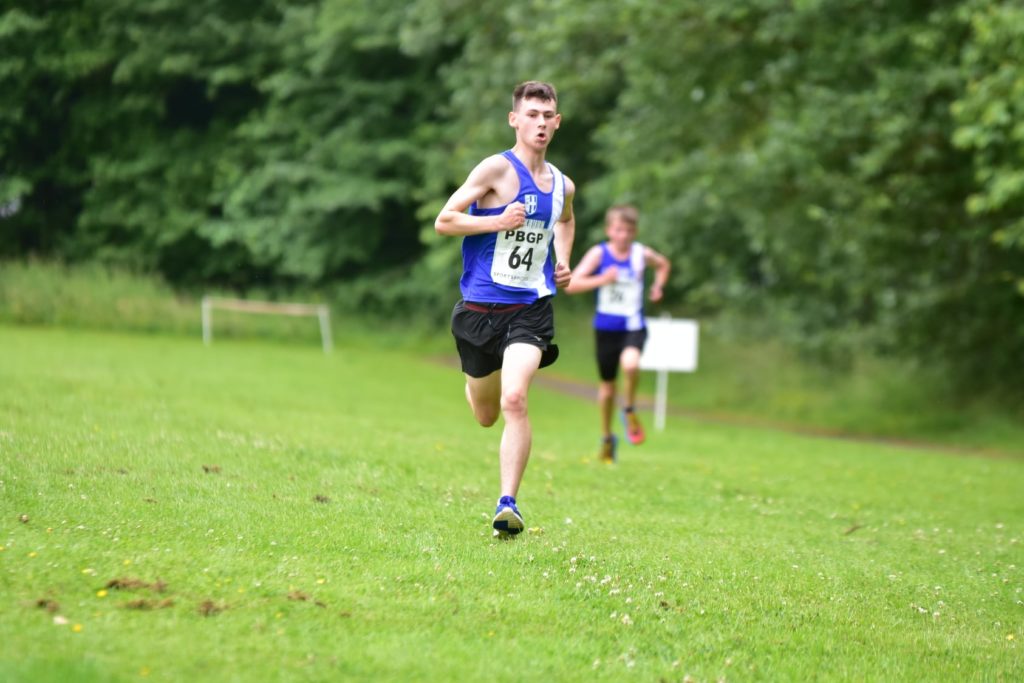 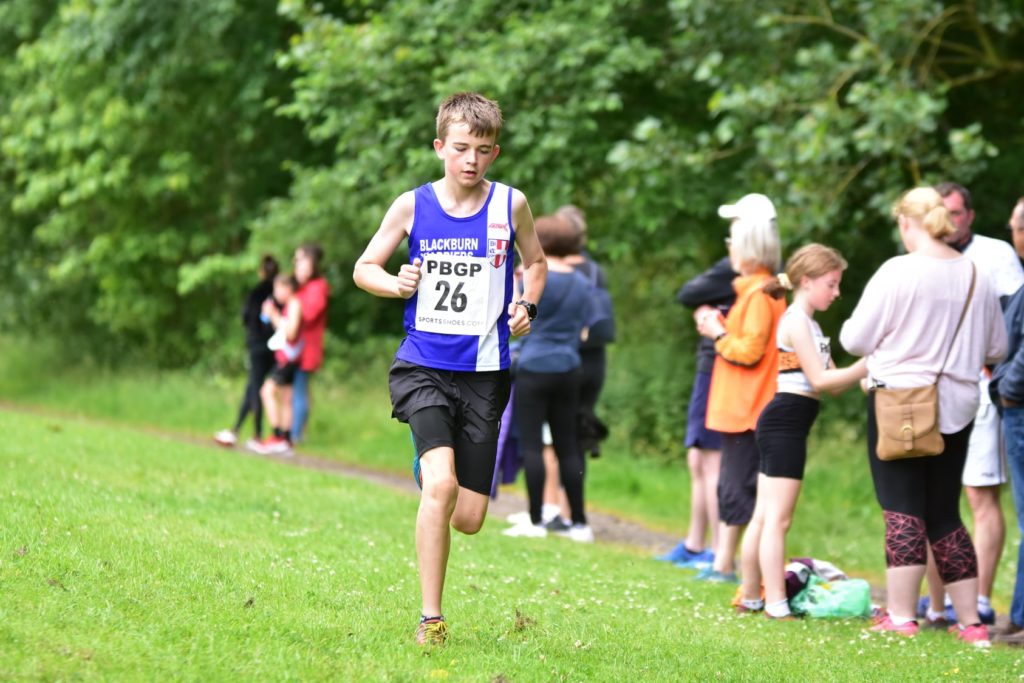 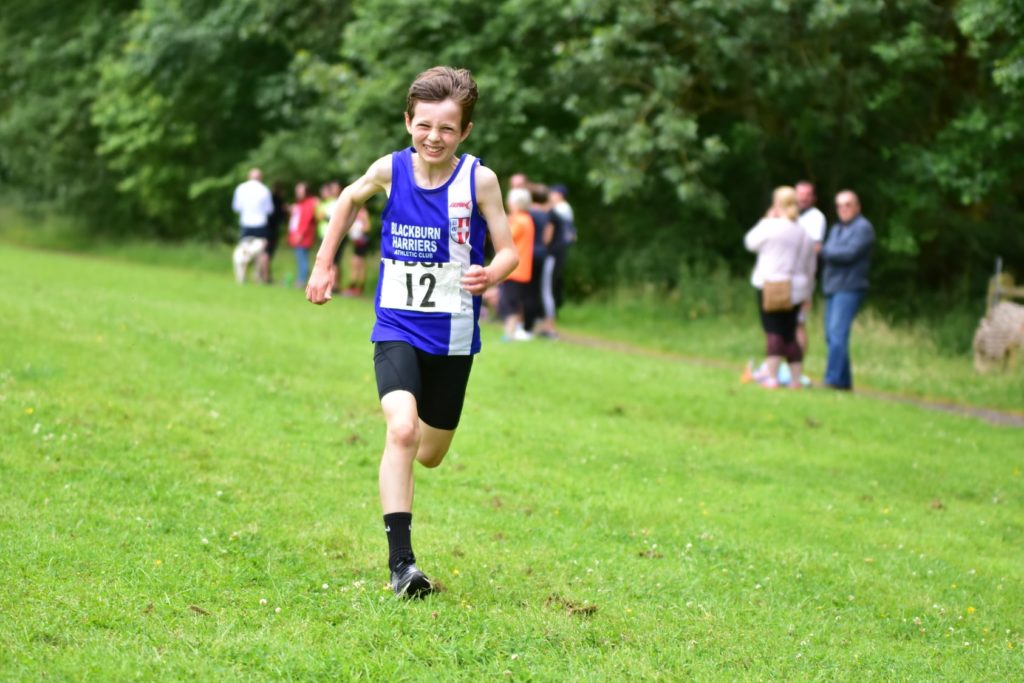 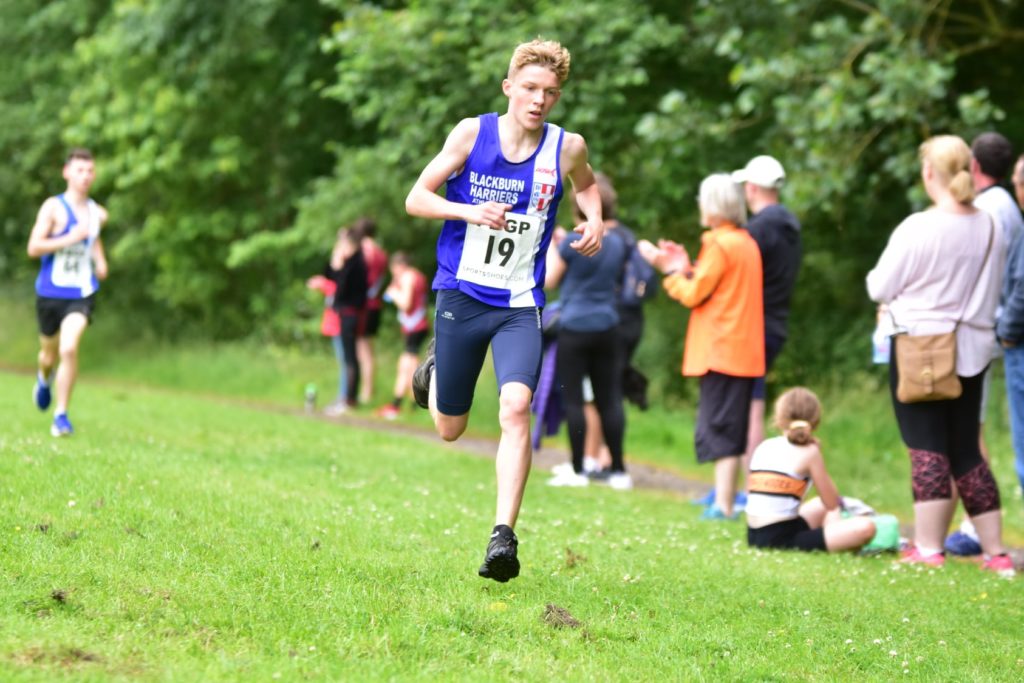 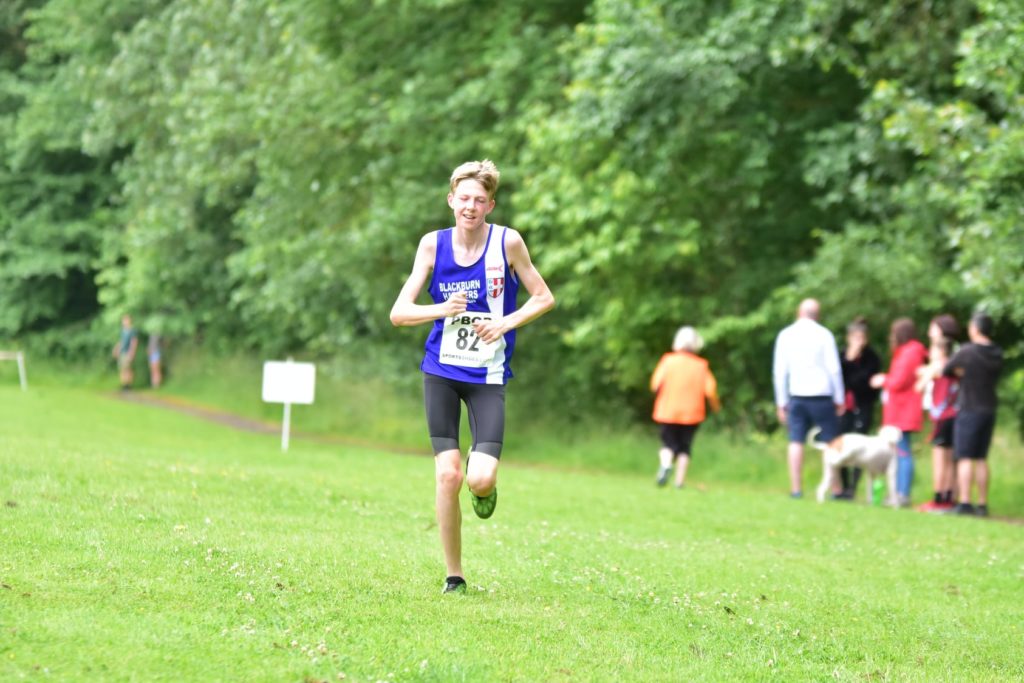 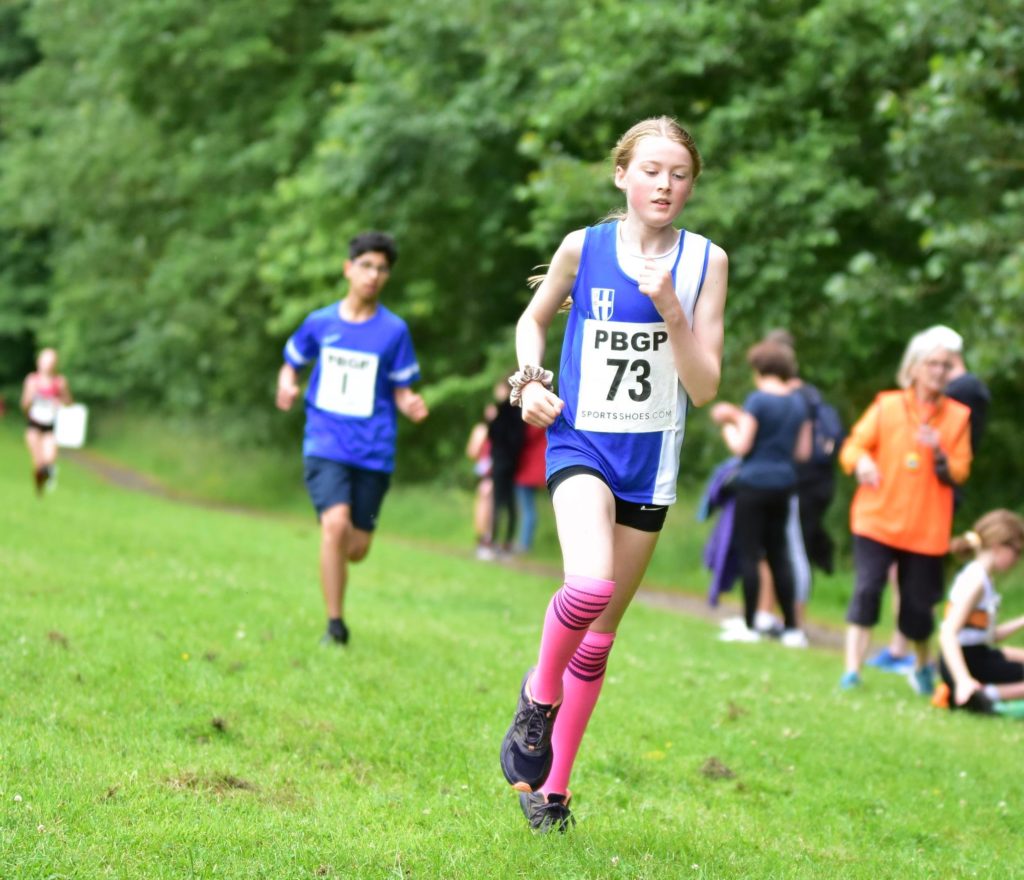