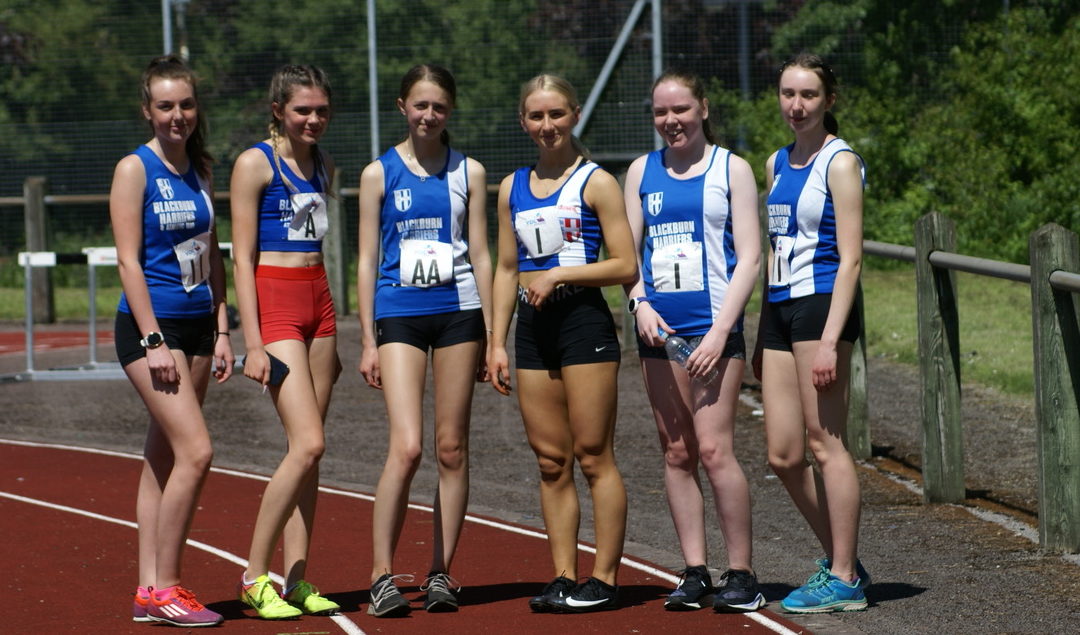 The day was covered in sunshine and very warm, ideal for some events, but certainly not for endurance. It was a strange day in many ways as the Timetable was reduced with limited events due to Covid Guidance and also absent were Steeplechase, Pole Vault, Hammer & Discus. However, thanks to Lancaster for being able to put the fixture on which was appreciated by all of the Clubs competing on the day. The outcome for the day was a good one for Blackburn Harriers as we won the Match by some 50 points. 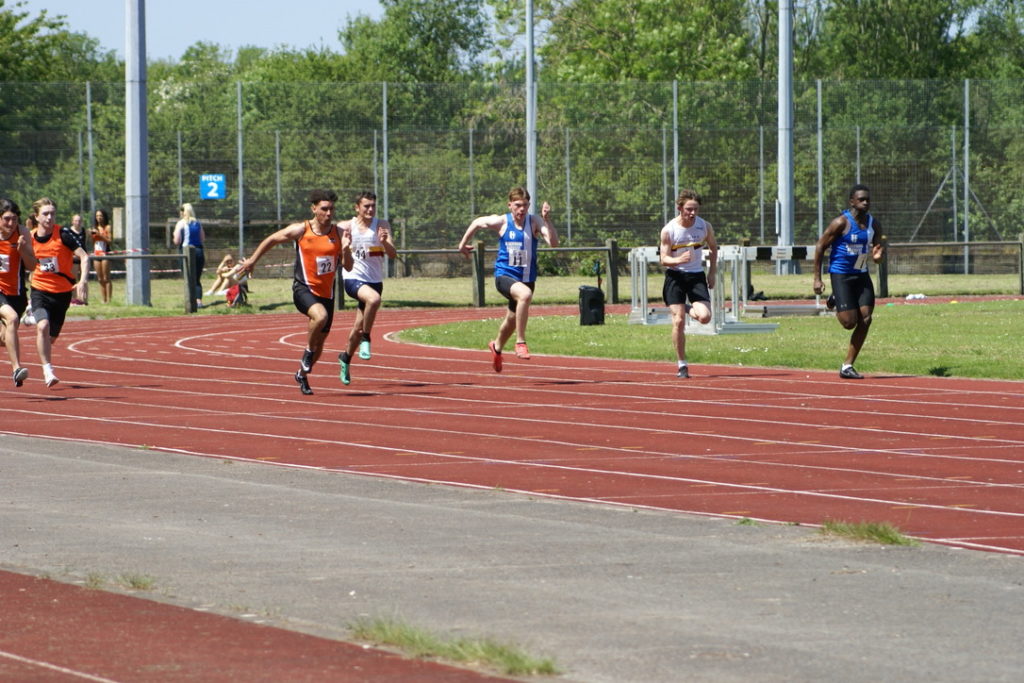 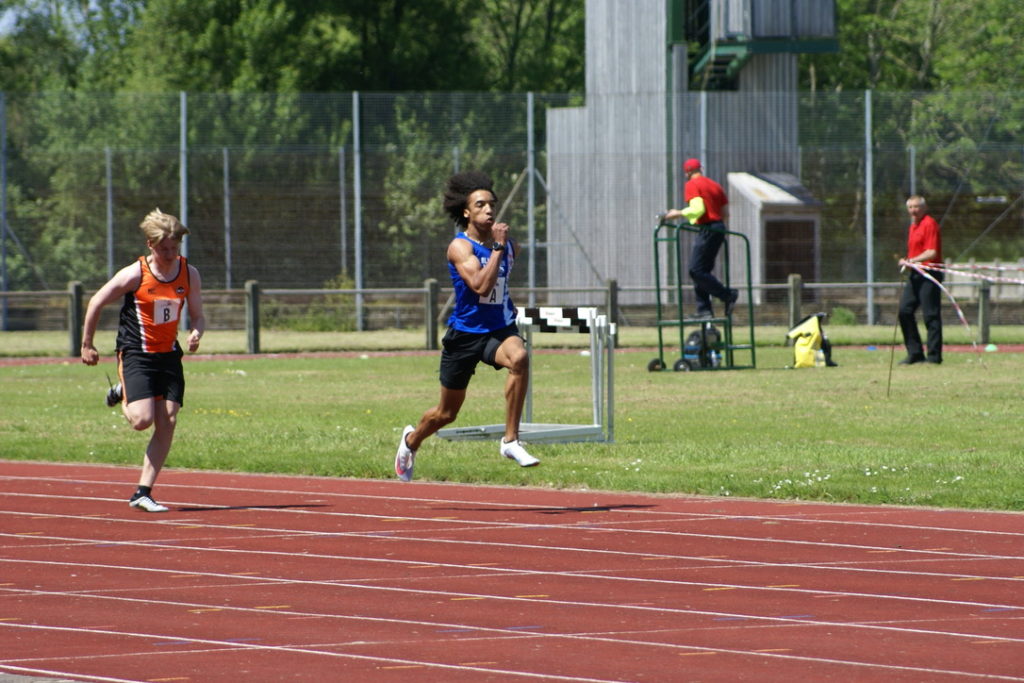 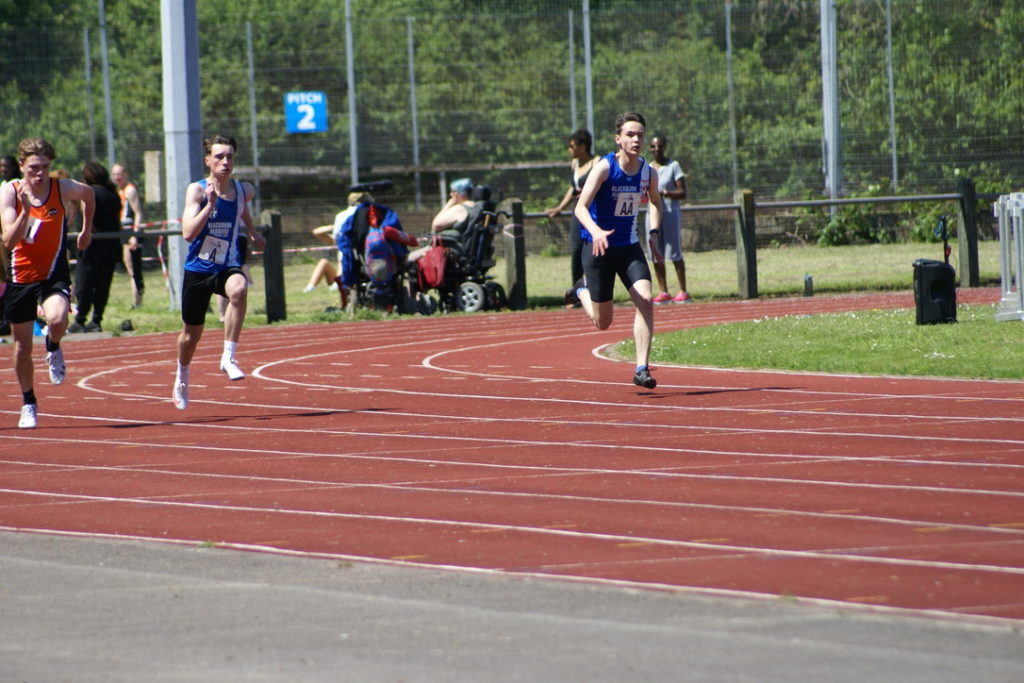 Millie Coy and Amy Wiggans were the pairing in the U20 Women’s 200m which proved to be successful, producing maximum points as Millie won the ‘A’ in a personal best equaling time of 26.8 and Amy winning the ‘B’ in 28.0. 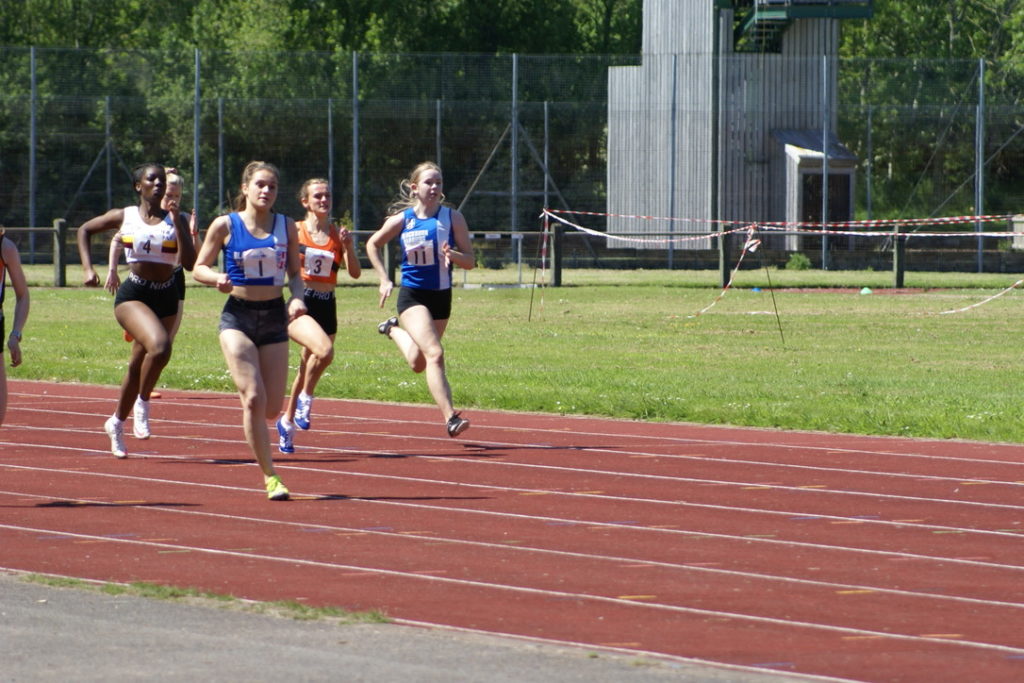 Some Races were run as joint ‘A’ and ‘B’ because of the numbers involved, rather than as separate races and the results then separated as per the original entries. Abbey Riley and Abigail Stratton teamed up for the U17 200m which saw Abbey win the ‘A’ Race in 28.8 and Abigail winning the ‘B’ Race in 27.9 in her first ever run over the distance. Both girls then teamed up in the 300m, a distance which neither of them had ever raced previously, but the result was the same – Abbey winning the ‘A’ Race in 44.9 and Abigail winning the ‘B’ Race in 43.9. Eleesha Charnley came 2nd in th U20’s ‘A’ 400m in a time of 62.0 whilst U17 Eva Knowles ran in the ‘B’ and placed 3rd in 69.3. The U17 Women’s Team featuring Hollie Cubbon, Keira Haxton, Abbey Riley and Eva Knowles came 2nd in the 4 x 300m clocking 3.26.1. In the 4 x 400m, the Harriers were represented by Abigail Stratton, Eleesha Charnley, Millie Coy and Amy Wiggans who also placed 2nd in a time of 4.40.2. 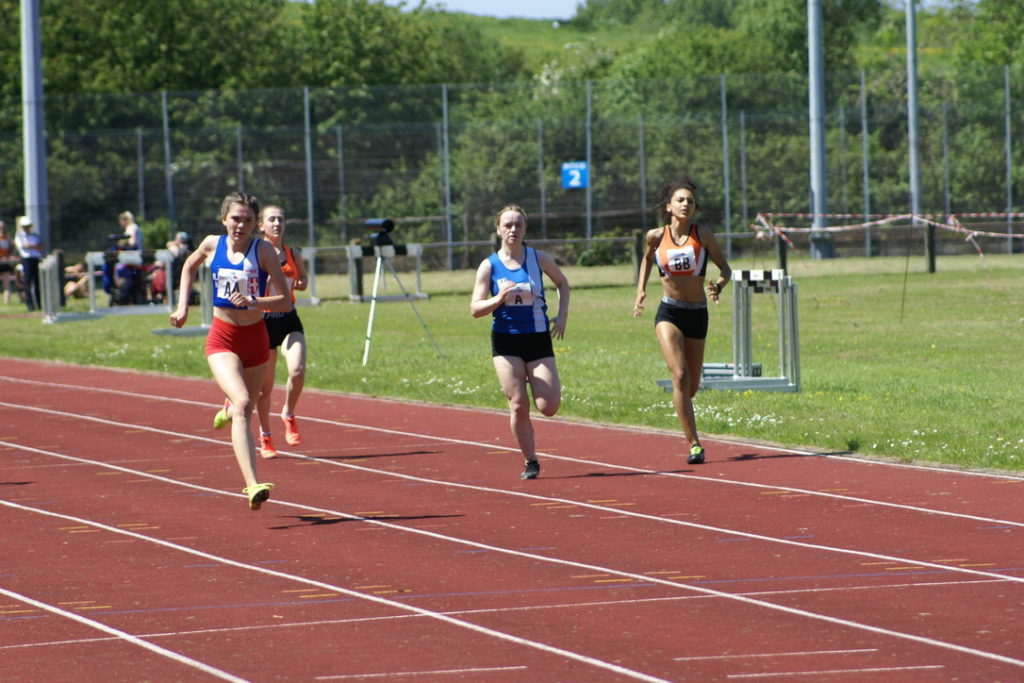 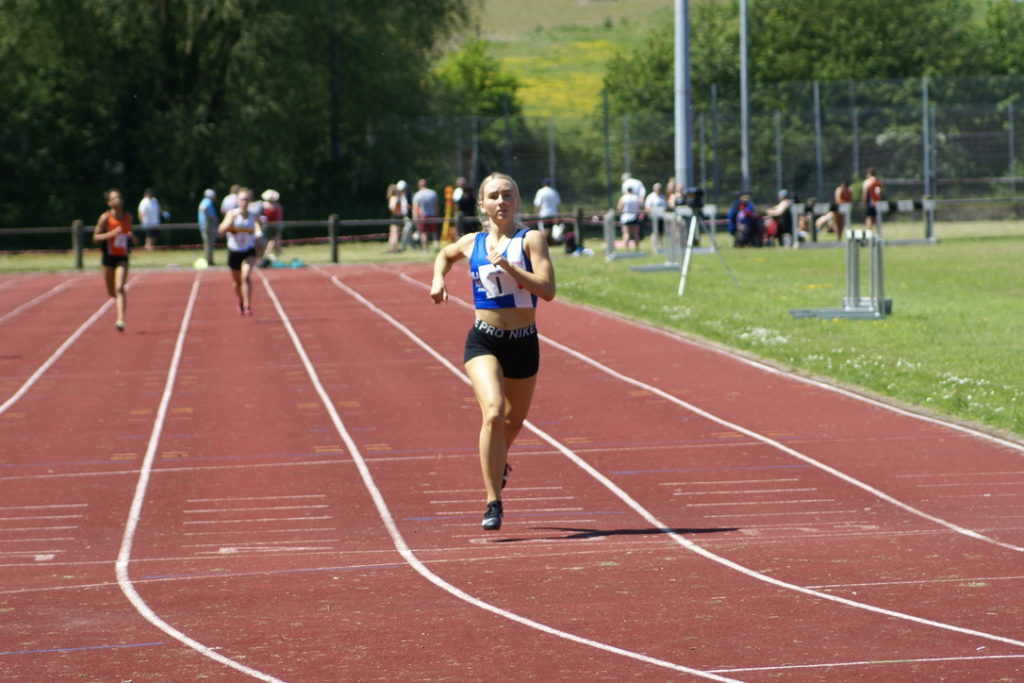 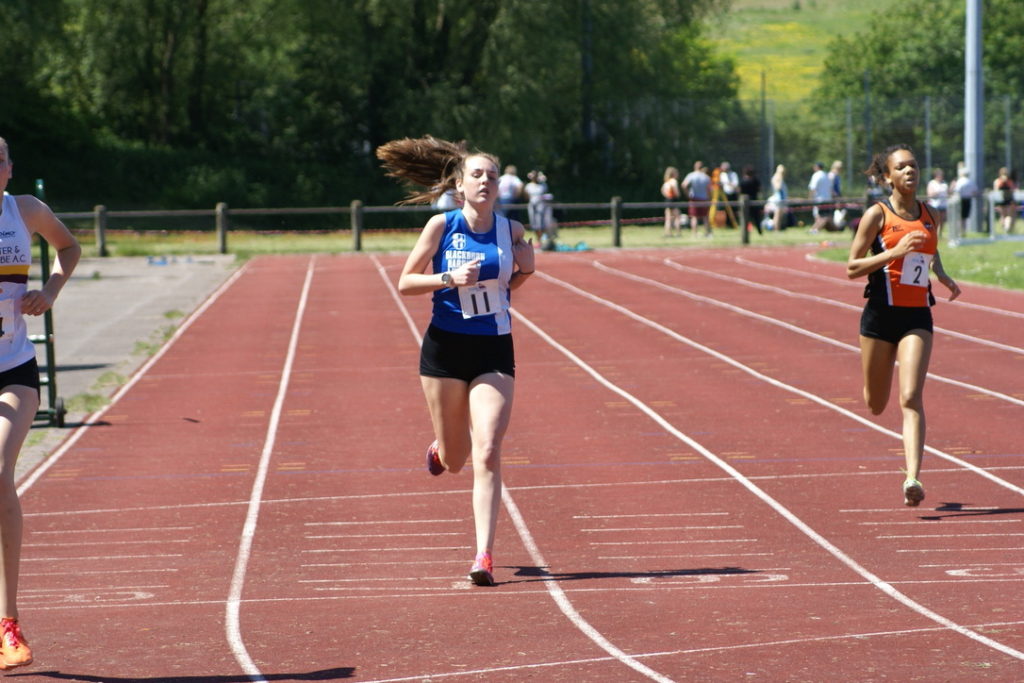 Unfortunately there was only limited Throws events on the day with Hammer and Discus not being available. The U20 Women’s Javelin saw Millie Coy and Eleesha Charnley take maximum points in winning both ‘A’ and ‘B’ – Mille throwing 33.54 and Eleesha 13.94 in her first ever attempt at the event. Grace Bontoft finished in 3rd spot in the U17’s ‘A’ Shot Putt with 7.46m, just outside her personal best. 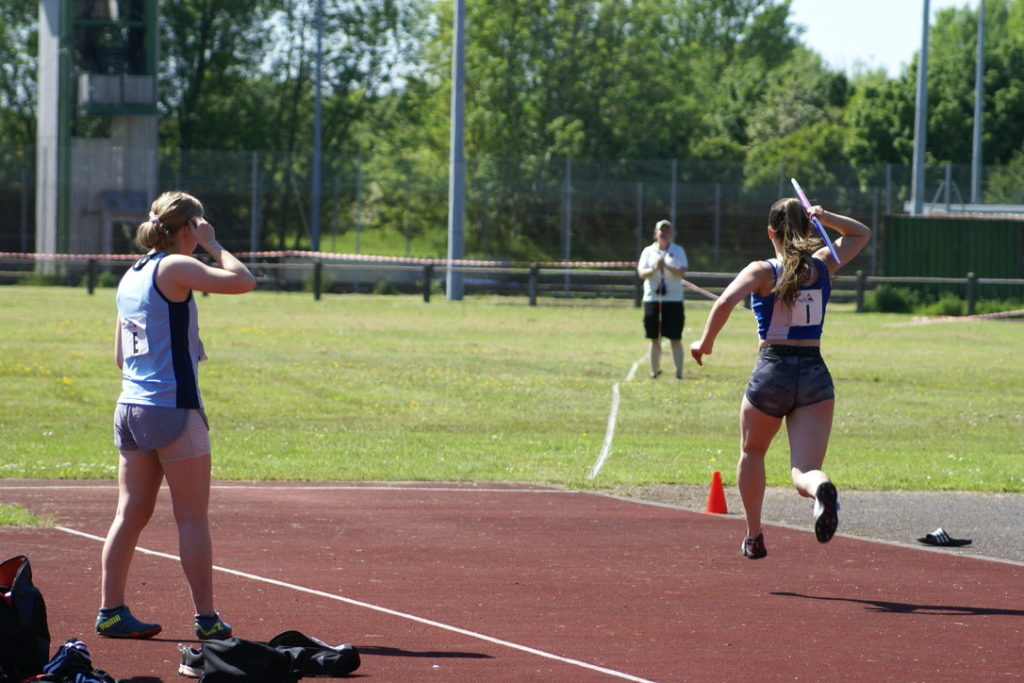 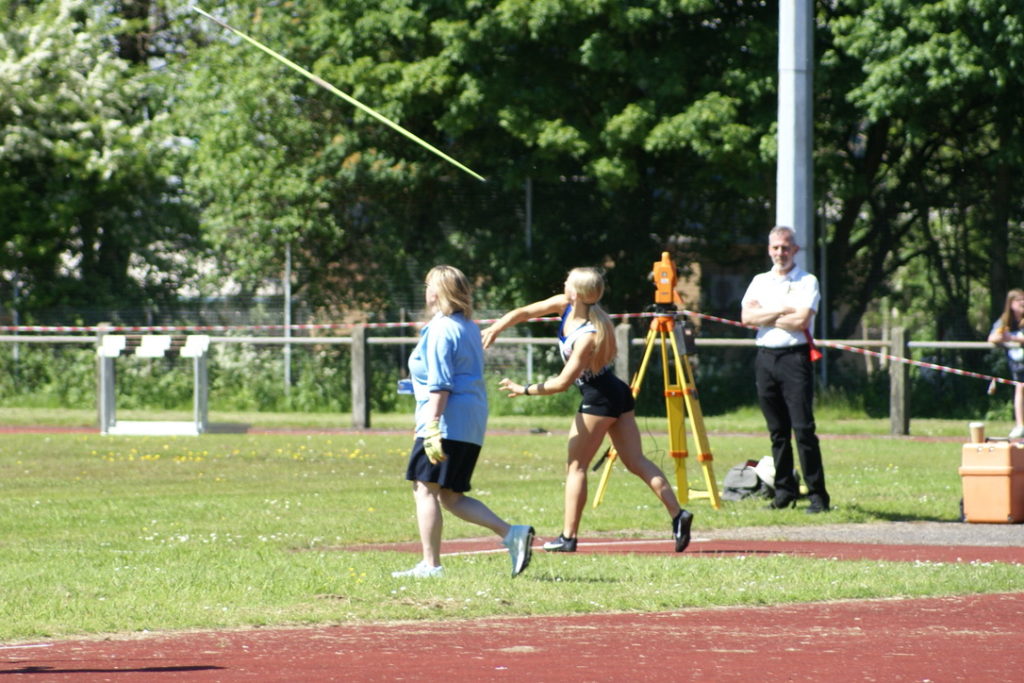 Pole Vault wasn’t available in Jumps. George Whittaker and Fawwaz Mustapha were the Club’s athletes in the U20 Men’s Long Jump. George fininished 2nd in the ‘A’ with `a massive new PB – adding 1m 16cms – as he leapt out to 5.66m. Fawwaz won the ‘B’ and he too set a new PB by 22cms with his jump of 5.62m. Poppy Preece and Eva Knowles were our athletes in the High Jump which saw both athletes clear 1.35m. 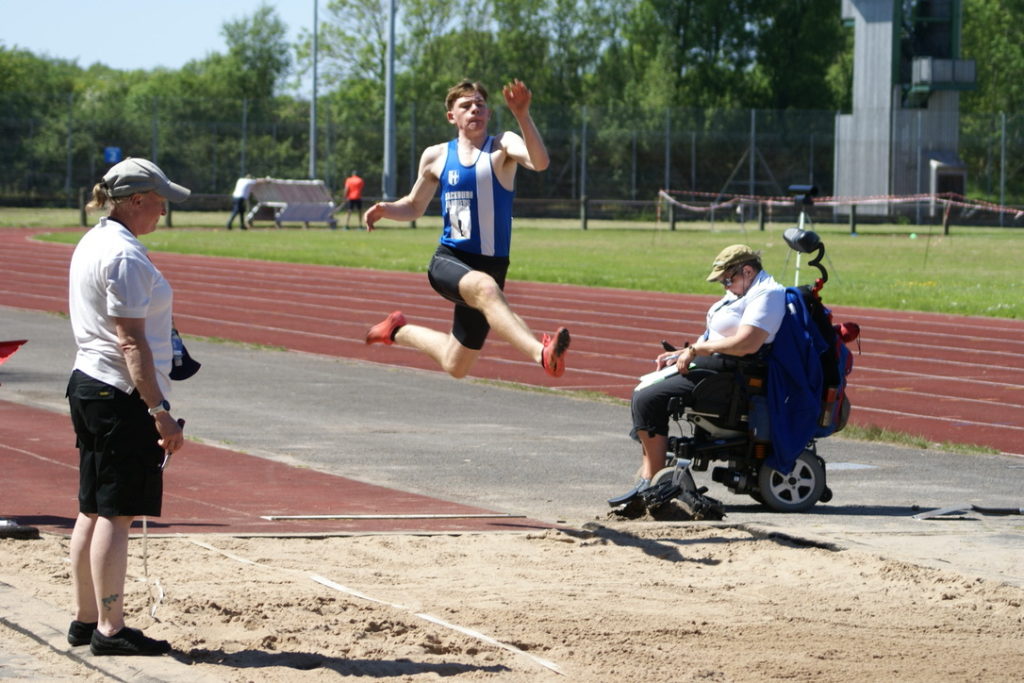 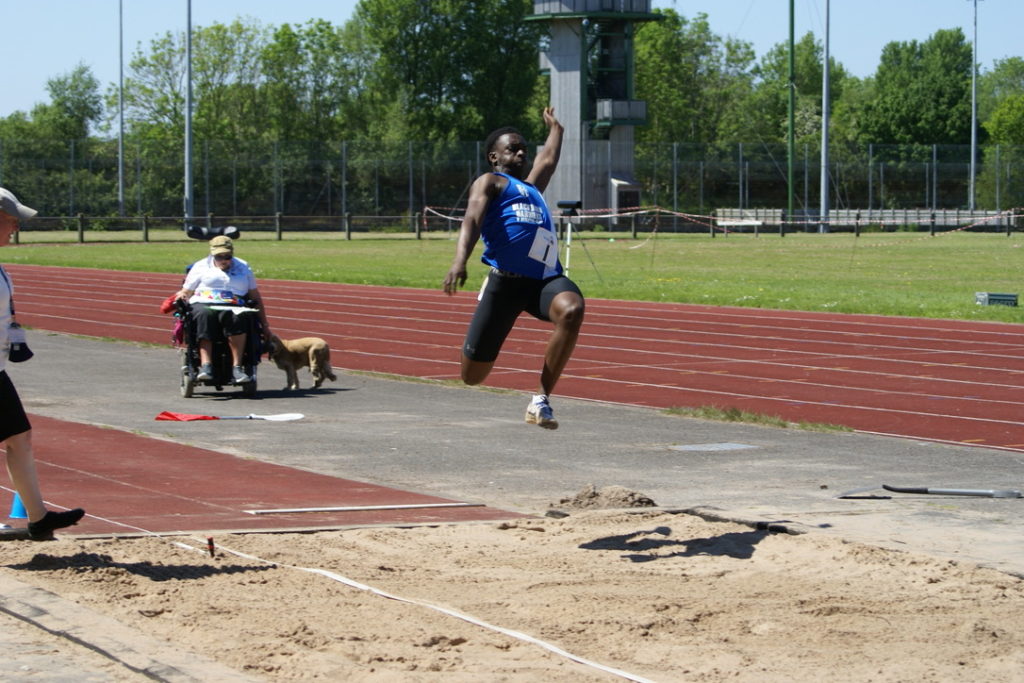 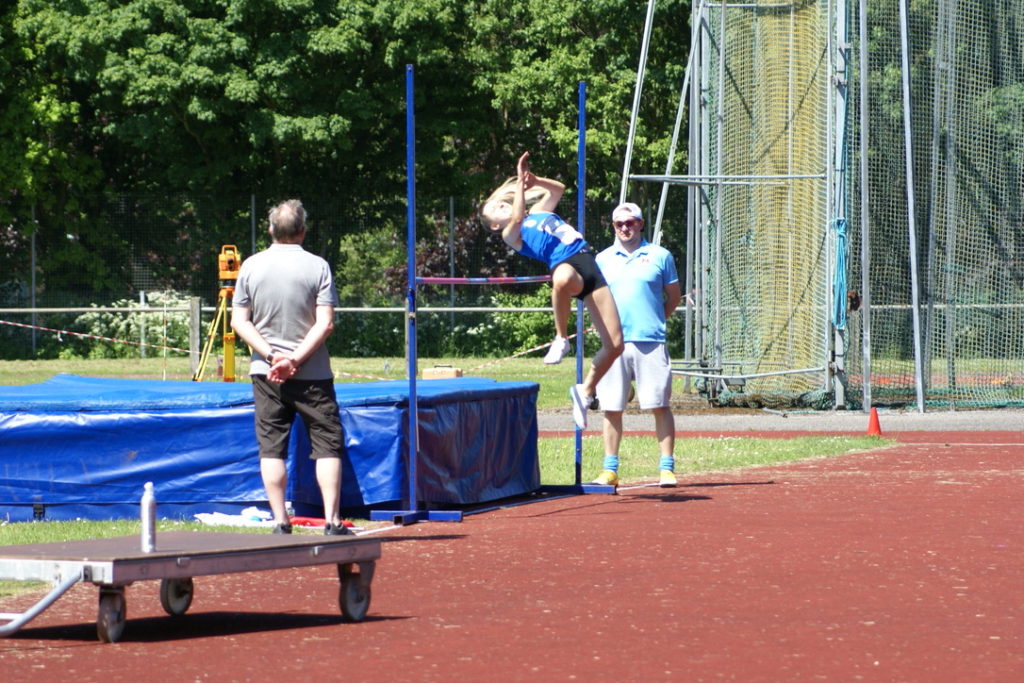 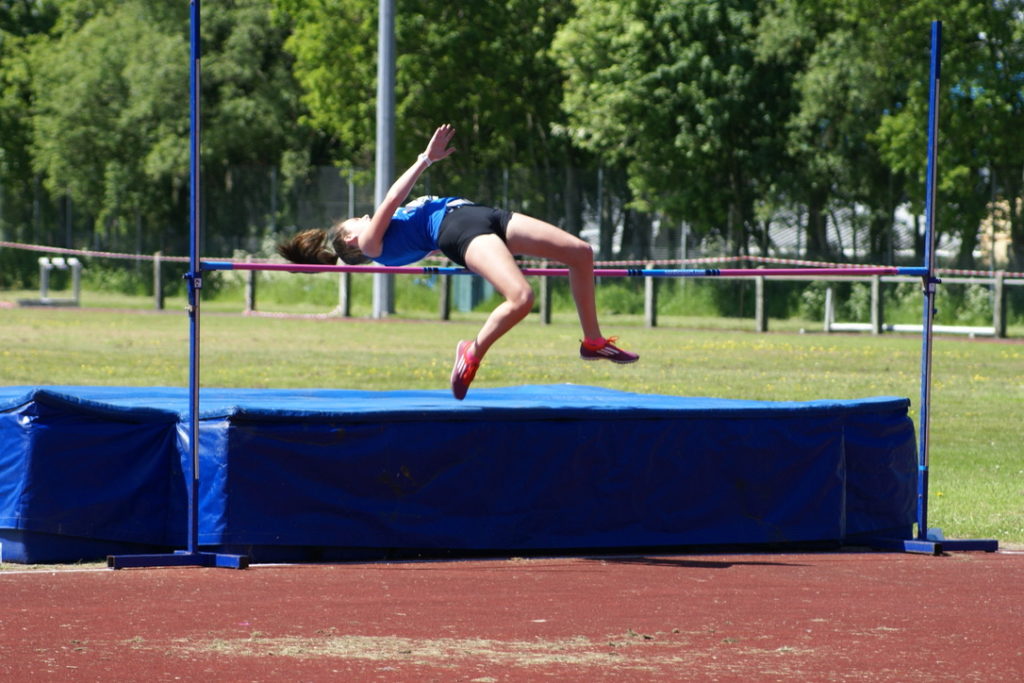 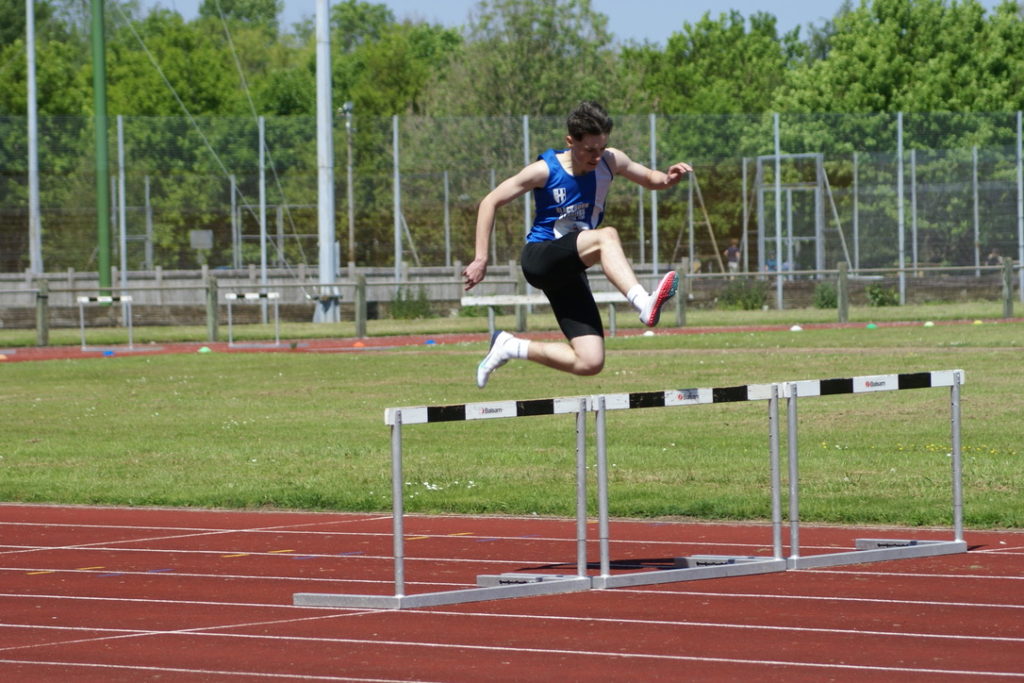 There was no 1500m or 3000m races for the men and steeplechase wasn’t available at the Track. U20 Men Matt Ramsden and Harry Wood ran the 800m with only one other athlete from Border Harriers. The race turned out to be a contest between Matt and Harry, the outcome being Matt in 1st with a big new PB by four seconds clocking 1.59.6 and a new PB also for Harry by a massive nine seconds as he came home in 2nd with 2.01.2. 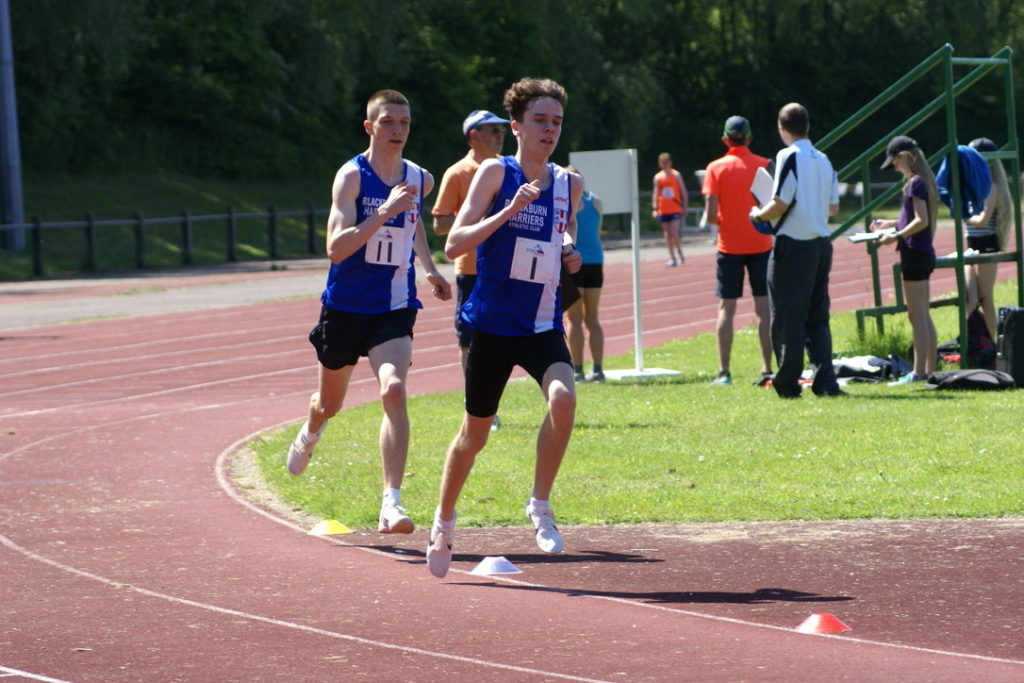 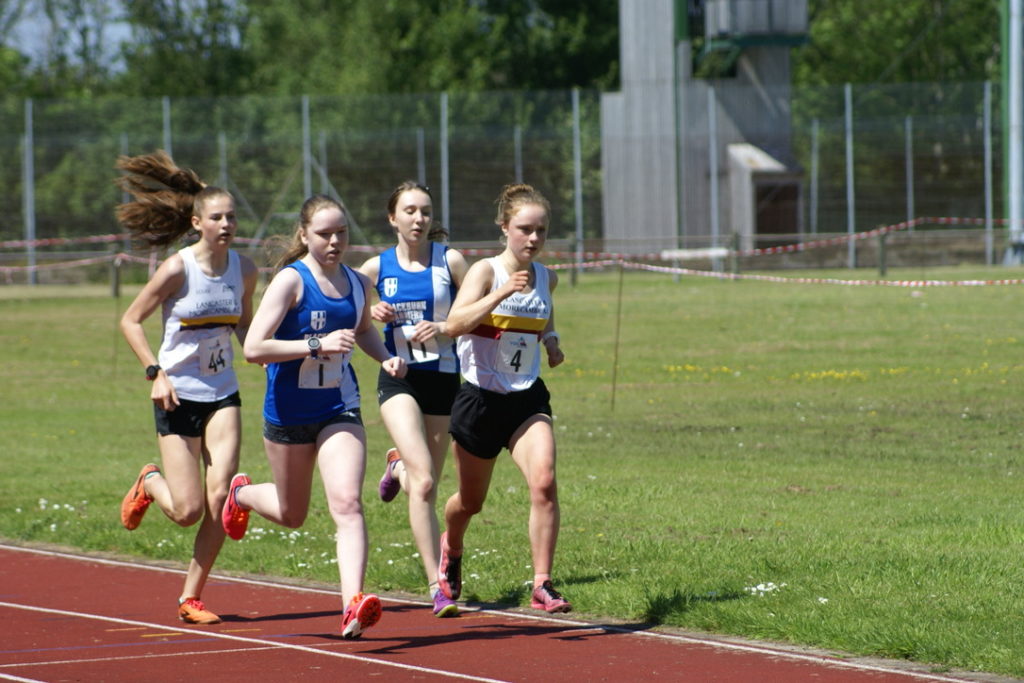 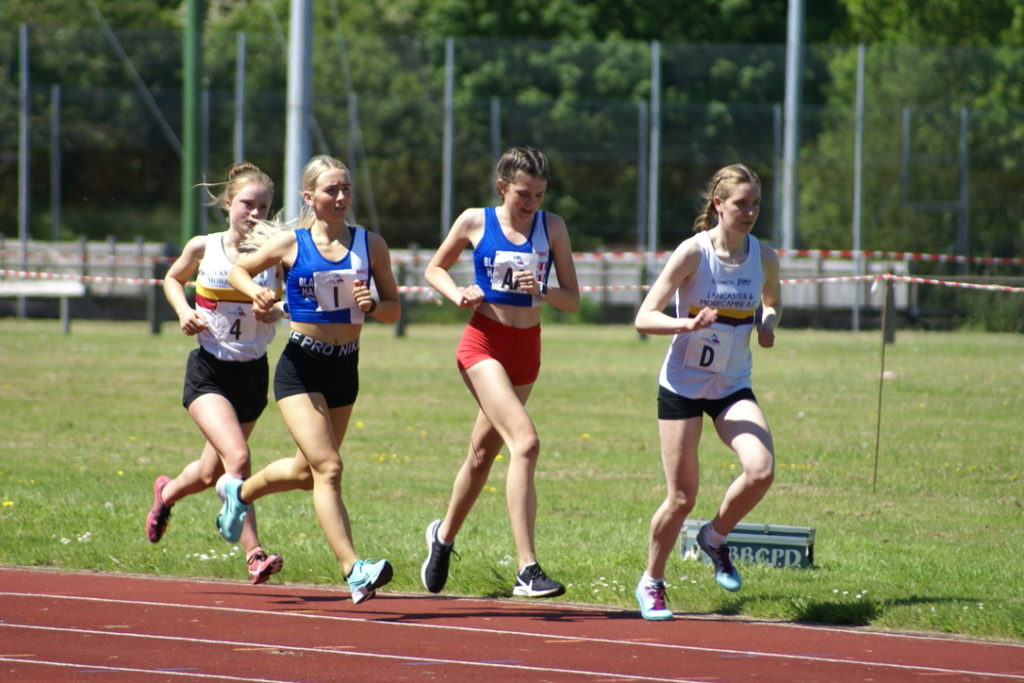 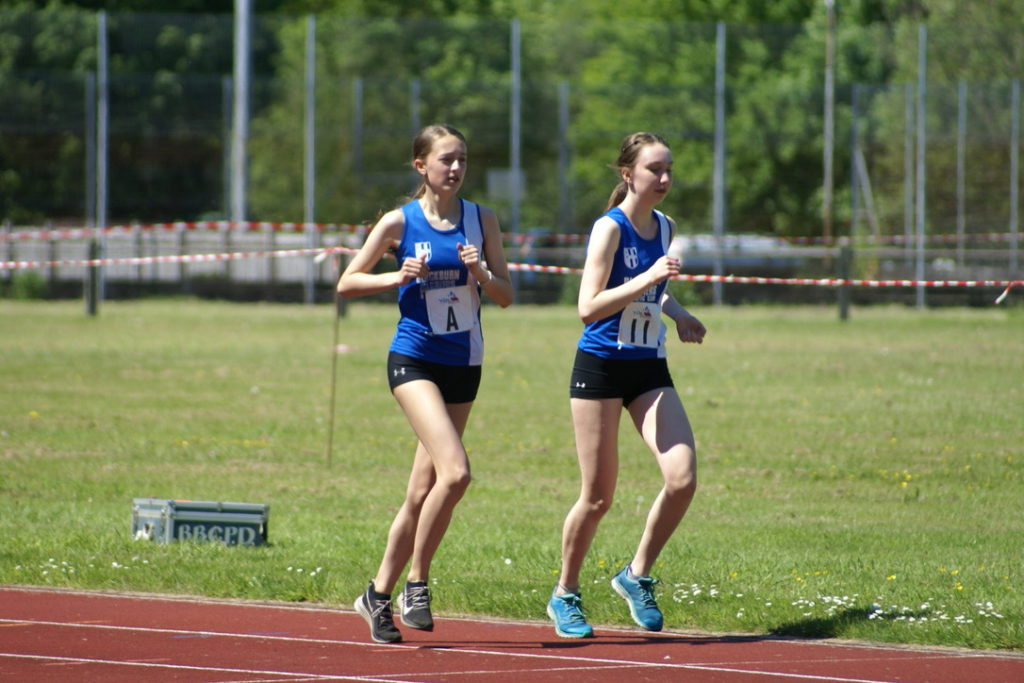 The latest in the series of Grand Prix Tuesday evening meetings – June 1st – saw six Blackburn Harriers contesting 800m,1500m and 3000m – Mark Magee, Marc Hartley and Ryan Bradshaw all entered the 3000m whilst Jack Paget-Fowler and Codie Dewhurst went in the 1500 and finally Joe Gebbie in the 800m.

Joe Gebbie was racing his second 800m of the season, following a period of rehabilitation due to injury. His first, at Trafford on May 20th saw him run just outside his personal best, clocking 2.00.24 in 3rd spot. Tonight Joe not only improved on that but set a new PB by just over half a second when he finished 2nd in 1.58.42. Delighted with his Race, Joe told us “Quality to get a PB and finally move off 1:59! Was last at the break but moved through the field well and gave it a strong finish. Great running from the other Harriers too. Excited to push on from here!“

Bottom of age U17 Codie Dewhurst was in Heat 3 of the 1500m having already set two new personal bests over the distance in his previous outings at Trafford in April and May. He set off in June on the same patch with another new PB by three seconds as he came home in 5th spot, out of a field of eleven athletes with a time of 4.33.10. Jack Paget-Fowler – also a bottom of age U17 – ran in Heat 4 and kept the new personal bests going as he placed 5th with a new PB time of 4.43.93.

Senior Mark Magee is making in roads over 3000m for sure. Starting the season with a personal best of 9.33.8, he chopped half a minute off that on May 18th, running 9.03.24 and last night cut another six seconds off that to set himself a new PB time of 8.57.09 in 3rd position in a field of fifteen. Afterwards he told the Club “I was feeling more confident going in to this 3k race than 2 weeks ago. The heat doesn’t bother me so the conditions were ideal for me. I set off too fast but I didn’t want to make the same mistake as last time. Happy to break the 9 minute barrier and come home in 8.57.”

Seniors Marc Hartley and Ryan Bradshaw were also in the same Heat with Marc placing 9th in a time of 9.14.62 commenting afterwards “Summer has finally arrived, and to accompany that there was some red hot racing at Tuesday night’s Trafford open. The Harriers were once again well represented in both junior and senior age groups with some dazzling displays of pure racing. Mark Magee set another pb, dipping under 9 minutes in the 3000m for the first time and there was a racing masterclass from Joe Gebbie in the 800m. From a personal perspective the times aren’t in the same ballpark I was hitting 10 years ago but it’s always nice to get that racing feeling back regardless of what the clock says. Ryan ran just outside his personal best on a hot night for endurance runners, posting 9.28.14 and spoke to the Club after his Race telling us “another great Trafford event in warm conditions. Some great performances from Blackburn runners , particularly Mark Magee breaking 9 minutes and seeing Joe Gebbie running a smart 800m to PB!“