Blackpool or Barcelona – you will find the Harriers competing The penultimate fixture in this years Mid Lancs Cross Country League took place at Blackpool on a very pleasant day. Conditions underfoot were firm with a bit of head wind down the the long straight on  a flat as a pancake course. Amy Davies in the U13 Girls probably had her best race of the Mid Lancs series finishing 3rd (9.43) behind Jasmine Jolly (9.30) and Briony Holt (9.29) and in the process cementing herself into third place overall in the Series. Similarly with Jamie Teare who had his highest placed finish so far in finishing 2nd in a time of 11.03 leaving him 4th overall in the Series to-date. Daniel Brown 19th in 12.36 and Anthony Beresford 21st in 13.11 completed the Boys Team which finished 3rd out of the 4 Teams. Maddie Elliott, Hannah Cookson and Natalya Irvine combined to win the U15 Girls Race on the day which leaves them 3rd overall in the Series. Maddie had an excellent run to finish in 3rd spot with 11.49. Hannah Cookson ran strongly for 6th place (12.20) and Natalya recently returned to training finished 9th in 12.47. Just three Senior Women and six senior Men in the Senior Races. Michelle Teare placed 87th out of 141 runner sin the Women’s Race with 31.37 and Carol Cookson came 95th in 32.12. Lindsay Davies had her first ever Mid Lancs Race and finished in 129th in 37.56 and smiled all the way round! John Chaplin has been away from racing because of injury and last raced in October 2014. However, in his first race back he returned to winning ways taking the V55 1st Prize when he finished 41st in a time of 50.23 in the 464 strong field competing in the Parbold Hill Race on Saturday 14th February. 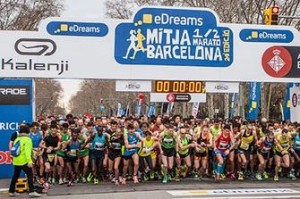 Meanwhile, David Almond decided to run in sunnier climes and took himself off to run the Barcelona Half-Marathon. Dave was happy with the run saying “Pleased with my time of 82.43 for Barcelona Half Marathon. Average pace 6m 12s per mile. Women’s World Record broken in the same race by Florence Kiplagat from Kenya”. V60 Evan Cook ran in the Central Lancashire 5k finishing 72nd in 20.32. He had a battle at the end with Rudolph Maciejkowicz 20.30) from Horwich for the V60 2nd Prize, just losing out by two seconds. Congratulations to Laura Hesketh who set a new PB when she competed in the Valentine’s 10k Race at Lancaster today – Sunday 15th February. Laura came 14th overall in the field of 127 runners, was 2nd Woman in a time of 38.56 which was over half a minute better than her previous best.