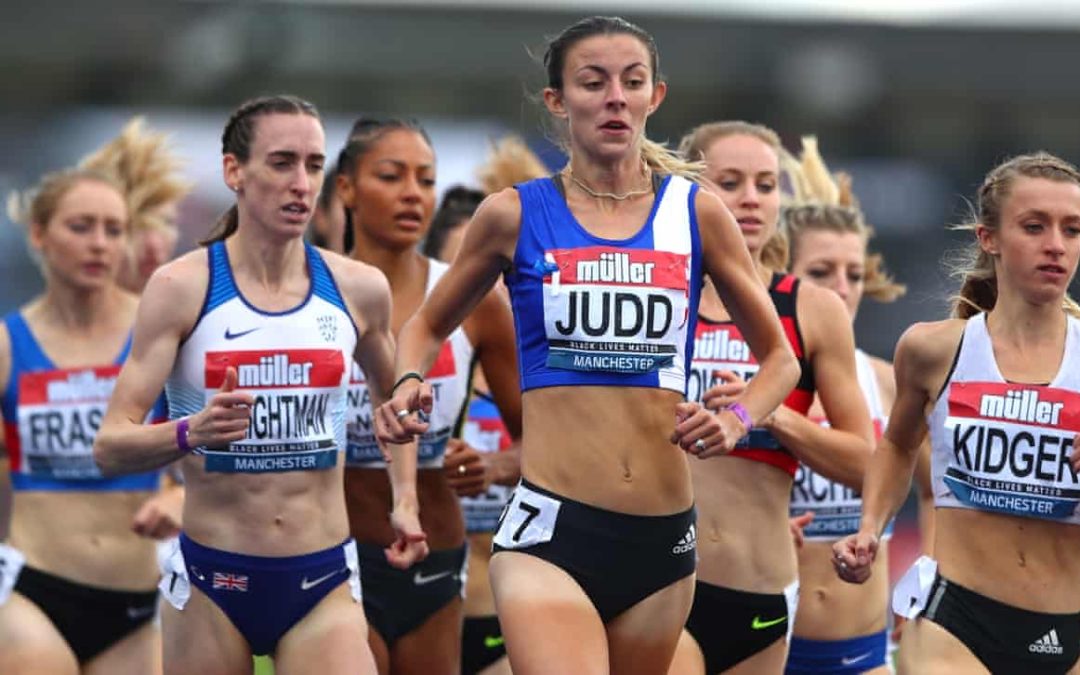 Well what can you say about Jess Judd and that 5000m British Championships Final? Fourteen athletes in the race, producing five seasons bests and nine new personal bests. Jess never moved out of the first two, which saw Amelia Quirk and then Bronwen Owen taking up the running, with Jess always covering any moves to stay in 2nd place. The first 1k was modest at 3.24.16 to say the least for these athletes, followed by an increase in pace for the second 1k clocked in 3.07.78 followed by the 3rd 1k run in 3.08.36 and the 4th in 3.09.80. At the 4000m mark Jess took the race by the scruff of the neck and led it out, winding the pace up even more over the last 600metres, as she strode majestically away from Verity Ockenden in 2nd and Amelia Quirk in 3rd – covering the final 1k in 2.47.42 to win the British Title in a seasons best time of 15.37.52. 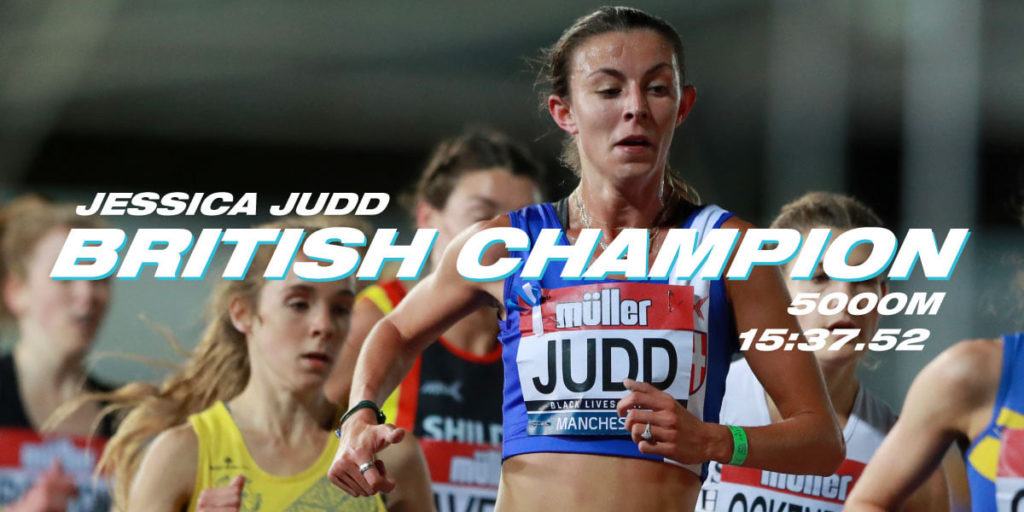 Who would have thought that just over 30 minutes later, Jess would be lining up in the 2nd of two qaulifying Heats for the 1500m? She won her Heat in the fastest time of all the athletes in both Heats, clocking 4.16.37 with lap splits of 71.02, 70.54, 66.29 and a 48.52 last 300m. On Sunday she was out on the starting line in the Final alongside Laura Weightman, Katie Snowden and a number of other very good athletes, none of whom had doubled at the Championships. Typically, Jess took up the running after two laps and started to stretch the race. The first two laps were run in 71.54 and 69.43 and with an increase in the pace, the 3rd lap was clocked at 64.50. Laura Weightman (4.09.76) clocked a rapid 44.29 over the last 300m to secure the title with Jess in 2nd (4.12.35) giving it everything she had down the home straight to take the Silver Medal. 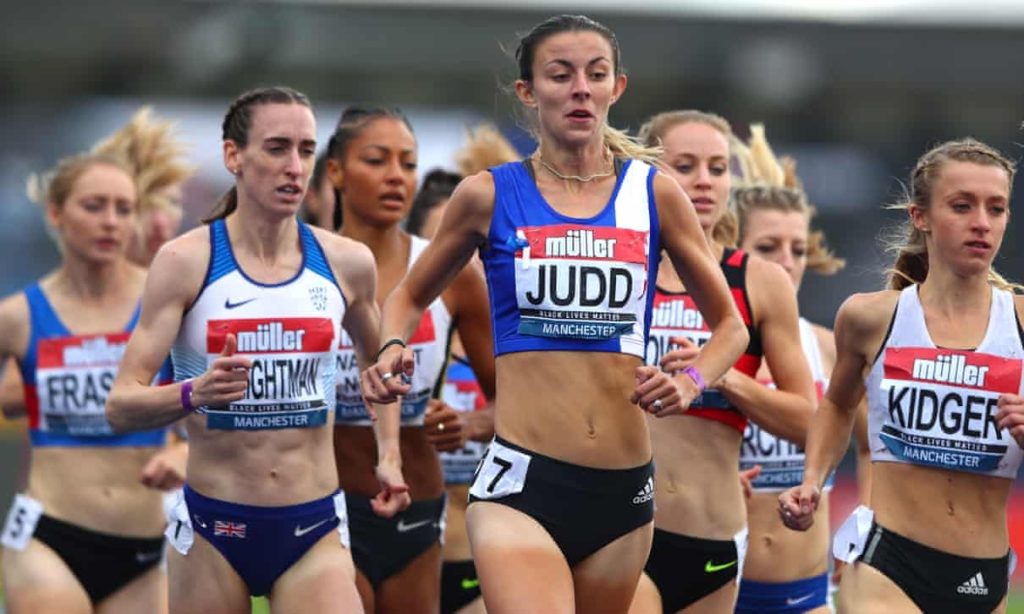 Since June 2019, Markhim Lonsdale hasn’t seen much competition at all. At the National U20/U23 Champion ships in Bedford – June 23rd 2019 – he placed 4th overall in a time of 1.49.38. Since then, his only outings came at a Track Race on August 24th 2019 at Loughborough where he won the 400m in an Open Meeting with a time of 49.13. A year had gone by since he ran that race as he lined up again at Loughborough on August 30th 2020 in the 400m, duly replicating the 2019 result, with another win, clocking 49.99. On Friday evening, Markhim ran in the first of three Heats over 800m at the British Championships. In only his third track race since June 2019, Markhim showed real solid determination to qualify for the Final with a time of 1.50.46. Qualifying for the Final was based on the first two in each heat plus the two fastest following times, both of who came from the first Heat – Markhim along with Liverpool’s Max Wharton. Markhim is coached by Blackburn Harrier Paul Bradshaw who has an 800m personal best himself of 1.47.37. Come Saturday afternoon – at 14.50pm – Markhim lined up in a field where it was considered that the Gold and Silver would be fought out by Jake Wightman and Daniel Rowden, which is what transpired – Rowden capturing the title with a stadium record of 1.45.94 and Wightman in Silver Medal spot (1.46.26). Markhim gave it all he had on the day to place 6th overall, clocking 1.51.55 which represented a pretty good weekend for him after over a year since he set foot on a track to race 800m.

Leading up to the British T & F Championships, something very unusual happened at the Wanda Diamond LeagueLausanne (SUI) 2nd September 2020. A street Pole Vault Competition took place featuring some of the world’s best Pole Vaulters and, every jump was shown in a 2 hour programme on British TV. Rather than having to listen to a commentator tell us “and this was Holly jumping earlier” we actually saw every single vault which was an amazing experience, not just for Pole Vault fans, but for athletics fans everywhere. (Lausanne Pole Vault Results). It was a fabulous night of vaiulting which saw two men clear 6.00m in the same competition and in the Womens event, Holly  didn’t come into the competition until the bar had reached 4.54m and cleared both that height and the next one of 4.64 at the first attempt which put her in the lead at that particular stage of the competition. However, she ultimately failed to clear the next height of 4.72m which left her in 2nd place overall on the night behind Sweden’s Angelica Bengstton who cleared 4.72m on her final attempt. Holly spoke to the organisers of the Wanda Diamond League event after the competition had finished commenting “It was really important to come out here today and perform for the fans considering everything that hashappened this year. The competition was great and I really enjoyed being able to compete alongside themale athletes as we were able to feed off the enegry from each other while competing. Being able to behere in the centre of the city in front of all the fans knowing that they have come out just to watch us(with Pole vault being the only event on today) really gave me goosebumps and I appreciate their support. The organizers have done a great job and I believe these city events will feature more in the future”.

This was the event that led Holly into the British Championships this weekend where she was expected to add yet another British Title to her impressive record. Entering the competition at a height of 4.25m, which she cleared first time, setting a new stadium record, she increased that record to 4.35m with her next Vault to win the title from from Sophie Cook (4.25m). It had been a very poignant and emotional weekend for Holly which she explained in her interviews after receiving her Gold Medal, which can be read and heard here.