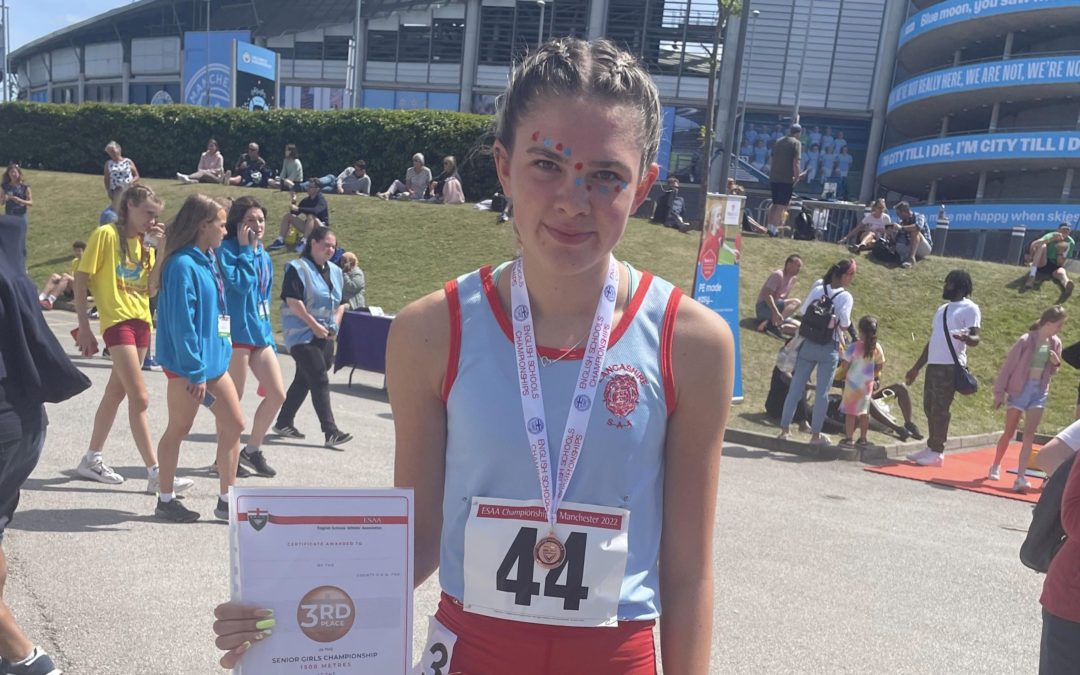 The English Schools Track & Field Championships was held at Sportcity over two days – 8/9th July – which included ten Blackburn Harriers all qualifying from their Counties with the required entry standard………..Daniel Nuttall, Millee Schofield, Kara Dacosta, Matthew Heywood, Emma Harrison, Dexta Thompson, David Holman, Oliver Gill, Abigail Stratton and Isabel Holt. To achieve the qualification standard for English Schools is an achievement in itself and the athletes who gain it are to be congratulated for their effort and determination in just getting there spread as they were, across Sprints, Throws and Middle Distance events. Great credit also to their respective Coaches who have helped get them to this level. 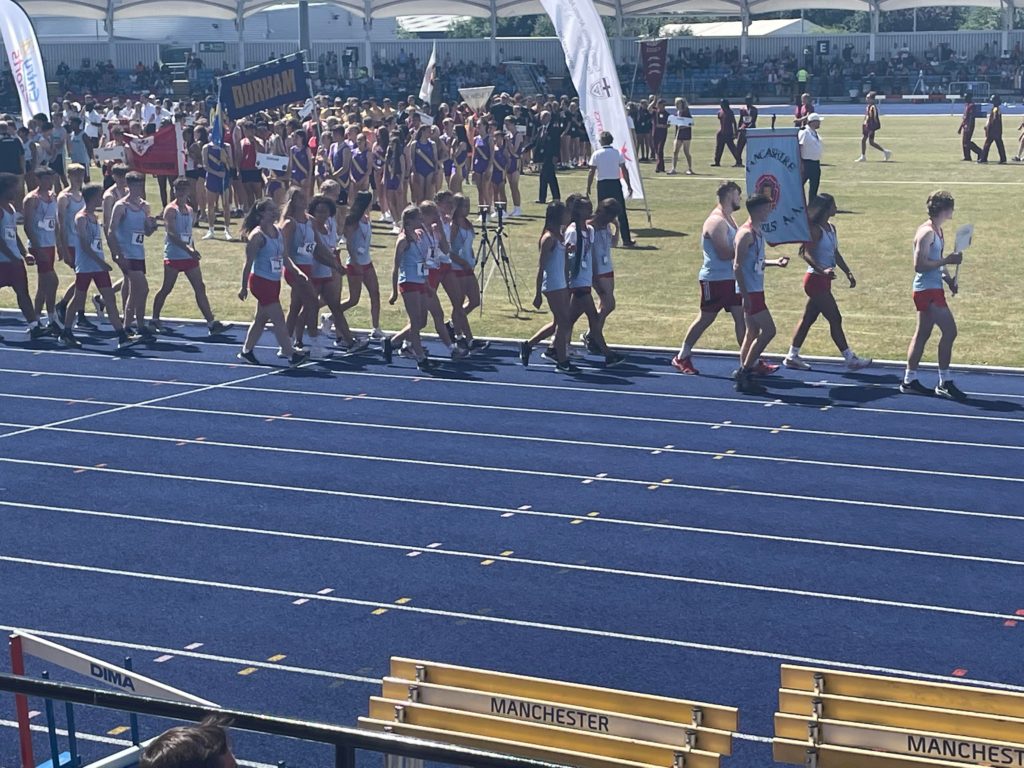 Day one witnessed some very good performances from the Harriers starting off with the Inter Girls 300m in which Kara Dacosta ran in Heat 3 of 3. Kara was just two tenths outside her best of 41.1 as she clocked 41.3 in 5th place. Next up was  Millee Schofield in the Junior Girls 100m as she won her Heat (4) of 4 in a time of 12.64 to qualify for the semi-final later in the day where she qualified from Heat 1 with 12.82 in 4th place, taking her into the Final on the second day as 7th fastest overall. In the Junior Boys 100m Daniel Nuttall went in Heat 3 of 4 placing 2nd in a time of 11.39 to advance to his semi-final. Drawn in Heat 2 Daniel clocked 11.59 with a -2.9w in 2nd place which meant he qualified for the Final as second fastest athlete overall making it two Finalists in the Junior Boys and Girls 100m. 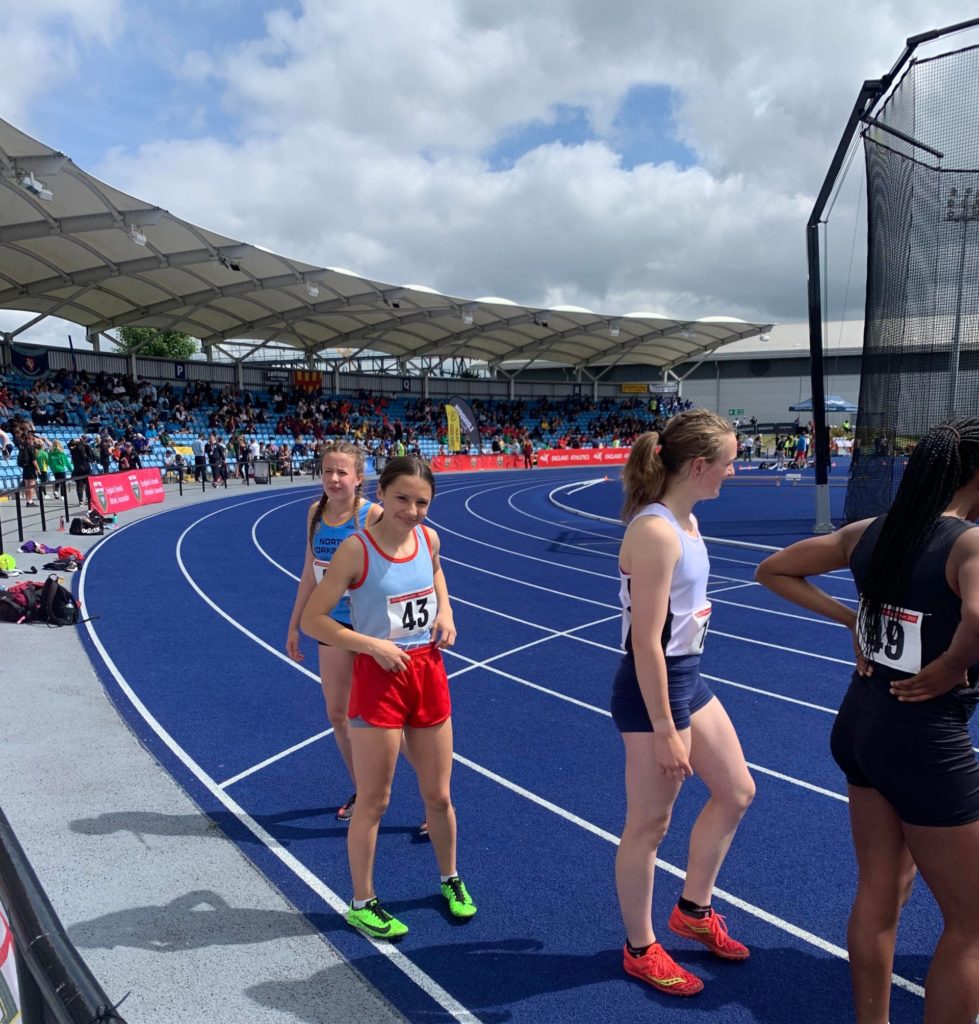 Two Heats in the Inter-Boys 1500m – Dexta Thompson going in the second Heat with a personal best of 4.03.12. Coming with a great kick late on in the race Dexta came in 3rd with a big new PB of 4.00.03 to qualify for the Final on day 2. David Holman was next up in the Senior Boys 1500m which was run over three Heats – David going in Heat 2 with a personal best of 3.57.41. An exceptional last 120m saw David take the 4th qualifying spot in a new PB of 3.57.12 for the Final. The Junior Boys 800m featured two Heats in which Oliver Gill went in Heat 1 going in with a personal best of 2.05.07 – Oliver running a new PB of 2.04.94 to finish in 5th spot to just miss out on the Final by 0.56 of a second. Matthew Heywood was so, so close to getting on the Podium in the Senior Boys Hammer as he placed 4th with a throw of 55.84m, just 3 cms away from the Bronze Medal position. Amazingly, the three medals were all won by athletes from the same County – Wiltshire, something which we believe may never have happened before.

Day 2 and it was Isabel Holt in the Final of the Inter-Girls 3000m starting the day for the Harriers athletes. The race was won in a new Championship Best Performance of 9.21.34 by Devon’s Innes Fitzgerald having taken the race out very fast from the gun and leading the whole way. Isabel lined up with a best time of 10.01.33 after starting out the season with a best of 10.24.6 showing an improvement of 23 seconds – maintaining that imrovement again with a 5th placed time of 10.00.40 and another new PB. At this stage of the Championships there were new personal bests for Oliver Gill, Dexta Thompson, David Holman and Isabel Holt.

Dexta Thompson was the next athlete up in the Final of the Inter-Boys 1500m and had another great run to clock successive new PB’s – first in the Heats and now in the Final – with 3.59.40 in 6th place. The race really started to motor over the last 450m and it was at this point that Dexta dug in, trying to stay with the pace and was rewarded with that new personal best and his first sub 4 minute clocking.

Abigail Stratton lined up in the Senior Girls 1500m which was taken out by Cheshire’s Holly Weedall. Abigail whose personal best was 4.28.45 never lost touch with the leaders and came through with a strong finish to post a new PB of 4.27.99 to take 3rd place and the Bronze Medal. David Holman followed Abigail’s Senior Girls 1500m as he ran in the Senior Boys 1500m Final. David had to run a new personal best in the Heats to qualify for and was up against some very fast athletes in the Final, most of whom were faster on paper – David finishing with a time of 4.04.06. 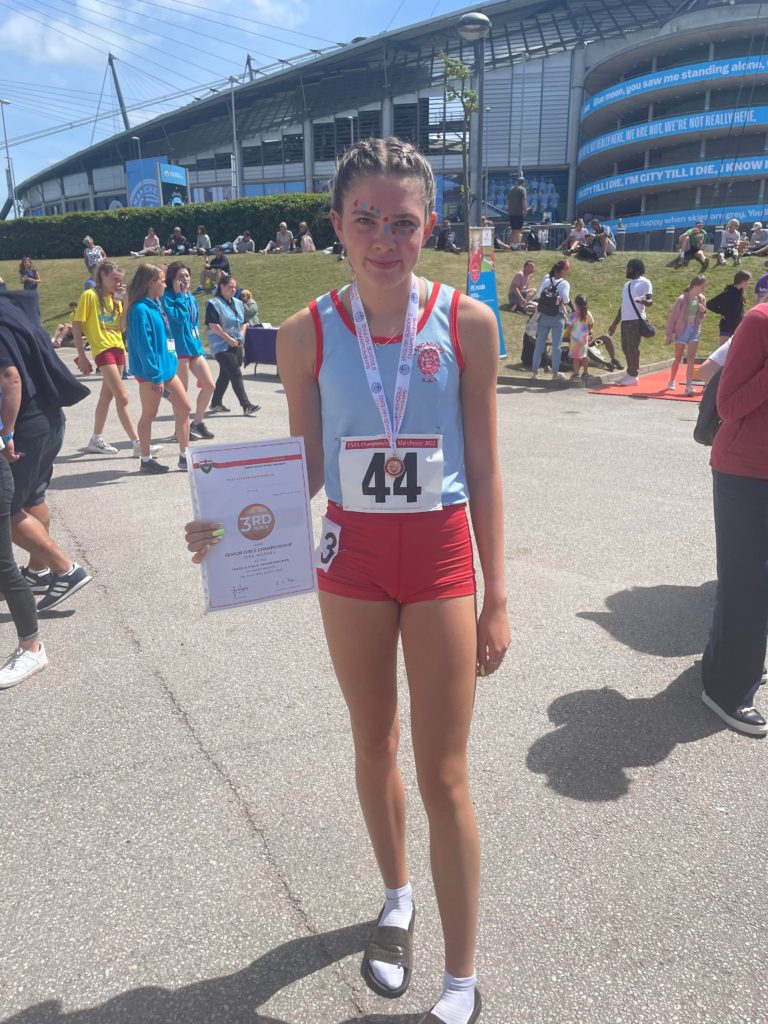 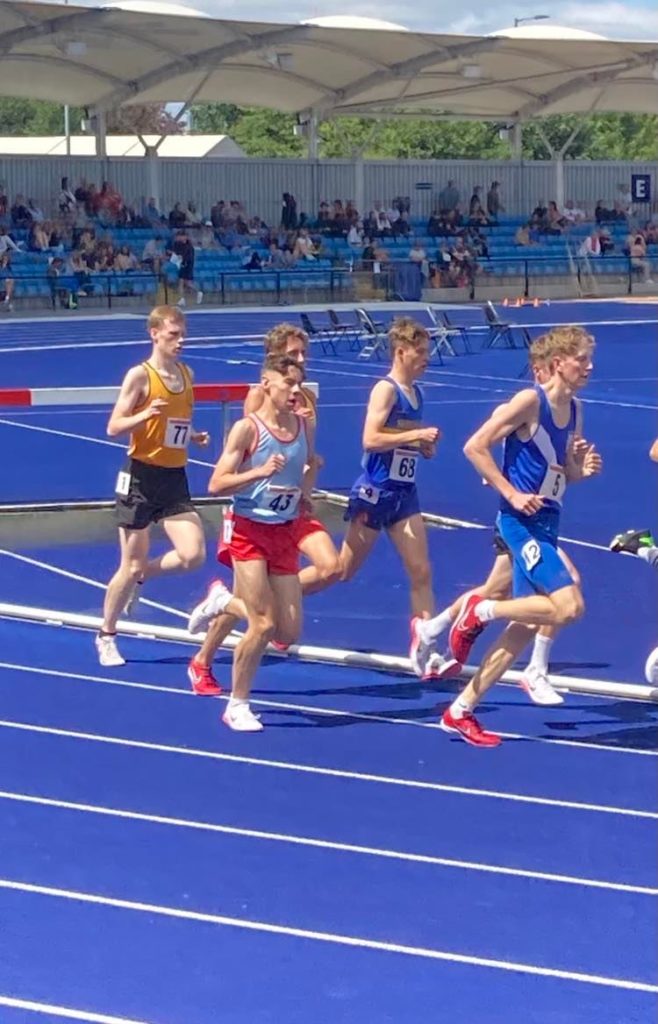 Forward to mid afternoon and it was the Junior Boys and Junior Girls 100m Finals. Daniel Nuttall had to come through his Heat and Sem-Final as did Millee Schofield to qualify for the Final. First up was the Junior Boys Final with Daniel starting in Lane 5 and he made it the second Medal of the day for Blackburn Harriers athletes as he took 3rd place and the Bronze Medal in a time of 11.44 whilst Millee – starting in Lane 1 – was just 8 one hundreths outside her personal best as she clocked 12.68 in 6th place in her Final. 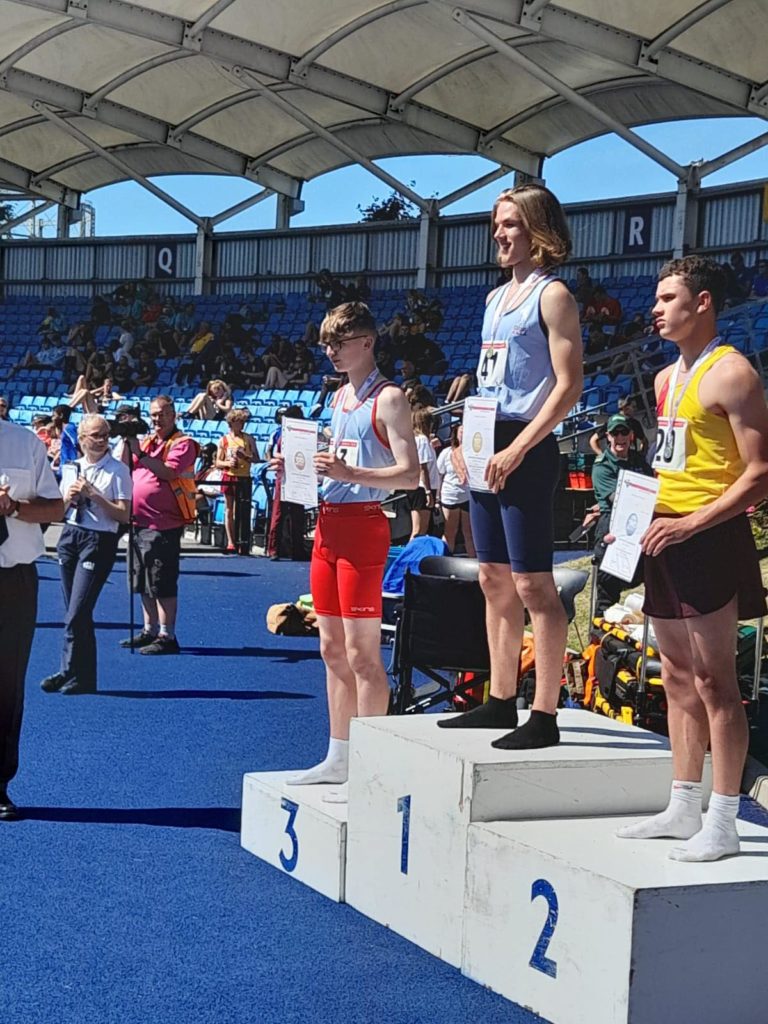 Emma Harrison who is at Number 6 in the National Rankings for U20 Women’s Hammer (4kg) with 46.93m was in the Senior Girls Hammer Final late on the second day of the Championships – the Hammer events being held at Longford Stadoium in Stretford. Emma came in 7th in the 11 string field with a throw of 43.72m.

Final events of the Championships were the Relays in which Blackburn Harriers athletes 1500m athlete David Holman and Hammer athlete Matthew Heywood were part of the Senior Boys 4 x 100m team which finished last in 48.23. Daniel Nuttall was competing for Lancashire in the Junior Boys 4 x 100m. With Daniel on Leg 2 and middle distance athlete Oliver Gill on leg 3 in the Junior Boys, the team finished in 13th place with a time of 47.67.

Away from Track & Field on Thursday night July 7th which saw the Don Ashton Memorial Race held in Darwen with the proceeds from the race going entirely to the East Lancashire Hospice. The race had 134 finishers and among them Blackburn Harriers Josh Holgate, Danny Teare and Richard Taylor. There was a real battle between the first two resulting in a win for Calder Valley V50 athlete Darren Kay in a time of 37.52 from Josh Holgate in 2nd spot running 38.07 for the 5.8miles. Danny (V50) came home in 71st spot (52.55) and followed in by Richard (V55) in 110th place with a time of 62.10. 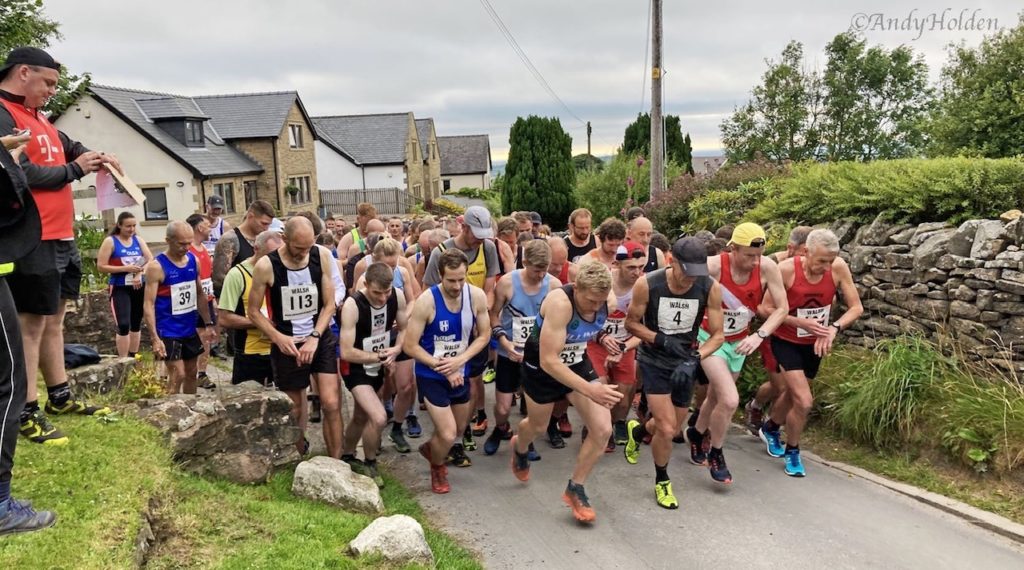 And they are off – Photo courtesy of Andy Holden 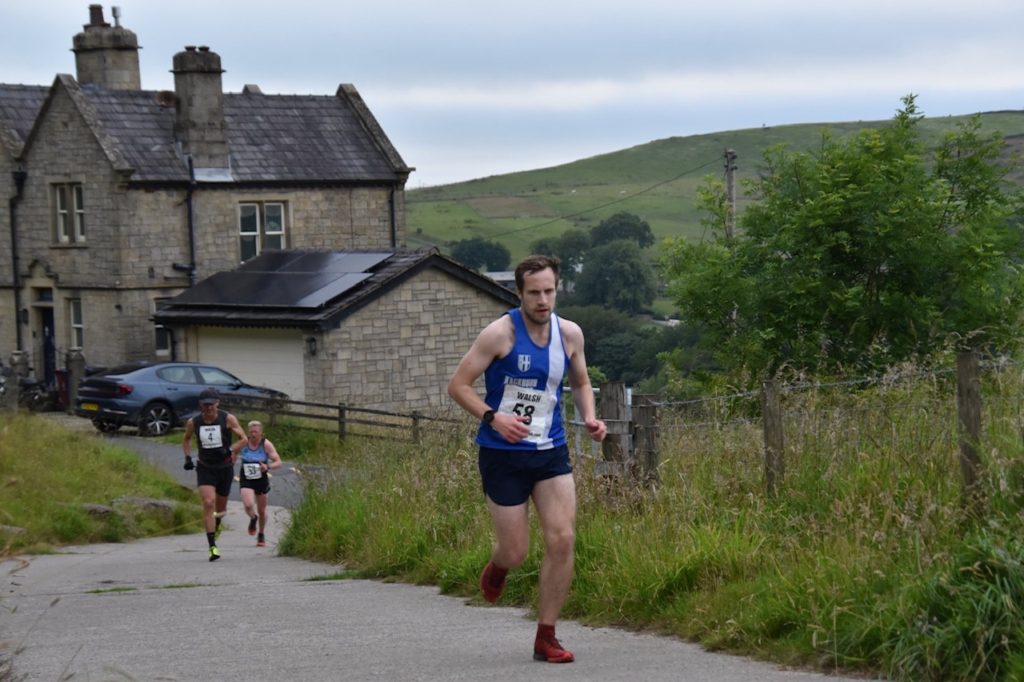 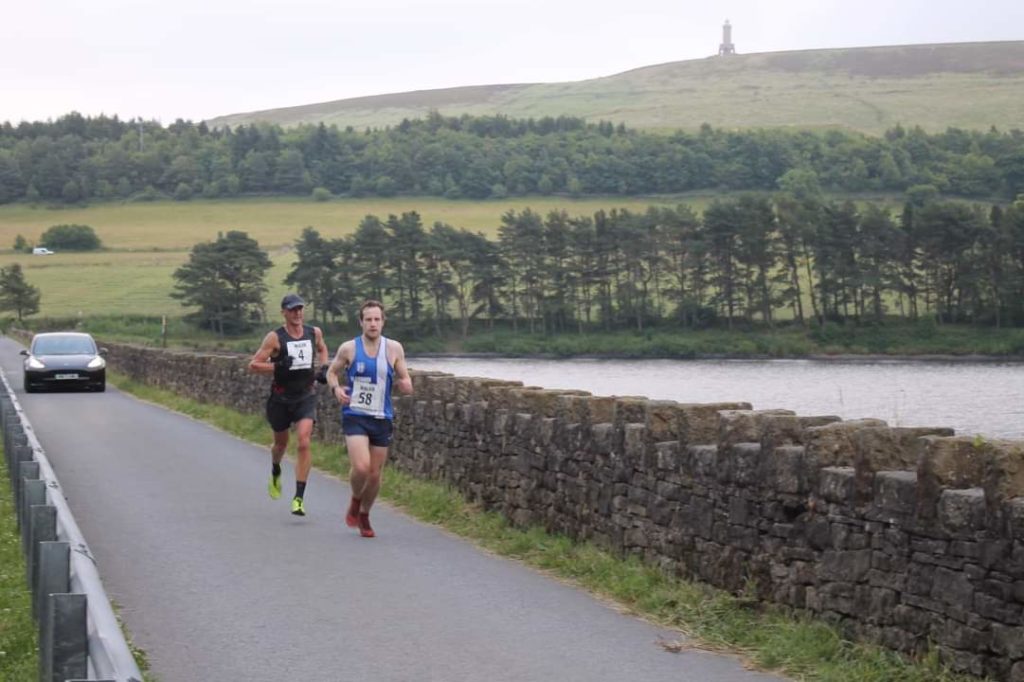 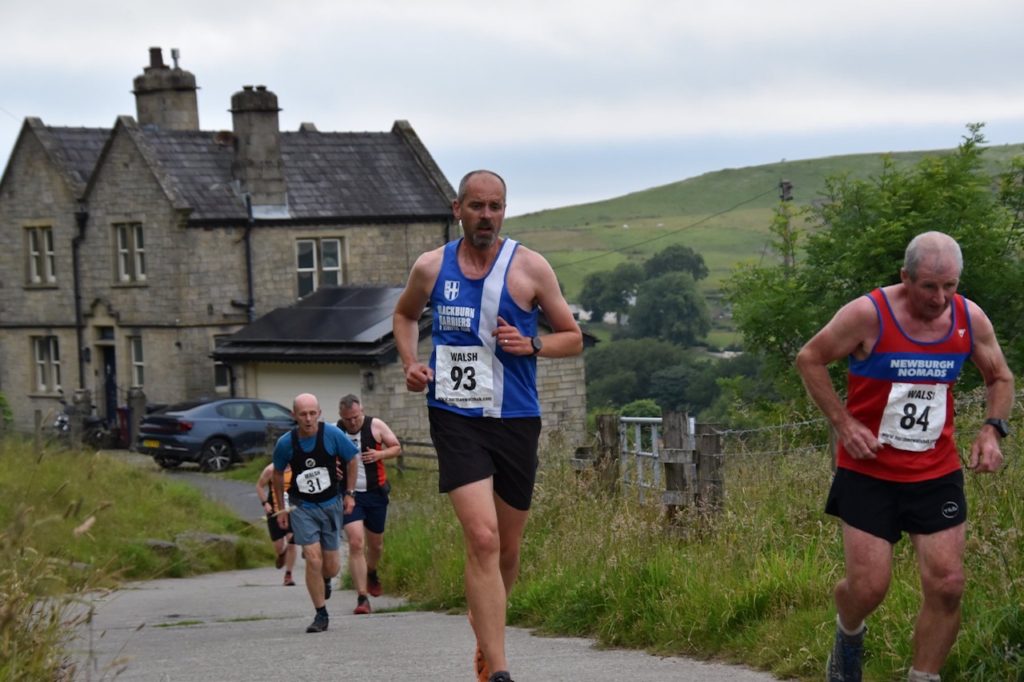 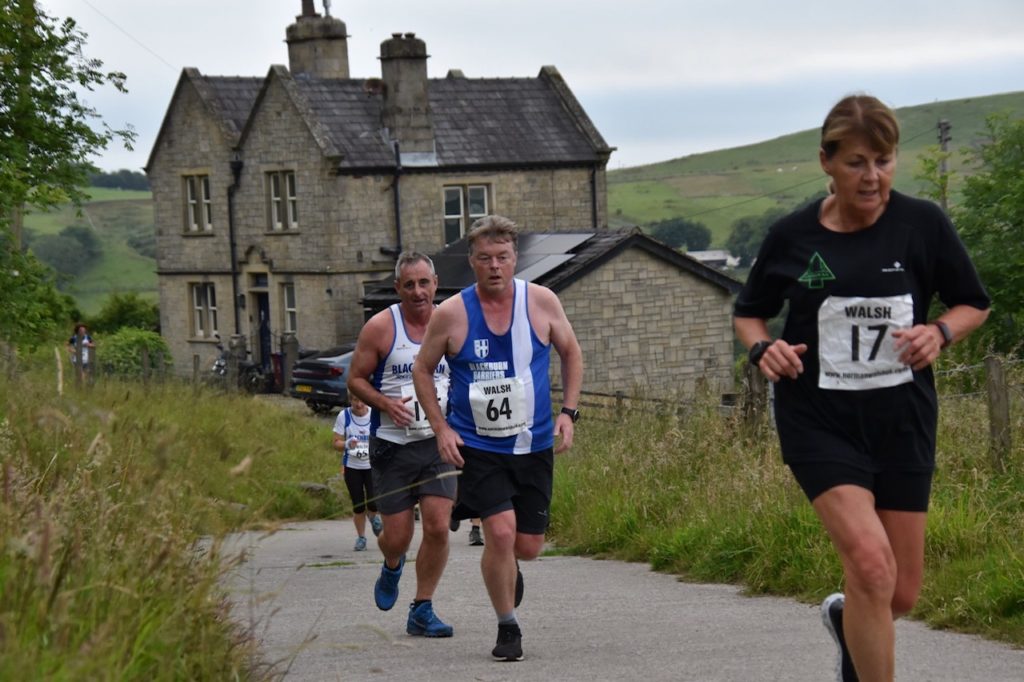 Just twenty fours previous and it was the final race in this years three race Astley Park Trail Race in Chorley with just over a 100 runners in the main race (RESULTS) and 52 in the Junior Race (RESULTS).

In the Junior Race Sam Aspey took 2nd spot to add to his two previous race wins, this time running 4.42 to win the Series overall. Chris Davies placed 4th overall in the Series and 1st vet alongside John Cookson =14th overall and 7th Vet with George Woodburn =26th overall and 1st V70. Amy Davies won the Open Female Race Series , with Lindsay Davies in 9th and Kate Cookson in 12th. In the Junior Female category it was 1st for Amy Davies, 2nd for Hollie Cubbon and 4th for Kate Cookson with Lindsay Davies taking 1st in the Vet 40’s. 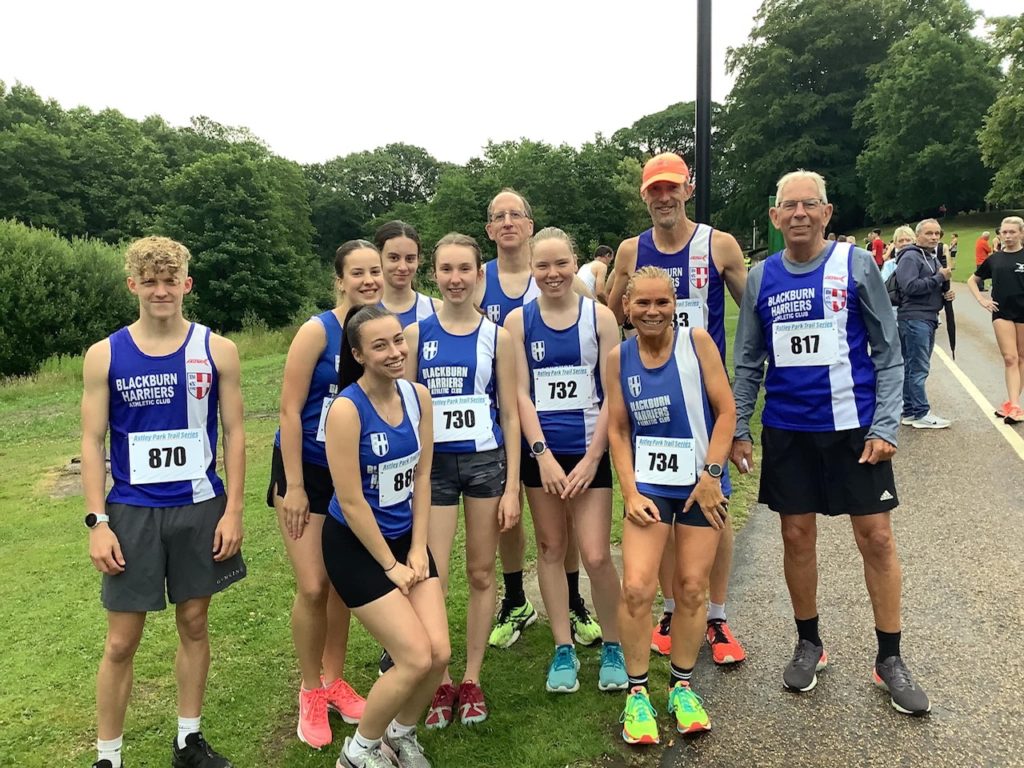 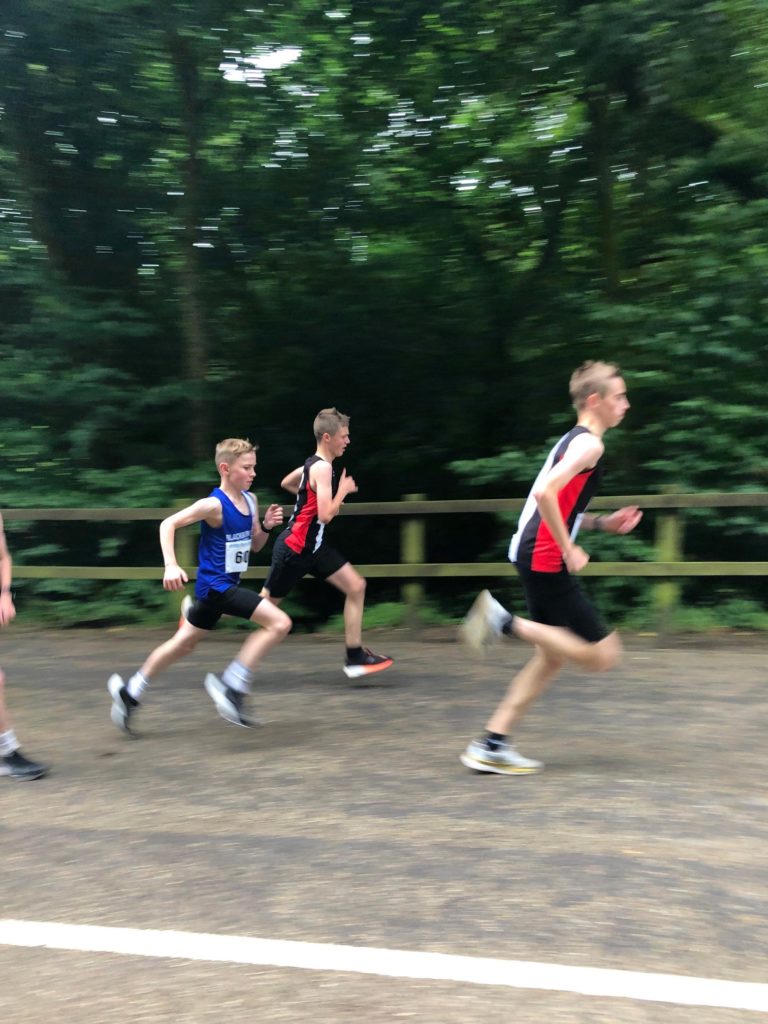