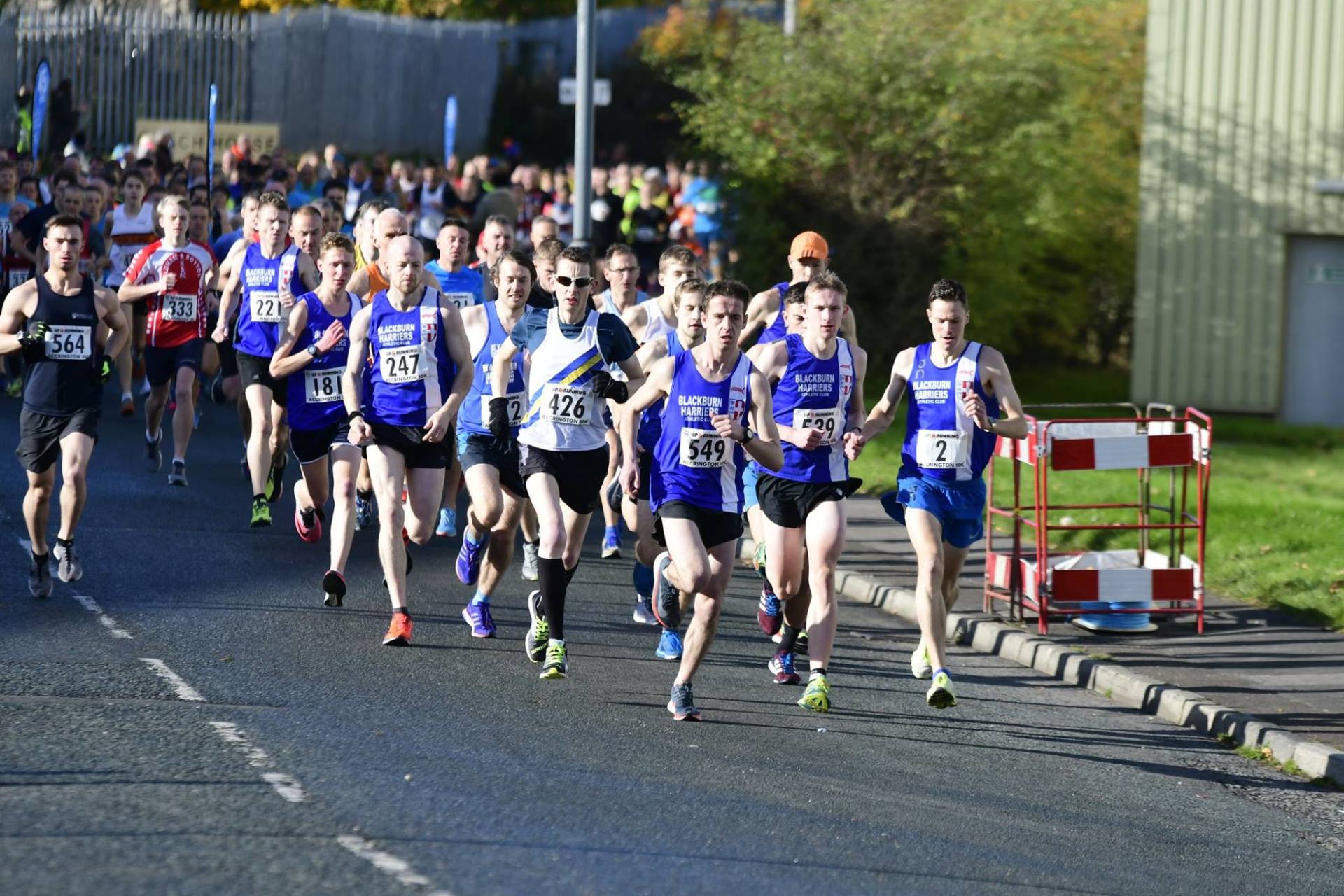 Proving to be popular once again, over five hundred runners completed this local, and quite tough 10k Road Race won by Ben Fish in a excellent time of 31.32 as he led the Harriers to a clean sweep of Individual and Team wins. Taking into account the nature of the course, the time posted here plus those by the other Harriers show them to be in very good form.

Speaking to the Club after the Race Ben told us “What another great result by the club. Like Chris said, people are really starting to notice the progress we’ve made. It’s a really great time to be a Blackburn Harrier. I was happy with my own run, recent form has been poor, so to run that time on this course is a good boost and hopefully I can string together some decent 10k times to end the year on” 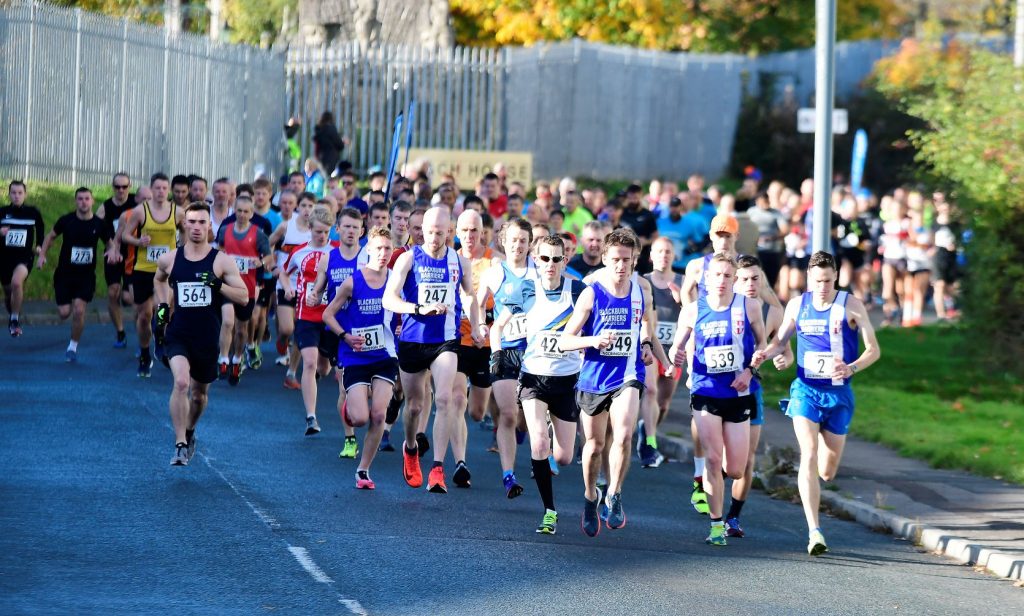 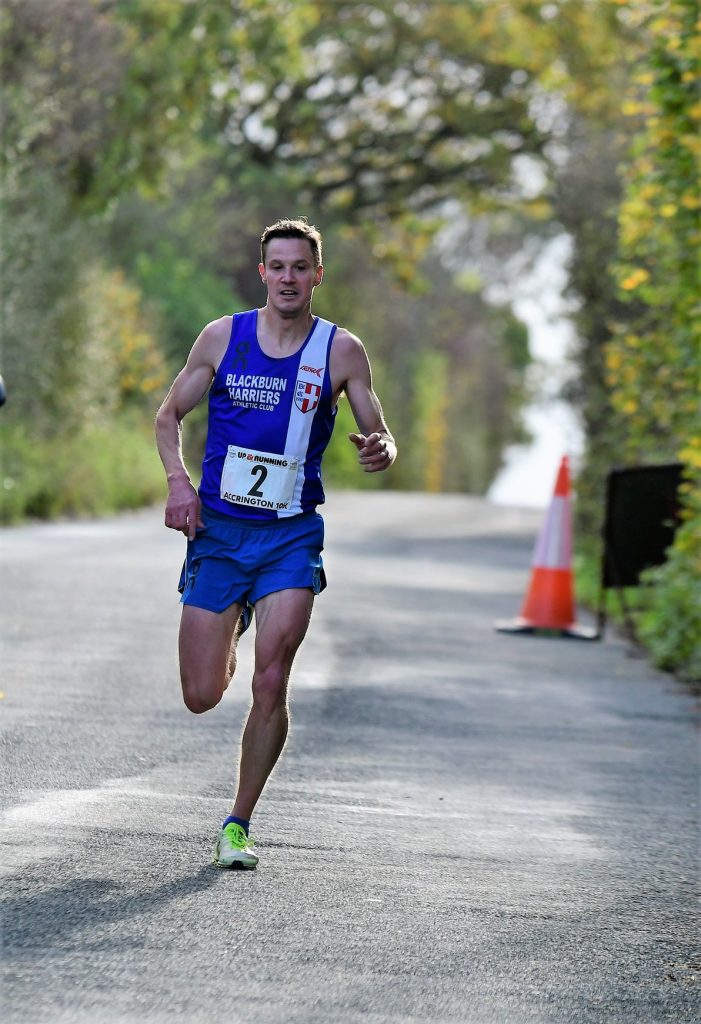 (All photos of the Race courtesy of David Belshaw)

It was a very good day for the Harriers as they took 8 out of the first 12 places. Jack Hindle took second place clocking 33.4, commenting that the day saw “Fantastic Running from everyone today. Really doing the Blue and White proud. From a personal perspective, it was a solid run for me after a hard block. It’s good to see that I am running some good times, with still 2 months till the Ribble Valley 10k. Now to knuckle down and hopefully bring the times down”. 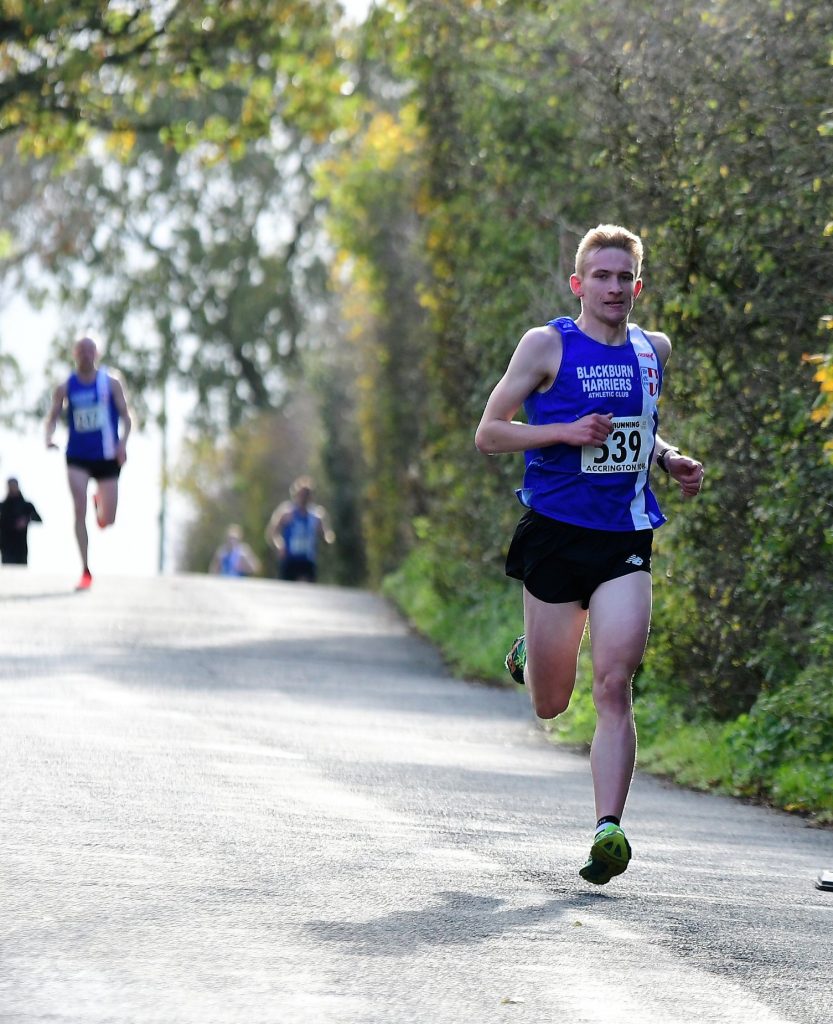 Ben Costello was the next Harrier to cross the finish line in 3rd spot with a time of 33.48 which smashed the time he ran in the race last year. Happily Ben told us that “Going into the race i was hoping to improve on last years time and i did that by over a minute. The conditions where as good as they could be for a 10k. Well done to all the Harriers that ran today absolutely fantastic and a race well dominated”. 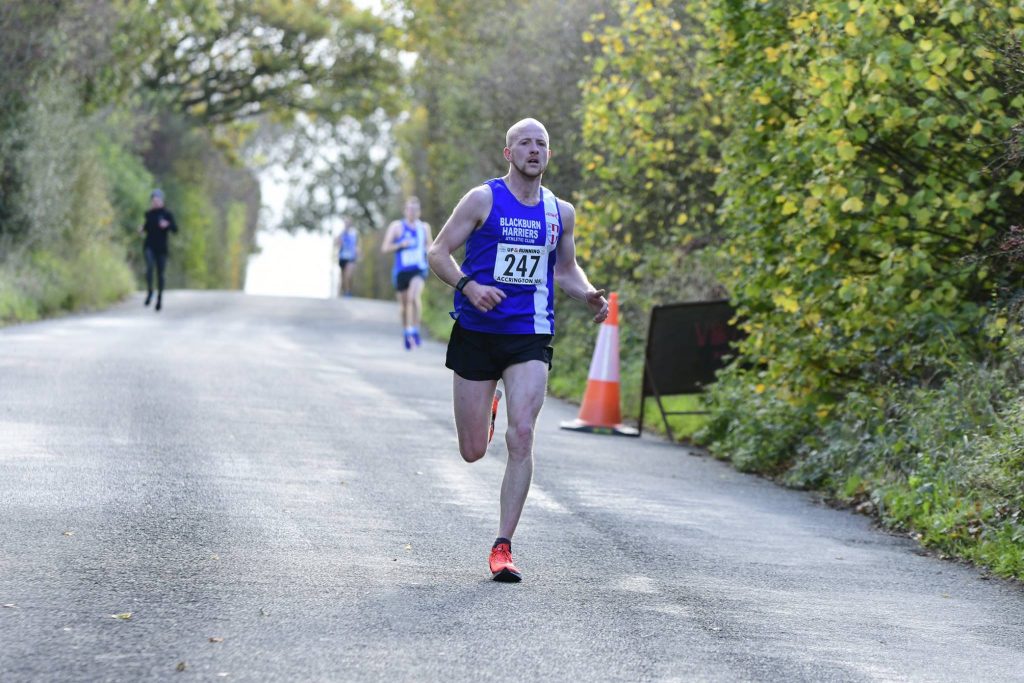 Karl Billington is improving with every race and took 4th place in a good time of 33.57 and saying that it was “Great running for everyone today, showing that we are becoming a dominant force in the county. Enjoyed the race today despite the hills and my fastest 10k in 3 years”. 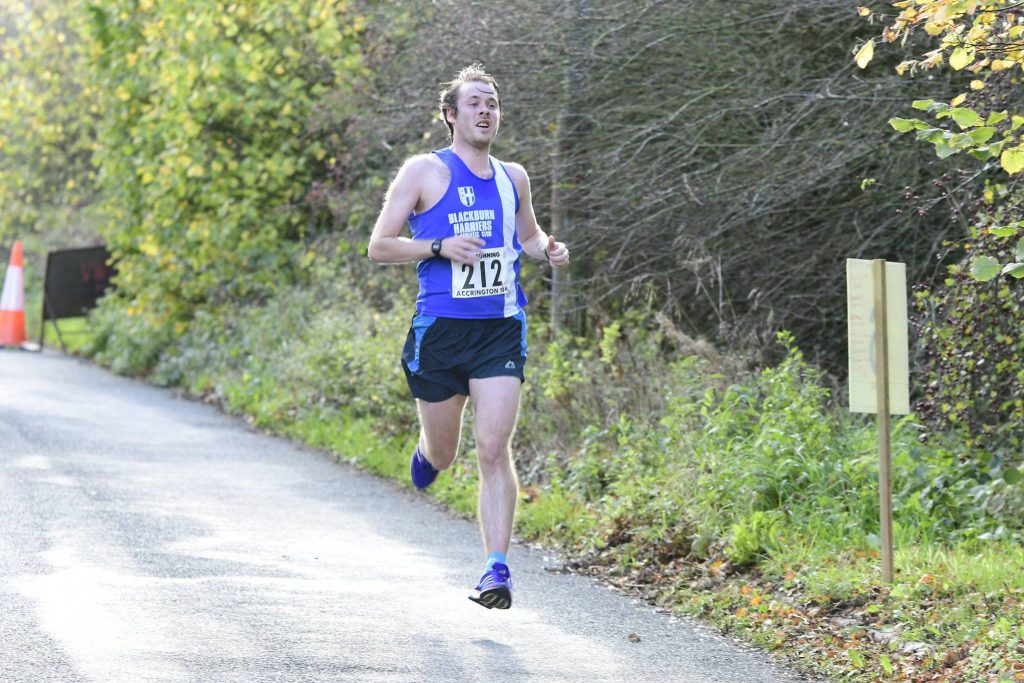 Josh Holgate made it five Harriers in the first five places as he ran really well to take ten seconds off his previous best to set a new PB of 34.06 which means a lot more given the toughness of the course. 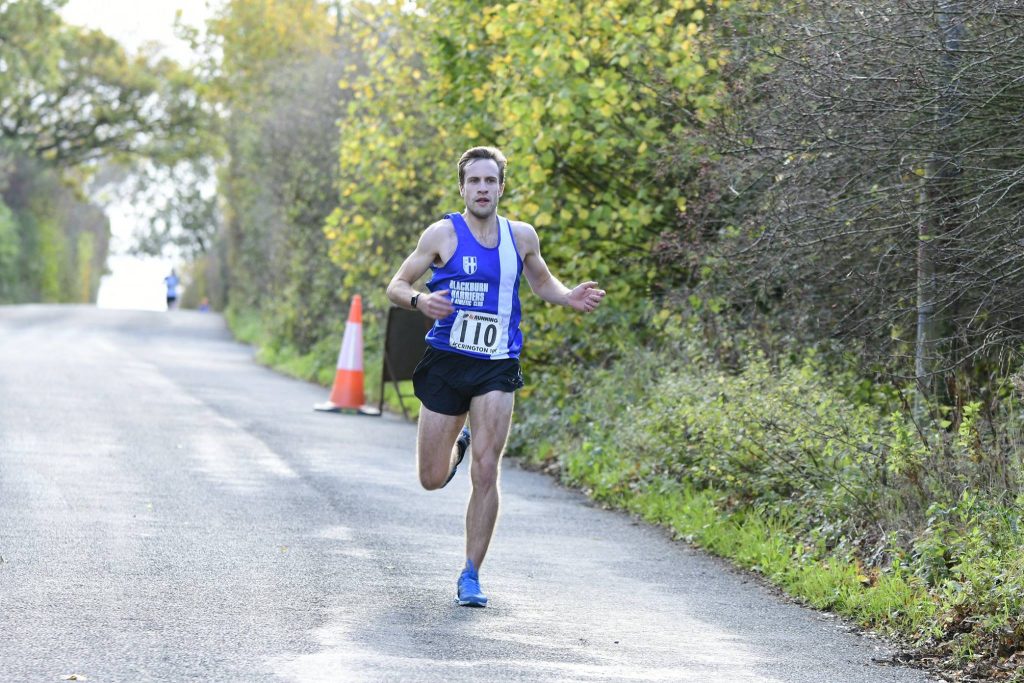 Chris Davies was the next, in 7th position posting a time of 34.44 and was very happy overall with his own and the teams performance on the day commenting “I would like to say well done to all the team, another impressive display from everyone. To get 7 finishes in the Top Ten is fantastic. You can tell out on the course that people are impressed by us at the moment, their is a lot of positive and nice comments coming our way at the moment which is great. On a personal level I was more than happy with my run knocking over a minute off from last year when things weren’t going to well. Also having only done the Manchester Half two weeks ago and still training at a high level I didn’t know how well I would do today. I felt tired after training on Thursday so just eased down a little bit over the last couple of days and it seemed to pay off. Well done again though guys, great team performance and keep up the good work”. 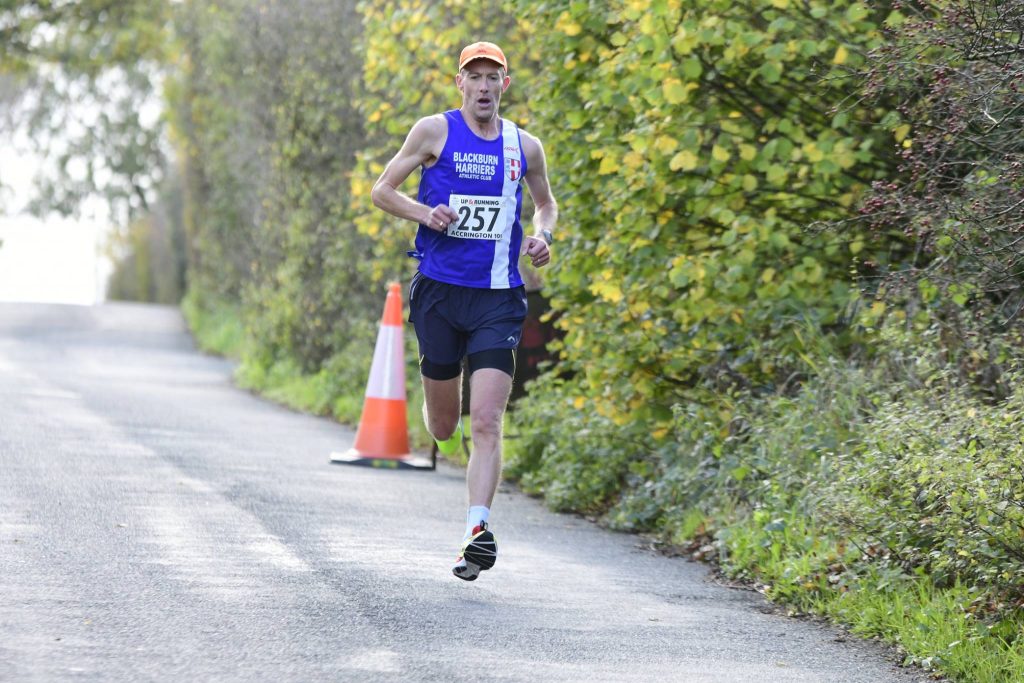 Calum James was making his debut for the Club and had a very good run with a time of 35.45 to finish just one place further back in 8th place to give the Harriers seven out of the first ten places in the Race. Afterwards Calum spoke to the Club saying “This morning at the Accy 10k Blackburn Harriers owned the race finishing best team and I’m happy to have finished within the top ten with overall 8th place spot. I managed to beat last years time ( 38.52 )by three minutes on the same course with (35.45) in the popular blue and white vest, I would like to thank everyone for their massive help and support and a massive well done to everybody who took part” 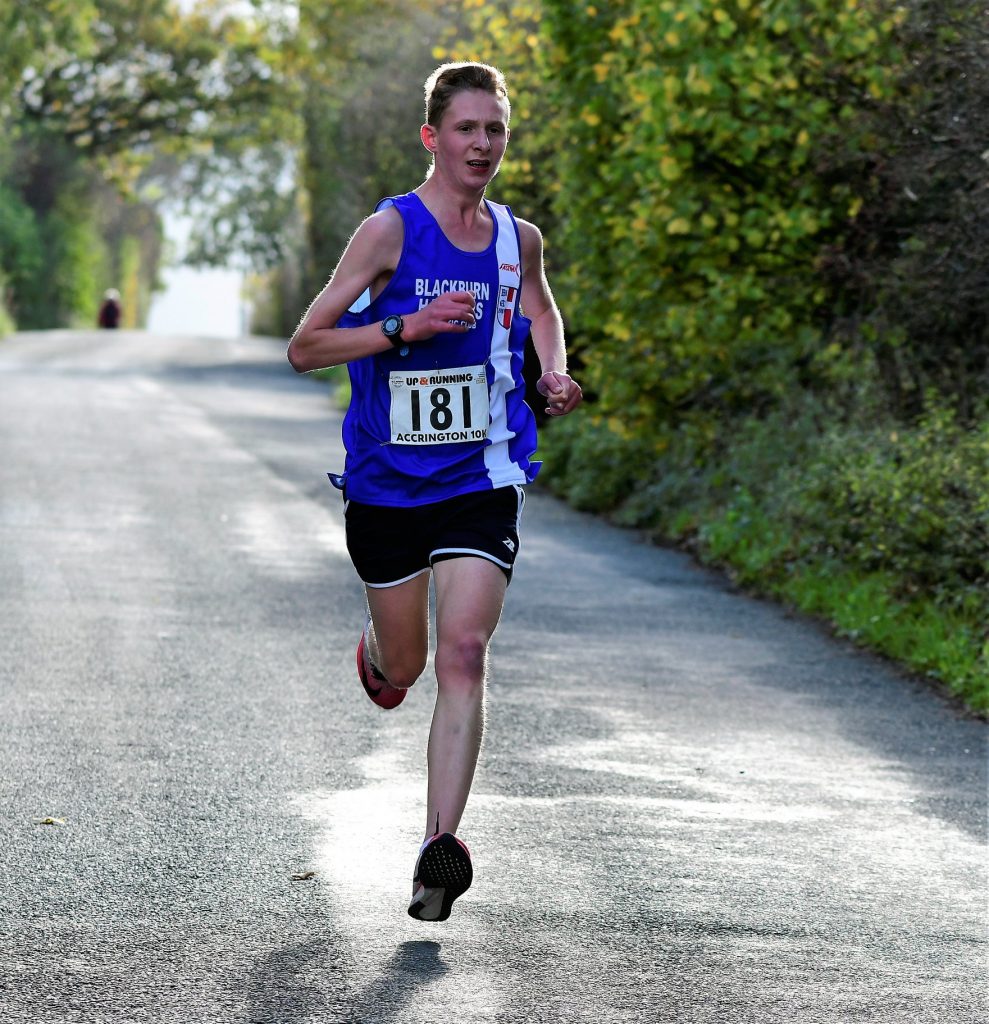 Paul Brindle continued the Club’s very good performances in the Race with another solid run in 12th spot clocking a time of 37.13 which made an impressive eight Blackburn Harriers in the first twelve places. 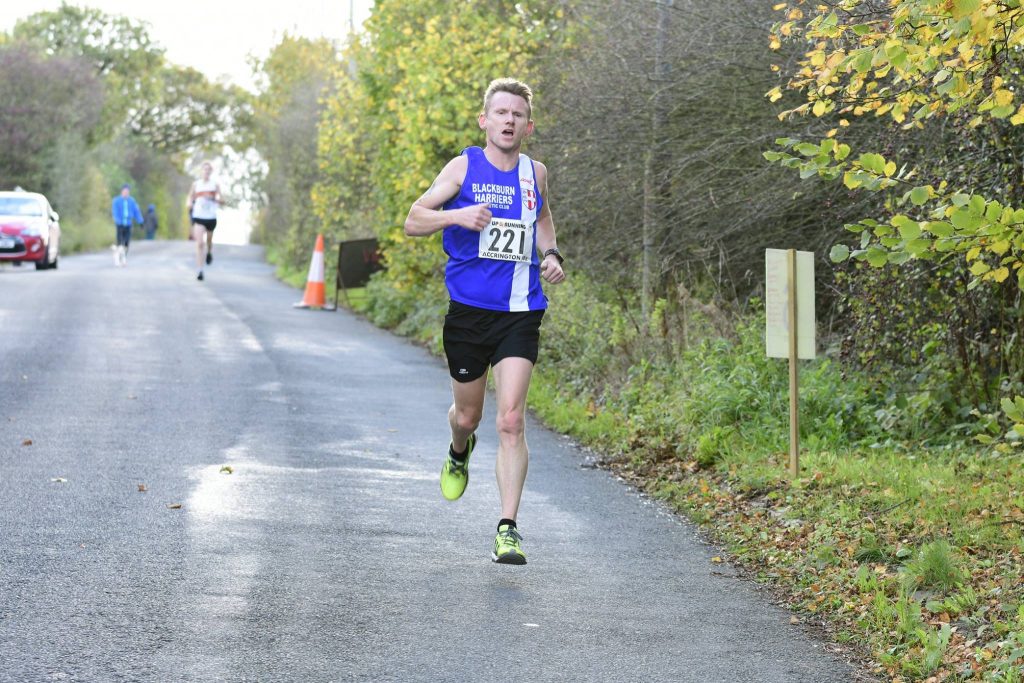 Danny Collinge came home in 47th place with a time of 43.12 and he was followed by Lindsay Davies in 87th position in a time of 46.11 and a new PB by six seconds, which is an even better run on this type of course, and Ryan Walmsley just a place further back – 88th – in 46.16. Lindsay commented after the Race that she “Felt really good in the race today, legs not tired and felt good on the hills, kept in front of the 45 marker most of the way but lost him at mile 4, kept pushing all the way and ended up with a new PB knocking another 6 seconds off. Accrington is a relatively tough course now and found that having my new job at the top of Buncer Lane and running to work helped massively”. 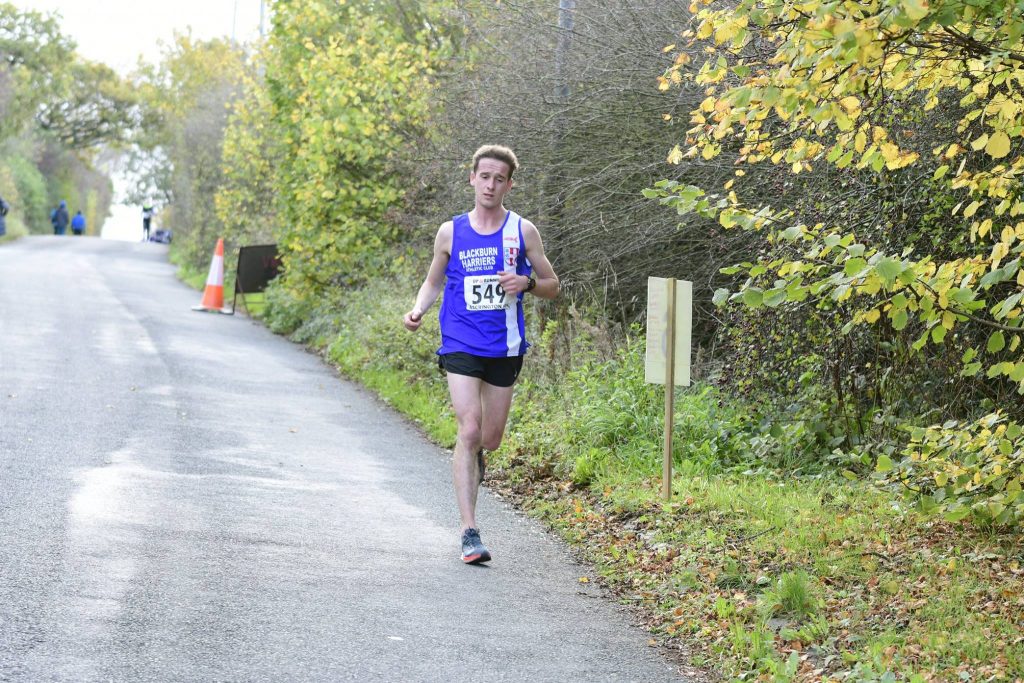 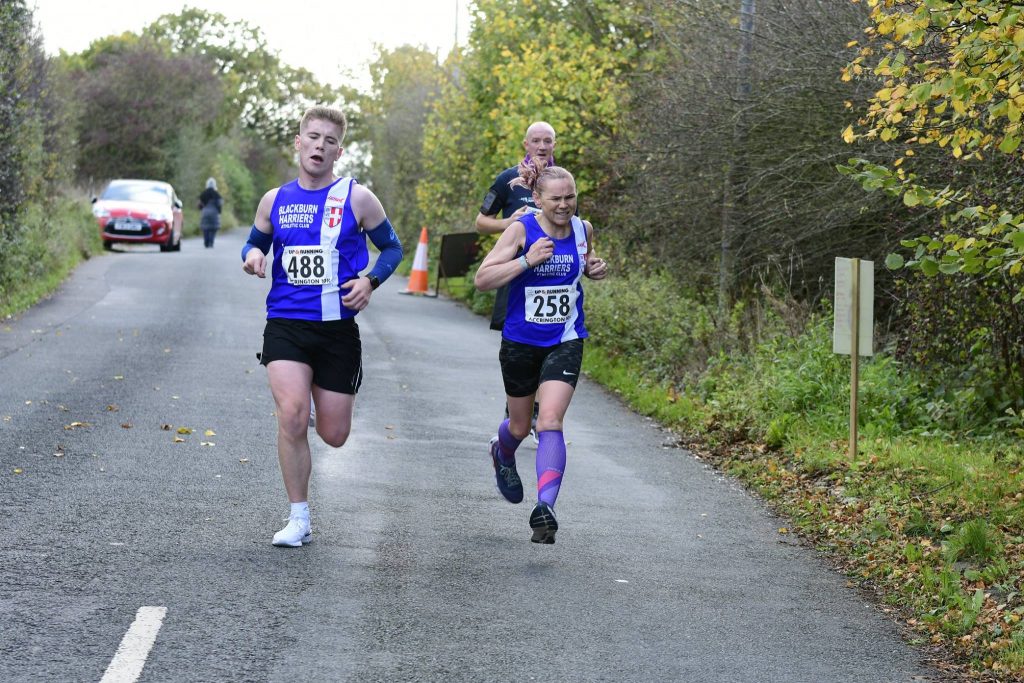 Big congratulations to Rebecca Woodworth who – having been ‘encouraged’ by one of the Clubs Coaches – she had her first ever competitive run for the Harriers after recently starting to take up running; And she made an impressive debut as she came home in 343rd place with a time of 59.34.

There have few unluckier athletes than Samantha McCreadie. ‘Sam’ as she is affectionately known, has managed to put just three races together since running a time of 39.44 – nearly four years ago – at the 2014 Ribble Valley 10k. 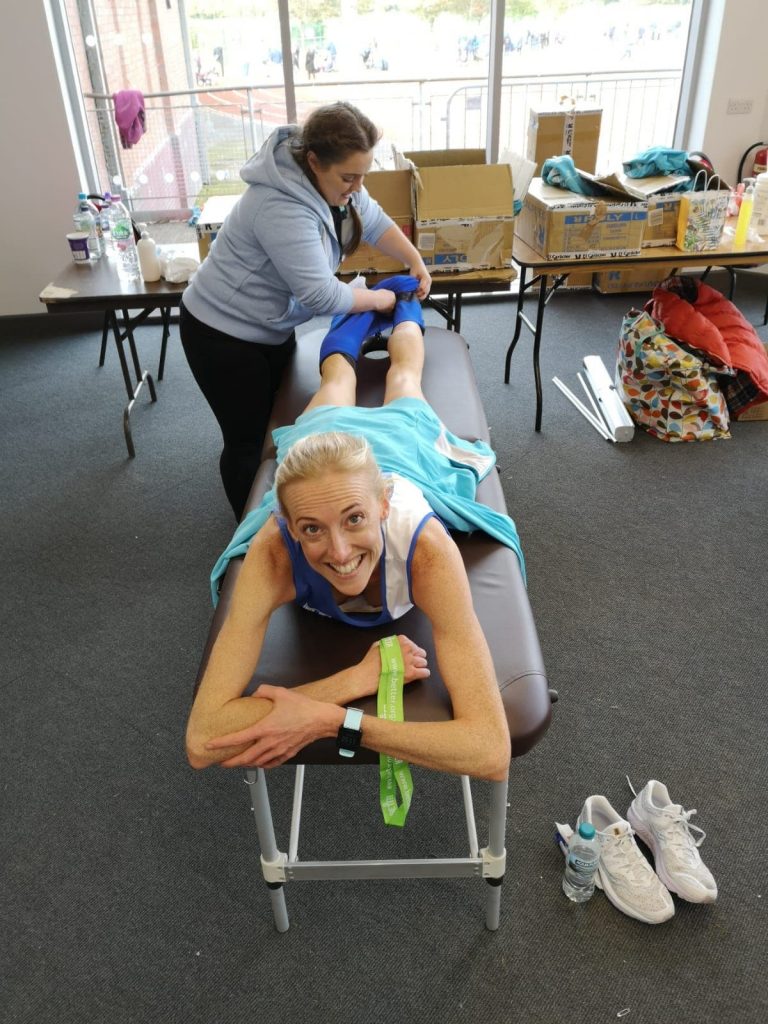 Sam has suffered multiple injuries and she would have been forgiven for ‘calling it a day’ after nearly four years of doctors and physio’s, searching for answers. However, she has battled through it all to make a comeback in this Half-Marathon where she finished 132nd overall and 11th woman in a  time of 98.39 saying it “Was great to be back in a Harriers vest “ and that she was “Just happy I can get out running again and start getting back to racing”. 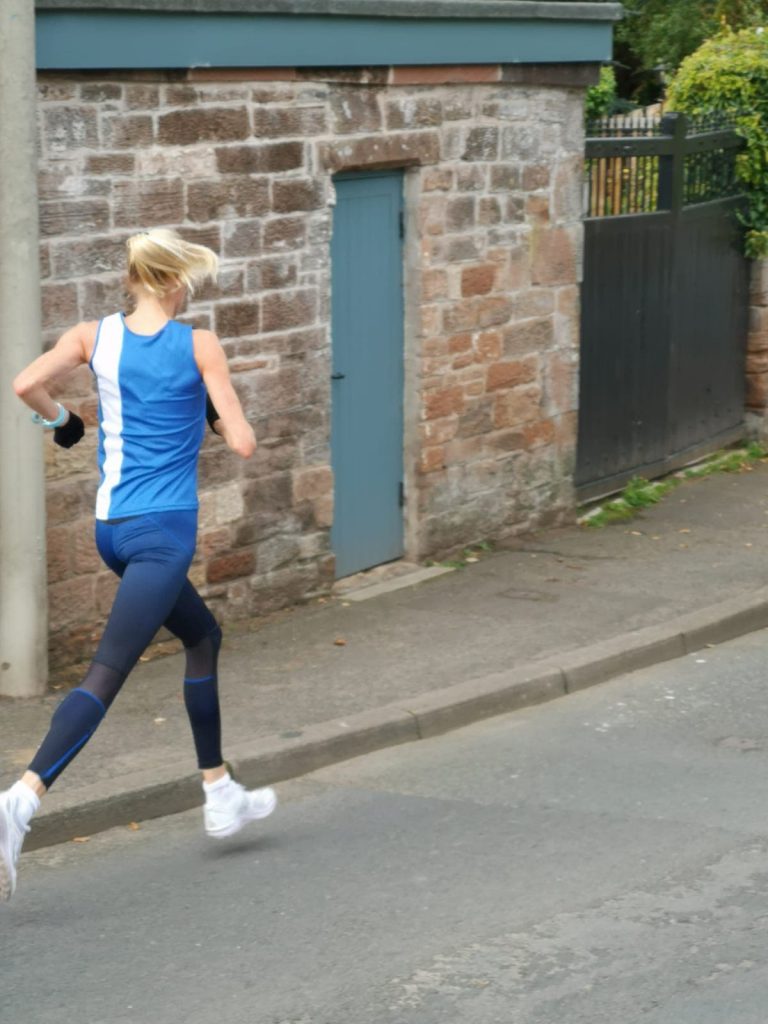