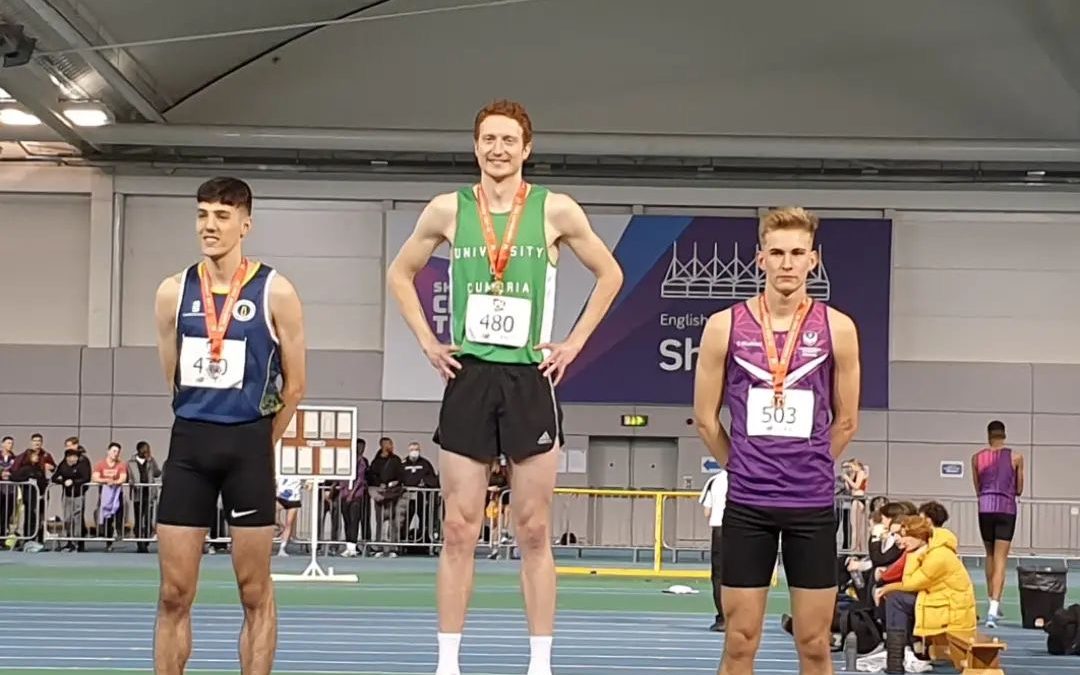 What a weekend for Blackburn Harrier’s Dominic Walton. He was going into the BUCS Track & Field Championships representing the University of Cumbria at the EIS on the back of winning the BMC 800m at Sheffield in January followed by winning the Northern T&F 800m title, also in January, as well as picking up his 2nd England vest in Glasgow. Athletics is never straight forward as he discovered, being ill in the week leading up to BUCS. On Saturday Dominic qualified for the Final on Sunday. Going through 400m in 56.14 he placed himself in 2nd place coming off the bend as the field approached the 600m mark. Going down the back straight he maintained that 2nd spot, closing the gap as he came off the bend, running a superbly judged race to take the title and Gold Medal in the last few metres in a time of 1.51.39 from Dan Howells (Brunel) in 2nd (1.51.55) and David Locke (Loughborough) in 3rd (1.51.67). 800m Final Video
Speaking to the Harriers after the presentation, Dominic told us “I can’t believe it. I was ill all week before the event and considered not even turning up. I ran my Heat on Friday in 2:01 and felt shocking so to come from that to win. Well I have no words. Thank you everyone for the kind messages, it really means a lot!”
Maddie Elliott (Cardiff University), John iLunga (Sheffield University) and Benjamin Whittaker (Edge Hill) were also competing at BUCS – Maddie running in the 1500m, John in the 60m Hurdles and Benjamin in the 4 x 200m Relay. Sadly for Maddie she had suffered with Covid recently, which had impacted on her more than she had expected. After running 4.57 in the 1500m she was upbeat and was looking forward to getting back into training and being in good health. John equaled his personal best in the 60m Hurdles as he ran 11.51 in 5th spot in his Heat.  Ben can be seen running for Edge Hill on Leg 3 in 4 x 200m Relay at 2hr 17.00 on the Video — (Saturday Action Video) The third and final fixture of this years Lancashire Sportshall League resulted in the third win in a row for Blackburn Harriers which meant they became undefeated Champions. On the day our U9/U11 Boys and Girls were joint 1st with our U13/15 Boys and Girls 2nd. Overall in the 3 matches Blackburn Harriers U9 Boys came 1st, U9 Girls 1st, U11 Boys 3rd, U11 Girls 1st, U13 Boys 3rd, U13 Girls 2nd, U15 Boys 2nd, U15 Girls 1st. The Coaches were so pleased with the efforts of the youngsters and told us “Well done to all our Blackburn Harriers Sportshall Athletes, we as coaches are so proud of what you have all achieved. Some have been with us a while and some only a few weeks but you all gave the competition 100 % and enjoyed every minute too. You were all a credit to us and were very well behaved over all the competitions.” 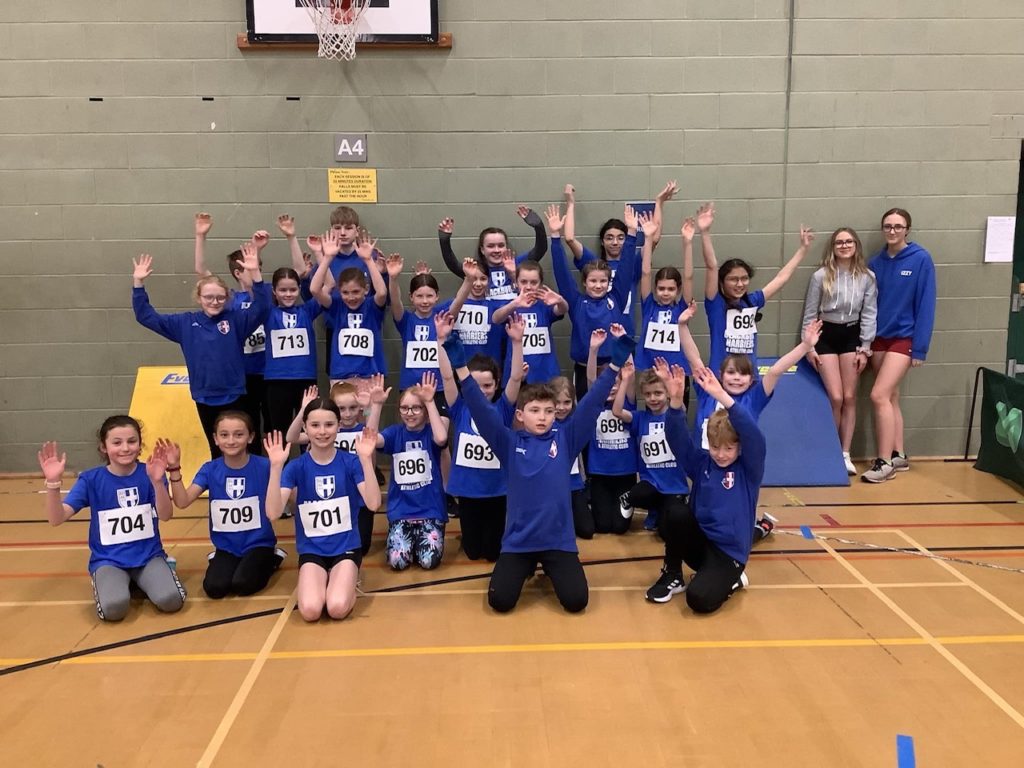 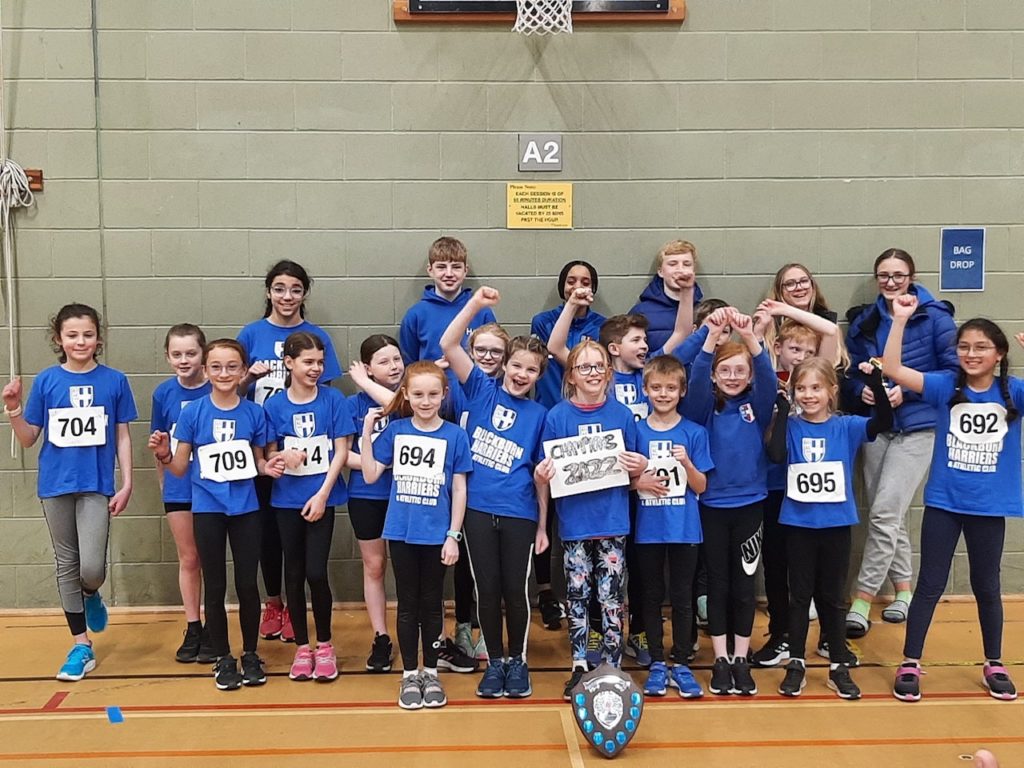 Athlete of the Match (Elliott Butler) Paul Bradshaw was out for only his third race since March 2020 during the week. Having run in the West Midlands Cross Country League in January he followed that up with a trip out in the Winter Warmer 10k in Blackburn on February 6th where he ran a solid time of 38.10 in not the best of conditions given the wind. So last last week he encountered the wind again – some 40mph – as he tackled a 5k in Derby where he ran a time of 17.24 in 13th place.