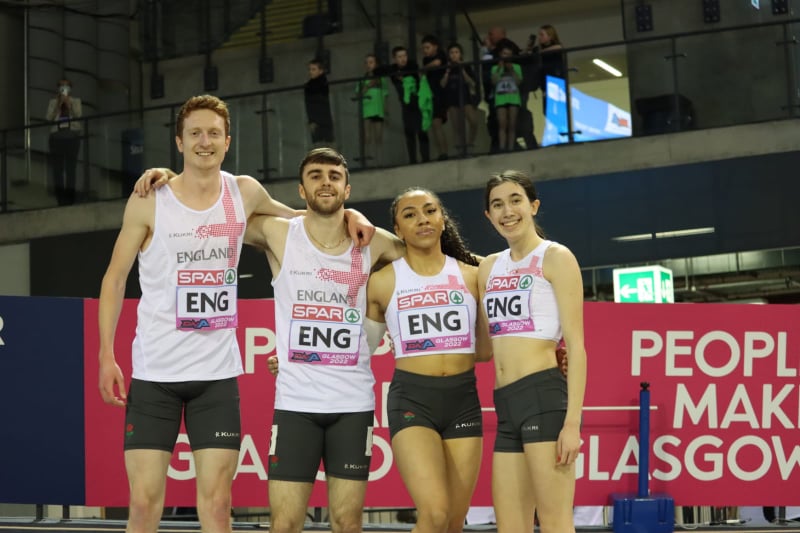 Although originally held in 2019, Dynamic New Athletics as a concept for an Indoor Meeting took centre stage in Britain for the first time at the Emirates Arena in Glasgow at the weekend. It is designed to be done and dusted over two hours and be fast moving. As to how successful it may turn out to be will of course be seen over a period of time. Congratulations to Blackburn Harriers Dominic Walton who won his second England Vest after being selected to run the 600m in the Hunt which was a mixed team of 2 male and 2 female athletes. The England team came home in 2nd spot with a combined total time of 4.40.88 behind the winners – Spain – with their time of 4.38.46.

The Hunt Race Video (with Dominic on 2nd Leg

Dominic spoke to the Harriers about his experience in Glasgow telling us that “Going into the event I wasn’t expecting much because it seemed like a bit of a gimmick and the concept seemed weird but I loved every second, worked hard and managed to help Team England secure second overall on the day. The England team worked really hard to get the Hunt team in the best position possible and our main rivals for the race were Ireland which luckily I managed to help pull a gap from. Brilliant weekend and can’t wait to race for England again hopefully soon 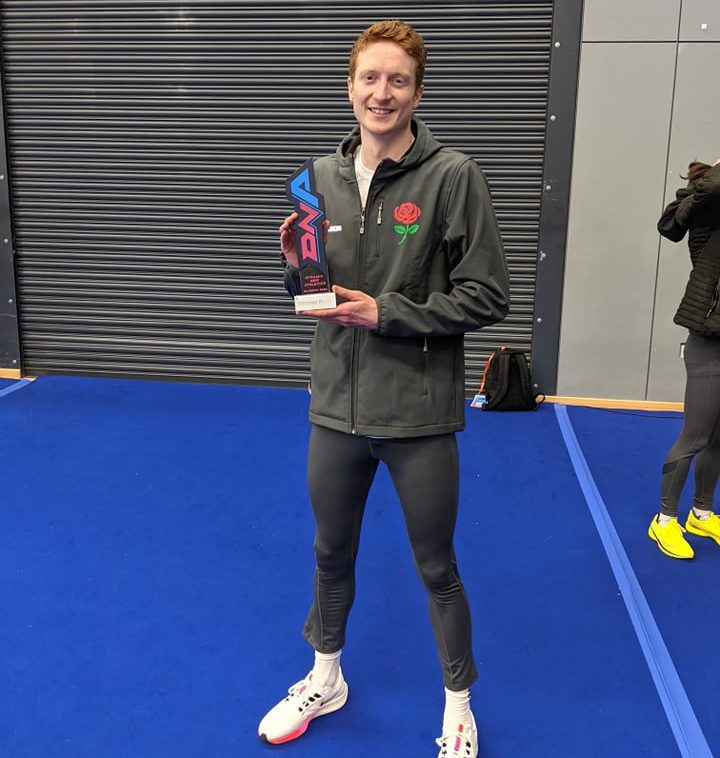 What a stunning debut from Blackburn Harriers bottom of age U13 Jack Baranowski. In the 800m Northern Championships Indoor Finals. He rocketed straight to the top of the National Rankings by winning the Gold Medal in a time of 2.15.95. This young lad has never tasted defeat. In August 2021 he won the 600m at a Trafford Open in 1.41.81 (U11), In October 2021 he won the Red Rose XC Fixture at Leigh, In November 2021 he won the U11 Race at the Liverpool Cross Challenge Fixture and followed that up by winning the Lancashire Cross Country U11 Championships. 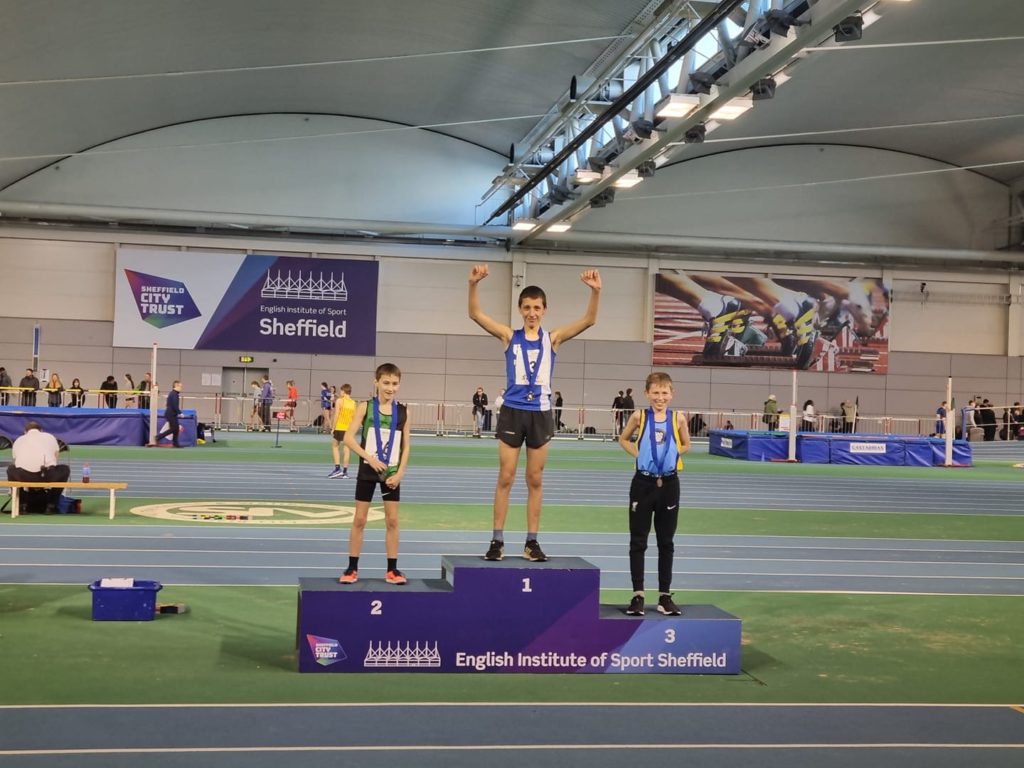 Fabulous performances too from other Blackburn Harriers at the Championships. U15’s Daniel Nuttall, Jacob Fisher and Millee Schofield were all in action. Daniel opened up by winning his Heat of the 60m in a new PB of 7.40 as Jacob won his Heat in a new PB of 7.76 with Millee placing 2nd in her Heat in 8.24 she then went onto clock 8.25 in 2nd place in the semi-final and qualify for the Final. 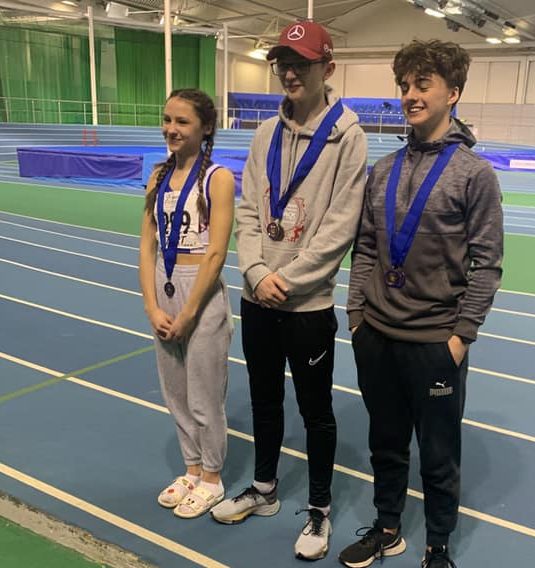 Daniel and Jacob both qualified for the Final of the 60m and what runs they had as Daniel took Gold and the Northern Title with another new PB of 7.37 Jacob taking Bronze in a time of 7.77. Daniel and Jacob then replicated their 60m Final form in the 200m which saw Daniel make it a double Gold and double Northern Champion as he won the Final in 23.78 with Jacob making it a double Bronze with his time of 25.20. Millee lined up in the Final of the U15 Girls 200m and added to the medals the Harriers had won on the day with another cracking run of 26.96 to take the Bronze medal. The Final of the U15 Girls 60m saw Millee finish in sixth spot clocking 8.30 to round off a wonderful day for her. With the mixture of Heats, Semi-Finals and Finals all taking place on the same day and the pressure of all of that, everyone of the athletes can be proud of themselves and the way they represented themselves and the Harriers. Six hundred and seventy two runners braved the wind and rain at this years Winter Warmer 10k along with another one hundred and twenty six youngsters who took part in the Junior 2k Run.

Eleven Blackburn Harriers joined the Open Race and six young Blackburn Harriers ran in the Junior 2k Race. Ben Fish won the race in a pretty fast time given the conditions on the day, clocking 32.12 with team-mate Luke Betts behind him in 2nd spot with a time of 32.37. Following the Race Ben told the Club that it was  “Really good battle amongst the three of us. Managed to open a slight lead around halfway. Had to keep going well as Luke was finishing strong and had a great run”. Chris Walton made it three in the first ten for the Club as he crossed the line in 10th place (36.45) with V45 Chris Davies just two places further back in 12th – running 37.06 which won him the 1st V45 Prize. Great to see Paul Bradshaw back from injury issues as he ran only his second race since March 2020, coming home in 19th position with a time of 38.10. First Male Junior home was Blackburn Harriers Daniel Smith – aged 15 – who took the Prize as he crossed the finishing line in 21st place with a time of 38.19. David Almond (V55) then made it seven Blackburn Harriers home in the first twenty five places as he finished in 25th with a time of 38.55 which also won him the V55 1st Prize – the Harriers 4th Prize of the day. First Female Junior of the Race was Amy Davies who came home in 129th position, running 45.53 to win the 1st Prize in her age group with team-mate Molly Nicholls not far behind in 136th – and 2nd Female Junior – in a time of 46.13. V45 Janine Fallon finished in 170th spot running 47.36 followed home by V45 Lindsay Davies in 215th in a time of 49.12. 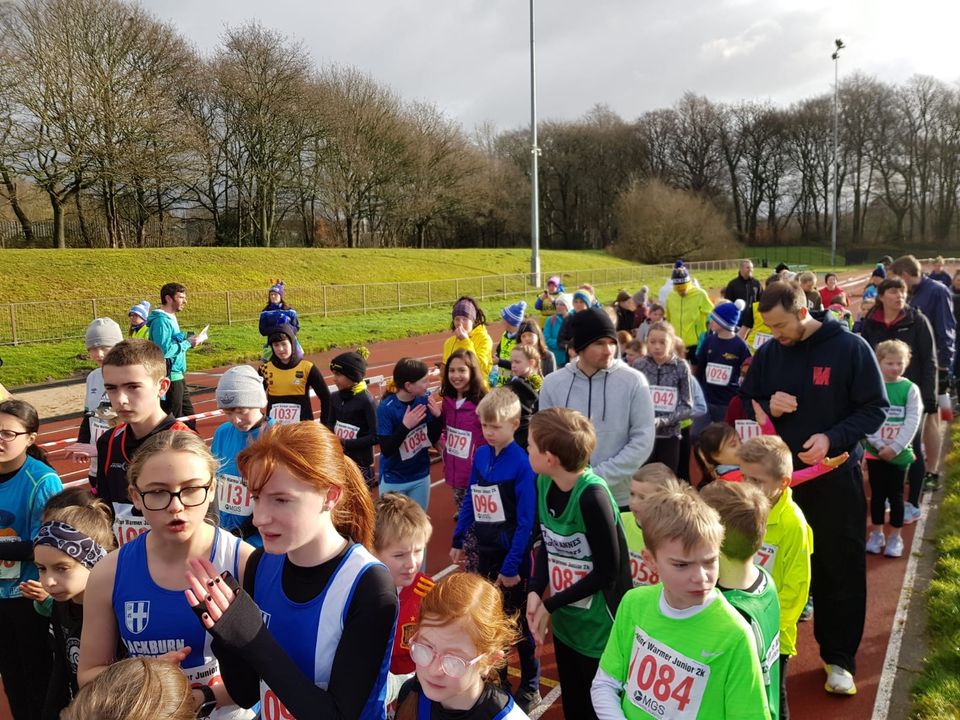 Juniors at the start of the 2k Run

Cross Country weather conditions have been as bad as they get over the last two weeks for the athletes. Firstly at Pontefract in the Northern Championships with unbelievably strong winds and then again a week later at the Lancashire Schools Cross Country Championships at Witton Park – held in incessant wind and rain conditions.

All credit to the athletes from Blackburn Harriers as at least seven look as though they have landed qualifying places at the English Schools Cross Country Championships. The Senior Boys race was pretty stacked with the Silver Medalist at the U20 Northern Cross Country Championships from Pontefract – Rhys Ashton – winning the race in a time of 23.19 from Jacob Deacon – winner of the U17 Gold Medal at the Northern Championships – with his time of 23.34 and Se Loughlin in 3rd (24.36). David Holman (Blackburn Schools) had a cracking run to make sure that he qualified for English Schools by taking 4th spot in a time of 24.51. The Senior Girls Race proved to be a great victory for Abigail Stratton (Burnley Schools) as she booked her place at the English Schools by winning the race in a time of 15.16 from South Ribble’s Gabrielle Hodson in 2nd (15.34). Eleanor Allsop ran for Blackburn Schools and placed 9th overall in 21.45. 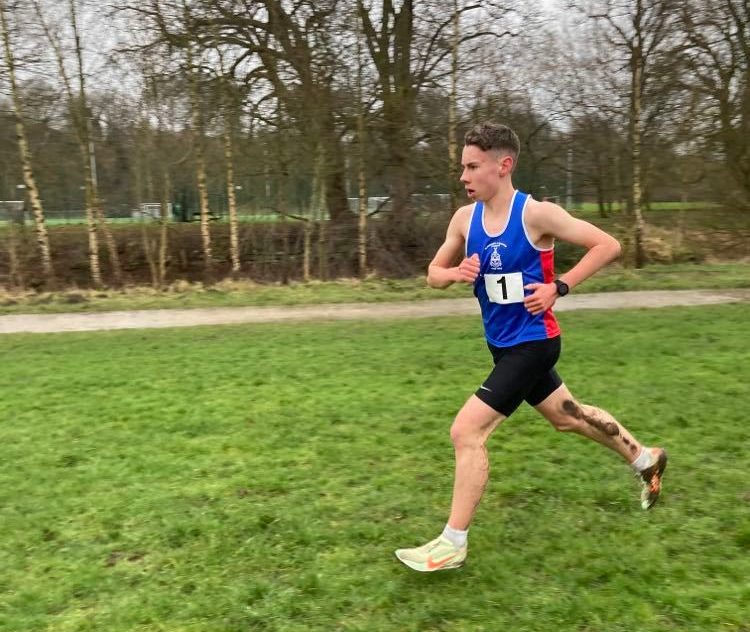 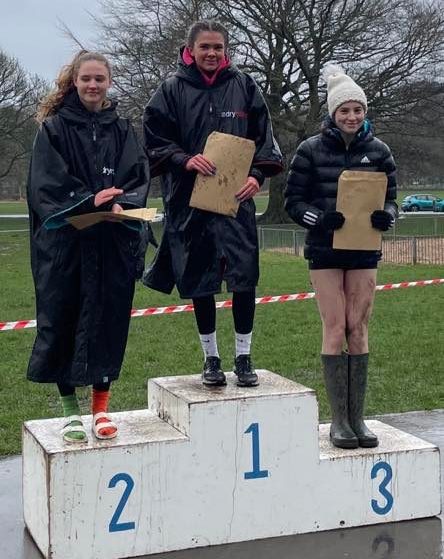 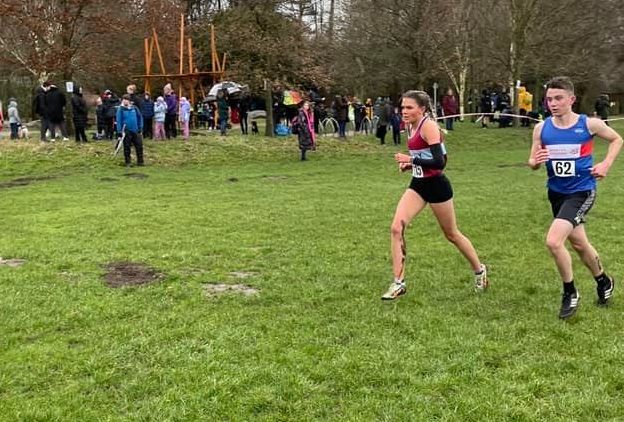 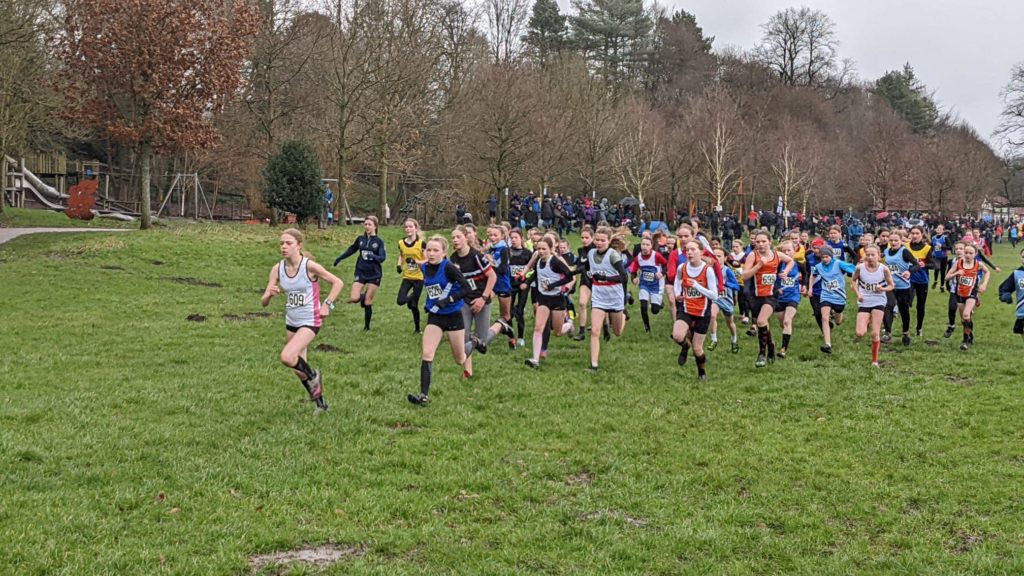 Agatha Taylor leads them out (609) 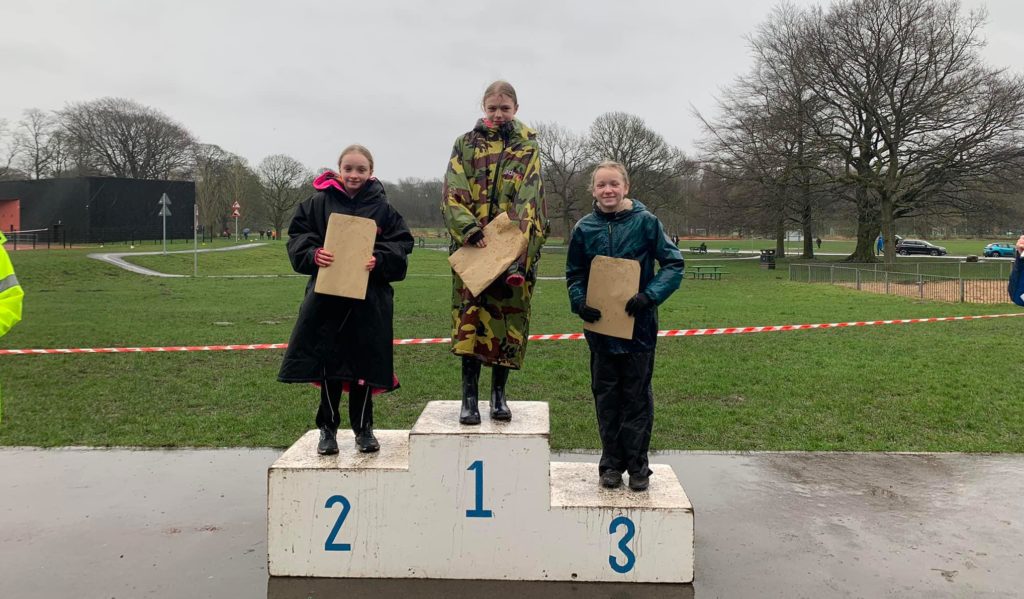 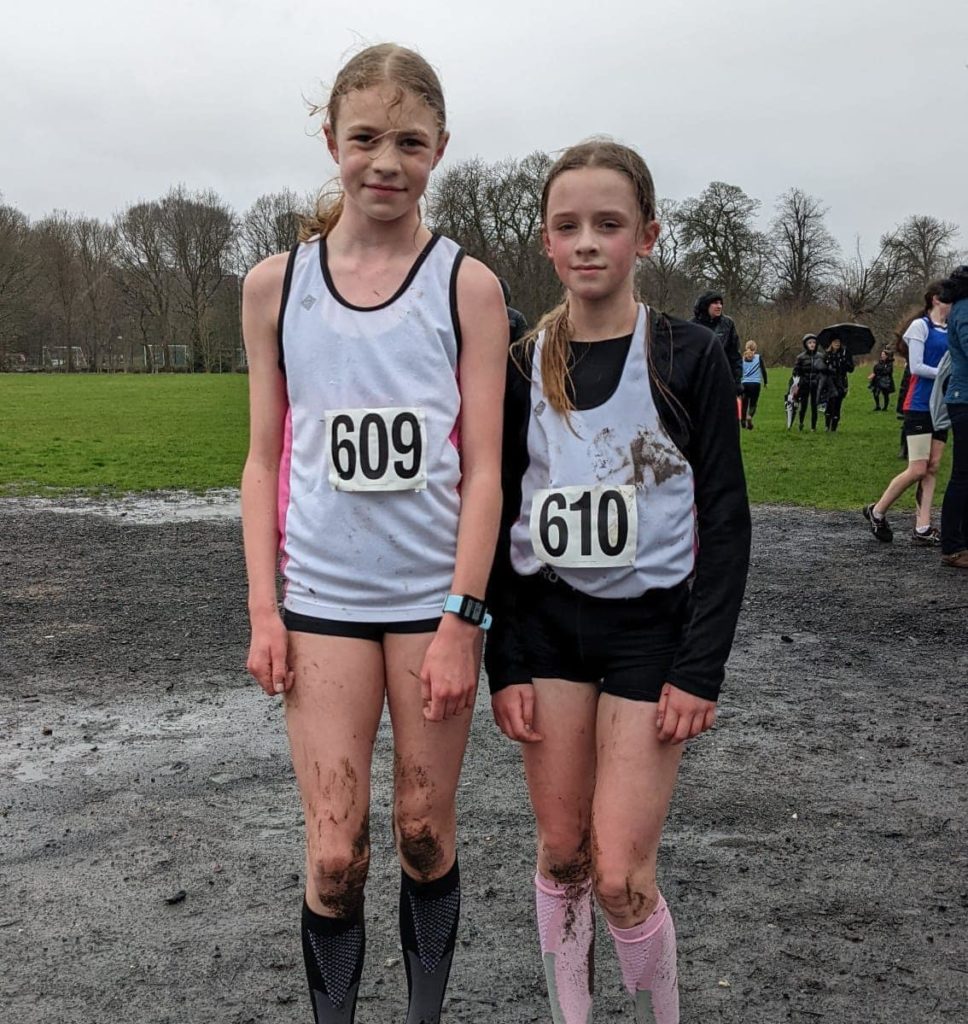 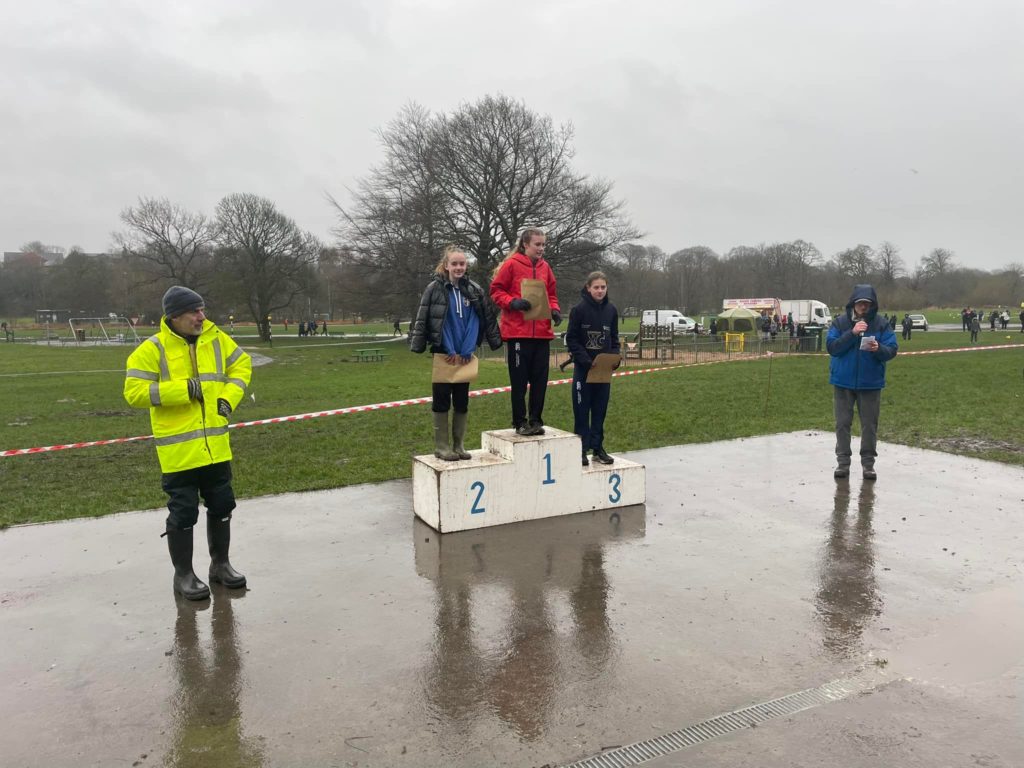 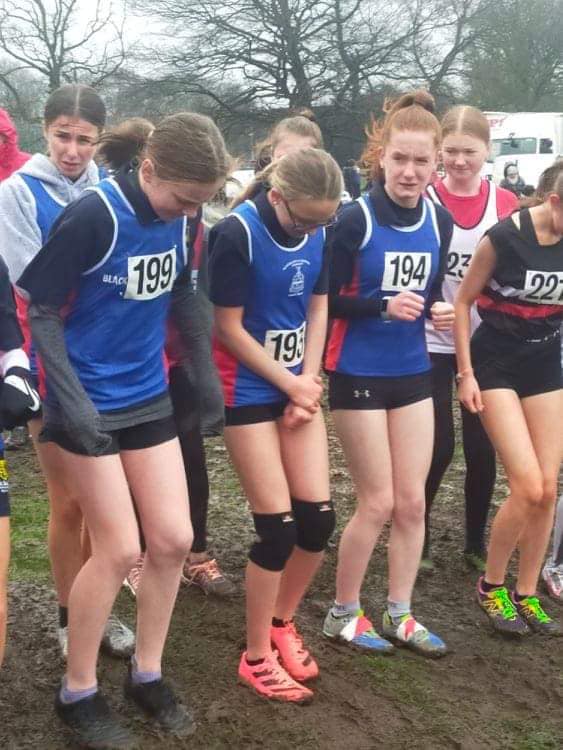 The Inter-Girls Race saw Isabel Holt (Pendle Schools) make it the third win of the day for Blackburn Harriers female athletes as she won the race in a time of 16.12 to book her qualification place with Pendle Schools Eve Hartley in 2nd (16.34). Keira Haxton (Hyndburn Schools) came home in 17th position running 18.11 with Eva Knowles (Blackburn Schools) in 30th (19.24), Kate Cookson (Fylde Schools) 36th with a time of 19.49, Keira Booth (Chorley Schools) 39th in 20.28, Sprinters Kara Dacosta and Niamh Gater both running for Blackburn Scools in 48th (21.37) and 49th (21.52) respectively.

Final race of the day was the Junior Boys with an assembled field of sixty three young athletes. Sam Aspey (South Ribble Schools) and Oliver Gill (Hyndburn Schools) both booked their places at English Schools as they came home in 4th and 5th places with times of 15.38 and 15.48 respectively. Multi-Eventer Matthew Smith (Hyndburn Schools) ran a time of 16.59 in 19th spot with George Ramsden ((Blackburn Schools) finishing in 17.53 (33rd) and Callum Singleton (Pendle Schools) placing 43rd in 18.29. 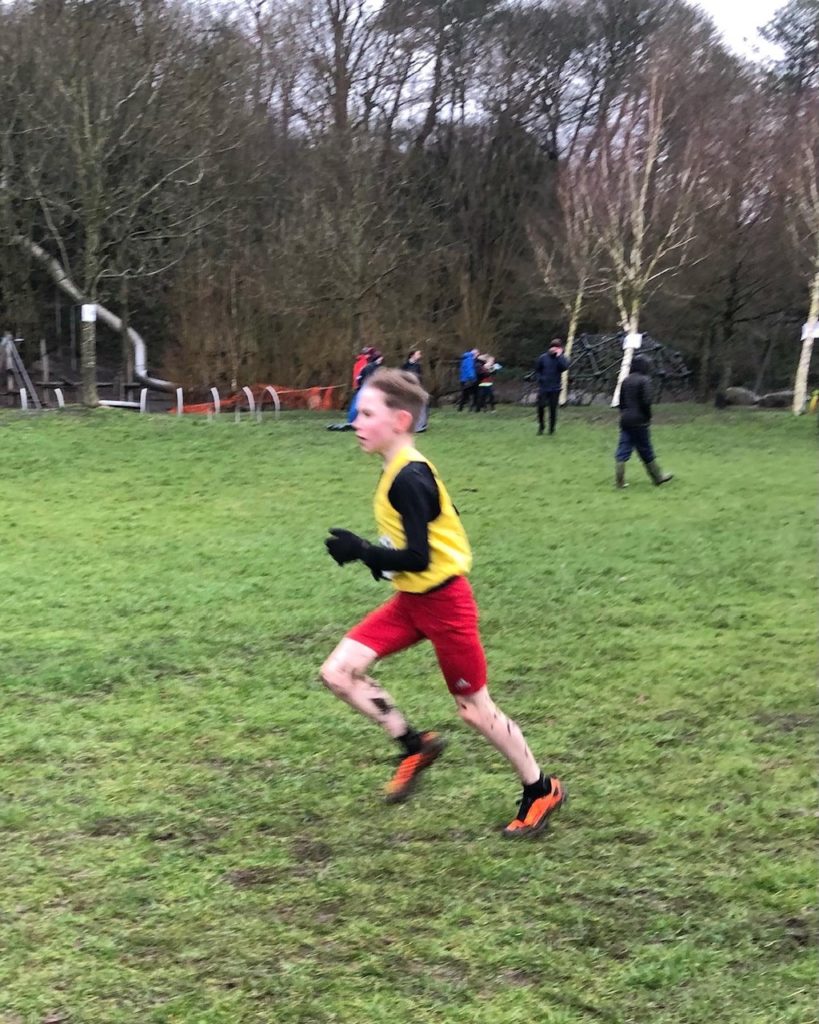