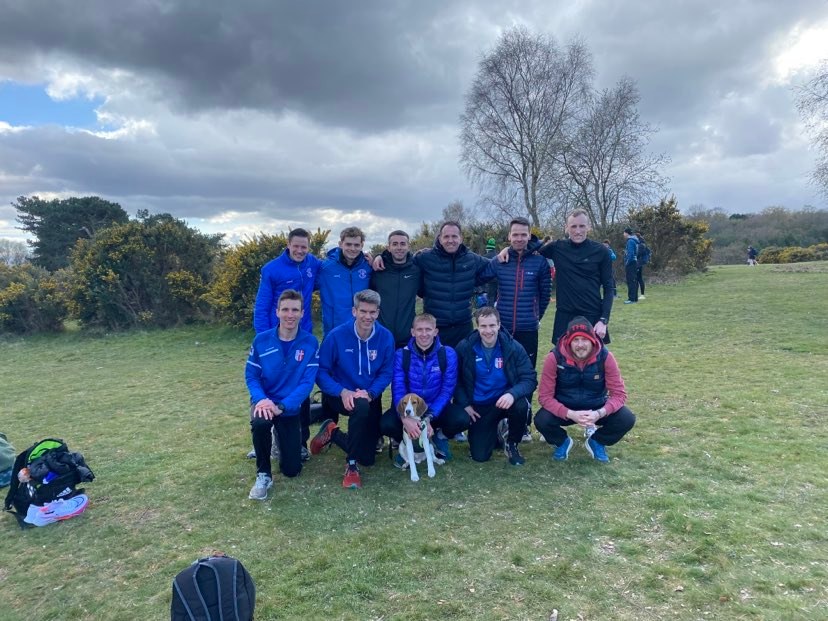 Blackburn Harriers Senior Men’s Team had qualified for the National 12 Stage Road Relays held at its traditional venue – Sutton Park – on Saturday April 9th after finishing 4th in the Northern 12 Stage just two weeks ago and a close eighteen seconds away froma Podium finish. The last time the Championships were held was in 2019 when the Club finished in 21st spot with a combined time of 4hrs 31.51 which had Tim Raynes running the fastest long leg (27.08) and Marc Hartley the fastest short leg (16.09) for the Club.

Comprising six long legs and six short legs, starting with long and alternating through the twelve stages, the Harriers ran a combined time of 4hrs 24.03, knocking nearly eight minutes of the time they ran last time the championhips were held and improved 5 places to finish in 16th overall. Callum Davidson on Leg 5 ran the fastest long stage of the day for the Club in 26.24 whilst Josh Birmingham, making his debut for the Harriers ran the fastest short stage with his 15.57. Out of the 364 long stage runners Callum placed 26th fastest of the day whilst Josh took 47th fastest short leg out of 358 runners.

Starting off for the Club on Leg 1 was Tim Raynes who ran faster than in 2019 to bring the team home in 22nd. Dominic Walton clocked 16.33 to keep the team in 23rd which was consolidated by Luke Betts on Leg 3 with his 27.31. Making his debut for the Harriers on the next stage – Leg 4 – Josh Birmingham pulled another place back with his time of 15.57 to hand over to Callum Davidson on Leg 5. Callum, as he commented “left it all out there” pulled the team up into 13th place with his time of 26.24 handing over to Jacob Watson on the next stage who ran 16.55 to see the team in 17th position at that point. On Leg 7, Nick McCormick grabbed another four places for the team as he handed over to Joe Bridge after running 27.06 for his long leg. Joe posted a time of 17.41 followed by Jack Hindle running 28.17 to see the team going into Leg 10 in 17th place. Josh Holgate took over from Jack and kept us in 17th with his time of 16.37. Ben Fish had a great run on Leg 11 with his 26.54 which was forty four seconds faster than his run, the last time in 2019 which meant that we were back in 15th place handing over on the final stage to Stephen Walter who ran 17.12 to see the team finally place 16th on the day.

Fixture one of the new season for the Mid Lancs League took place on a reasonable day at Witton Park Arena, punctuated by the odd spot of rain and on one occassion, hail. However, some sunshine helped, but a tasty wind at times made it a test for the athletes. 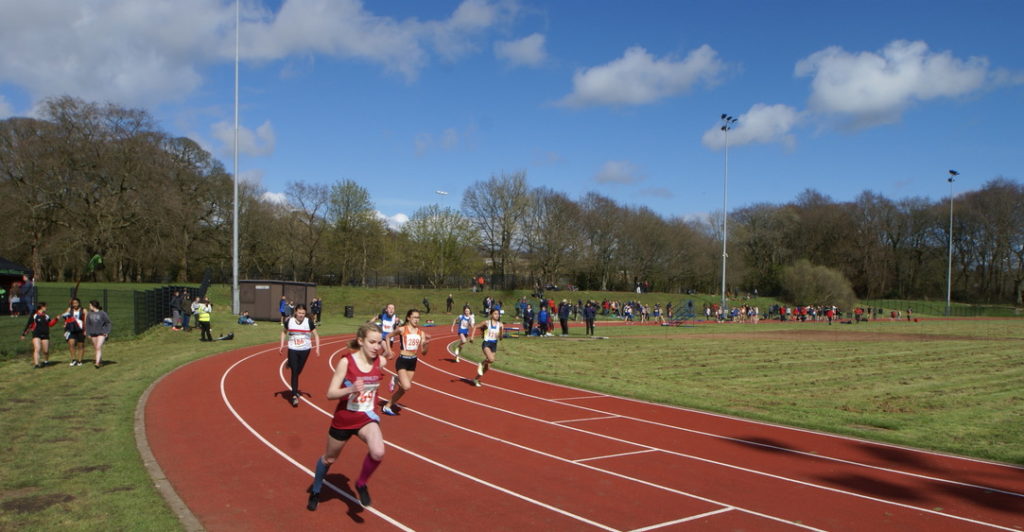 In the sprints it was another very fine performance by U15 Daniel Nuttall who clocked a new PB by two tenths in a time of 11.8 which puts him at No. 2 in the National Rankings. Jacob Fisher in the same Heat clocked 12.4 in 3rd place. In the Senior Women’s 100m it was a 1/2 for the Harriers as Amy Wiggans opened her season with a 13.7 clocking to win alongside team mate multi-eventer Poppy Preece in 2nd who ran 14.0 which equaled her personal best. In Heat 1 of the U13 Girls 100m Leila Pilkington clocked 14.7 in 2nd place with Holly Moore running her first ever race for the Harriers placing 7th in a time of 16.6.  Dana Juma ran her first race for the Harriers in Heat 2 and clocked 16.5 (5th) which was a good start for her. U23 Lewis Slack was racing his first outdoor race for the Club after running a 60m and 300m Indoors during the winter. In an excellent 200m race where the first three finishers were all credited with the same time of 23.9, Lewis was placed 2nd; And in Heat 2 Benjamin Whittaker clocked 24.3 in 3rd spot. Millie Pilkington ran her first race for the Club in the 200m running 34.9 in 4th in Heat 3. 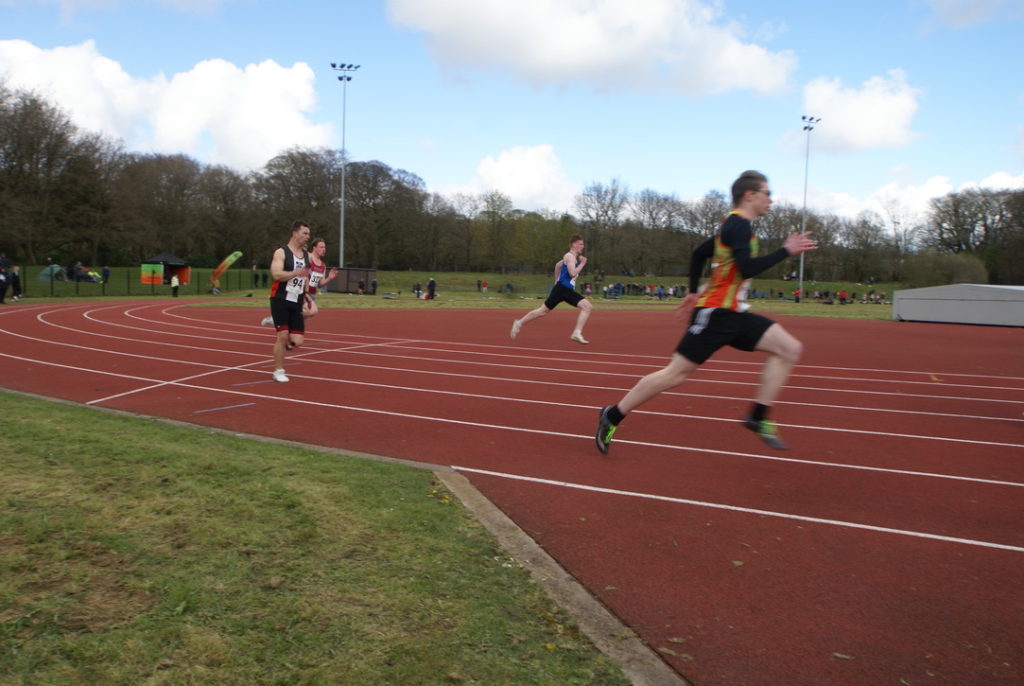 First year U13 Alex McKinlay ran his first race for the Harriers on the track in the 100m running 17.6 in 5th spot. Luke Watson was running 100m for the first time as he moved up to the U15 age category starting off well by winning his Heat in 12.9 whilst another Harrier making his racing debut was Harry Harwood in the same Heat, clocking 13.6 in 4th – the same time as 3rd place. The U17 Men’s 100m featured eight athletes, three of them Blackburn Harriers, resulting in 3rd spot for Harrison Allocock (12.8), 5th place for Omar Juma who clocked 13.4 (5th) in his first race for the Club and Jack Paget-Fowler in 8th running 14.1 and a new PB by half a second. Brothers George and Benjamin Whittaker were in Heat 1 and 2 respectively of the Senior Men’s 100m with George placing 4th (12.1) and Benjamin 2nd in 12.6 alongside team mate Jacob Nestor in 3rd with a time of 12.7. Amy Wiggans and Poppy Preece paired up again in Heat 1 of the Senior Women’s 200m with Amy running 27.7 in 3rd and Poppy 28.3 in 4th which equaled her personal best. Heat 1 of the U15 Girls 200m saw Isabela Thompson run 31.3 in 6th position, having never run the distance previously whilst in Heat 2 Imogen Robinson clocked 31.6 in 4th spot with Emily Smith running 32.4 in 6th. Holly Moore who had earlier run her first ever race in the 100m doubled up in the U13 Girls 200m, finishing 5th in 33.5.

As ever at Mid Lancs, the Long Jump had loads of competitors with 16 in the U13 Boys and 15 in the U13 Girls. Theo Robinson came 4th in the Boys Pool with 3.67m just 20cms shy of his best. In the Girls Pool Leila Pilkington had a good day by winning the event with a leap of 4.11m with Holly Moore in 5th jumping 3.29m and Dana Juma in 13th with 2.69m. Bothers George and Benjamin Whittaker competed in the Long Jump which resulted in U20 George taking 3rd spot with a new PB of 5.91m – an improvement of 13cms  and Benjamin placing 4th with 5.69m – also a new PB by 2cms.In the same Long Jump Pool Senior Kail Sturgess placed 5th with 5.61m whilst U20 Samuel Mutombo came 7th with 5.09m. Jack Paget-Fowler was the next one setting a new PB in the Long Jump as he leapt out to 4.55m (5th) to improve his personal best by 23cms. Kail Sturgess took on the Senior Men’s Triple Jump placing 3rd with a jump of 11.53m. U15 Daniel Nuttall had an outdoor personal best of 5.25m in the Long Jump and extended that to 5.36m in winning the event. U15 Imogen Robinson set a new PB by 4 cms in her Long Jump with 3.77m (8th). U20 Poppy Preece had two senior women in her Long Jump as she came 3rd with 4.03m and in the High Jump, bottom of age Kara Dacosta placed 2nd with a clearance of 1.50m. Theo and Imogen Robinson contested their respective U15 High Jumps which saw Immogen place 3rd with a 1.28m and Theo, unfortunately the only competitor clearing a new PB height of 1.33m.

In the Senior Men’s Hammer U23 Anthony Kent set himself a new PB to open the season – an improvment of a metre and a half in winning the event. U20 Matthew Heywood took 2nd spot choosing to throw with the Senior weight – 47.75m being his longest throw overall. Bottom of age Harry Pilkington was taking on the Hammer for the first time and managed a best of 13.20m, sadly being the only competitor. Grace Bontoft who was also helping officiate for the Club, won the Senior Women’s Hammer with a throw of 36.69m. Harry Pilkington took the win in the U15 Boys Shot Putt with 7.08m whilst Anthony Kent took 2nd spot in the Senior Men’s Shot Putt with 10.25m before going on to win the Discus with 37.47m. Harry was the sole competitor again in the U15 Boys Discus where he threw 18.20m. In the Senior Javelin Matthew Heywood had a rare outing throwing 24.38m in 2nd whilst Poppy Preece – the only U20 in the field – came 6th with 15.32m. Kady Thompson and Isabelle Hartley competed in the U17 Women’s Javelin – Kady placing 5th (20.45m) and Isabelle 6th (19.22m) which was a new PB for her. Loucas Lancashire and Felix Thompson threw in the U15 Boys Javelin – both first year in the age category – resulting in Loucas placing 3rd with 23.51m and Felix 4th (23.15m), both lads setting new PB’s. Race Video via You Tube

Helen Leigh is a pretty awesome character with a reluctance to be ever put off by how tough a race might be. On Saturday just a couple of days after helping out on James Gibson’s continuous summer Wainwright’s completion, she was out again, this time in the Eskdale Elevation Fell Race held over 13 miles and close to 5000 feet of ascent. The race was won by Huw Davies (Mercia) in a time of 1hr 53.06 whilst Helen, who uncharacteristically, made a mistake on her line, having to add another two miles to her race to get back on track, finished in 46th position with a time of 2hr 53.14. That clearly cost her as she told the Harriers the day after “Well I wasn’t expecting much after an epic outing supporting James at 4am in a blizzard on Thursday

… but I set off well and felt strong for the two big climbs. I took a good line off Scafell and was flying down in 3rd place I think, but I took a wrong line and ended up far too low and slightly lost in some really tough terrain. Had to track back up and ended up doing nearly 2 miles more than my friend! So made a bit of an arse of it and finished in 5th I think which was frustrating but still a good run out on a great rough course.” Chris Walton had been concentrating on improving his Half-Marathon time and targeted the Zurich Half-Marathon today – April 10th – and it went well for him. Chris set himself a new PB by well over half a minute as he clocked 77.12 and commented to the Harriers afterwards that it was a “Great run at Zurich half and all the training went to plan over the moon with my time and my place 35th“. Some three hundred athletes took part in this event won by Aidan Holgate in 66.56. V50 Nick Gaskell took on the event and had a very good day finishing in 6th place with a combined time of 72.24 for the Swim, Bike and Run. Nick had the second fastest run of the day (18.59) and only bettered by the race winner.