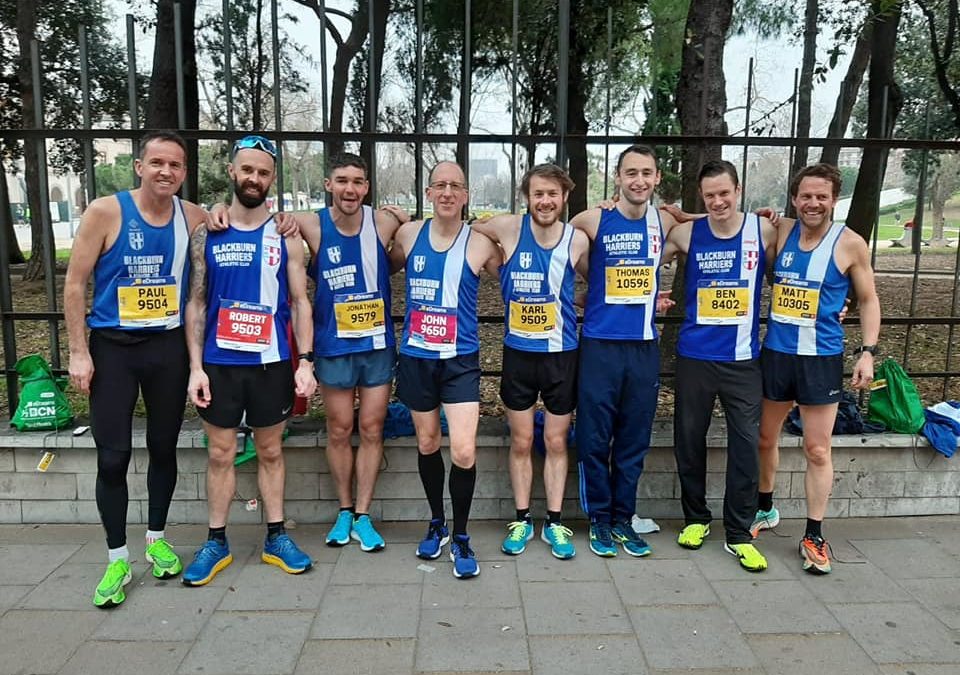 For the second year running, a group of the Harriers Senior Men went over to Barcelona for the Half-Marathon which attracts somewhere in the region of 25000 entries. John Cookson, Ben Fish, Paul Guinan, Jonny Murphy, Tom Blaney, Matt Nuttall, Rob Eccles and Karl Billington made up the runners whilst George Woodburn and Evan Cook were the back up team and cheerleaders. At the front end of the race, just two seconds separated the first three as Victor Chumo broke the hour mark to clock 59.58 for the win with Stephen Kissa and Moses Koech in 2nd and 3rd places respectively with the same time of 60.00. 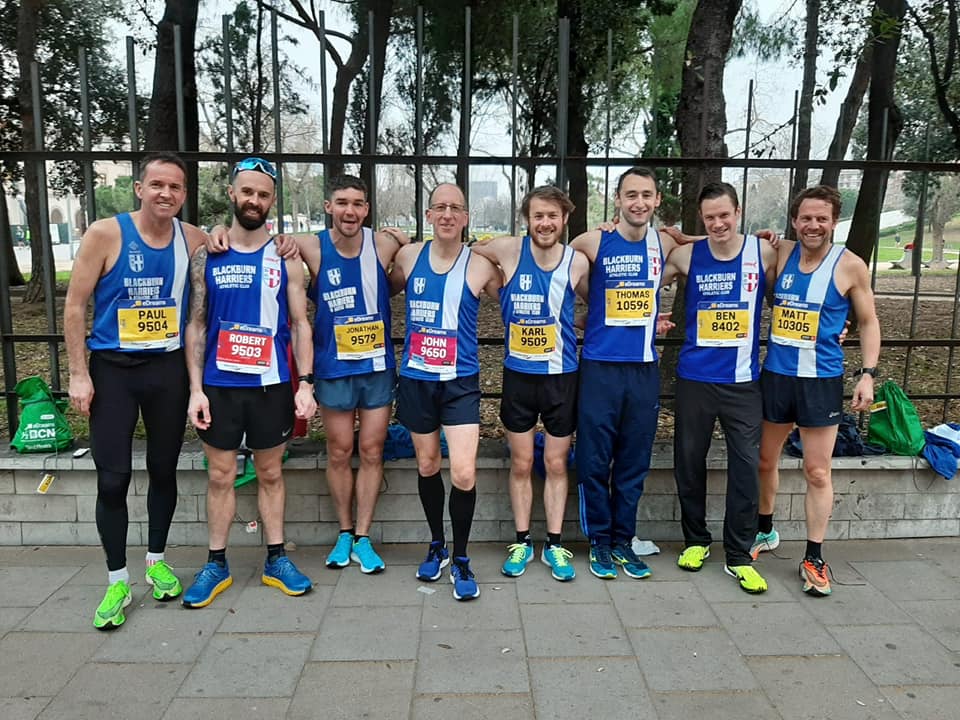 The Harriers highest placed athlete was Ben Fish who placed 93rd overall. Since 2006 – over the last 14 years – Ben has had a remarkable record over the Half-Marathon distance posting times of either 65. 66. 67 or 68 minutes at least once in every year, and often more than once, which is a fantastic level of consistently quality endurance running. Again in Barcelona, he achieved that mark as he clocked 67.46 and as modest as ever, he told the Club that “it was good to be back under 68 mins. It was a bit of a slog and the first 5k was a bit slow, great event and really well organised. Great weekend with the lads, especially after missing it last year. well done to everyone, great effort by all!“ 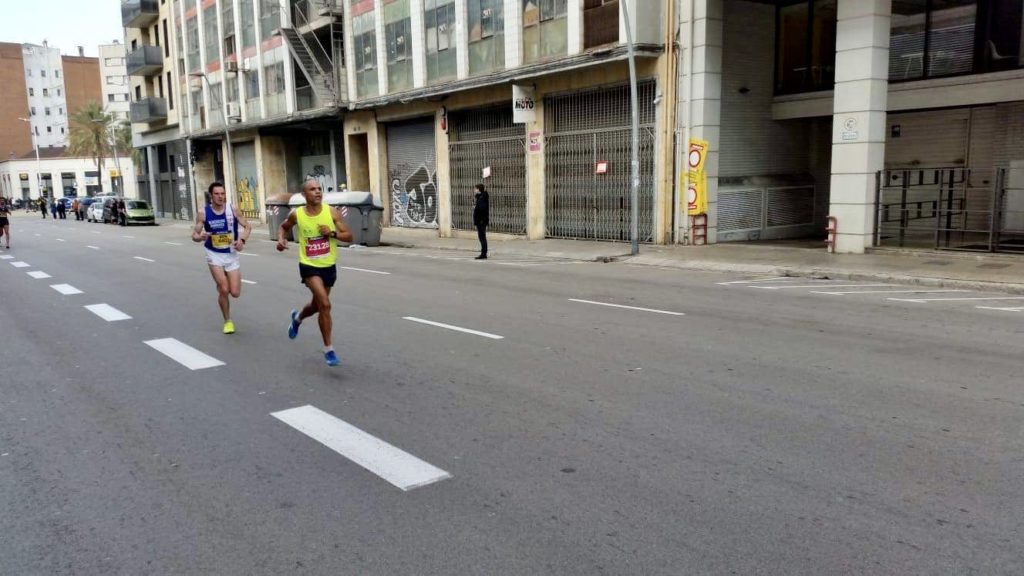 Karl Billington entered his race with a previous best of 73.58 and had hopes of reducing that time and that is exactly what he achieved with a massive new PB of 71.25, chopping two and a half minutes off his time. Afterwards the spoke to the Harriers saying he “really happy to come away with a big PB despite not feeling the best during the race. Really had to work for it from 5k onwards. Big shout out to everyone else who ran well, as well as captain guiny for organising it all”. 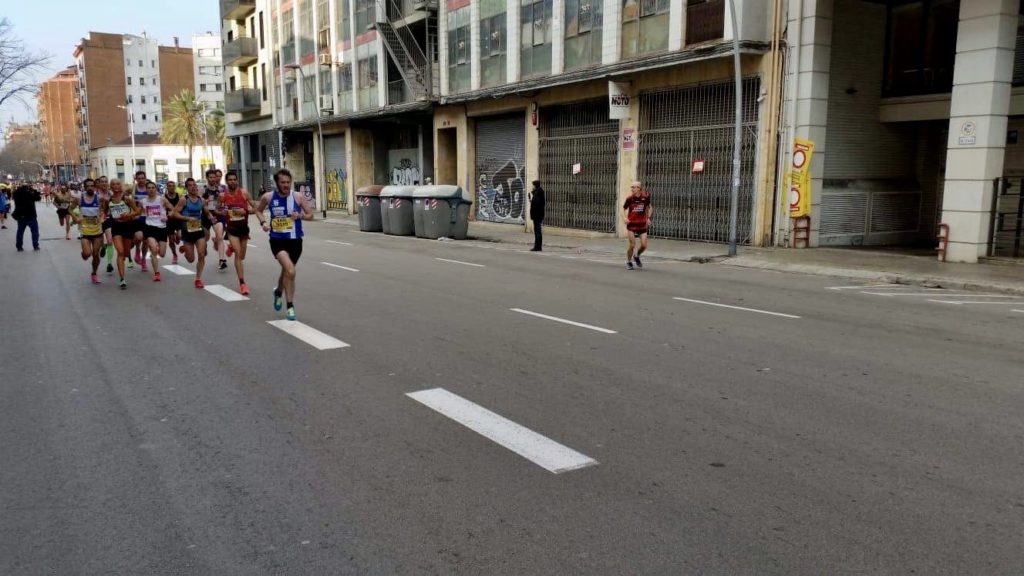 Two athletes who have not had much luck with injuries – Tom Blaney and Matt Nuttall  – had good runs with Tom clocking 76.45 which was just a minute outside his personal best and not having raced since November 2019 can be quite pleased with that time – equally  Matt who like Tom, is getting back into consistent training and racing which is showing as he clocked 79.12. Tom spoke to the Club post race telling us “I wasn’t expecting anything time wise this weekend given the lack of training I just thought I’d run on feel and enjoy it. I was delighted to run better than expected, finishing the race strong and it really summed up a quality weekend with the lads, thanks Guiney for organising it all, absolutely spot on”. 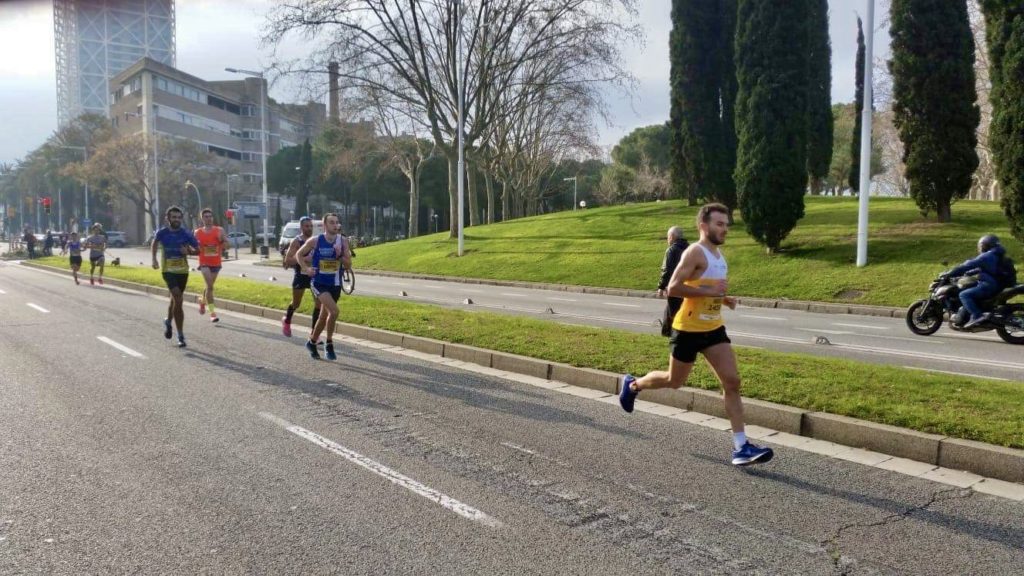 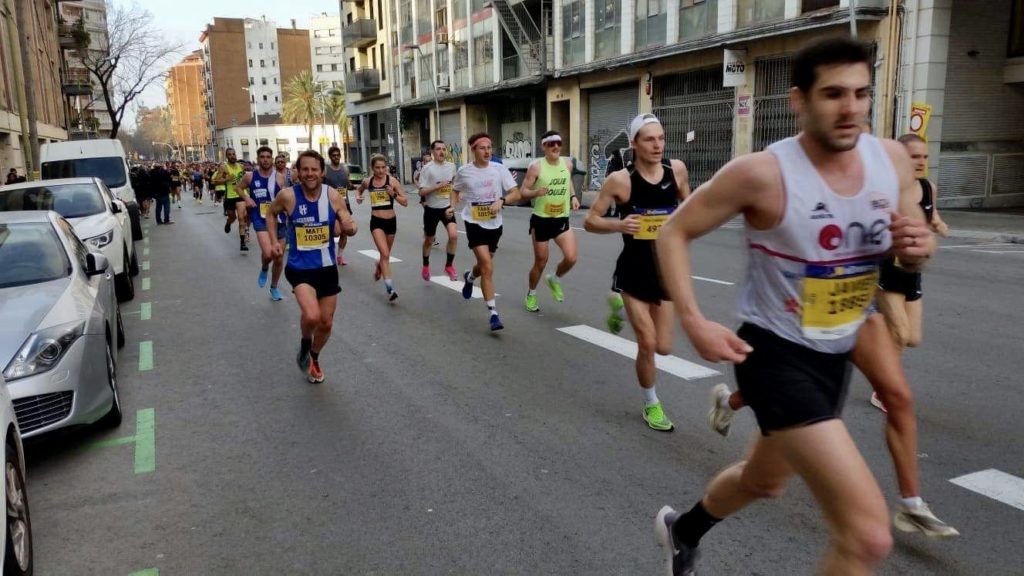 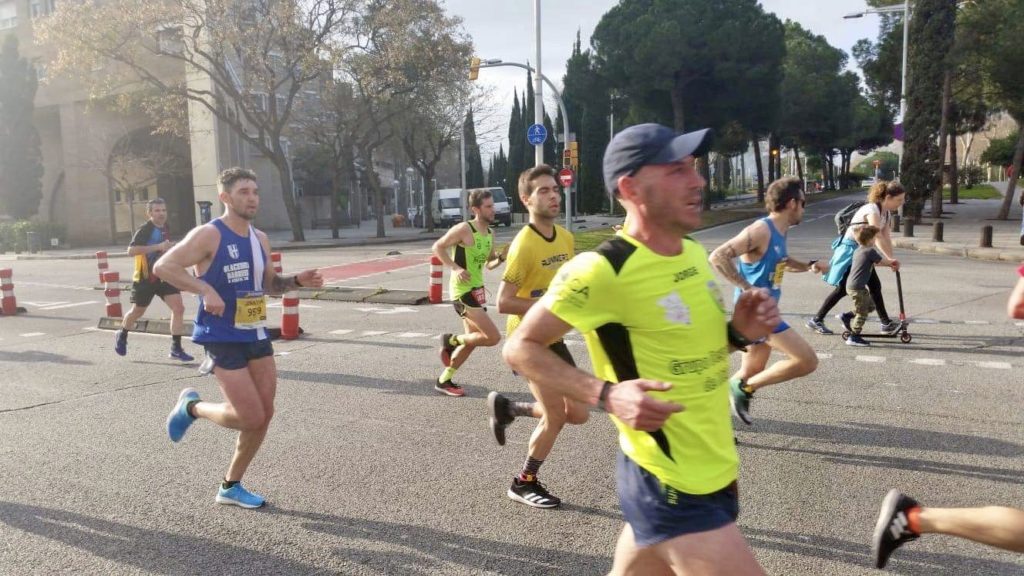 Jonny Murphy went into the race with a personal best of 82.36 and took nearly a minute and a half of that time to clock a new PB of 81.08 and told us “What a great weekend! Can’t thank the lads enough I’ll take a lot away from Barcelona going forward. Also a big thanks to Paul organised very well, and a nice PB is just icing on the cake! Well done to every one and thanks!“ 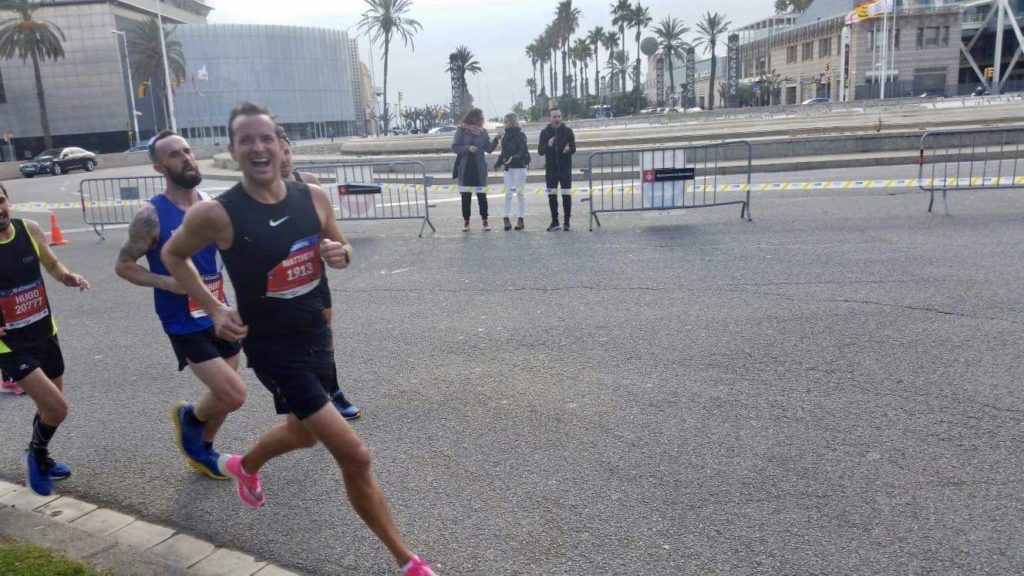 Team Captain and Tour Organiser – Paul Guinan – ran a solid time of 81.46 and commented “Great weekend away with the lads, a great race and wonderful company, a truly great time to be a Blackburn Harrier. Another memorable weekend with BH with some top class running and to put the icing on the cake two great runners in George W. and Evan C. gave their all from the side lines ! As trip organiser l wouldn’t change a thing and know it was appreciated by all”. 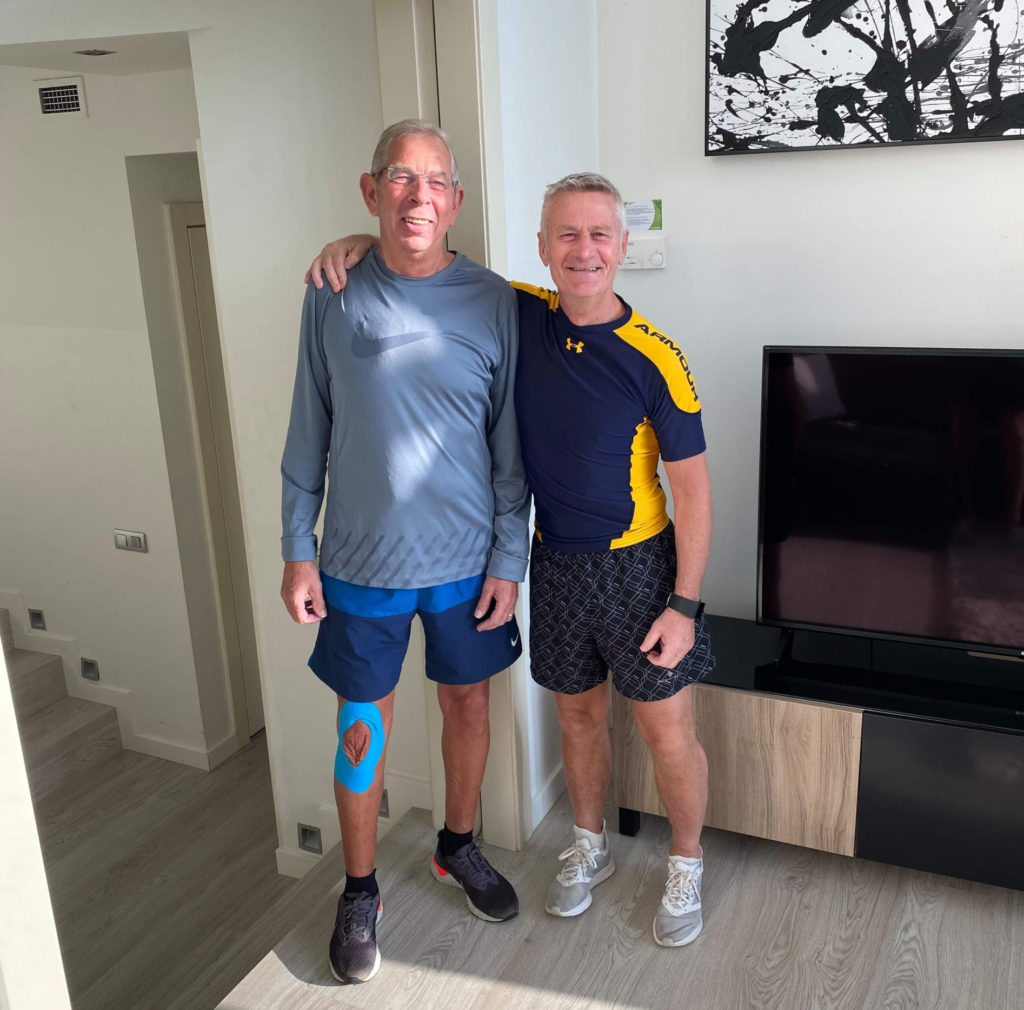 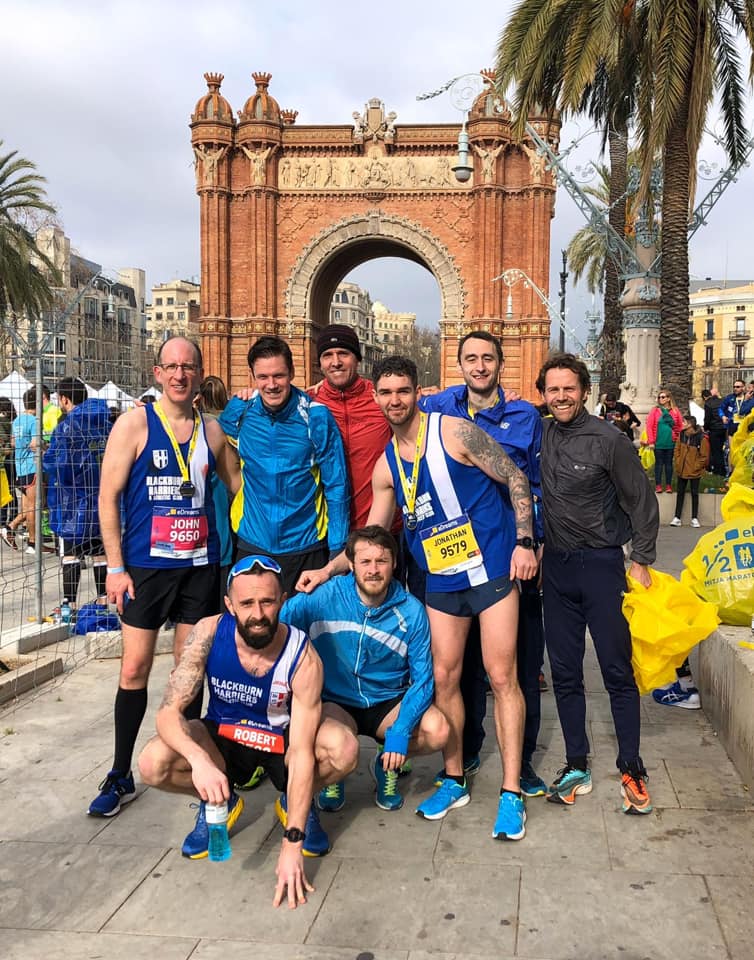 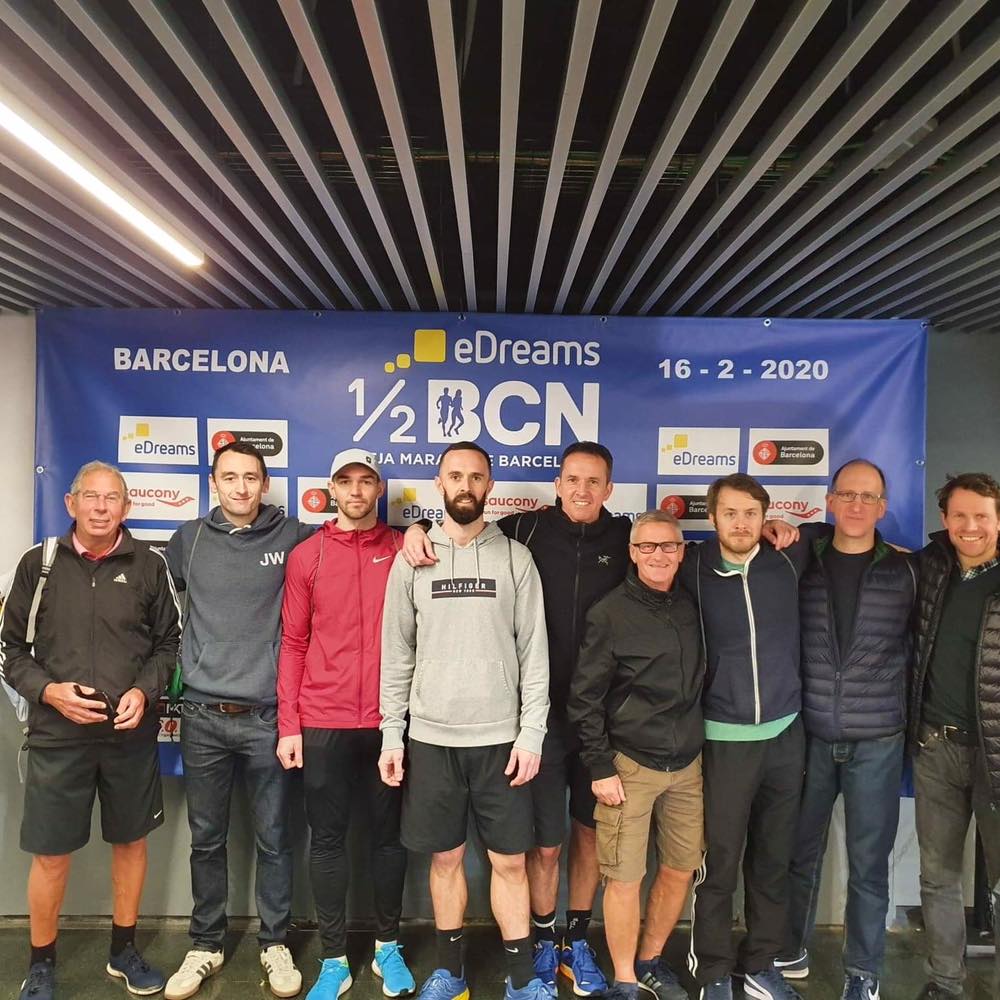 Tony Greenwood is still going strong as a V60 and took the opportunity whilst across in America of taking on a 5k Race in Miami. The overall winner – Najim Mahmoud clocked 15.20 with 2nd place in 15.45 and 3rd spot (15.58). Tony looked strong as he came in and told us “Last Saturday at 7:30am – February 8th – along with another 3000 we ran towards the rising sun in the Miami Tropical 5K…..the start of a running weekend as the Marathon and Half got underway at 7am Sunday, I managed to win the 5k M60 Category in 19:14 and come in 24th overall … poor standard with many it seemed doubling up and running Sunday!” 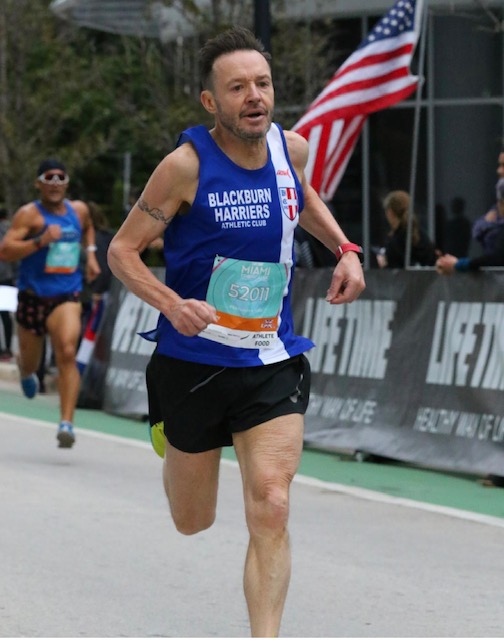 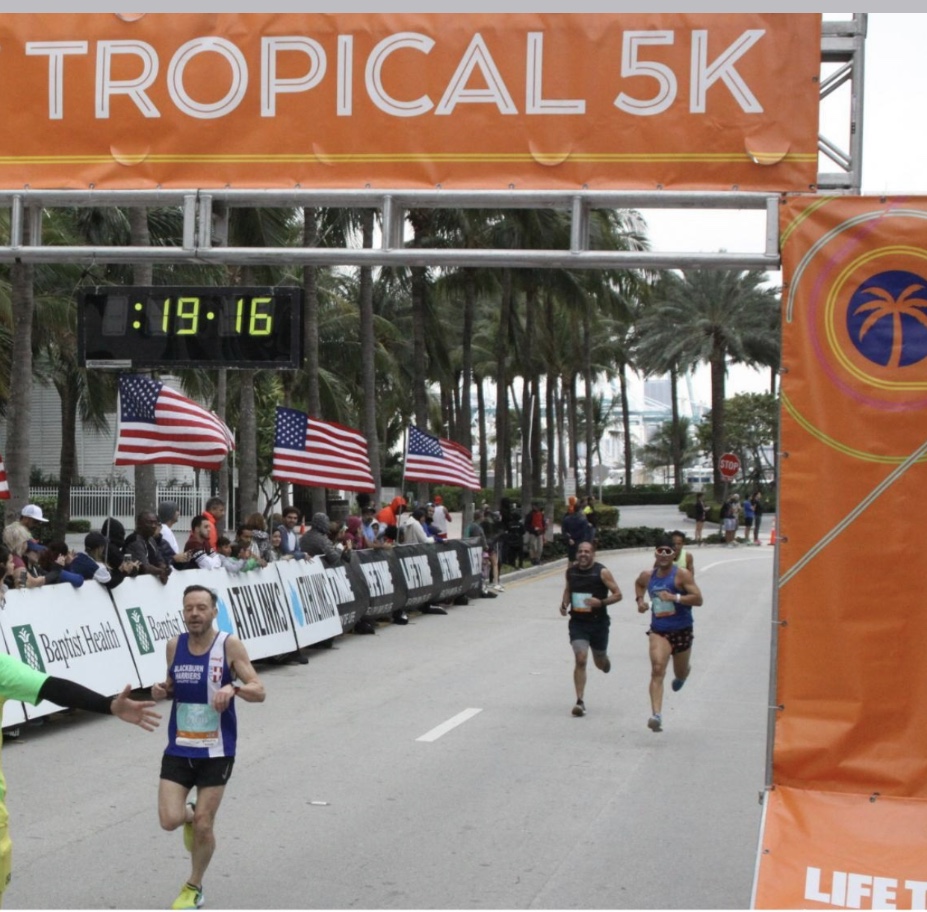 This race proved to be a belter for Rachael Gavin as she came home in 22nd place overall out of a field of 235 – the race being won by Thomas Andrew in 33.46. Rachael’s time of 40.26 gave her a cracking new PB by over half a minute and also won her the 1st Woman’s Prize. A delighted Rachael spoke to the Club after collecting her prizes, commenting that it was “A great race out in Lancaster this morning. George’s Tuesday night sessions are definitely paying off! The prize was a toss up between an iron and a George Forman Grill…the George Forman won“. 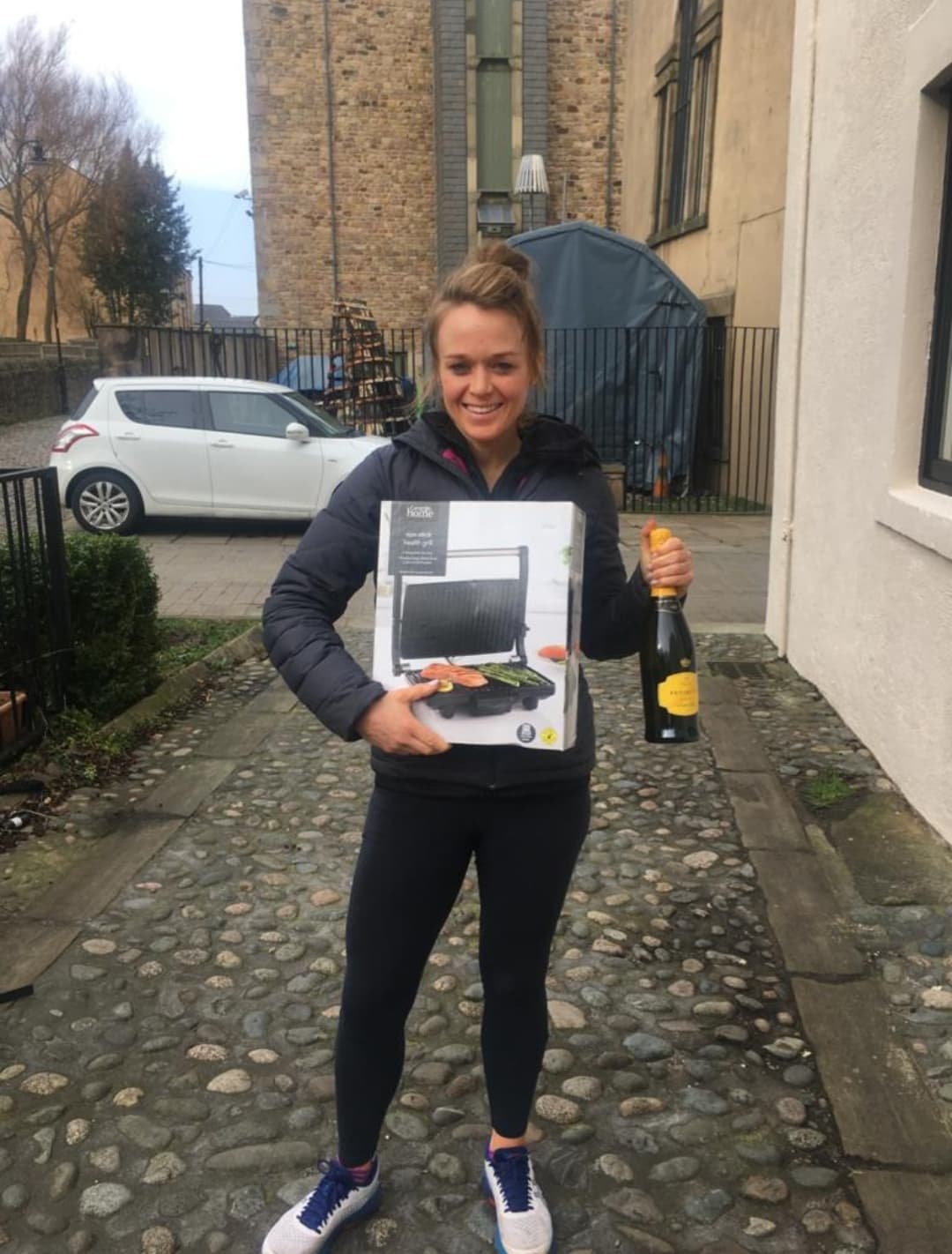 Rachael, ‘George’ and the drink