Edge Hill University was a great location for this years North West Road Relays which kicks of a period of four weeks of Relays, with the next Relays at Sportcity on Sunday September 15th organised by Northern Athletics and culminating in the National Championships on October 6th at Sutton Coldfield.

Gathering at the Start………..

….and they are off 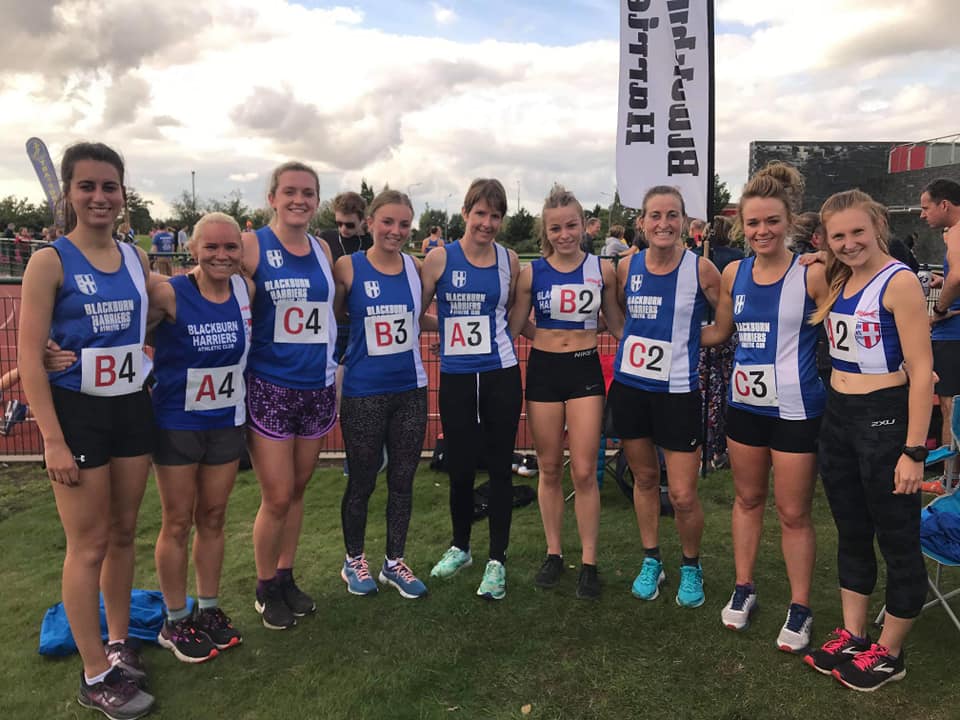 The Senior Women fielded three teams with 51 teams in total in which the A Team of Annabel Ralph (19.32), Maddie Elliott (20.09) and Joanne Nelson (19.18) finished 4th overall and first Lancashire Team to take the Gold Medal. The B Team of Carly Edwards (21.00), Ellen Sagar-Hesketh (21.52) and Rachael Gavin (21.27) came home in 14th overall taking the Silver Medal In the Lancashire Championships. Our C Team – Lindsay Davies (23.06), Hannah Cookson (22.01) and Charlotte Atkinson (22.28) came in 25th overall and 6th in Lancashire. Joanne ran the 9th fastest leg of the day overall in the North West and in Lancashire she was the fastest with Annabel 2nd, Maddie 5th, Carly 9th and Rachael 10th. 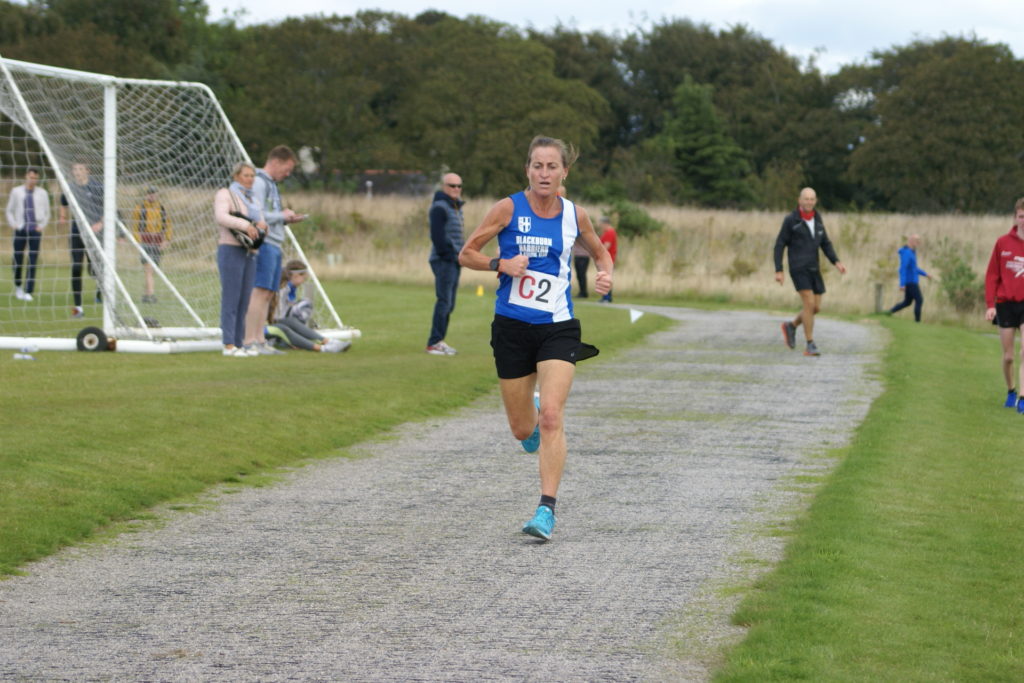 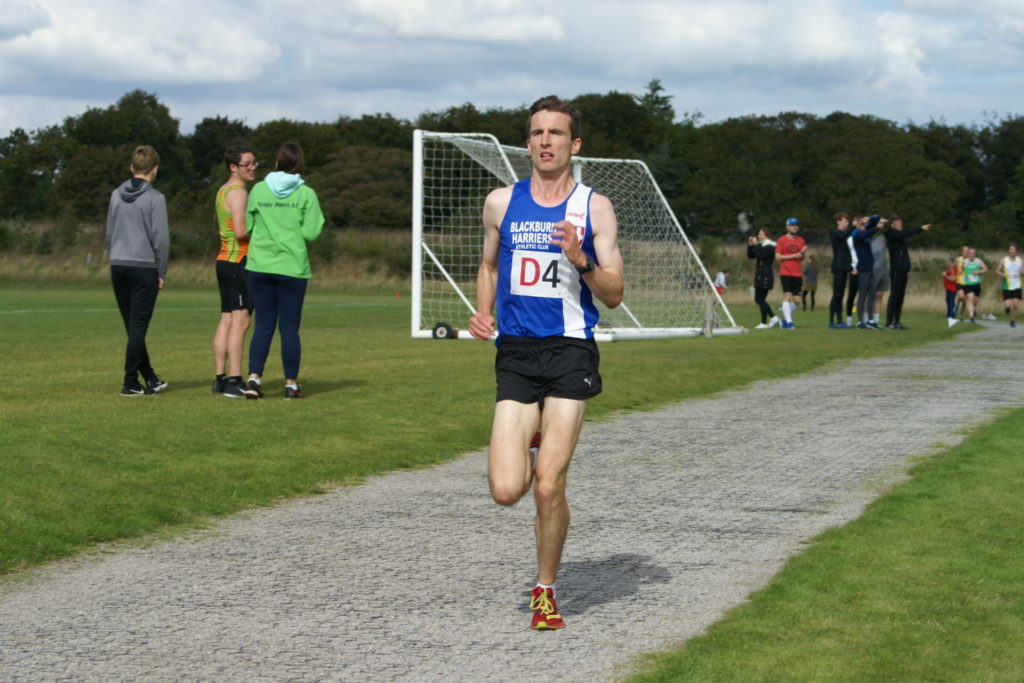 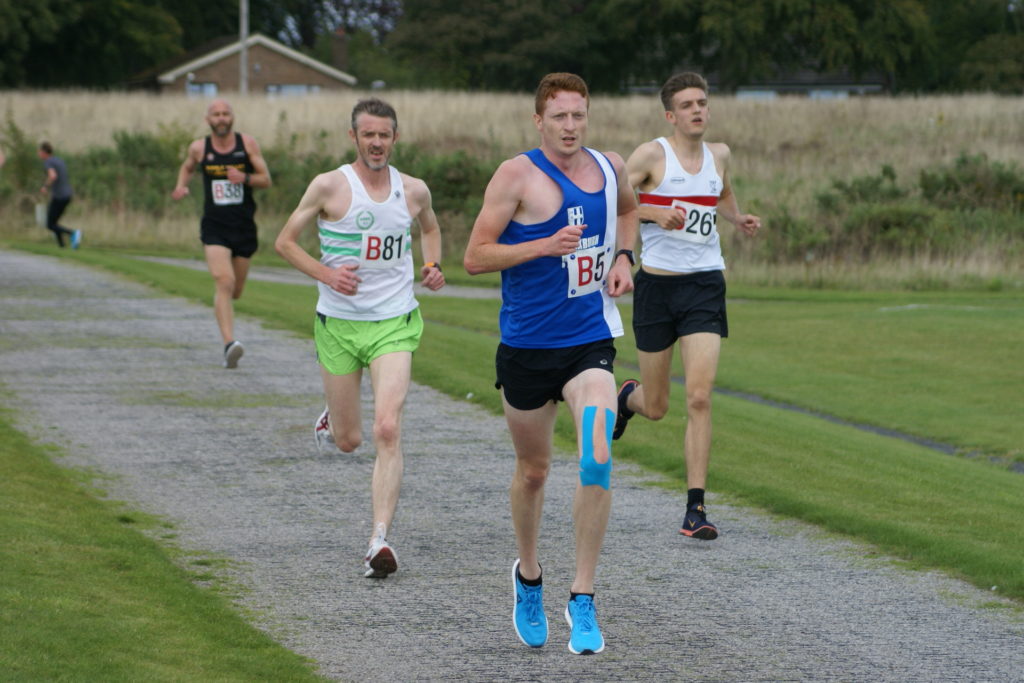 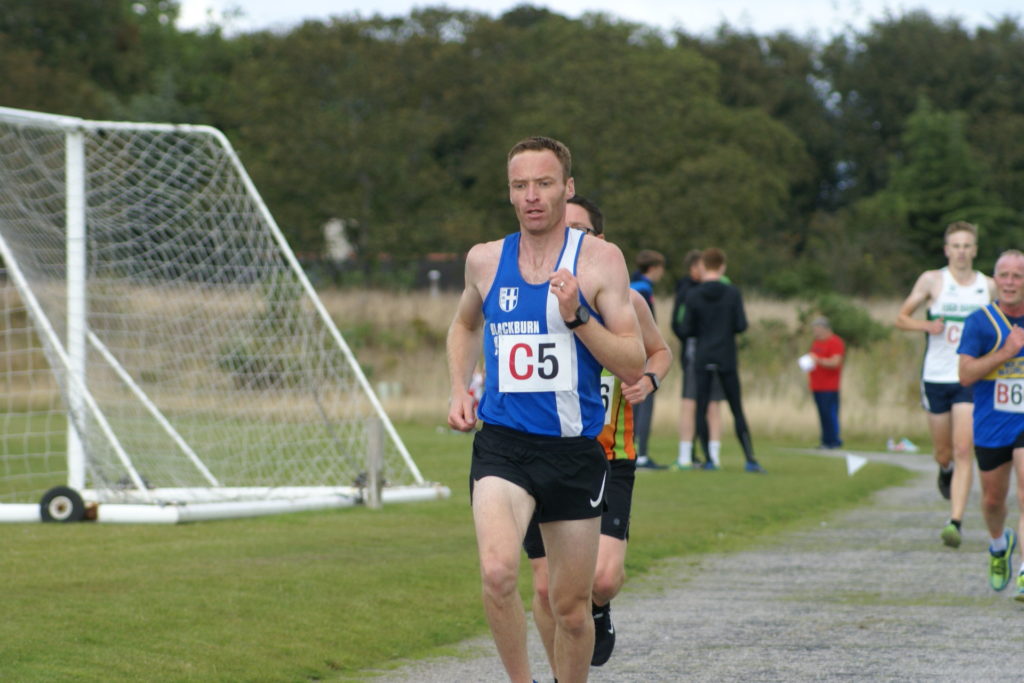 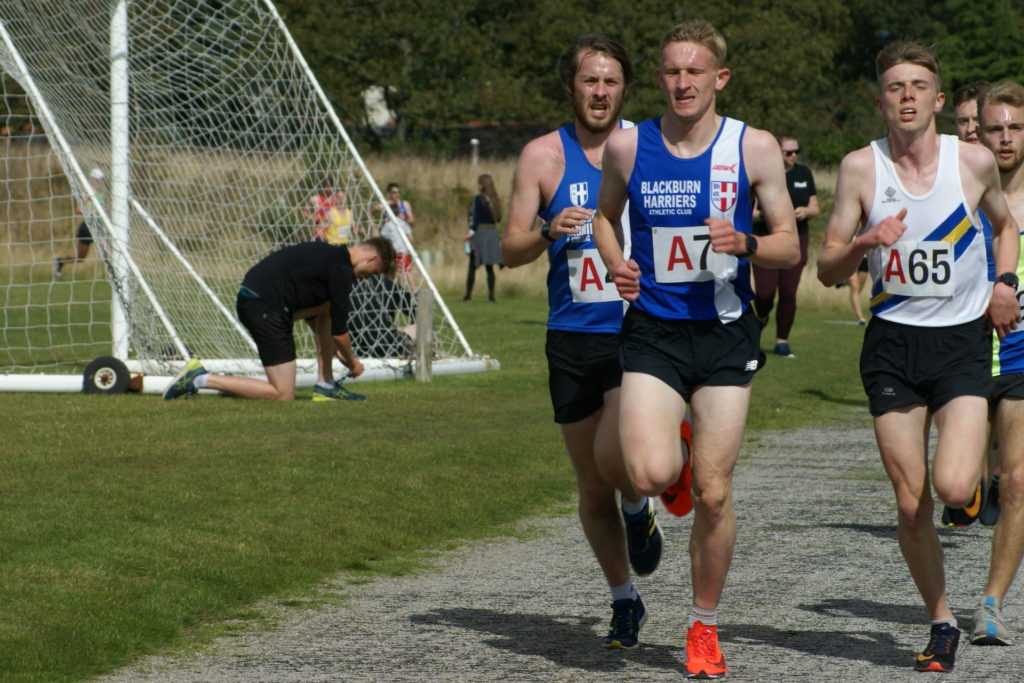 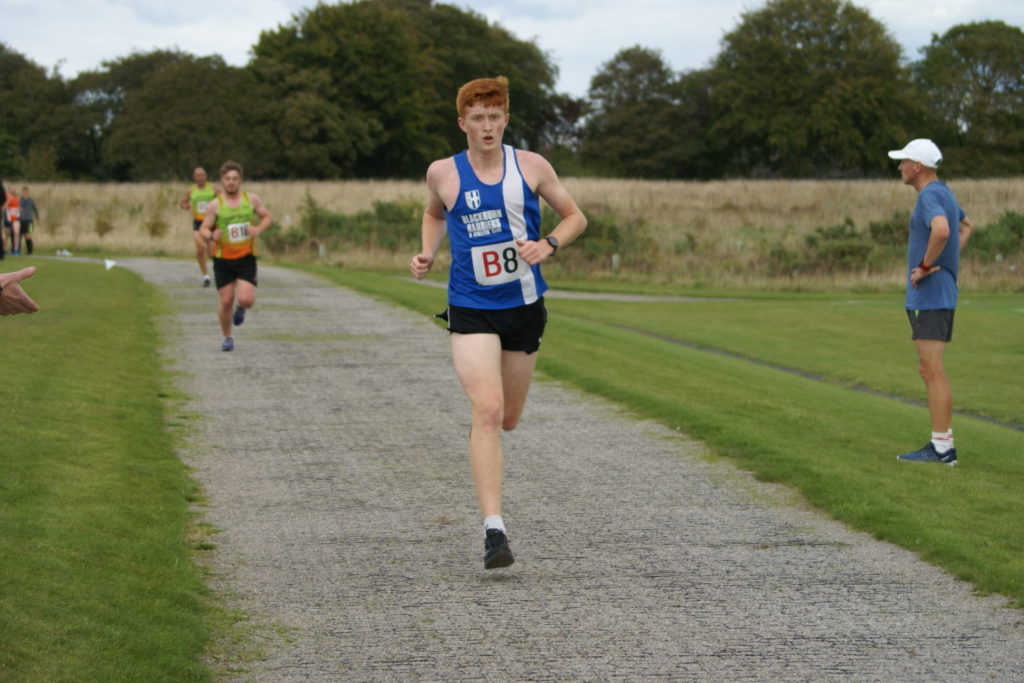 One of the great things about Relays is the sight of all the young athletes getting ready to compete and urging one another. Here we have some of the U15 and U17 Girls getting together before their respective races. 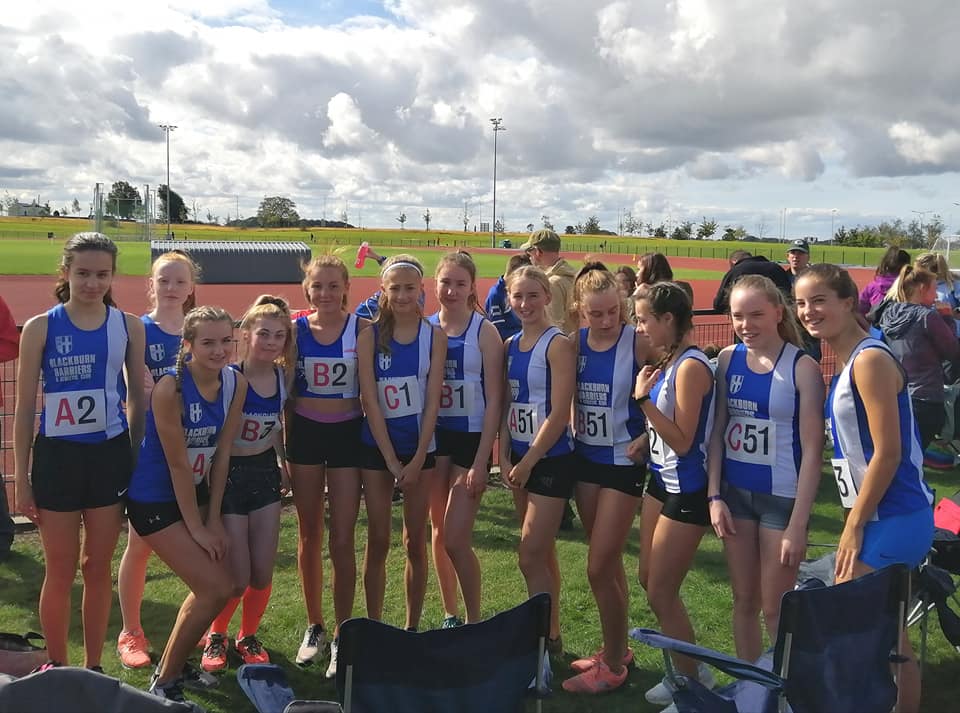 In the U17 Women’s Race involving 15 teams overall the Harriers came 9th in the North West and 1st Lancashire Team to take the County Gold. Eleesha Charnley on leg 1 ran the 5th fastest leg of the day overall and fastest leg in Lancashire. Eleesha went off on Leg 1 clocking 10.40 followed by Rebecca Ramsden on Leg 2 (13.01) and Amy Davies on the final Leg (11.40). 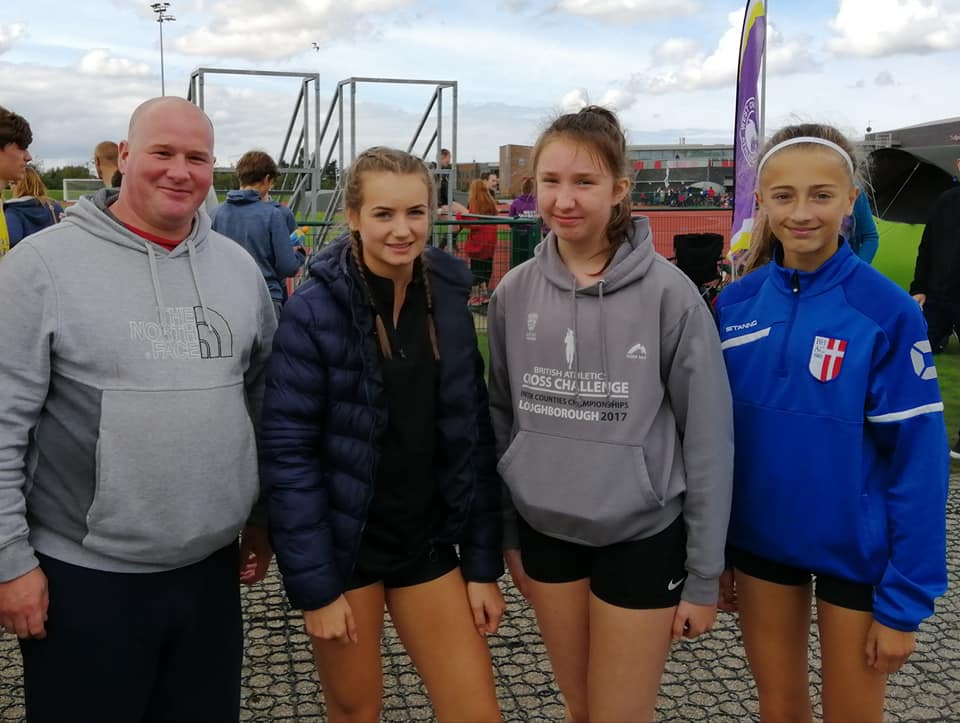 A larger field in the U15 Girls featured thirty seven teams – the Harriers having three of them with the A Team winning Bronze in the Lancashire Championships. The A team had Leah Hoole on Leg 1 (11.27) followed on Leg 2 by Hollie Cubbon (11.53) and Kiera Haxton on leg 3 (11.31). Just half a minute behind them came the B Team led on Leg 1 by Kate Cookson posting the fastest leg of all the Harriers U15 Girls with 11.11, followed on leg 2 by Eva Knowles (12.08) and Molly Nicholls on the last Leg with 12.09. Caroline Woodworth ran Leg 1 for the C team, running the fastest time of 12.04 with Kiera Booth clocking 12.31 on leg 2 and Eleanor Allsopp (13.06) on the final Leg. 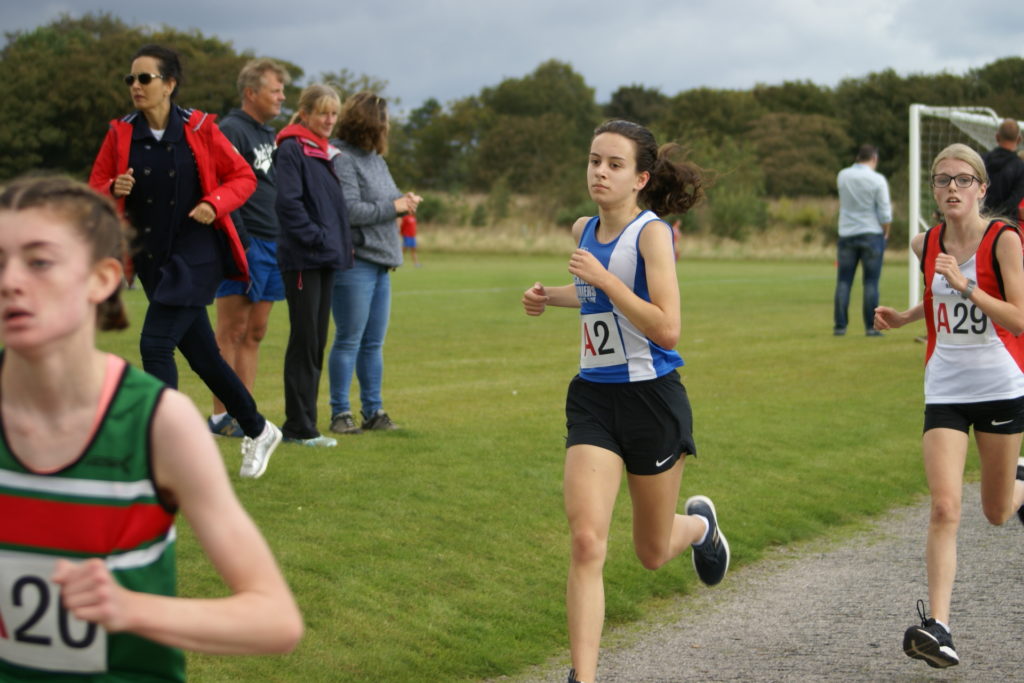 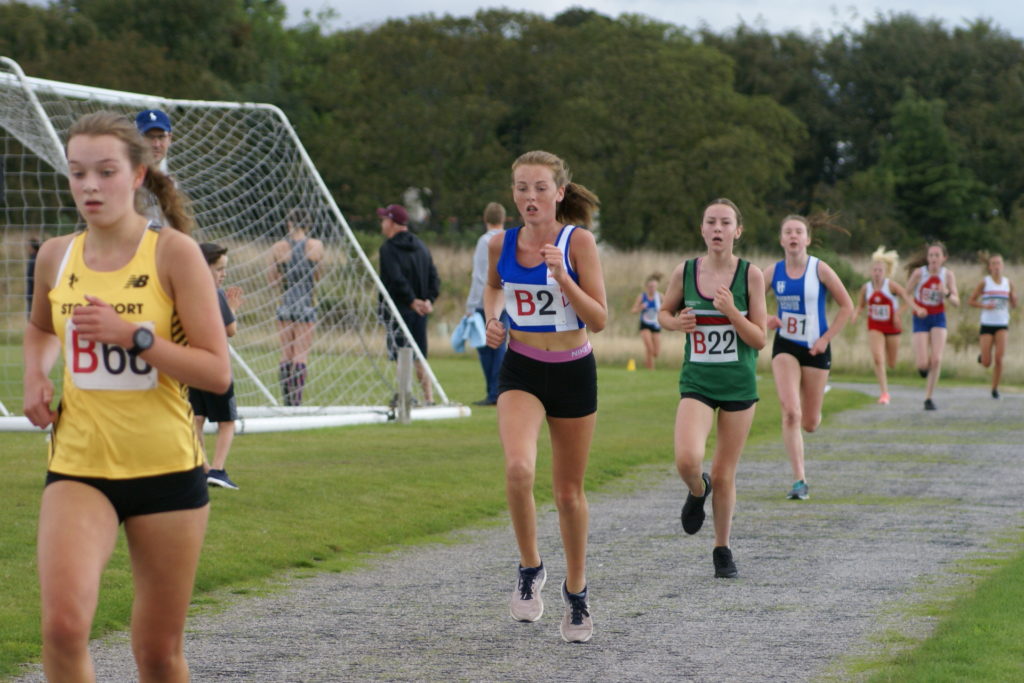 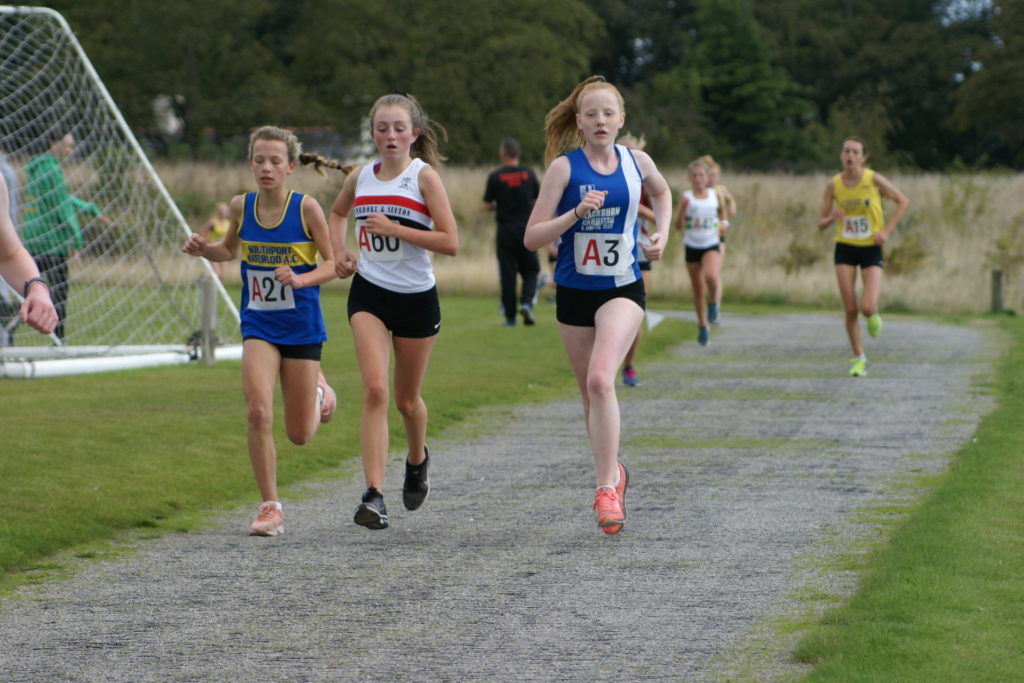 The U13 Girls Team finished 34th out of the 40 complete teams running with Imogen Robinson on Leg 1 running a time of 11.58 with Faith Gillibrand just one second slower on Leg 2 (11.57) and Isabelle Hartley on Leg 3 clocking 15.27. 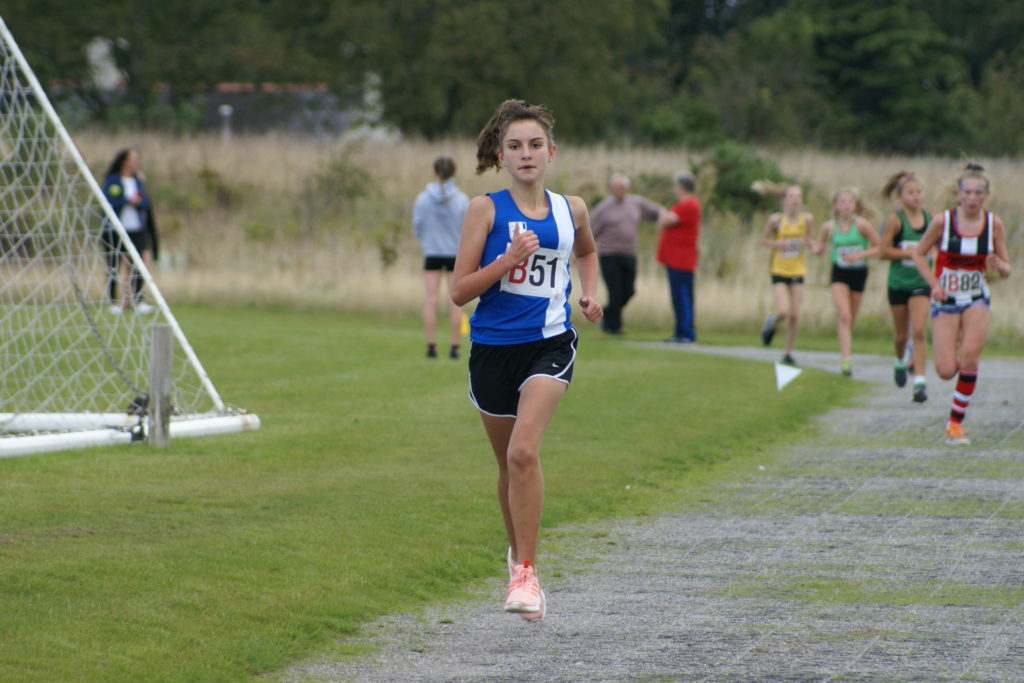 A late drop out meant that in the U11 Girls Race we had one full and one part team contesting with our full team finishing in 24th spot consisting of Hannah Davies on Leg 1 running 8.19, Charlotte Smith who got caught on the start line, losing time to the other girls on Leg 2 (9.49) and Lulu Sharp on Leg 3 with a time of 9.44. Alexa Hunt ran on Leg 1 in the part team running 11.40 with Leah Walker on leg 2 (11.11).

Similarly in the U11 Boys there was one full and one part team which saw the Harriers A team win a Bronze Medal in the Lancashire Championships led off by Theo Robinson who ran the third fastest Leg of the Lancashire runners in 7.29 supported by Felix Thompson on Leg 2 in a time of 8.41 and Charlie Haworth on Leg 3 (8.15). Loucas Lancashire ran the first Leg of the part team in 9.07 with Tom Hunt running 11.08 on Leg 2. 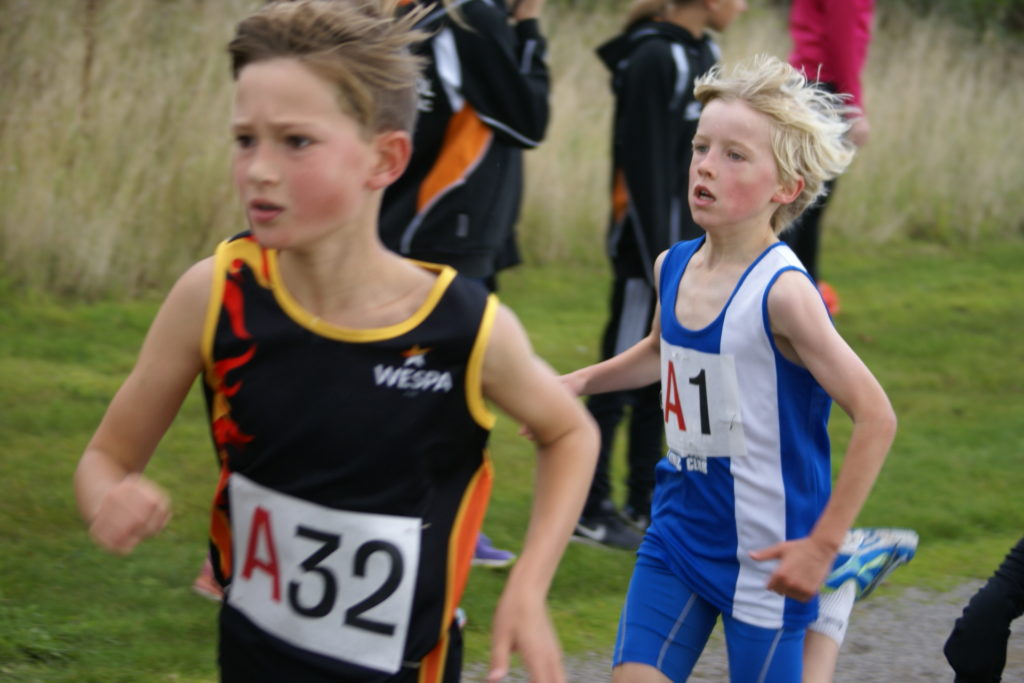 Three teams ran in the U13 Boys Relays faturing a total field of 37 teams. In the Lancashire Championships which was amongst seven teams, the Harriers won Bronze as the other two teams placed 5th and 7th. Daniel Smith led off on Leg 1 for the A Team clocking 11.20 with Ben Ham on Leg 2 running the fastest time of the lads (10.55) and Ben Livesey on the final leg clocking 11.14. The B Team saw Oliver Gill run 11.12 and fastest on Leg 1 with Matthew Smith running 11.26 on Leg 2 and George Ramsden 12.30 on the last Leg. Findlay Carroll ran fastest in the C Team with a time of 12.17 on Leg 1 followed by Daniel Nuttall (normally a sprinter) on Leg 2 (13.17) and Issac Smith on the Leg 3 (17.19).

The Harriers U15 Boys placed 11th and 16th overall and won Silver and Bronze in the Lancashire Championships, with six of them finishing in the top ten fastest Legs covering Lancashire Teams. The A Team saw Hayden Mercer run the fastest Leg in a time of 9.38 with Kyle Taylor-Pomfret on Leg 2 running 10.28 and Dexta Thompson 10.15 on the last Leg. The B Team saw Theo Watson on Leg 1 with a time of 11.03 supported by Codie Dewhurst on Leg 3 (11.01 and Jack Paget Fowler running the fastest time on the final Leg of 10.44. Saul Sharp and Umair Rafiq ran in a part team and both remarkably clocked identical time of 11.11. 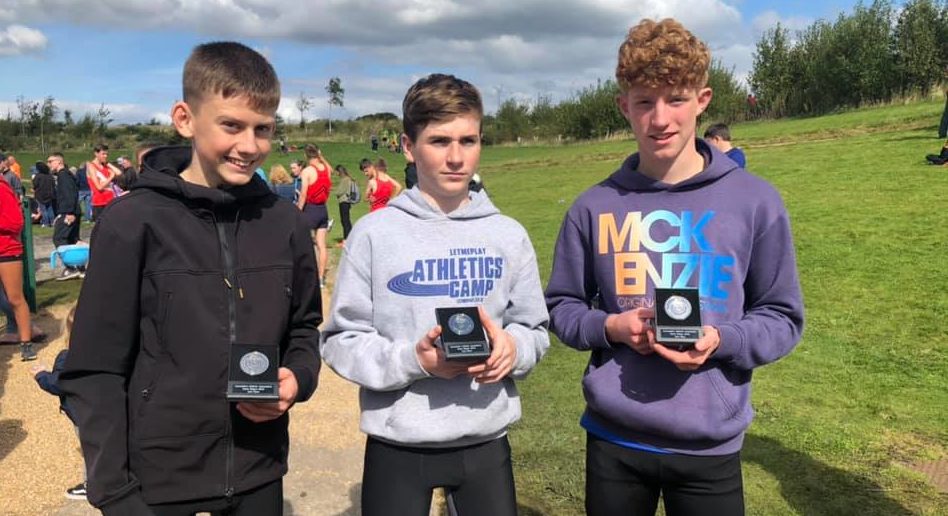 Just 20 teams contested the U17 Mens Race which saw Matt Ramsden run the fourth fastest Leg of the day as he clocked 16.23 on Leg 3, preceded by Sam Hodkinson on Leg 1 with 17.38 and Jamie Teare on leg 2 (17.33) all of which meant that they won the Lancashire Gold Medal. 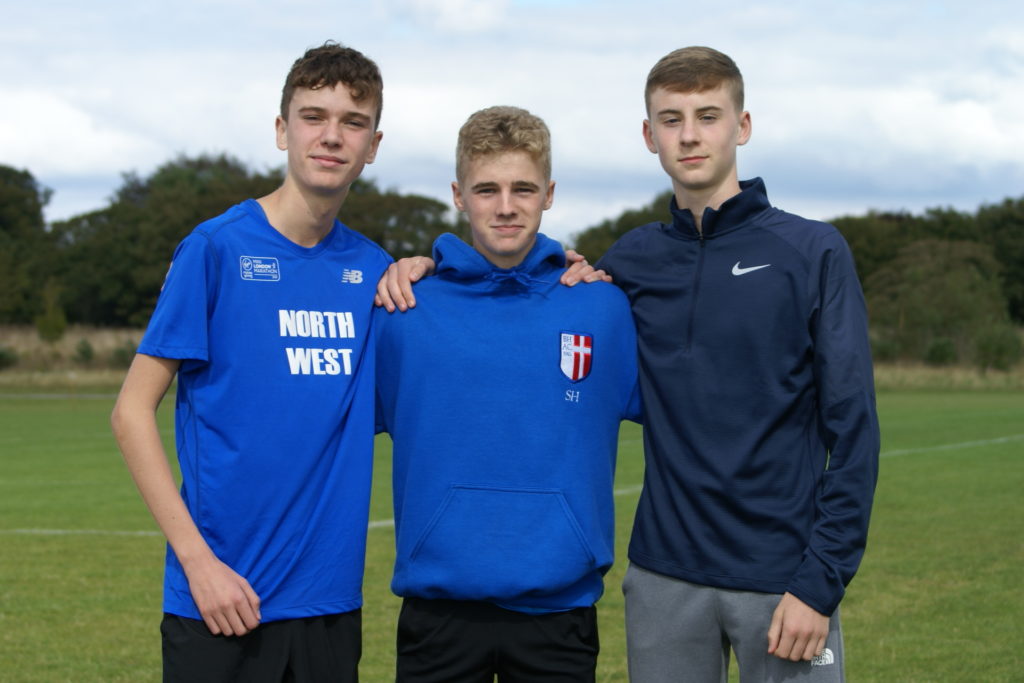 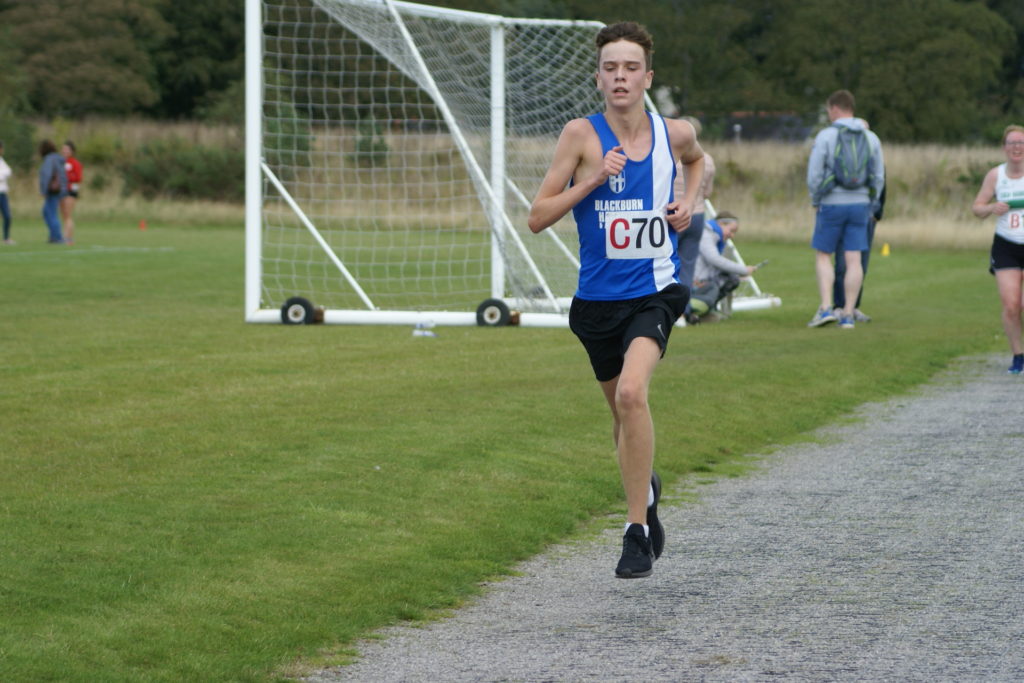 The New Balance 5th Avenue Mile opens a beautiful 20-block stretch of 5th Avenue to runners of all ages and abilities who want to run their best mile in New York City. Special races include a youth mile, the George Sheehan Memorial Mile for runners age 60 and over, the NYRR Road Mile Championships, and Olympic-caliber professional men’s and women’s races.

Jess Judd was invited to contest the Elite Race and Rob Warner entered the Open Race with both of them having really good runs.

Jess was the first British athlete home in 5th place clocking 4.27 behind the winner – Jenny Simpson who ran 4.17. Nick Willis won the Men’s Race in a very rapid time of 3.52 with Rob having another cracking run in 24th place, clocking 4.12 which was a new PB by four seconds.Rob was pleased with his race and told us that “it went really well yesterday, and a good end to the season for me!! I was quite happy with the race, it was 4 seconds quicker than the last time I did it so cant complain! I probably went off a bit too hard as I was on for about 4:09 with 400 to go but I just really tied up and ended being caught with about 150 to go! A good end to the season though and onto relays now!” 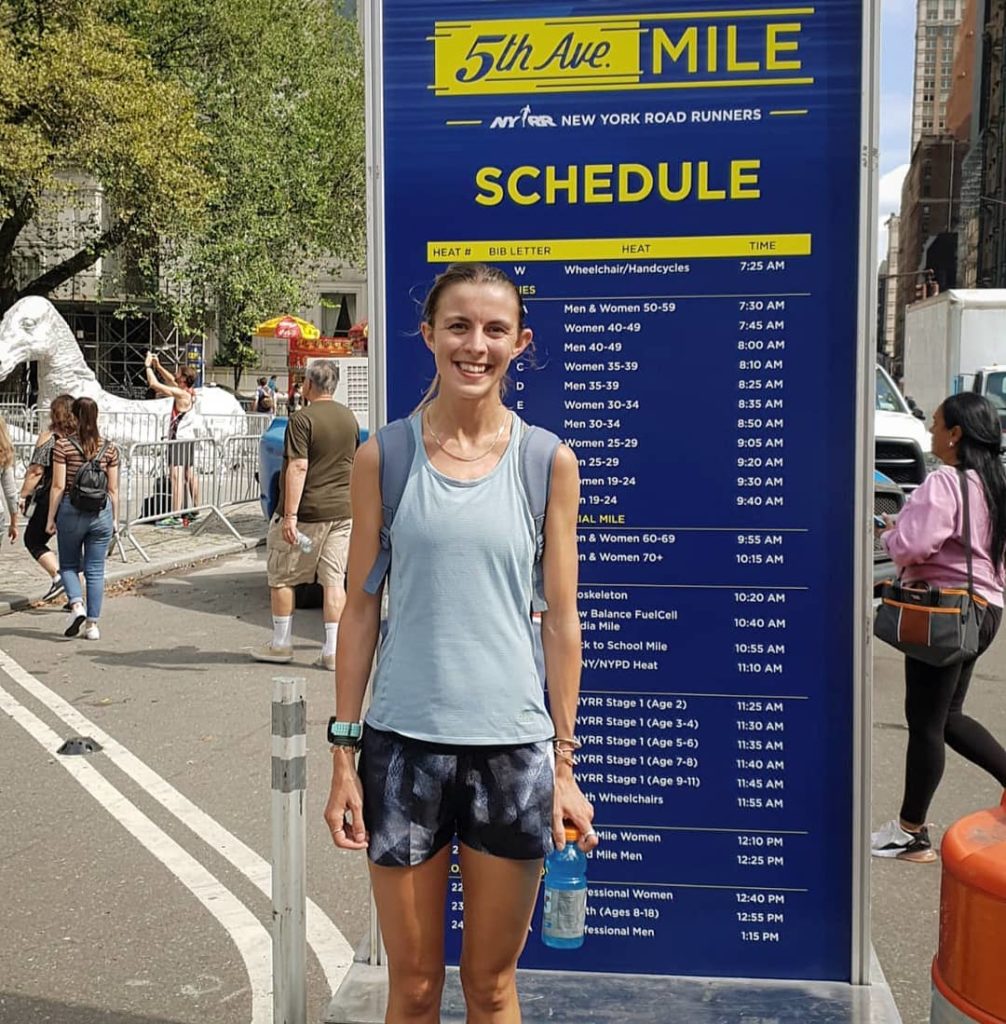 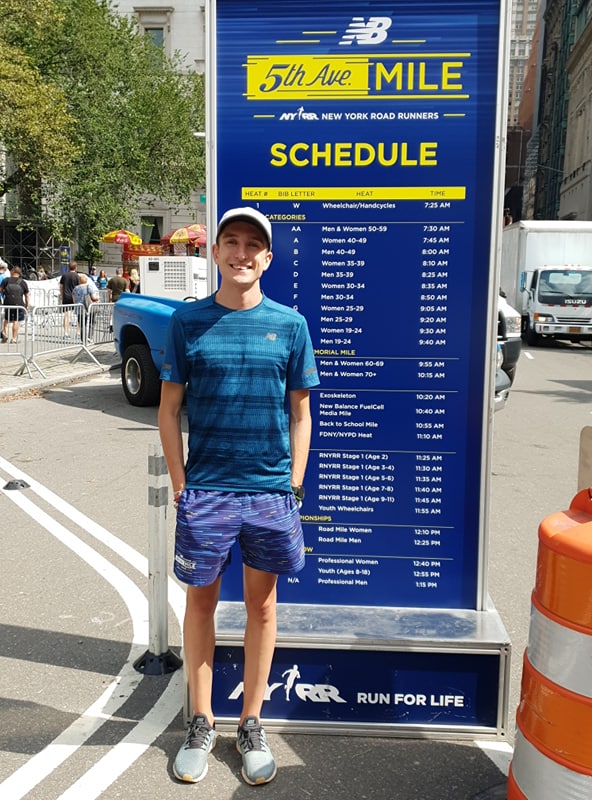 The Women’s Pole Vault featured a wno’s who of the Pole Vaulting world as ther athletes came together for a final competition before heading off to Doha for the World Championships in three weeks time.

Holly Bradshaw is in good form as she vailted her third succesive height of 4.70m plus to finish equal fifth in a competiton won by Katerina Stefanidi with a seasons best clearance of 4.83m. All the big names were out with Sidorova, Newman, Nageotte, Suhr, Morris among the competitors.

Matt Ramsden had a great battle with Sale Harriers George Safranauskasas at Trafford on Tuesday with just 0.05 separating the two of them. Safranauskasas clocked 2.04.62 whilst Matt placed 2nd in 2.04.67 – a new PB by three seconds. Nick Smith ran in the same Heat clocking 2.12.21 in 7th place whilst Calum Holmes took on the 1500m and ran 4.56.40 in 13th spot. In the Throws, Tony Balko battled pretty atrocious conditions for throwing but still mnaged to take 2nd out of a 9 strong field in the Discus with 33.19m and 3rd in the Shot Putt with 10.89m.

On the Fells with the Harriers

John Orrell was at it again with two races inside three days the first being the Burnsall fell Race on September 1st won by Mercia’s Simon Bailey in 13.54. John came home in 61st out of 86 runners clocking a time of 22.52. Then on to the Mucker Show on September 4th run in very wet conditions which was won by Keighley’s Joe Craven in 16.40. John placed 36th in this one in 24.59 commenting “Just back from a very wet Mucker Show. After Burnsall on Sunday that’s another 2 races in 72 hours. From 26 degrees to 12 degrees what a lovely British Summer. 36th today and a fiver for finishing. Almost better then cake!”

At Gorple Rocks (RESULTS) on Wednesday September 4th – won by Ilkley’s Tom Adams in 31.57, Daniel Whittaker and Mark Wilkin were out for the Harriers among a field one hundred and thirty one. Daniel was the first home in 29th place in a time of 44.15 whilst Mark came through the finish in 41st clocking 46.25. 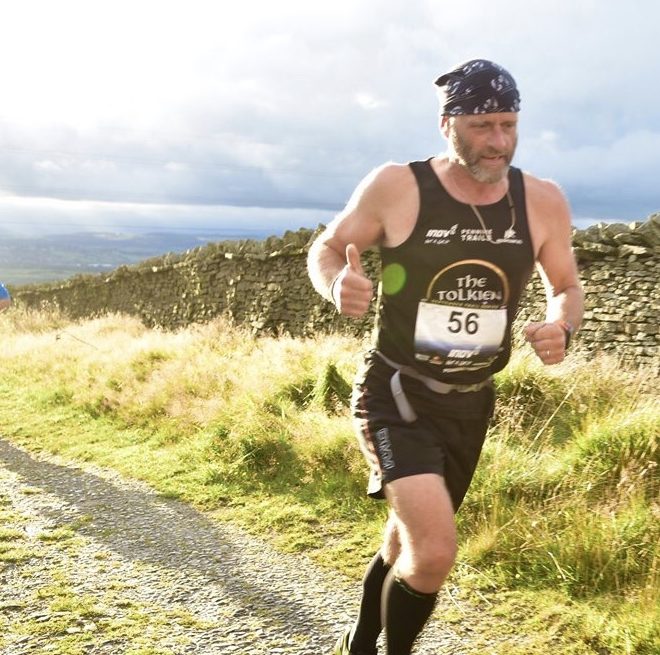