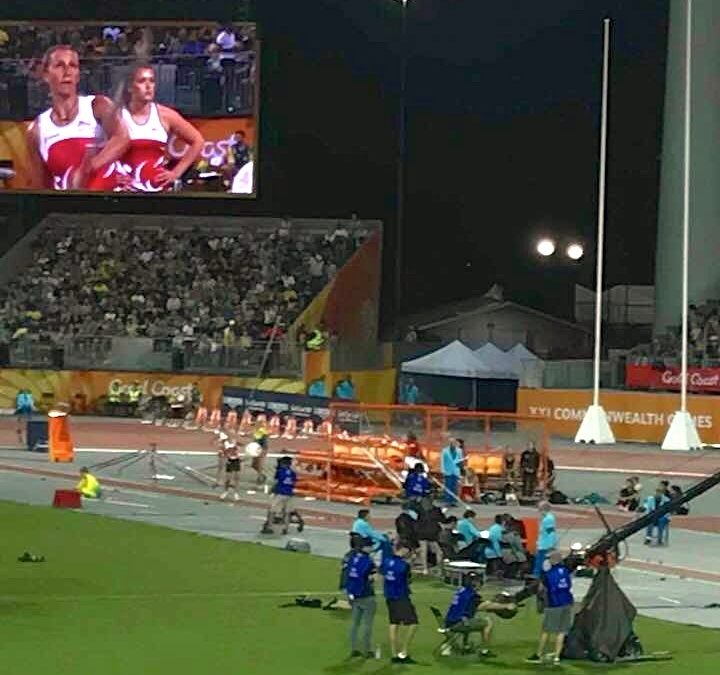 Blackburn Harrier Holly Bradshaw finished 4th in the Final of the Pole Vault at the Commonwealth Games being held on the Gold Coast in Australia. Fourteen athletes contested the Final won by Alysha Newman of Canada with a clearance of 4.75m with Eliza McCartney in second place from New Zealand (4.70m) and Nina Kennedy from Australia in 3rd (4.60m) the same height cleared by Holly who was placed 4th. Coming against the background of a lot of injuries Holly can be proud of her performance here. Sophie Hitchon – Olympic Bronze Medalist from Rio 2016 – competed in the Women’s Hammer Final and although things didn’t go to plan for her as she gets to grip with a new and changing technique, nevertheless, she beleives that her hard work and application of these changes will reap big rewards in the longer run. Both Women were competing on the World stage, in Finals, which is where they both belong. All credit to them for continually competing and maintaining world level standards. Blackburn Harriers are so immensely proud of their achievements. 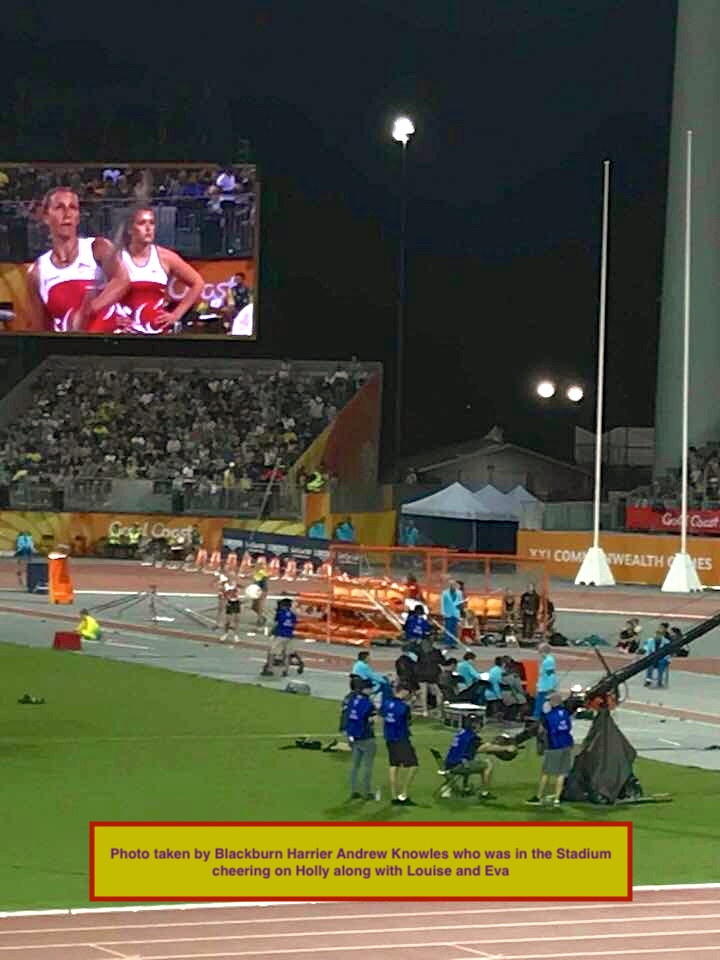 Two hundred and ninety nine runners completed this Race held in the picturesque town of Keswick in the Lake District with Blackburn Harrier – Chris Arthur – coming home to win the Race in a time of 27.38, some two and half minutes in front of the second placed athlete – Paul Graves (30.12). 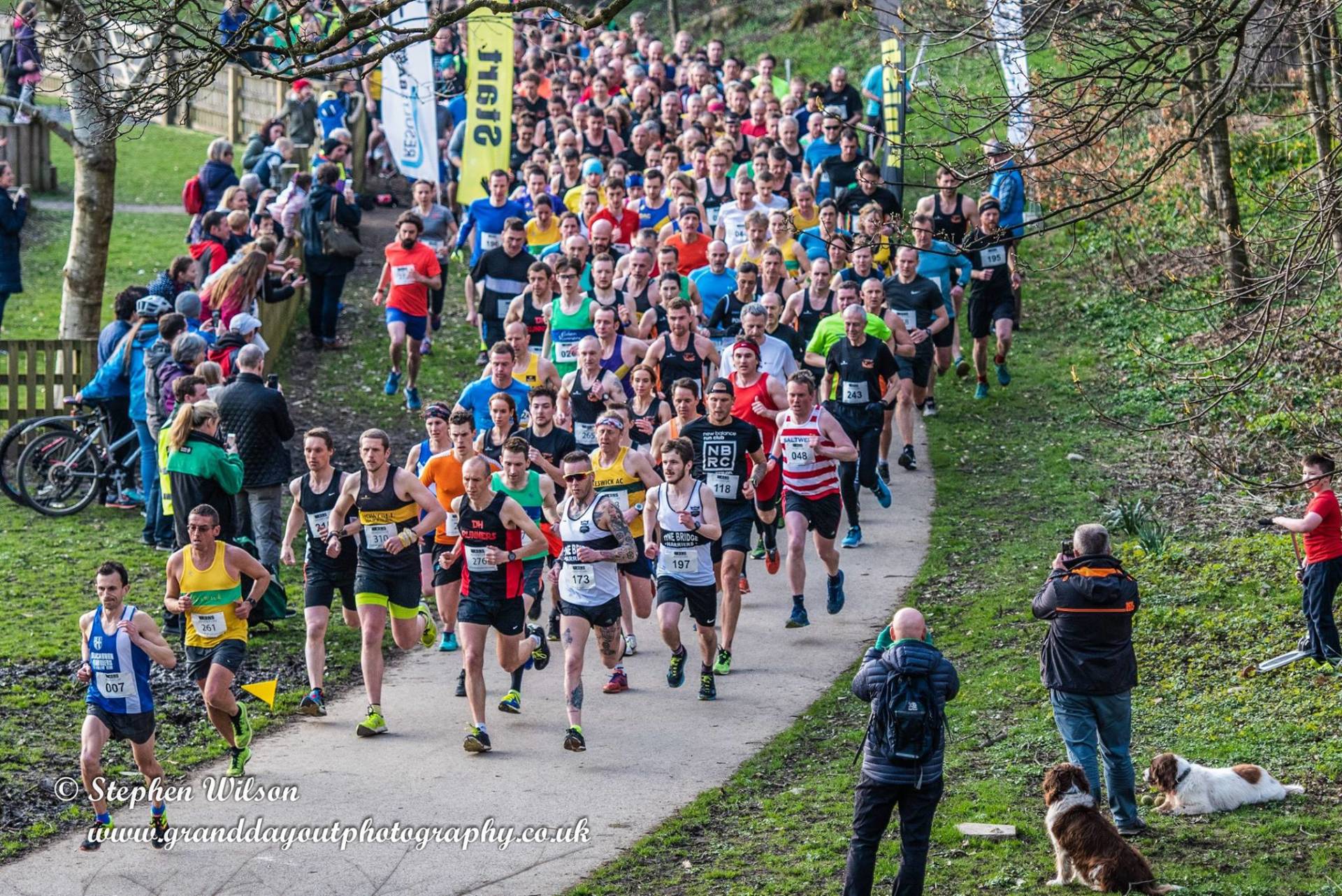 Chris  was very enthusiastic about the Race telling the Club “It’s an absolutely brilliant old school race; a random distance, no road closures, no medals or goody bags – just a good blast around the town of Keswick with a huge number of supporters all along the course to shout encouragement. It’s an undulating route so not the fastest but I can’t recommend it enough for the atmosphere”. 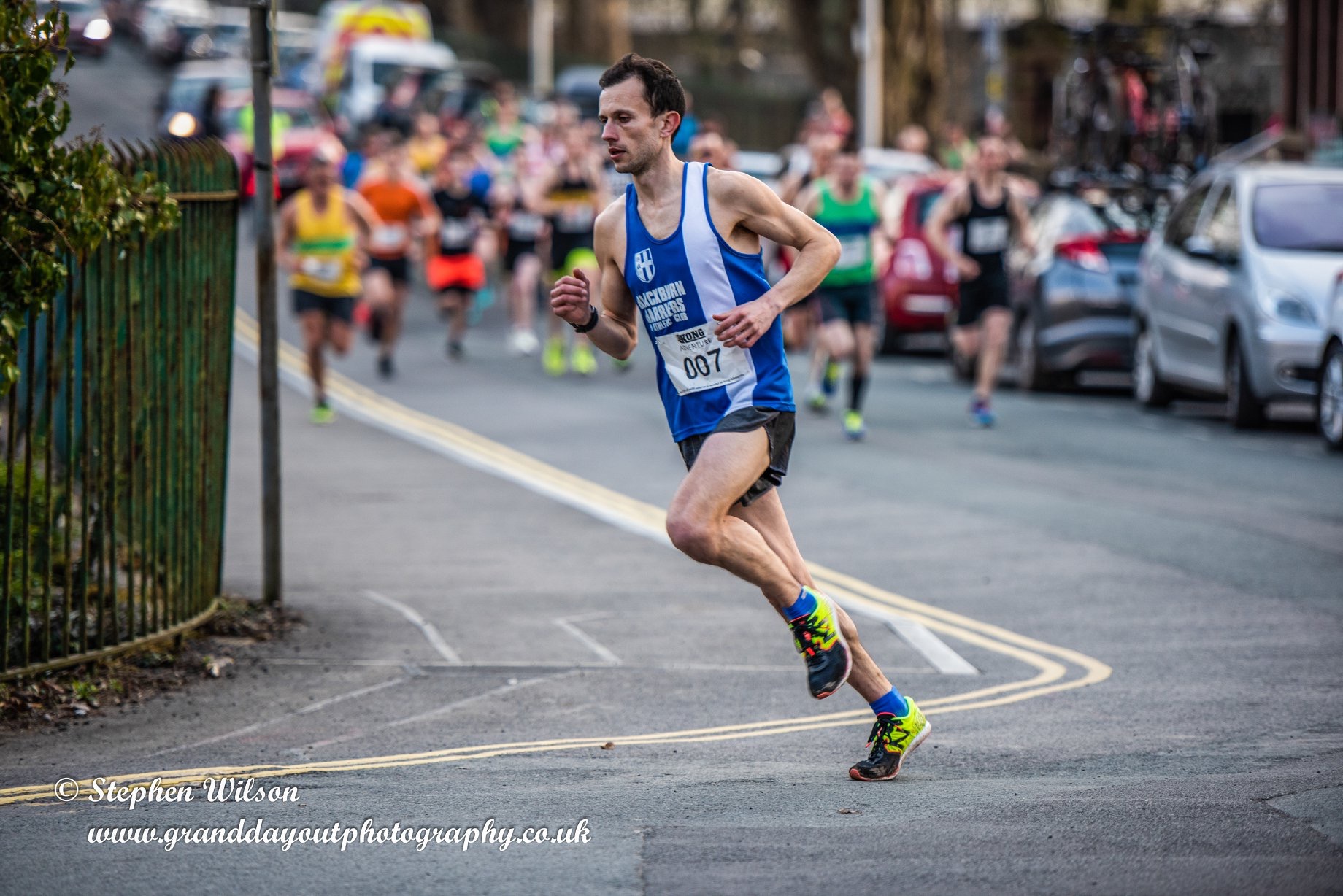 Over three hundred finishers in this Rivington 10 Mile Trail Race won by Tom Carson in a time of 65.41 – and what a run by Blackburn Harrier Victoria Mousley as she won the Women’s Race, coming home in 13th place overall – posting a time of 76.23.

Victoria spoke to the Club afterwards, commenting “I wanted to enjoy this race as I haven’t felt the love for racing and haven’t actually done a race for a good few months with chest infections again. The course was brilliant, trail, fell, hills, a real mixture. I felt good today and ran hard and got a great result”.

Pauline Powell had a great race coming home to win in 35th position overall and clocking a time of 62.23.After the Race, Pauline told that Club that she“Really enjoyed it although wasn’t too keen on the course! Was pleased with how i ran to say its only my third race back!”

U15 Myah Booth is looking to get the English Schools qualifying standard for the 75m Hurdles this year and got her attempts off to a good start at the weekend. On Saturday at the Mid Lancs she won her Race in a time of 12.0sec (Hand timed). The day after she went to Wigan and ran in an electronically timed race where she placed 2nd in a time of 11.7 – just one tenth of a second outside the qualifying standard. Also competing at Wigan was U15 Nicky Saunders in the Javelin finishing 8th with a throw of 21.05m. 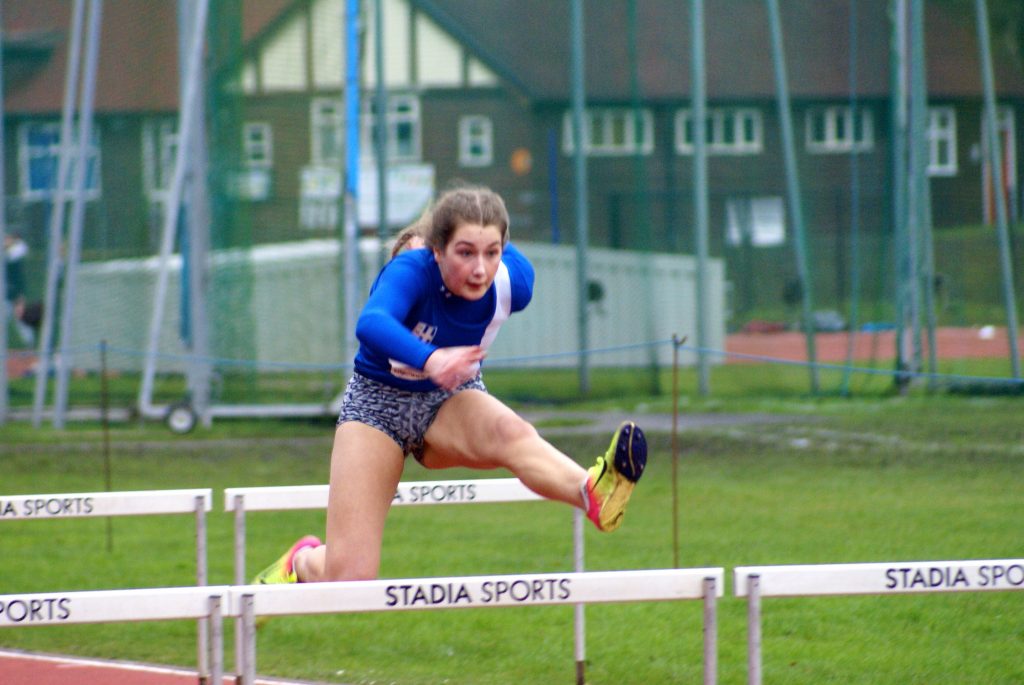 The popularity of Marathons has never been greater it seems as over nine thousand runners turned out at the Manchester Marathon this year – won by International – Shadrack Tanui in 2hr 21.19 some four minutes clear of the second placed athlete – Ben Johnson from Southport Waterloo (2h 25.04)

Three Blackburn Harriers ran on the day with the first one home – V50 Jonathan Bridge whose personal best for the distance is 2hr 51.16 set in 2009. Manchester was his first Marathon since 2015 when he clocked 3hr 17.49 at Chester. At the weekend and three years later, Jonathan ran faster as he placed 997th in a time of 3hr 14.04. V45 Carol Reilly set her PB in London in 2015 posting 3hr 38.49 and here she was, three years later running a time of 3hr 48.27 which is really solid running from her. Last but by no means least came Paulo Sousa who has a 3hr 18 time to his name for the Marathon. For Manchester, he had what might be called, an unusual warm up event for his race. THE DAY BEFORE MANCHESTER Paulo drove to Kent to do the Spartan Event which included the type of events seen in the photos here: 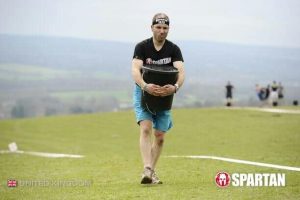 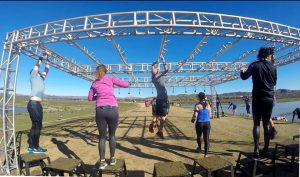 before driving all the way back from Kent the same day to run the Marathon the day after!!  Going through half way in 1hr 34.46 Paulo suffered in the back half and even more so after becoming sick consuming a Gel to try and keep some energy going. In the end Paulo clocked 3hr 47.08, which given the circumstances of the twenty four hours leading up to it, is quite good. 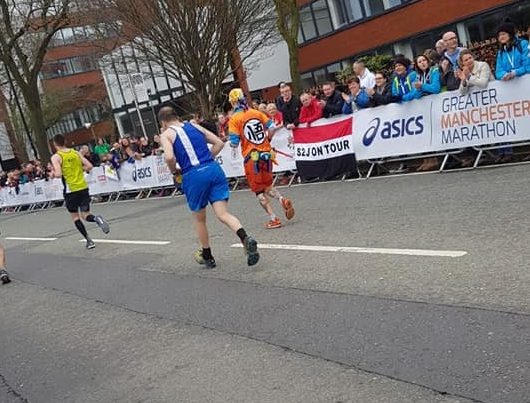 Paul Wilkinson was out in a Triathlon once again – this time in the West Lancs Tri held on Sunday April 8th in Ormskirk. This Triathlon consists of a 400m swim in the pool followed by an 18.5k bike ride and a 5k run taking in the trails around campus before finishing on the running track.

Four hundred and thirty nine finishers in this event which saw Paul come home in 117th spot in a combined Swim, Run, Bike time of 1hr 13.44. 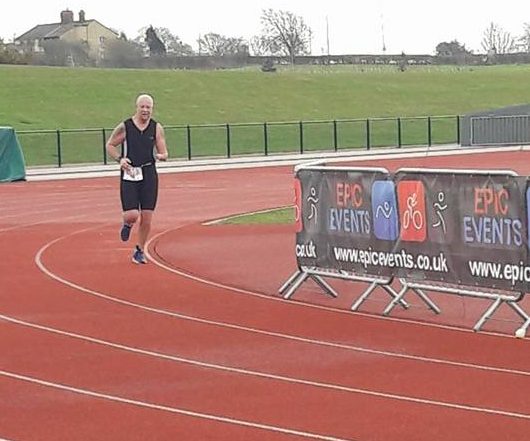 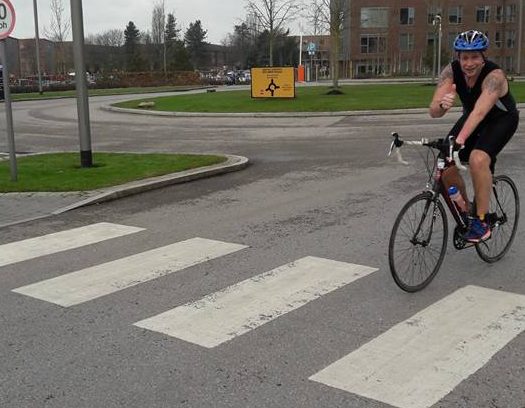