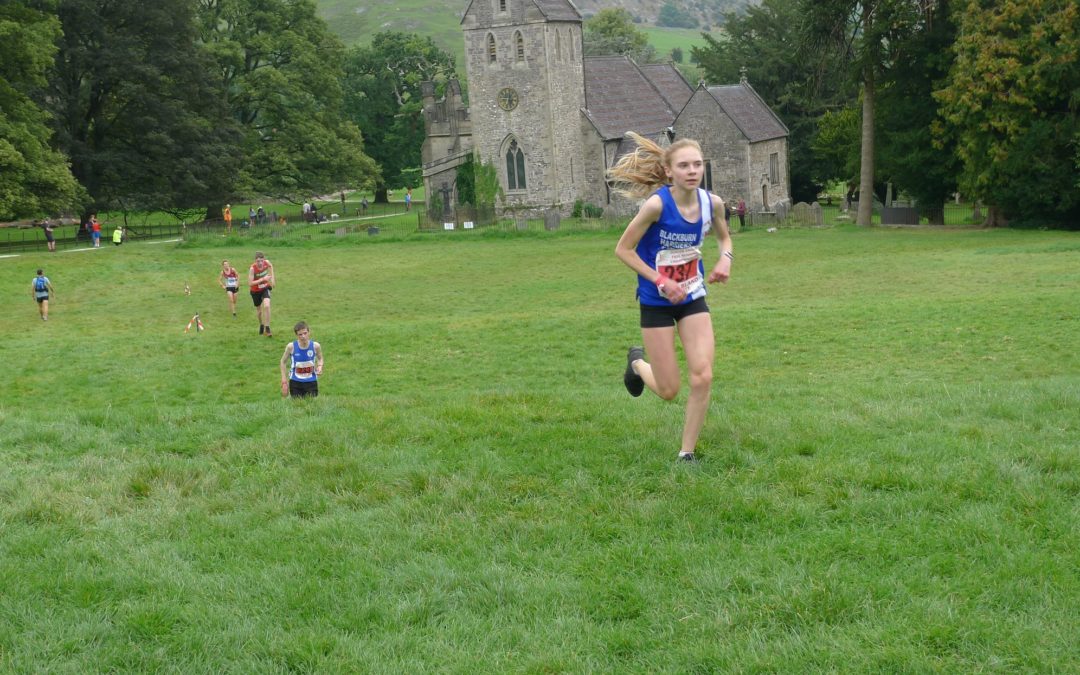 Sunday September 12th saw the final race in this years FRA Junior Championships at Ilam. Isabel Holt, after being part of the Gold Medal winning U17 Women’s Team at the Junior Home International in Ireland the week before, was out again in this race trying to win a third place for the overall series.

In the Race Isabel came across the finishing line in 17th place overall in the joint U15 & U17 Race and 2nd in the U17 Women’s race with a time of 24.43 behind the U17 Women’s winner on the day – Harrogates Eve Whitaker (23.29). Huge congratulations to Isabel who, added the Bronze Medal to her achievements this year, at the English Junior Fell Championships after her result at Ilam in the final race of the Series. A very happy young athlete told the Harriers that she “Really enjoyed all the fell races – a great experience; each one different and each had its own challenges. Can’t believe I got bronze in the English series as it’s the first full fell season I’ve done.” 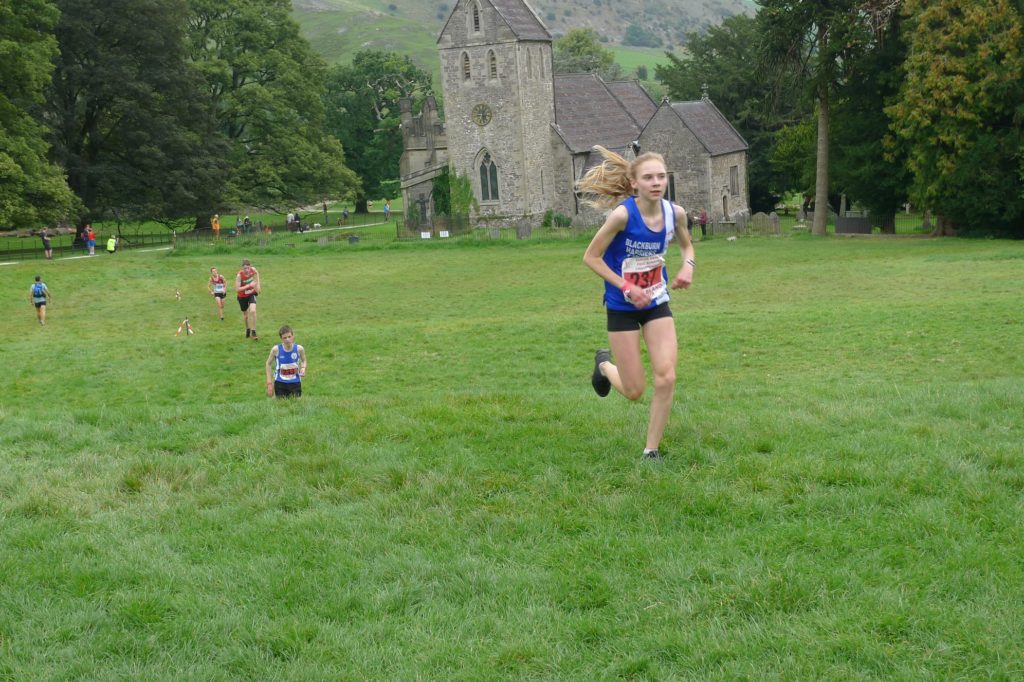 Two hundred and ten runners turned out at this Memorial Race to honour Roh Hill, past winner and revered by everyone in Athletics for his achievements. The race was won by Matlock’s Daniel Haworth in a time of 17.34 with Chorley’s Jacob Deacon in 2nd spot (18.37) and Keswick athlete Tom Day in 3rd (18.57).

In May 2021, Ron Hill sadly passed away and it is fitting indeed to continue to honour his name as one of the most iconic names in Brtish endurance running. Athletics Weekly honoured him with an article in the magazine at the time – outlining his contribution to British, European and World athletics, highlighting all of his successes, which can be read HERE

Blackburn Harriers Jonathan Bridge and Ian Clarkson ran for Blackburn Harriers with Jonathan placing 55th overall in a time of 25.05 and Ian in 114th spot clocking 28.10. Speaking about the race after he had finished, Ian told the Harriers that “The Ron Hill Memorial Rivington Pike Fell Race is an iconic fell race that is approximately 5km long with 800ft of ascent, which has a tarmac start, then it takes you sharply up the tarmac onto the well trodden fell that rises up even sharper !! All the way up to and round the Pike , quickly regain your composure and then eye balls out with what looks like a controlled descent !! Winning time 17:34, my time 27:59. I’ll take that with a big smile.” This latest website report started off with the achievements of 16yr old Isabel Holt winning a Bronze Medal in the Junior Fell Championships and ends with V75 Mike Hazlewood at the other end of the age scale, competing in Sweden where he lives. At the HuddingeAIS organised Swedish Throws Pentathlon, Mike won the competition after expecting the “hammer/weight throwers to dominate – however at the end of the day ”it was a close run thing ” – not that I could run!! I won by 11 points in 3300!”

What is just as remarkable about this, is the background to Mike’s win when taking into account Covid, having to undergo an 8 hour abdominal operation in 2020 plus a hernia operation earlier this year, all of which meant that there had been no possibility of competition for him. This year he did one club comp (hammer, javelin & discus) which went ok but then strained his right adductor in training and coupled with a right hip that does not like him rotating, competition becomes increasingly difficult and hazardous. At the end of the day despite his ’infirmities’ Mike wanted to throw & compete again. “Just do it’ as the Nike slogan says – so I did!” Mike went on to tell us that “It was great to meet a lot of old friends & make some new. The camaraderie of ’Masters’ athletics just gets stronger the older one becomes. I have made New Club records in M75 – I just hope it gives some ’youngster’ an aim to break in the future.” 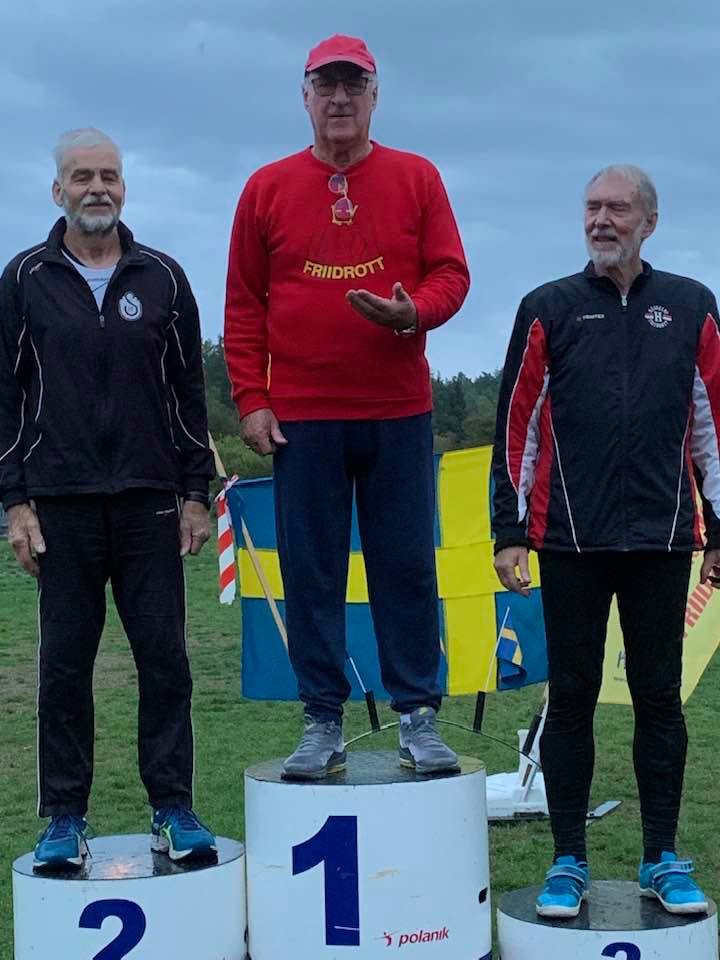