What a great World Championships for Jess Judd contesting the 10000m Finals and then qualifying through the Heats for the 5000m Final. Going into the 10000m Final on July 16th her personal best had been achieved at the British Championships in May as she won the race with a time of 31.22.24 and inside the qualifying time. In the Final Jess ran a staggering new PB of 30.35.93 – a massive improvement of over three quarters of a minute and a time that took her to third on the British all time list behind Paula Radcliffe and Eilish McColgan. Four days later she was running the Heats of the 5000m in what can only described as a furnace with a temperature of 33 degrees. Serious questions have to be asked about subjecting athletes to these temperatures in endurance races. The conditions didn’t stop Jess from qualifying in a time of 14.57.64 – just half a second outsider her personal best. 72 hours later and she was back out in the Final clocking 15.19.88 in 13th place. Two World Championship Finals and a qualifying Heat in seven days is a fabulous performance in the life of an athlete who continues to improve and with little doubt there is more to come.

Jess gave her thoughts on her social media after the 5000m Final about the World Championship experience saying “I knew coming into this 5k with a 10k final and a 5k Heat in my legs would be tough!!!😬😬 I knew I had to try and run a sensible race and try and move through as well as I could, but sadly when it came to pushing on and clawing back the gap with 3 laps to go my legs just weren’t having it!!!! 🙅🏻‍♀️🙅🏻‍♀️ I have loved gaining some experience this week and racing the best people in the world!! It was awesome and I have loved every minute!😃💕 It’s easy to never be satisfied, but after an 11th place finish and 45 second PB Saturday in the 10k, making the 5k final Wednesday with my second fastest time ever in 33 degree heat, and finishing 13th in the 5k final today, I am celebrating this Championships for a little while to come🎉🎉 thanks as ever to the team behind this, it’s been years in the making! Now let’s go and see what else 2022 brings” U20 David Holman got the evening off to a brilliant start as he went in 1500m F Race being paced at 61/2.03. Not hanging about, he went straight in behind the Pacer going down the back straight for the first time and never looked back once the Pacer dropped out, storming home to win by close to two and half seconds in a time of 3.52.87 and a huge new PB by well over four seconds. This run takes David into the top five (5th) in the North West alongside Matt Ramsden (3rd) and a big jump to 33 in the National Rankings. Next up was Matt Ramsden in the C Race featuring 16 athletes and supposed to be paced at 59/1.59 which was a big ask. The Pacer misjudged the first lap and ran 57 with a second lap of 63, Matt going with him and creating a big gap between himself and the rest fo the field, but paid the price of running a super quick first two laps as the field got back to him leaving Matt finishing with a time of 3.56.60 and at number 25 in the National Rankings with his personal best of 3.51.70 clocked in winning the Lancashire Championships. 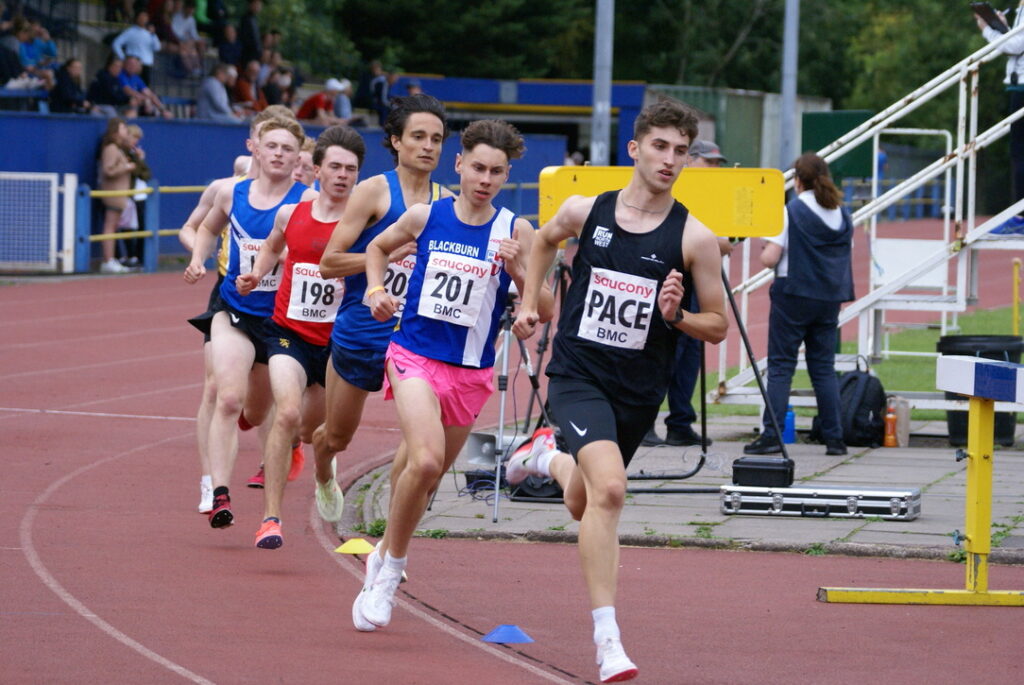 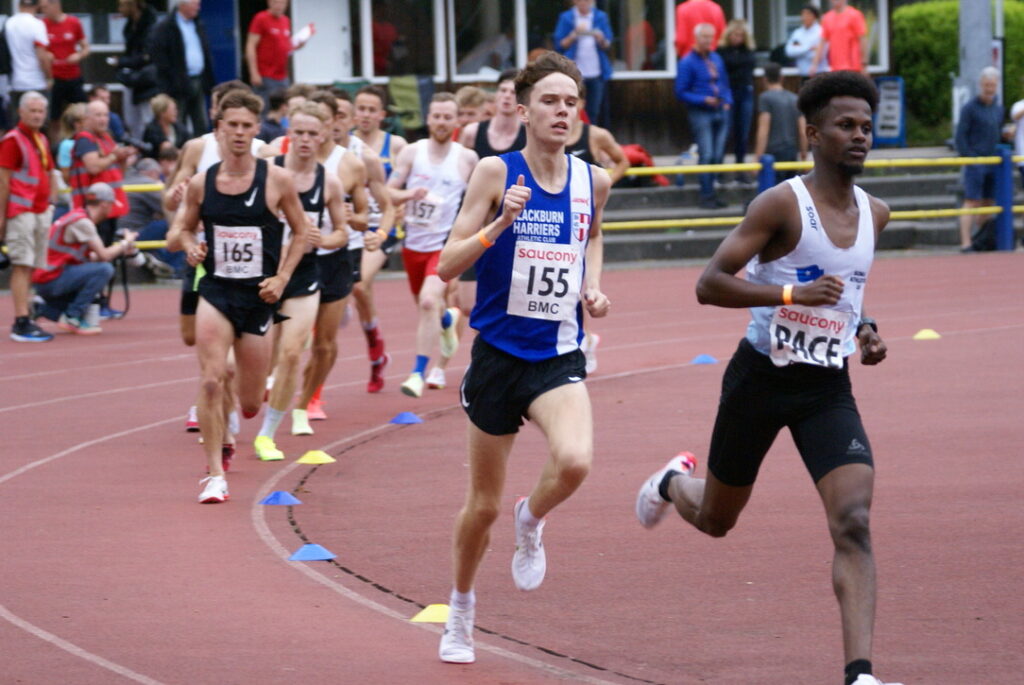 13 athletes in Abigail Stratton’s 1500m Women’s B Race being paced at 69/2.18. Abigail was lining up with a with a personal best of 4.27.99 which she ran at this years English School 1500m Final winning the Bronze medal. Staying close to the leaders the whole way round, she was rewarded with a new PB by over a second in clocking 4.26.74 in 5th spot and moves to number 3 in the North West and number 11 in the National Rankings. 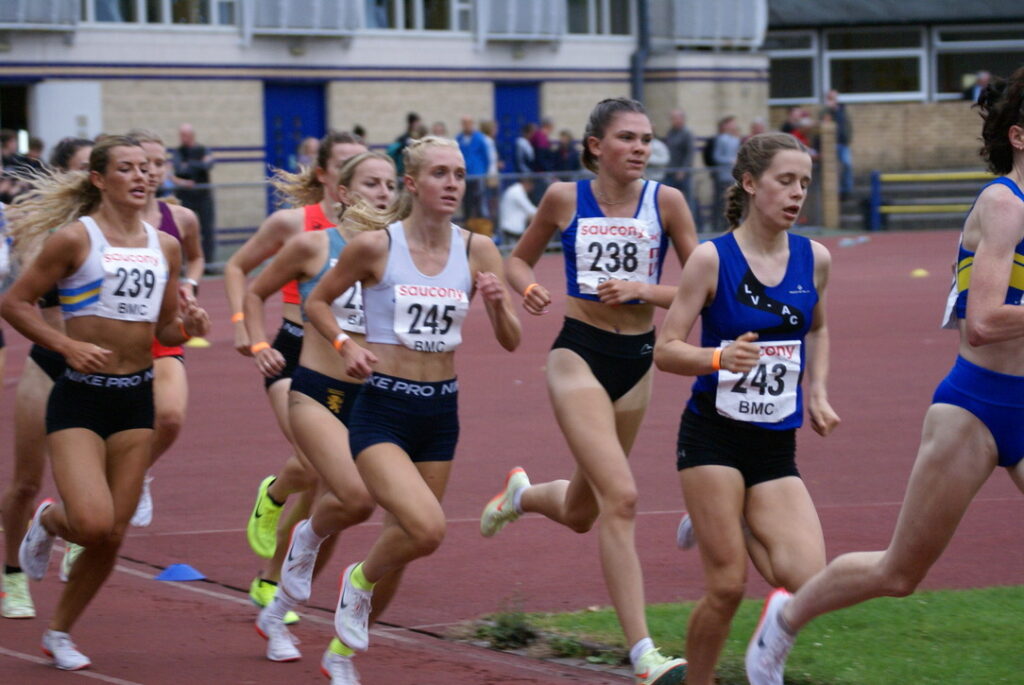 Next up was Daniel Bebbington in the Men’s A 1500m Race being paced at 57/1.55. The race was fast, producing nine new personal bests and two seasons best with Phil Norman winning in a time of 3.39.89. Daniel ran his third fastest time ever for the distance clocking 3.44.90 in 13th spot with three tenths separating the first three. 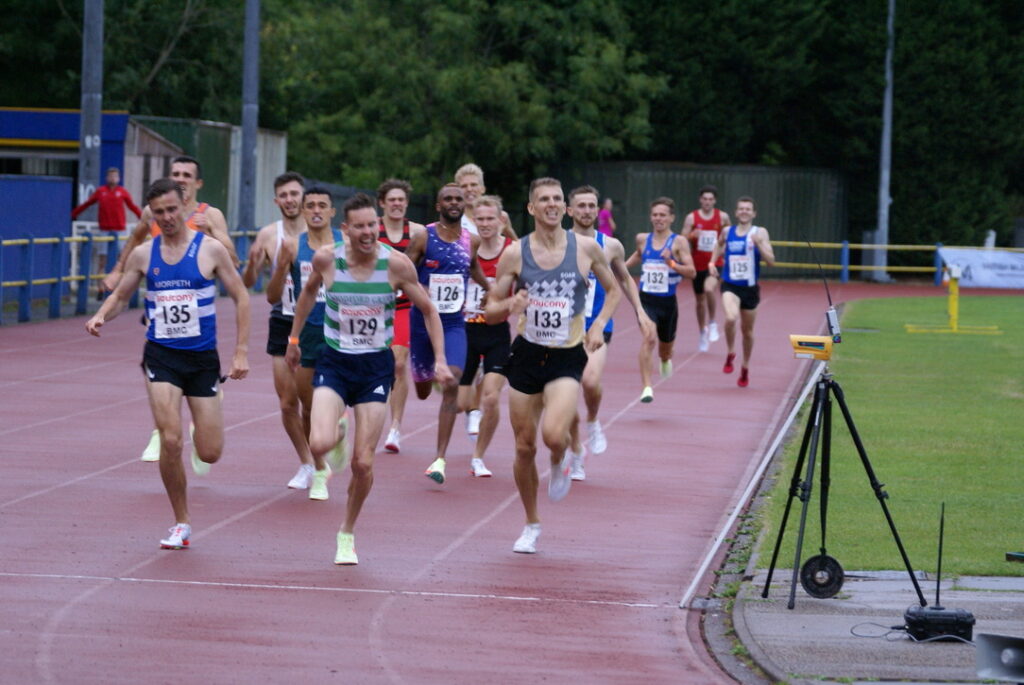 On io the 5000m and first up in the Men’s B Race was Luke Betts among the 15 athletes lined up at the Start and being paced at 68 seconds.This was Luke’s 4th 5000m race of the season and his first since winning Bronze at the Northern Championships on June 18th at Liverpool (14.47.14). The race was set up early on by the Pacer who was looking to draw Scottish athlete Christian Graham round to a new personal best and in so doing split the field between the front two – the Pacer Matt Clowes and Christian Graham – and the rest of the field. Luke never lost touch and finished in 3rd place with  time of 14.40.37. In the A Race Rob Warner and Tim Raynes were among 20 on the start line in a race which eventually came down to four contesting and in the latter stages saw Newham’s Jacob Cann win by over three seconds (14.01.18) from Alfie Manthorpe in 2nd (14.04.57) and Lewis Jagger in 3rd (14.04.93). Rob made his way through the field to finish very strongly to take 8th spot in a seasons best time of 14.17.36 as Tim came home in 15th place clocking 14.38.59. 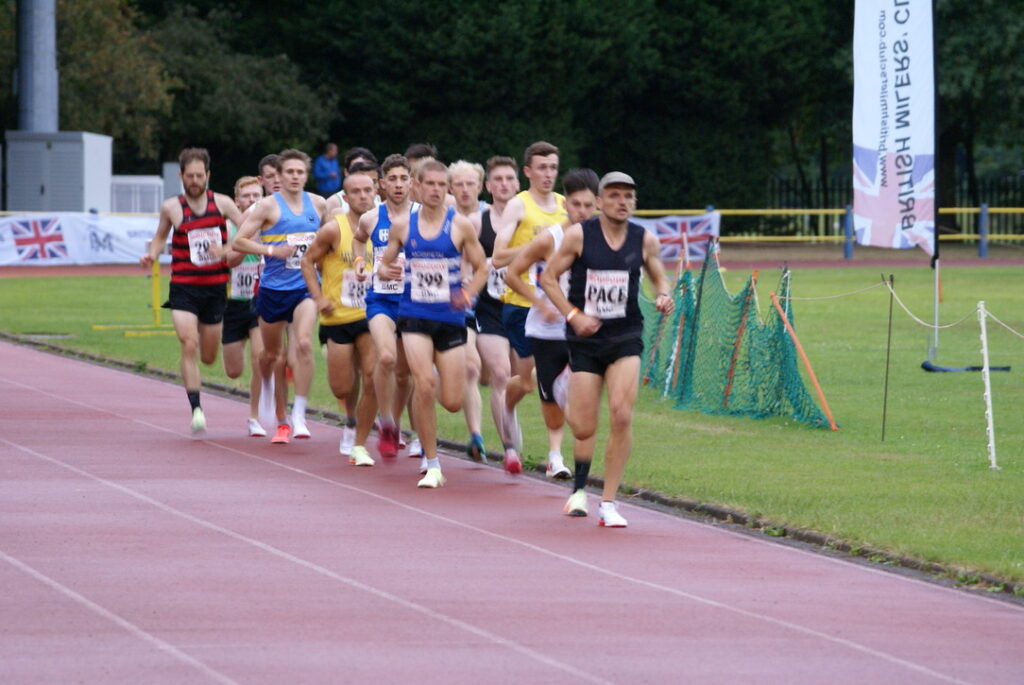 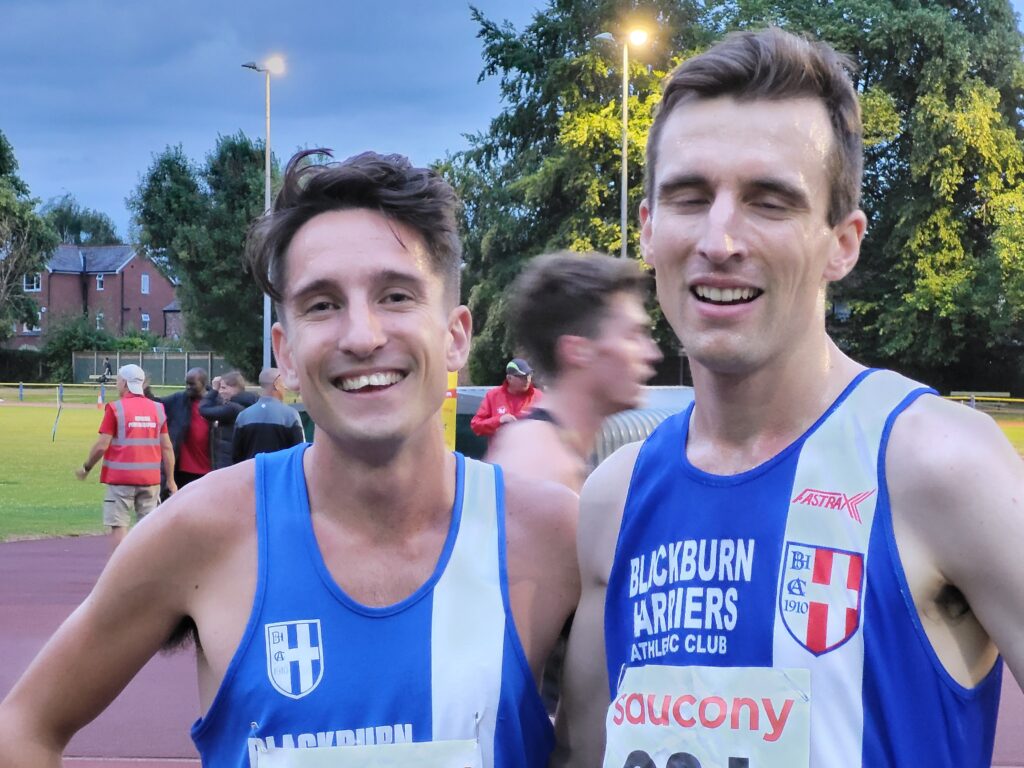 U15 Matthew Smith was at the Hetton Tristar and Youth Triathlon — (RESULTS) — last weekend in a mixed field of 37 athletes – 23 male and 14 female. Matthew came home in 6th position overall – clocking times of 5.55 for the Swim, 12.55 for the Bike and 6.50 for the Run – finishing with a combined time of 26.37. Matthew’s next Triathlon race will be in the North East in August competing for the North West in the Inter-Regional championships on 20/21 August, in both individual and relay events, with the swim taking place in the North Sea! 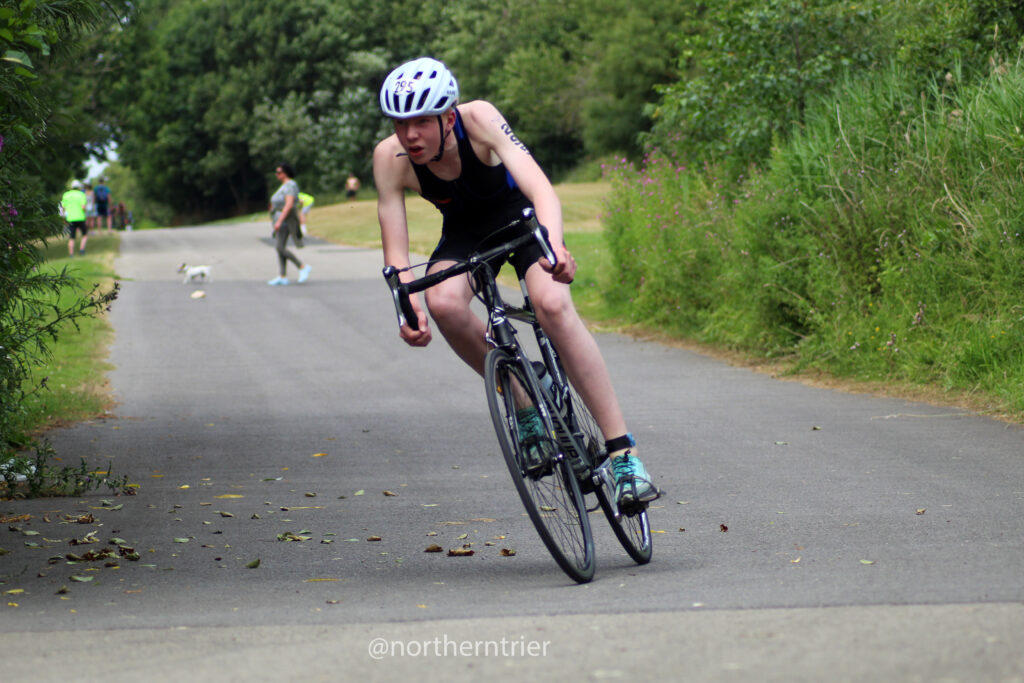 Matthew Smith on the Bike and the Run 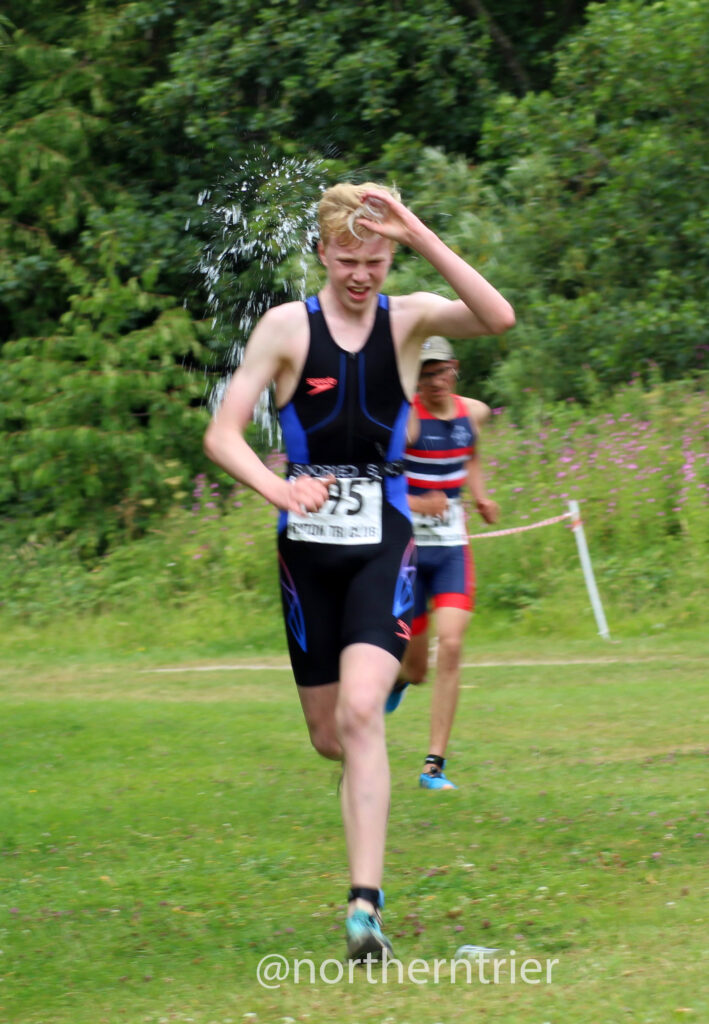 Out in the country with a difference, this time with Joe Bridge at the THE TOLKIEN TRAIL RACE ROUTE run over a distance of 11k and with 528 ft of elevation. The race website paints an enticing picture, describing the route as “Starting on the Avenue of the stunning Stonyhurst College, where Tolkien himself spent time and wrote parts of the Lord of the Rings (and even taught a few lectures). You’ll meet a farm track which will bring you to an enchanting woodland. Here you’ll descend forest steps and cross an old stone bridge, leading you to the River Hodder. After a brief road crossing you’ll pass the Cromwell Bridge (built in 1562) leading you to the trail along the River Ribble where you’ll see a quite breathtaking aquaduct (built in 1880). Back through woodland, you’ll run through the old finish field in the field (Mount Doom..) behind the Shireburn Arms, before racing back through the village and down the avenue returning to Stonyhurst College, having enjoyed the best of what inspired the creation of ‘Hobbiton’ in the tales.” 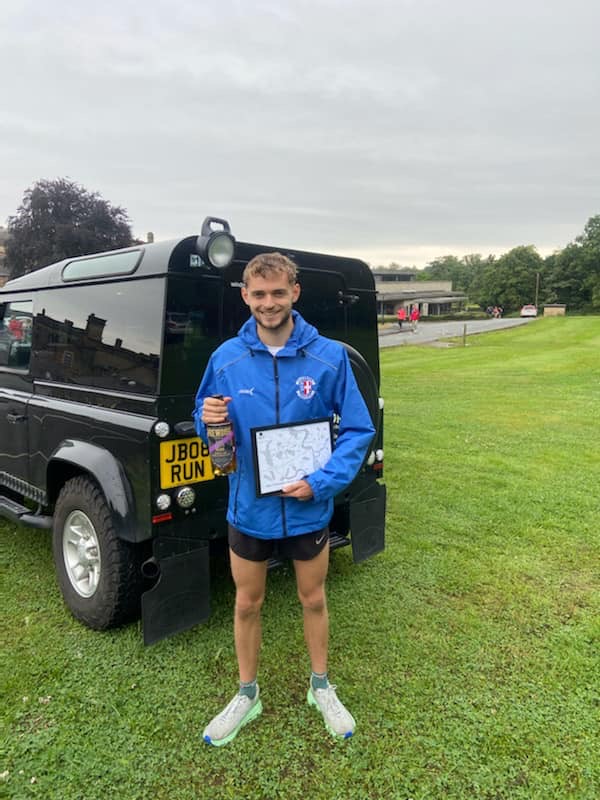 Joe Bridge with the winnings

U13 Alex Rothwell has been racing a lot lately and has been improving all the time. His latest race saw him at the Jubilee Street Series Race 3 on Wednesday July 20th — (RESULTS) –……….Alex finishing 6th overall and 3rd U13 with a time of 5.50 for the one mile course.

Alex and his Trophy