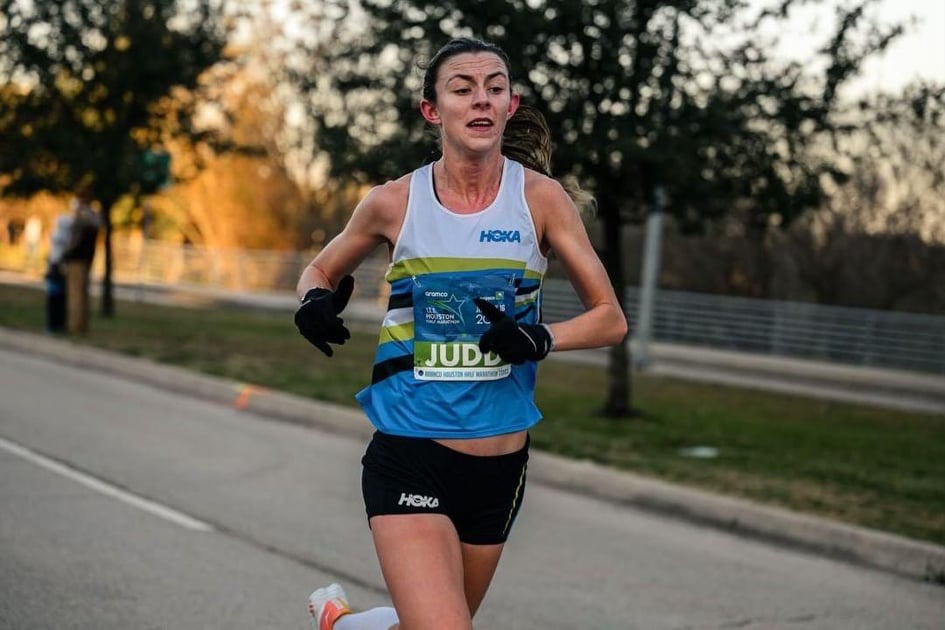 What can you say about Jess Judd? After competing against the worlds best in the Tokyo Olympics over 5000 and 10000m last year she is starting 2022 with the aim of competing at the Commonwealth, European and World Championships. In this huge year for global championships Jess opened up her 2022 campaign by posting the fourth fastest Half-Marathon time of all time for a British female athlete. Only Paul Radcliffe, Liz McColgan and Eilish McColgan have ever run faster. The Race was won by Kenya’s Vicoty Chepngeno in 65.03 followed in 2nd place by Sara Hall with a new US record of 67.15, South African Dominique Scott in 67.32, Fiona O’Keefe in 4th (67.42) with Jess in 5th place running 67.52 in her debut over the distance which is a fabulous achievement.

As modest as ever, one of her great attributes, Jess spoke to the Harriers after her Race telling us “I am really happy with that, it was a bit of a gamble for me today, I knew it was fast but I had to go with it or I risked being on my own! I had a tough couple of miles at 10 and 11 but am really proud of how I dug in and got back on track and finished strong! I’m so so happy and its just been a really good day!!! 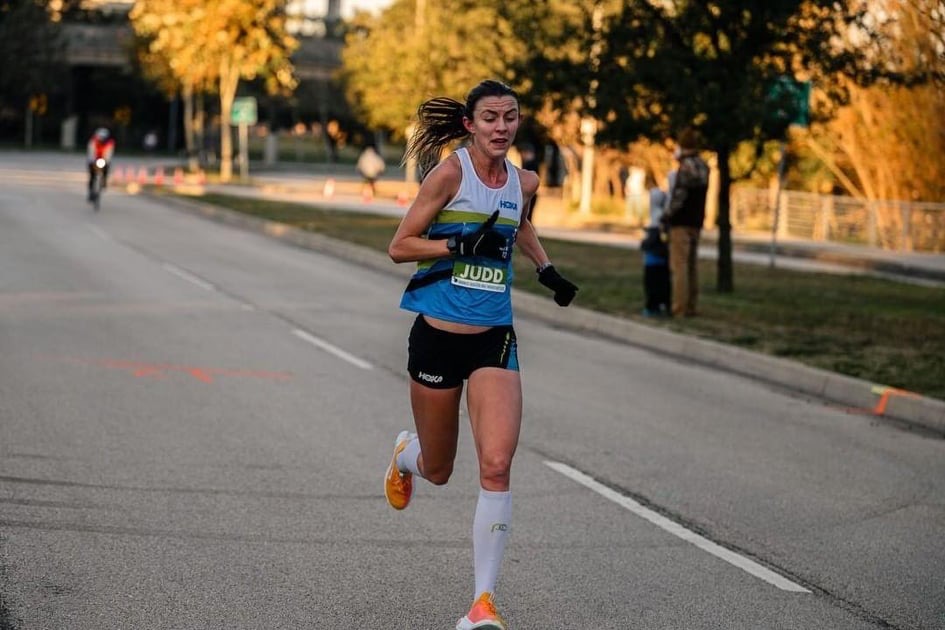 Blackburn Harriers athletes Dominic Walton, Matt Ramsden, Ben Boocock, Poppy Preece and Thomas Monks were all in action over the weekend at the Northern Indoor Championships held at the EIS Sheffield.

Dominic Walton has had a great start to his 2022 Indoor season with three races over 800m, recording wins in each one of them. His first race was at the Sheffield BMC on January 9th which he won in 1.53.42. His second race was the semi-final of the 800m at the Northern Champioinships which he won in 1.57.96 going on to post a faster time in the Final – 1.56.79 – which won him the Gold Medal from Gateshead’s David Race in 2nd (1.56.97). A happy athlete spoke to the Club after receiving his Gold Medal telling us “It was another very tactical race, I was tripped at the break point and almost fell less than 100m in. I was a bit concerned coming into the final that my legs felt heavy from my heat 3 hours earlier. I decided to go earlier this time and took the race on moving from 3/4 to the front with 200m to go; normally I don’t like leading from that far out but I didn’t want to leave it to chance on the back straight. I was the first to kick and I pushed so hard that with 100m to go I was regretting how hard I pushed. Luckily i managed to swim my way across the line for the win.” 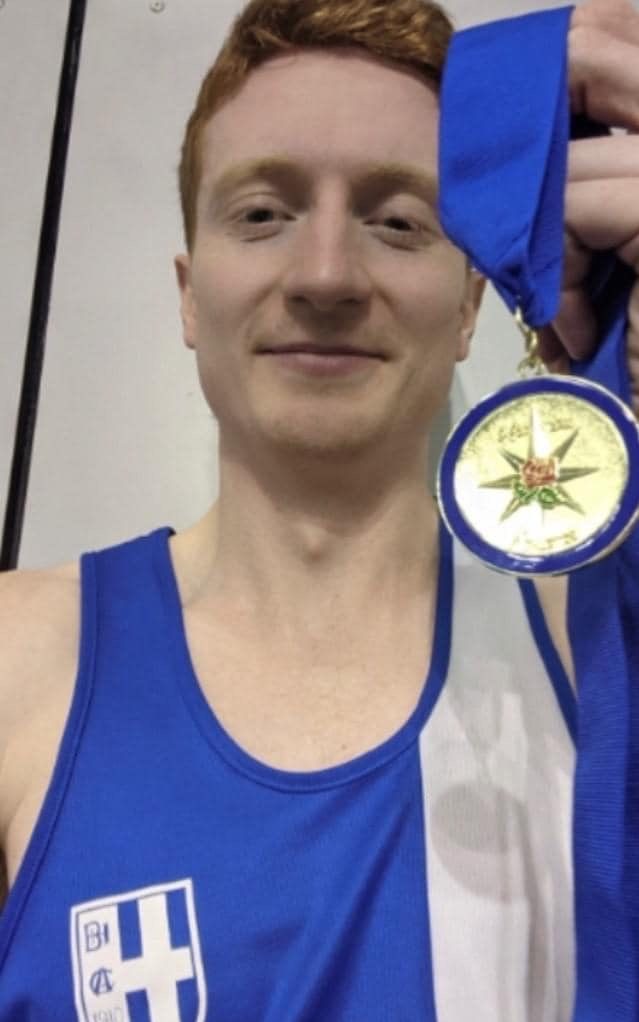 U20 Matt Ramsden finished 2021 in great form – winning the Blackburn Runthrough 10k in 31.24 followed by a very impressive 14th place at the Club’s Ribble Valley 10 Race on December 27th where he set a new personal best of 30.24. Having had to miss the Lancashire County Cross Country Championships with illness he entered the U20 3000m race at the Northern Championshiops and recorded another win to take the Gold Medal in a time of 9.11.82 in what his Coach – Noel Finucane – described as a “mature run race“.

Ben Boocock is in his first year as an U20 and opened up his 2022 Indoor season with a 9.37 clocking over the 60m Hurdles at Sportcity on January 9th. Here at the Championships, Ben improved on that time by close to three tenths as he took 4th place in the Final with a time of 9.10 and afterwards, told the Harriers “I was pleased with my performance at the Northerns with it being only my first year and second race as an under 20, but I believe I can still improve on that time. So I’m looking forward to getting more chances to race again this season.”

U20 multi-eventer Poppy Preece has been really busy in January. Going into the Northern Championships where she contested the 400m, Shot Putt and High Jump, she had competed at the England Athletics Senior & U20 Combined Events Championships recording three personal bests in High Jump, Long Jump and Shot Putt followed by an outing at Sportcity over 60m and 200m. At the Northern Championships Poppy took on the 400m and Shot Putt on Saturday placing 6th in the 400m Final with 65.16 at her first ever attempt over the distance and finished 8th in the Shot Putt with 7.77. On the Sunday she took on the 200m and High Jump placing 4th in her 200m Heat in a time of 28.99 and clearing 1.50m in the High Jump in 5th place in the Final. When the weekends events had finished, Poppy shared her thoughts about the Championships with the Harriers commenting “It was an honour to compete in such a high calibre field with so many highly decorated athletes. I knew it was going to be tough but I really enjoyed the experience and I’ve learned lots to improve my performance in future competitions.“

This popular local race helps to raise funds for East Lancs Hospice, an organisation that is held dear by people in this part of the world. The race was sold out and featured three hundred and eighty five runners. Eleanor Bolton won the race overall in a very good time of 34.06 with Joe Bridge in 2nd spot running 34.31 and unattached Ben Walmsley in 3rd (34.58). The course isn’t that easy and times reflected that as Ryan Bradshaw took 6th place overall in 36.30. Speaking to the Harriers after the race Joe told us that he was “Very pleased with my first race of the year having missed various races over Christmas through injury. I was going into it thinking I’d be happy just to get round injury free so to have a good race was a bonus. Hoping to kick on and have a good year of developing further down at Harriers.“ Ryan also commneted on his Race saying “It was my first time running this race , but in good weather conditions I really enjoyed it. Happy with my run out on quite a tough course (plenty of mud in places!), and well done to Joe getting 2nd place.“ This race is run over 6.8 miles and 1200ft and organised by Wharfedale Harriers. Helen Leigh was out again on the Fells having another very good run to place 39th overall and 3rd Woman on the day in a race won by Ilkley’s Jack Cummings in 47.56. After she had finished Helen commented on her day telling us that she hadn’t  “done the Stanbury Splash since 2014 so it was awesome to have a strong run and finish 3rd with a good battle with the runners around me. Finally persuaded @lizzo36 to do a fell race so she dropped herself in at the deep end and had a great first run

. Thanks Wharfedale Harriers for a top race”. 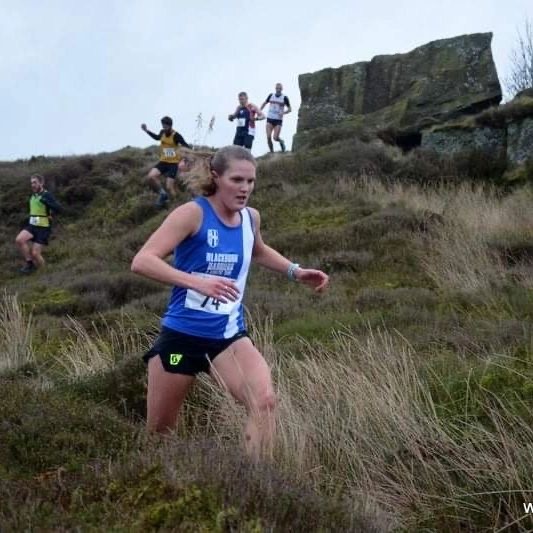