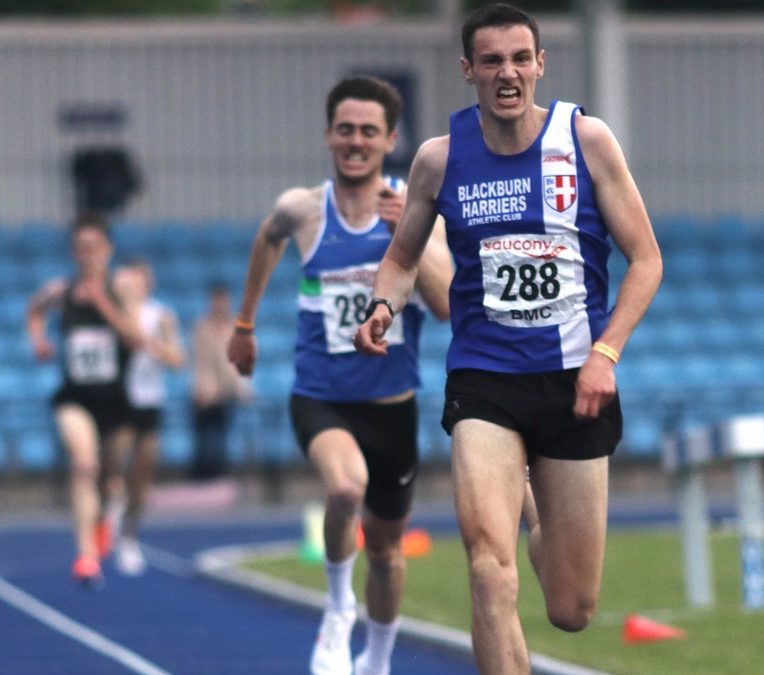 Following her brilliant results in the US recently where Jess achieved the Olympic qualifying time for 5000m and was less than a second off the qualifying time for the 10000m, she dropped down in distance, taking on the 1500m and demonstrating the current form that she is in. Not waiting around too much for the pacemaker, Jess soon took over and ran solo and never let up, winning the race in a time of 4.07.92 with Wakefield’s Lucy Robinson in 2nd (4.17.52) and Basildon’s Gemma Kersey in 3rd (4.17.67). 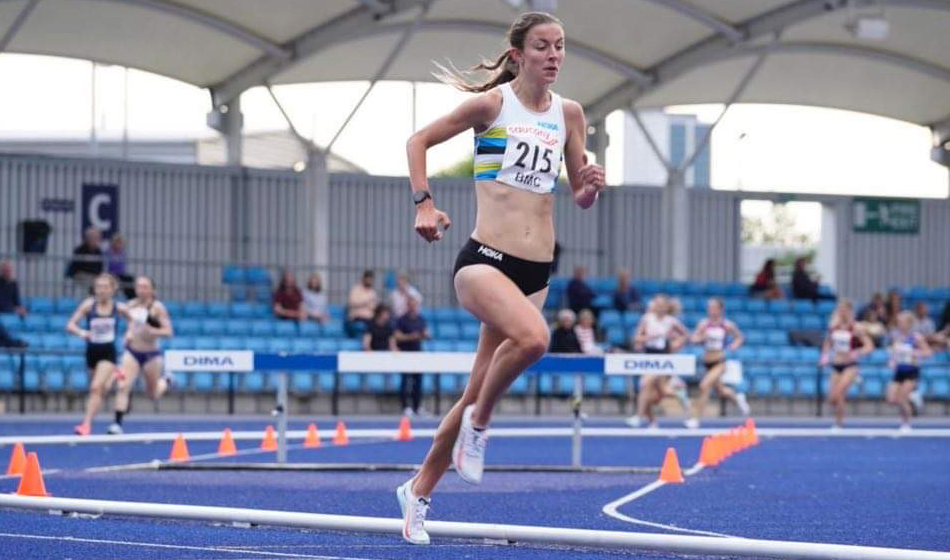 On to the 5000m where Callum Davidson, Tim Raynes and Ben Fish all went in the B Race. Last time out over the distance, Callum clocked 14.39.06 at the Stretford BMC on May 8th which itself was a new personal best by some half a minute, a race which was his first time at the distance since 2018. He came into this race on the back of another big new personal best after winning the the BMC 1500m at Stretford on May 18th, posting 3.54.75. Callum set off well and worked his way through the field until it was just down to him and Max Milarvie over the last couple of laps. With 300m to go, Callum went for it, but Milarvie didn’t drop and it was a real battle until coming into the home straight where Callum opened up a winning marging to take the win in a new PB time of 4.09.81 – an improvement of twenty nine seconds – with Max Milarvie in 2nd spot (14.10.91) and Stockport’s Tom Moran in 3rd (14.16.37). The first six athletes all posted new personal bests in this race with nine in total from the nineteem strong field. After the Race, a very happy Callum spoke to the Harriers about the evening saying.“Still in disbelief over the race last night. It was fantastic to have a strong Blackburn contingent present at sports city and I was delighted to get the recognition at the BMC for Blackburn and bring home the victory and run a new PB of 14:09.“ 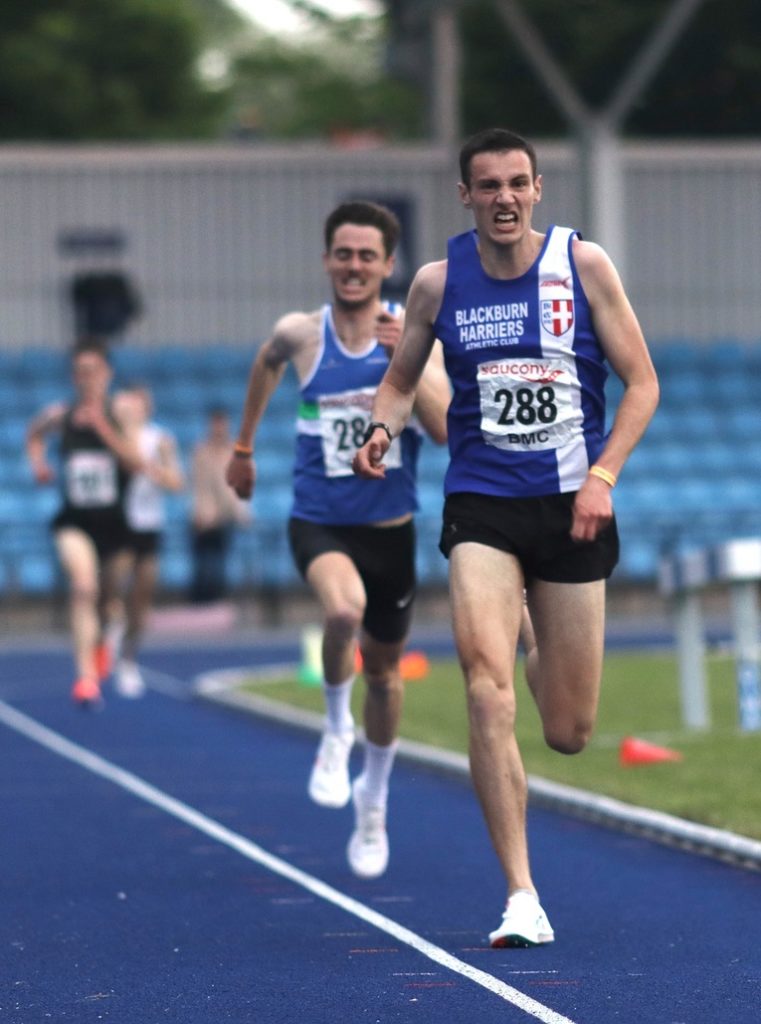 Tim also has a really good run as he came home in 11th place with a time of 14.43.93, just two seconds outside his personal best in his first track race for quite a long time, way back in August 2019. Speaking to the Club after his Race, Tim commented that “It was great to be back racing on the track for the first time in two years. Reasonably pleased with my run … decent starting point for the season, hopefully more to come in the next few months. Well done to all the other Harriers – particularly to Callum, who had a superb run to smash his PB and take the win.“ 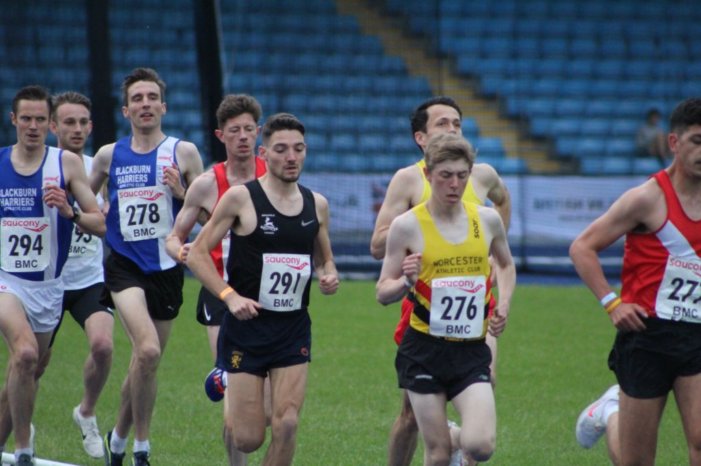 Ben, like Tim, last set foot in a Track Race, way back in August 2019 and came into this race on the back of a 10k win on a very tough and wind affected Race in Heaton Park, just the week before. It was another good run from Ben as he finished one place behind Tim in 12th place running a time of 14.45.90 and afterwards, as always with Ben he was quick to highlight the runs of other Blackburn Harriers telliing us “A storming run from Callum to run 14:09. I was fairly satisfied with my race. It felt fast right from the start, definitely felt a bit race rusty as far as track running goes. Had a great battle with Tim, Andy Norman and Karl Darcy which helped get me to a 14:45. Well done to Jess on her fine win and Rob who battled it out in the A race“. 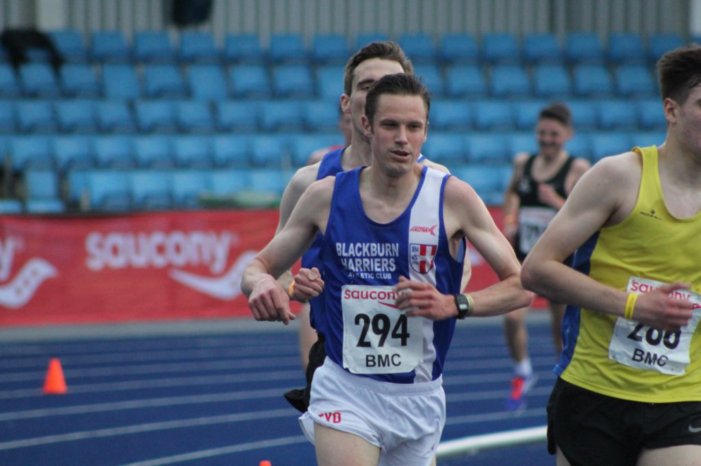 Rob entered the A Race which was won by Derby’s Hugo Milner (13.52.63) with Ireland’s Eoin Everard in 2nd (13.58.47) and Sale Harrier’s Nigel Martin in 3rd (14.05.33). This was Rob’s second track race of the year – he had clocked 8.18.73 in a 3000m BMC Gold Standard Race in Birmingham on the 21st April. Rob came home in 11th place with a time of 14.31.62 and told the Club post race “Well done to everyone, some greats runs and so good to have so many of us at the BMCs. Similar to Ben in that I felt a bit race rusty over the 5k and i’m probably not quite sharp enough to go at 66/67s just yet so it was a battle in the 2nd half of the race! Reasonably pleased to get a marker in and hopefully things will progress down to my pb later in the season”. 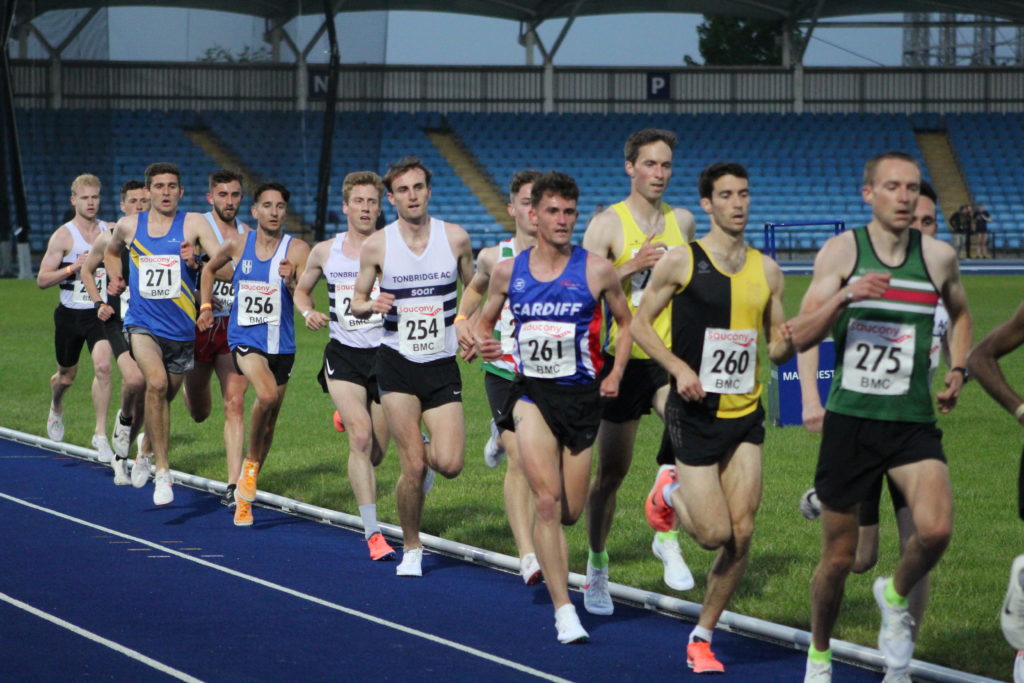 Since February this year, Holly Bradshaw has competed four times Indoors, winning in France on February 6th with a clearance of 4.85m, followed three days later on February 9th with another win in France this time clearing 4.73m. On March 6th she placed equal 3rd at the European Indoor Championships with 4.65m. So it had been some two and half months since her last competiton when she made the trip to Doha for the latest Diamond League Fixture for her first Outdoor meeting this year.
Diamond League Results
Holly Bradshaw Video
The field in Doha was top quality with some of the best women Pole Vaulters in the world there to battle it out. Holly passed the opening height of 4.35m before going on to record first time clearances at 4.50m, 4.64m and 4.74m and at that stage was joint first with American Katie Nageotte. Holly missed out at at 4.84m whereas Nageotte cleared first time and Sandi Morris cleared on the 2nd attempt, neither athlete being able to progress from there which meant that Holly placed 3rd (4.74m) with Nageotte in 1st (4.84m) and Morris in 2nd (4.84m). Holly spoke to the Harriers when she got back commenting on the event “It’s a great way to start my outdoor season. I was really nervous coming in as it was my first outdoor meet since last year but I had so much fun and learnt a lot throughout the meet as to where I am. It was a privilege to be a part of such a good competition. The field was good going in but to be a part of the 2nd best womens comp ever was special.” 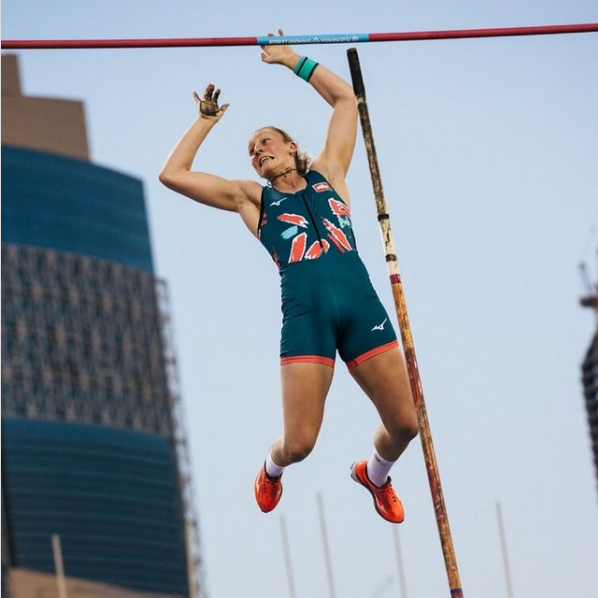