Jess Judd had a fabulous run on Saturday night May 14th in the British 10000m Championships hosted at the brilliantly organised Night of the 10000m PBs. The excitement generated on the night itself was palpable even when being viewed on television so big congratulations to the organisers. Needing to finish in the top two and already having the qualifying time, the race unfolded in a dramatic way with Samantha Harrison taking the race on and making a serious bid to try and win it. Jess stayed with the five front runners and then with around 1k to go she pulled alongside Harrison and made her own successful bid to win the race with a fabulous 65 second last lap finish, closing with a smile on her face as she came home in a World Championship qualifying time of 31.22.24 followed by Amy-Eloise Markove (31.25.57) and Samantha Harrison (31.30.63).

On the same evening the BMC Grand Prix Series was taking place in Birmingham and three Blackburn Harriers were in the line ups, Callum Davidson and Tim Raynes in the 1500m and Daniel Bebbington in the 5000. Callum’s Race featured twelve athletes, the race being won in 3.48.68 by Radley athlete Rown Miell-Ingram. This was Callum’s first 1500m race of the season finishing 9th in 3.53.00, telling the Harriers later that “A season opener is just a marker in the sand to show where you are at and that’s all Saturday’s BMC 1500 was. I was quite shocked to be off the back going through 400m when the pacemaker was down to run 61 but when the timekeeper called 59 for the pacemaker it made everything quite clear. The pace slowed from 4-8 which then allowed me to get closer to the front but as with Tim’s it was a chaotic race with one lad getting thrown on the infield after 1km and lots of pushing. I hit the front with 500 to go and kept the pace honest but ultimately faded drastically in the last 2. I never felt comfortable in the race and felt like after my start I was constantly chasing on the back foot but it’s all good experience. Onto the 3000 on Tuesday where I will thankfully have coach Nick alongside me to calm and keep it honest.”

Tim Raynes was unfortunately missed off the results of his 1500m race. He spoke to the Club about the evening and his race commenting that  “It was a bit of a messy race for me. I didn’t get out very well, but got onto the back of the pacemaker coming through 400. Unfortunately the pace then dropped significantly, which caused a lot of bunching up. Got tripped from behind coming up to 700, so ended up having to overtake the pacemaker. Couldn’t finish quickly enough to compete for the win, but gives me a marker to build on and hopefully sets me up for a decent 3k on Tuesday. Good to see Dan make his debut in a Blackburn vest.” As Tim said, it was good to see Daniel making his debut for Blackburn Harriers in the 5000m and his first time over the distance as well running a solid race in 14.31.86. Tim in 4th at this stage of the Race

Blackburn Harriers – Jack Hindle – racing for RAF Triathlon – is in great form as he displayed at the Outlaw Triathlon on May 15th — (RESULTS) — an event comprising a 1.2mile swim, 56 mile bike ride and finished with a half-marathon. Jack finished in 8th place overall and 1st in his age category (25-29yrs) in a combined time of 4hr 01.50, his Swim 25.18, on the 56mile bike ride he posted a time of 2hr 10.30 followed by an 80.42 run in the half-marathon. Post race, Jack commented on his social media page that “Swim and bike went to plan and I was up there with the front pack. Legs didn’t quite have what it took to hold on for Sub 4 and a top 5 finish. Some fierce competition out there today! As an athlete, your always wanting more and Sub 4 is the goal now. But now to rest up and take it easy for a few days. Special mention to my amazing Girlfriend Hannah Dodwell who also raced in her first half distance today. You were amazing. Thanks to the race organiser and everyone who supported today, can’t wait for the next one.” 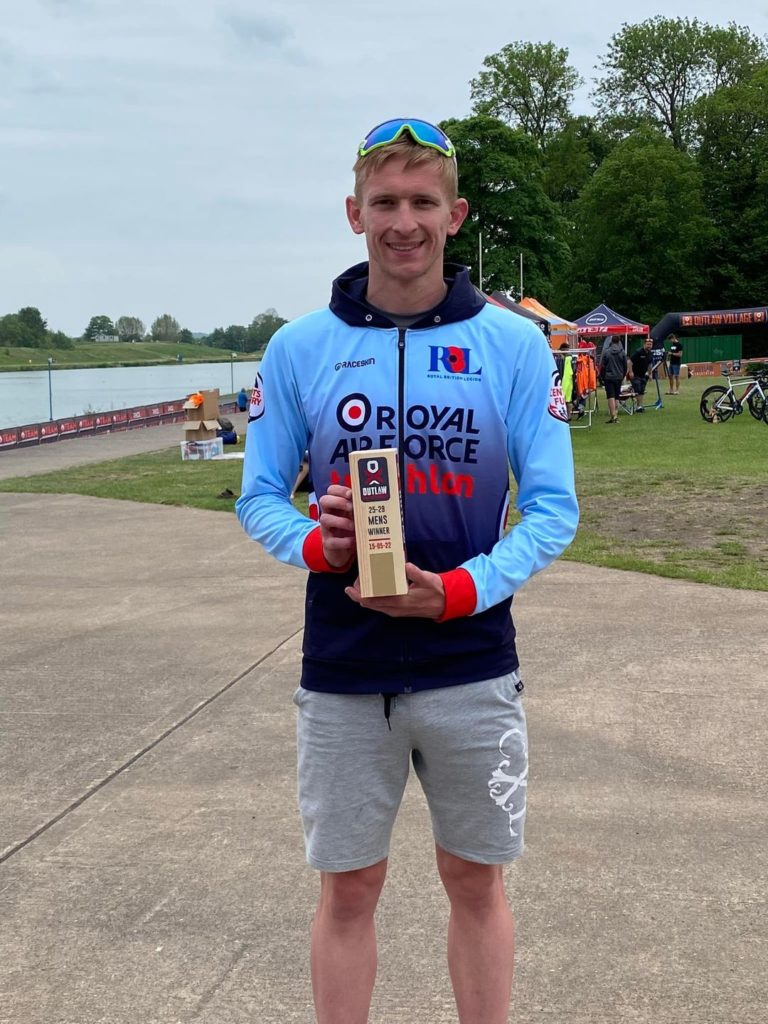 The latest Race in this years Burnley & Pendle Grand Prix Series was the Run Forrest (Wholan Nook) Trail Race on Wednesday May 11th with 201 finishers —  (RESULTS) — V50 Nick Gaskell continued his good form with a 6th place finish in 33.40, the race being won by Kendal’s Alasdair Russell in 31.21.

Top 10 place for John Horrocks at the Mearley Clough Fell Race  —  ( RESULTS)  —  as he came home in 8th place with a time of 35.21. Also sneaking in a race on the Fells was U23 Beatrice Toman who ran on the Fells as a youngster coming home in 92nd spot running 50.19  Michelle Teare ran her first fell race in entering this finishing in 95th spot (51.11) – 13th woman finisher out of 31 and 3rd V40 woman. Speaking to the Harriers after she had finished Michelle told us: “my first fell race which I was a bit nervous about as I knew how steep the climb was and I had just run a hilly 10k trail race 2 days before so wasn’t sure how tired my legs would be. However, I felt I paced it well and thoroughly enjoyed it. It’s given me a lot of confidence for future fell races”.