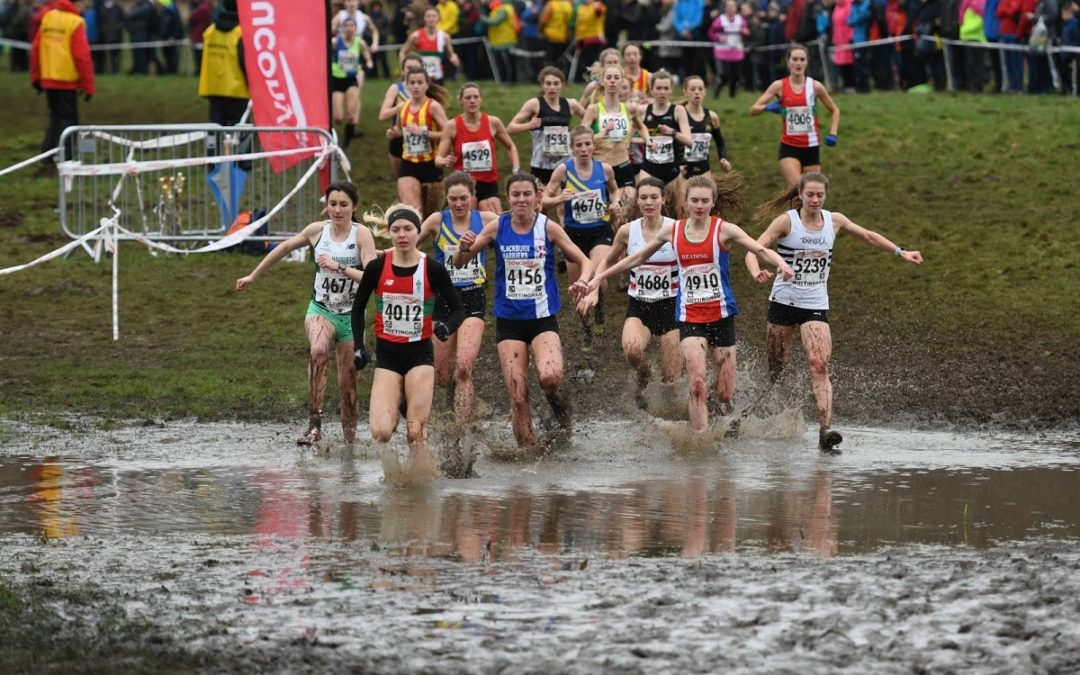 What a cracking cross country season for Jess Judd this year. On January 4th she kicked off the year in style by winning the Essex County Championships at Basildon and followed that at the end of January by winning the Northern Athletics Cross Country Championships at Bedale on January 25h. On to the BUCs Cross Country Championships in Edinburgh on the 1st of February where she took the Silver Medal behind Anna Moller; Then yesterday Jess won the Silver Medal at the National Cross Country Championships held in Wollaton Park behind winner Anna Moller with Leeds athlete Bronwen Owen in 3rd place to complete a very successful set of cross country championship racing. Jess moves on to the New York Half-Marathon shortly and we wish her all the best in that race but before that she spoke to the Harriers about her race and her season so far saying “I’m really happy to finish my cross country season with silver yesterday! One of my best runs I think and although it wasn’t good enough to win, this cross country season has without a doubt been the best I’ve ever had so am just grateful I managed to finish it off well! Watching Rob run well was the icing on the cake! Looking forward to New York now!“

Ellen Sagar-Heasketh had a very good run too, placing 253rd in a time of 43.05 out of the 911 strong Senior Women’s field. Ellen spoke to the Harriers after the race telling us  “I’m pleasantly surprised with my result. Highest I’ve ever come at the nationals. The toughest cross country I’ve ever done! A big well done to team mate Jess too, amazing running in shocking conditions”. 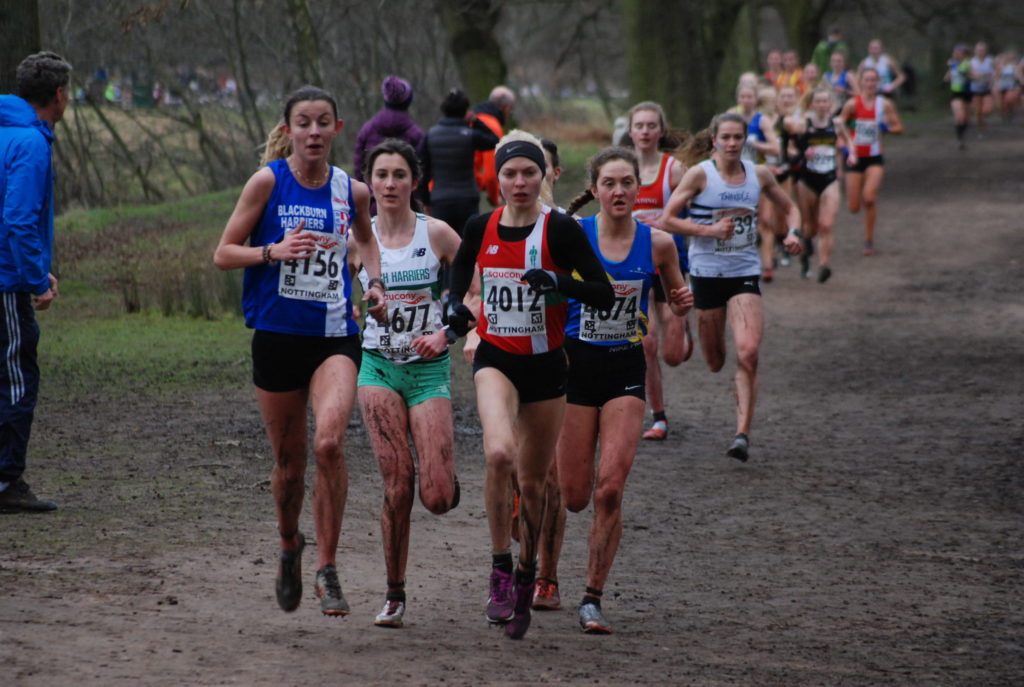 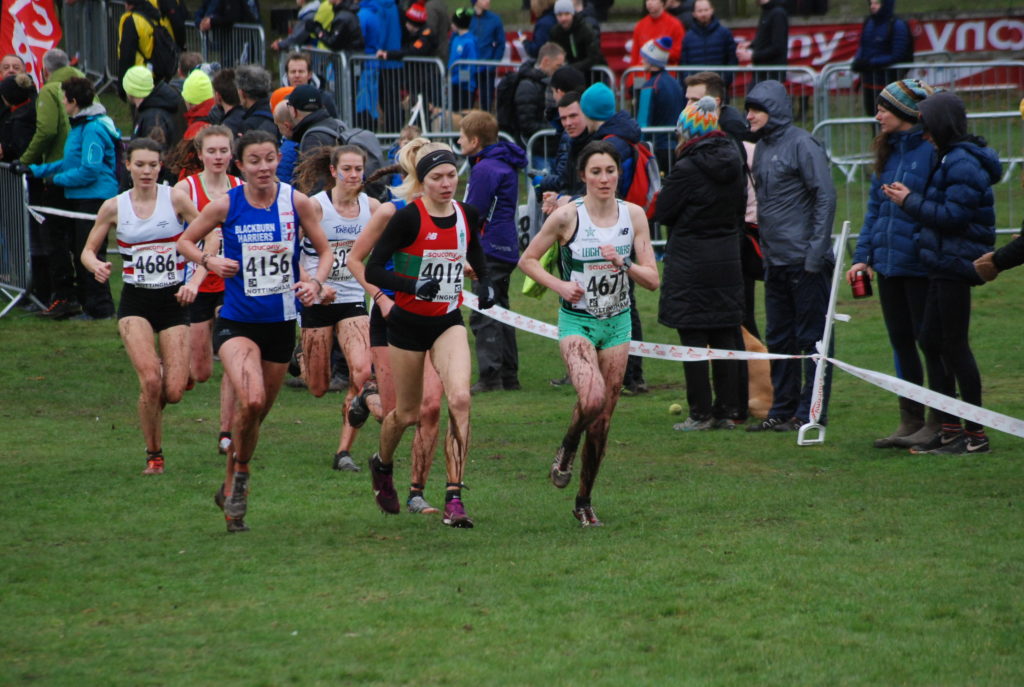 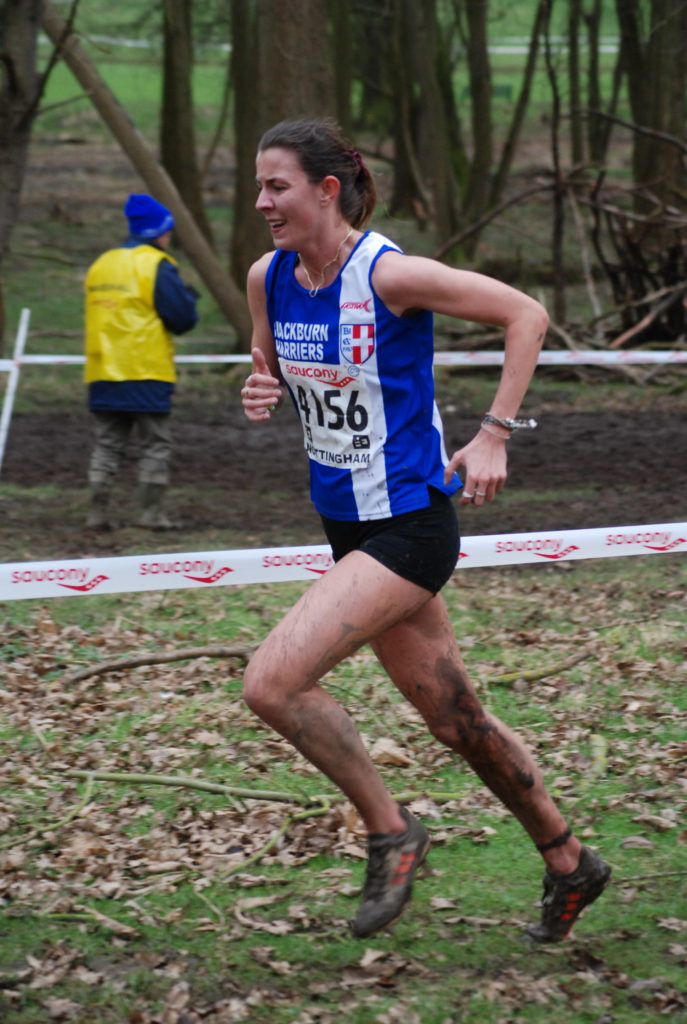 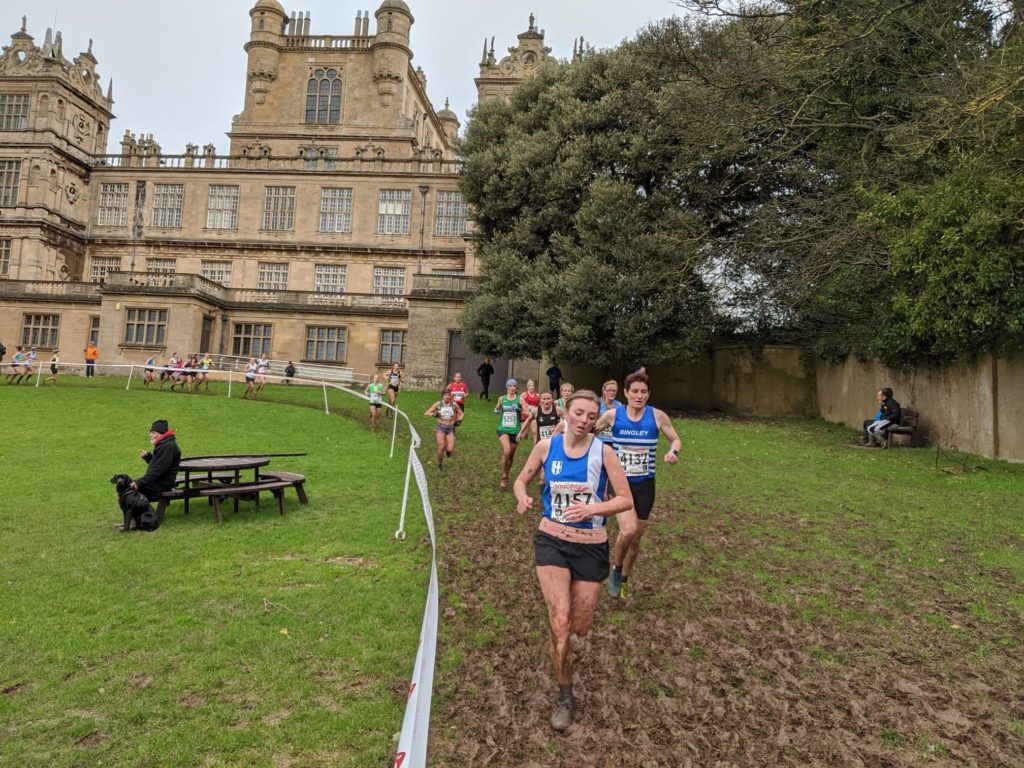 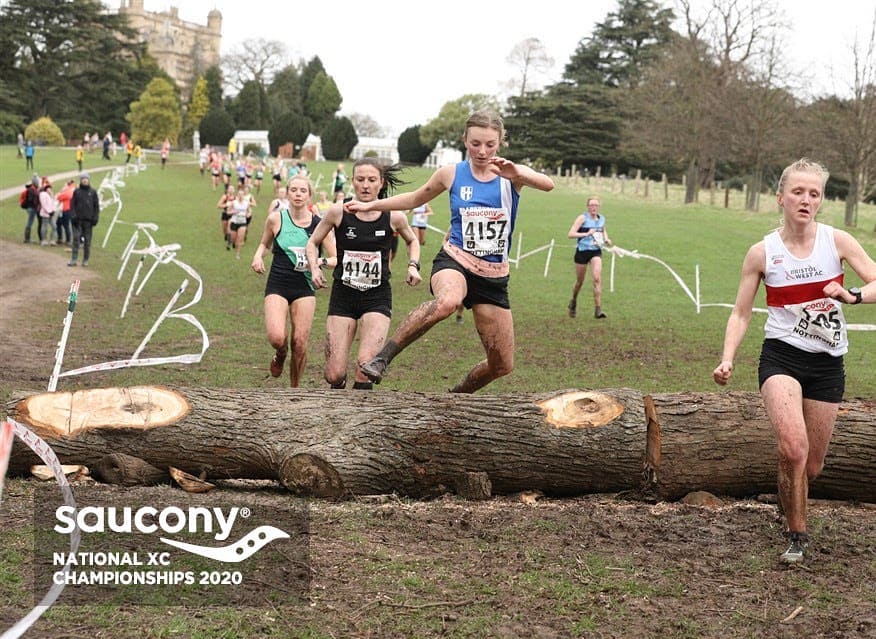 Rob Warner had another top quality run as he came home in 23rd place with a time of 45.56 out of a field of over 1700 runners. Rob, like Jess is off to race the New York Half-Marathon too and approaches the race in very good form. This was Rob’s highest placed finish in the Nationals and he told the Club that “it was a tough course out there yesterday, was really tough to get any sort of a rhythm so I just tried to get through the mud as best I could and then get into my running on the better parts of the course. Really pleased with my best finish again at Nationals and probably my best winter so far, so looking forward to the track soon!”

ROB’s VIDEO (through around 50 seconds) 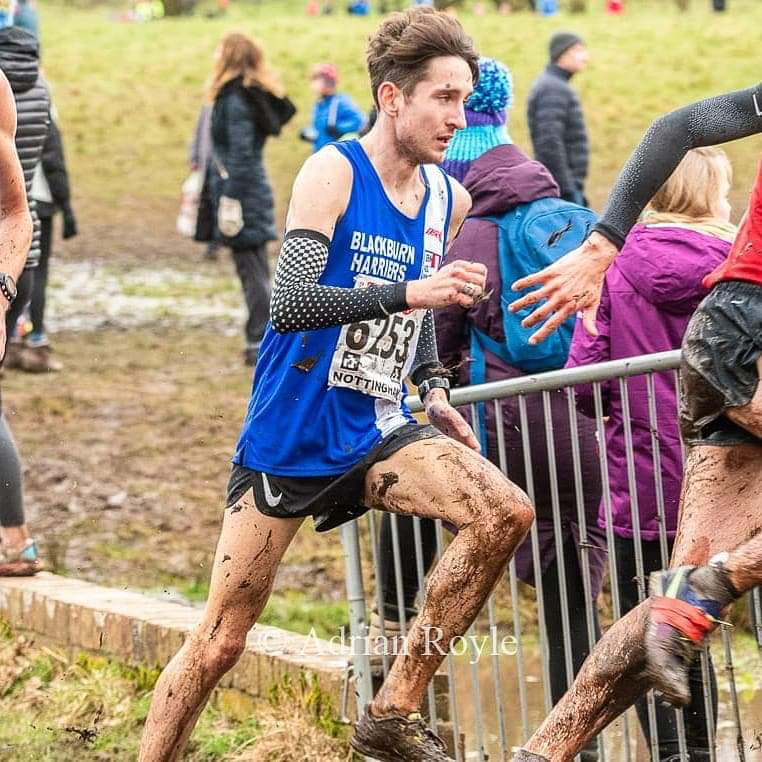 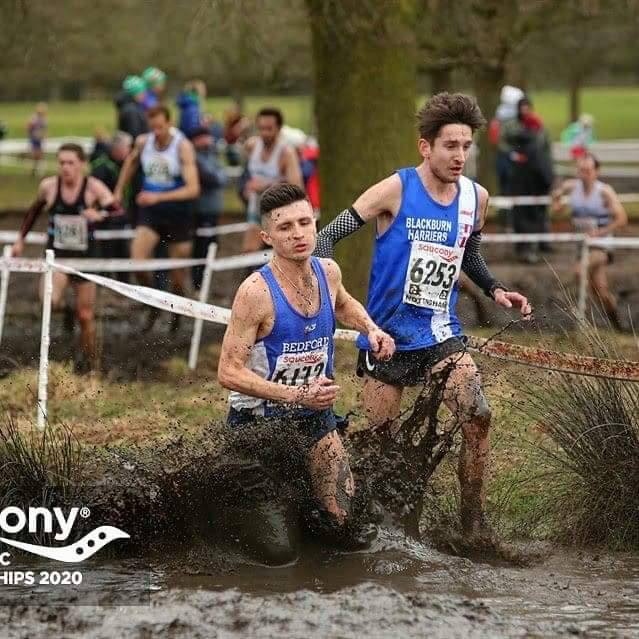 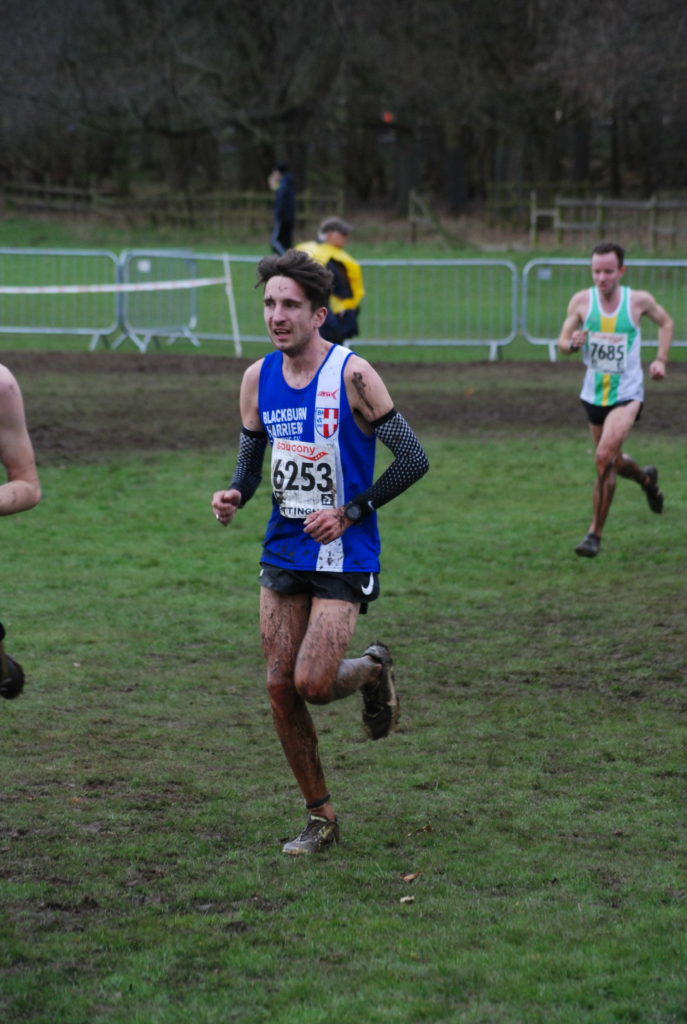 Joe Gebbie ran in the Junior Men’s Race and he was pleased with his run finishing inside the top 100, as he came home in 88th position clocking 41.47 and told the Club afterwards that he “Had a cracking day down to the nationals at Nottingham with a car full of of lads from uni, and even better to catch up with my brother and sister who were up running for Fulham. I remembered enjoying the course last time and thought it was great again today. The bog was something else and got the better of me on the final lap leading to the finish – legs cramped with every step through it. Managed to just about pull through and chuffed to make the top 100, much better performance than last year! Big well done to all the Harriers who waded through it”. 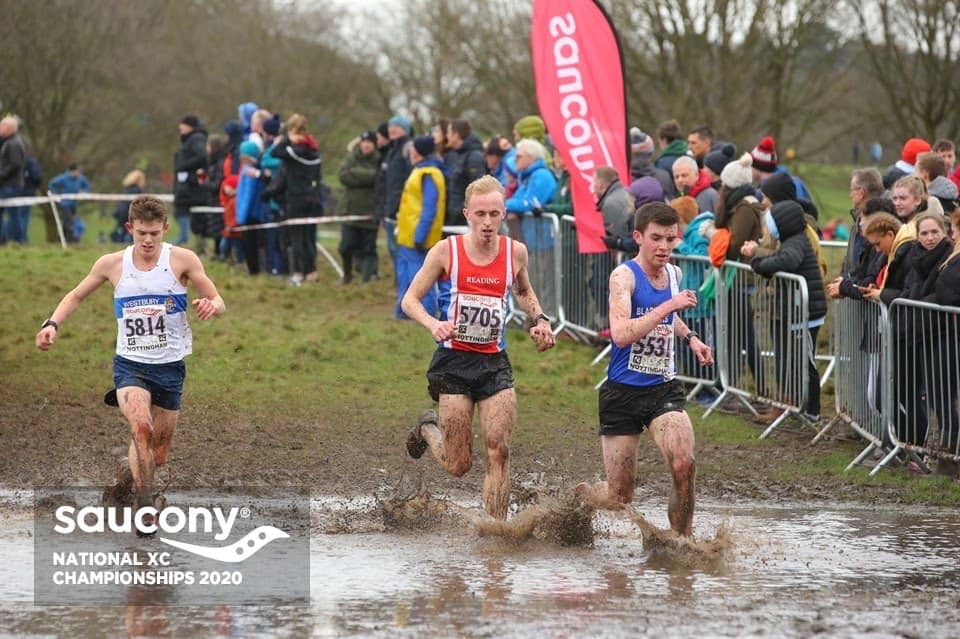 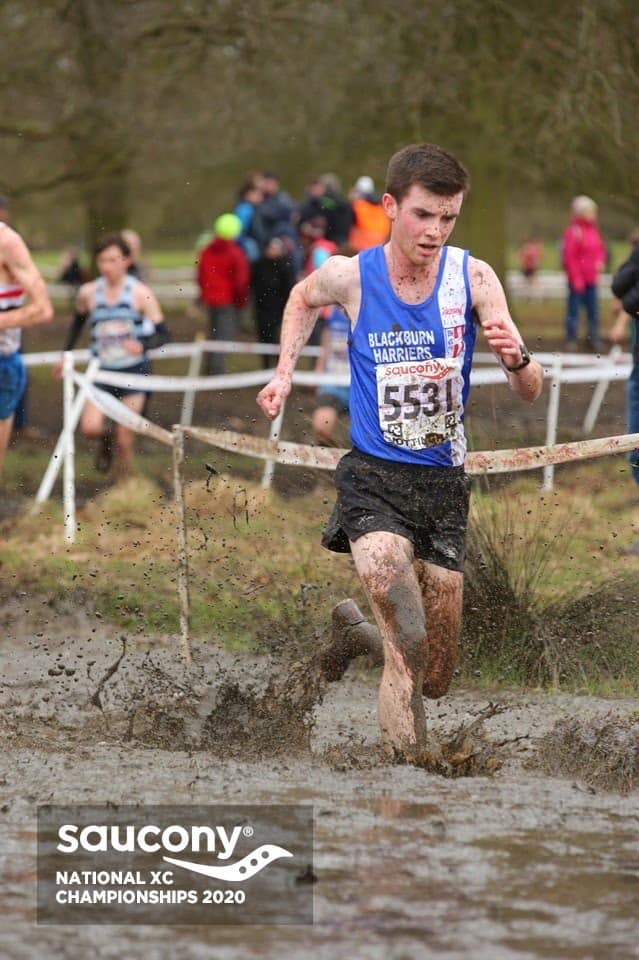 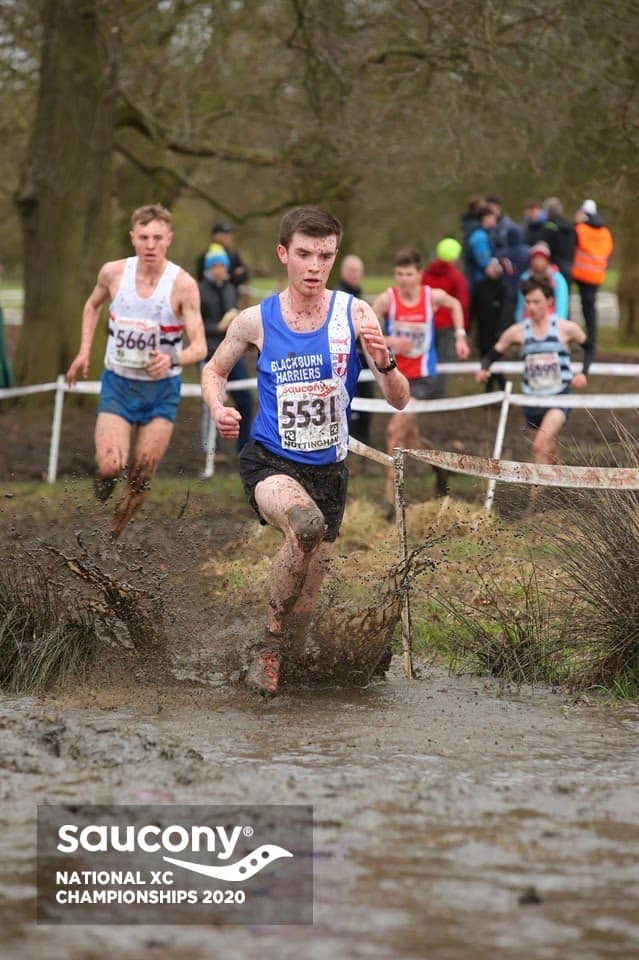 Jayden Riley started 2020 as bottom of age U17 and ran at the Scottish National Championships as his fiorst outing, where he won his Heat (23.60), going on to win his semi-final in 23.18 before just missing out on the Medals in 4th place in the Final (23.28). At the National Championships in Sheffield, Jayden was drawn in a strong Heat and had to run a new PB in oder to qualify for the semi-final, which he did with a 22.98 clocking and the first time under 23 seconds. He finished 3rd in the semi-final with a time of 23.23 and told the Club after “It was a great challenge to be racing against all the others at the Nationals but in the end I came out with a new PB and I also made it to the semi finals which I was really pleased with”.

U20 Fawwaz Mustapha is in his first season for Blackburn Harriers in which he has had just ten competitions. This coming season will be his second year as an U20 and he has kicked off really well in the Indoor Season starting off with a 7.51 at Sportscity in January and following that up with a new PB of 7.41 at the Championships yesterday in his Heat of the 60m.

U15 Thomas Monks started with the Harriers last year and has already made some big strides forwards in the Indoor season with personal bests of 8.01 in the 60m and 26.01 in the 200m approaching the National Championships this weekend in Sheffield. Thomas went in wanting to break the 8.0 second barrier and that is precislely what he did and in style as he clocked a new PB time of 7.87 in his Heat. A delighted young athlete told the Harriers “I’m really happy with my new PB at the nationals and happy to have been there in my first athletics season. I can’t wait for the outdoor season as I still have so much to improve on. I also wanted to thank the club, staff, teammates and coach for my huge improvement”.

Holly Bradshaw has had a very consistent Indoor season this year in the Pole Vault. On February 2nd she cleared 4.61m in equal 1st place in Paris and followed that up with a seasons best 4.63m in winning, again in Paris on February 8th. On 16th February, Holly competed for her University at BUCs in Sheffield and won the Gold Medal with another seasons best of 4.65m and then topped it off with her third seasons best in a row in Paris on Sunday (February 23rd) of 4.66m in 4th place – the Video shows Holly clearing 4.66m easily. 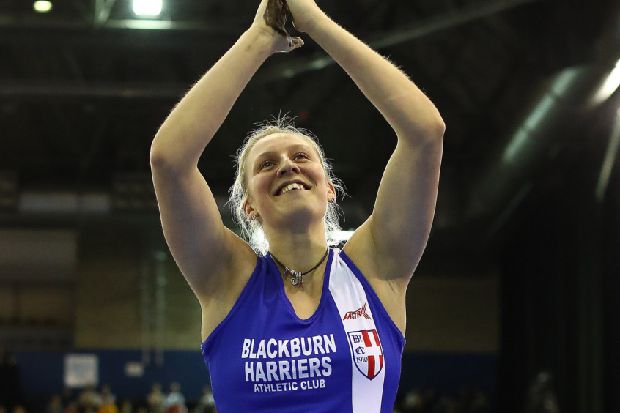 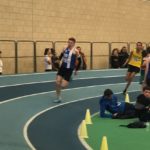 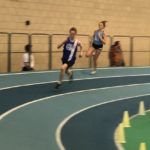 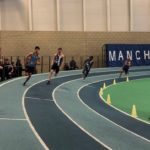 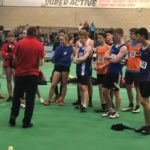 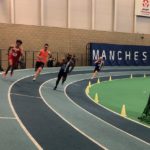 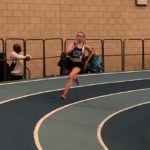 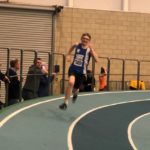 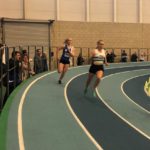 The 60m saw a number of our sprinters racing with Brandon Zimyemba posting a time of 7.23 (5th) in his Heat, his first time ever, competing indoors. Dominic Bretherton finished 2nd in his Heat with a time of 7.52 which was a seasons best, his personal best being 7.45.

Fawwaz Mustapha (U20) who had competed at ther National Indoor Championships in Sheffield the day before, doubled up for a 7.57 clocking in 2nd place in his Heat with fellow U20 and Long Jumper – Ben Branton – also setting a seasons best with a 2nd placed 7.95. Another debutant indoors was U20 Liberty Thompson who placed 3rd in her Heat in a time of 8.98. In the next Heat U17 Stuart Yates ran a time of 7.79 in 2nd whilst Sprint Hurdler Ben Boocock (U17) set himself a new PB in the same Heat with a time 7.97 (4th).

U17 Amy Wiggans made an impressive debut indoors as she won her Heat in a swift time of 8.37 whilst U13 Daniel Nuttall can’t help setting new PB’s as he clocked another one on the day, winning his Heat in 8.33 – Daniel started in January with an 8.70 clocking and has knocked nearly four tenths off that time in the following six weeks. In a second round of 60m races – Brandon Zinyemba, Fawwaz Mustapha and Dominic Bretherton which saw them all run in the same Heat – Brandon placed 3rd in 7.25, Fawwaz 5th in 7.49 and Dominic 6th (7.55) which was very consistent sprinting on the day.

Well over 500 runners turned up for this one, run in the most unfavourable conditions as can be seen by the fact that only 14 runners clocked times under the hour for the distance. Blackburn Harrier Calum Holmes who has a 10 mile personal best of 57.40, suffered the same as everyone else, but still managed a top 20 place – clocking 61.28.09 (19th). Calum spoke to the Club after the race commenting “it’s the toughest road race I’ve done everyone went from 5min milling to 7 mins per mile it was dangerous and the route got changed because of the weather made no difference horrible I’m glad I managed to finish it without getting frustrated I’m happy with it being making it a training run – Struggled with balancing myself in the last 5 mile”. 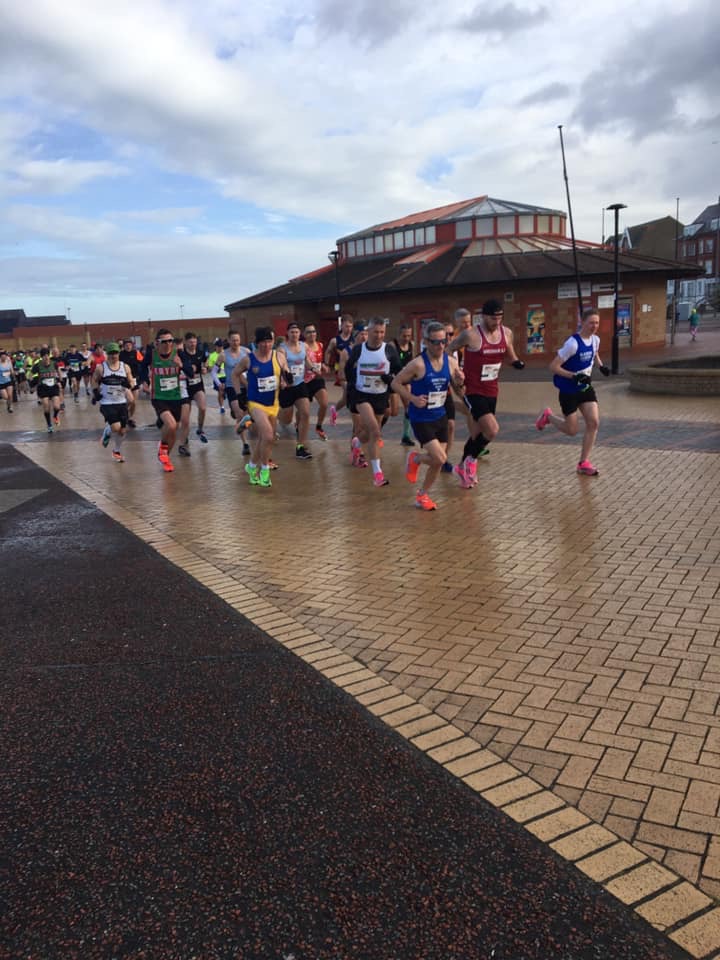 Calvin Ferguson is taking every opportunity to get back from injury and race fit and here he is again, happy with his run after finishing 36th (52.46) in The Dark Un – won by Todmorden’s Andrew Worster (32.31) –  run last Friday night – February 21st. Calvin told the Club that he “Felt the strongest I’ve felt for a long time, just need the speed and endurance back now, as my hill strength seems to be returning a lot quicker than I predicted. Happy with my run as I ran with a very dim head-torch. Looking forward to increasing the mileage and consistency in a couple of weeks time once I’m back from holiday“. 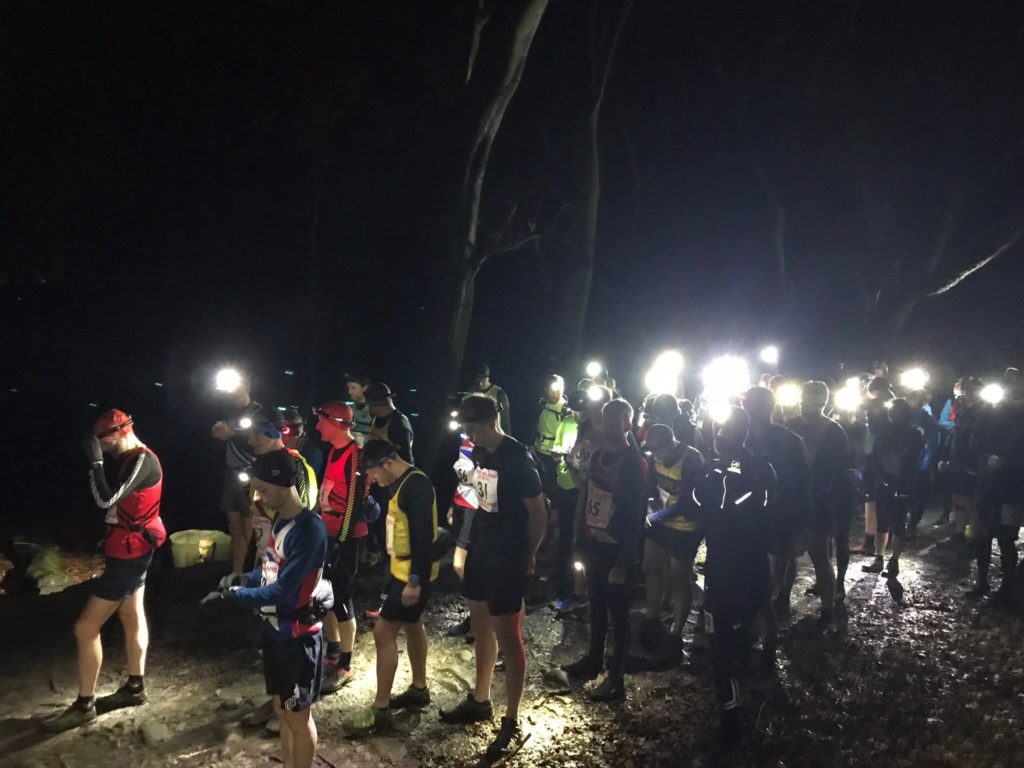