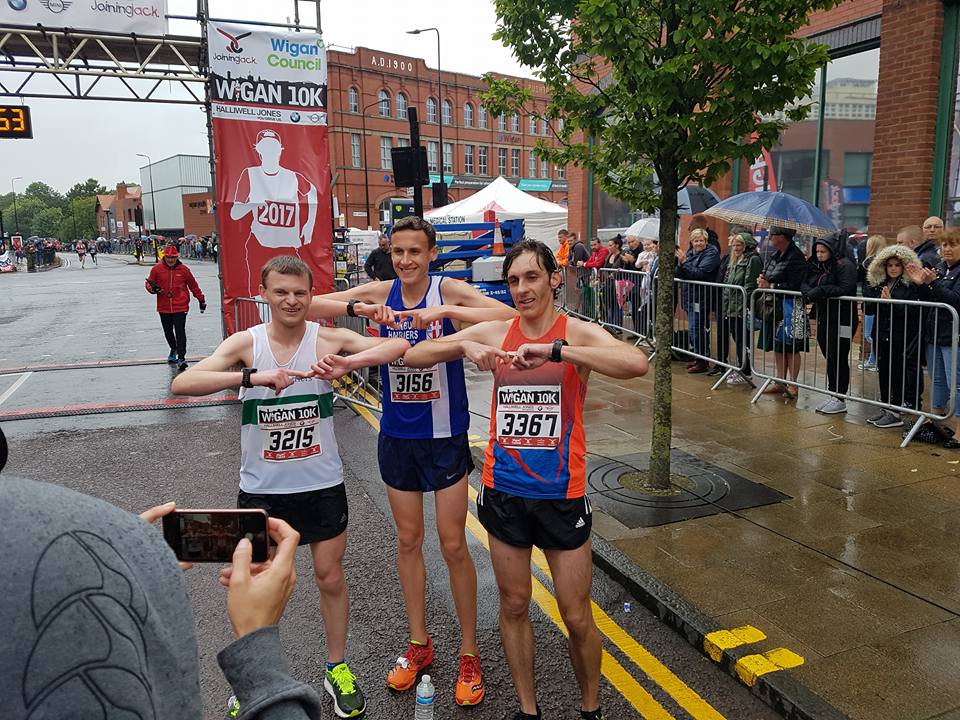 On a wet and sometimes windy day the Wigan 10k attracted over three and half thousand runners in what was described as a very well organised Race.

For the Harriers Joe Monk had a great run to win the Race in a time of 32.50 and was really pleased with the outcome telling the Club that he was “Over the moon with today, over 3500 runners competing, what a great atmosphere. The first time I’ve run tactically today, sat in for 4km feeling very comfortable then put in a surge and managed to come through, and a bonus to run 32:50. Training is coming together really well now and I’m glad the race today helped to show that”.

Video of the Finish

Carmen Byrne was just one second off making it a double win for the Harriers when she came home in 2nd place in the Women’s Race with a time of 39.19 (53rd) being pipped on the line. Carmen who is looking forward to this years cross country season gave her thoughts on her race afterwards telling us “still on my quest to get better on the roads ready for cross country, Wigan 10k seemed a great chance to get a good run. I was pretty consistent on pacing, running as first woman right until the line when another woman speed past and pipped me by about 1 second. Overall though it was fun… Just cant wait to get back on the lovely mud now!” 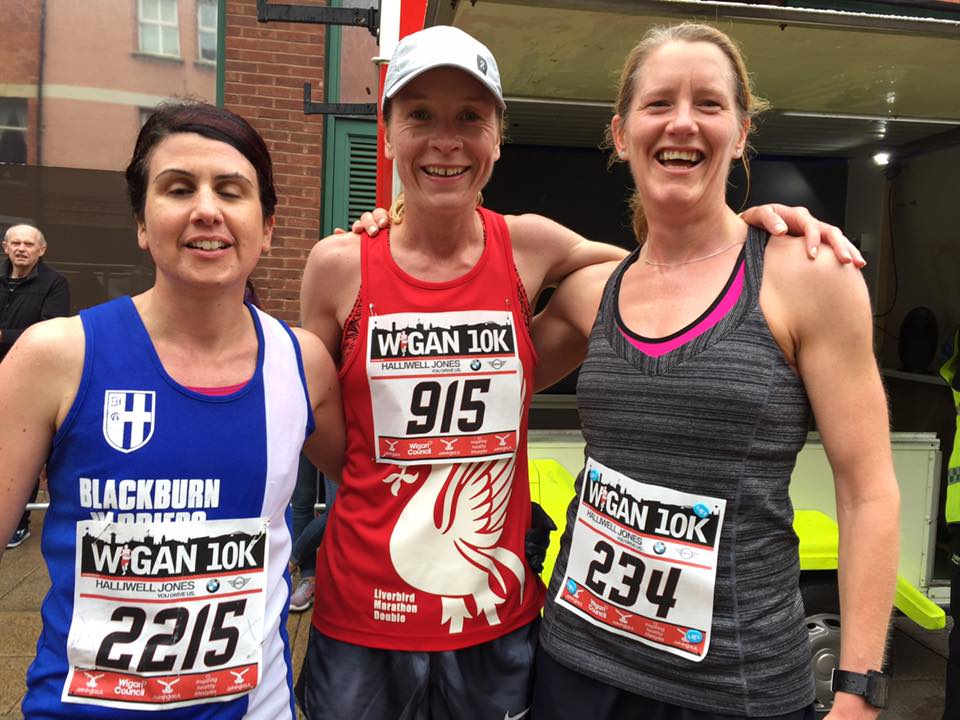 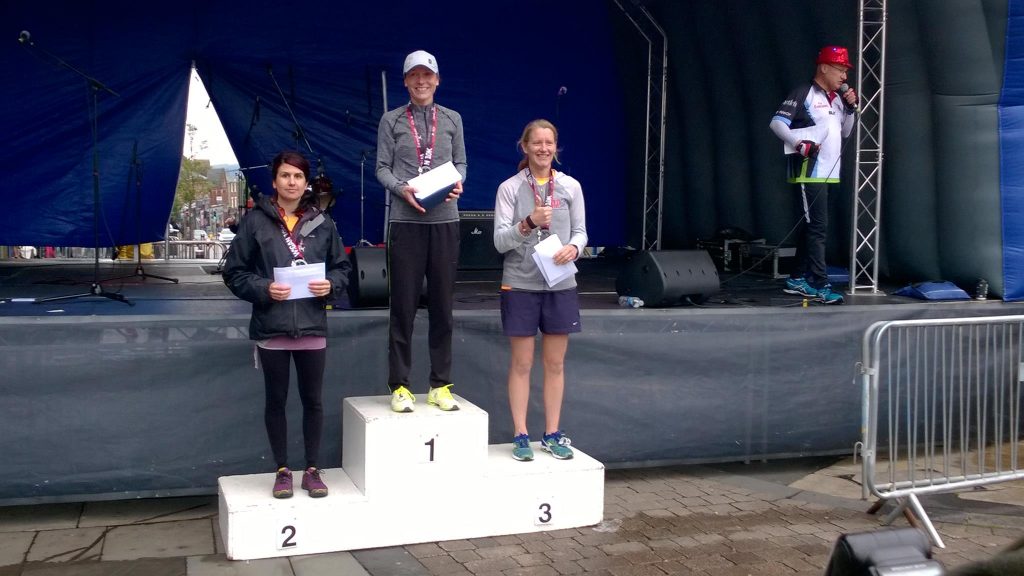 Next in for the Harriers came Ben Costello in 12th place overall, clocking a seasons best time of 35.26 and commenting “Going into the race i knew i was in the best condition i’ve ever been in but with the weather it wasn’t meant to be. My first mile was too quick and i knew from then i would pay for it in the race and around 4k i did this is when i just wanted to finish the race. Overall it wasn’t my best performance but was pleased to get my second quickest time. Well done to Joe on his win and to the other Harriers who ran. My thoughts are with Chris Davies who sadly didn’t look to well after the race had finished”. Chris actually finished up in hospital for rest of the day after being overcome by chest pains during the Race. Remarkably he finished the Race just one place behind Ben in a time of  35.42. V50 Ian Clarkson set a new PB for 10k coming home in a time of 44.42 and was delighted as you would expect and told the Club “I took on the ‘Wigan 10k’ today and came away very happy and pleased. Got myself another PB of 44:42 chip time, 45:02 finish time. Weather conditions, wet and a tad nippy first thing suited me, so I got me head down, found a small group to keep with and cracked on. 3000 entrants and a big party atmosphere and i came 275th. Well happy. Thoughts with Chris Davies, wishing him a speedy recovery”. Also setting a new PB was Lindsay Davies (V45) finishing in 534th position with a time of 48.28 telling the Harriers “Very happy with my new PB, wanted a sub 50 and got a sub 49 with 48:28, felt really good, legs not tired and breathing was well under control, not the best of conditions but the first three miles were very fast with a slight downhill but the wind and rain was in your face the last three mile. Would recommend this race it is the best 10k I have done”. 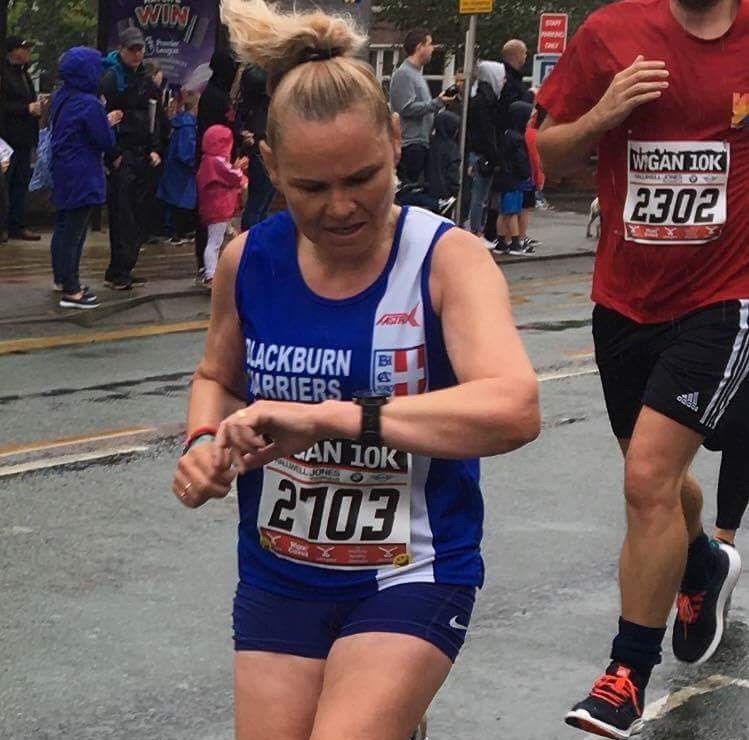 Rachel Wood is in training for the Berlin Marathon later this month and as part of her preparation in the lead up she ran the Cheshire 20 – featuring one hundred and eighty seven runners – finishing 19th overall and the winner of the Women’s Race in a time of 2hr 15.16. After collecting her Winner’s Prize Rachel spoke to the Club saying that  “The course was undulating and the weather was damp and windy. I treated it as a hard training run after a few weeks of heavy mileage. I didn’t taper for the race and so my legs didn’t feel fresh but it felt great to win the race in a time of 2:15:16. Not a PB but I am happy with my performance. Bring on Berlin marathon in a couple of weeks time!!” 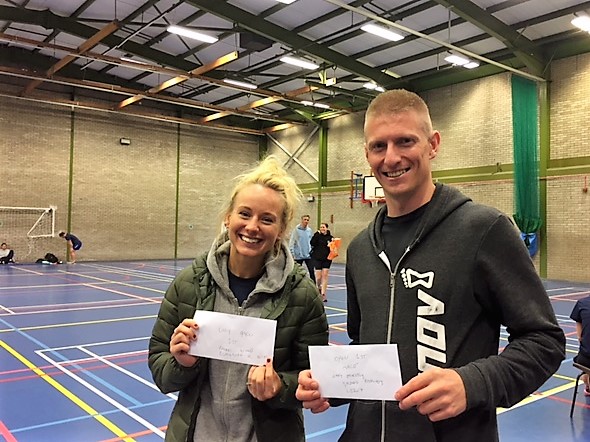 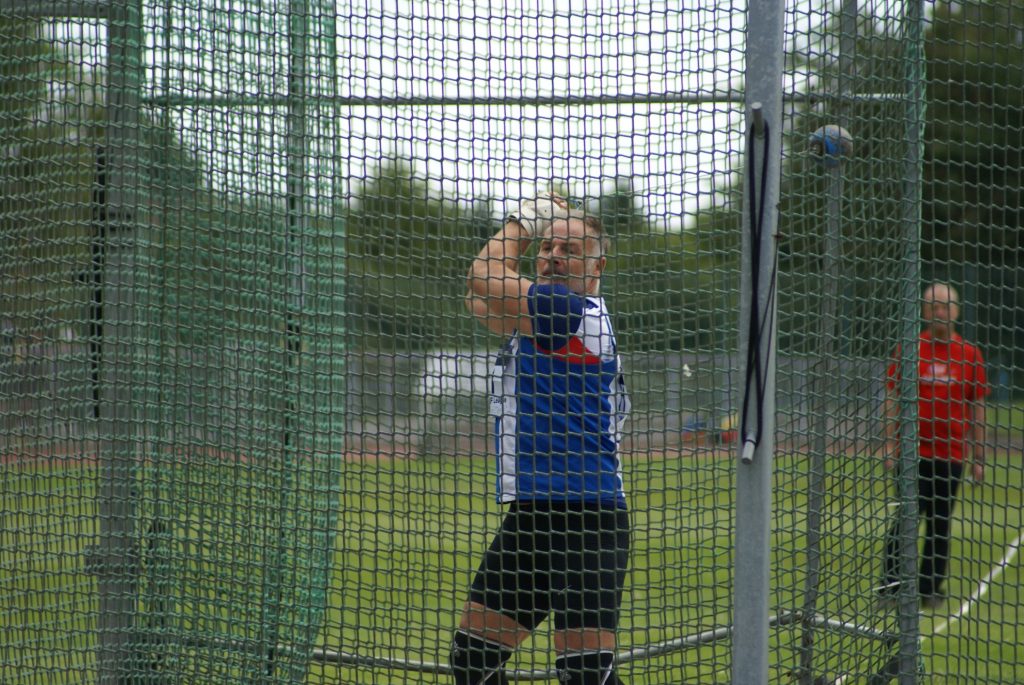 What a great end to the season for V50 Tony Balko – a season dogged by injury. Last weekend he entered the BMAF National Throws Pentathlon Championships and came away with the Gold Medal. During the Championships Tony set a new PB in the WT (11.34kg) with 11.23m, was just cms outside his personal best in the Shot Putt (6kg) with 10.21m, threw 27.83 in the Discus (1.5kg), 35.49m in the Hammer (6kg) and 29.25m in the Javelin (700g). Tony spoke to the Club and summed up his Championships and season “I’m pleased to have won Gold in the recent British Masters Throws Pentathlon Championships (M50) to draw the 2017 season to a close. It wasn’t a great performance, but just enough to secure a win. It’s been the toughest year yet with regards to injuries. At the start of the year I had a shoulder rotator cuff injury, mid-year a torn adductor and latterly a mild knee ligament tear. In truth it’s been a little bit disheartening to be going into Championships knowing you’re no where near your best, to be able to give 100% and deliver your best. However, all things considered, to finish the year as a British Champion, 13th in Europe in my age group and attain a couple of personal best performances is pleasing. So the plan is now to have a short break, a rest, then get into the gym to start winter training and look towards the 2018 season to try and come out fitter, faster, stronger and hopefully injury free, to go into key Championships in full competitive shape. Huge thanks to my family, friends and coaches for your kind words of support through what has been a very frustrating season”. 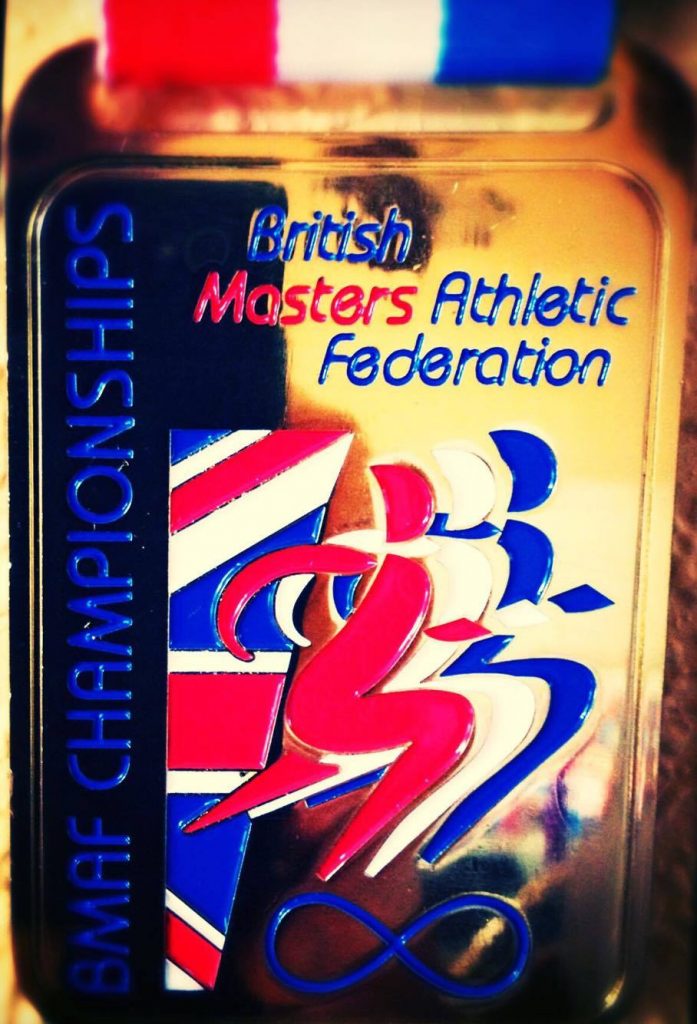 Four hundred and eighty nine runners finished this years Ben Nevis Race – one of the most iconic on the Race Calendar being a straight up and down run covering 4409ft. This years Race was won by Finlay Wild in a time of 1hr 31.37.

Among the runners was V50 John Orrell who was looking to break the three hour mark and had done a number of Fell Races in preparation. Finishing 422nd in a time of 2hr 59.39, John had achieved his target and was delighted with it as he told the Club.“Great race, great weather. Spent all year living and breathing this race. Determined to beat last year’s time and to break 3 hours. Did it! Yippee!!! 2.59.39 and knocking 23 minutes off last year! Nice surprise to see Helen and her friend giving me a big cheer on the mountain. Jelly babies too. Thanks girls!” 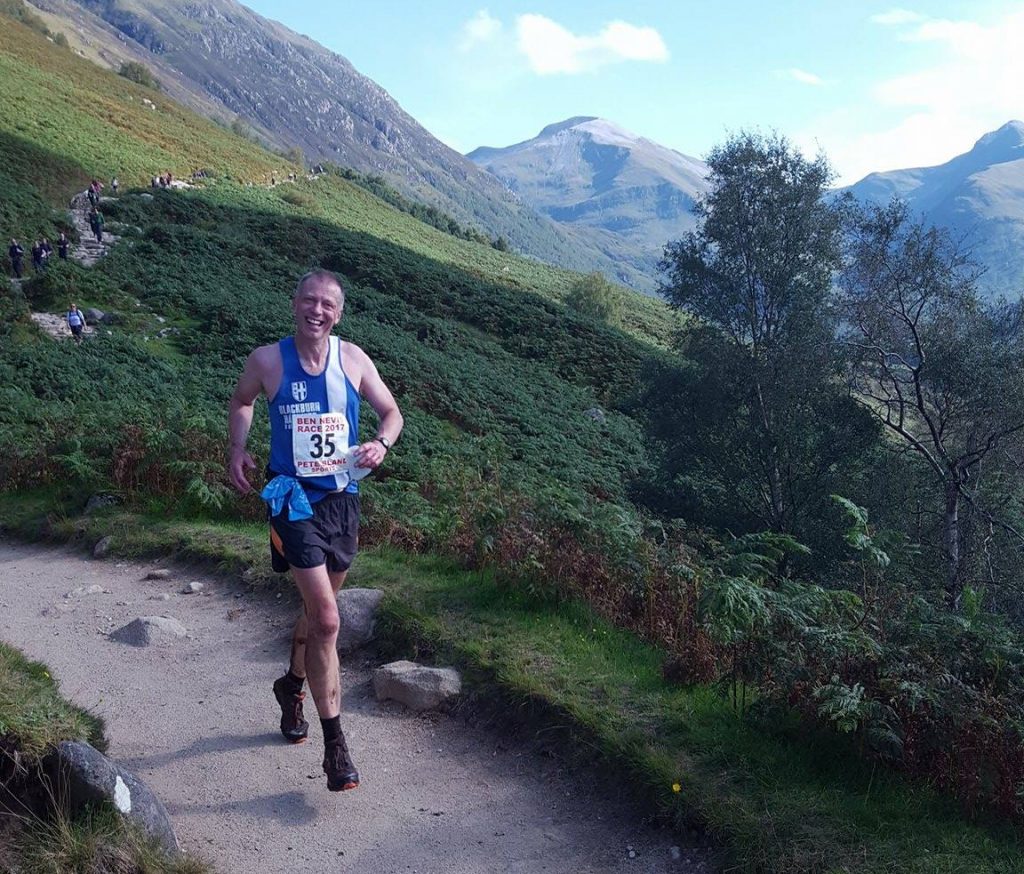 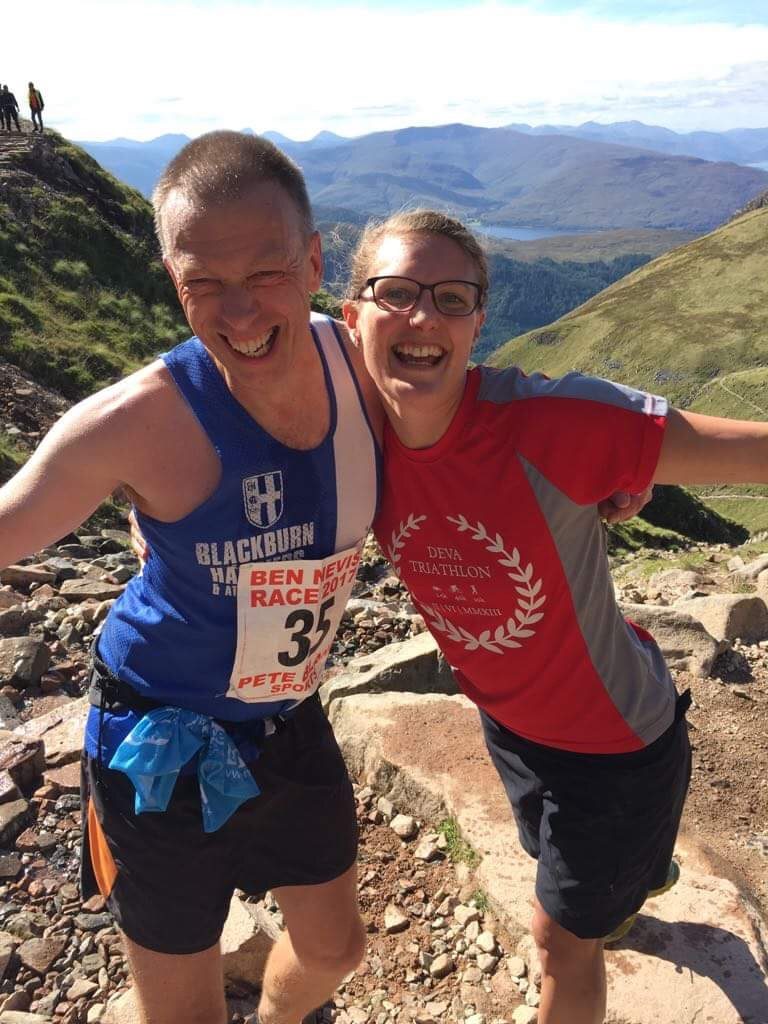 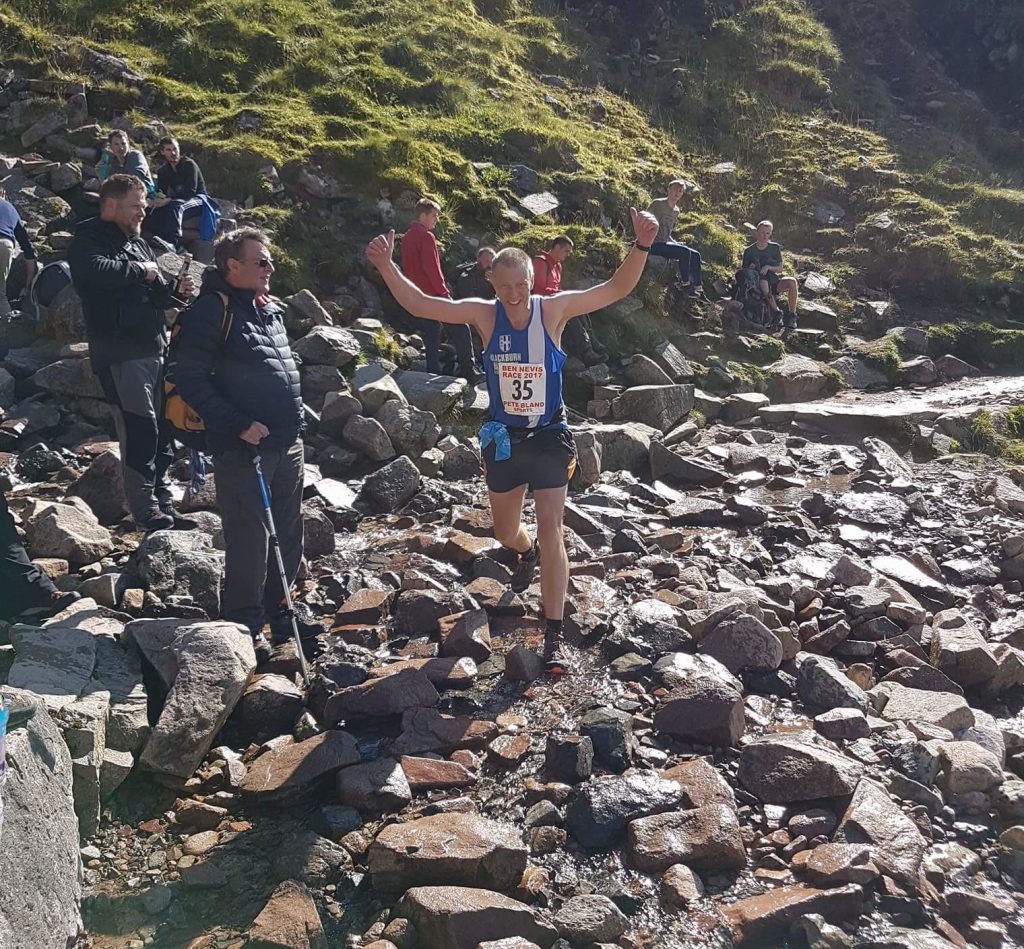 As the Track & Field season draws to a close a number of athletes choose to compete at the Open Meetings that different Clubs put on. The Litherland Open Meeting hosted by Southport & Waterloo gave an opportunity for a number of Blackburn Harriers to compete.

Anna Peers who has had a pretty good year competing 23 times recording 14 wins, five 2nd and two 3rd places took on three of the Throws in the Senior Women’s events winning all three with distances of 36.48m in the Javelin, 32.20m in the Discus and 10.19m in the Shot. U15 Cameron Harris who threw a National Standard 45.54m in the English Schools Javelin Final in July won the Javelin event of the day with a throw of 39.47m – competing for the first time since those Finals. U13 Nicky Saunders came 3rd in the Shot Putt with a throw of 7.34m and then took the runner up spot in the Javelin with 26.87m. U15 Matthew Heywood set two new personal bests – firstly in the Shot Putt with 7.32m (5th) and 23.02m in the Discus (4th). 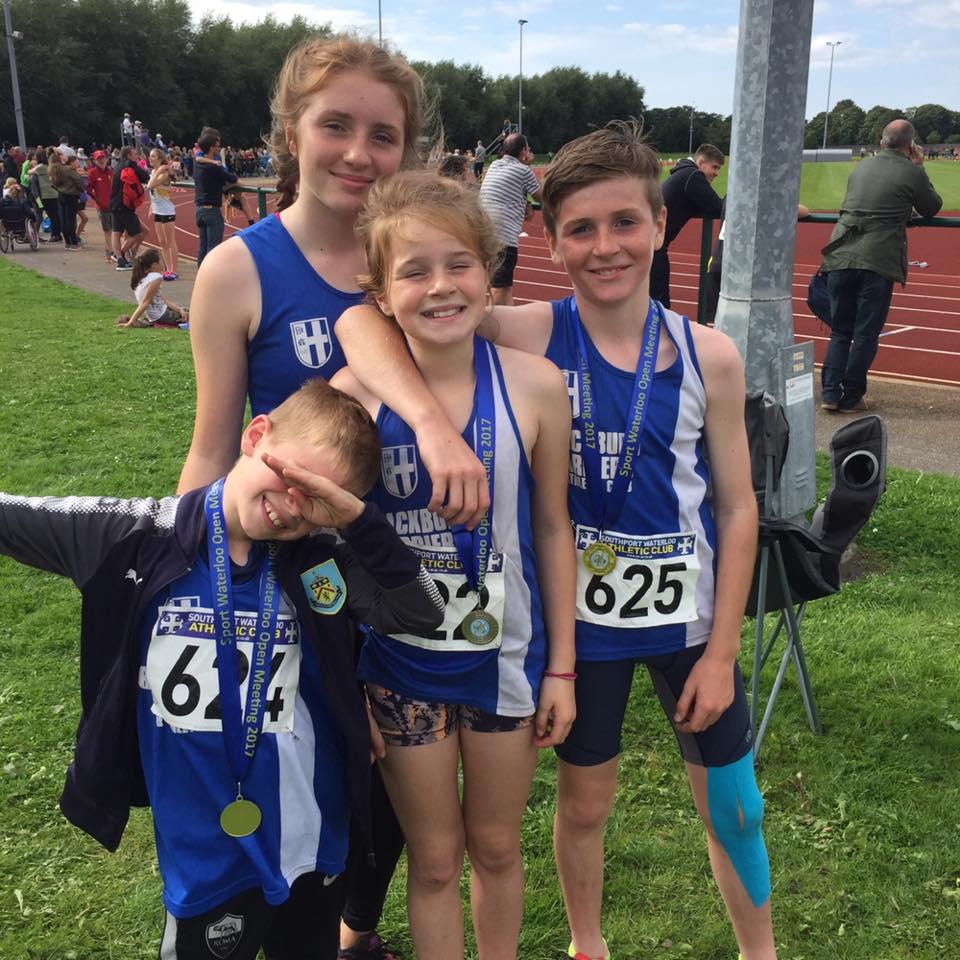 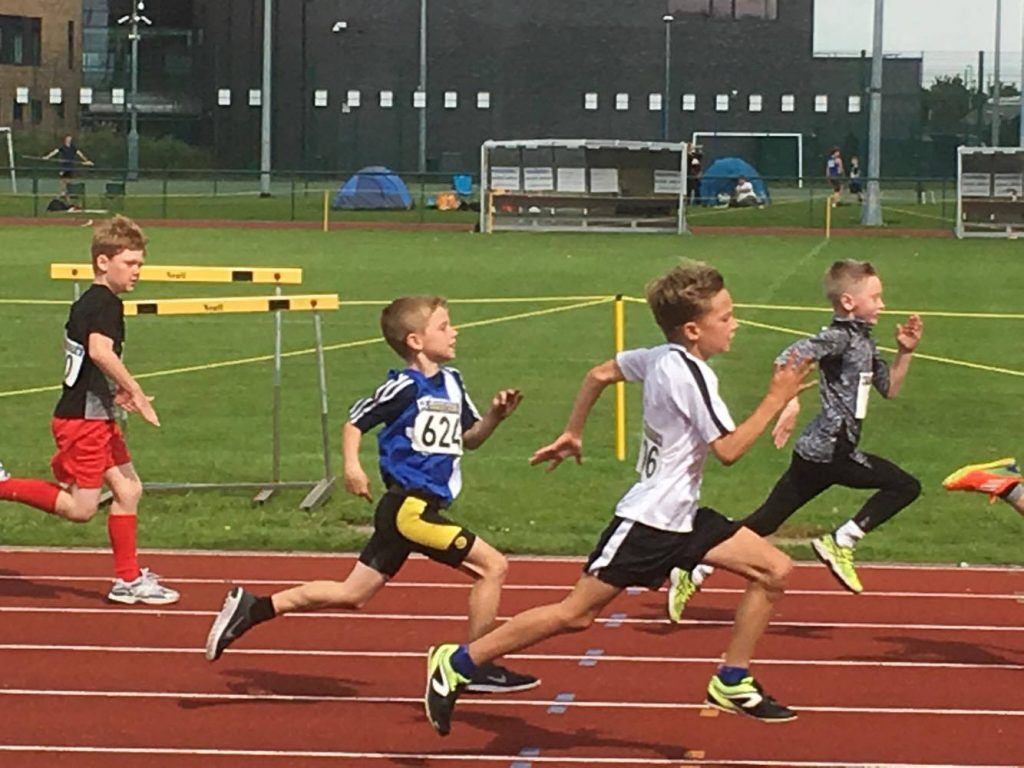 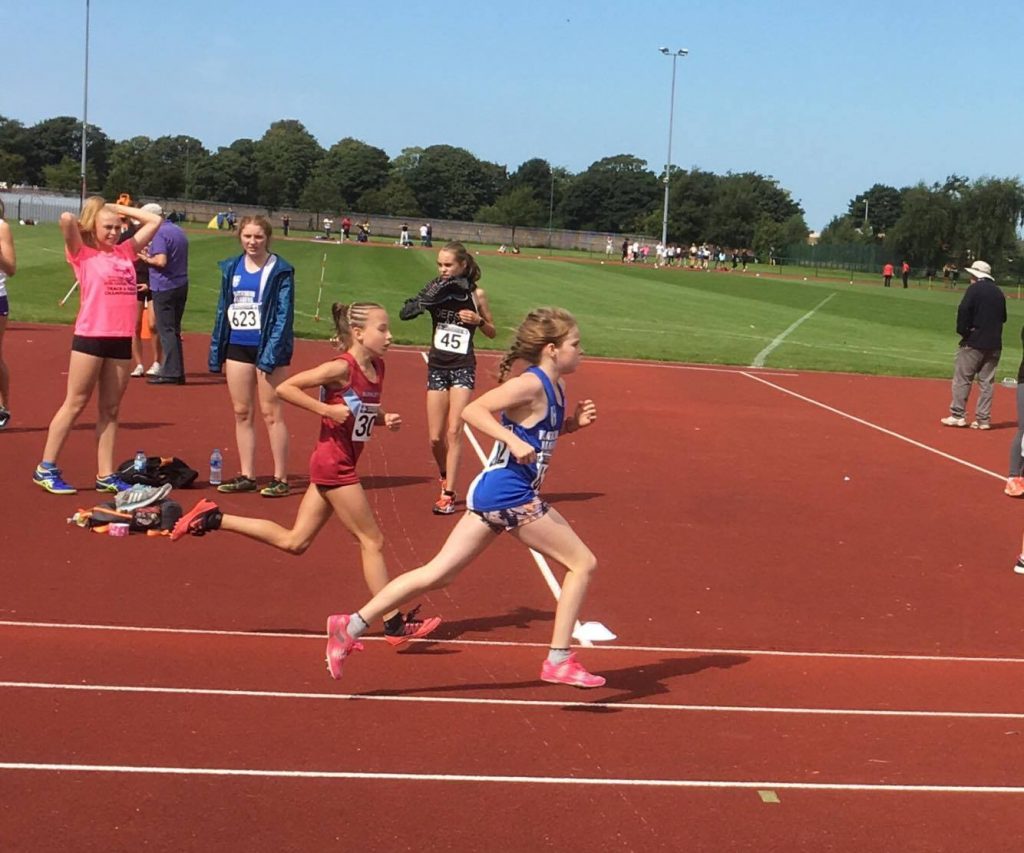 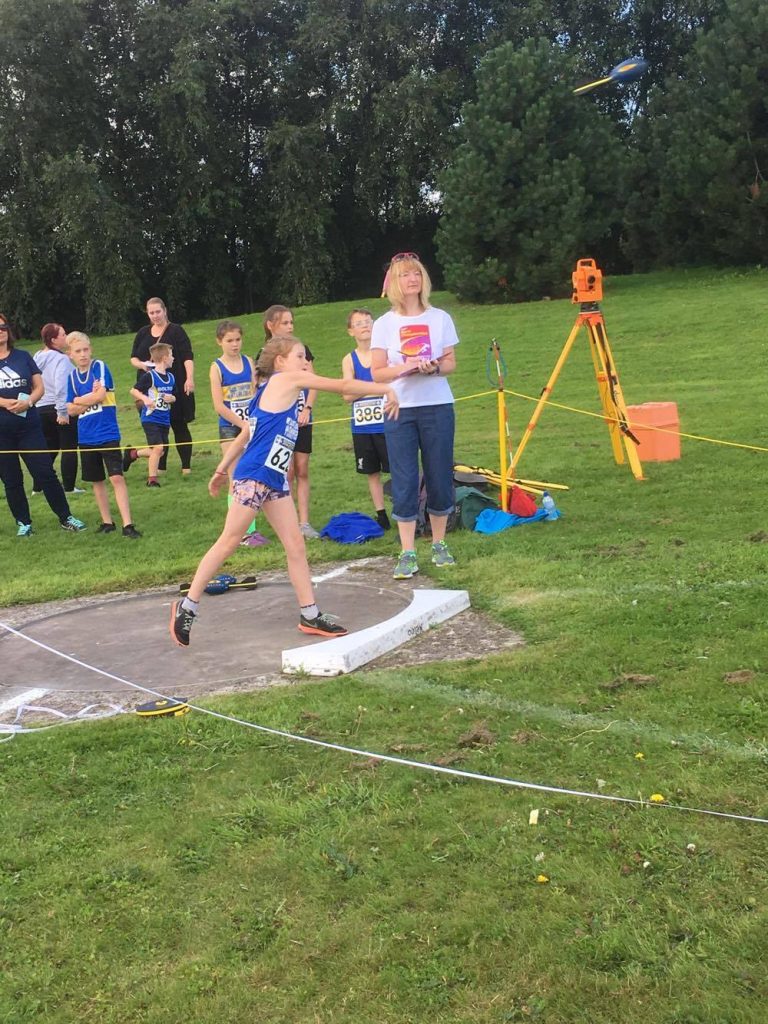 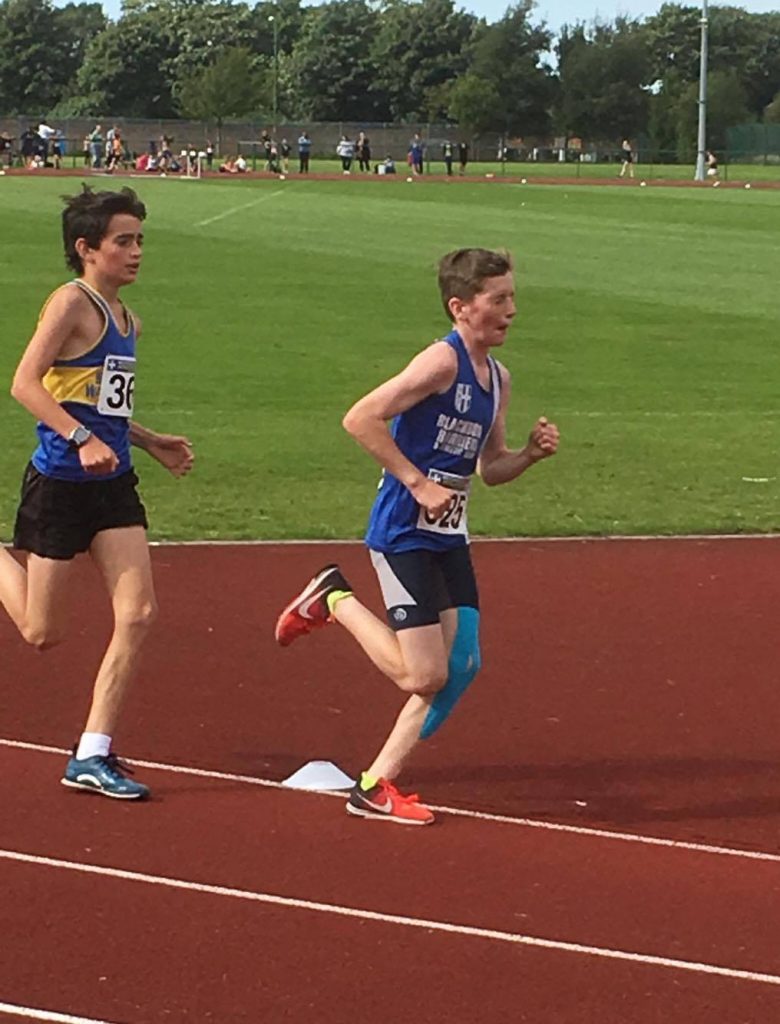 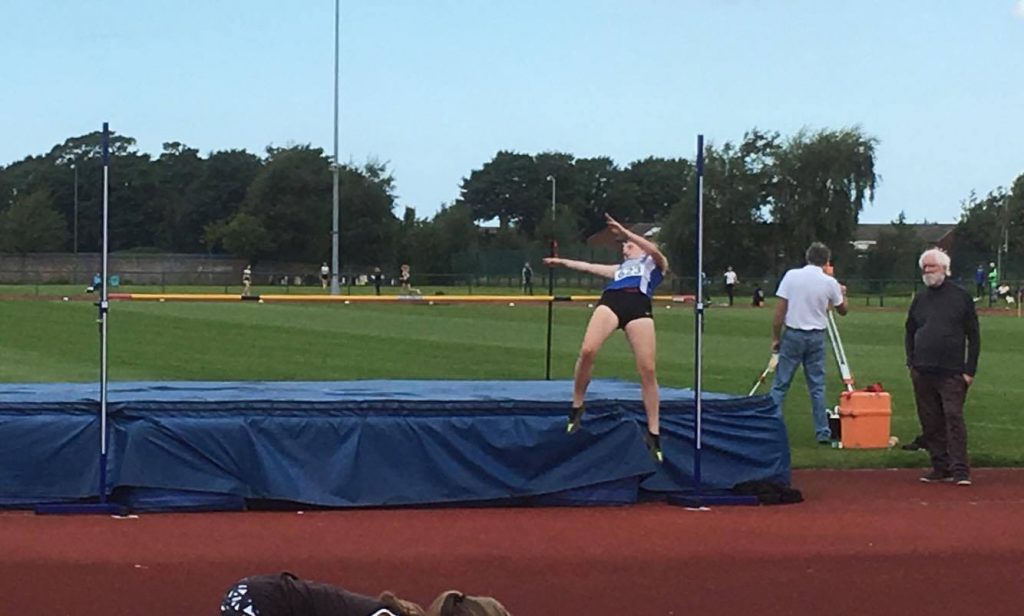 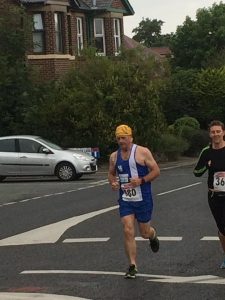 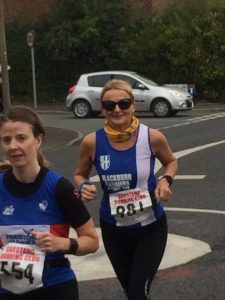 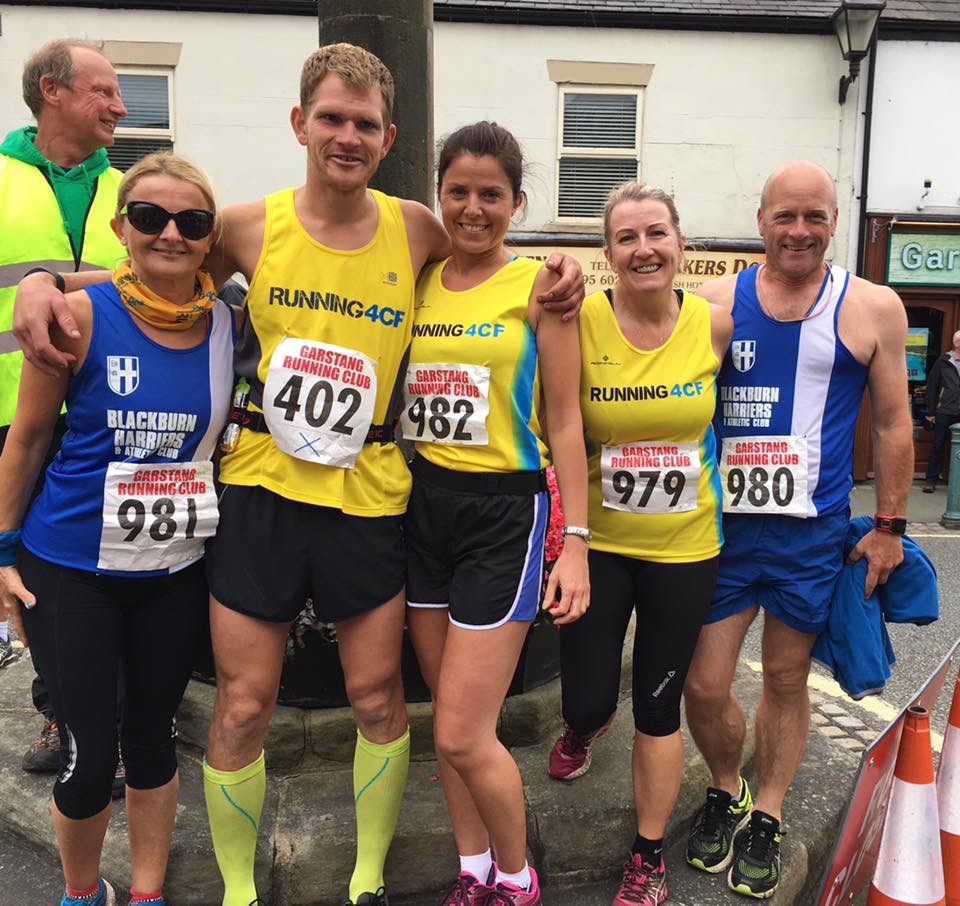 (Raising money for a great cause)