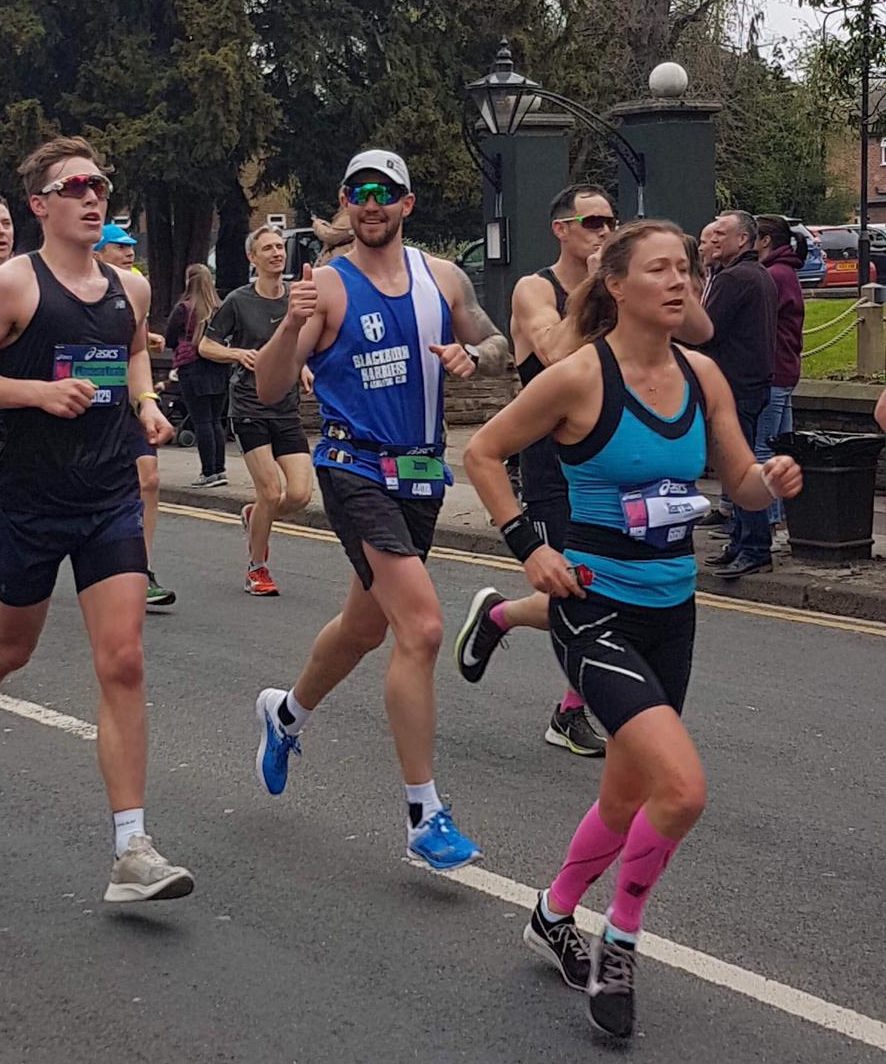 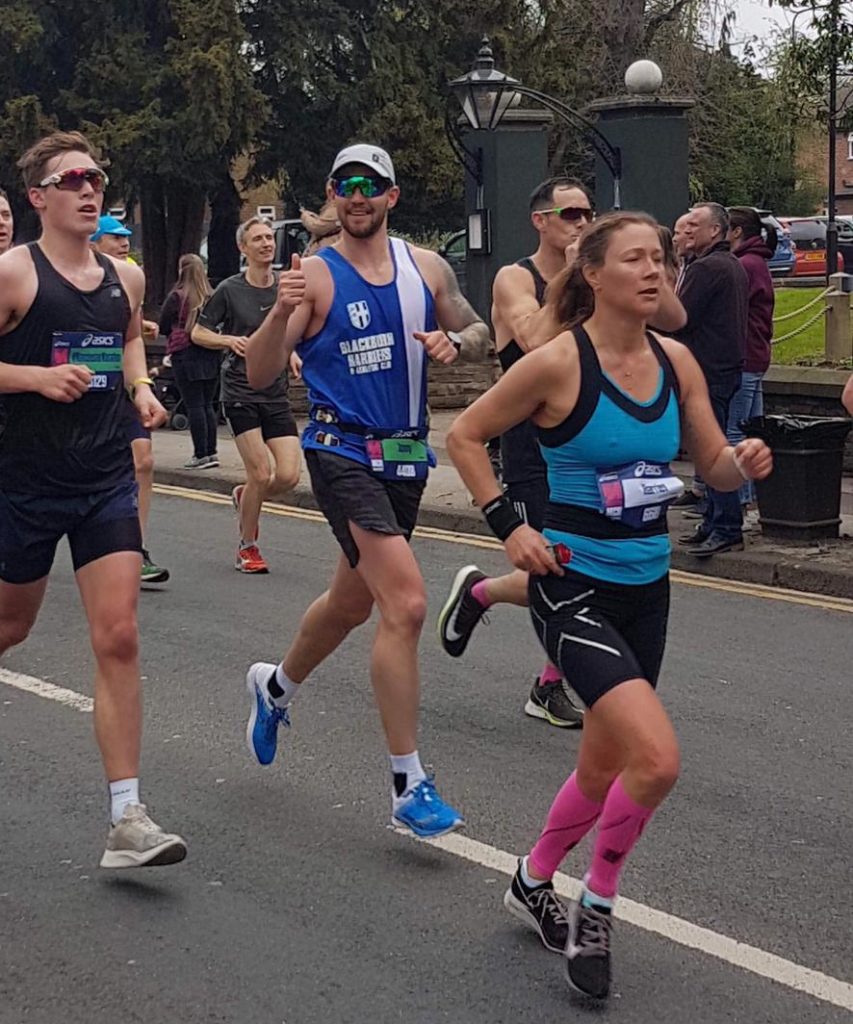 A clearly delighted athlete, Jonny spoke to the Club afterwards and said “Where can I start… Manchester marathon was my first marathon, and having only 3 months to prepare for a marathon a lot of people may have thought I was a a bit mad, but having recently left the marines feeling like I hadn’t succeeded I needed a challenge of this magnitude to fuel the fire again!

The race started and for the first half I felt strong and like I could have pushed a faster pace but I stuck to the game plan and advice of fellow Harrier, Paul Brindle who had some good tips and advice! Thanks Paul 👍🏻.I tried to just run consistent comfortable pace throughout and maybe even push the second half of the race a bit faster depending on how I was feeling. I couldn’t have asked for a better day everything from the weather to the crowds in Manchester where perfect everything just clicked and came together on the day all the training recently with Blackburn Harriers payed off and I enjoyed every minute of 02:56:50 running around Manchester, and look forward to getting back to training and look at what’s next”.

U15 Ben Boocock – the U15 Silver Medallist over 60m Hurdles in the Northern Indoor Championships earlier this year – ran his first race over 80m Hurdles at Trafford and cut three tenths of a second off his best time achieved in 2018 when he won his race in a new PB time of 12.33. U15 Nicky Saunders had a busy weekend as she competed at the Basingstoke Open Meeting on Saturday in Discus, Hammer and Javelin where she placed 7th in the Discus (1kg) with a throw of 25.56m, 8th in the Hammer (3kg) with a distance of 32.38m and 5th in the Javelin with 25.29m. The day after, Nicky was at the Trafford Open where she won the Discus (1kg) with 28.04m and finished 2nd in the Javelin (500g) with a distance of 24.59m. U15 Saul Sharp ran in the 1500m chopping a huge seventeen seconds off his previous best to set a new PB of 5.10.34 in the 1500m. 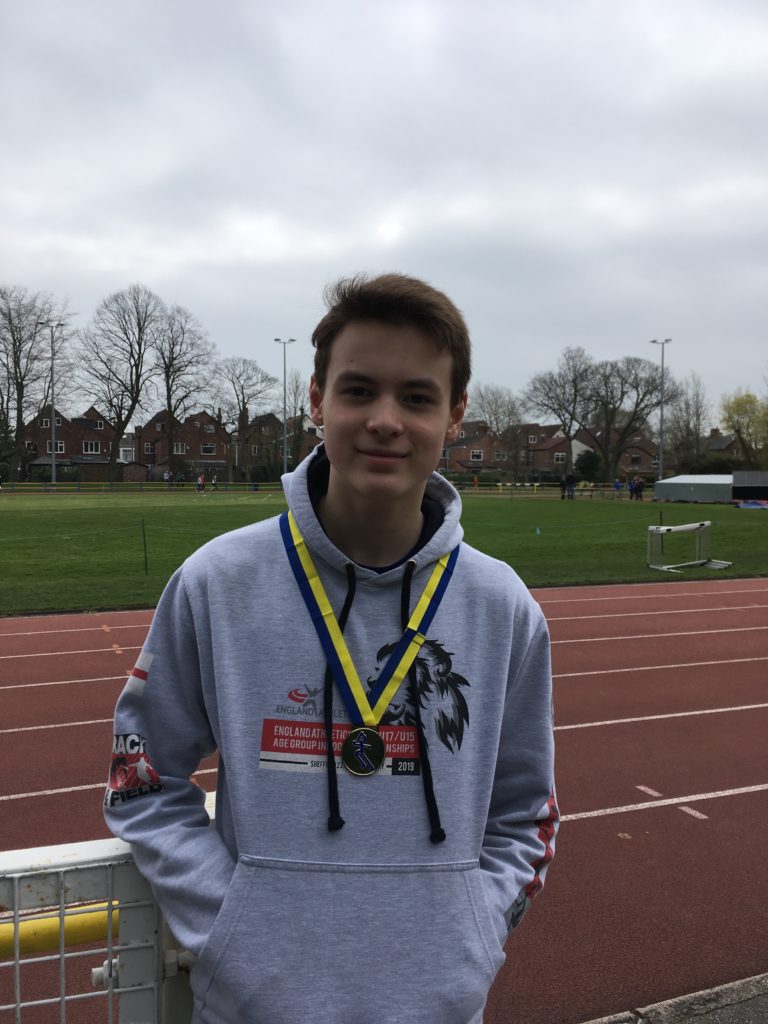 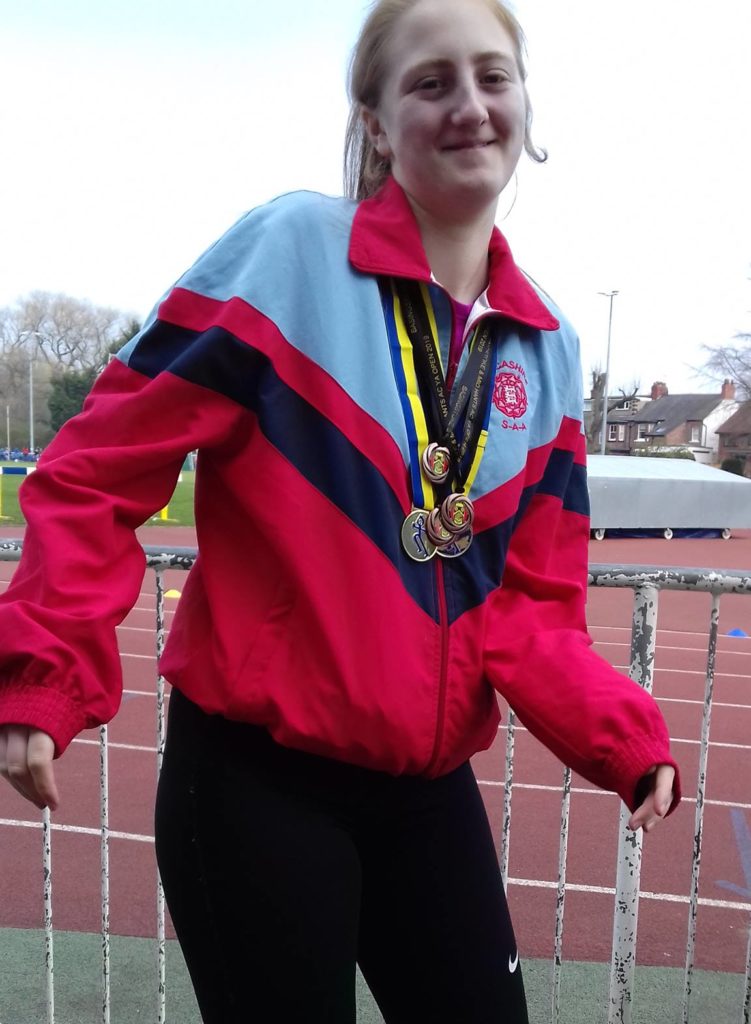 Tony Balko (V50) was at his third Fixture in early season at Wakefield which wasn’t the best of weather for throwing where he won the Shot Putt with a distance of 10.48m and the Hammer with 37.29m as well as placing 2nd in the Discus with a throw of 34.31m. Matthew Heywood has moved up to U17 this year and finished 2nd in the Discus with 26.66m, won the Hammer with 45.55m and placed 2nd in the Shot Putt, throwing 8.30m which was a good solid opening to his forthcoming season in the UKYDL Upper Age Group. 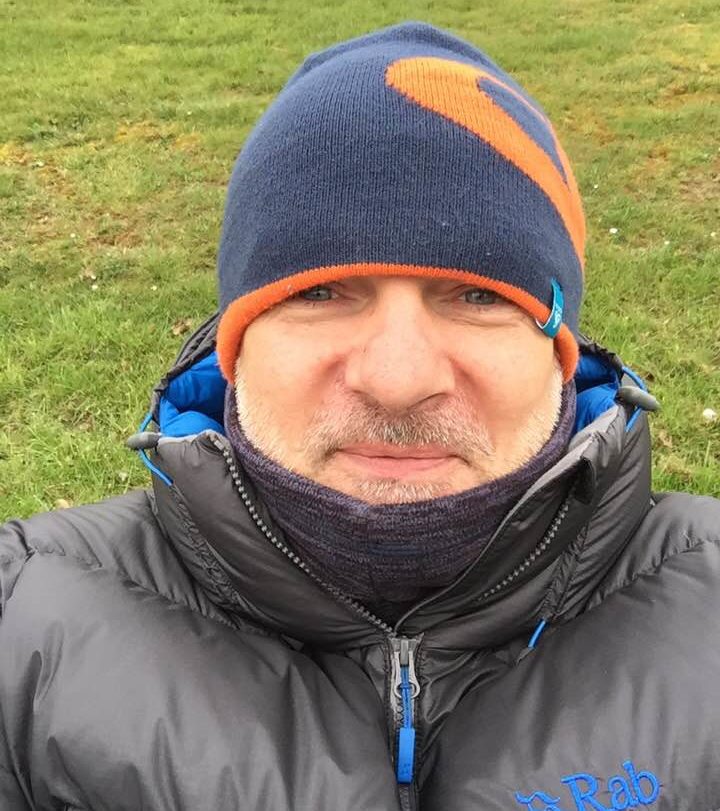 Andrew Knowles – Junior Endurance Coach at Blackburn Harriers – is training for a Half-Ironman in Majorca later in May and as part of his training, he entered the Ulverston Triathlon at the weekend which consists of a 400m Swim, 28k Bike Ride and 5.8km Run – an event which featured two hundred and forty two finishers, won by Tom Rigby in 69.43.

Andrew had a solid day coming home in 36th place with a combined time of 85.08 and told the Harriers “Having a ‘upset stomach’ all week put even starting in doubt, but I really needed to race with Majorca Half Iron Man 5 weeks away it was essential to test myself and equipment in race conditions, It’s been Two and a half years since my last triathlon, and there certainly were a few nerves, so a few deep breaths and here goes, exciting the swim in front of the super-fast ‘Tom Rigby’ (he started 15 seconds behind me) was a decent start.

Out of the pool and running across the carpark ‘bare foot’ brought it all back, smooth transition and away on the bike, Tom flew past me like I was stood still, it was a tail wind out hitting 40mph a couple of times, it was a case of hold on tight! It’s an out and back bike course, so you can see athletes on the return journey into the headwind and it looked ‘grim’, so full concentration on the return pushing but not over cooking it. Off the bike onto the run, steady start and build was the aim, I felt strong thanks to chasing the Senior men on a Tuesday night all Winter. Result 36th from 180, in 1hr. 25mins, 7th Vet 50 from 48. Winner Tom Rigby 1.09.43. A couple of minutes adrift of the top few V50’s was a pleasing result”. 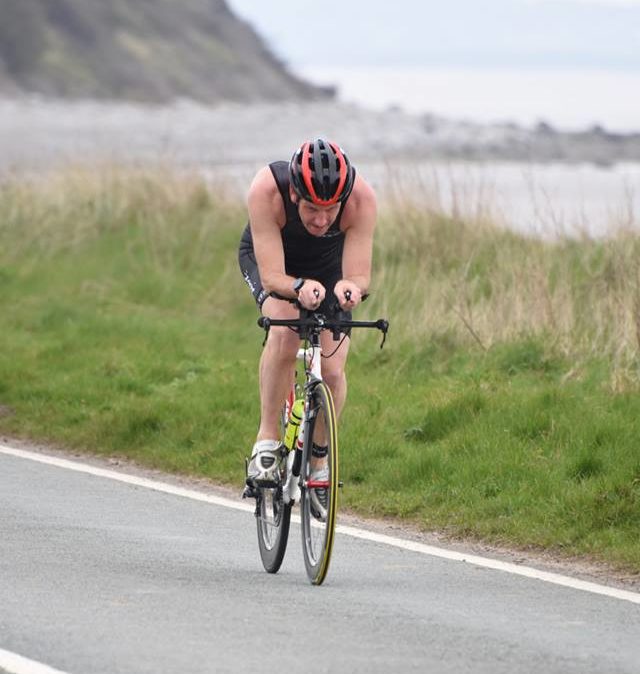 Great news to see Blackburn Harriers Dan Balshaw back running a road race after a long term lay off with injuries and illness as he lined up with over 300 other runners at the Fleetwood 10k. He ran his last race – a 5k – in July of 2018 and it was pleasing to see him have such a solid run in his first one back, finishing 5th overall in a time of 38.10 – the race being won by Josh Birmingham in 34.21, some three minutes clear of 2nd place. After the Race Dan spoke to the Club to tell us about his return  and said that it was “My first road race in 9 months to the day, over past 4-5 weeks I’ve been slowly building back up the training, so not too disappointed with the time, just need to get back in the rhythm and knuckle down with consistent training and hope the niggles and illnesses are done with.” 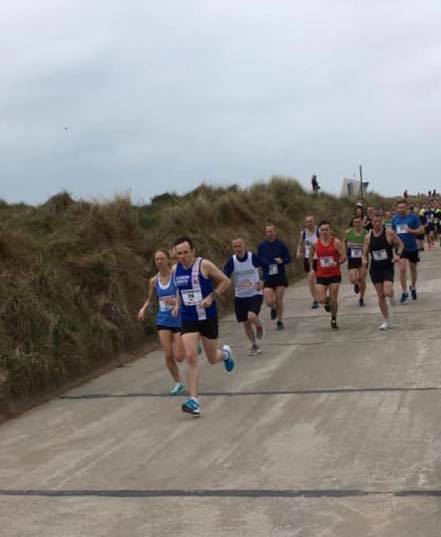 Well over three hunded runners in this race won by Shaun Heys in 38.46 on a course which was said to have a bit of everything and not the easiest.

Blackburn Harriers Mark Wilkin ran this one placing 33rd overall and clocking 48.15, a run which earned him the 3rd V50 place out of thirty nine in the same age category. 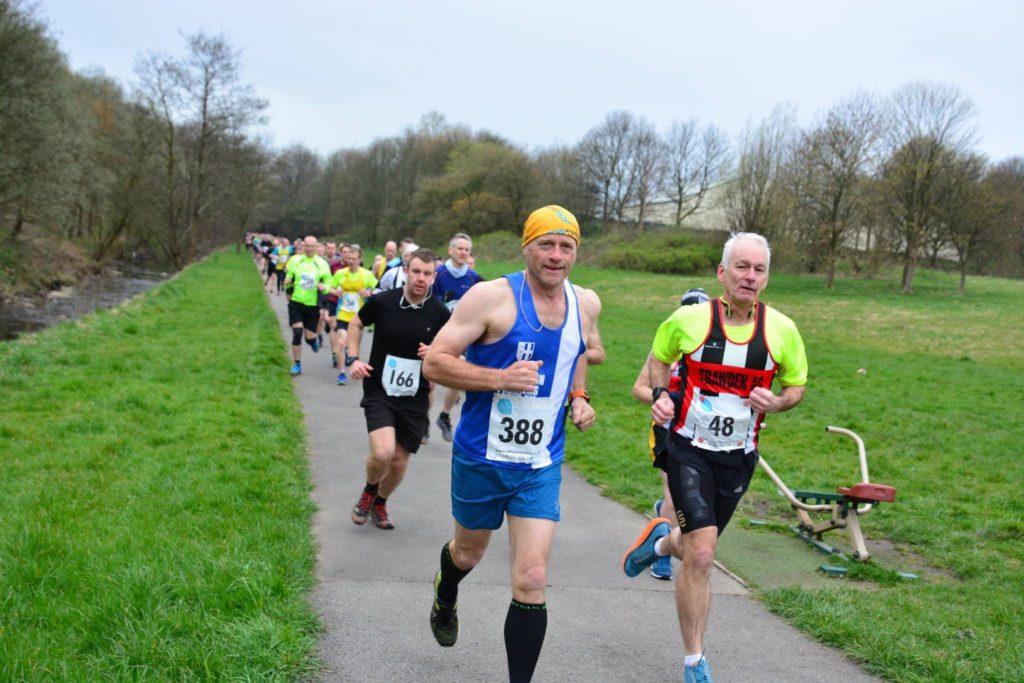