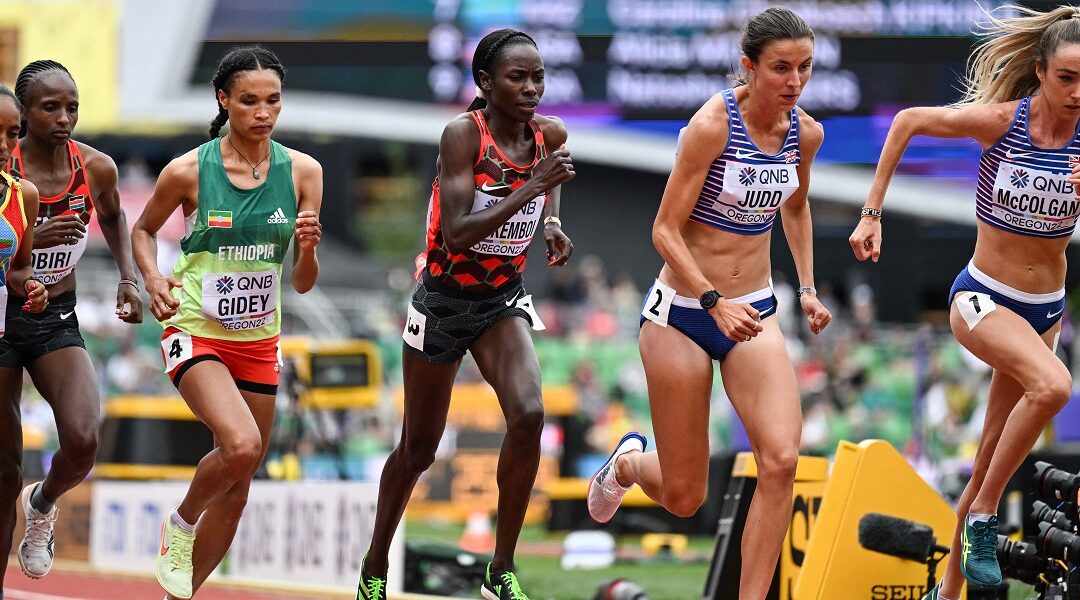 A big week for Blackburn Harriers athletes as they were out competing on all surfaces from Track & Field, Road and Fell and only one place to start and that is with the World Track & Field Championships in Oregon. A freak accident in the Pole Vault – the pole snapping during warm up – put Holly Bradshaw in real danger of a very serious outcome. Holly is made of tough stuff and has come through some real difficulties in her career, lots of them unknown and unspoken, still continued, still competed and at the highest possible level as can be evidenced by her Olympic Medal in Tokyo.Commenting on her social medai Holly gave an update about her situation “Gutted is an understatement but I truly believe these things are sent to test us and happen for a reason

Tomorrow I will have scans to check on my health as of course my goals now swift to the Commonwealth Games and European Champs….all being well

” Thanks for everyone’s support…2022 will not break me….it will make me

Our Club and its entire membership of athletes, coaches, officials and officers sends all our thoughts and good wishes for a full recovery and look forward if possible to see her competing again at the Commonwealth and European Championships. Saturday July 16th was the date of the Women’s World Championships 10000m Final featuring some of the fastest women athletes of all time. Lining up with them was Blackburn Harriers Jess Judd. Until 2021 she had never run a 10000m race posting times of 31.25.98 in the US (Aug 2021) and then securing the Olympic qualifying time by clocking 31.20.96 at the British Championships (June 2021). In the Olympic Games in Tokyo, in a race run in a cauldron of heat, Jess clocked 31.56.80 finishing in 17th position. In Oregon Jess had a phenomenal run – starting  with a personal best of 31.20.96 she ran a negative split, finishing with a massive new PB by three quarters of a minute as she clocked 30.35.93 in 11th place. This result puts her in 2nd place in the British National Rankings and 3rd fastest British woman over 10000m of all time. Post race Jess told the Club that she was “so,so happy” commennting also on her social media “30:35?! 11th in the World?! 3rd British all time?!

Honestly can’t explain what just happened. Thanks to everyone for getting me here in one piece, for putting up with me and my weird ways and just for believing in me when times got tough!

Loved getting a chance to give it everything!!

On to the road on Saturday evening July 16th at the Adizero Podium Races held at barrowford and featuring a Mile race, three 5k, two 10k races as well as a half marathon — (ALL RESULTS)

The Podium Mile had 21 athletes contesting including two from Blackburn Harriers – Daniel Bebbington and Stephen Walter. The race finished in a neck and neck battle between Sunderland’s Michael Wilson and Blackburn Harriers Daniel – both of them clocking 4.14 with Wilson getting the nod for the win. Stephen made his debut over the 1 mile distance and clocked 4.49 to place 9th overall. V40 Ben Fish had another top run as he went to number 6 in the 10k National Road Rankings for 10k with a seasons best time in the A Race of 30.45 in 7th place overall and 1st V40 in front of Russell Bentley (31.29) and Matthew Watson (31.30). This latest run of Ben’s was just one week after he went into number 2 in the V40 National Rankings for 5000m with his 14.53.5 clocking in the Northern League Premier West Division. Ben spoke to the Harriers after he had run saying “I felt good and training has been going well, especially with speed sessions. I felt if I could run sub 15 on a hot day last week in the 5,000m, then I could go sub 31 today. The lead pack quickly got away but it was too fast for me, I was in the second group but I could sense the pace wasn’t fast enough for what I wanted to run. After a couple of kilometres I pulled away from them and ran most of the race on my own, just picking off a couple that dropped off from the front pack. Very happy to get a decent 10k done as I have been disappointed with my performances over this distance in the past couple of years“. V50 Nick Gaskell had another cracking run – this time in the 10k B Race in which he finished in 3rd position with a seasons best time of 34.09 and not that far away from his personal best of 33.54 set back in 2018. U17 Dexta Thompson has recently set new PB’s at 800m (2.00.39) and 1500m (3.59.40) in the Final of the 1500m (6th) at the English Schools Championships. At the Podium he upped his distance and entred the 5k B Race, his current personal best being 16.23 run in April at Media City. On the night he set himself another new PB as he ran a time of 16.21 in 16th place overall and the only U17 in the Race. 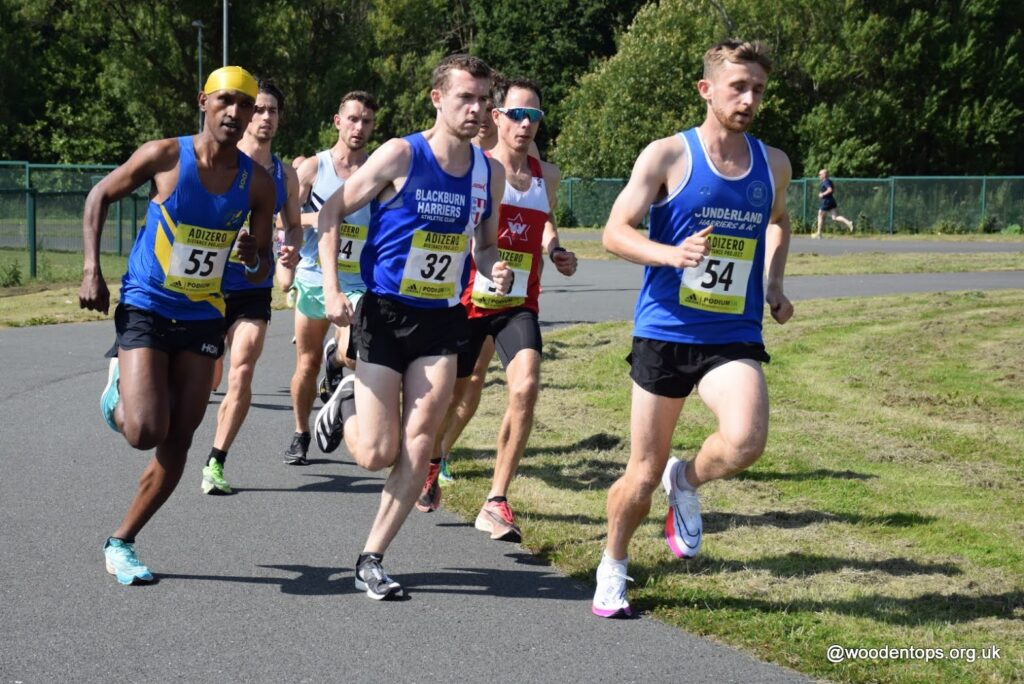 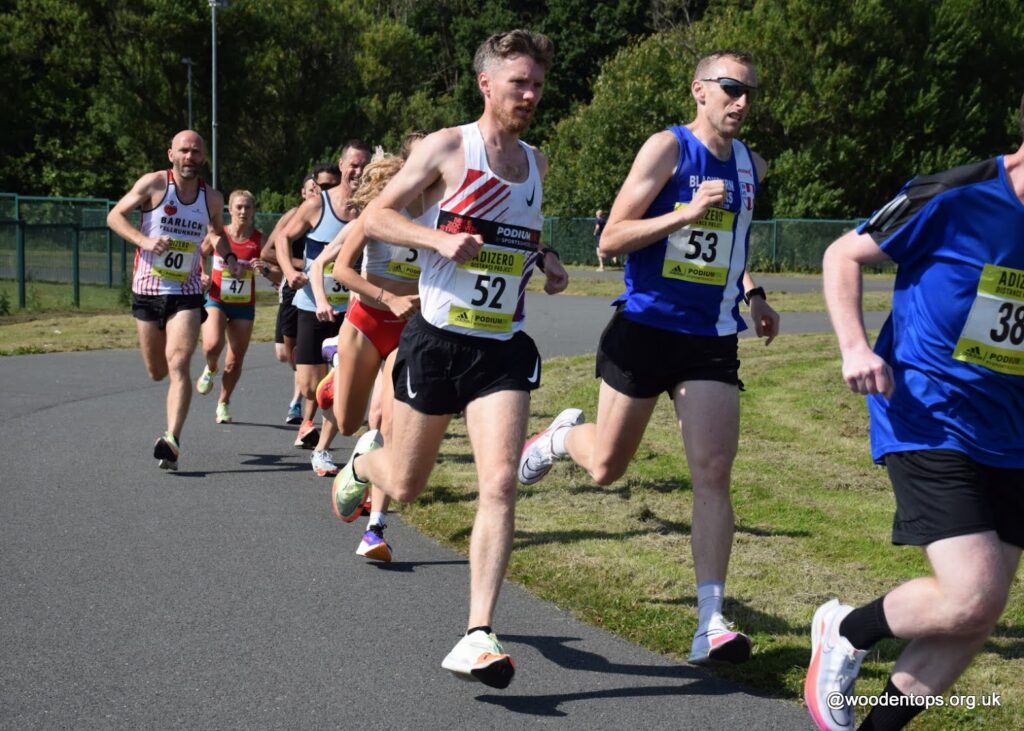 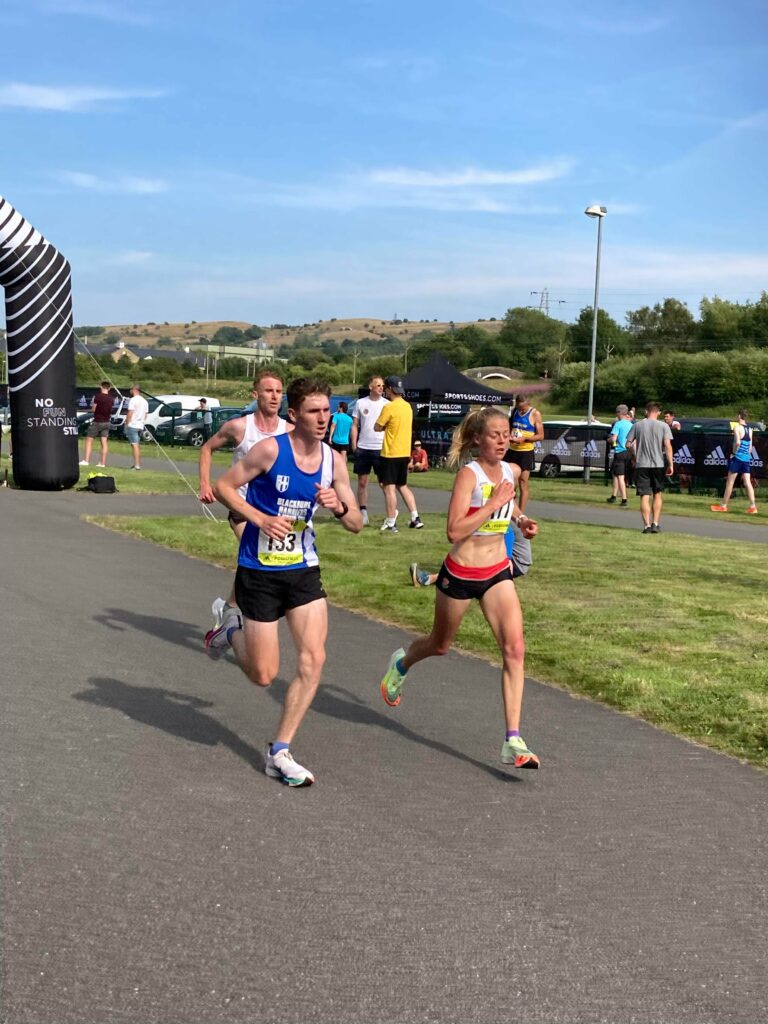 Back on the Track and this time at the BMC Regional Races at Loughborough on Wednesday July 13th with Rob Warner — (RESULTS). In his first outing over 1500m this season so far, Rob had a good run, placing 2nd over all in a time of 8.24.64 behind the winner Lewis Jagger (8.09.65). Speaking to the Harriers afterwards Rob told us that he was “pleased with the 3k, was bit of a strange race as it got strung out very early on when the lad who won it ran a 60/61 first lap! But I settled in well after that and closed well in the last 800m to take 2nd so quite happy with it overall!”.  Staying on the track, this time with Callum Davidson who travelled to Milton Keynes on Saturday July 9th for the MK5000 PB Special  — (RESULTS) — 5000m race in the evening and clocking 14.35.79 (13th) in the 5000m. 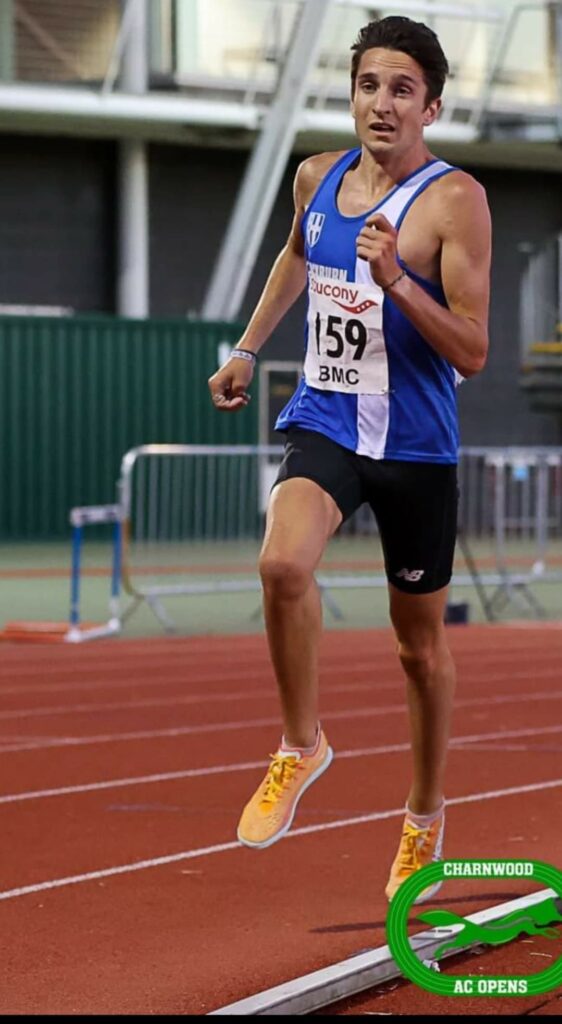 On the Road and this time at the Padiham Greenway 5k run on Wednesday July 14th – (RESULTS). The Senior Race had two hundred and thirteen finishers which was won by Thomas Corrigan in a time of 15.31. In 2nd place came Blackburn Harriers Mark Magee – who ran his first race in a long time at the Ilkley Half-Marathon at the weekend following injury – posted a time of 15.48. In the race with Mark were team-mates Nick Gaskell, David Almond and Ellen Sagar-Hesketh. V50 Nick continued with his very consistent form this year running 16.57 in 9th place and 2nd V50 behind Belgrave Harriers Paul Freary (16.30). V55 David was also 2nd in his veteran age category, coming home in 30th spot overall with a time of 19.16. Ellen was 4th in the Women’s Race running a time of 19.23 in 34th position and her second fastest clocking this year. Brother and sister – Alex and Charlotte Rothwell – were out in the Junior Races – (RESULTS) – Alex (U15) placing 4th overall and 3rd U15 in the U15/U17 Race with a time of 10.30 whilst Charlotte (U11), running in the U11/U13 Race came placed 34th overall and 9th U11, running 8.58. 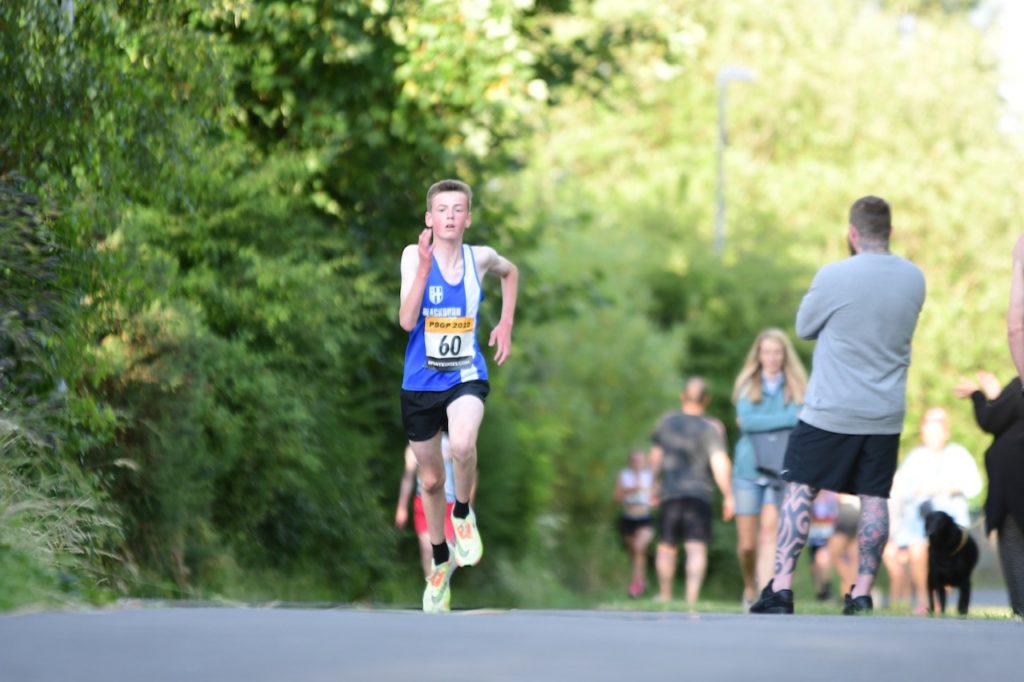 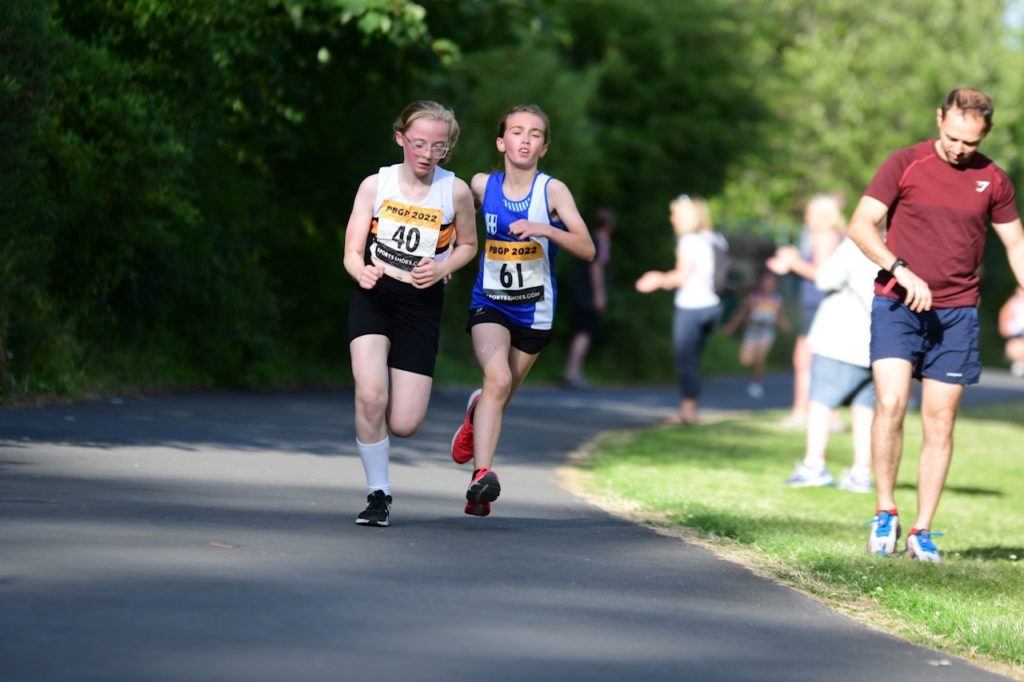 Moving on to the Fells at Beater Clough with Blackburn Harriers John Horrocks in a race covering 10.9k and 610m of climb. John had a very good run to finish 4th overall and told the Club after he had finished that he .”Had a good run out at the beater clough fell race finishing 4th overall. The race starting just out side todmorden, beater clough (only the 2nd time it’s been run) had a mix bag of everything tonight from scrambling climbs, rough terrain to very fast decents covering just over 6 miles and 2000ft. Visiting beater clough it’s self twice in the race made it tough as the climbs out are very steep. Good run out! Be back again for this one.”

At the Cracoe Fell Race, part of the BOFRA Series, Daniel Bretherton, who had run the 400m on the track the day before at the Mid Lancs League fixture at Witton Park, finished in 23rd spot overall, 18th boy in a time of 19.12 in the U14 Race. (RESULTS). 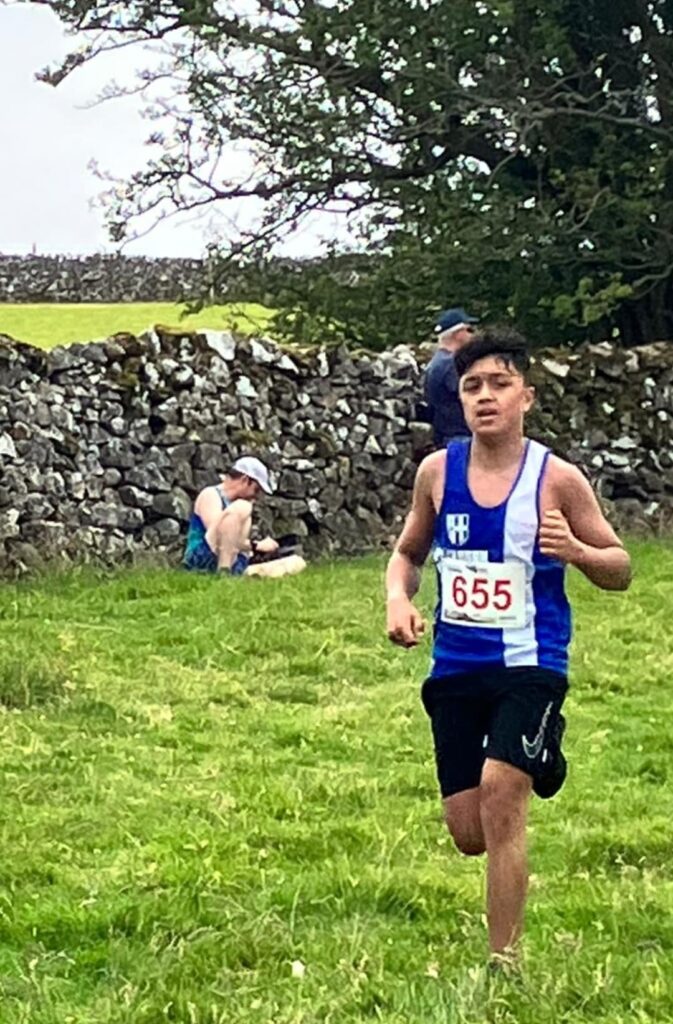 Finally, changing events and back in Track & Field at the Run Jump Throw Meeting in Sheffield on Wednesday July 9th where Blackburn Harriers John iLunga entered into the Shot Putt and had a good competition adding 36cms to his previous best to set a new PB of 8.99m. 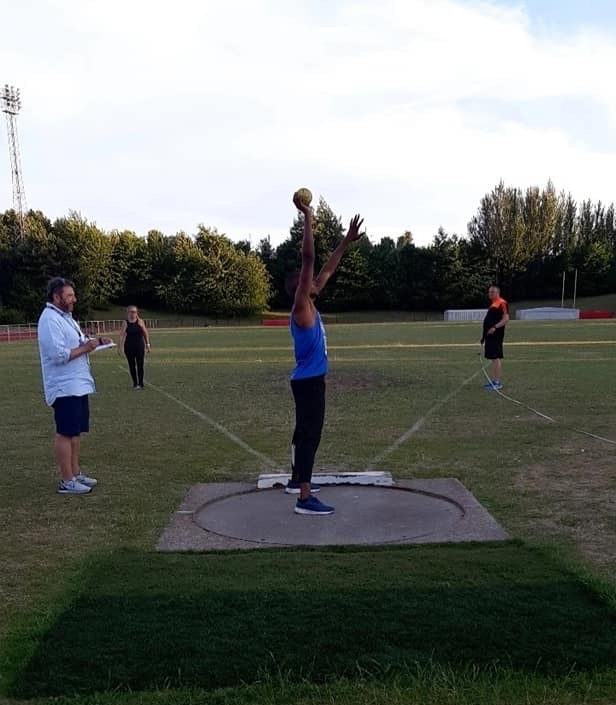