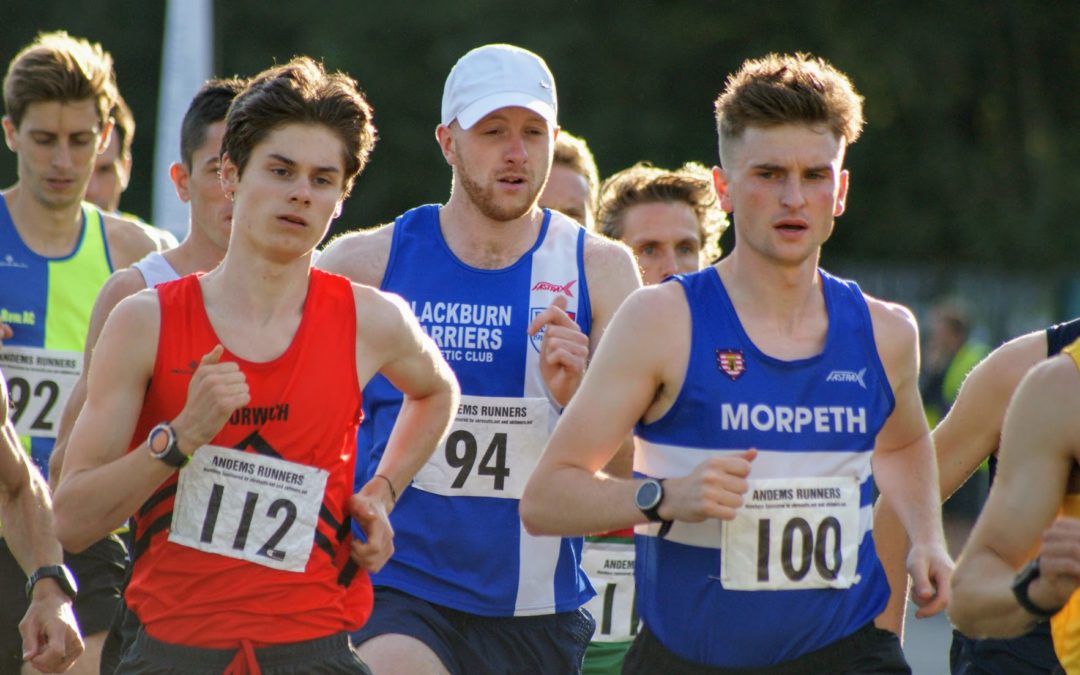 Some 5 months since most of our athletes in this country last competed in earnest. Olympics, Diamond Leagues, Local T&F Leagues and Championships, Road Relays and Road Races have been cancelled and all for the right health reasons. In these times, the health of those who not only compete, but Coach, Officiate and Volunteer, needs to be the paramount concern. Many athletes have continued to train in the most optimum way that they could so that they had a chance of being in the best possible shape for the eventual return. Field event athletes have struggled the most because of the lack of access to facilities and equipment, but sprinters, middle distance and endurance runners have also missed out on access to track sessions. Clubs have been very innovative in putting together different types of virtual individual competitions, some have even been able to turn them into team and club type events, all organised to try and maintain some semblance of focus and commitment to training in these very strange, but dangerous times. A lot of credit also goes to Coaches who have had to learn to work in ‘new ways’ if you like to keep engaged with their athletes whilst abiding by lockdown protocols.

In the end, there is nothing like competition. The anticipation of race day, of working out who is on the start line, who to be aware of, what’s the course like, what’s the weather going to do? Pre-race food and preparation, getting there on time to warm up properly, trying to stay relaxed and in control of your nerves and emotions. Race day comes round and as you approach it, you realise this has the potential to produce something special as top quality athletes line up to do battle at the Podium 5k, where it is rumoured that the British record may be under threat because of the standard of the field. Such is the day of the your first race in anger for so long. 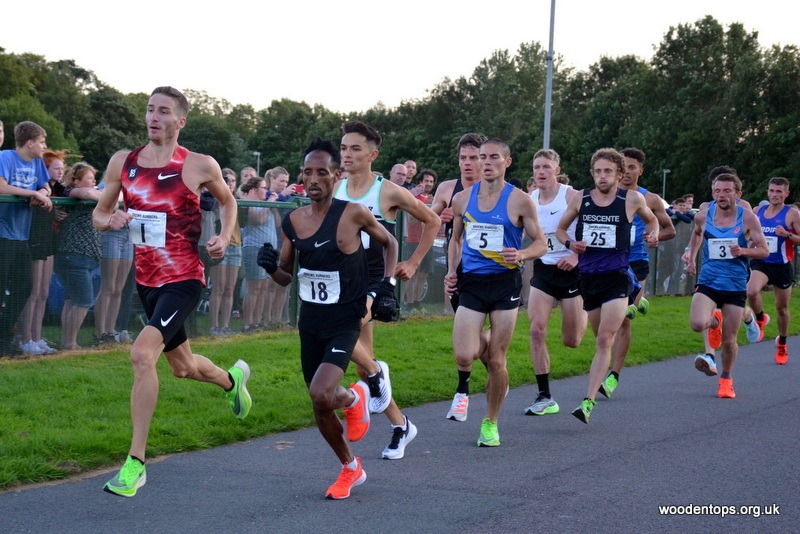 Many thanks to Jamie Mcllvenny & Peter Brown who posted these Photographs of the Podium 5k on Facebook.

Six Races take place on the night which are graded — Sub 19minutes (22 athletes) — Sub 17.30 (20 athletes) — Sub 16.00 (21 athletes) — Sub 15.15 (24 athletes) — Elite Women’s Race (29 athletes) — Elite Men’s Race (28 athletes). There were 22 runners in the first Race – Sub 19.00 – which produced a winning time of 16.32 by Blackheath’s Mark Cage with only one runner outside 19 minutes. Spenborough’s Tom Dart wins the Sub 17.30 Race in a rapid 15.55 as Blackburn Harriers Annabel Ralph was the first woman home in a new PB time of 17.28. Afterwards Annabel summed up her Race, telling the Club “Did not expect to get the time that I ran. Knew right from the start that I would probably be running the race on my own in the wind and accidently didn’t run on the race line. Any way at least it was an official PB and next time I race 5K I surely should run faster than I did yesterday fingers crossed”. 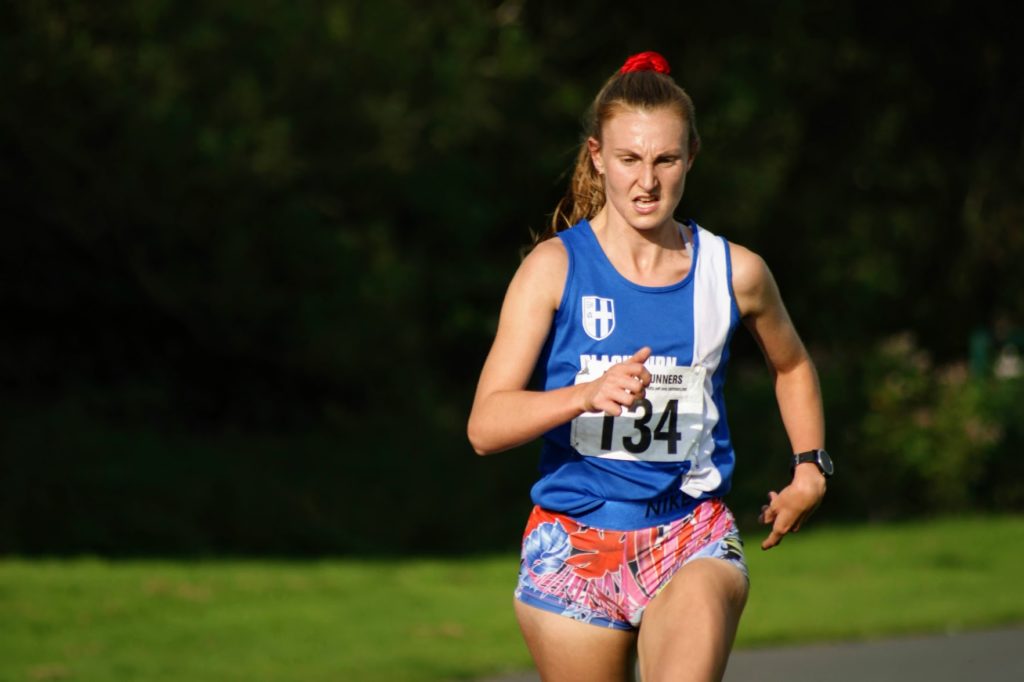 Third up was the Sub 16 minute Race which featured Blackburn Harriers – Ben Costello and Mark Magee. Gainsborough’s Jordan Skelly  and Telford’s Daniel Connolly had a real battle which saw them separated by just one second at the finish, Skelly edging it in 14.48 to Connolly’s 14.49. Ben was on fire as he chopped a huge 21 seconds off his previous best to clock a new PB of 15.08 in 4th place followed in by Mark, also setting a new PB by 5 seconds running a time of 15.40. Following the Race, Ben spoke to the Club about the night telling us “Absolutely buzzing with that big pb and great to be back racing and seeing all the Blackburn lads run fast times”. Mark commented on his race too telling us “I had a plan in my head as to how I wanted to race but when I went through the first 1k in 2.57 I knew that was out of the window and it was a case of just hanging in there. I’m very happy to come in with a PB of 15.40 and it felt great to put that Blackburn vest on and get racing again!” 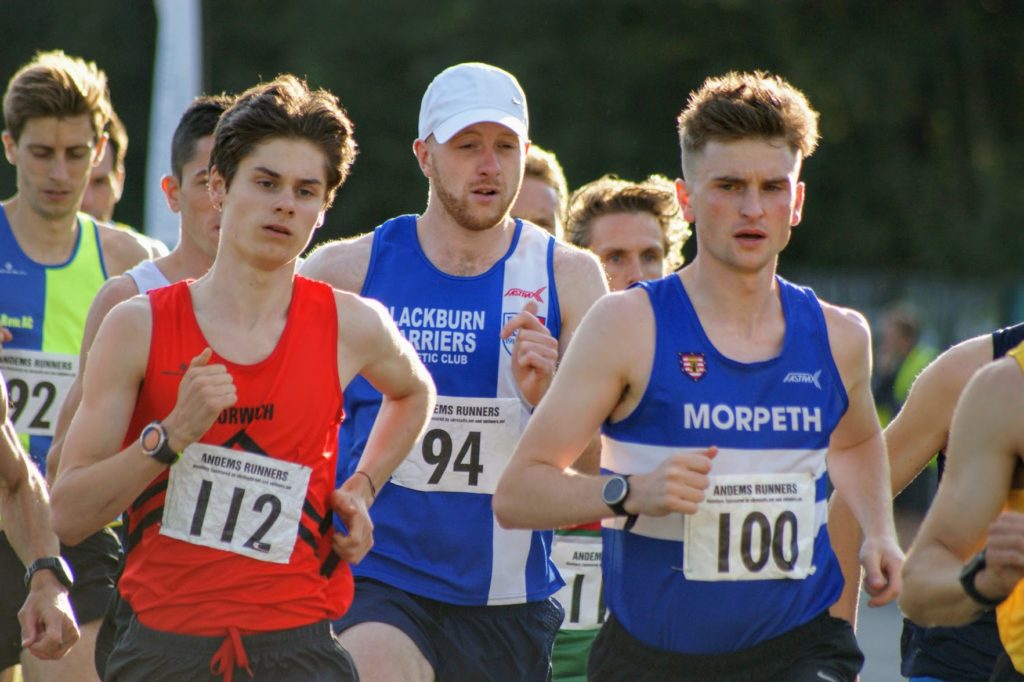 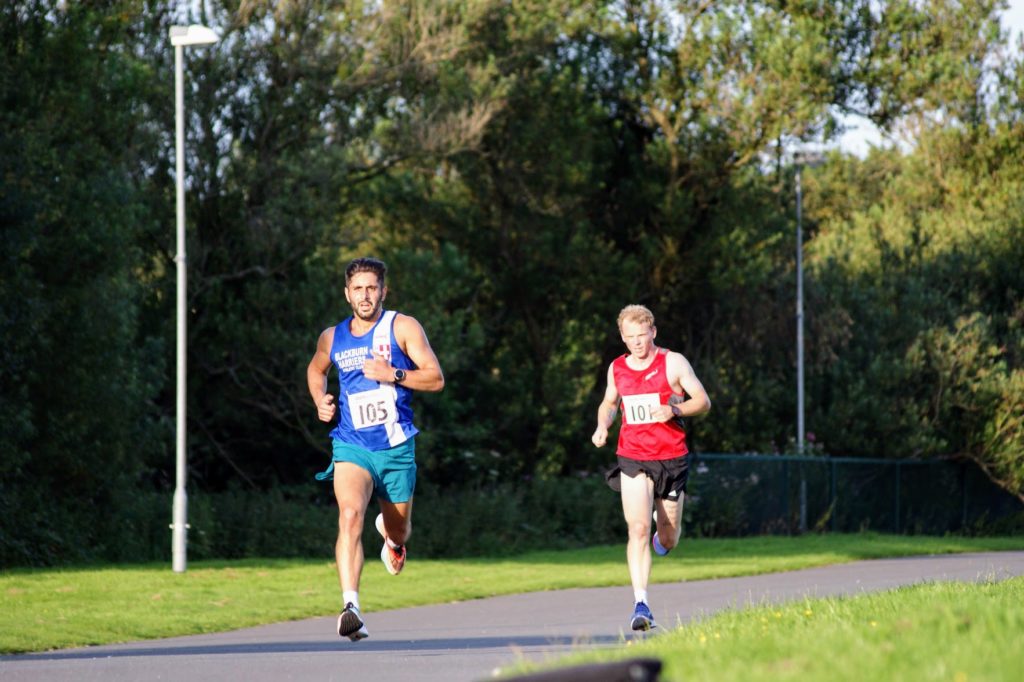 Four Blackburn Harriers entered the Sub 15.15 race — Tim Raynes, Ben Fish, Luke Betts and Callum Davidson. Preston’s Daniel Bebbington and Altrincham’s Daniel Racle battled the first two places out and again, just one second separated than as Bebbington took the win in an excellent time of 14.23 with Racle in 2nd spot (14.24). Tim kept the new PB’s for the Harriers flowing, chopping 14 seconds off his best to set a new PB of 14.37 in 7th place. Tim spoke to the Club afterwards commenting “Training has been going well and I’ve felt myself gradually getting fitter but, having not raced for 5 months, didn’t really know what to expect. Would have been happy to run under 15, so I’m absolutely delighted to come away with an outright PB. It helped having people around me for the whole race, and I had a good battle with Ben late on. Fantastic to see great runs from the Harriers across the races, showing the great depth we have”. 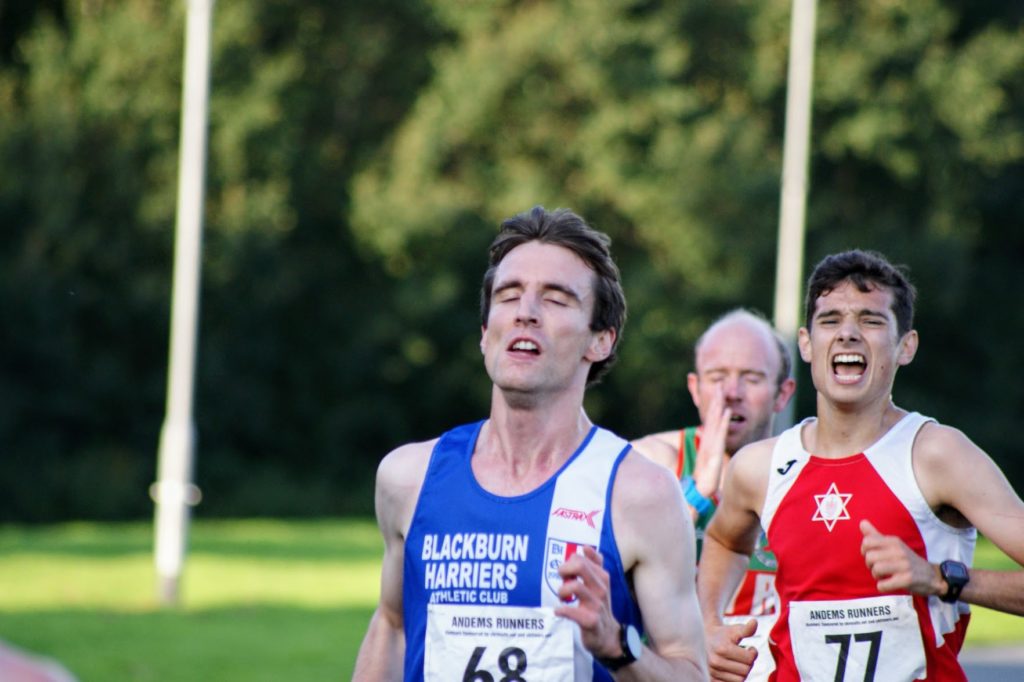 Ben was next home in 10th spot clocking 14.41 and whilst not a PB, it was 13 seconds quicker than he ran in 2019. Luke came home in 18th place with a time of 15.08, improving from his 15.19 clocking at the Podium in March which took place just before lockdown. Callum ran 15.49 in 23rd spot. Ben echoed Tim’s  sentiments and also commented on the nights events “It was great to be back racing. Very high standards; 14:21/22 winning the B race says it all. Race got off to a rapid start and I spent most of the first km at the back. Managed to dig in and had a good battle with a few runners at the end, Tim came flying past to run a splendid 14:36. I just managed to hold off Rob Samuel and get 14:41. Happy with that, my fastest 5k in a while. Great performances from so many of our runners tonight, easily showing ourselves to be one of the top clubs in the North”. 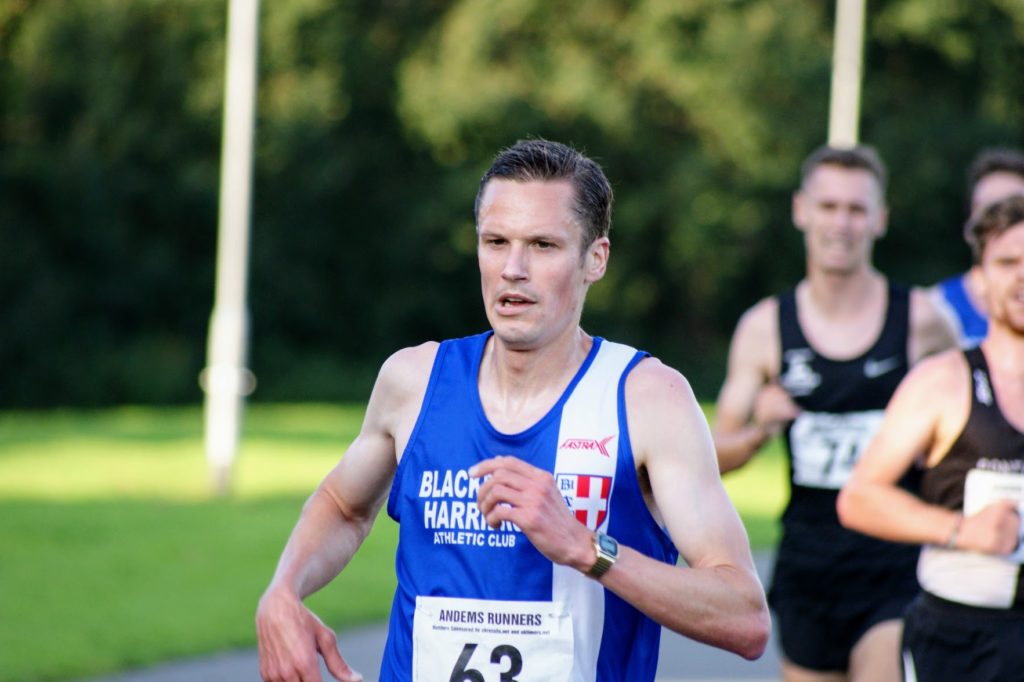 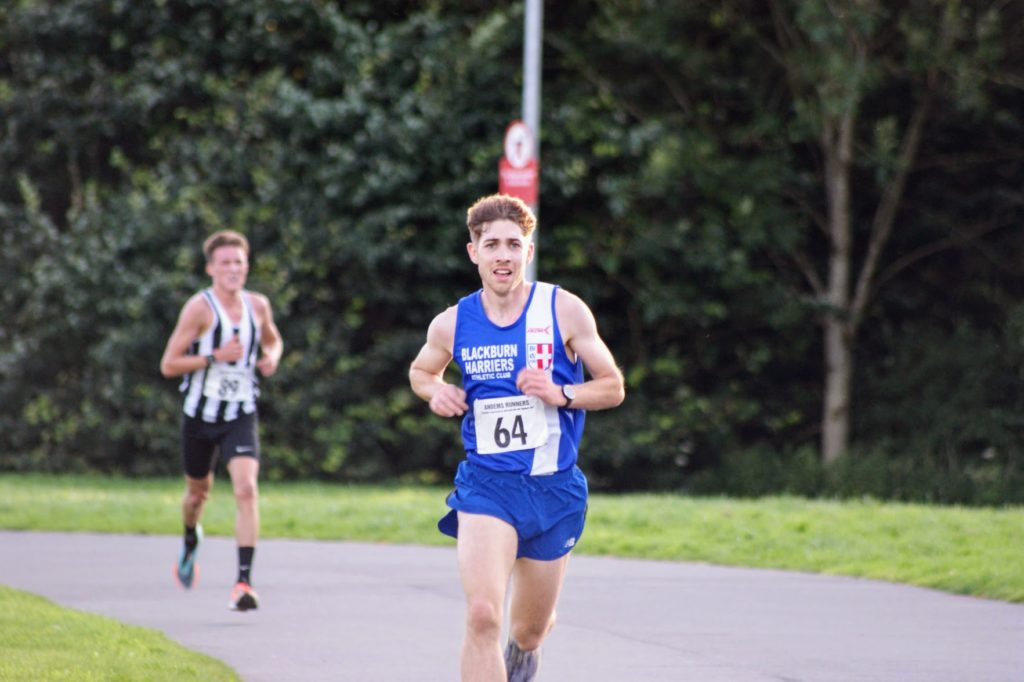 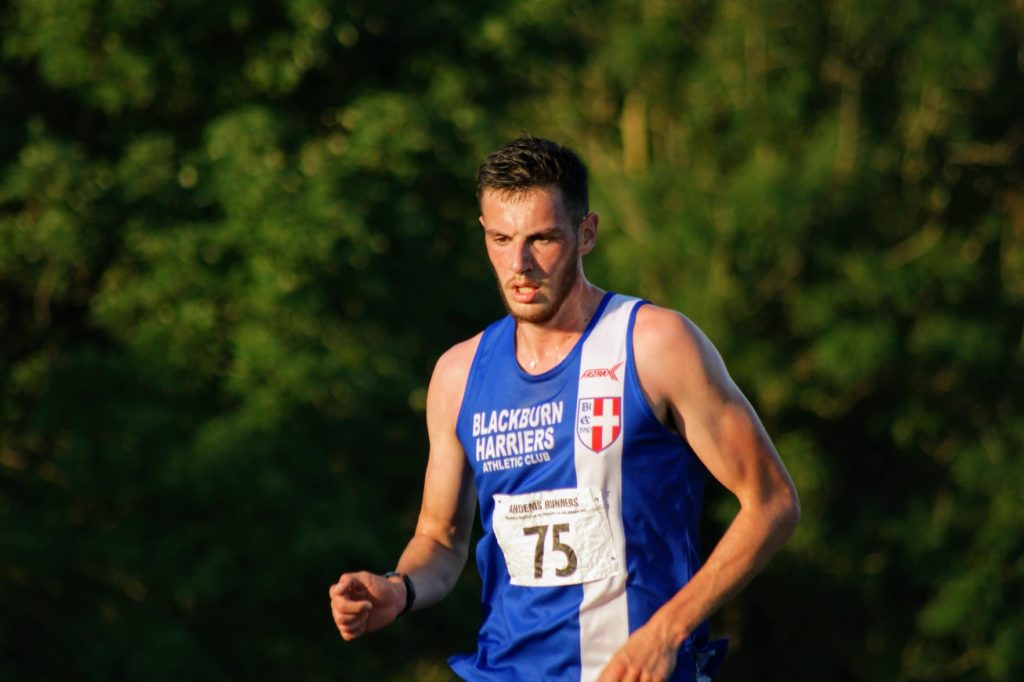 The Elite Women’s race was packed with talent featuring Blackburn Harriers Jess Judd, which was won by GB International Beth Potter in a time of 15.24. Jess, another GB International was running a specific 5k Road Race for the first time ever clocking a great time of 15.36 in 2nd place, followed in, just one second further back by yet another GB International – Swansea’s Verity Ockenden in 15.37. Jess was speaking to the Club following the race and outlining her thoughts about her first race in such a long time, telling us that “I’m a bit disappointed as I just felt terrible from the start, my legs felt really heavy and I just never felt like I found a rhythm but considering how I felt I’m pretty happy with the result! I think it takes me a while to get going in races so its just nice to be back and hopefully this is a good start to my racing block”. 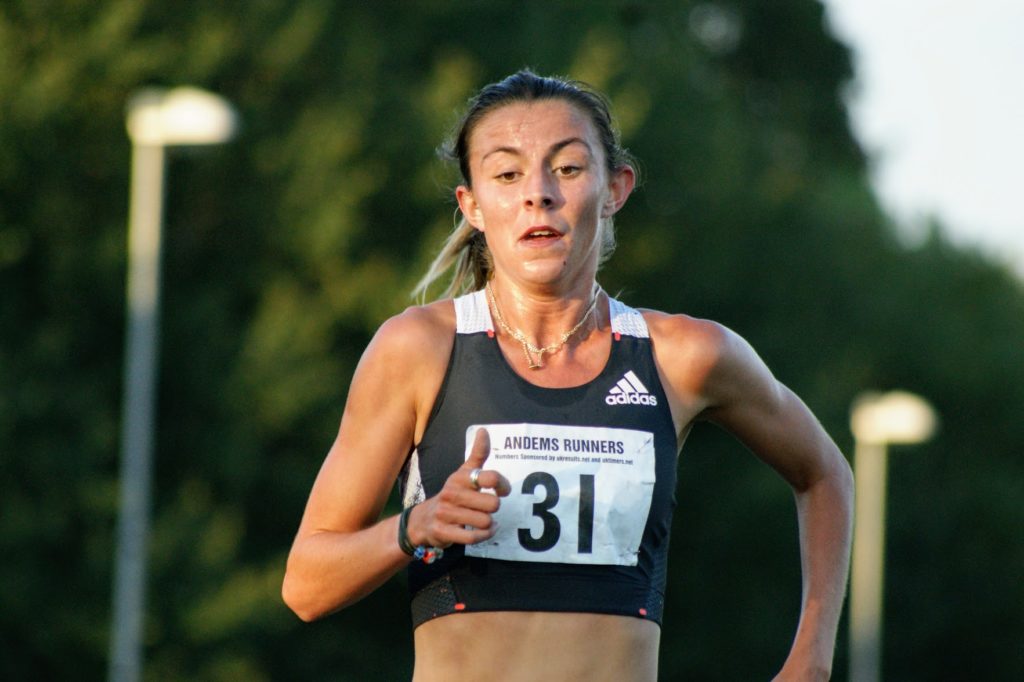 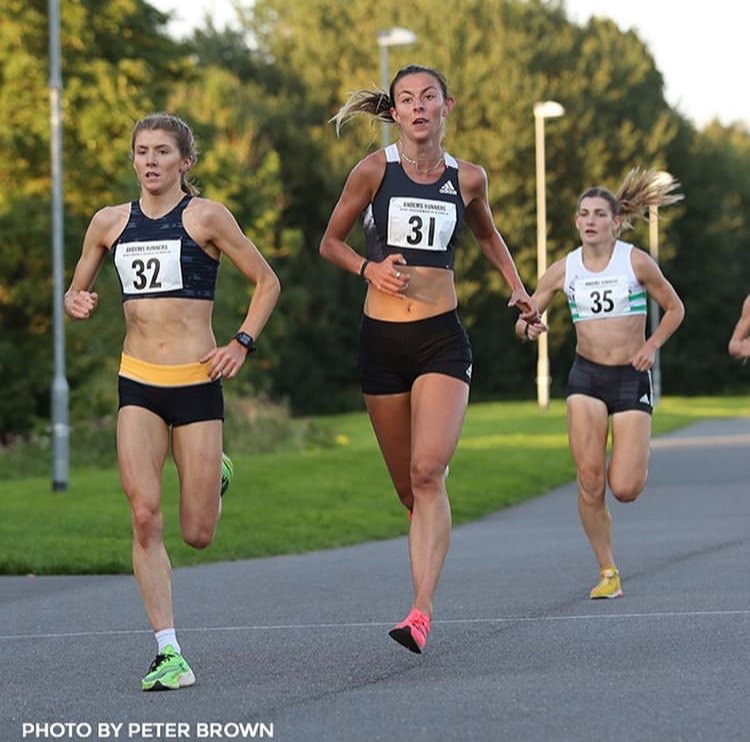 The Men’s Elite Race was also stacked which was amplified by the results as the first twelve finishers all came home in sub 14 minutes. GB International – Marc Scott (Cambridge & Coleridge) attacked from the start with Kent AC’s Alex Yee sticking with him. The British 5k Record standing at 13.27 was on the cards and it was indeed broken as Scott – winner of the 2019 Ribble Valley 10k Road Race in 28.32 – came home in a new British Record of 13.20 with Alex Yee in 2nd place (13.26) and Leeds athlete – Phil Seseman in 3rd (13.39). 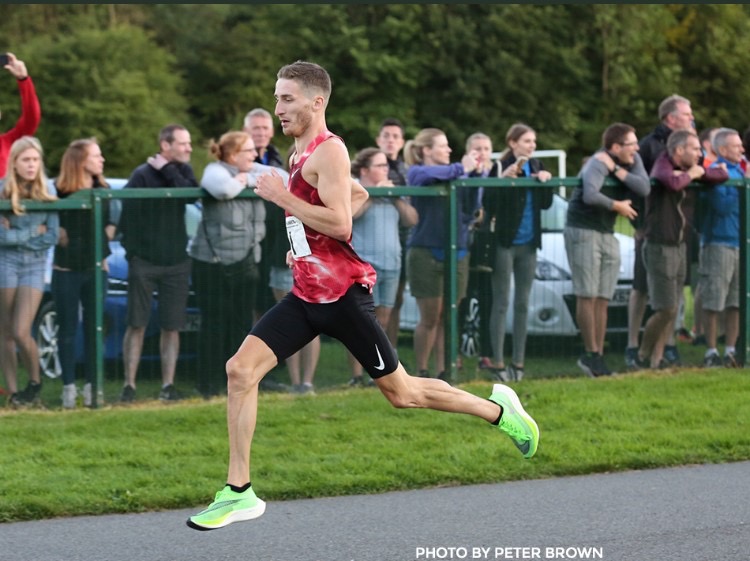 Blackburn Harriers Rob Warner went into the Race with a personal best of 14.41 set in 2019 at the Armagh 5k and ran really well again to set a new PB by nine seconds of 14.32. After the final Race we spoke to Rob who told us “Well done lads, class racing from everyone! Was hoping for better last night, but can be difficult to know what to expect after having so long off racing! Was a crazy race to be a part of but would have liked to have been more competitive in it. Saying that, I did get a road PB so not the worst race I’ve had at the end of the day!” 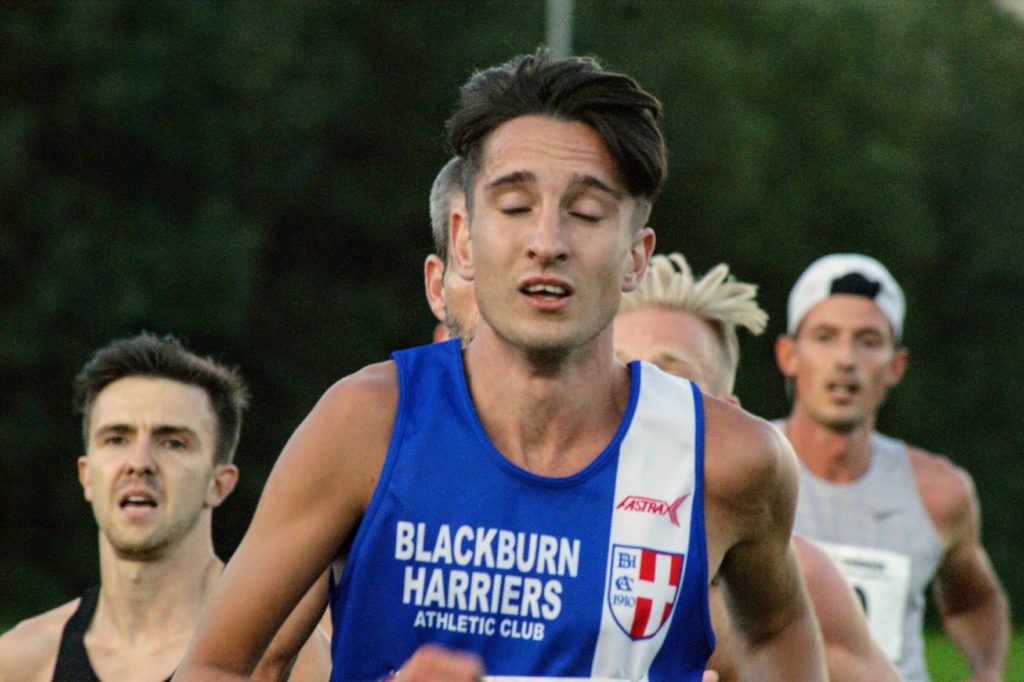 Blackburn Harriers Senior Throwers – Anna Peers and Tony Balko took the opportunity to come back into competition at Trafford – one of the events that has been put on as part of Engaland Athletics “phased return to competition”.

Anna was straight out of the blocks as she won the Shot Putt (4kg) with a distance of 11.11m which wasn’t far away from her personal best of 11.38m. On to the Discus (1kg) where Anna was first Senior Woman in Group 2 with a good throw of 39.23m for her second event of the day telling the Club that it “Was great to be finally back at a competition and in the throwing circle. Happy with the result as in the current climate I haven’t had the chance to pick up a discus in months. It was great to see other Blackburn athletes there enjoying the competition”. V55 Tony was also in action in the Shot where he was just shy of a new personal best with his distance of 11.72m followed by a throw of 36.32 in the Discus in which he was up against three U17 athletes. Later Tony commented on the day saying that from a “Personal performance perspective, not bad given no throws training since June, but good to be back in the circle – a circle”.

On the Track U20 Ben Makin – a GB International Pentathlete – entered his first ever 800m Race and was up against athletes who had run sub 2.00 minutes, 2.00, 2.01, 2.02, and 2.03 previously, so no easy task. The outcome had Ben placing 3rd in an excellent debut time of 2.04.91, commenting after his Race ” just a good run out to start getting back on the track“. Four more Blackburn Harriers contested the 800m. Bottom age U17 David Holman went into his race with a personal best of 2.24.6 and run as top of age U15. In his first new age group race, David chopped a massive 12 seconds off that time to set a new PB of 2.12.50 which is a testament to the work he has done over lockdown. Another bottom of age U17 – Abigail Stratton – entered her 800m Race with a personal best of 2.36.6 from 2019 as an U15. Like David she smashed that to pieces clocking a new PB by over 14 seconds to post 2.22.12 in 4th spot. Brother and sister U13 Matthew and U15 Keira Haxton ran the 800m too which resulted in Matthew winning his Heat in a time of 2.36.57 which was his first attemept at the distance on the Track. Keira drew the short straw on the day as she was up against it in here race with all of the athletes in her race having faster personal bests. It was a good opener for her though as she clocked 2.37.23. 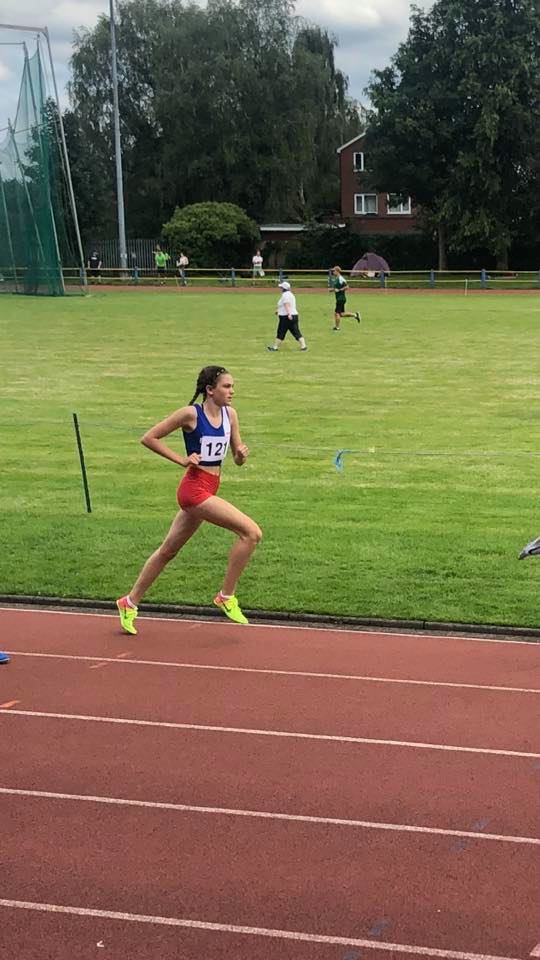