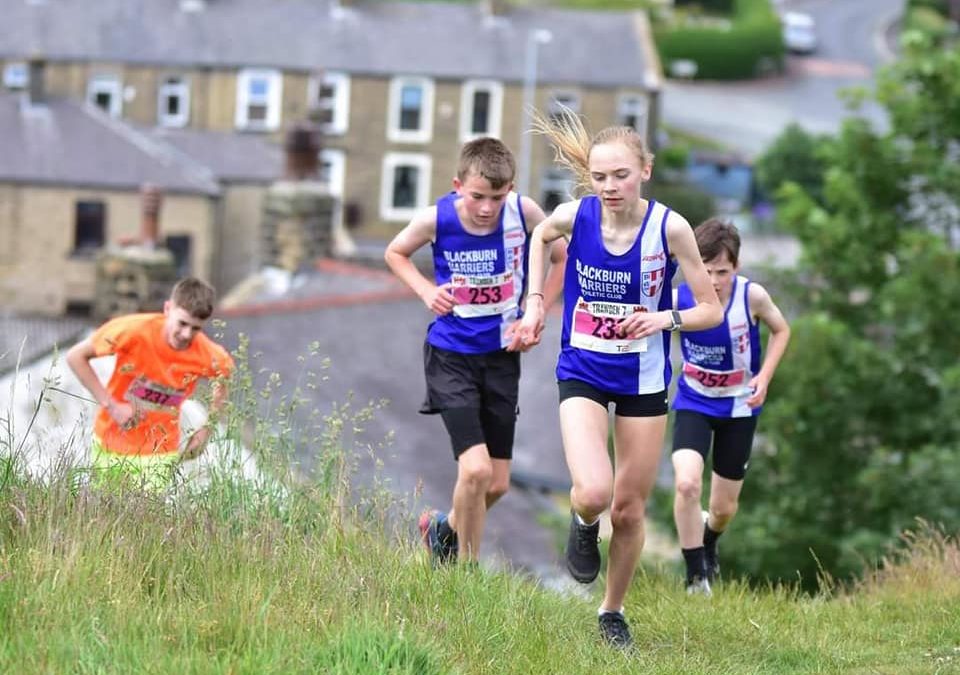 The Lakesman full distance triathlon consists of a 2.4 mile open water swim, a 112 mile bike ride, finished off with a marathon (26.2 miles) and it was this race that Mark Taylor chose to make his debut as a Blackburn Harrier – hardly one for the faint hearted. Mark who is a V45 had a very good day placing 5th in the Vet category 45-49 (35 in total) and 37th place overall. 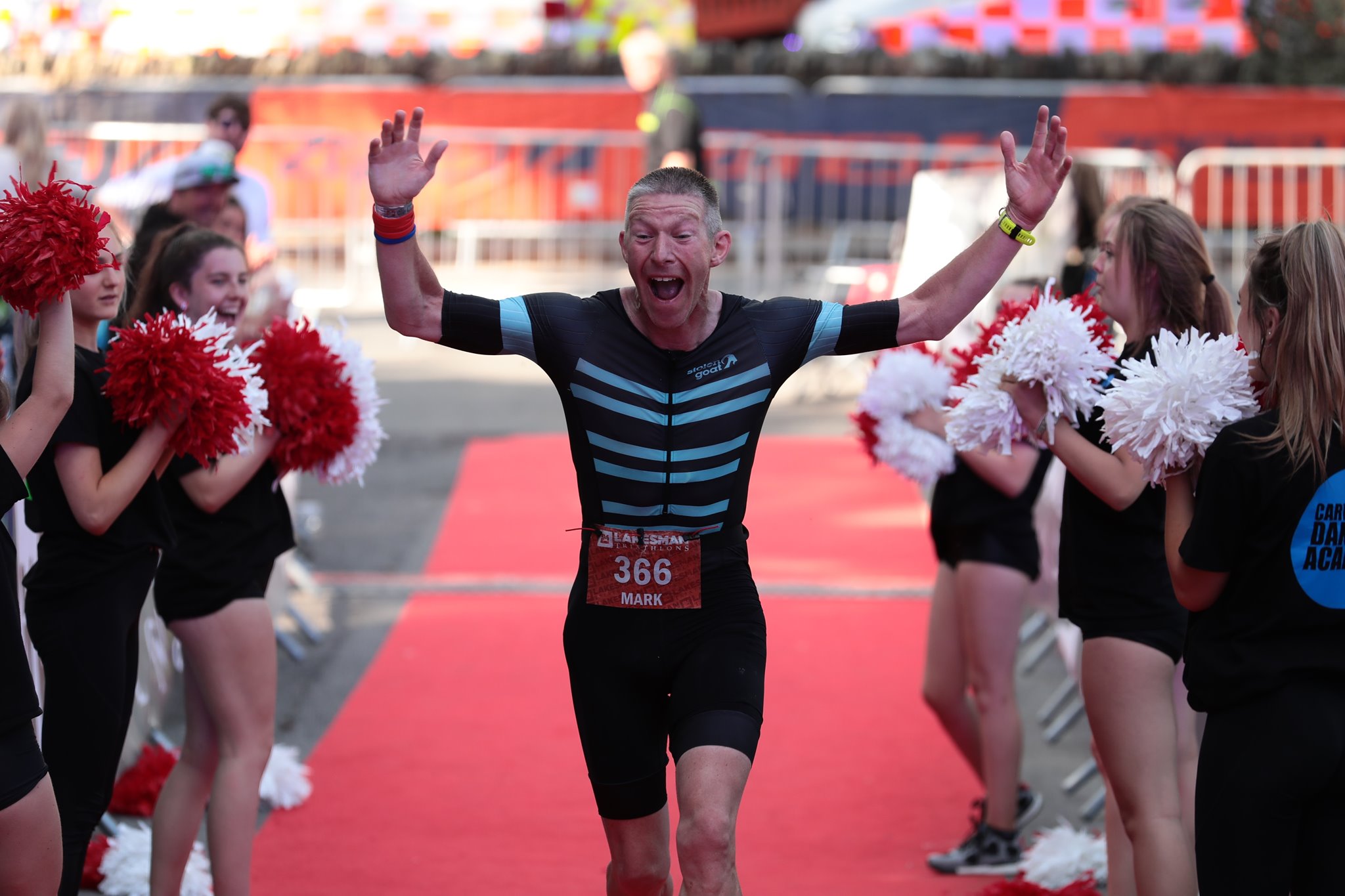 After the event, Mark gave the Harriers an insight to his day – “This was my second race at this event and this distance but disaster almost struck the day before the race when a paddle in Derwentwater to check the temperature resulted in a deep cut under my big toe from a sharp stone…I used my medical training to simply ignore the flow of blood for the rest of the day!

The swim is my weakest discipline and I was relieved that at the 6.30am start the lake was calm and I was happy to get round the 3800m course in 1 hour 15 mins which I would have taken beforehand given the lack of swim time over the last year. On the 112 mile bike leg the wind was blowing in the ‘wrong direction’ meaning that the usually fast coastal section of the ride was really hard work in addition to the hillier sections at either end, but I did it 5 hours 48 mins and still felt fairly good.

The marathon course consists of 5 laps around Keswick and by this time the weather was very hot and sunny, and people who had finished the half distance race were now out enjoying beers. Laps 1 and 2 were fairly uneventful (other than realising that the cut on my toe really was quite sore!) by lap 3 my pace was dropping, pain increasing and the heat was becoming a real issue. A dousing with water and ‘a good talk to myself’ in a portaloo later things came to again on the final two laps and I finished the run in just under 3 hours 45 mins, 22nd fastest on the day.

With transitions added my total time was 10 hours 58 mins, placing me 38th overall and 5th in my age category, a result I would have snapped your hand off for and a decent start to my racing as a Blackburn Harrier. Lakesman is a truly brilliant event and it felt ‘normal’ even with the covid precautions, and my entry is already in for 2022.” 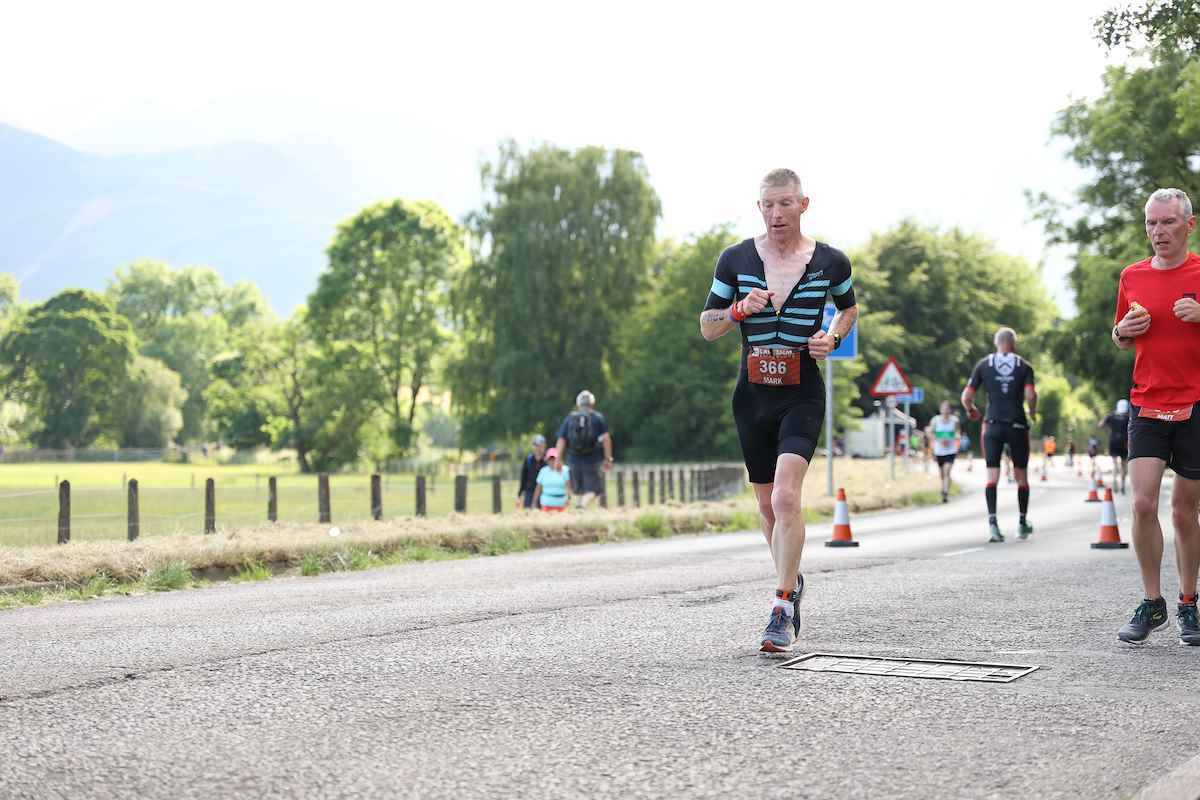 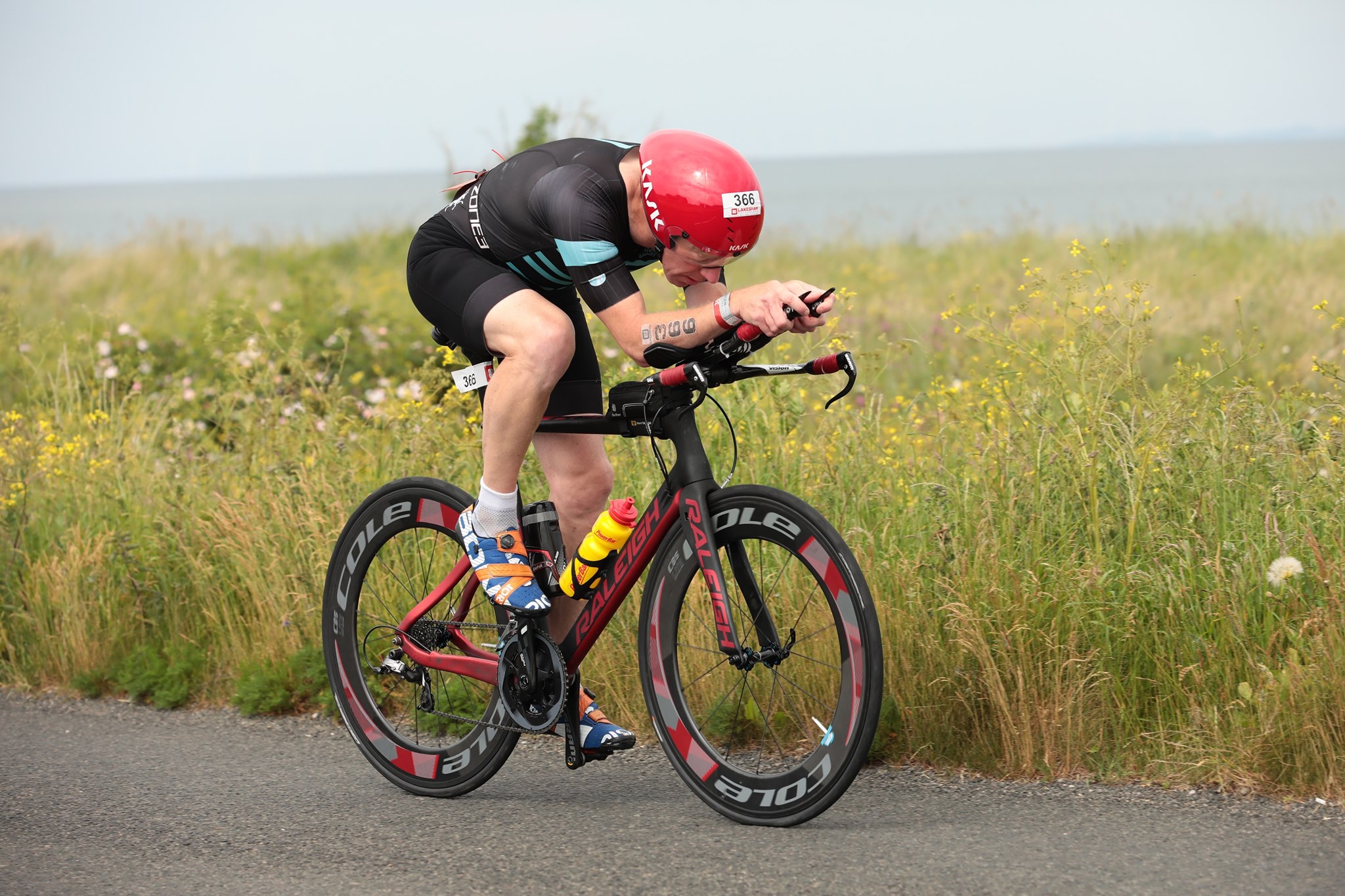 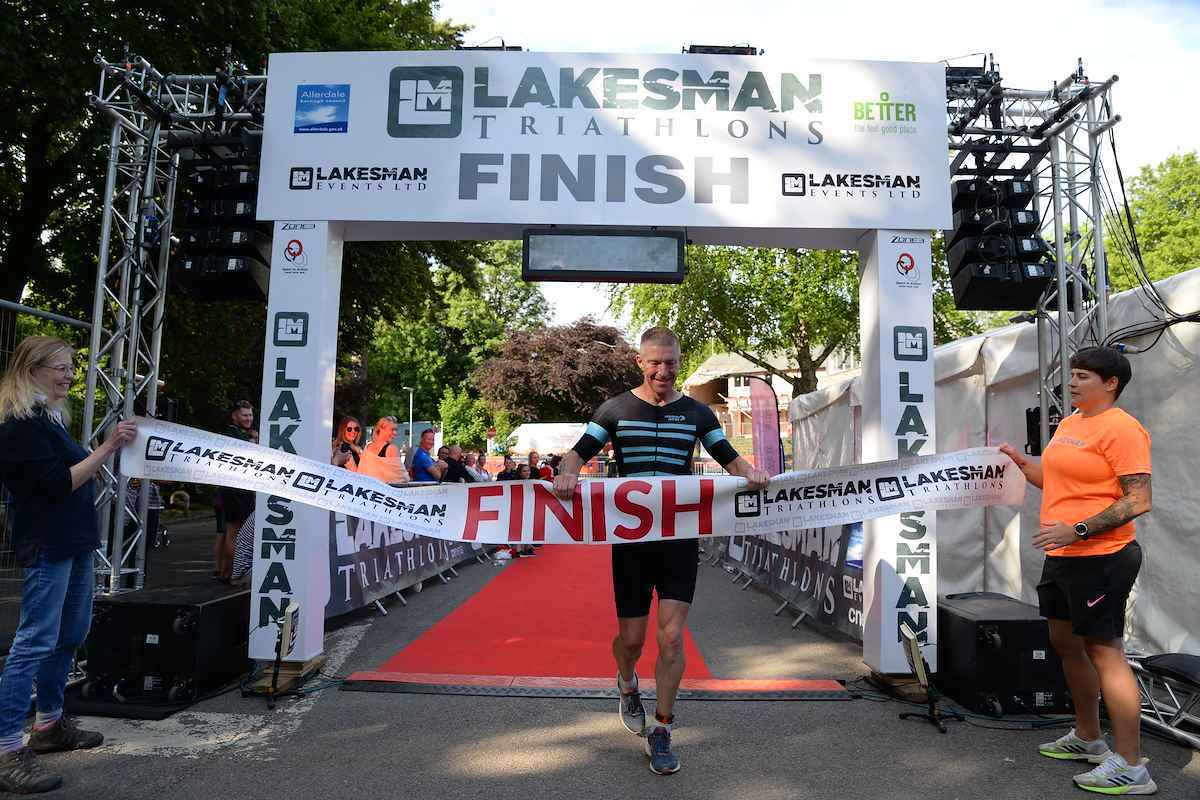 Blackburn Harriers Matt Wood – organiser of all those RunThrough Races up and down the country – has been getting his own legs moving and like Mark decided recently to go long – really long.

One Marathon would have been enough, but Matt decided on two as he ran the race from Goodwood to Winchester – a total of 54 miles. Out of over a 1000 runners, Matt came home in 258th place with a total time of 11hr 38.46 and quipped “Came 250th out of 1000ish but I was in around 50th place at over half way. Body fell apart and ended up walking for like 20 miles”.

Word has it that he has approached Blackburn Harriers Road Relay Team Manager to see if he can run a Long Leg in the September Road Relays at Redcar!! 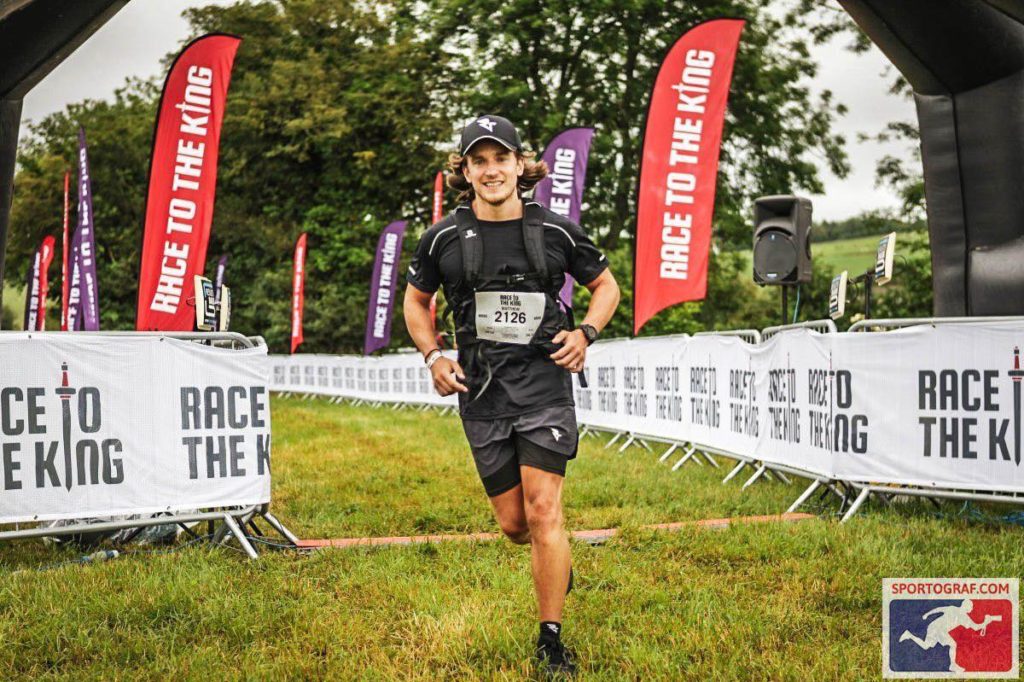 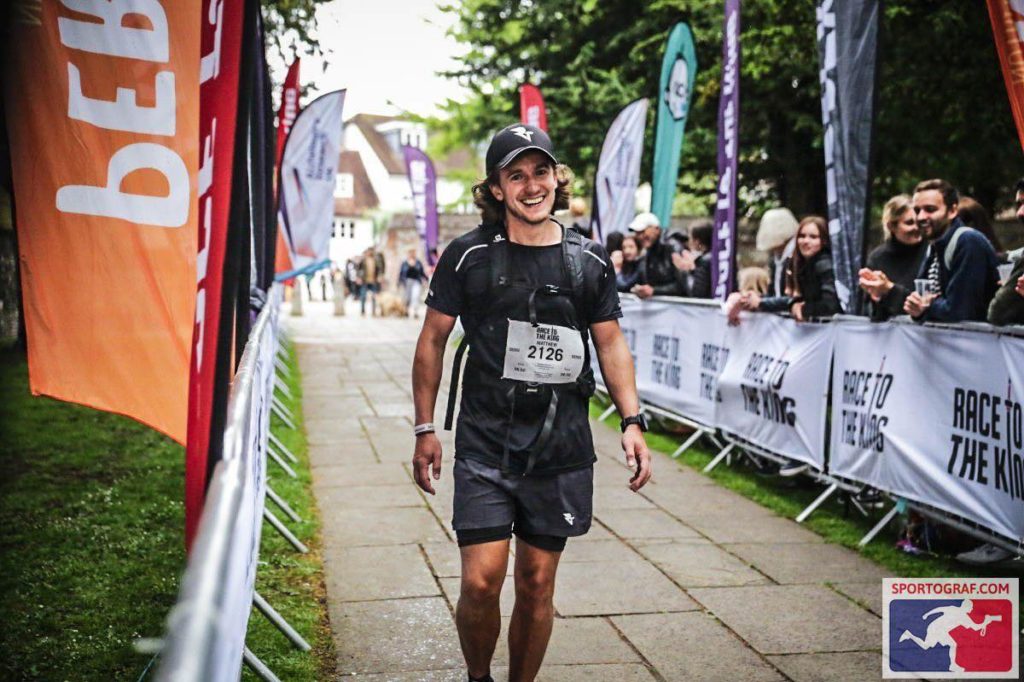 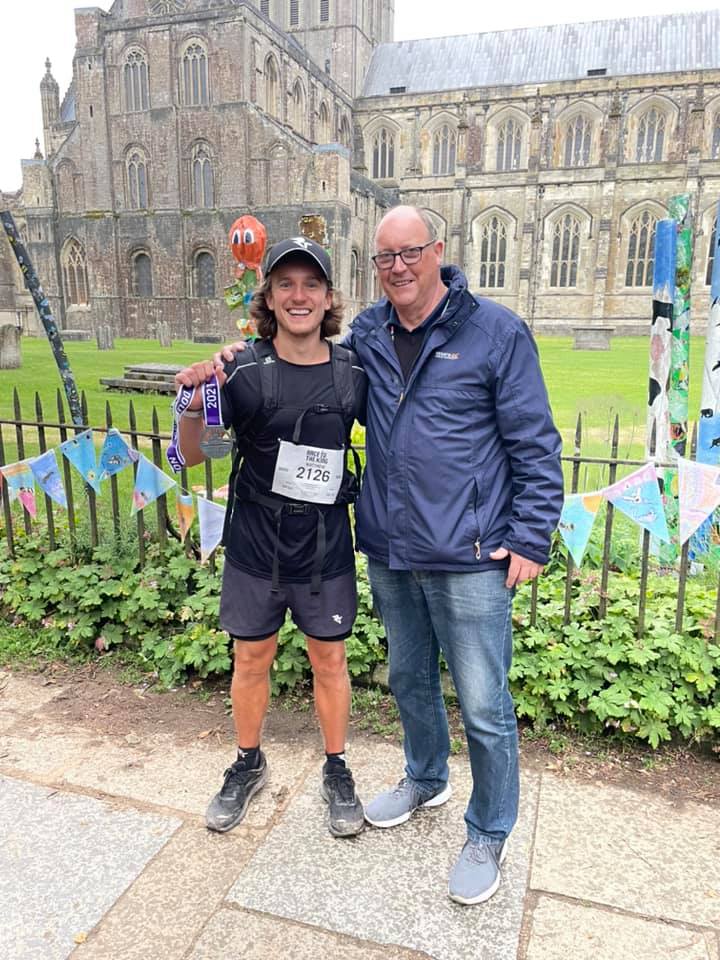 Matthew Smith was competing for Lancashire for the first time on the track in the Regional Combined Events at the weekend and had a pretty good day considering he’s just been out of isolation from having Covid.

The competition consisted of five events – 80m Hurdles; Shot Putt; Long Jump; High Jump and 800m as the final event. He kicked off with a 15.0 second run in the 80m Hurdles, threw 6.76m in the Shot Putt, set himself a new PB in the Long Jump with his leap of 4.80m, cleared 1.68m in the High Jump and clocked 2.24.3 in the 800m.
On the day Matthew placed 6th overall with a total of 1976 points and recorded the best performance of the day in High Jump and was 2nd in the 800m, the winner, being the only one running faster. Pretty good day alround, especially after receiving the news that he has been selected for the High Jump at the English Schools Championships – the fourth Blackburn Harrier to be selected this year, the others being Matthew Heywood, Matthew Ramsden and Abigail Stratton. 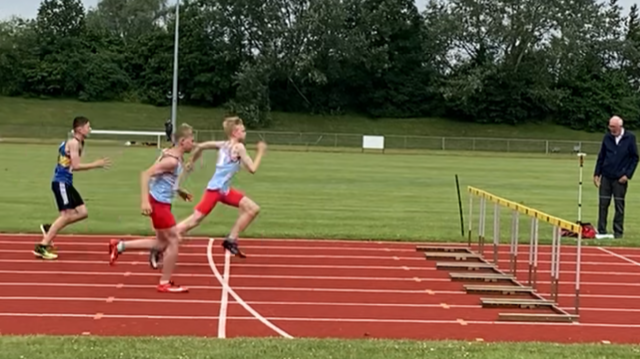 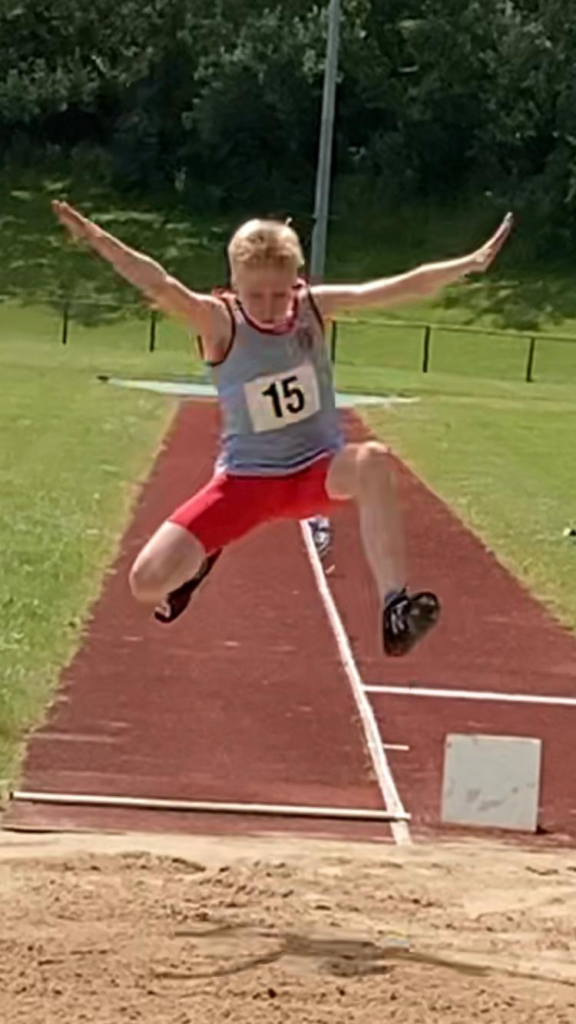 The senior race featured two hundred and eight seven finishers with the race being won by unattached Thomas Hodgson in a time of 41.56.4 with Rossendale’s Stephen Corbishley in 2nd (42.37.5) and Bury’s Andrew Mellor in 3rd place (42.44.4).  Blackburn Harriers Ryan Bradshaw, in training for Hebdon Brook had a good run too coming hom in 9th spot clocking 44.38.3.

In the Junior Race U13, U15, and U17 athletes all ran together over the same distance – fifty three in total – 14 of them being Blackburn Harriers youngsters. The first four places were all taken by Blackburn Harriers also having six out of the first ten, which was a great performance. 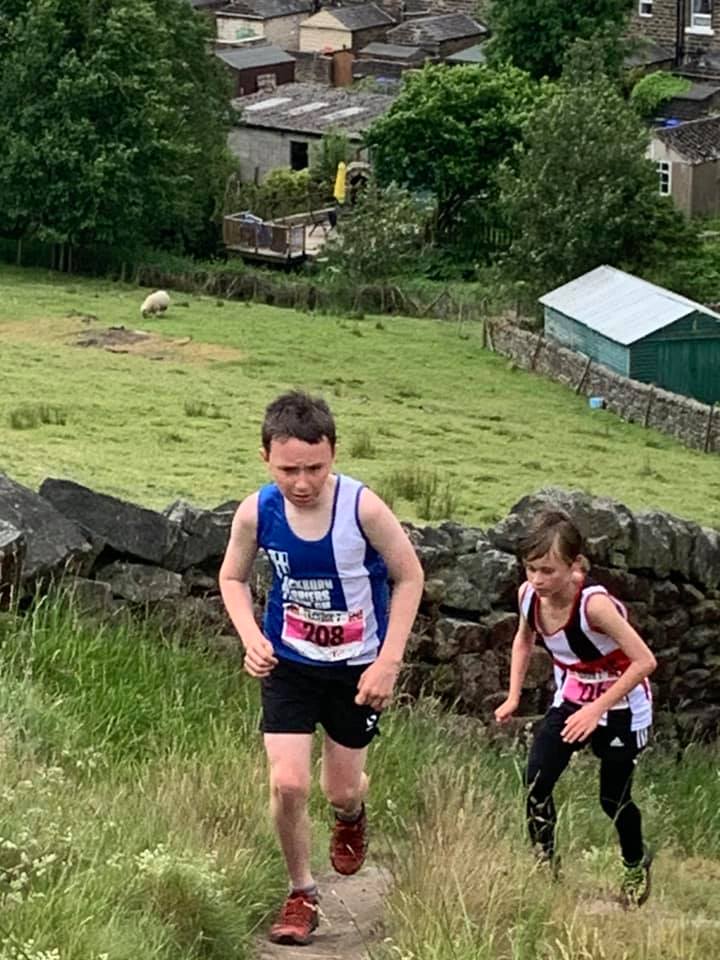 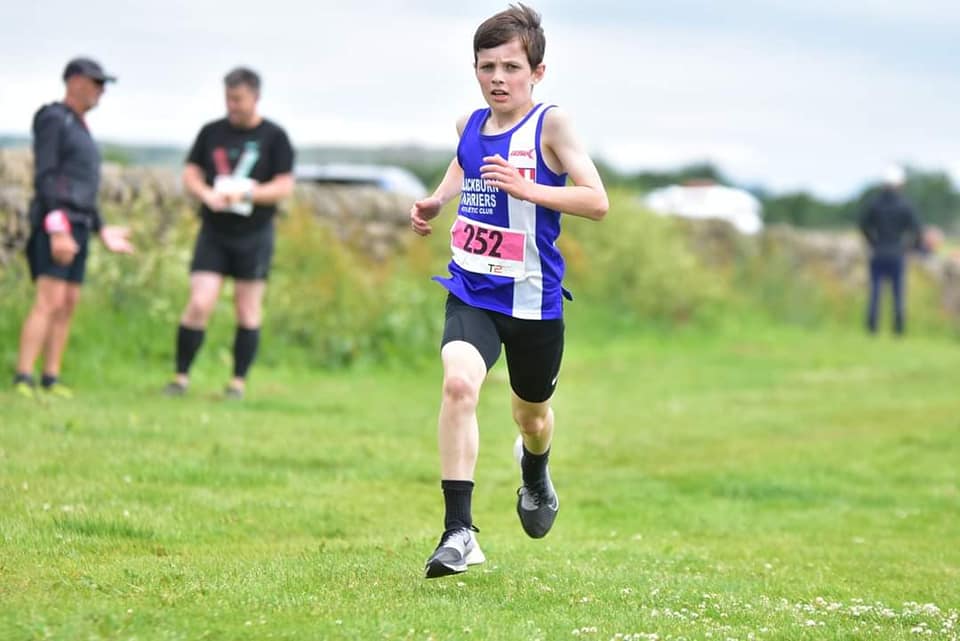 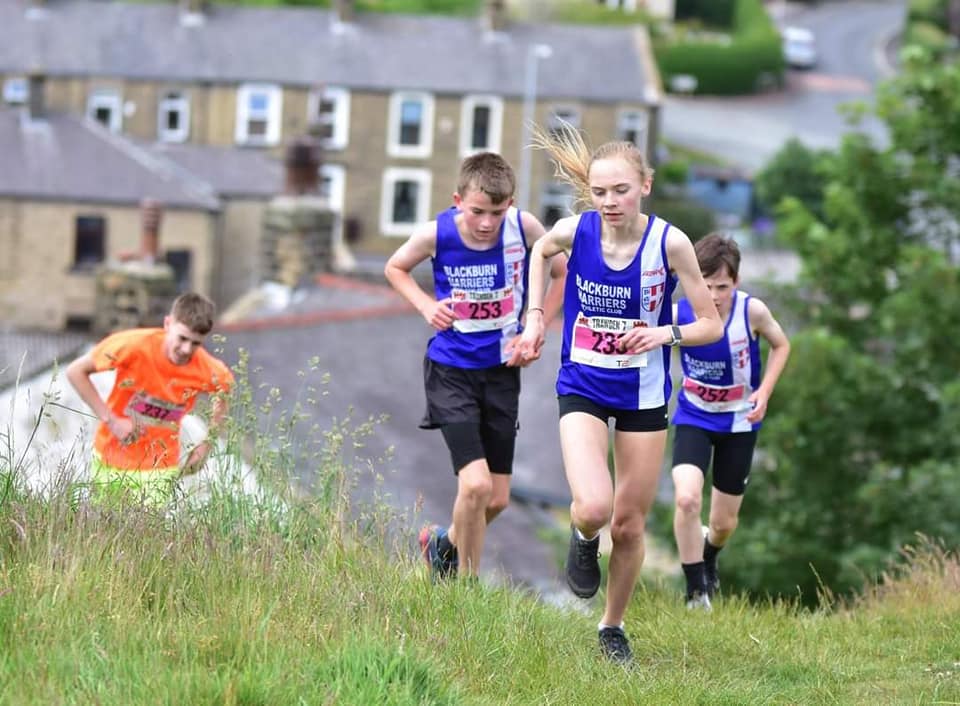 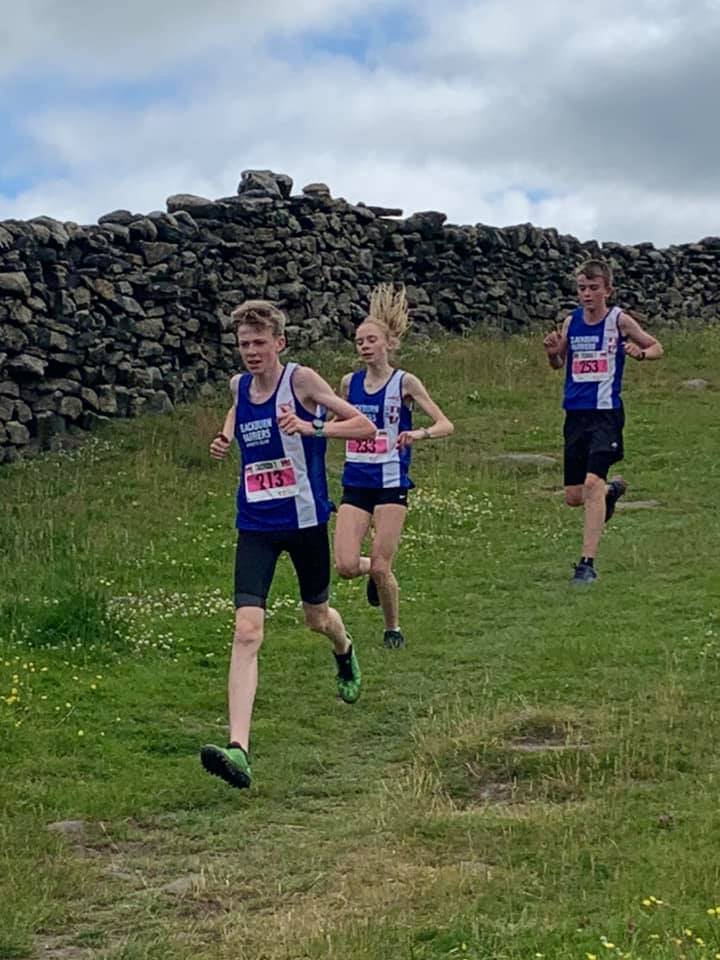 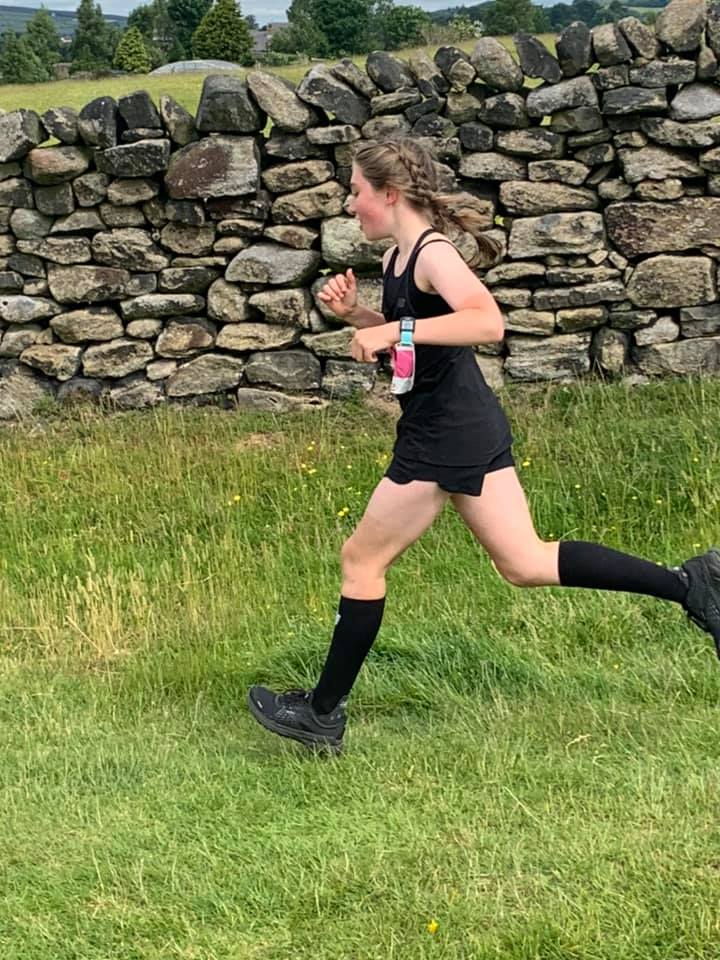