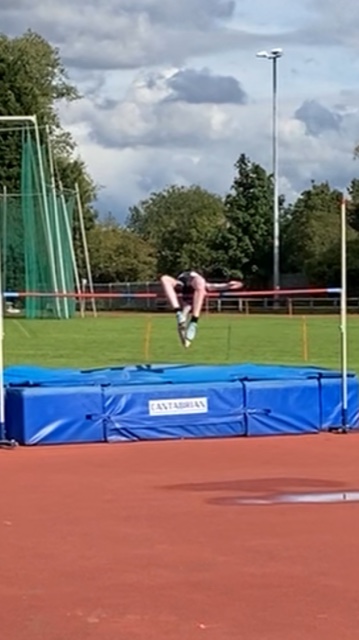 The Trafford Open & Combined Events Meeting took place on Saturday & Sunday – 3rd & 4th October – the first day drenched in rain with Sunday producing the best weather of the weekend. Blackburn Harriers had a few athletes out in individual races as well as in the U13 and U15 Pentathlon.

U15 Ben Stratton got the Harriers off to a good start with a new PB in the 800m, lowering his previous best of 2.16.44 down slightly to 2.16.06 as he placed 3rd in his Heat – the 1st and 2nd in the Race also running new personal bests. Bottom of age U17 Keira Haxton started off this truncated season, clocking 5.27.25 in her first 1500m, then reduced that to 5.17.25 two weeks later and on Saturday added to the Harriers tally of personal bests as she set a new PB for 1500m with her time of 5.14.71, telling the Club afterwards that “I was happy with how the race went, I felt strong strong even though the conditions weren’t great”. First year U17 Abby Stratton was in a mixed 1500m Heat featuring four males and four females. Abby finished 3rd overall in the Heat and first female in a time of 4.48.43.

First year U15 Matthew Smith had a great day at Trafford as he won his first ever Pentahlon competition – featuring High Jump, 75m Hudles, Long Jump, Shot Putt and the 800m – with a points total of 1774, Horwich’s Ryan McCaffery was in 2nd (1642) and Thurrock’s William Watts in 3rd (1602). Matthew’s High Jump was outstanding as he set a new PB of 1.59 an improvement of 4cms. He then set a new PB in the 75m Hurdles, winning his Heat in 14.45 – an improvement of four tenths. On to the Long Jump where he placed 4th with a leap of 4.37m, just 4 cms outside of his personal best and then took 3rd spot in the Shot Putt – an event he has never done before – with a distance of 7.01m. Matthew finished the day with his third win and third new PB of the day in to the 800m, as he headed the race of 9 athletes in a time of 2.22.41 – bettering his previous best by two seconds. 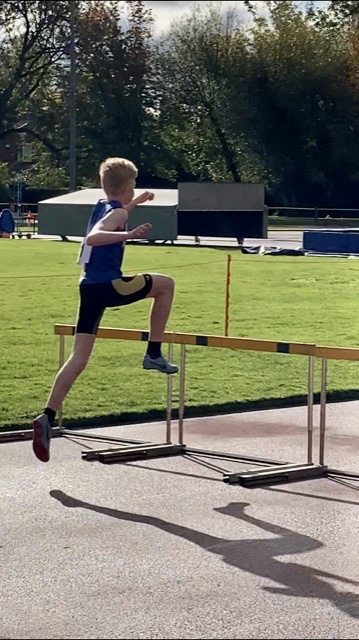 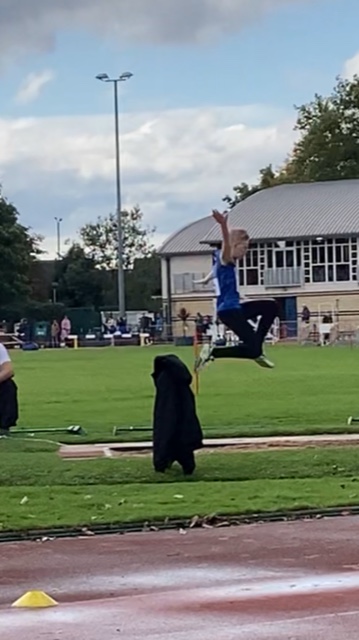 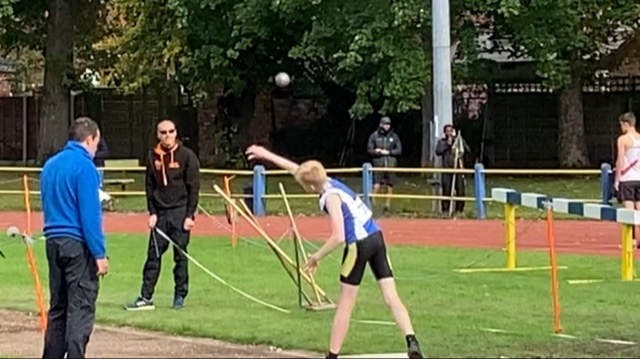 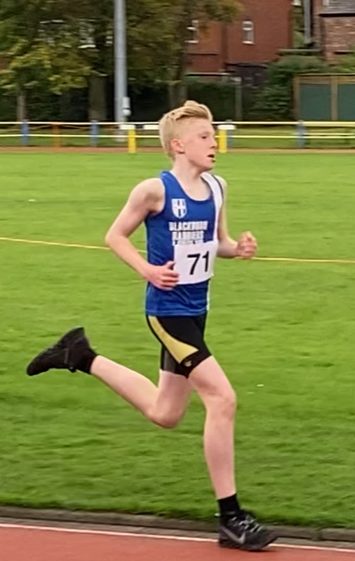 Bottom of age Codie Dewhurst (U17) also entered the Pentathlon for the first time which had five events again – 80m Hurdles, Long Jump, High Jump, Shot Putt and 800m. Codie finished in 8th place with a combined total of 1265 points. It was a great start for Codie as he set a new PB of 1.36m in the High Jump placing 6th, then added a second new PB in the Long Jump as he jumped 3.65m which bettered his previous best by 19cms. In the Shot Putt he was outside his best as he threw a distance of 5.74, before going on to set his third new PB of the day in the 80m Hurdles, clocking 16.67 which was an improvement of three tenths. In his final event of the day, Codie clocked a solid time of 2.31.65 in the 800m. Three new personal bests in his first attempt at the event was good reward. 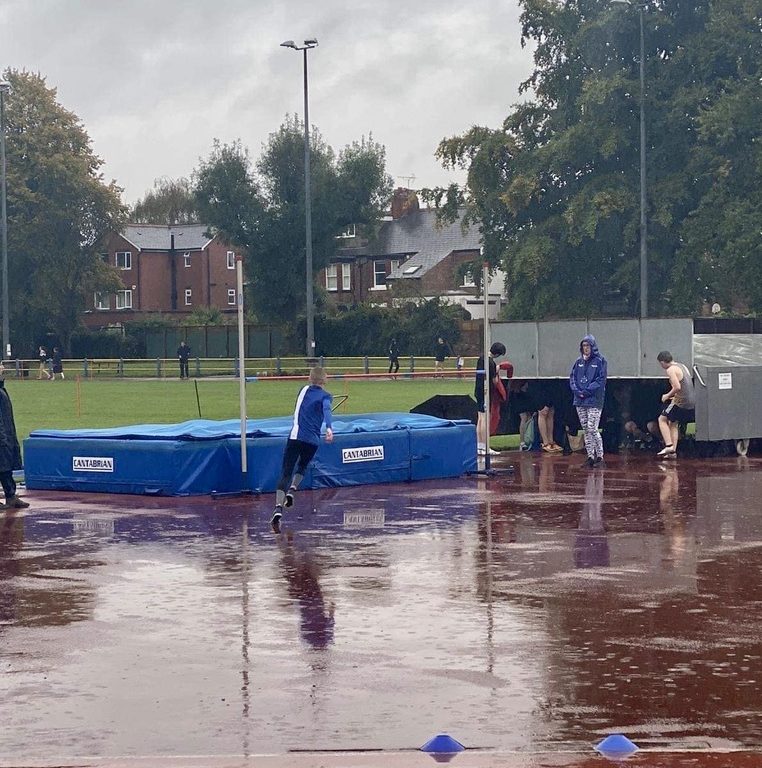 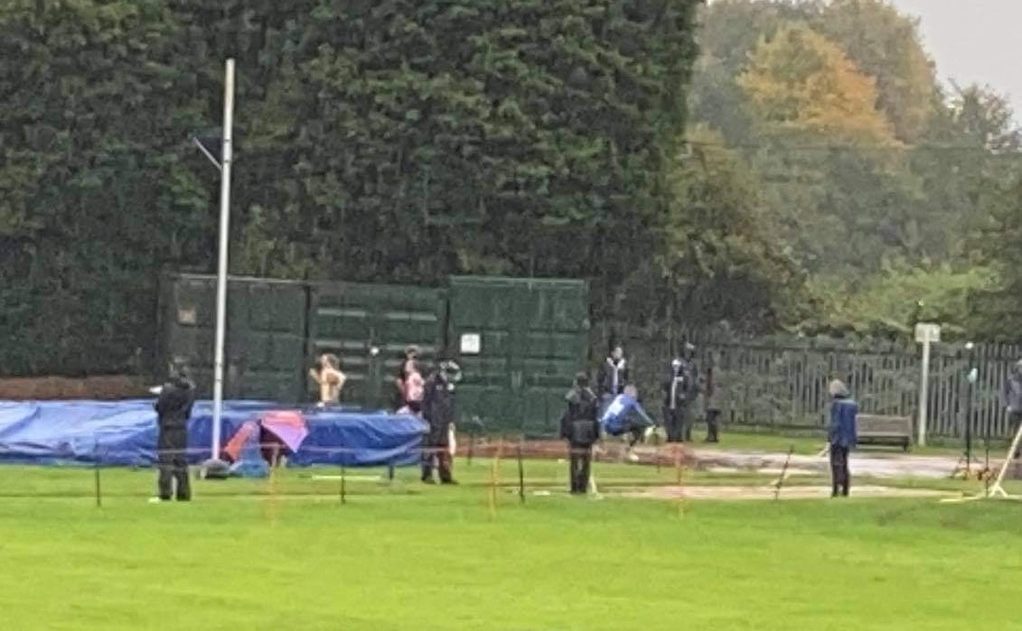 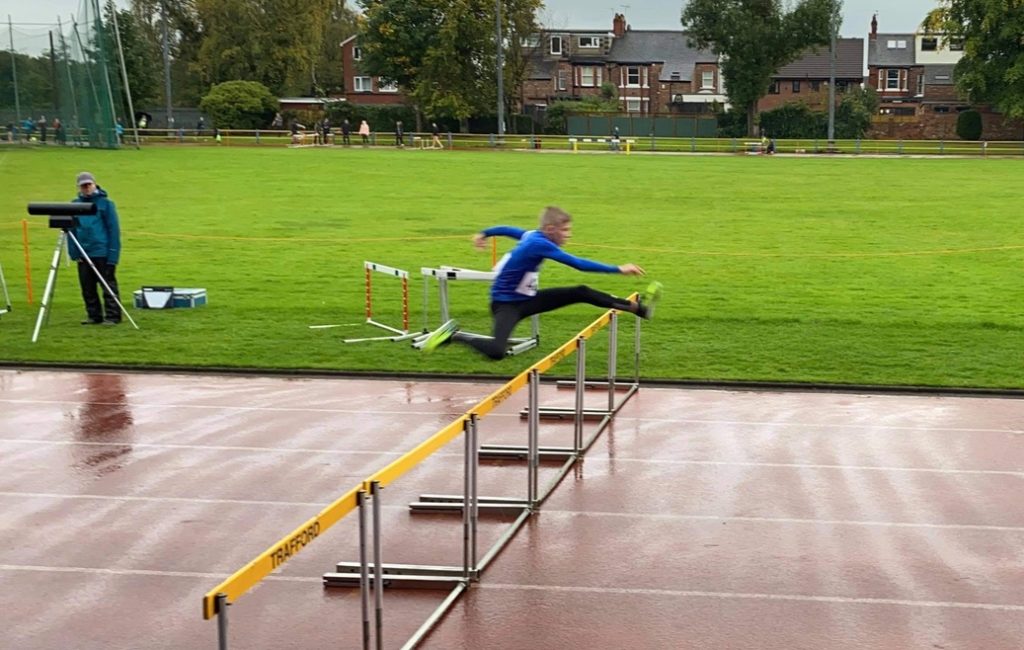 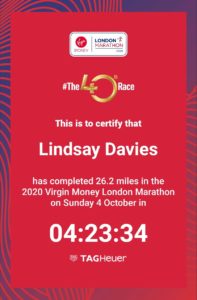 The London Marathon was staged in an unusual way this year, with all those entered, having to run the distance on their own and uploading their distance and time. Blackburn Harriers Lindsay Davies decided to run it and had received the good news that she has been accepted for the 2021 race. Having sorted out a route she completed it in a time of 4hr 23.34 and afterwards, she spoke to the Club about her day commenting “Just completed the marathon in 4:23:34 previous time 4:27:54, I didn’t really set myself a flat course, heading up Park Lee road at the beginning was a very tough start. Chris and Hannah followed me round the course with water which was great. At mile 18 I started to really tire and got a huge blister on my foot which was on the same leg as my injury so that really slowed me down.The run was very tough mentally doing it solo, I wanted to give up so many times but just concentrated on putting one foot in front of the other and just kept going the best I could. Finished my last few miles down Witton with Andrew Knowles, George and Susan Woodburn, Chris and Hannah and Barbara Gillies all cheering me on. Would like to get rid of this injury and start to enjoy running again before I start training again next summer for the London Marathon in October”. 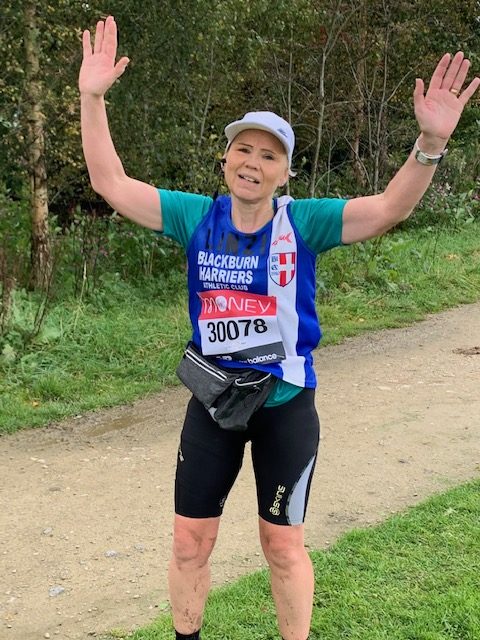 At the finish in Witton Park 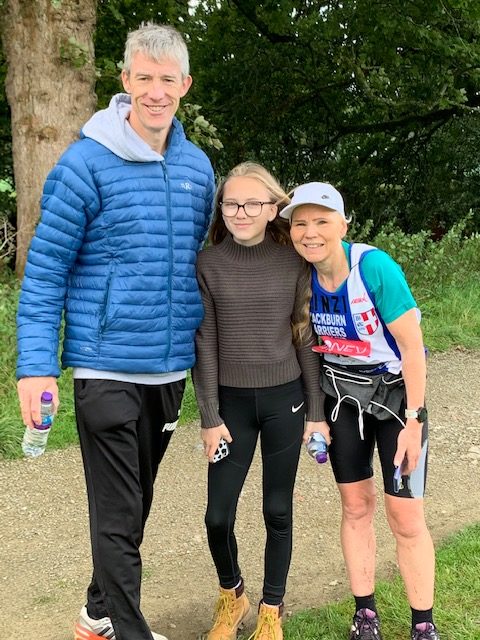 Support Team Chris & Hannah with Lindsay at the finish