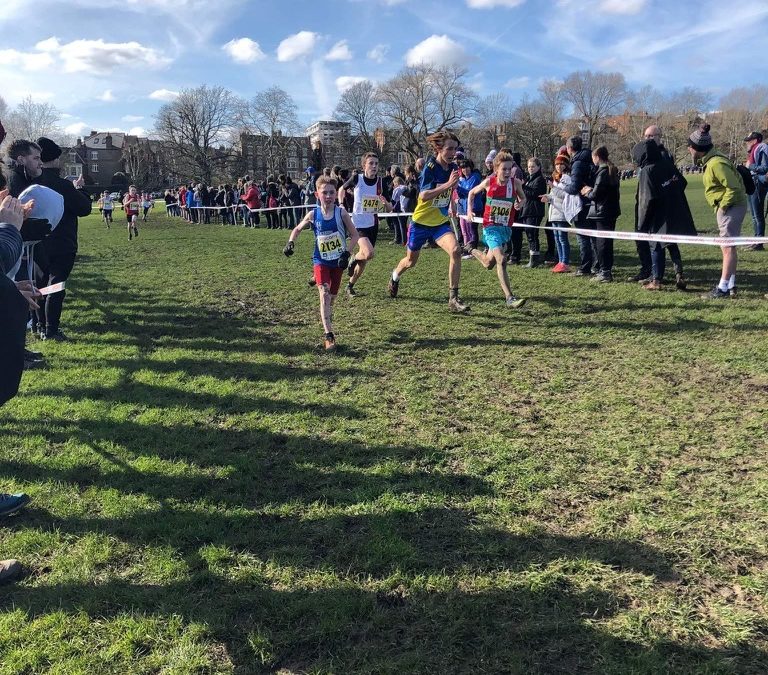 Blue skies, sunshine and 10 degrees greeted the five thousand, five hundred and eighty six athletes who contested this years National Cross Country Championships on the iconic Parliament Hills course in London. Blackburn Harriers athletes had a very good day and pulled out some really good performances among the age groups. The junior athletes out on the day for the Club were running in the first of three top championship races – the Nationals being followed by the Inter-Counties (at Loughborough) and English Schools Cross Country Championships (Kent). A fine day for cross country racing and still with lots of mud!

The first race of the day had 274 athletes lined up in the U17 Women’s race (RESULTS) and among them – Isabel Holt and Abigail Stratton for the Harriers, the race being won by the current Northern Champion Jess Bailey (19.20). Isabel and Abigail who had both been inside the top 15 at the Northern Cross Country Championships at Pontefract in January after placing 2nd and 3rd at the Lancashire Championships, had impressive runs with Isabel coming home in 28th spot (21.13) and Abigail in 32nd (21.21). With the race over, both athletes shared their thoughts on the day with Isabel saying “I’m really happy with my race and result. It was an amazing experience! Well done to all that ran!” with Abigail telling us that she “Set off very strong and felt good until I fell at a mile 1/2 and couldn’t get back into it probably overall happy with the results and a great experience and practice ahead of the next two races.” 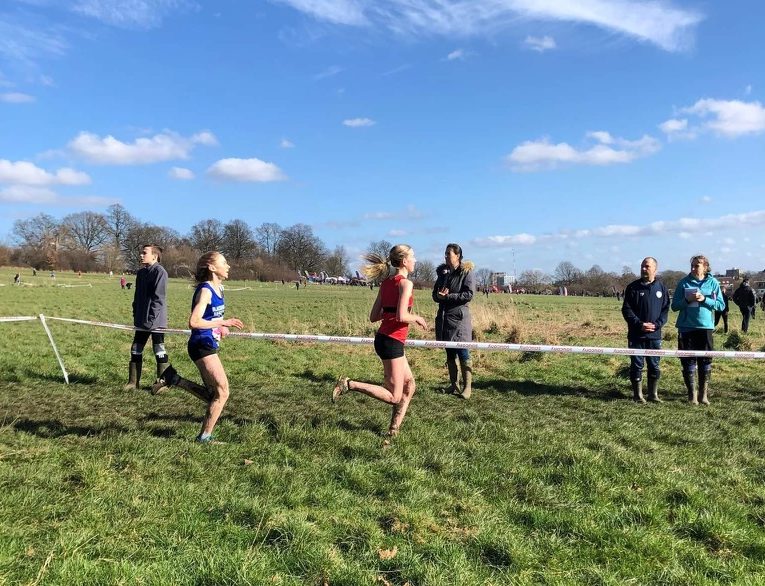 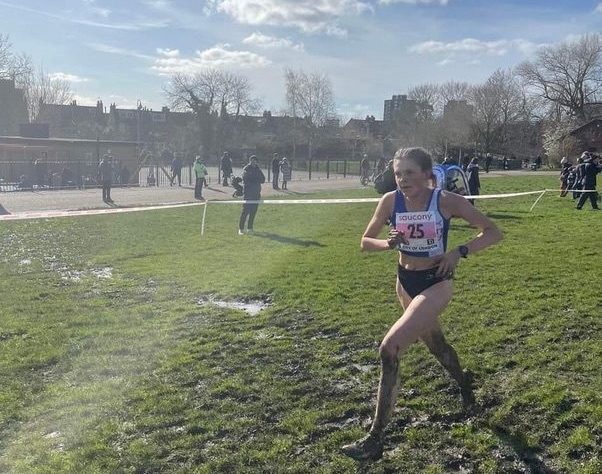 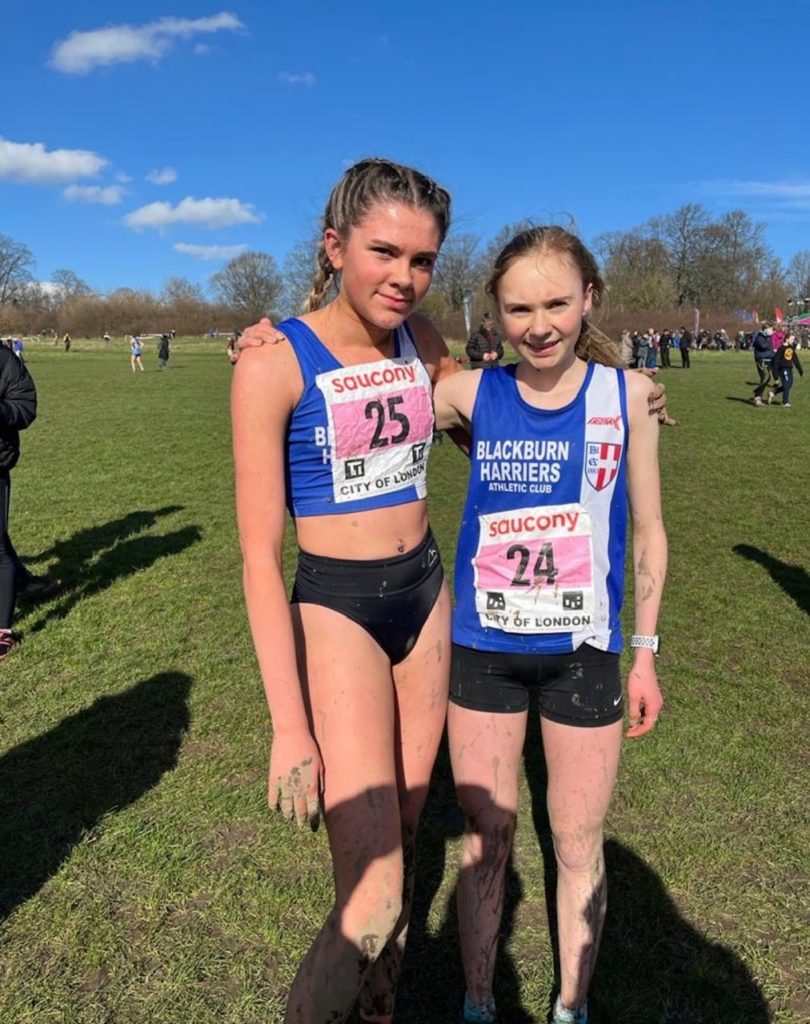 Four Blackburn Harriers lined up among the four hundred and twelve athletes in the U15 Boys race (RESULTS) – the next race on the timetable resulting in a fine win by Vale Royal’s Robert Price in 14.15. First over the finishing line for the Club was Daniel Smith who took 68th spot in a time of 16.11. Oliver Gill was next home in a time of 17.42 in 219th followed by Ben Stratton just one second behind in 227th place (17.43) and George Ramsden running a time of 19.19 in 346th position. It is amazing to watch these races and the closeness of the finishes as athletes pile across the line, trying to take one more position. For example, just six seconds seperated 22 places between 207 and 229. 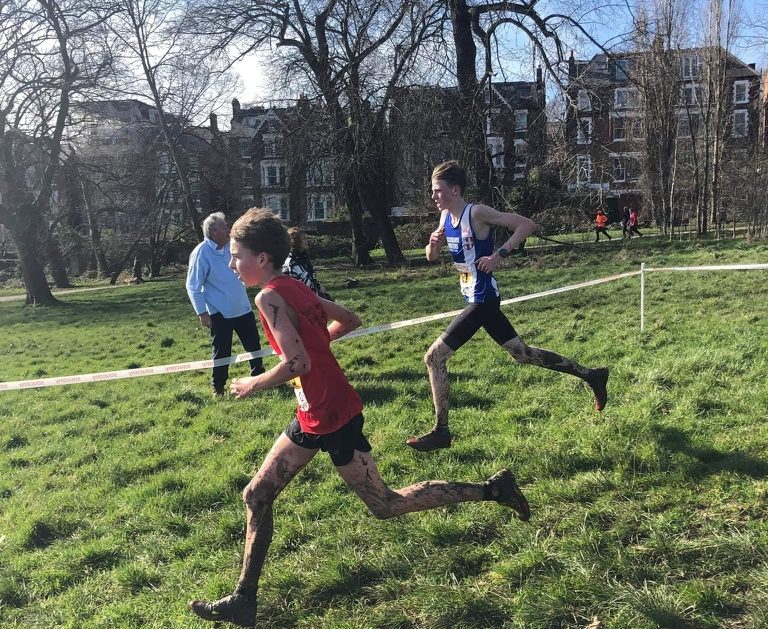 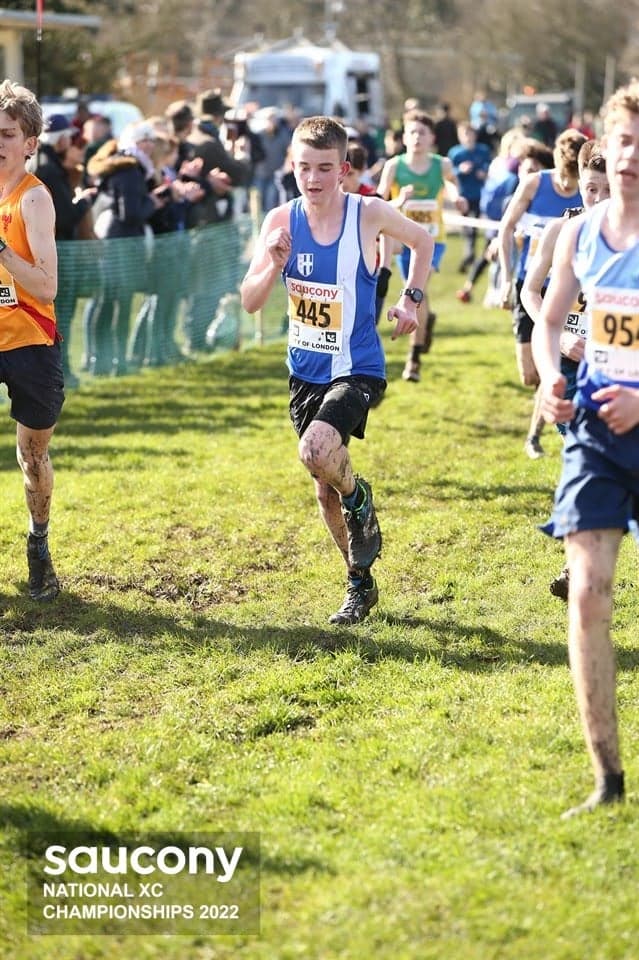 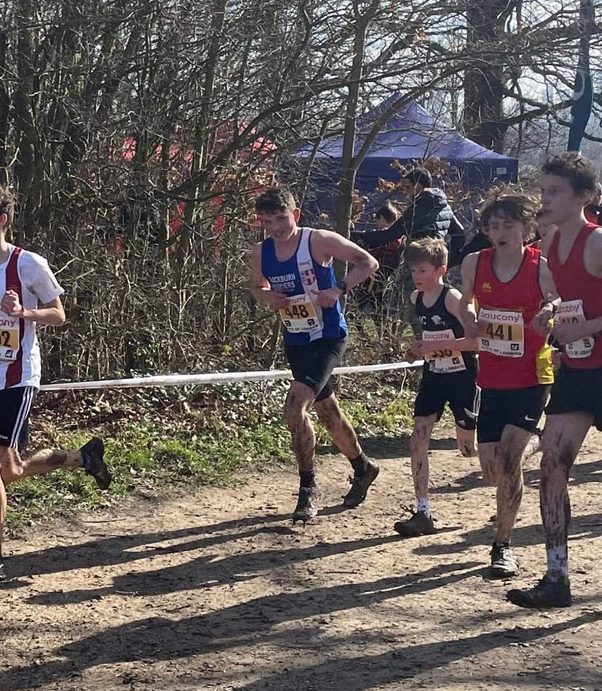 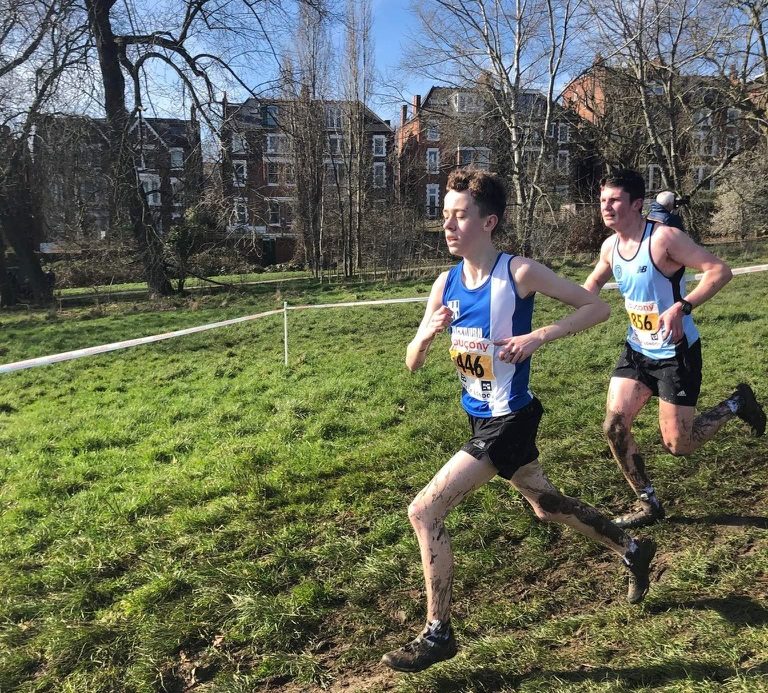 David Holman was next up in the U17 Men’s Race – (RESULTS) – and another one of the Harriers who will be running in the Nationals, Inter-Counties and English Schools over these next weeks. He had won Silver at the Lancashire Championships in early January and followed that up at the Northerns placing 12th at Pontefract. Three hundred and ninety three athletes on the start line for this race won by Exeter Harrier’s Sam Mills by 19 seconds in a time of 21.14. David. finished up in 33rd spot (23.12) holding off Poole AC’s Mark Ruby and Tonbridge AC’s Edward Coutts who were given the same time. After the race David spoke to the Club about his day, commenting that it was “My first ever nationals race and it didn’t disappoint. Had a fast start and a strong first lap but then legs got really heavy. Absolutely buzzing with 33rd. The pink shorts definitely helped.” 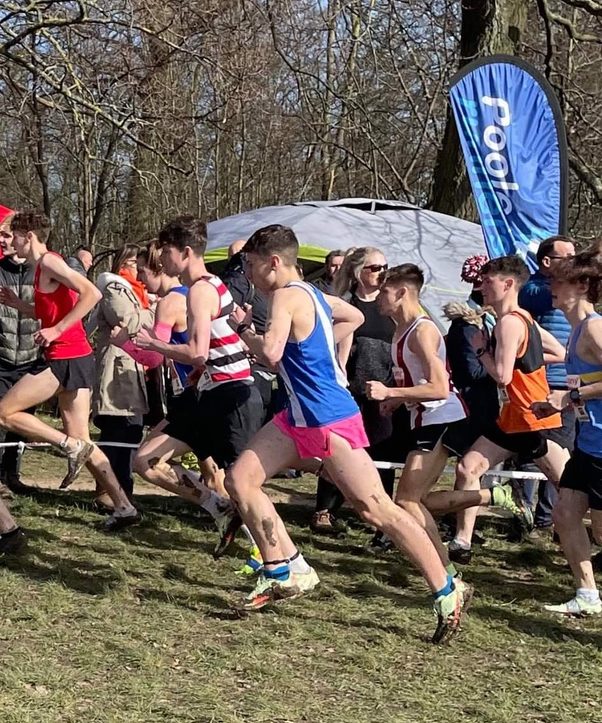 Next race was for the U13 Boys – (RESULTS) – featuring three hundred and four athletes which was won by Windsor Slough & Eton’s Jake Meyburgh in 11.06. Sam Aspey who had just won the local Red Rose League Individual title, the Lancashire County Cross Country title and placed 10th in the Northern Cross Country Championships, was really looking forward to this day as the competition level stepped up yet again. Sam didn’t disappoint with a top 20 finish crossing the finishing line in 19th place with a time of 12.27 – just one second separating 16th to 19th places. Sam spoke to the Club about the day and his race “After a bad start and difficult conditions, I felt I did well to recover and hit my target of a top 20 place. I really enjoyed the experience and the day with the rest of the Blackburn Harriers team, especially the karaoke on the bus!!” 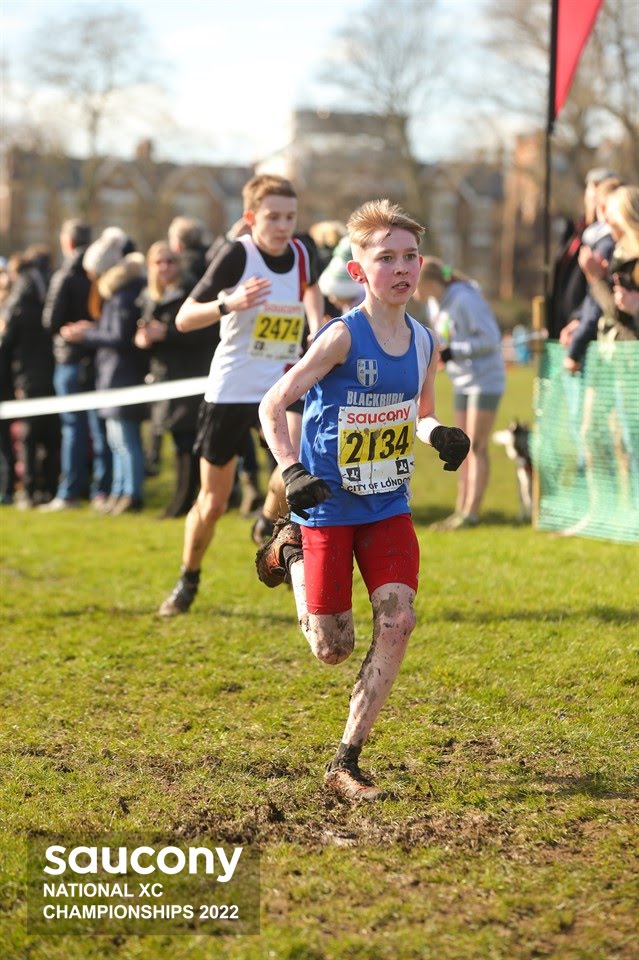 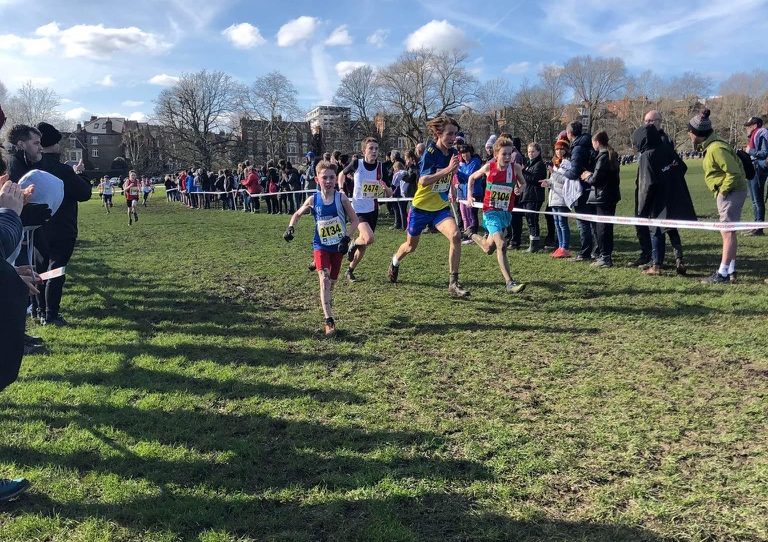 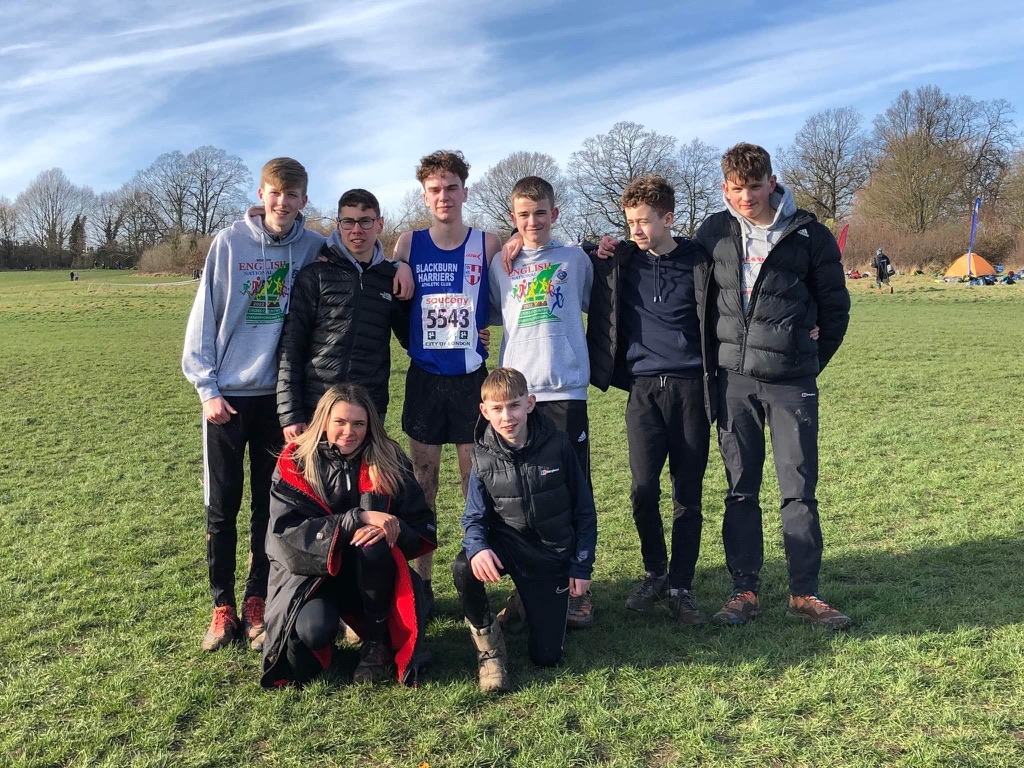 Matt Ramsden had gone in to the Nationals Junior Men’s Race – (RESULTS) – on the back of a top ten placing in the Northern’s – finishing 7th – in a race won by Leeds athlete Joshua Dickinson who placed 6th in this race today with 33.41. The race was won by Aldershot’s Will Barnicoat (32.51) with Matt working his way through the field to come home in a fine 22nd position (34.55) and commenting to the Harriers afterwards “I am over the moon with my result today! The field of runners was of such a high level and I’m chuffed to be in there! Well done to all that ran.” 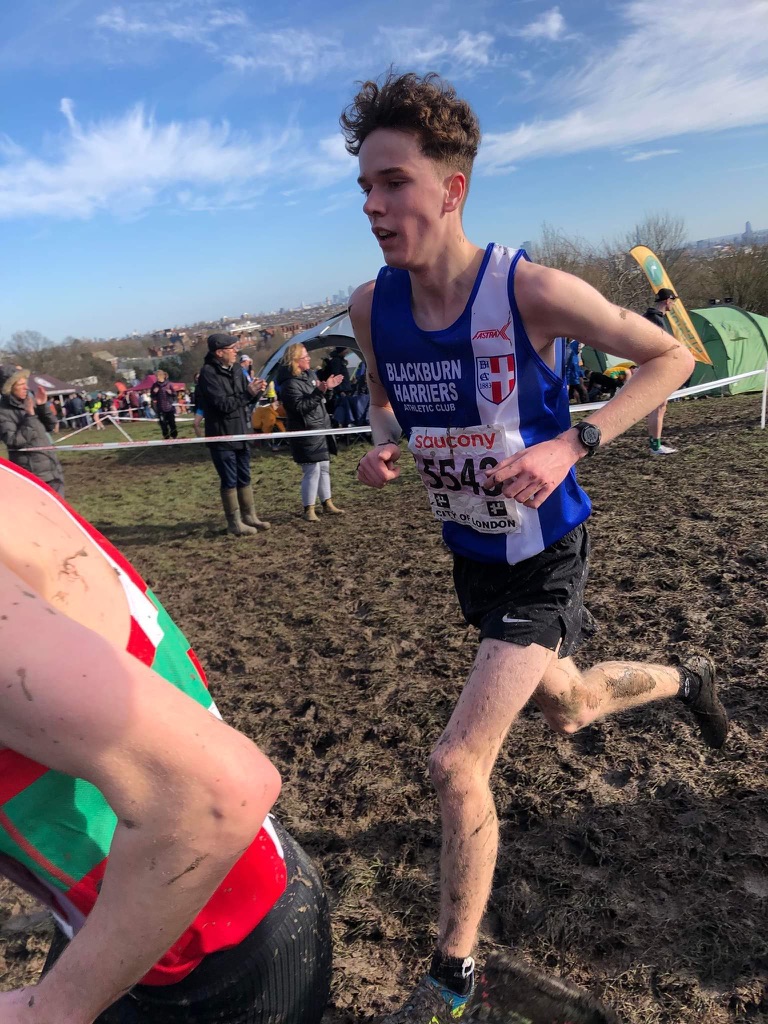 Final race of the day was the senior men’s which had over two thousand athletes, making for one of the great sights in the athletics calendar as they all charge towards the hill. (RESULTS). Mahamed Mahamed was the impressive gun to tape winner in 40.52 with his Club Southampton easily taking the team title, having three athletes home in the first ten places. The Harriers had six athletes out in the race – Ben Fish, Luke Betts, Tim Raynes, Joe Gebbie, John Sutton and Danny Teare. What can you say about Ben Fish? His consistency of performance over many years is exemplary as is his commitment to the Club. Having raced just three times so far this year, he started off with a 3rd place in the Lancashire Cross Country Championships, finished 15th in the Northern’s and then won the Winter Warmer 10k. Today he was our first finisher home in 92nd place running 46.07 and after he had finished, he told us that it was a “Great event as always at Parliament Hill. I think the lack of club start pens hindered us all as we started further back from the front than we would have liked. I was happy with my run and felt I was working through well, but I was too far back to get near the top 50. Hopefully that’s something I can achieve next year.” 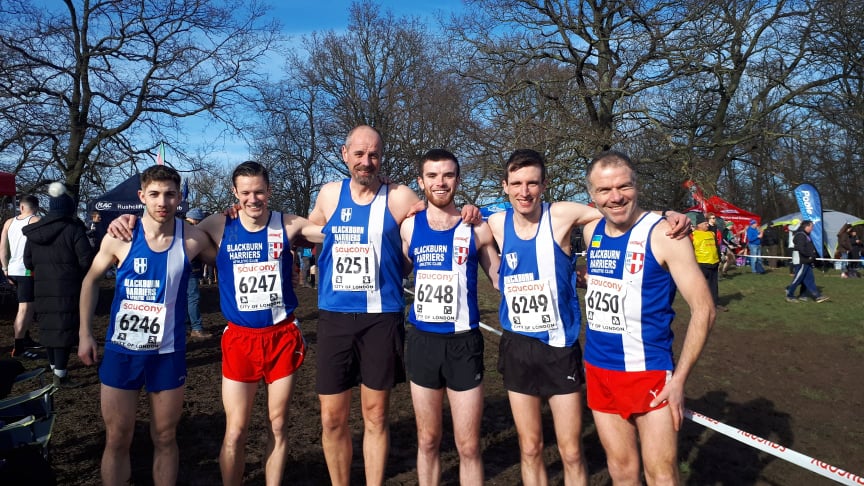 Luke Betts who tongue in cheek told us “Wish i stayed at home” was the next Harrier home in 188th spot running 47.58 followed by Tim Raynes who had finished 21st in the Northerns at the end of January – placing 217th with a time of 48.26 – after which, he told us “Always a brilliant event at the National Cross, but it was a run to forget for me. I got a terrible start, and then struggled to move up in the very muddy sections. Great run from Ben (particularly given his start) and fantastic to see some top runs from the juniors.“

Joe Gebbie had only been able to race once this year so far, at the BUCS Cross Country Championships on February 5th where he finished 141st out of a 500+ strong field. Today Joe came home in 471st spot running 52.20 and told the Harriers afterwards that it was his “First time in the Senior Men’s and it was a baptism of fire. Felt a big step up from junior men’s in terms of distance but mainly the insane volume of runners. The race was a real slog but I’m glad to have stuck it out – the atmosphere and support was second to none. Great to have got 6 out in the men’s, and congratulations to some cracking junior performances.”

Really good to see John Sutton back in a Harriers vest and running his first race since June 2018. What a race to make your return to competition in!! With a time of 67.50, John finished in 1530th spot and his own amusing and self-deprecating way, John summed up the day “Nice to be back in the blue vest, which felt a bit tighter than last time I put it on so much work to be done! This was my first race for knocking on three years and straight in to the lion’s den. I’m not even that keen on cross country, but for me, this is the biggest, best and most proper race of any description in the country and especially when it comes around at Parliament Hill. Any athletes who want to find out exactly how good, or how exceedingly average they are, then this race is a must do. Being fit enough to get there and trudge round was a triumph for me, I got stuck in and will try not to get depressed about my stats. Congratulations to the Fish for a top 100 in that lot though and the other Blackburn lads who put themselves in the mix. When you think about it, Ben Fish has to be one of the finest amateur runners in the country. Of the very few that have been ha bit quicker than him, even fewer of them come close to matching Ben’s tremendous level of consistency over two decades. It’s incredible.”

Danny Teare was running at Parliament Hill for the first time and clearly enjoyed the day as he ran a time of 78.28 (1939th) which was reflected in what he told the Club after the race had ended “It was a total privilege to be able to take part in such a massive event. My first Parliament Hill champs and it lived up to expectations. Pleased with my race, kept a bit in the tank for the last lap. Some great performances from the Harriers across the age groups. Looking forward to a return in 3 years time!“

Held over the weekend of February 26th and 27th, these Championhips were acting as qualifying events for the World Indoor Championships. Blackburn Harriers Dominic Walton went in the 800m and was drawn in Heat 2 alongside Elliot Giles and David Locke. Finding himself leading the race he qualified for the Final in a new Indoor PB time of 1.50.98 in 2nd spot behind Elliot Giles (1.50.60) with David Locke in 3rd (1.51.10). In the Final he clocked yet another new PB of 1.49.82.

Speaking to the Harriers almost as soon as he crossed the finishing line, Dominic commented on the Final “I wanted more from the race but despite finishing at the back of a really strong field, I’m really happy with the time I ran 1:49.82 for an indoor race and off my current fitness. This season has been about protecting my joints and improving my strength, so I’ve missed lots of speed/endurance work which will hopefully put me in a really good position come summer time which is what this entire winter period has been hearing me up for. Thanks to everyone at Blackburn for your kind messages.“ 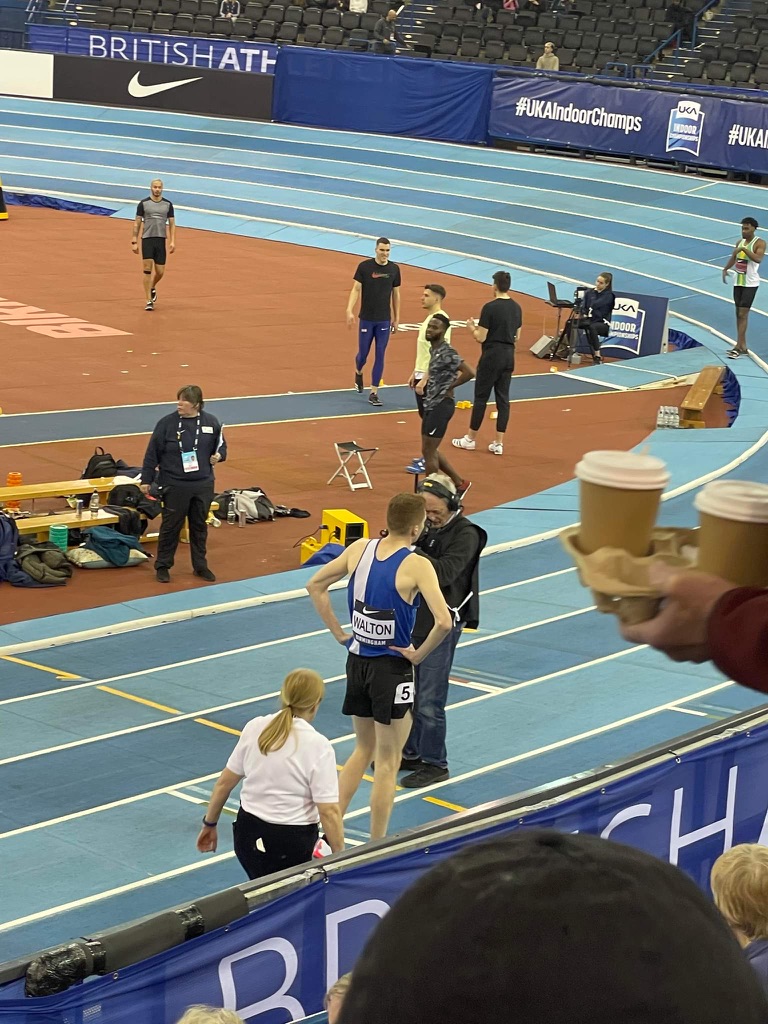 Nick Gaskell was making his debut for Blackburn Harriers today at this local Race which featured just over 400 runners – the Race being won by Salford’s Harry Wakefield in 29.59, a minute in front of 2nd placed Neil Pendlebury (31.01); And it was a very good debut as Nick took a top ten spot – 10th in a time of 33.14 – and also won the V50 1st Prize in front of Horwich athlete Julian Goudge – (34.07 in 14th).

Just forty three runners in this local 10k Race won by Callum Townsend in 32.44 with Ben Walmsley in 2nd (33.14) and Stephen Hall in 3rd (34.23). Blackburn Harriers Jonny Murphy was running his first race – outside of his remarkable adventures over fells and mountains – since October 2020. Jonny went into the Race with a 10k personal best of 35.02 and remarkably, after such a long time out of road racing, he slipped right back into it with a 35.21 clocking in 4th place.