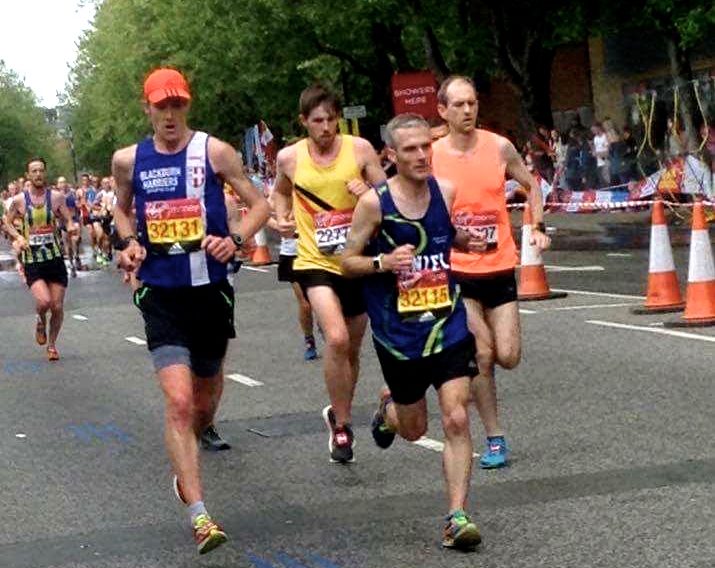 Chris Davies ran his first Marathon in April 2014 in Manchester which was unfortunately measured short. In his debut he posted a time of 3.02.31 which was a great effort in his first ever attempt at the distance. Knowing that he didn’t run the race the way he had intended, he set out to bring the time down and run faster. In 2015 he cut a whopping 13 minutes off his previous time to record 2hr 49.41. One year later in 2016 and again in London he came down ever further to set another new PB of 2hr.46.55. His training for London 2017 gave him the belief that he could knock another chunk off and he duly obliged running a new personal best of 2hr 41.22. A rather happy athlete told the Club “This is probably the best shape I’ve been in since starting running 4 1/2 years ago. I was always feeling confident that I could hit the time I wanted I just had to go and do it. I felt good in my warm up and started the race well. My first mile was a 6:06 which was bang on target and I felt comfortable with that all the way up to the 20 mile mark. I felt OK at this point and pulled out 3 more good miles but the last 3 were the hardest. Mile 24 my pace dipped a little, I managed to rally again for mile 25 but with that big last effort struggled on the home straight. Dug it out though and come through the line at 2:41:21. Really pleased with the result and I gave everything on the day. The support on the day was great from people out there on the course and I would like to say thanks to everyone for all their great support during training for this event and the praise they gave after it. Very much appreciated and it’s great that I know I’m surrounded by a great bunch of people within Blackburn Harriers and out of it.”

Conrad Mckee followed up his 2016 London Marathon time of 2hr. 50.34 with another 2hr 50.19 clocking in 2017 which was a great result for him as he has had to contend with a long period of injuries – Conrad told us afterwards that his “Time was slightly faster. Only slight. 2.50.19 but it was a better more controlled run than the year before. I had hoped to try and dip under 2.45 but I tore some ligaments in my foot 11 weeks ago and didn’t even know if I was going to go to London. Gaz at GW got me fit again and Ben Fish wrote me an 8 week plan to get to the start line. Everything went well and it all clicked in to place on the day. My splits were very consistent on the day with only 4 seconds difference in every 5k from start to finish. I think I will have a stab at Chester in October”.

Sean Proctor clocked a time of 3hr 31.58 which wasn’t what he was expecting, but as all marathon runners know, the distance doesn’t always work out for you on the day. Sean told the Club “I was having a good run up to mile 16 when the hamstring injury I picked up the other week flared up again. Just glad I could limp to finish it in 3:31:58. I will be back training as soon as possible ready for Chester in October“. 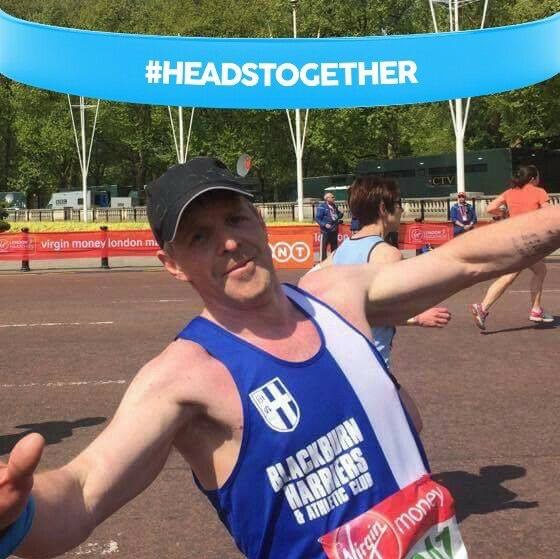 Claire Bridge is another Blackburn Harrier who started her Marathon running career in 2014 at the Brathay Windermere Race where she ran a time of 5hr 30.45. In the same year she ran the Chester Marathon – just six months after her first and knocked 53 minutes off her debut time when she ran 4hr 37.04. On to the year 2015 and she chopped a further six minutes off her time with 4hr 31.05 at Chester again and then in 2016 cut another eight minutes off in the Manchester Marathon when she achieved a time of 4hr 23. 08.. At this years Blackpool Marathon, Claire went even further taking another 14 minutes off her previous best to set a new PB of 4hr 09.09. Claire has now reduced her Marathon PB in just over three years by one hour and twenty one minutes and there was little doubt that she was happy about her latest run telling the Club that she was “Delighted to run a big PB today at the Blackpool marathon. It was tough conditions, too hot and quite breezy. I knocked nearly 15 minutes off my Marathon PB. I was 2 minutes inside my half marathon best. Roll on Chester!!!“ 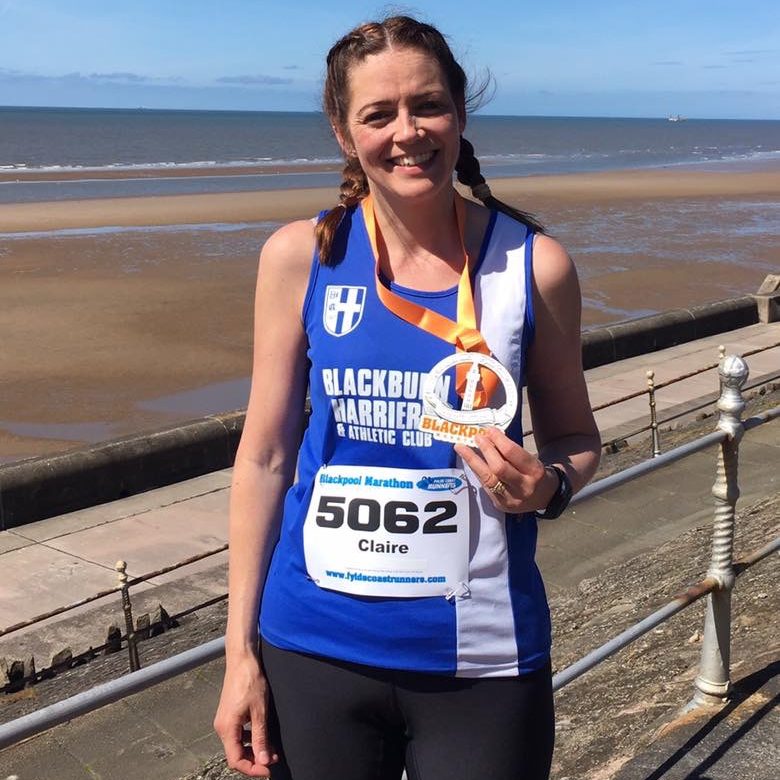 Joe Monk added another win to his racing CV when he won the Blackpool 10k in a time of 33.15, nearly three minutes in front of the second placed runner and commented after the Race that he was “pleased to win today, it was windy going out up to 6km and had some twists and turns to contend with so knew a really quick time wasn’t feasible, nevertheless pleased to win and look forward to racing the 3k at Trafford on Tuesday”. 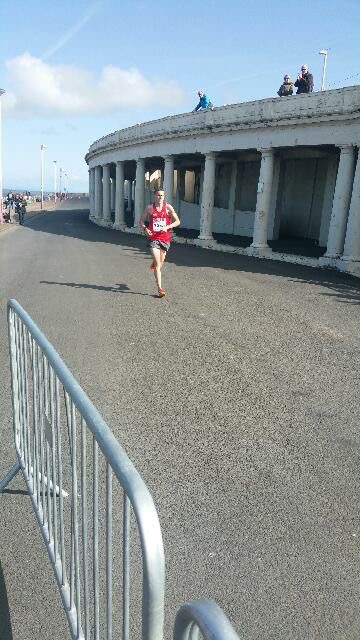 Over in Bolton, Pauline Powell made a welcome return to racing, this being her first 10k Race since 2009 and what a return it was. In a field featuring 675 finishers, Pauline placed 9th overall, won the Women’s Race and broke the Course Record. Understandably she was delighted and told the Club “It felt great to be back racing and was happy to break the course record on such a tough course!” Victoria Mousley also had a very good run for the Harriers coming home in 23rd spot in a time of 39.58 which was just twelve seconds outside her personal best and showing what a good run she had, given the course terrain and the wind. Vicci spoke to the Club after the Race and told us “If you manage a sub 40 more than once then it can’t be a fluke. Problem is now I have to make a new target. Perfect day today for a run back in my hometown of Bolton, even had my parents coming out to watch and some friends. The Bolton 10k is a great course with a great variety of terrain, hills, steps, switchbacks etc…..quite a tough one and not one to do if you are looking for a pb. Lovely to see Brian and Michelle at the start and to hear encouragement from them and many others on the way round. All I wanted today was a sub 40 wasn’t too concerned about position. Happy to come away with 4th lady and we’ll done to Blackburn Harriers runner Pauline Powell with first place and course record too”. V55 Paul Clarke was running his third 10k of the year so far at Bolton where he placed 139th overall in a time of 47.25. 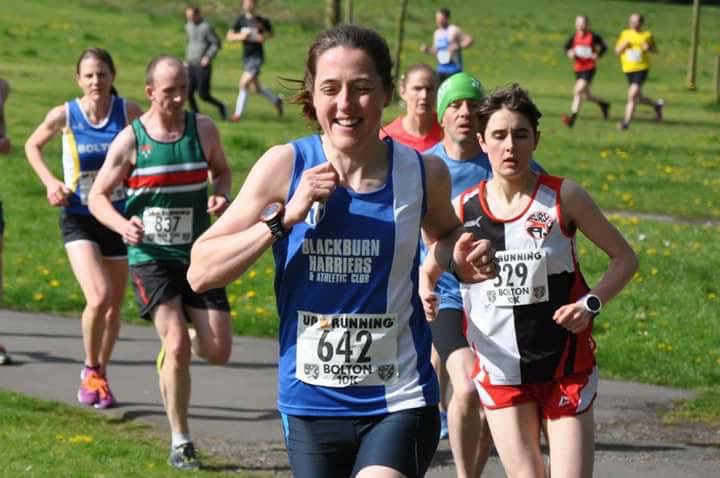 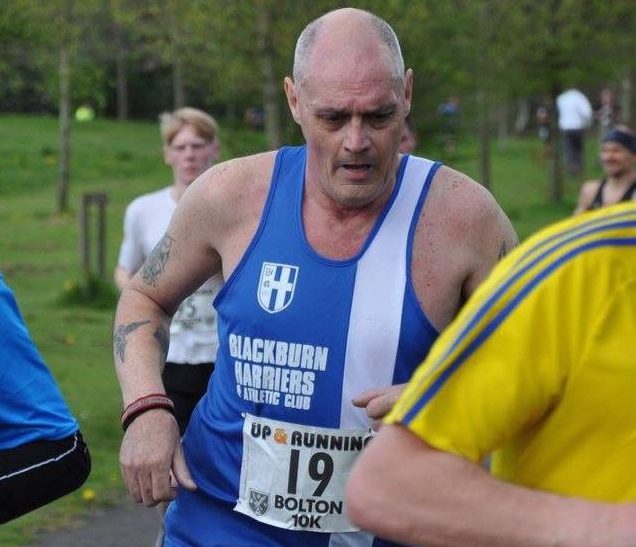