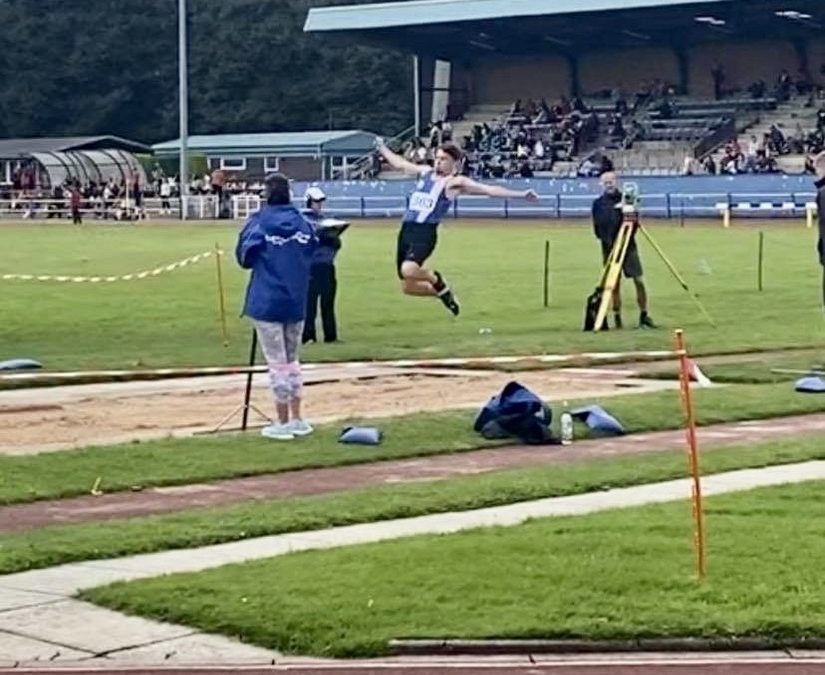 You expect athletes – particularly Juniors – to improve as they move up through the age groups, however, what has to be taken into account for all of our athletes and of course, those from other Clubs too, is that 2020 has been a truncated year from the point of view of their training and competition, the impact of which is difficult to assess in advance. For the most part, our athletes haven’t had organised competition for the best part of a year, nor have they been in structured training sessions within their training groups for something in the region of six months, with actual face to face contact with their Coaches at a premium, with most of it being activated ‘virtually’ – so it is to the credit of all of our athletes who competed at Trafford today, that they have been able to maintain their basic fitness and commitment to their training as individuals and have come out and competed so very well. This also goes for all athletes who were out and gving it their best from all of the other Clubs.

The latest fixture in the return to Track & Field Competition in the Trafford Series took place on Saturday August 22nd featuring Throws, Jumps and Track races from 300m through to 3000m. Quite a number of Blackburn Harriers managed to gain entry and produced some very good performances on the day. Anna Peers, our Senior Women’s T&F Team Captain contested the Javelin, only her second competition of 2020 and her first with a Javelin since September 2019 – empahsising once again, the particular impact that Covid 19 has had on athletes who compete in Field Events. On the day, Anna placed 2nd with a distance of 37.97 and told the Harriers that it “Was nice to finally get back to throwing javelin having not thrown since before lockdown and the rain held off. All things considered the performance was good. Great to see other Blackburn athletes out again and a brilliant PB from Millie in her new age group”. Millie Coy stepped up an age category and is in her first year as an U20. Her last competition with the Javelin was in August 2019 a full year ago, but she didn’t display any ring rust as she won her event with a throw of 36.43m – recording a new PB and a new Blackburn Harriers Club Record. Following the competition, Millie told us that she “went to the event today no knowing what to expect for my performance and came away with a pb and a club record and i am thrilled with my performance”. 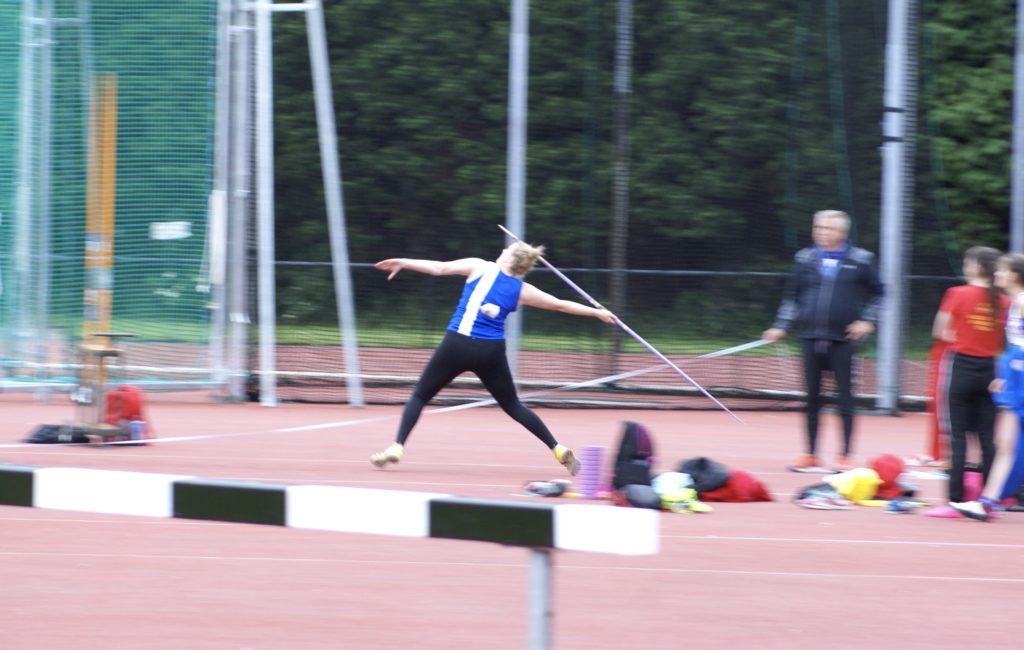 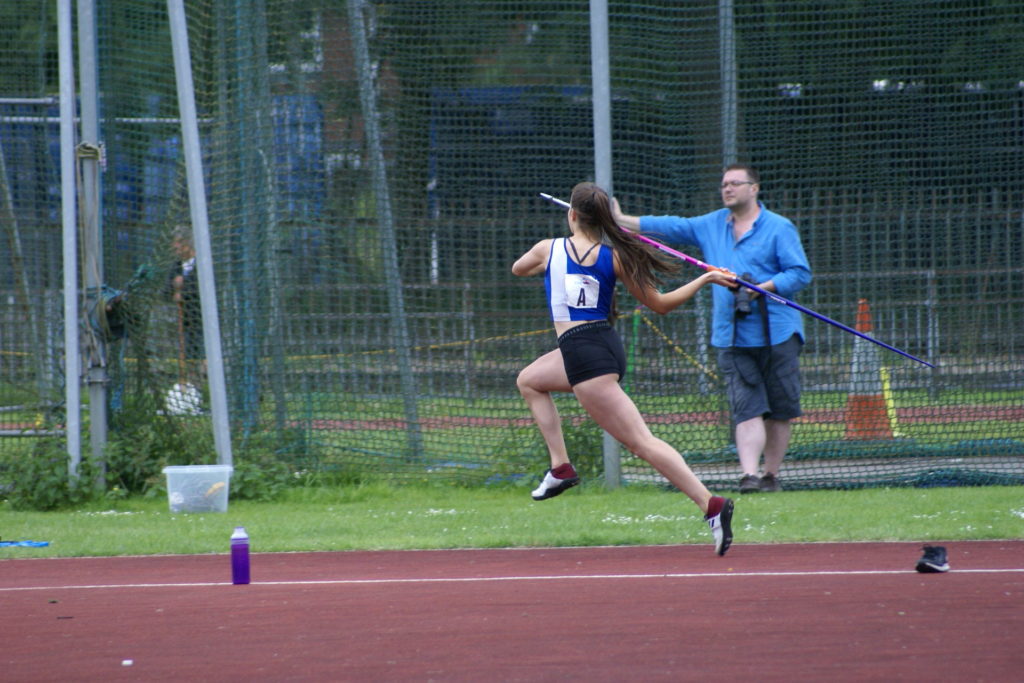 David Holman was the next athlete setting new personal bests. Two weeks ago David who is in his first year as an U17 chopped a massive 12 seconds off his 800m time to clock  a new personal best of 2.12.50. Yesterday he took on the 1500m in a race of eleven mixed aged athletes and replicated his 800m performance by chopping another twelve seconds off his time to set a new PB of 4.30.36, a performance derived from the fact that he has kept his training going really well and been disciplined under the conditions of lockdown, so it was no wonder that he told us he was “really happy with his race”. 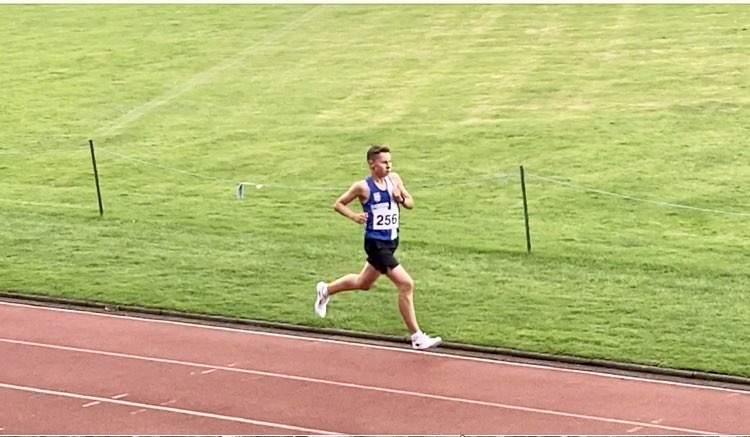 No let up with new personal bests as bottom of age U17 Hayden Mercer raced the 800m for the first time since August 24th in 2019. He went into his 800m race with a personal best of 2.07.00 – set in the Lancashire County Championships 2019 where he took the Silver Medal. Today he had a very good run to set himself a new PB by a second and a half in another mixed aged group race, placing 4th with his 2.05.48 clocking. Speaking to the Club after his Race, Hayden commented “it was great to back competing on the track. It was a tough as everyone had similar times but always good to get a new PB”. 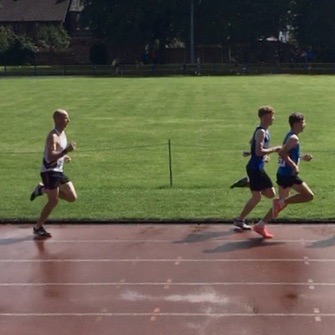 U15 Keira Haxton and her brother – U13 Matthew entered the 800m. Keira opened ran her first 800m in well over a year at Trafford a couple of weeks ago where she clocked 2.37.23 and today improved that by nearly three seconds as she placed 3rd in 2.34.44. For Matthew, this is his first year as an U13 having run just one 75m and 600m race in 2019 as an U11. In his first ever 800m race on August 8th at Trafford he clocked a time of 2.36.57 and today he improved that by nearly two seconds to set a new PB of 2.34.42. Afterwards Keira and Matthew spoke to the Club about their races with Keira commenting “I felt i had a good race, but it was difficult to pace as I out at the front on my own for most of the race – improvement from last time, so overall it went well.” whilst Matthew said “I have enjoyed running on track, only my 2nd 800m run and pleased it was an improvement from last time” 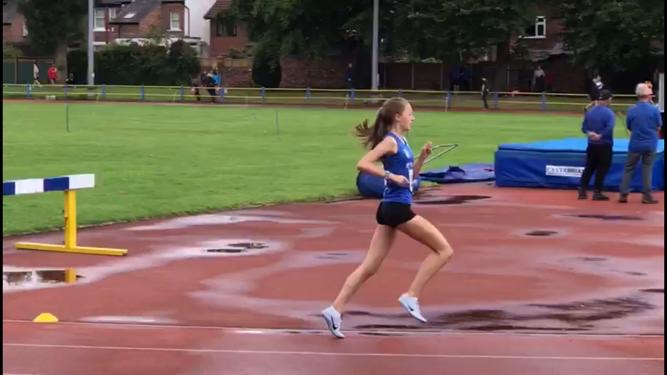 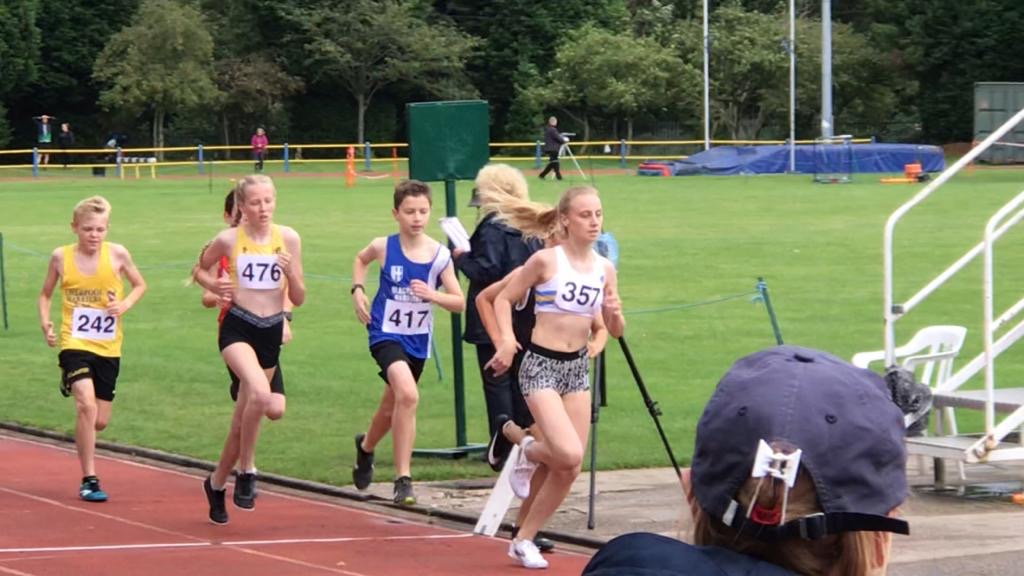 Another athlete moving up in age was Jonny Gough – whose events are Long and Triple Jump – is in his season as an U20 and the Trafford competition was his first since August 10th in 2019. His day was pretty solid as he leapt out to 5.75m in the Long Jump for 4th spot and took 3rd place in the Triple Jump with a distance of 12.18m. Jonny spoke to the Club after his events and told us that “it felt good to be back competing after such a long break! I was happy to get some decent jumps under my belt to start the delayed season”. 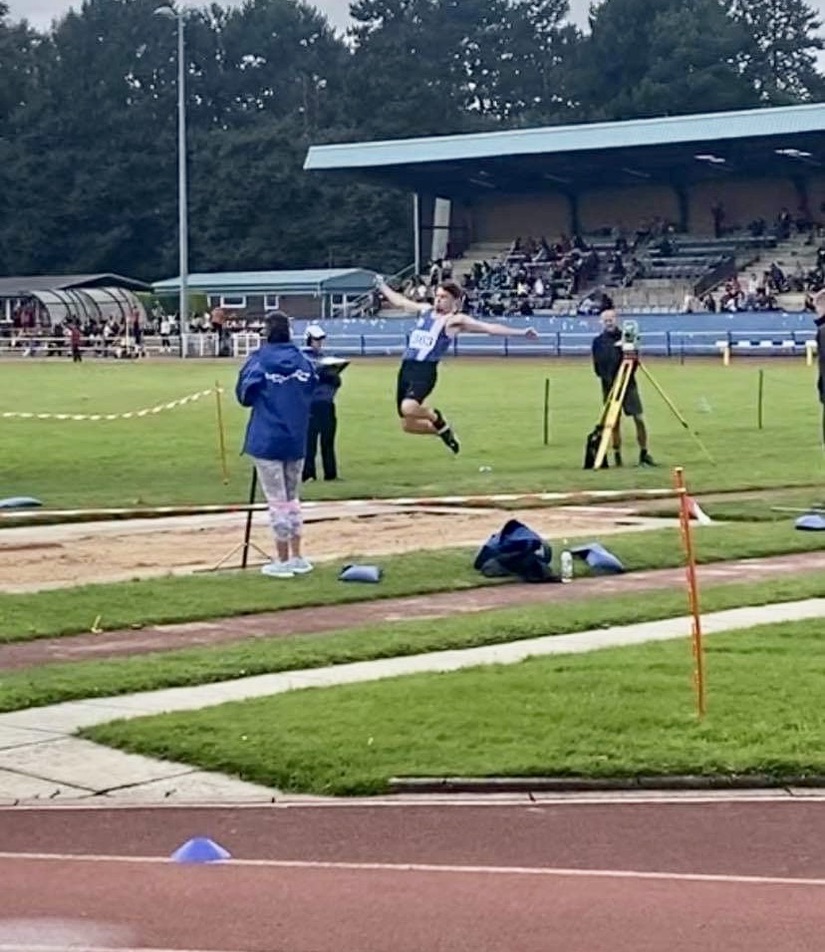 Abby Stratton is also in her first season as an U17. As an U15 her concentration was on the 1500m where she clocked a personal best of 4.53.3 to win Bronze at the Lancashire County Championships. Abby’s last race on the track was in September 2019 and this season she opened in great style as she set a new personal best of 2.22.12 at Trafford on August 8th. Yesterday she took on the 1500m and set another new PB of 4.51.96 as she placed 7th in a mixed male and female race featuring a field of twelve athletes. Afterwards, Abby spoke to the Harriers commenting that it was her “First 1500m this year and I felt I set of a little to fast on the first lap but then settled in and then pushed hard for the last 100m to sneak in a new pb – good to be back”. 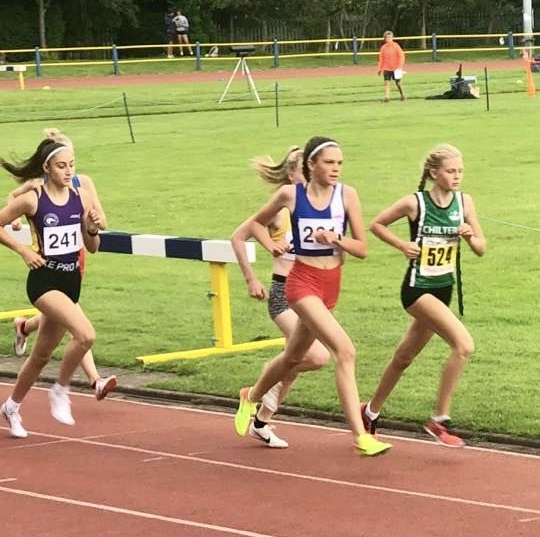 Matthew Heywood who is a second year U17 finished in 4th place at the English Schools Championships in 2019 with a throw of 52.00m in the Hammer (5kg) as well as medaling at County and Regional Championships in the Hammer too. His last Hammer competition took place in October 2019 which is a long time between events and given Covid, has had no possibility of training in a Throws Cage now for some six months. Coming out at Trafford yesterday to win the Hammer with a Throw of 46.58m was pretty good performance given the context as he told us that it was “Not quite what I wanted, not trained in 6 mths due to the virus, but it was good to just get the chance to throw. Wish I could have done better, looking forward to being able to get back training”. 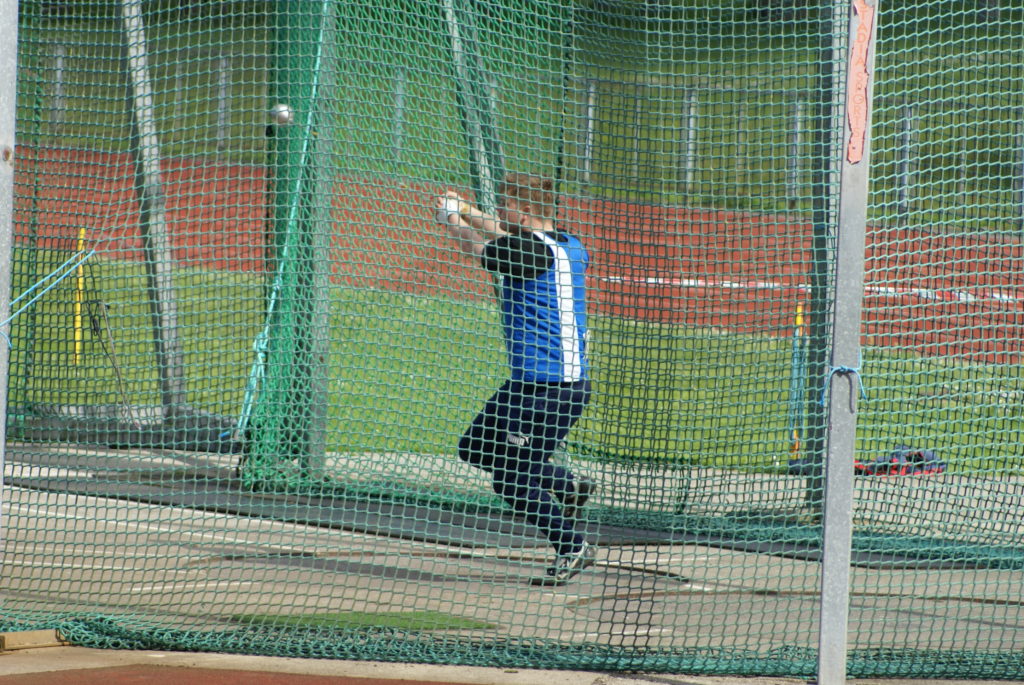 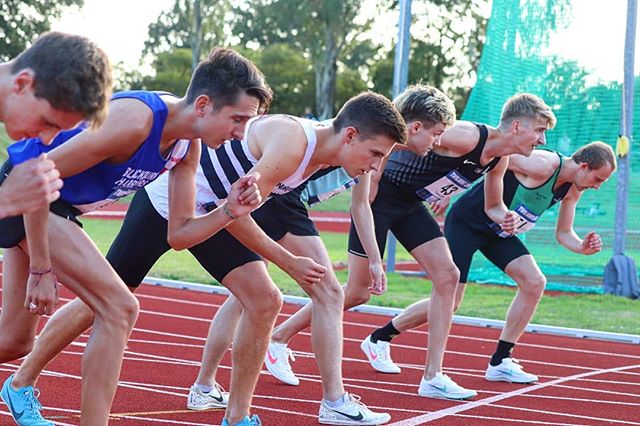 Nicky Saunders (U15) was a Discus Silver Medalist at the National U15/U17 Track & Field Championships in 2019 – Discus Bronze Medalist at Northern U15 Championships – Discus Winner of Lancashire Schools and Lancashire Counties and placed 4th at the English Schools Championships and at the end of 2019 she stood in 3rd position in the U15 Discus national rankings and was 21st in the Hammer.

On Thursday August 20th, she stepped up in age group to U17 and made the trip to compete in the Run, Jump, Throw meeting at Doncaster. Going into the fixture, Nicky had only competed once – in March 2020 – since September 2019. Covid 19 has impacted athletes involved in Field Events in a particularly difficult way, as they absolutely need to have access to facilities at their Tracks in order to train anything like normal. So all credit to Nicky for taking the opportunity at this Doncaster meeting to take on Shot and Discus where she placed 4th in the Discus with a distance of 29.71m and threw 8.39m in the Shot Putt which was just 15 cms short of her personal best. (Doncaster Results) With her first competition in a long while completed, Nicky commented “it was good to be back in the circle and was very well organised”.

Just three days later, Nicky was on the road again, this time in the Open Meeting held in Nuneaton where she competed in the Discus once again. Her competition featured only two U17’s along with two Seniors and one U20 and U23. Nicky improved by over a metre and a half to throw 31.44m for a seasons best. (Nuneaton Results) 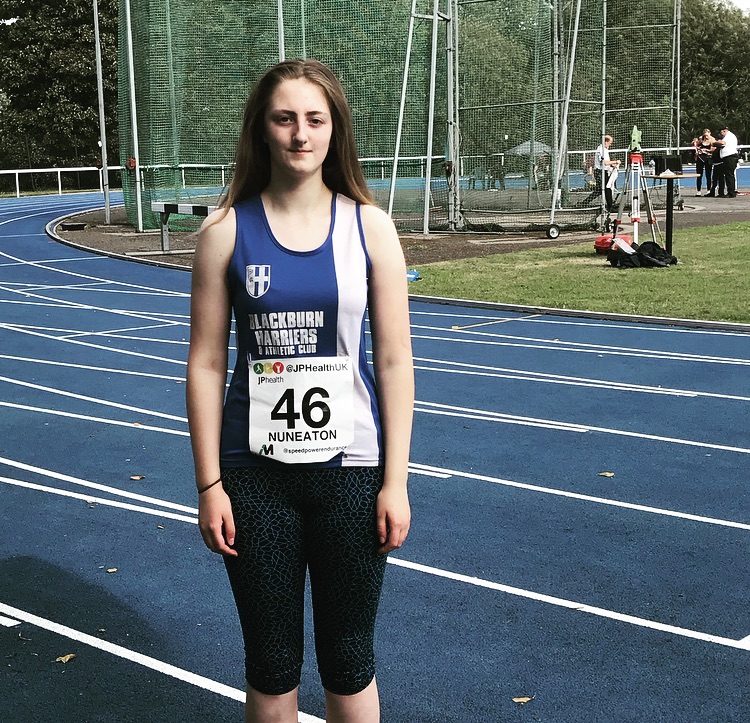