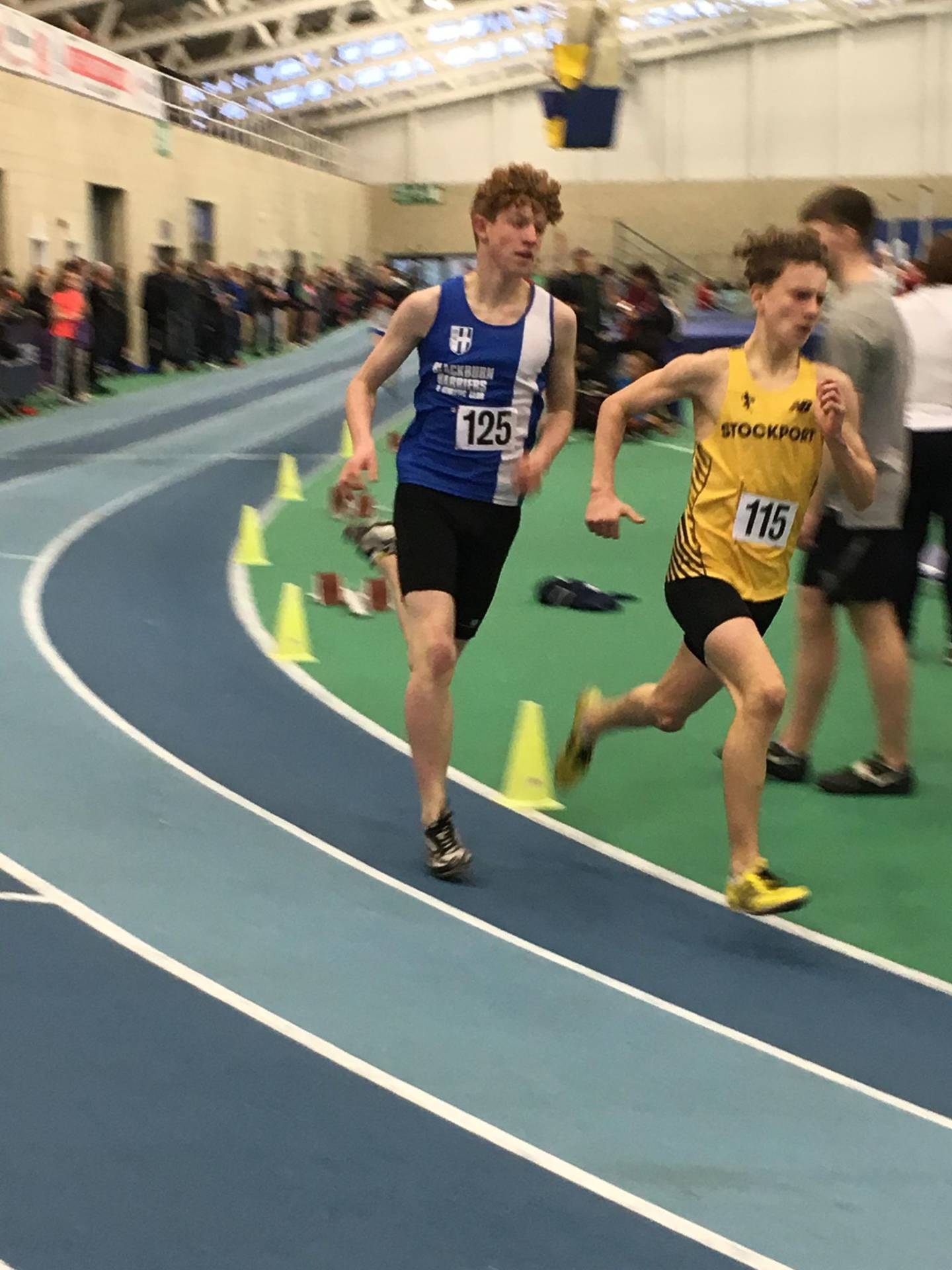 The second fixture in this years Indoor Series at Sportscity took place on Sunday with a number of Blackburn Harriers athletes involved in the action, setting four new personal bests between them.

U15 Hayden Mercer was running his first ever race Indoors and chose the 600m where he was up against another athlete – Thomas Manton – who was three seconds faster than him over 800m this year. Hayden closed that gap coming just three one hundreths behind him to place 2nd in a debut time of 1.34.44. 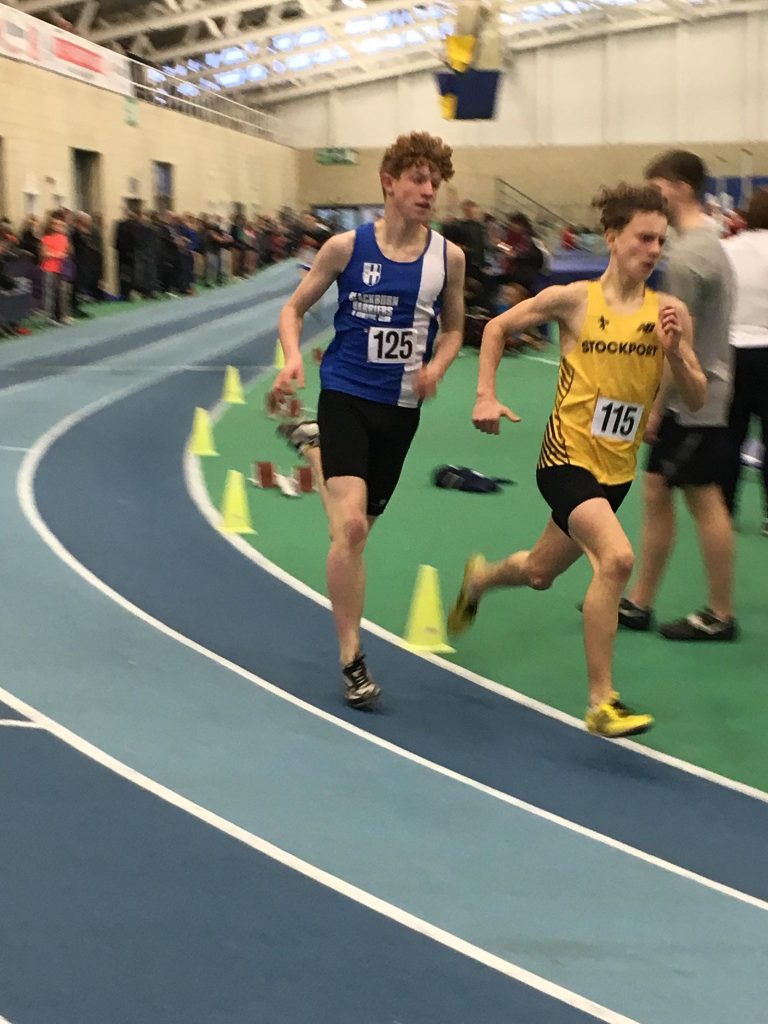 Ben Whittaker in his first year as an U20 started off in terrific style, winning his 60m Race in a time of 7.77 which was  a new PB by three tenths – going into the race, five of the other six competitors all had better personal best times than Ben which makes his run even better. Brother George Whittaker – contesting the U15 Boys 300m – placed 3rd in a time of 43.30 which was a big 3.7sec PB from last year when he posted a best time of 47.00.

Myah Booth who moves up to U17 this year took on the 60m Hurdles and Shot Putt. She finished 2nd in the 60m Hurdles in a time of 9.26 – an improvement of three tenths for a new PB and then placed 3rd out of eleven competitors in the Shot Putt with a throw of 10.20m.

There were only two competitors in the U15 Boys 60m Hurdles – both of them Blackburn Harriers. Jayden Brammer crossed the line in 1st place with a time of 8.99 to set a new PB by three tenths, his previous best being 9.29 at the first fixture in the Series on December 2nd. Ben Boocock took second spot also with a new PB as he clocked 9.56 – running 9.57 in the December 2nd fixture.

U20 Thomas Marchant was back on the Fells racing at Stoop, his last outing being at the British Fell and Hill Relay Championships (Grasmere) back in October. This Race covers 8km and 250m of ascent with 209 runners on the start line. Tom had a very good run coming across the line in 13th place, clocking a time of 34.33 – the race ebing won by Jack Wood in 30.27, six seconds infront of 2nd placed Sam Tosh. 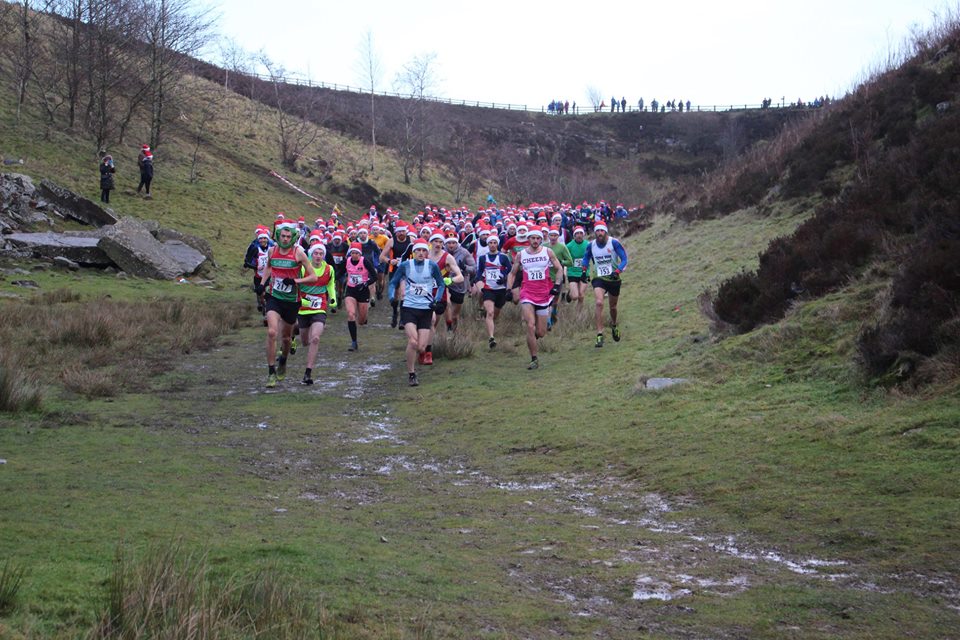 Tom Marchant spoke to the Harriers about his race saying that “The race was a fast pace from start to finish. when I set off I started with the front pack and followed their pace for the first 2 miles or so and managed to keep with it until reaching the top of the first climb where my legs, unfortunately had gone from the fast climbing. However I managed to finish fast and strong. Overall a top performance, back feeling good again and happy with the result despite the cold-ish and windy weather on top of the climbs ” 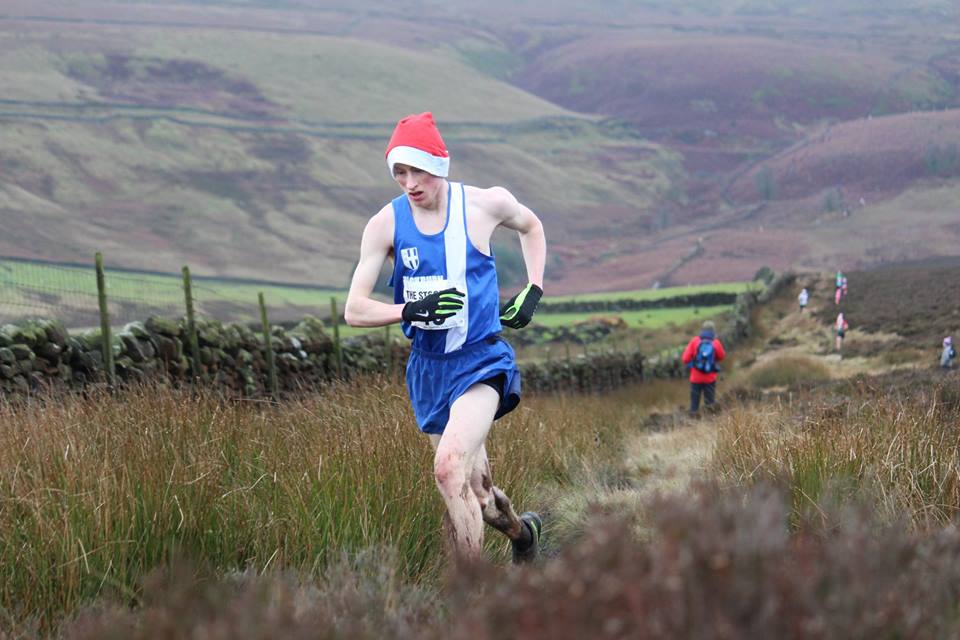 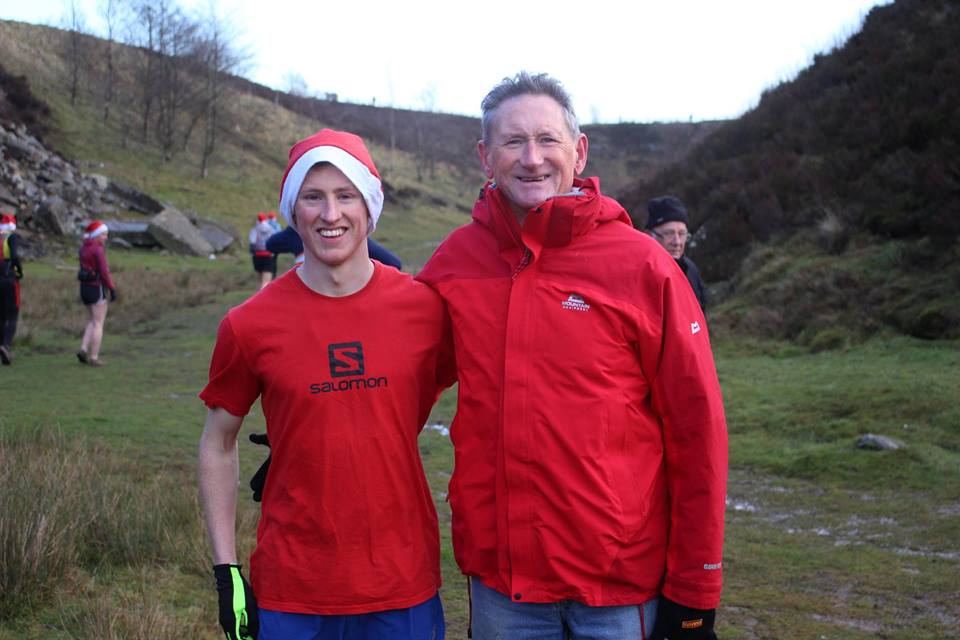 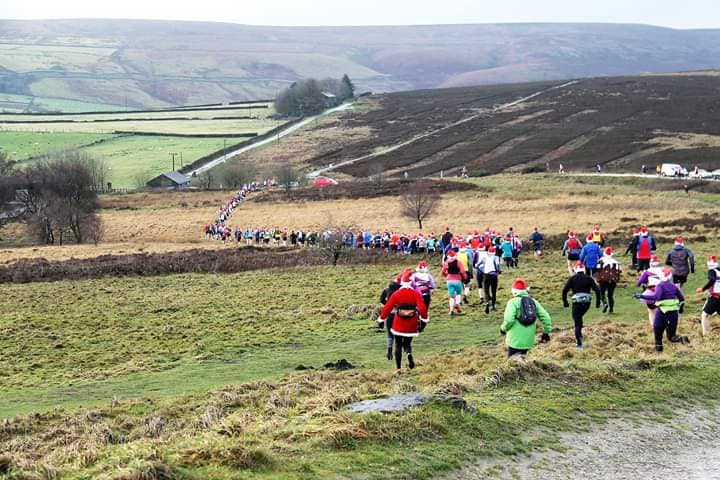 One hundred and six finishers in this race won by Tom Simpson in 40.11 and run in pretty appalling weather conditions. Round things and brass monkey could have been key words! 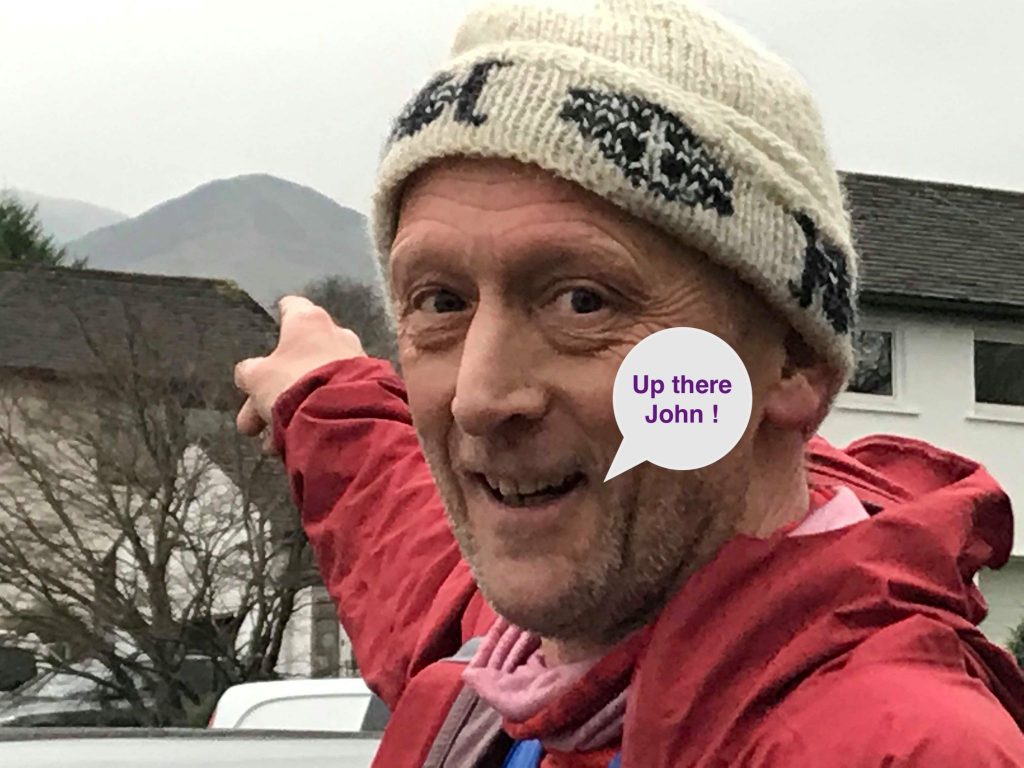 At the end of the day, both John and Ian reflected on the race with John commenting “I woke up Saturday morning and thought F.A.B., Thunderbirds are go, and another Lakeland race! Then I remembered it was S.O.B. not F.A.B. and a race that was part of the Kong Winter series. Now that’s not King Kong, he was in a different race! So what is S.O.B.? Well, a short intense 5 mile blast over Stile End, Outerside and Barrow. That’s 3 Lakeland fells, 2 of which were Wainwrights and 1640 ft of climbing.The forecast said winter! It was! Frozen ground from the off. Temperatures below zero on the tops and winds that were whipping up to gale force. Windchill was promised at -22, so I did feel the nip, especially wearing shorts………………………The clubs recent Fell running promotion seemed to be paying dividends as the number of blue and whites on the start line had doubled. So 2 of us set off! Keeping ahead of Ian, I held back a little after the gate and allowed him to come alongside. I attempted to point out a sneaky line off the top of Barrow for our return. Pushing on I thought that may be a mistake when we come to that descent. Sure enough after keeping ahead on all 3 climbs he shot past me on the Barrow descent. He took the ridge, I took the sneaky line, but favouring to keep my 2 front teeth for Christmas, I minced about on the technical stuff and lost time. By now Ian’s, ‘no fear’ descent gave him a clear lead. All I could see was his bobble hat away in the distance as I tried to chase him across the final field. Through the woods, over the bridge, down the lane and done, 47 seconds behind the man from Mellor! The journey home down the M6 was another story. Thanks Storm Deirdre!” 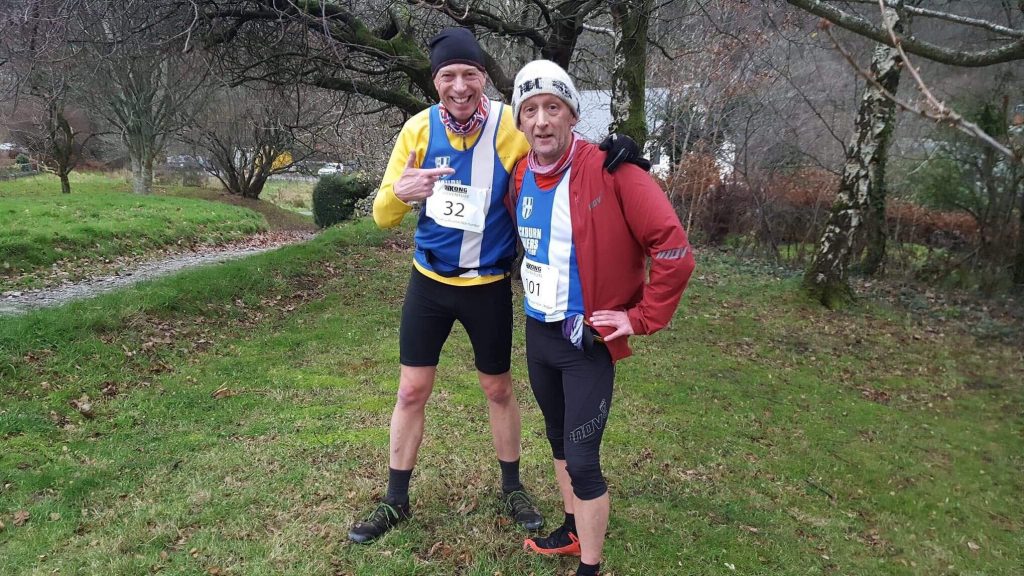 Ian Clarkson told us “John Orrell and myself were in action Saturday 15th December, taking part in the Kong Winter Fell Series, which is five races held over the winter in the Lake District. The S.O.B Fell Race (Stile End, Outerside, Barrow) 2nd Race in the series and our 1st. It is just under 5 miles with over 1600 feet of ascent on a very bitterly cold and windy day, perfect!! A nice steady start with a gradual climb that got a bit steeper and off John goes, onwards and upwards. Stile End out of the way, then gingerly drop down and upwards to Outerside, with some good running up towards Barrow, where I catch a glimpse of John!! Barrow has a wonderful descent back down, time to go!! Catch up with John, leave John, deal with the sting in the tail, slight ascent through some woods, hit the tarmac and finish. 1:02:37. A lovely little race in fresh conditions. 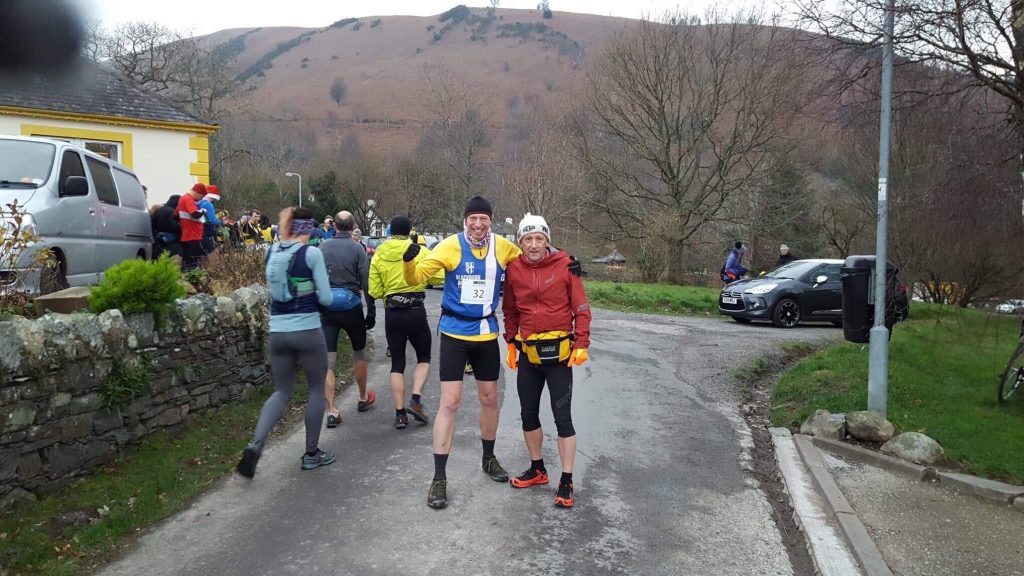 Three hundred and forty five runners turned up for this, and rumoured to be the final ever running of this very popular race which provides for a lot of fun, plenty of prizes and fond memories of a good day out. The race was won by Chris Houldsworth in a time of 27.38 with Gary Priestley in second  (29.13).

Eight Blackburn Harriers ran the main race which saw Calum Holmes be the first Harrier across the line for the Club in 14th place overall – clocking a time of 33.51 and followed in by U17 Harry Wilkin in 26th spot (35.44) with Daniel Balshaw in 33rd spot (37.01. 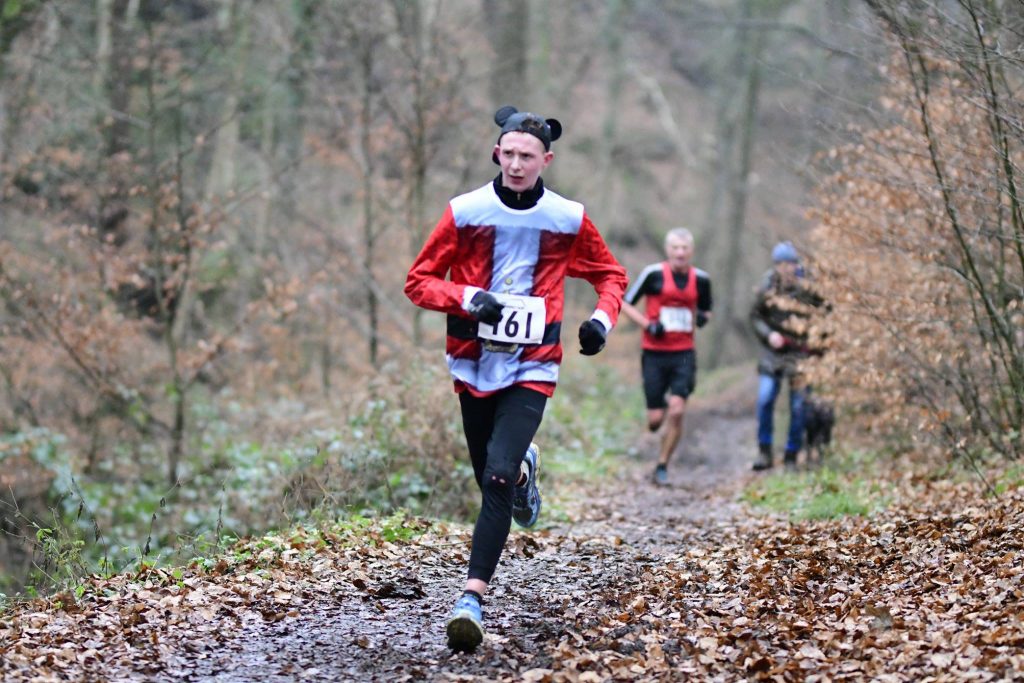 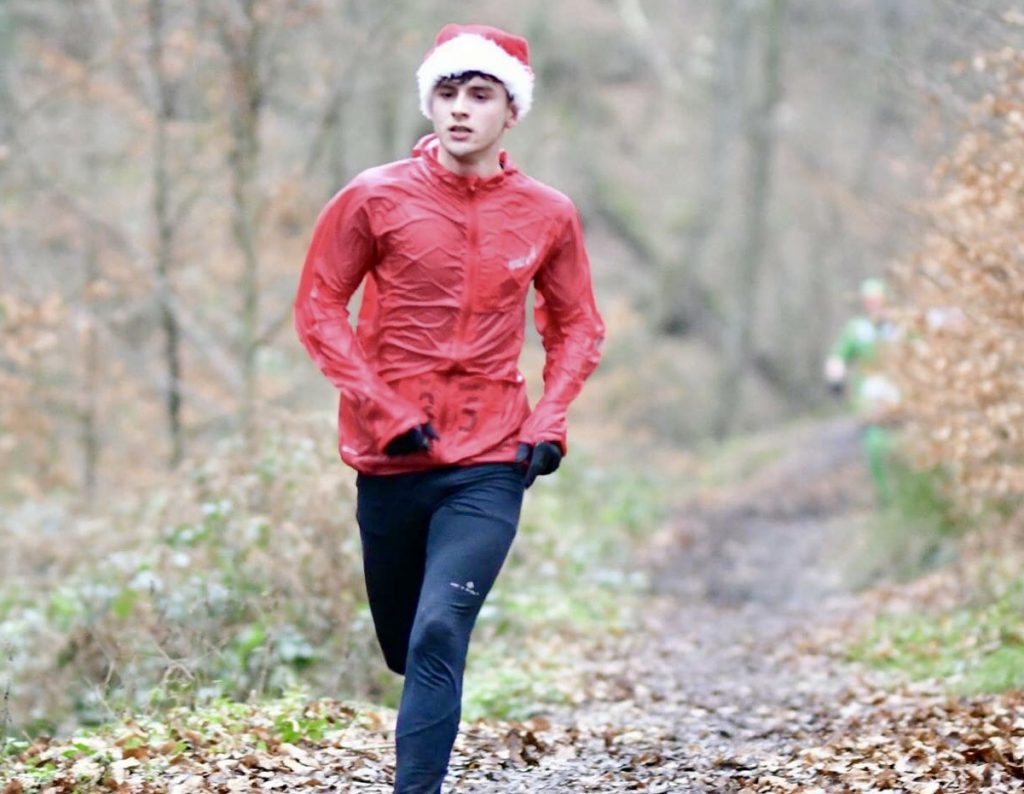 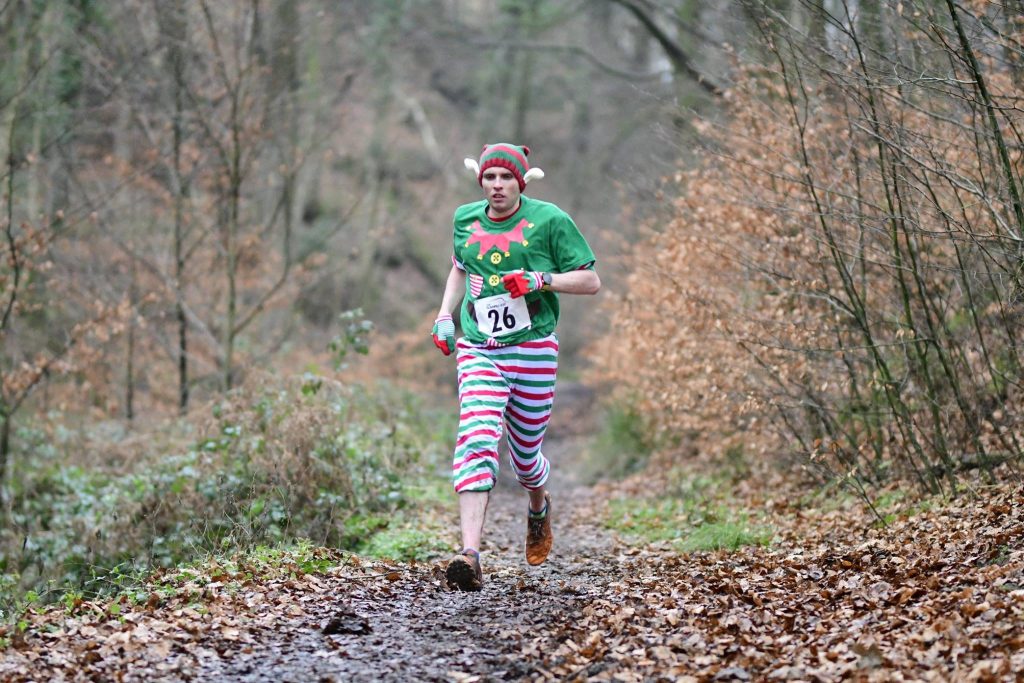 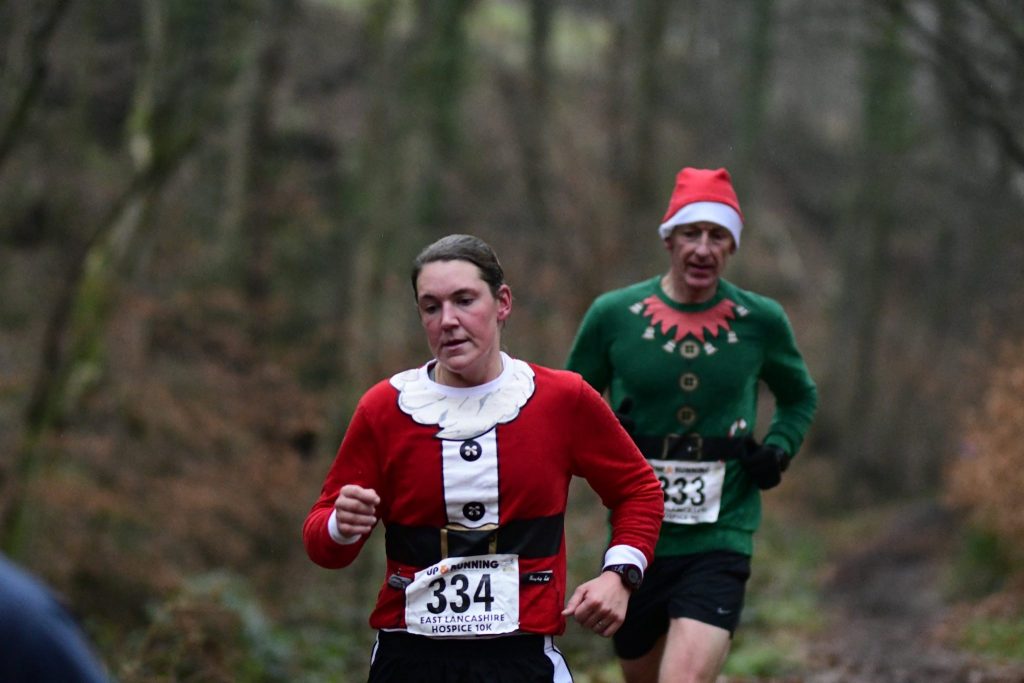 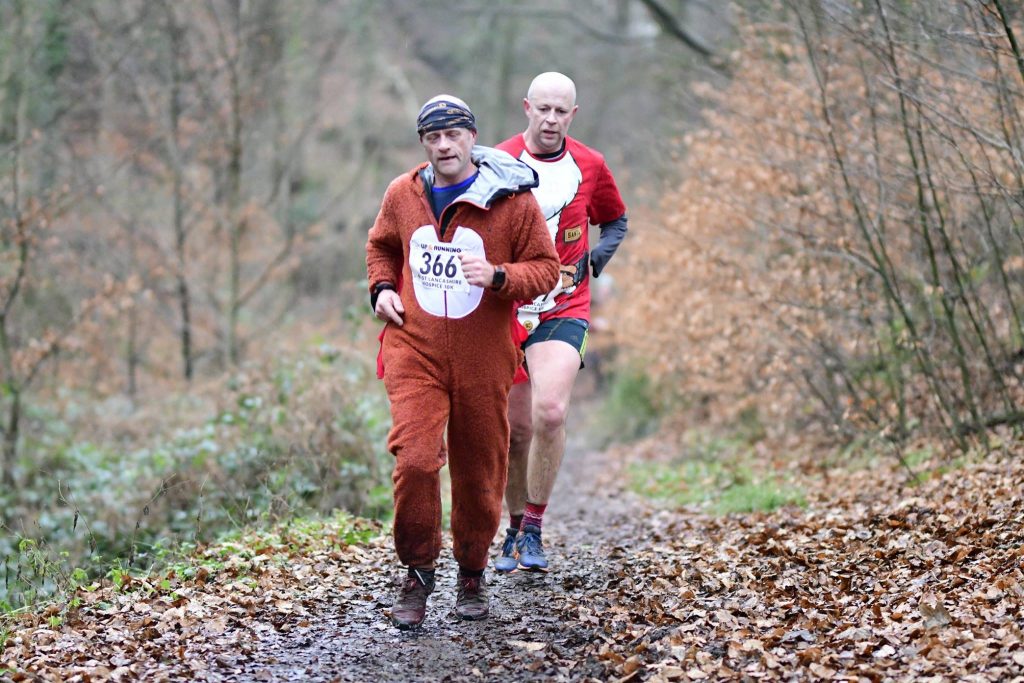 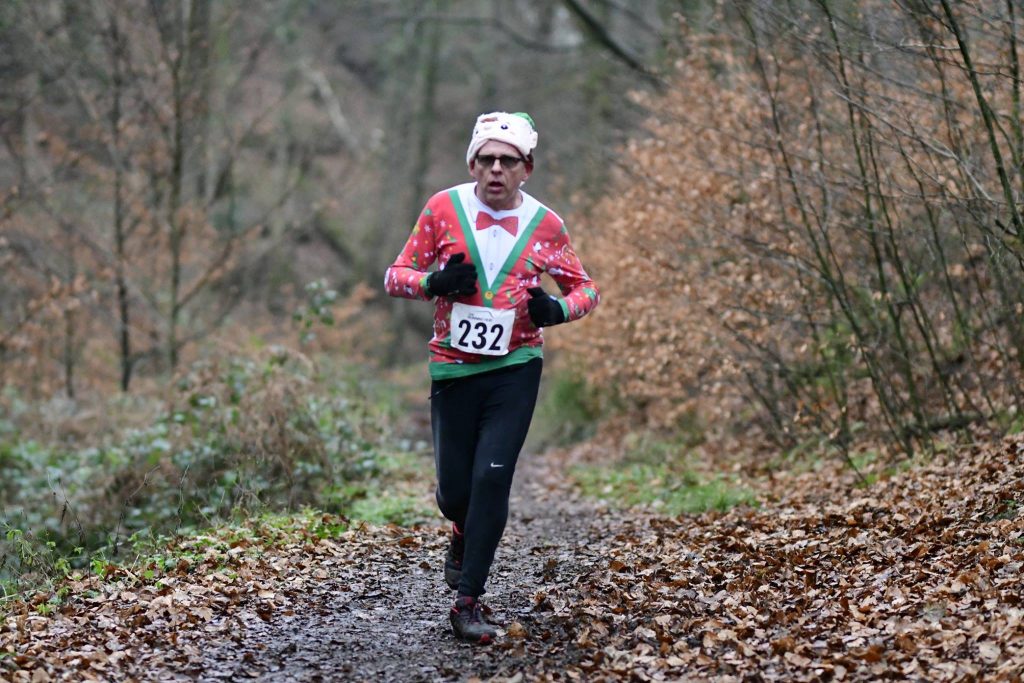 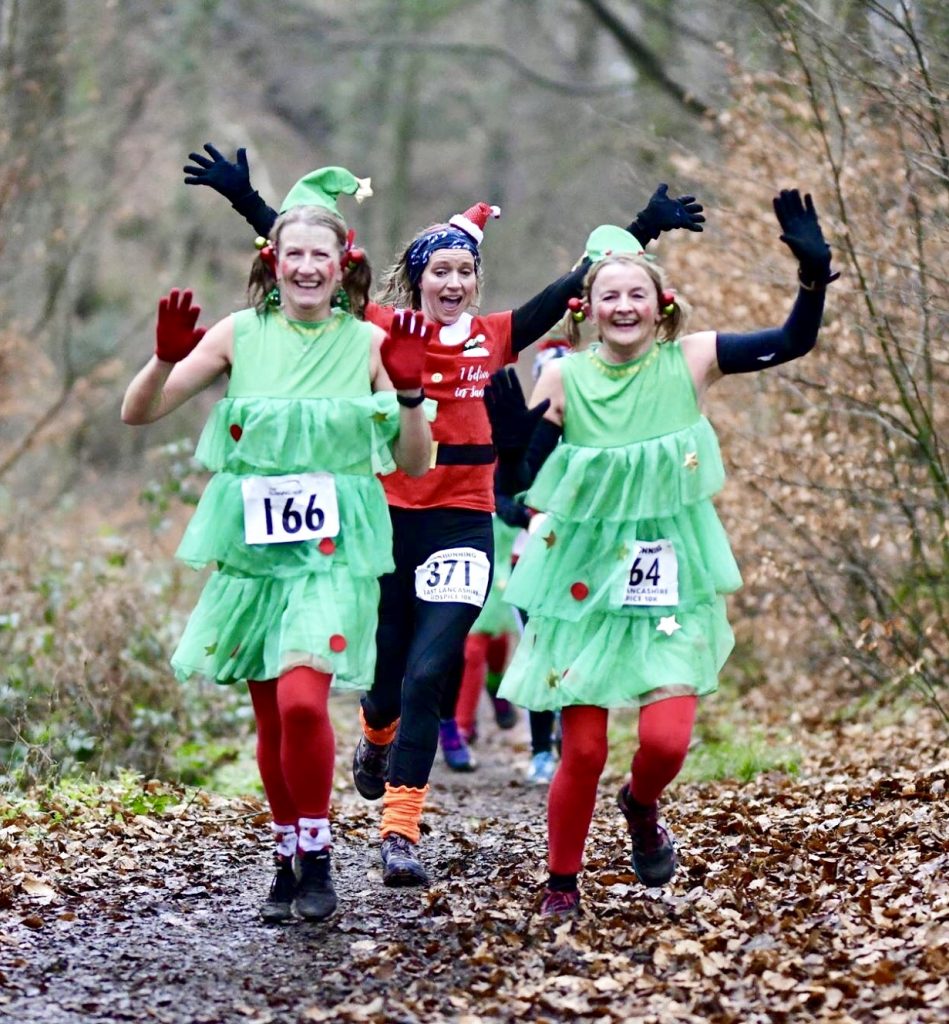 Three of the Juniors ran in the earlier Race – The Junior Turkey Trot – and Keith Gill was there to watch them, commenting “On a cold winter’s morning a small field of u13 runners did the Hurst Green Santa Express trail run. A picturesque course through the woods was the perfect backdrop for the 1.5  mile fun run. Oliver was 1st runner home, with Saul in 3rd and Lulu safely in the pack. An enjoyable morning with a selection box prize to kick start xmas” 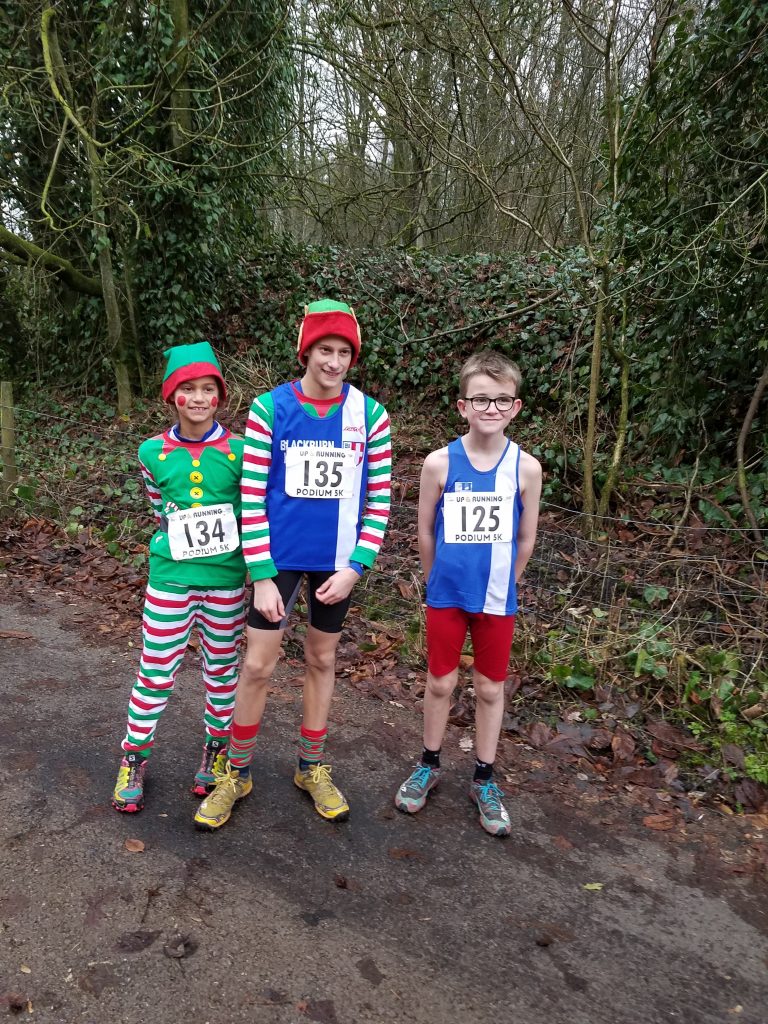 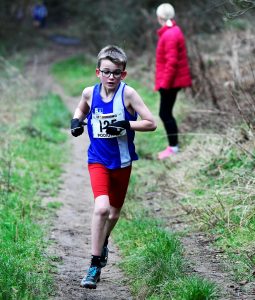 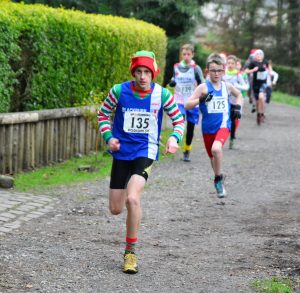 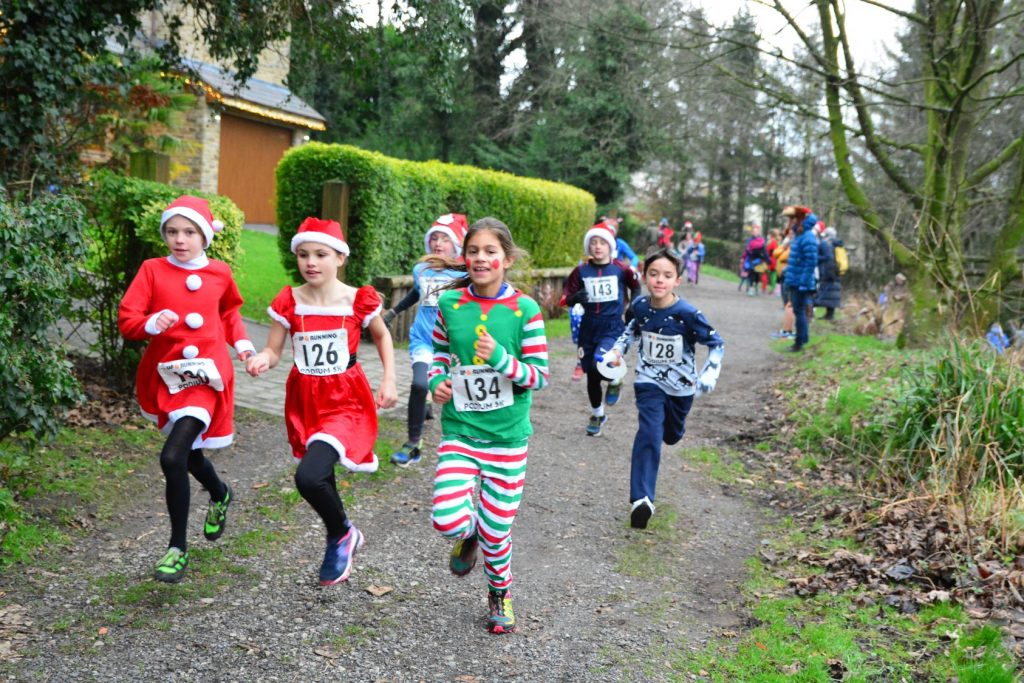