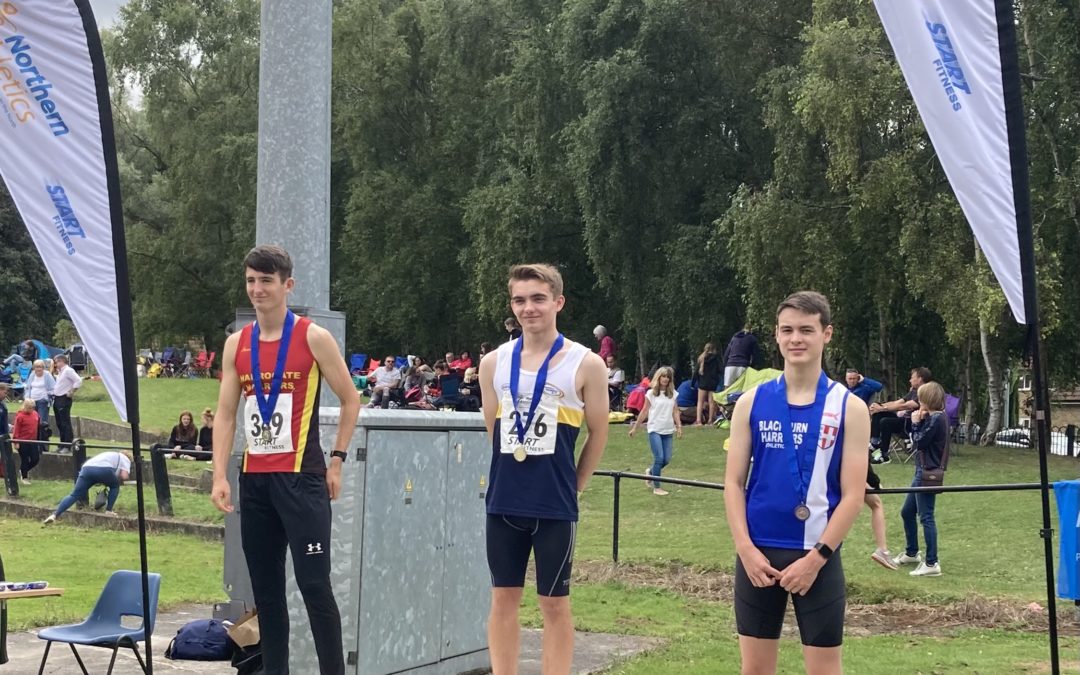 Abigail Stratton went in the U17 Women’s race which was run as a straight Final. Following a real battle with Vale Royal’s Grace Roberts who was four seconds faster on paper, Abigail took 3rd place and the Bronze Medal in her first ever appearance at the Northern T&F Championships. Speaking to the Club after being presented with her Medal she told us that she “Felt strong and managed to stick onto the back of third till the finishing straight were I managed to battle with her to come away with 3rd place what I was very happy with”. 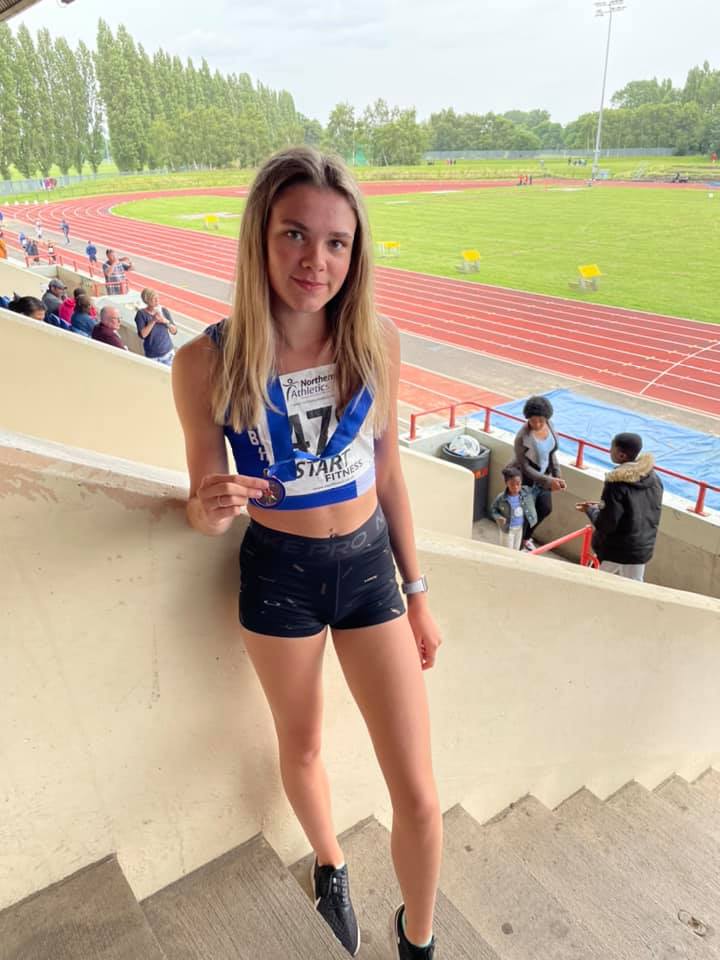 Hayden Mercer had to negotiate the heats of the U17 Men’s 800m and successfully qualified with a time of 2.05.93 in 3rd spot. In the Final Hayden came home in 4th spot in a time of 2.03.41. All three athletes on the podium in this race were sub 2 minute athletes, the winner – Holmfirth’s Kristian Green going into the race with a personal best of 1.53.90 and a comfortable winner in the end. After the Final Hayden told us that it was “Great to be back at the Northerns, always hard doing heats and finals but pleased with my result”. 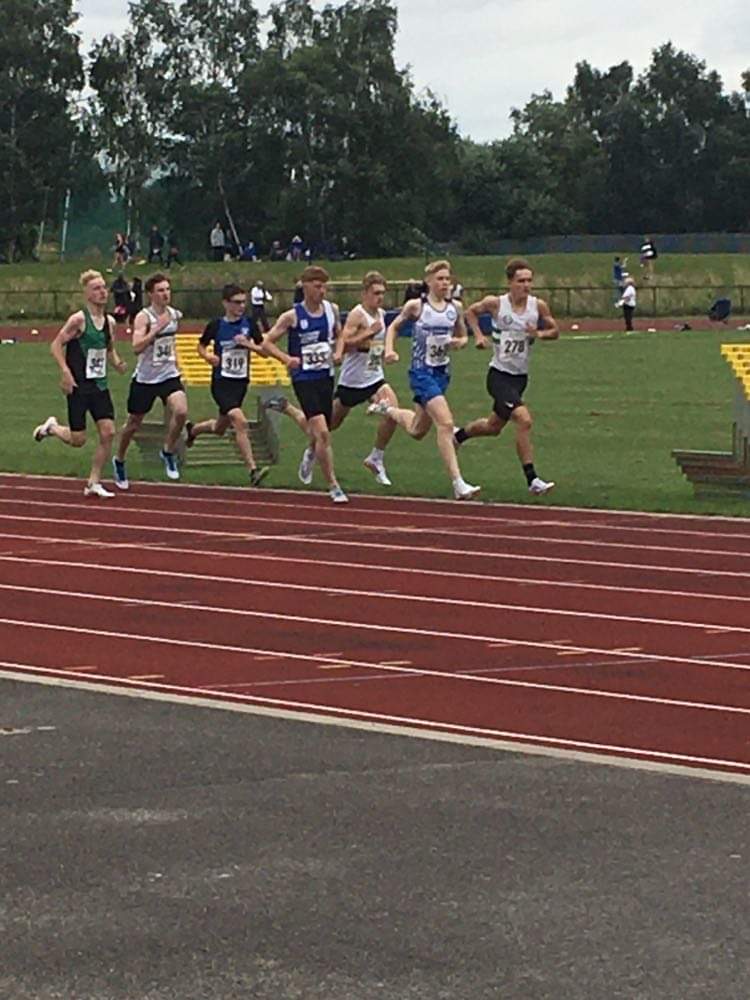 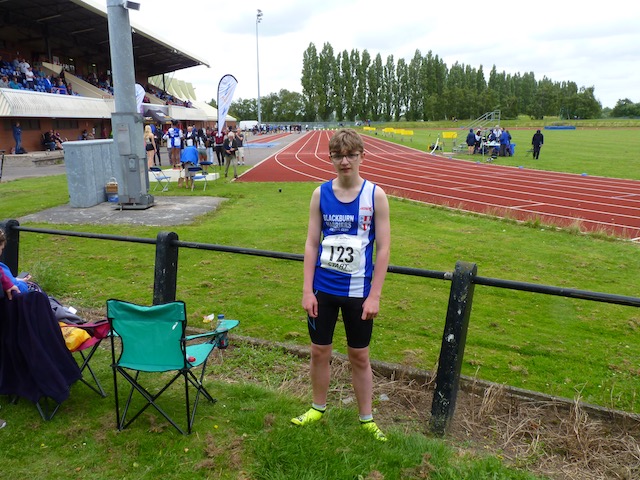 Grace Bontoft had a very good championships in the U17 Women’s Hammer – a straight Final featuring eleven athletes. With every throw being over 40m, Grace was very consistent as she placed 5th overall with a best of 43.31m. Reflecting on her Championships, Grace told the Club that “It was a really close competition with everyone within less than a meter of each other. I was really happy with how I finished against the rest of the field as I had a pretty consistent series with all throws over 40m. It was great to be out competing with a talented group of girls“.

Thomas Monks was up against it in the U17 Men’s 400m after qualifying for the Final with a 53.71 time in the Heats with five of the eight finalists all top of age. He placed 7th in the Final clocking 54.65 and told the Club after that he was “Very happy i made it to the final, especially as a first year U17. I was hoping for sub 53, however the conditions were windy and not ideal for a pb. I’ve gained experience and I’ll take that but I still have a lot to improve on, mainly my endurance, which keeps me focused for the future.” U17 Ben Boocock had already won a Northern Indoor Championship Silver Medal as an U15 in 2019 and was looking to add another Medal here. Going into the Final as the third fastest in the race on paper, Ben maintained that form to win the Bronze Medal as he finished 3rd in 15.40 saying after that “it’s good to be back competing, I’m looking forward to the indoors and next season“. 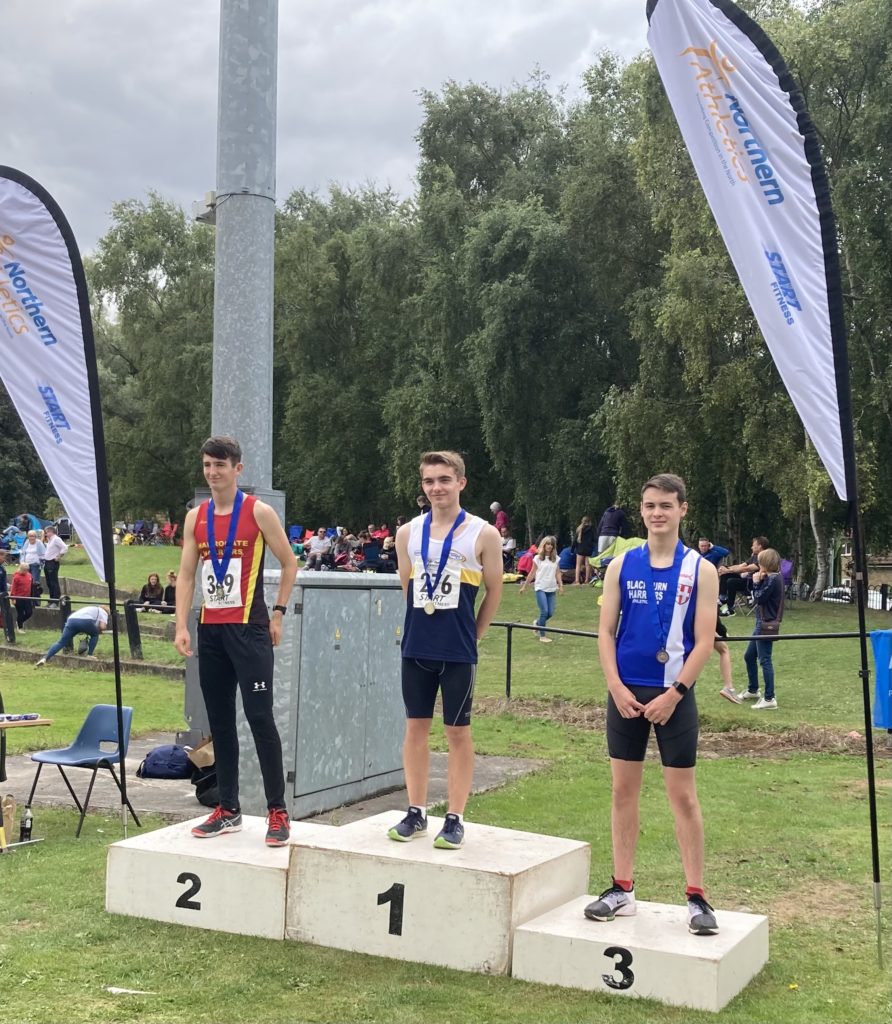 Matthew Smith was one of eight athletes in the U15 Boys High Jump Final and only one of two who were bottom of age, all the others being top of age. He cleared the same height as the Bronze Medal winner of 1.60m but due to countback he finished 6th overall. Looking ahead, this young athlete has plenty to concentrate on as he has the  Lancs champs to look forward to next week, and the English Schools Combined Events Pentathlon final at Bedford. 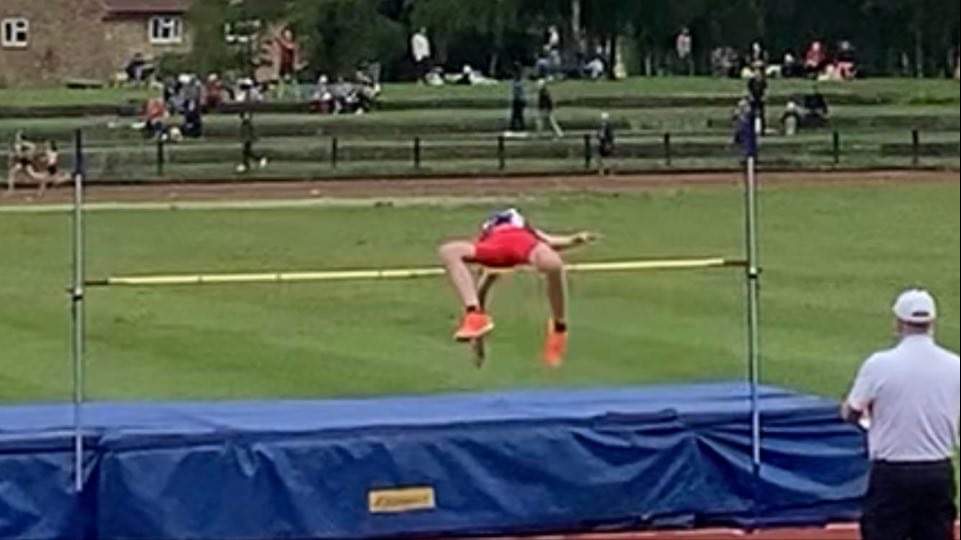 Making her first appearance at the Northern Championships was U15 Millee Schofield and taking on the sprint double. Millee started off by qualifying from her Heat to the 100m Final in 3rd place with a time of 13.51 followed by a 13.57 clocking in the Final in 5th position. On to the 200m and again she qualified for the Final running 27.72 in 3rd place and then in the Final set a new PB of 27.17 in 6th place and the only athlete to do that in the Race. Taking on the double and qualifying in both events for the Finals from the Heats and topping it off with a new personal best made it a very good weekend for this young athlete.
Millee Qualifying for the 100m Final

BMC night at Eltham on Saturday August 14th saw Callum Davidson continue his fine season with yet another new personal best. Racing in the 1500m B Race, Callum went in with a best of 3.52.9 set in winning the Northern League West Premier Division race on August 1st. At Eltham he cut that time by close to two seconds as he posted a new PB of 3.51.1 in 6th spot. In his first season targeting the track, Callum has run 3.51.1 (1500m), 8.16.90 (3000m), 14.09.81 (5000m), 29.56.99 (10000m) as well as setting a new personal best for 5k of 14.28, emphasising the good form he has maintained throughout. Speaking to the Club, Callum commented on his race and his season “Very pleased to PB for the 9th time in a very busy 11 race schedule on the track at the final BMC of the series at Eltham. It’s been a huge breakthrough year for myself under Nick’s supervision and guidance with PB’s in every discipline from 1500m-10,000m. Last nights race was scheduled to go off at 1:57/3:43 pace so I knew I was up against some tough opposition and had to execute my own plan. I sat off the pace initially at the back of the field however unfortunately when the group split I consequently missed the break and ended up front running a small group of runners all the way out from 500m to chase down the leading 4 runners. After splitting 62/2:03/3:02 I simply ran out of steam in the final 300m. With more experience on the track I know my times will naturally drop but for now running 3:51.1 in my first season on the track is promising for the future and a credit to all the hard work behind the scenes that several individuals are putting in and to those in thankful.”

Well done to U15 Harry Sambrook who ran at the Trafford Grand Prix (August 10th) knocking nearly six seconds off his personal best to set a new PB of 2.26.89 for the 800m. Ellen Sagar-Hesketh also in good form, clocked 2.22.47 –  just four tenths outside her personal best 0f 2.22.00, which she set recently in the Northern League Match resulting in the Harriers winning the Premier West Division for 2021. Matt Ramsden ran in Heat 2 of the 1500m having already broken the sub four minute barrier for the distance. In a ten strong field Matt ran a time of 4.01.91 in 2nd spot behind the winner from Hallamshire – Leo Crossham (4.00.54). In the 3000m Races, Seniors Mark Magee and Marc Hartley featured in a field of twelve, the race being won by Chris Livesey in 8.40.90. Mark set himself a new PB by close to four seconds as he came home in a time of 8.53.15 whilst Marc ran a seasons best by some considerable distance, clocking 8.59.92, well over ten seconds faster than his previous best this year. The Burnley Lions 10k isn’t the easiest of courses and includes a long climb, which the athletes have to run twice. One hundred and thirty one runners lined up and finished which saw Barlick’s James Craig take the honours in a time of 33.55.

Jacob Watson was running his second race of the year having clocked 15.28 at the Podium 5k in April. He warmed up for the Colne 10k with a couple of park runs in the lead up and ran well on the night to place 2nd behind Craig with a time of 34.27. Ryan Bradshaw made it two in the top ten as he finished in 6th place clocking 35.20 after a battle with Clayton’s Adrian Cheetham who came in just one second in front of him. Post race both athletes commented to the Club with Jacob saying “Second race of the year for me and maybe a sign I need to race more! A bit disappointed to be down on my time from 2 years ago, however I’m pleased with second place to Jimmy Craig (Barlick). I tried to stick with him, however after the last climb of the first of two laps he got the better of me and ran off into the distance. Just wish they’d flatten some of those hills out of that course!“.  Ryan told us that it “was a nice night for running the Burnley Lions 10k , albeit a little windy at times. I was pleased with my run – beating my previous times around the hilly course to finish 6th. Great to see fellow Harrier Jacob with a podium finish!” Still on the road and it was the turn of Blackburn Harriers Matt Nuttall and David Almond on Saturday August 14th as they took on the Catforth 5k  featuring fifty four runners in total. The race was won by Bolton’s Tommy Harrison with Matt having a good run in 2nd place, running a time of 16.49 (1st V50) and David placing 6th (1st V55) in a time of 18.18. At Run the Lights 10k 2021 on the same day (RESULTS) Rachael Ashcroft and Mark Wilkin were part of the of the race which had over seven hundred finishers – the race being won by Spenborough’s Martin Peck (33.18.49). Rachael was having her first race for the Club and did really well, coming home in 58th spot overall and 7th Woman in a time of 44.47.12 commenting after to the Club that “Blackpool’s 10km ‘running the lights’ was a great experience to kick start my return to running events! I owe the flat, steady route and my training on the track with George Woodburn for my 10km PB! I was the 7th female over the line out of 369 women. It was great to see so many runners out enjoying it under the bright and dazzling lights of Blackpool. Looking forward to more events to come!” V55 Mark came home in 84th place overall and 3rd V55 with a time of 46.26.68 which was a new PB by over a minute. Clare Willkin took on the 5k race finishing in 112th position, posting a time of 32.31.76. Talking to the Harriers after the Arncliffe Gala Race John said that it was “My 6th BOFRA Championship Race out of the seven so far. Got myself to second Vet 50 for a period of about five weeks that spanned three races, but dropped to 4th after missing Farleton Knott and that’s because I was doing The Pete Bland Memorial Kentmere Horseshoe race. John Horrocks was at that too. Worked really hard to stay ahead of my rival in the champs and was in front most of the way around. Ahead by the first flag, ahead at the second flag, still ahead along the ridge, turned at the trig, still ahead, charged down the two descents, still ahead, held him off on the track back to the village, still ahead and then in a moment of weakness he passed and I had nothing left to respond. Gutted really after all that effort to be just a few just seconds adrift, and even a pint at the end did not make up for it, nor did smashing my PB by over a minute. There’s no prizes for second best!”