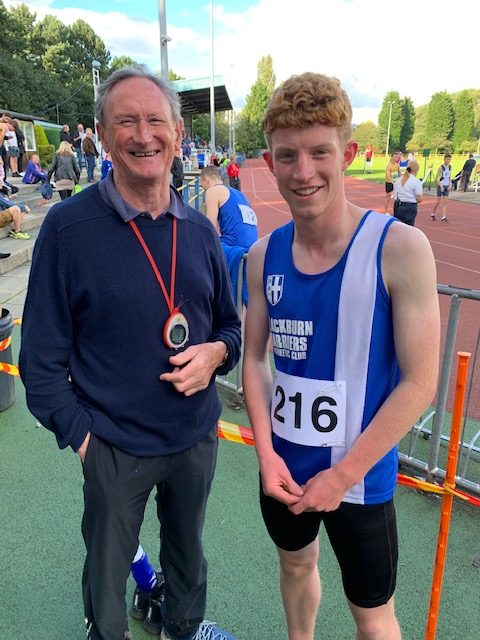 Well it turned out to be quite a day at the Trafford Open Meeting for Blackburn Harriers athletes, who produced some very good performances, against a background of having little or no access to a training track for the overwhelming period of lock down. It is testimony to the dedication of these young athletes in the way they found the means of continuing training, maintaining focus and to have the ambition & motivation to continue to improve the way they have. Fourteeen new personal bests and four wins was an impressive haul on the day.

U20 Joe Gebbie broke through the 4 minute barrier in the 1500m in a massively impressive way. His personal best going into this meeting was a time of 4.11.37 in his last race over the distance since August 2019. Joe placed 4th out of a field of eight clocking a huge new PB by well over eleven seconds of 3.59.58. A happy athlete spoke to the Club after the race, commenting “A last minute change from 800 to 1500, but it was worth it! Went out fast through 300 in 45. Settled down for the next two laps and I just sat in a front group of 5. 2:57 at the bell and I knew 4 minutes was a real possibility. Managed to hold it together in the final 100m and couldn’t be happier to see the lockdown training with Noel pay off”. Similar to Joe, bottom of age U20 Matt Ramsden set his outdoor 1500m personal best back in August 2019 clocking 4.11.23 and was looking to improve that. Twelve athletes in Matt’s race which produced 8 new personal bests as Matt came out himself with a huge new PB by over seven seconds to win the Race in a time of 4.04.13. Yet another happy athlete commented afterwards that “I was very excited to get back onto the track racing after such a long time and very pleased with my time a good kick start. Well done to everyone who ran”. 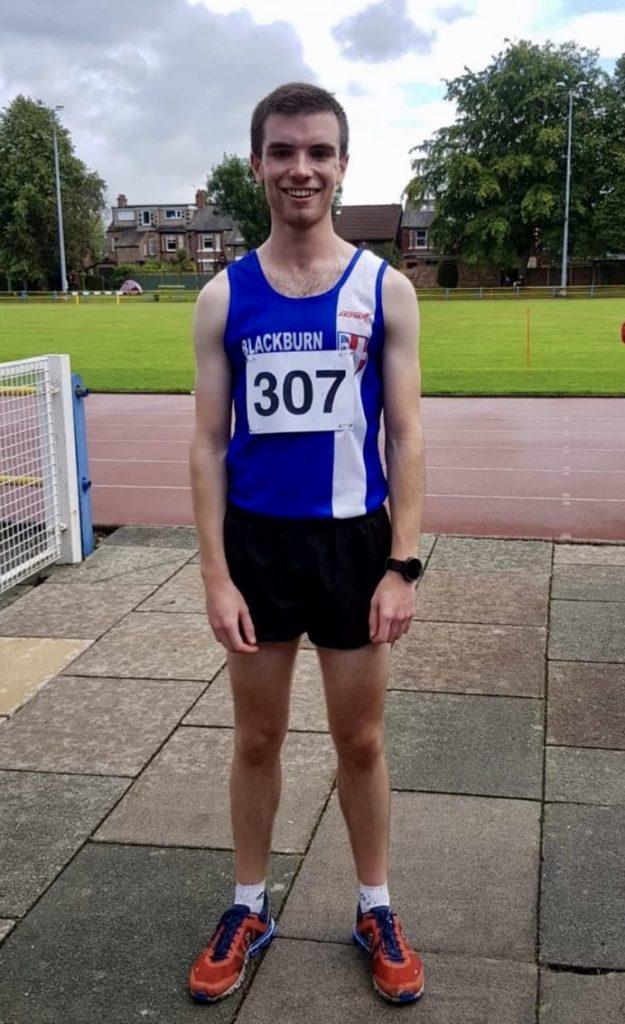 The new personal bests kept coming, the next one posted by another bottom of age U20 – Sam Hodkinson. This was his first track race since June 2019 and went into today’s race with an 800m best of 2.04.89. He improved that by half a second to set a new PB of 2.04.21 telling the Club that “it was good to get racing back on the track today and well done to everyone who ran”. U20 Ben Makin was running only his second ever 1500 – the first in August 2019 when he clocked 4.28.79. Just half a second separated first and second in the 1500m involving 12 athletes which Ben won in a massive new PB time of 4.13.86 – an improvement of some 15 seconds – from Manchester Harrier Archie Dyer in 2nd (4.14.49). Remarkably, all 12 athletes set new personal bests. The biggest new personal best of the day came from first year U20 – Jamie Teare. He last ran in a track race back in May 2019, so this was his first outing since then and he didn’t disappoint, placing 4th with a massive new PB by over 22 seconds of 4.13.30. 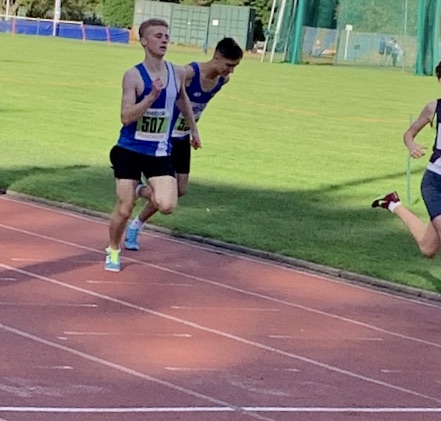 In between track races, there were Throws competitions which saw the Harriers Senior Women’s Team Captain – Anna Peers – contesting Shot Putt and Discus. In the Discus, Anna was seeded in Pool 1 alongside nine men and threw a distance of 35.89m to place 7th in the Pool and 1st Woman in both Pools. The Shot featured two Pools of 12 athletes in each, both featuring Men and Women alongside one another. Anna recorded a throw of 11.13 in 9th spot in Pool 1 and 2nd overall of the 4kg Women Throwers in the two Pools. The weather wasn’t the best for the Throwers as Anna told the Club after “It was a wet competition with heavy rain showing making throwing discus challenging. Pleased with my throw considering the weather and a seasons beat in shot put was good.”

Senior Annabel Ralph was just itching to get into a track race over 3000m – her last run over that distance in a competitive race being back in May 2019 in a Northern League Division 1 Match where she clocked 10.34.50. Her previous best was 10.14.10, so it was an eager athlete who lined up looking to bring that down and break through the 10 minute barrier. This she did and by an impressive 11 seconds as she set a new PB of 9.59.57 in 5th spot, commenting after that she had her “sights set on a sub 10 minute 3000m. I was pretty nervous at the start as I only really had one shot at it, as this would be my first and last track race of the season. Happy I went under 10 minutes, but if I’d have had a full track season would have raced a quicker time by now.“. 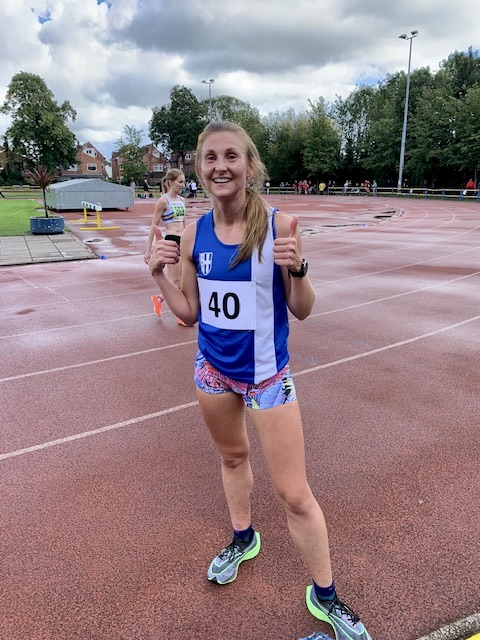 Annabel Ralph
Bottom of age U17 David Holman is having a great end to this truncated Covid season. Today saw him racing for the third time have smashed his 800m and 1500m personal bests already. It was the 1500m today for David as he posted a very good win and another new PB – his third in a row – of 4.28.16 in a tightly fought race in which Vale Royal’s Robert Price took 2nd spot in 4.28.90 and Horwich’s Isaac Battye in 3rd (4.29.16). and in yet another race which produced seven new personal best by the other athletes. First year U17 Abby Stratton, made mincemeant of her personal 1500m best which was 4.51.96 recorded a couple of weeks ago at Trafford. Today Abby cut another 9 seconds off that to set up a new PB of 4.42.55, commenting to the Harriers “I am really pleased with my new pb looking forward to next one”. 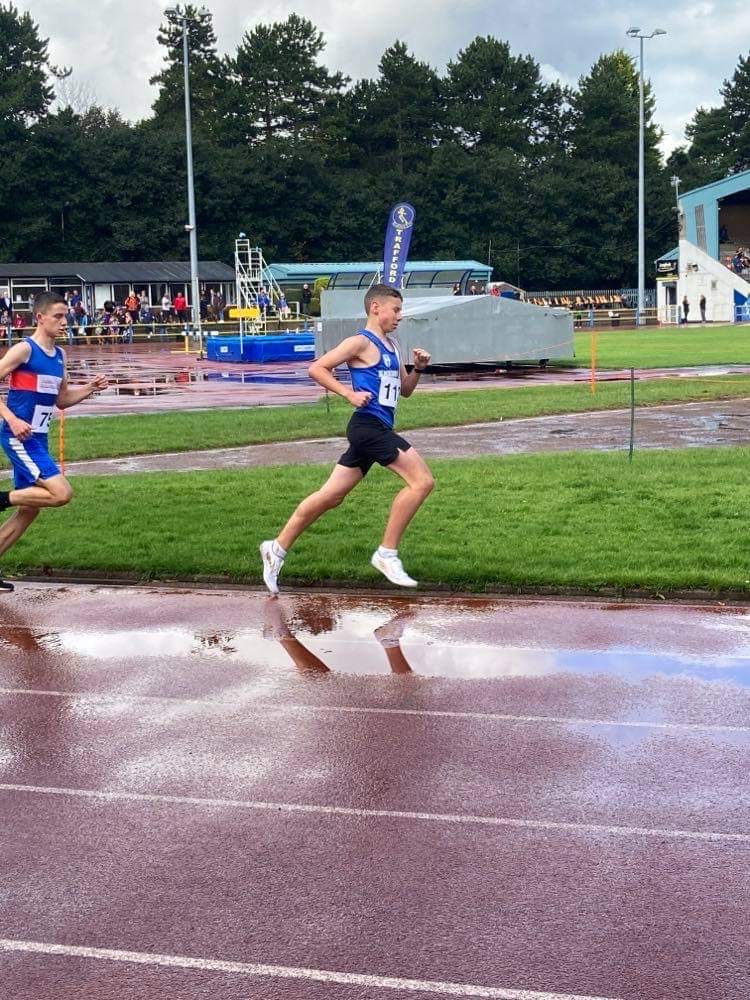 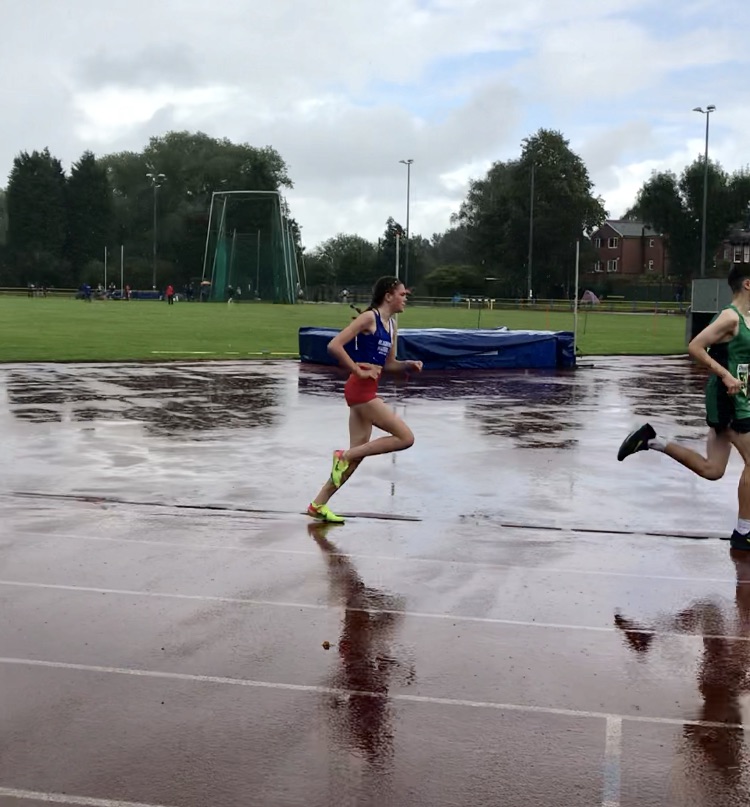 Abby Stratton
In his first year as an U17, Hayden Mercer took on his favoured 800m in another Race featuring nine athletes, producing seven new personal bests. This was Hayden’s second 800m race this year, posting a then new personal best of 2.05.48 at Trafford on August 22nd and today, just two weeks later, he went and set himself another new PB – this time by 2 seconds, clocking 2.03.44 in 5th spot. Post race Hayden told the Harriers that “It was a great day to race because of the conditions and I was determined to get a new pb, knocking two seconds off”. Leah Hoole is in her first year as an U17 and like other athletes, hasn’t had any opportunity to race and has also been hampered by injury, so her appearance on the track was great to see as she ran a time of 2.41.56. 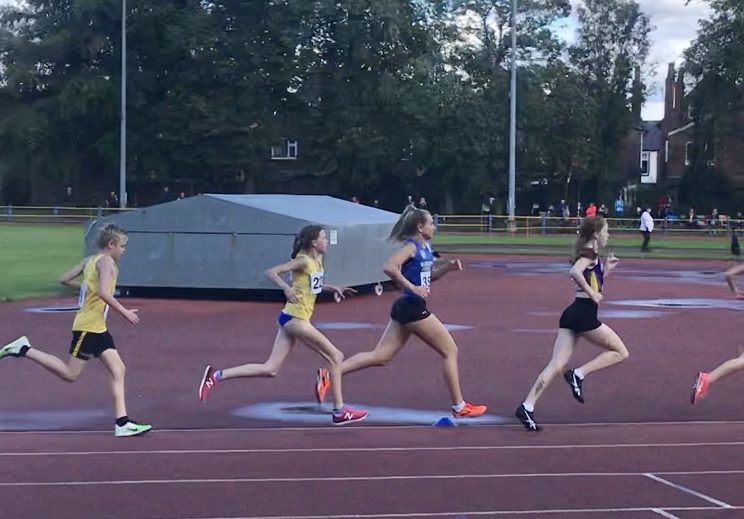 Leah Hoole
In the U15 800m Races Kiera Booth had her first outing of the year and placed a solid 4th in a field of nine athletes, running a time of 2.47.46. Team mate Eva Knowles ran in the next Heat featuring nine athletes again and also placed 4th with a new PB time of 2.41.70 which was a huge improvement of eight seconds. Codie Dewhurst (U15) ran his last 800m race a year ago and went into the race day with a best of 2.29.76 and was delighted to come away with a new PB by half a second, of 2.29.16. U15 Keira Haxton took on the 1500m after running a couple of 800 races in August at Trafford and clocked a time of 5.27.34 to come home in 6th place. 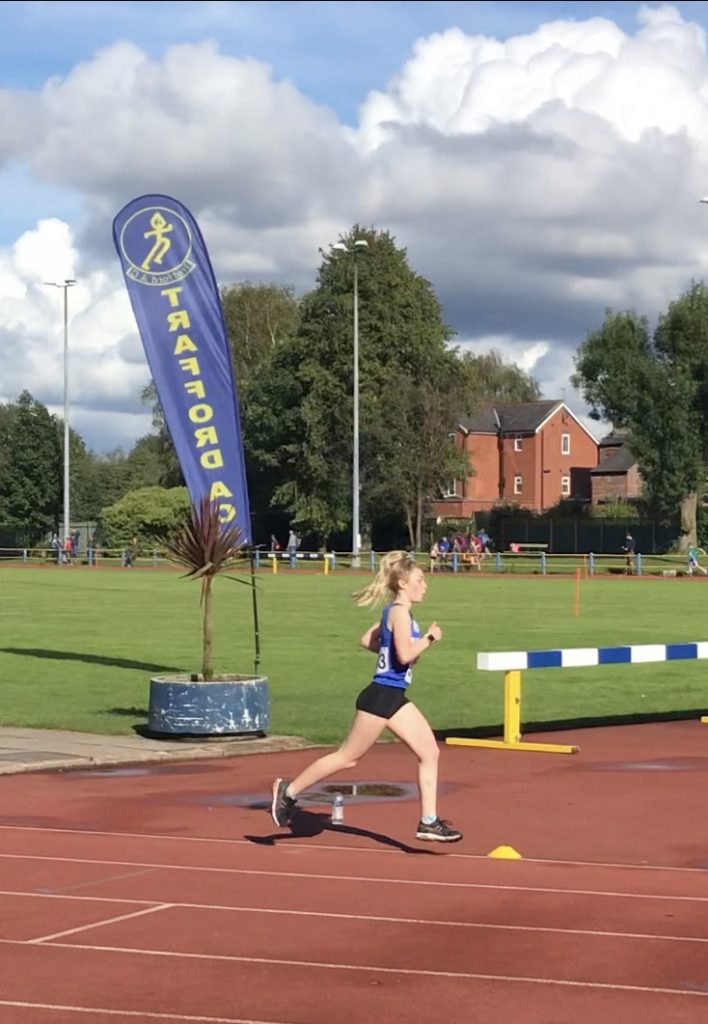 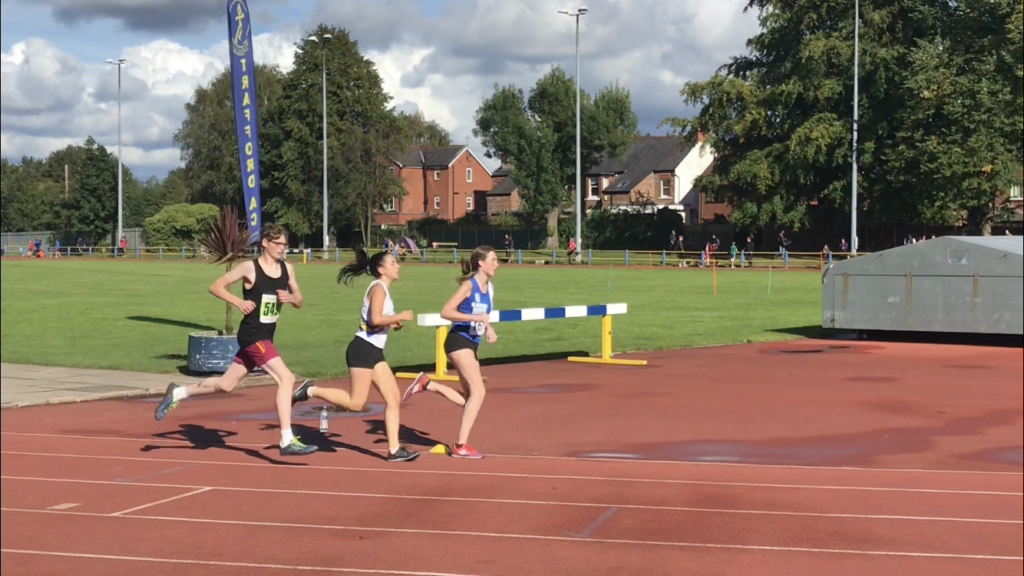 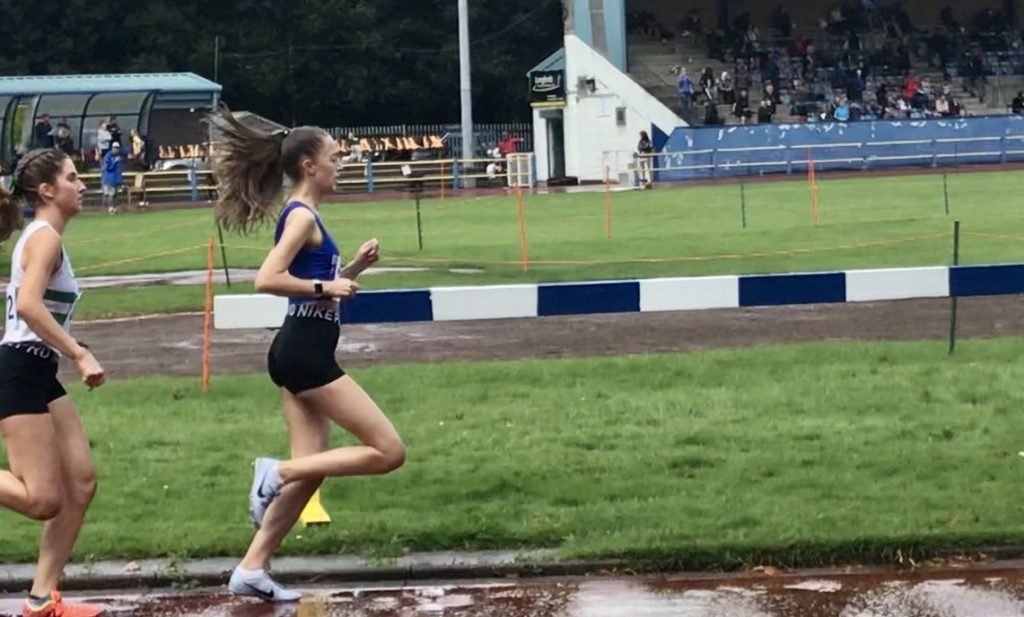 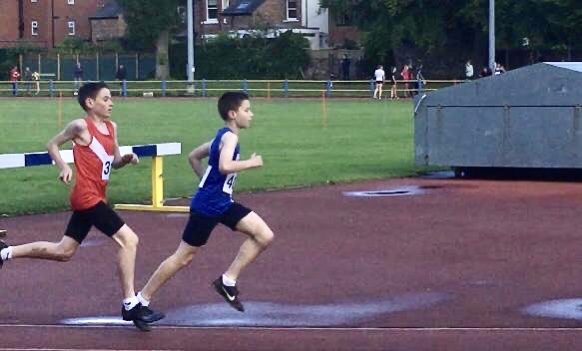 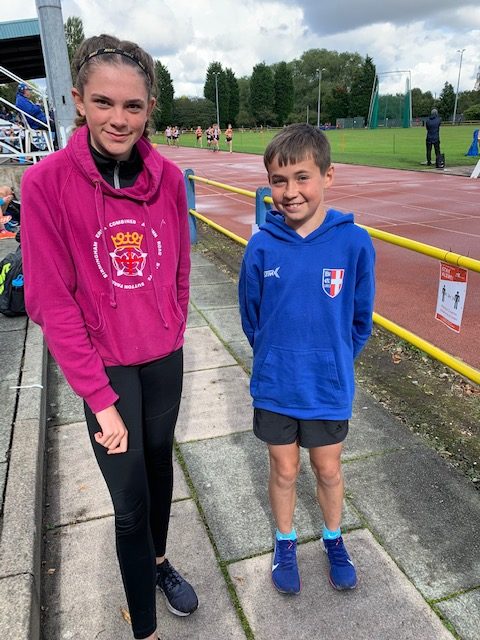 This is one tough race and attracts the best athletes around, none more so that the likes of Alistair Brownlee, Joe Skipper, Nikki Bartlett, Lucy Gossage and many more. Blackburn Harriers Jack Hindle lined up in this one in the Pro-Start for the first time – the race consiting of a 1.6k Swim in Lake Ullswater, a 61.2k Bike Ride over Kirkstone Pass with 20% ascents and a 14.5k run up and down Helvellyn with a near 3000ft of elevation gain!!

Jack had an incredible race,which was won by Olympic Champion – Alistair Brownlee in a new Course Record time of 3hrs 16.28. In his first ever Pro Start, Jack finished 5th overall in the race ahead of the likes of Joe Skipper, posting 23.06 for the Swim, 1hr 42.03 for the Bike and 1hr 25.33 for the Run. 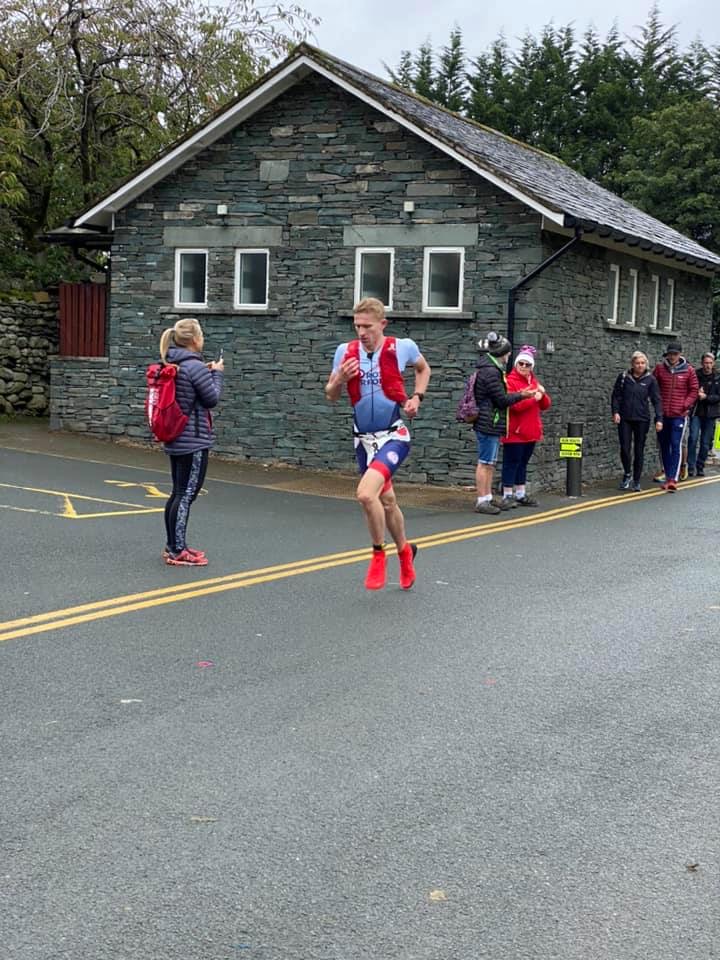 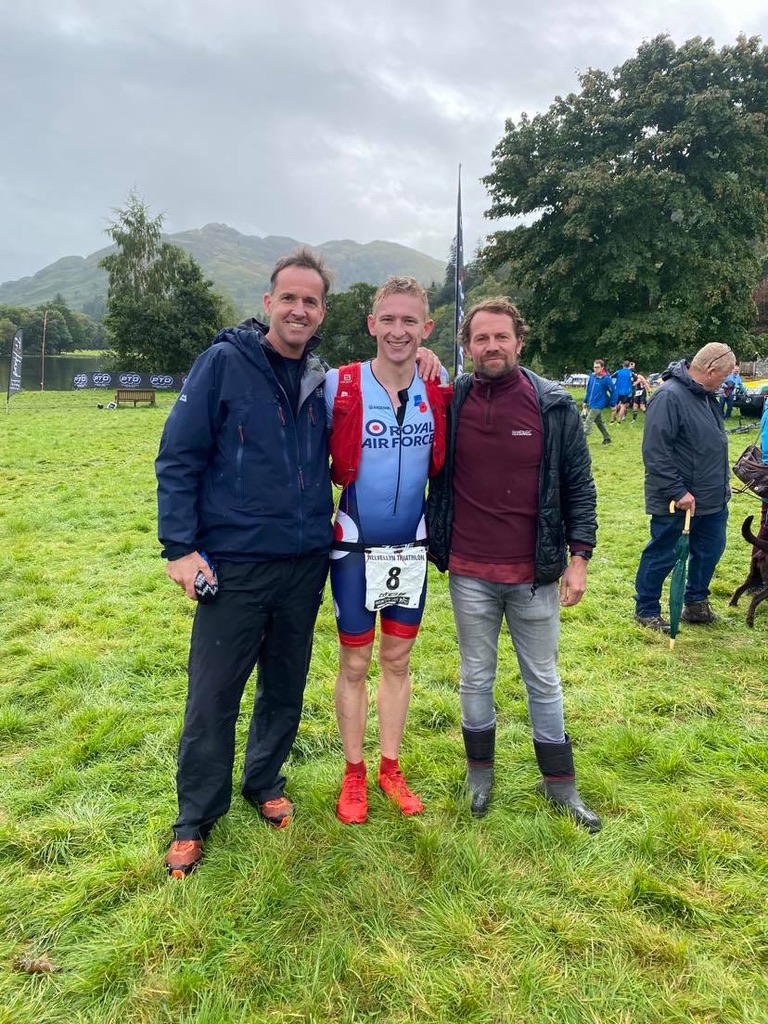 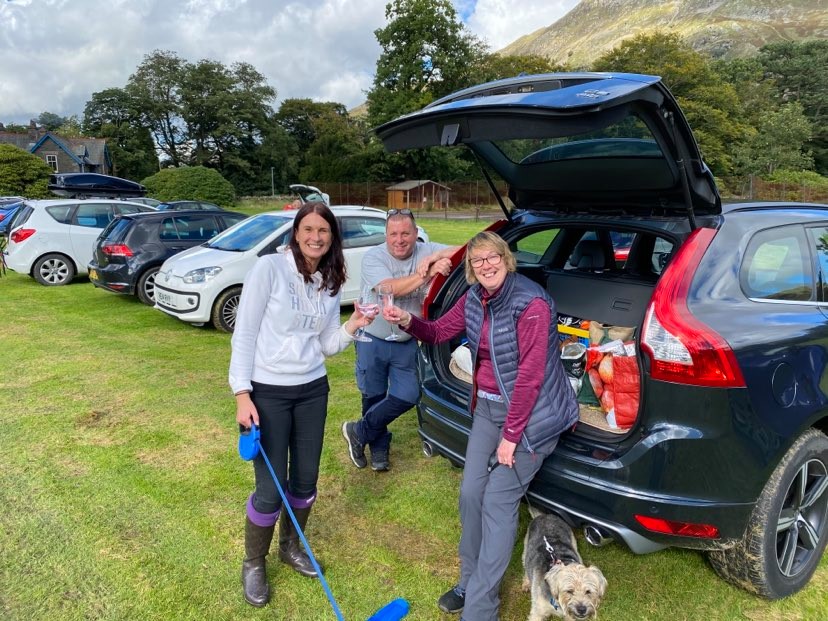 On the same weekend, Keith Gill and son Oliver Gill, one of the stalwarts of the Harriers U13’s Team, were out in the Lake District competing in the Derwentater Sport Trail 5k. Sixty one runners took part in this race, won by Lancasters James Brassington in a time of 20.37. Oliver took bragging rights with a 5th placed finish of 23.30 with dad – V50 Keith in 9th spot with a time of 25.05. Keith summed up the day by telling us that “It was great to be back wearing a race number again. Lakeland Trials showed that it is possible to organise a large scale event in a “Covid Secure” environment. 650 athletes taking part in events from 5k to 15k. Chip timed, released in waves of 6 every minute and hand sanitiser and face masks at start and finish were the main differences. Really enjoyed ourselves and the 2 weeks training in the Lakes were worthwhile as the course was very steep and muddy. Both in the top 10 was a great result.” 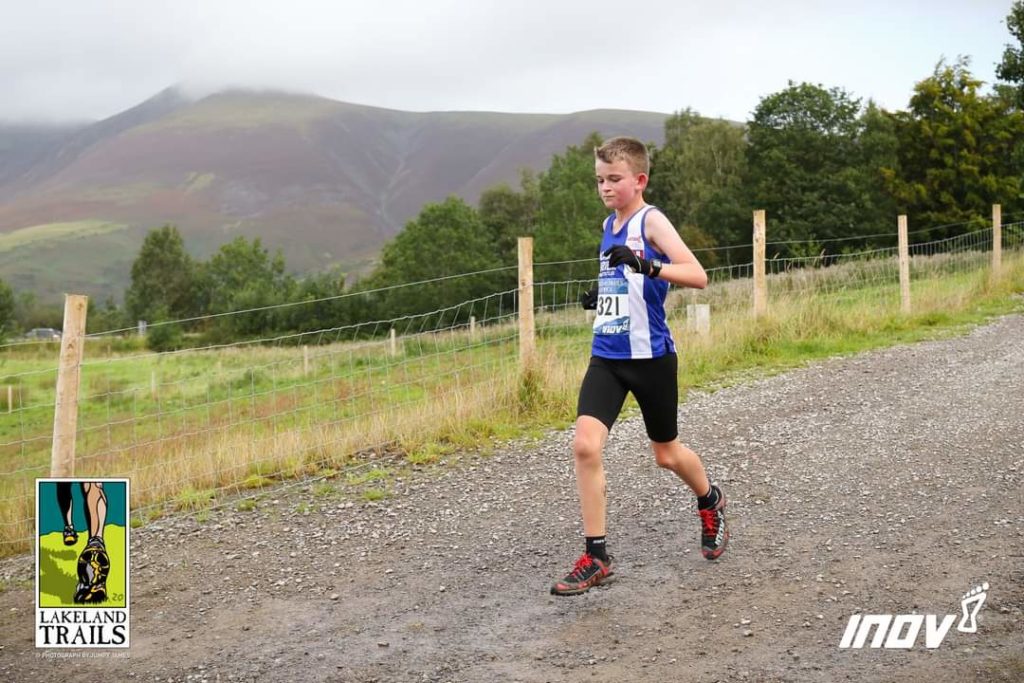 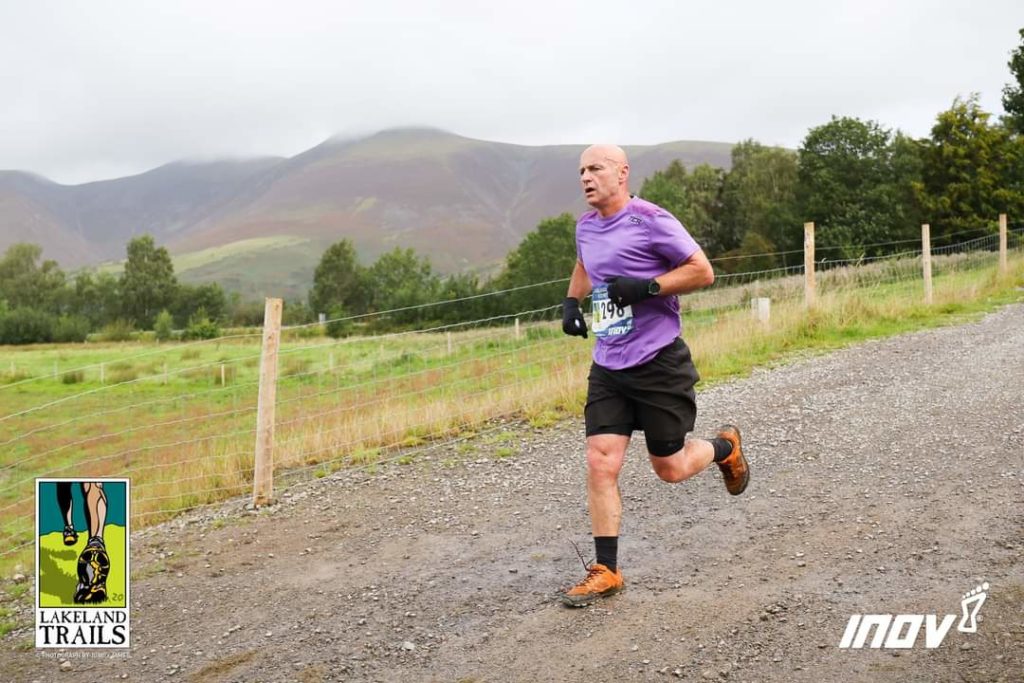 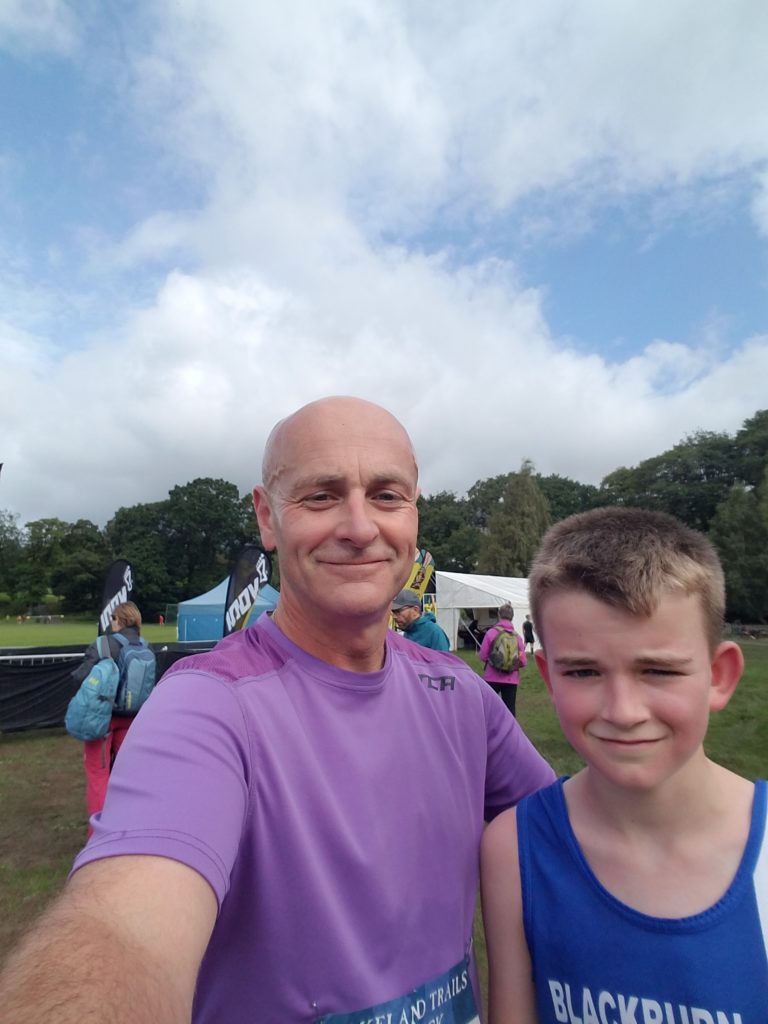