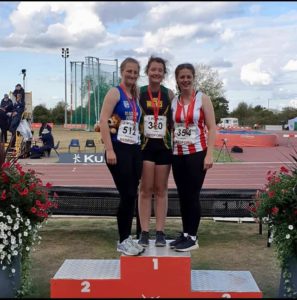 What a great weekend for U15 Nicky Saunders. On Saturday she contested the Hammer where she finished 10th in the Final with a distance of 30.02m and then on Sunday she took on the Discus with a fabulous performance. Her distance of 35.12m was a new PB, a new Club Record and moves her to No.3 in the National Rankings.

Jayden Riley also had a very impressive weekend at the Championships in the U15 Boys 100m. he ran 11.37 in the Heats to qualify for the semi-final where he clocked a new PB of 11.27 which saw him into the Final coming home in 7th place with a time of 11.40. This is the first time that Jayden has done 3 rounds in one day and was an excellent performance which saw him finish the Championships ranked 8th nationally in the 100m and 14th in the 80m Hurdles, and afterwards he spoke to the Harriers about the weekend saying “This season has been great and I have been able to achieve so much. I have also had so many amazing experiences, my most recent one being the Nationals where I was proud and very pleased to make the finals and run a personal best.  I look forward to next season”.

What a way to end a holiday! Coming straight from holiday on the way home –  Millie Coy – this years Northern Athletics Gold Medalist at Liverpool – qualified for the Final, making it a hat-trick of new PB’s for Harriers athletes at the Championships in the U17 Women’s Javelin, as she placed 8th with a new PB of 38.76m

U17 Matthew Heywood was in his favourite event at the Championships – the Hammer. In the Final Matthew finished in 7th place with a throw of 51.13m which was a very good performance when considering that he was one of only two first year U17’s in the Final, all the others being top of age. Matthew finishes the season placed 8th in the National Rankings and there is little doubt that there is more to come from this young athlete next year.

Rob Warner is finishing off his season in real style. He has already broken his personal best for 5000m with his clocking off 14.08.45 and recently ran 3.48.71 for the 1500m and on Saturday at the Tonbridge Twilight Meeting Rob ran the 3000m which was won in a time of 8.07.59 by Kieran Clements. Rob knocked close to two seconds off his previous best to set new PB of 8.14.92. Rob spoke to the Club after his race commenting that he was “Happy with the race, felt really good after not being well the week before so was good to come back and finish off the track season well! Looking back I felt I could have kicked on a bit with 3 laps to go but I had it in the back of my mind that i went too hard too early in a 3k earlier in the year so hung back a bit. Happy with a PB at the end of the day though!“

The build up to the World T&F Championships is going really well for Holly Bradshaw. Last week she won the British Championships with a vault of 4.73m which was a seasons best and a new Championship Record and this week she followed that up with a 4.72m clearance in the Diamond League in 5th place, an event featuring many of the top pole vaulters in the world.

Joanne had a stormer knocking five minutes off the time she ran last year to come home 1st Woman and 1st V45 in 25th position overall………….“After completing the South Cheshire 20 mile in 2018 and enjoying it so much, I decided to run it this year in preparation for Amsterdam marathon. As Charlotte is also running Amsterdam marathon I managed to convince her that the South Cheshire 20 was a good idea. The course is undulating and so rather challenging in parts. There are plenty of Marshalls en- route; all shouting words of encouragement. I was pleased with my win; although I had to work hard over the last 6 miles to catch the girl who was leading. My time in 2 hrs 16 was an improvement of 5 mins from the previous year. Charlotte has a fantastic run, especially as she has just returned from a week holiday in Ibiza!!! She smashed her first 20 mile race in just over 3 hours; so it’s looking all Rosie for the Harriers in Amsterdam!” As mentioned – well done too for Charlotte Atkinson who was having her first shot at a 20 mile race and ran really well to come home in 125th place clocking 3hr 05.56 as she builds up her training for the Amsterdam Marathon. Afterwards Charlotte told the Harriers about the Race saying “It was a tough hilly course but glad to have a 20 mile race under my belt in preparation for Amsterdam marathon in October and was great to see Joanne get the win!“

Just short of two and half thousand runners turned up for this annual race held in Wigan, won by Sales’s Philip Robertson is a time of 30.44 – just five seconds in front of second place Southport athlete – Ben Johnson (30.49).

Jacob Watson went into the race with a personal best of 33.08 and finished 4th smashing his best time by 29 seconds to set a new PB of 32.39, telling the Club after the race that he was “4th again at the Wigan 10k, albeit a minute quicker than last year. Really happy to set a new PB and even happier to finally run under 33 minutes!“

Just over six hundred runners completed this race win by Liverpool’s Charlie Hulson in 14.21 with the first fifteeen athletes all getting in under the 15 minute mark. Ben Costello came home in 34th position clocking a new PB time of 15.29.

Theo Robinson took advantage of the very warm Bank Holiday weather along what his sister Imogen, to take part in this meeting. Theo ran the 75m, to come home 4th with a time of 12.33 and then just missed a new personal best in the U11’s 600m as he clocked 1.59.73 in 5th place. Sister Imogen was also just a second outside her personal best in the U13 Girls 800m running a time of 2.47.52 in 2nd spot followed by a new PB in the High Jump, clearing 1.25m an improvement of 5cms in 4th spot. 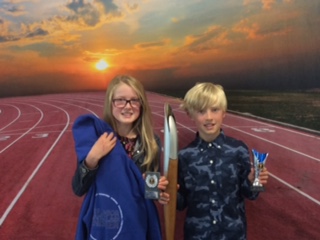 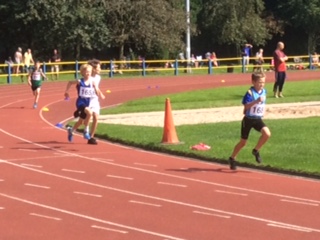 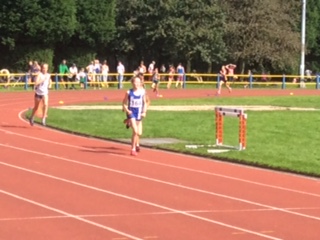 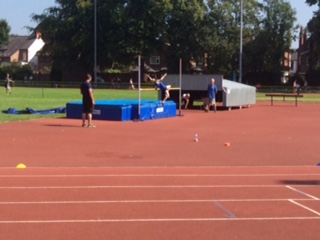 Daniel Nuttall had a very good day as he set a new PB in winning the U13 Boys 100m when he clocked 13.76 , his previous best being 13.9 run at the Mid Lancs Medal Meeting last weekend. Daniel went and made it a double new PB as he cut half a second off his previous best time in the 200m – running 29.77 in 4th place. Then in the High Jump, he had a clearance of 1.30m in his first ever competitive attempt at the discipline, placing 4th overall. 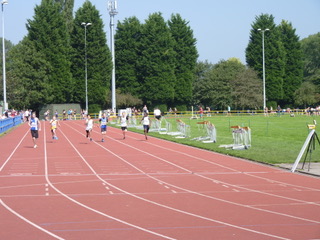 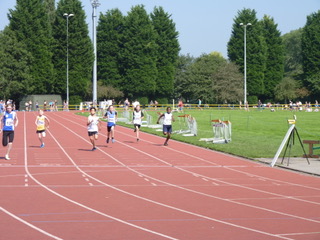 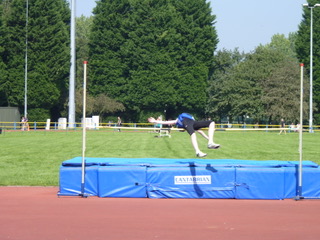 U13 Lucy Rishton came home 3rd in the U13 Girls 75m running 11.70 before going onto set a new PB in the Long Jump, leaping out to a distance of 4.09m in 6th place out of the event featuring eighteen other youngsters. Niamh Gater was in the same event and just missed a new personal best as she jumped a seasons best 3.80m in 8th spot and this, after clocking 13.29 (4th) in the 70m Hurdles Race.

Just over 200 runners in this, the final race of this years Series with the Race being won by St Helens athlete Jon-Jo Doherty in a swift time of 31.55.

Blackburn Harriers – Annabel Ralph – in her 2nd race back after injury took the Women’s 1st place with a time of 40.35, crossing the finish line in 32nd spot.

There was a run away winner by over five minutes in this race as Joe Beech from Brackla Harriers won in a time of 32.28 with 2nd placed runner – Thomas Haworth of Lytham – clocking 37.42.

John Orrell was back out on the Fells for his third race in as many days – finishing 83rd in a time of 53.59 – describing himself ‘Proper jiggered now and that’s why I needed cake!’  and after this race he told the Club about his exploits commenting that this was his “Third race in 3 days. 3 counties, 2 shows. Like the others temperatures got up to 26 degrees. A steady start out of the main show ring, across fields to the fell, then up. Up and up to Stile End summit, off the top to Barrow Door then a runnable climb to Barrow summit. Picked up 2 places before the long descent back to the finish. Exhausted!“

Harriers run the lights in the Blackpool Night Run 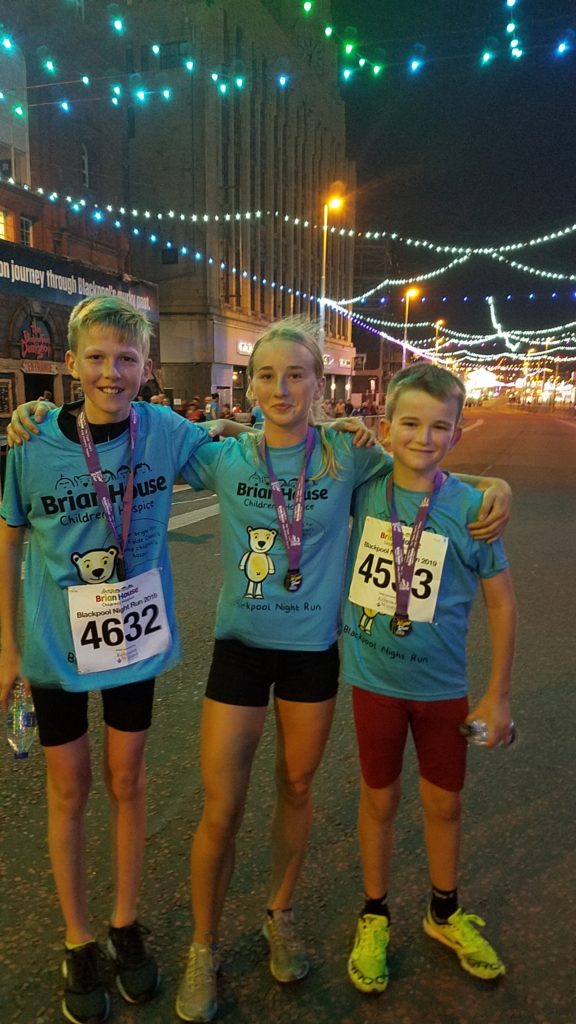 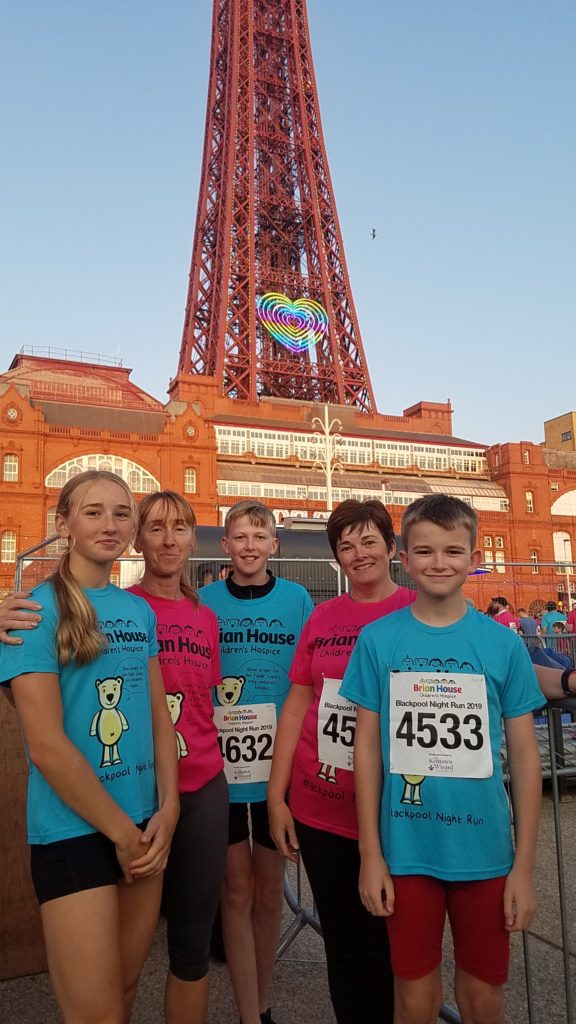