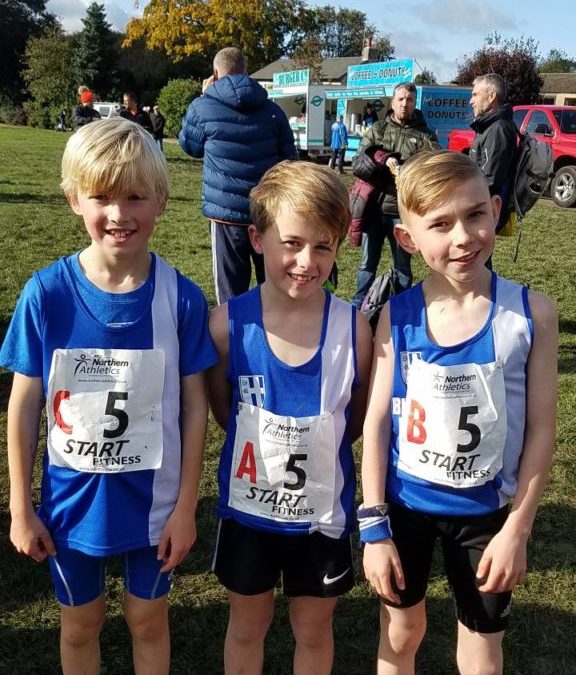 It was a trip over the Pennines for the Harriers this weekend with U11, U13, U15 and U17 Teams entered for this years Northern Athletics Cross Country Relay Championships held at Graces Park, Sheffield.

The U11 Boys race featured 27 full teams and was won by Hallamshire Harriers in a combined time for the three Legs of 15.28. Blackburn Harriers U11 Team had an excellent run finishing in 8th position overall with a time of 16.42. Charlie Haworth led off on Leg 1 coming home in 20th spot with a time of 5.51. Sam Aspey then ran the fastest Leg clocking 5.25 to pull back seven places, handing over to Theo Robinson on the Final Leg who was just one second slower (5.26) – pulling back another five places to round off a very good day for the team. 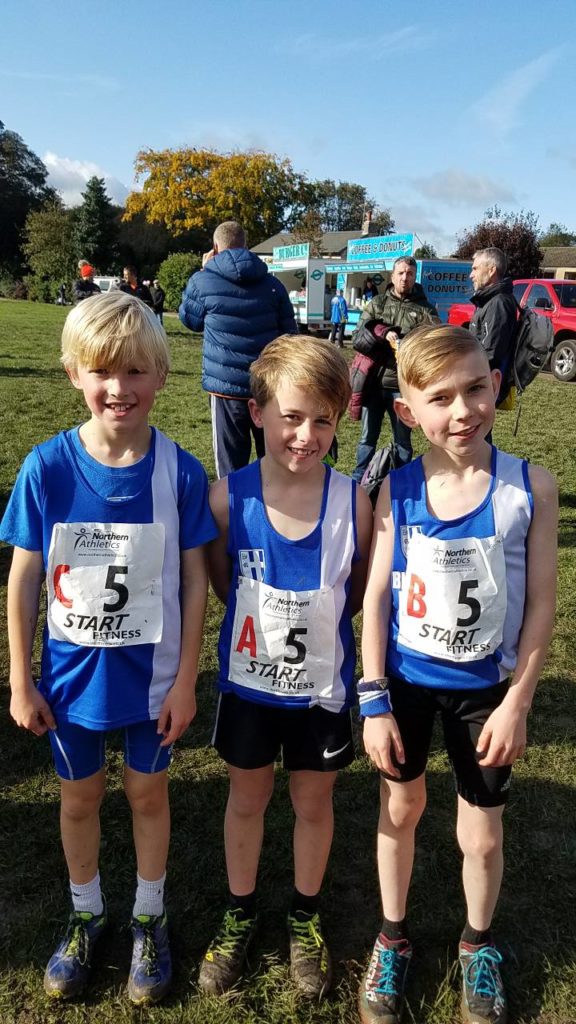 41 Teams contested the U13 Boys Race won by Sale Harriers with their combined time of 17.15. The Harriers ‘A’ team came in 23rd (19.22) with Ben Livesey running the fastest time on Leg 1 of 6.18, passing on to Oliver Gill on Leg 2 in 28th spot. Ben picked up another place to finish in 27th with a time of 6.26, handing over to Matthew Smith on Leg 3 who picked up four more places with his time of 6.38. The ‘B’ Team came home in 32nd position as Findlay Carroll led them off on the first Leg (7.01) in 43rd, with George Ramsden running 6.56 on Leg 2 and pulling back 5 places before handing on to Harry Sambrook on the last Leg who ran the fastest time of 6.52 and also picked up another 5 places along the way. 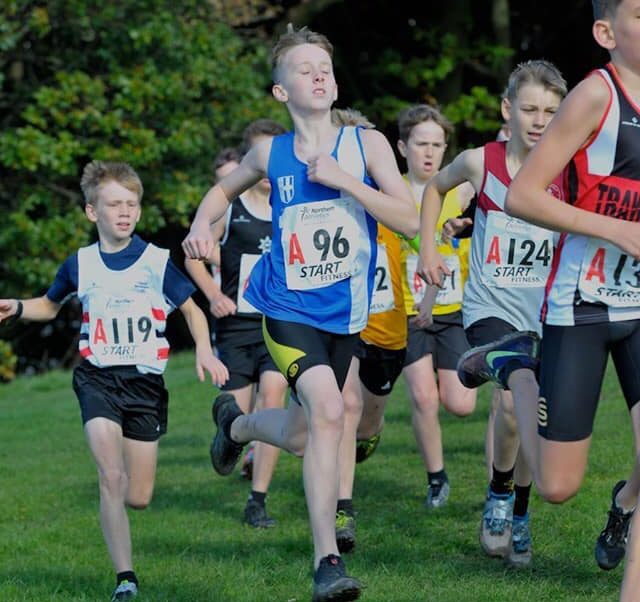 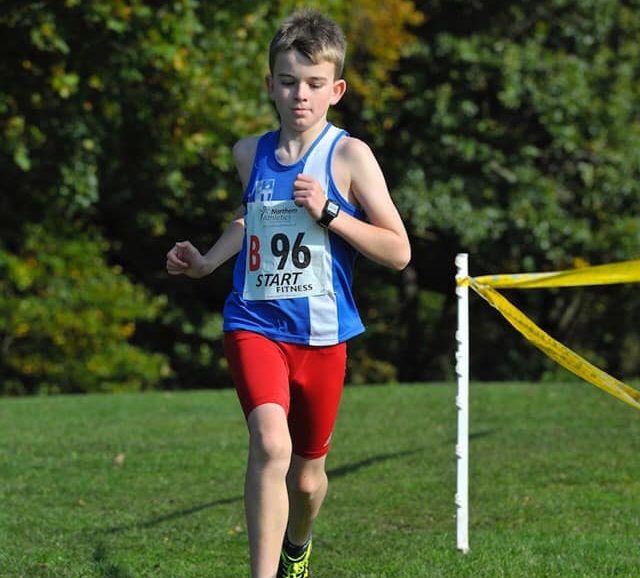 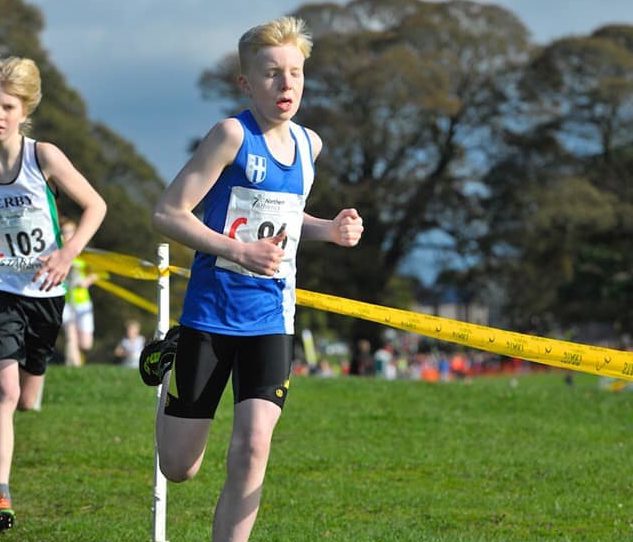 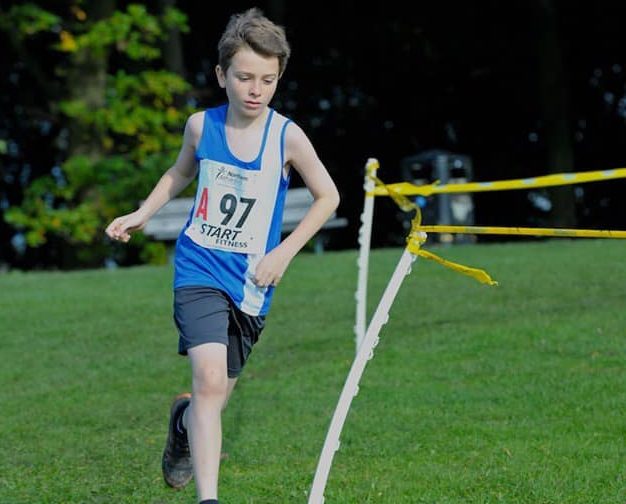 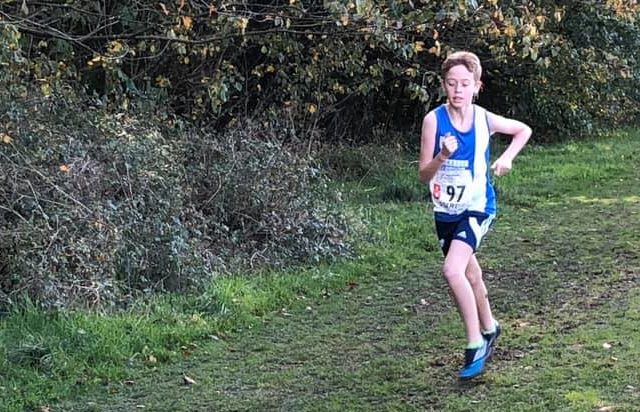 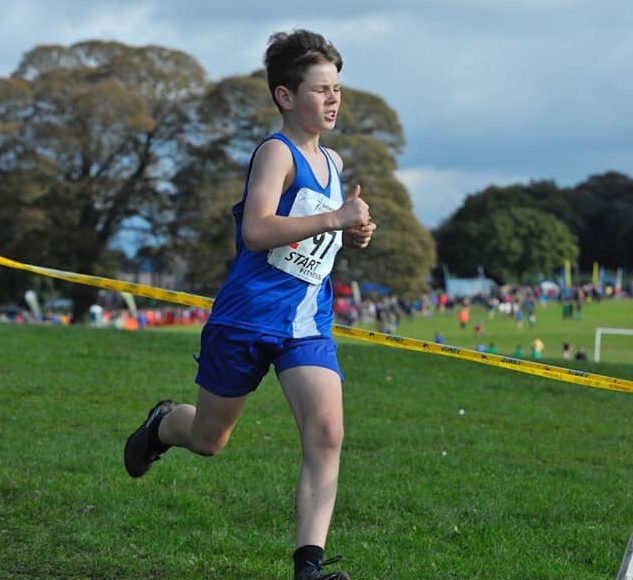 The U13 Girls Team were one of 46 teams competing in that age group which was ultimately won by Stockport Harriers with a combined time of 18.13. Faith Gillibrand ran the fastest time for the team on Leg 1 coming home in 32nd place with a time of 6.50. Imogen Robinson pulled back another two places on Leg to finish 30th (7.14) before Amelia Burton ran 7.07 on the final leg to maintain that place. 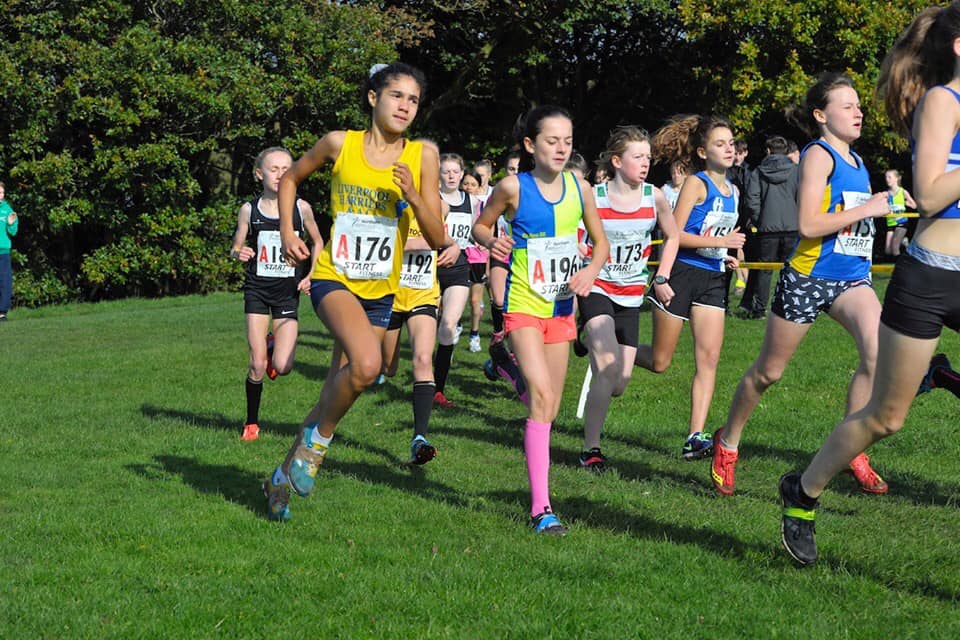 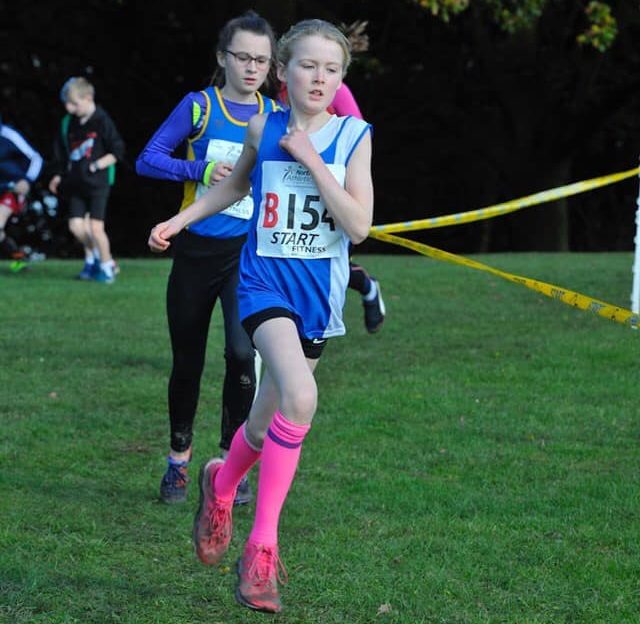 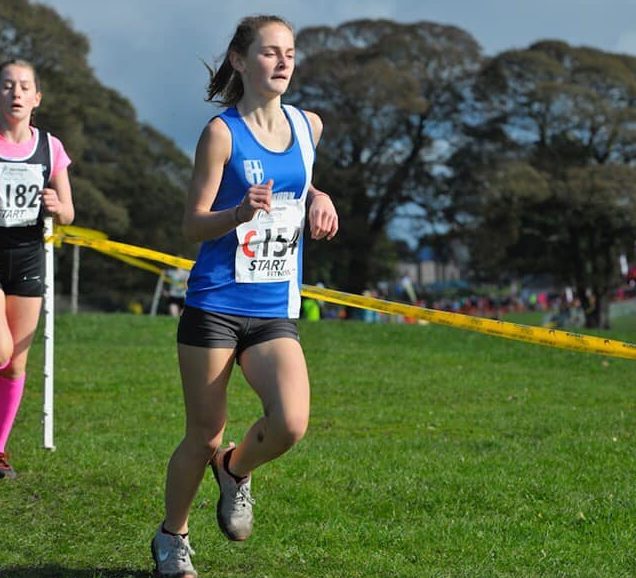 Thirty two teams in the U15 Boys race won by Wirral AC in a time of 21.41 with the Harriers ‘A’ Team coming home in 15th spot. Dexta Thompson led off for the team on Leg 1 running the fastest Leg of 7.42 to hand over to Kyle Taylor-Pomfret who pulled back five places with his run of 7.59 before Hayden Mercer clocked 8.12 on the final Leg to keep the team in 15th. Sebastian Burton ran the fastest Leg as he led off the ‘B’ team clocking 8.06 in 32nd spot. Umair Rafiq ran a time of 8.56 on Leg 2 to pick up 4 places before handing over to Jack Paget-Fowler on Leg 3 who ran 8.45 and pulled back another 3 places to see the team in 25th position overall. 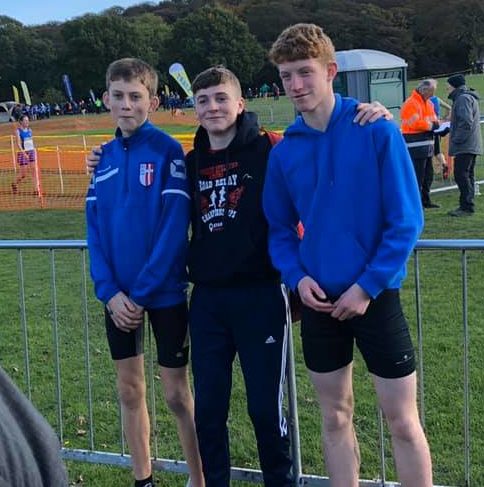 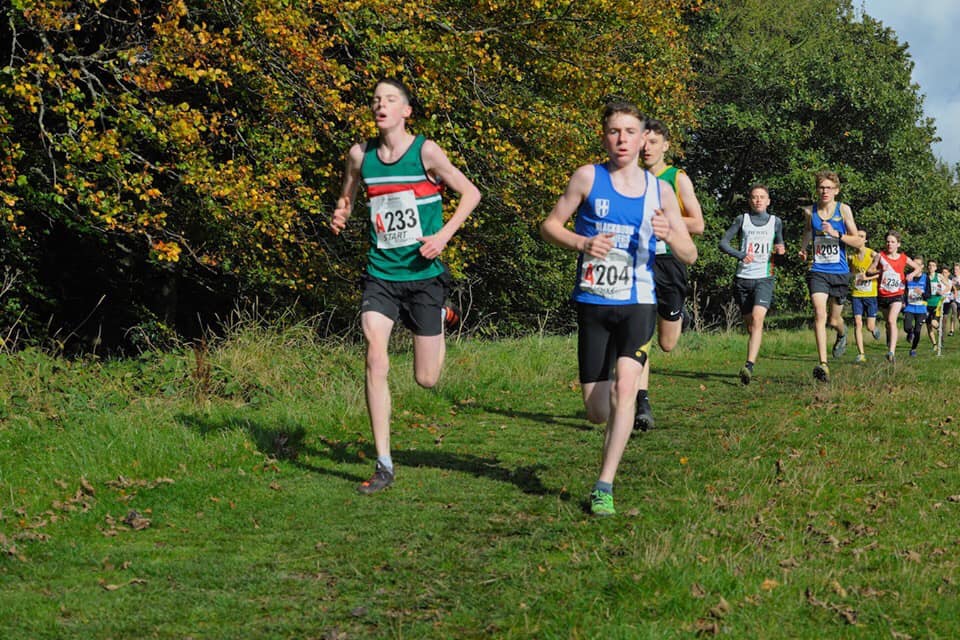 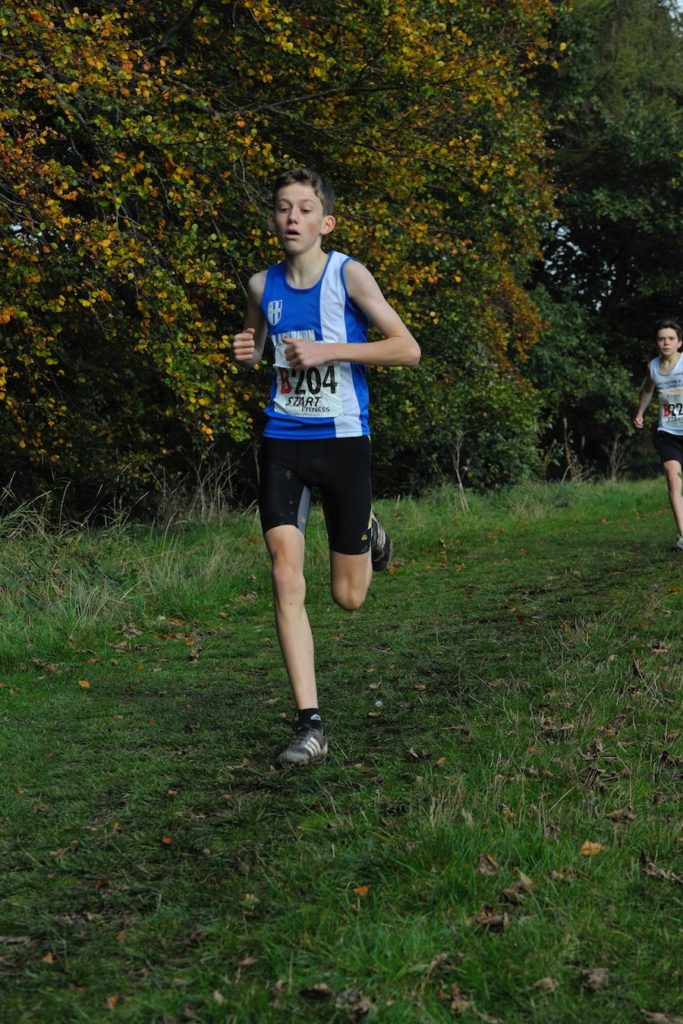 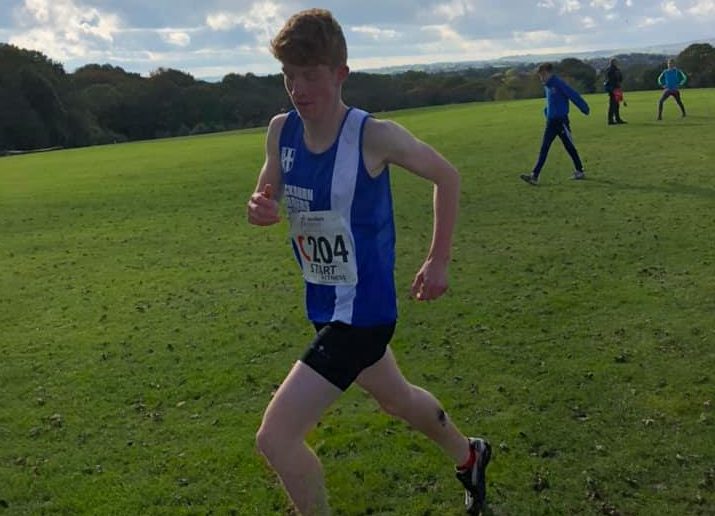 Hallamshire had their second win of the day in the U15 Girls Race with a first placed combined time of 24.10. The Harriers finished in 28th place with Kate Cookson running the fastest time for the team of 8.49 as she handed over to Kiera Booth in 29th. Kiera ran a time of 9.21 to pick up one place with Caroline Woodworth clocking 9.28 on the final Leg to keep the team in that position. 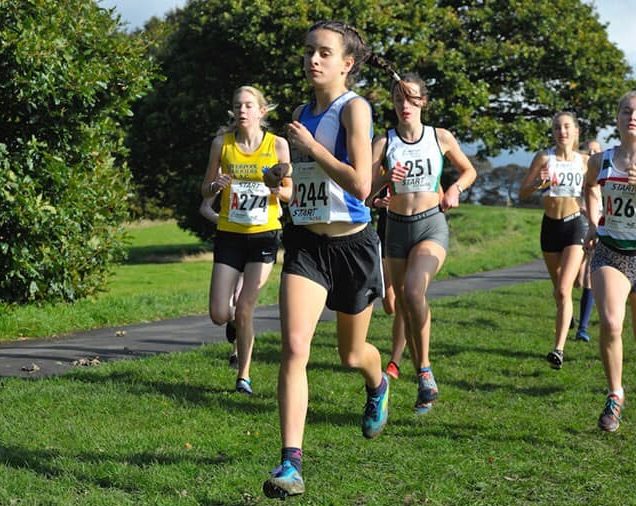 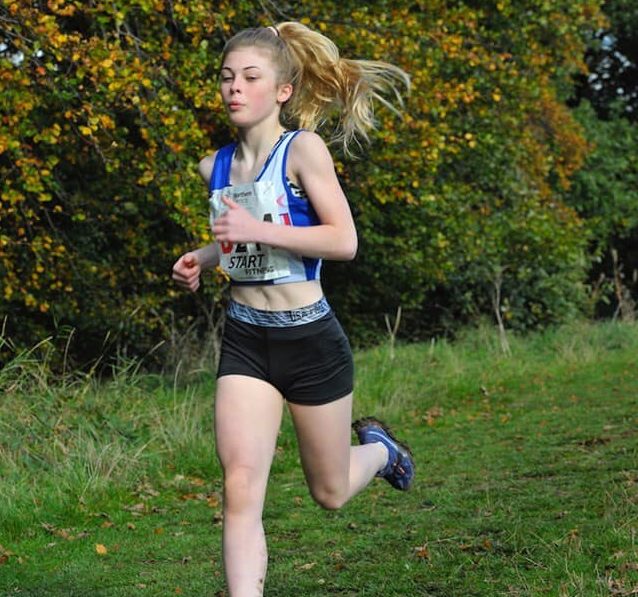 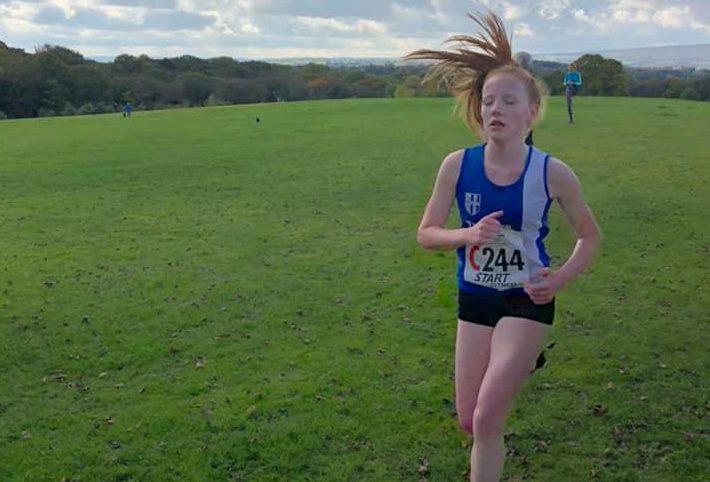 A much smaller field of 16 teams contested the U17 Women’s race won by Salford in a time of 26.42. The Harriers team placed 10th over all and was led off by Amy Davies who ran the teams fastest Leg of 9.12 to come across the line in 10th as Eleesha Charnley ran 9.47 on Leg 2 to hand over to Rebecca Ramsden on Leg 3 in 11th. Rebecca picked up another spot to maintain that 10th position as she ran 10.29. 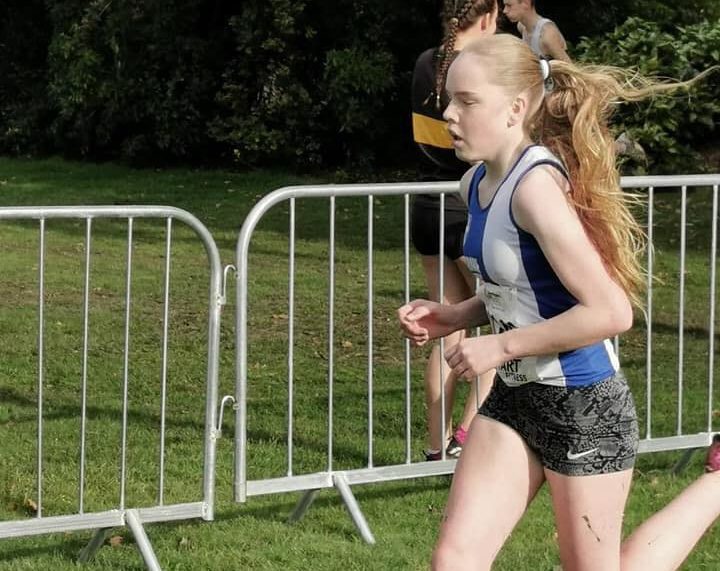 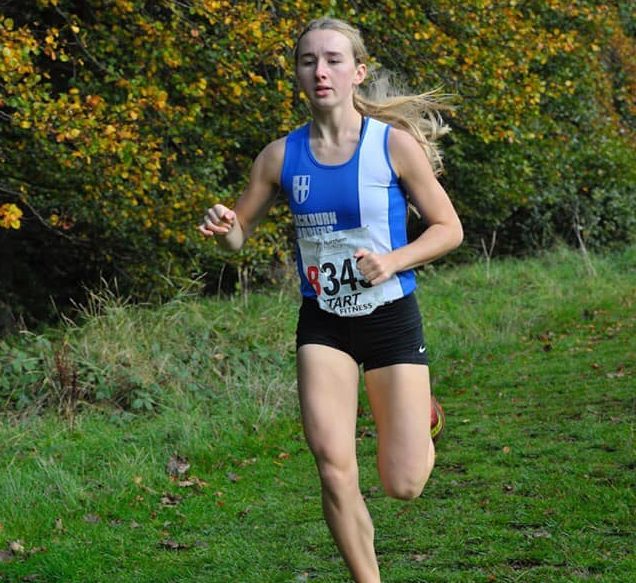 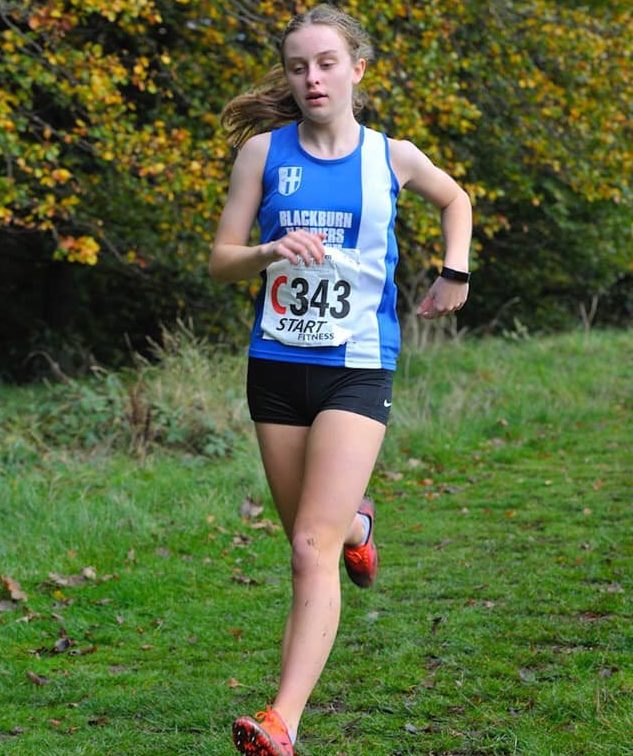 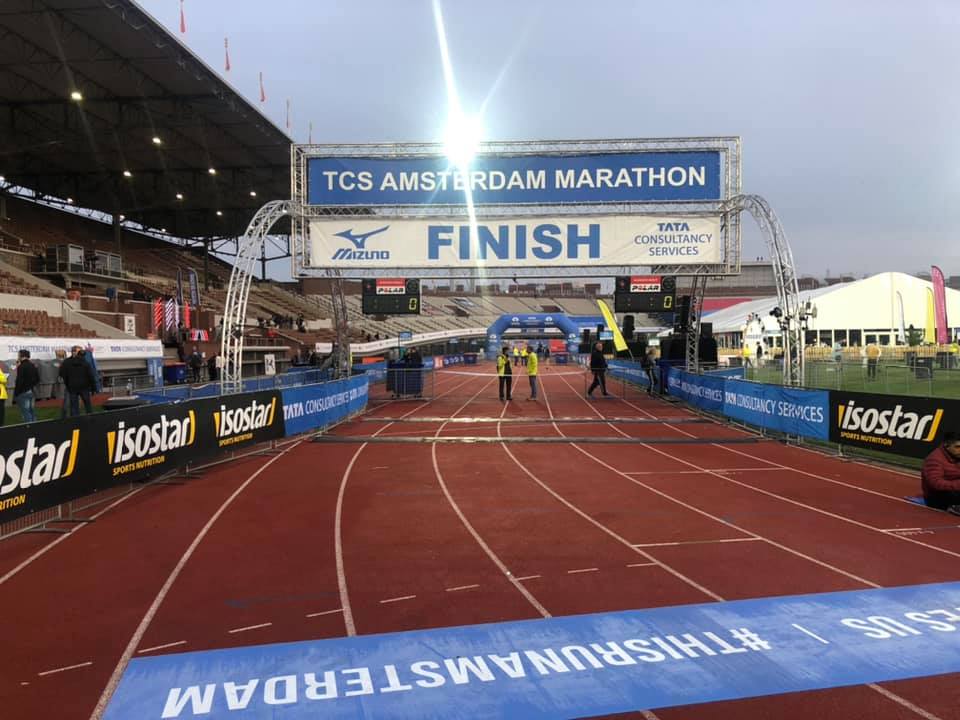 Joanne Nelson who had been carrying an in jury in the build up to the race said she had an “Horrendous start. Took me 4 1/2 mins to get over the line then a stop mid first mile due to congestion meant a 8mins 15 miler ( I go faster than that in warm up!) Was chasing after 4 1/2 miles because the road was too narrow so I was pushing folk out the way. It was really tough and the wheels fell off after 20 miles”. They may well have fallen off but Joanne still managed to run a fine time of 3hr 03.13 and took the honour of being the first Blackburn Harrier home.

Paul Bradshaw went into this, his third marathon with a personal best of 3 hr 12.51 and with just three long runs under his belt knocked a massive 9 minutes off that time to set up a new PB of 3.03.54. After even paced running from the off through to the 22 mile mark, where he was knocking out average 6.50 minute miles, he slipped back from that in the last four miles.

Janine Fallon’s personal best was 3hr 24.17 set in 2013 in the Chester Marathon. She had run 3hr 40.38 at the Liverpool Rock ‘n’ Roll Marathon but suffered from the marathoners curse, having got ill in the week leading up to this Race but still managed to run a good time of 3hr 42.07.

Charlotte Atkinson had a great run as she set herself a new PB by chopping 15 minutes off her previous best to finish in a time of 3hr 47.39 and commented that “it was tough out there very crowded had to walk in parts but managed to get a pb! Joanne and Janine has amazing runs!! We went straight for a drink after”. 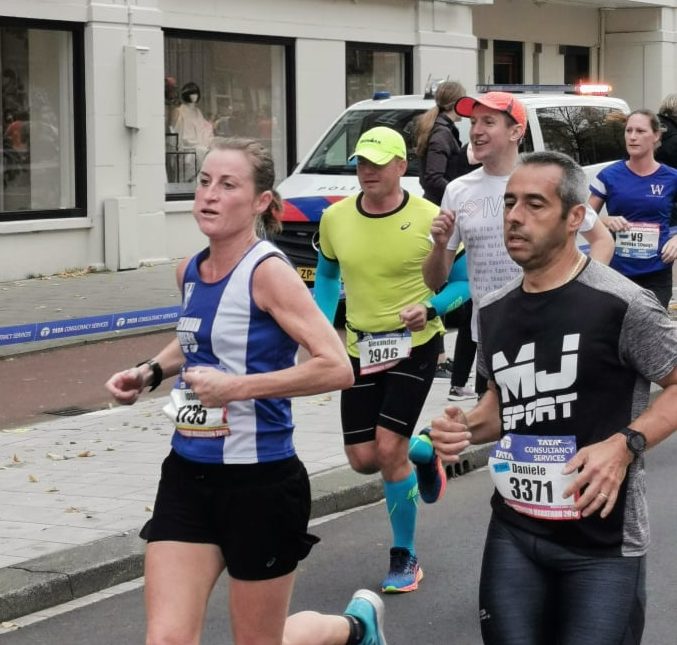 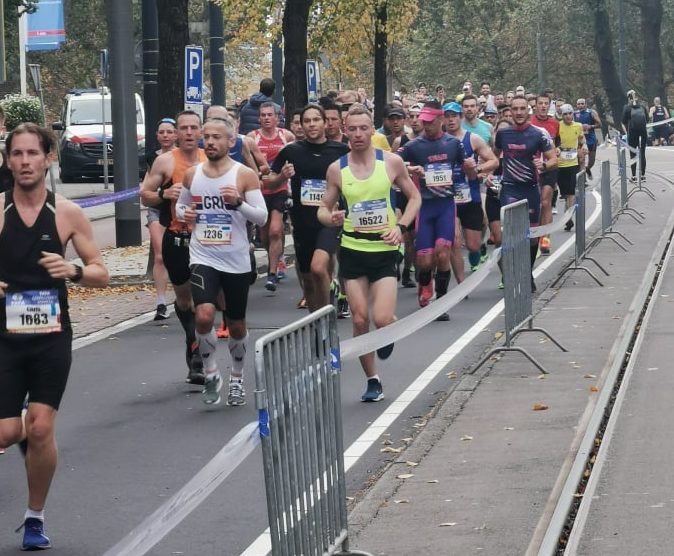 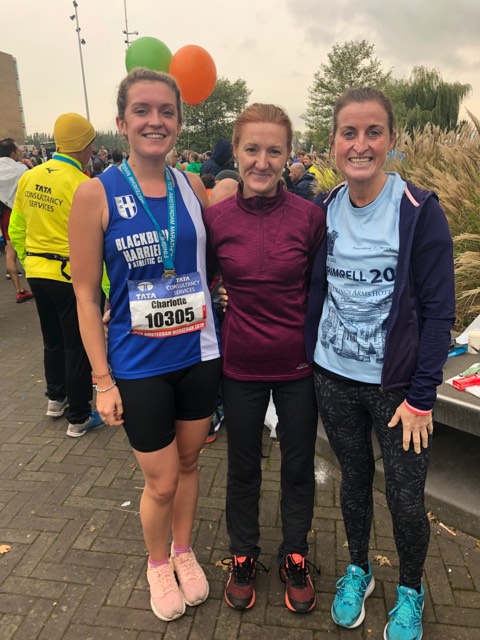 This race incoroprates the Lancashire Athletics 5 Mile Road Championships and it was keenly fought out at the front with just eleven seconds separating the first three in – Andy Benson (24.36), Karl Darcy (24.41) and Gary Priestley (24.47) and Laura Hesketh winning the Women’s race (28.15).

John Horrocks and Rachael Gavin ran for Blackburn Harriers which saw John – running the distance for the first time – come across the finishing line in 13th place clocking 28.25 with Rachael in 57th spot overall in a time of 33.47 which is over a minute faster than her last race over the distance at Preston in August.