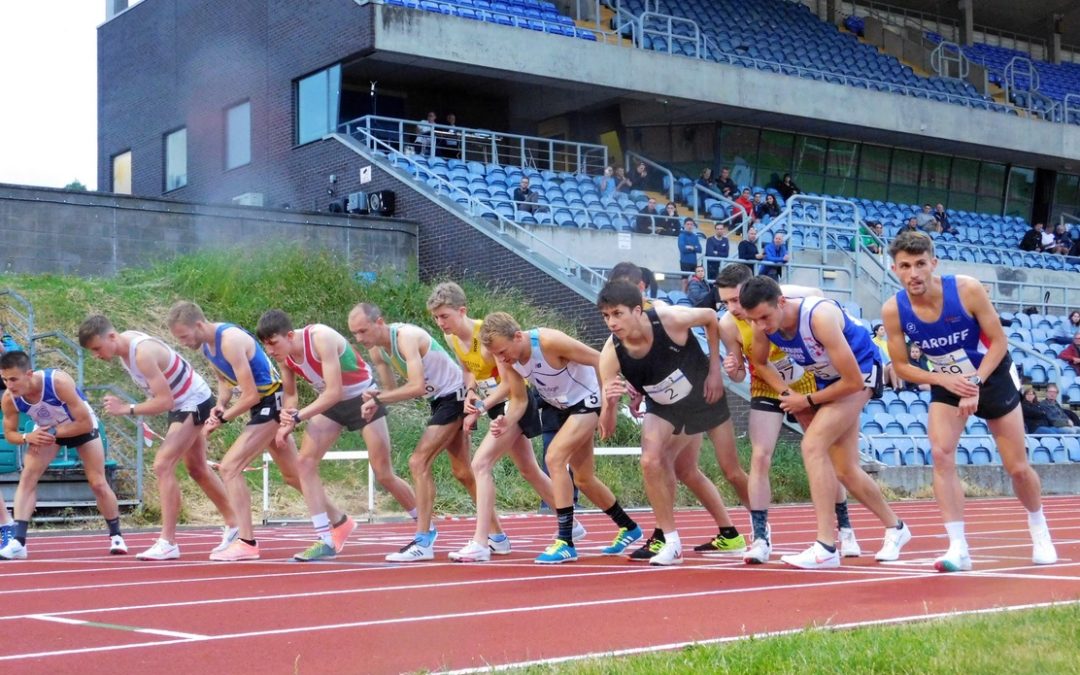 A well organised and innovative evening of Track endurance athletics took place on Thursday June 24th at the John Charles Stadium in Leeds, featuring 10000m races and attracting a host of top athletes. The event also embraced the Yorkshire and Northern 10000m Track Championships, adding to the prestige of the night. Watching the video of the Races, was interesting too, with good and knowledgeable commentary and drumming to urge the athletes on, not something that is usually associated with track running and perhaps something that can be used a little more often, helping to heighten the atmosphere and excitement which must have played a part in the extensive number of new personal bests achieved.

Two Blackburn Harriers were making their debut over the 10000m on the Track – Tim Raynes who had entred the ‘B’ Race and Callum Davidson entering the ‘A’ Race. Callum went into this Race in good form, having won his last three races – a Trafford 1500m in 3.54.75, winning the 5000m in a new personal best of 14.09.81 at Sportscity and then followed that up by winning the Northern 1500m Championships in 3.55.11. The ‘A’ Race featured nineteen athletes and was won by Cardiff’s Nathan Jones in a personal best time of 28.54.39. Callum had a cracking race coming home in 8th spot on his debut with a time of 29.56.99 and it would be interesting to see how many athletes have gone sub 30 in a Track 10000m on their debut. Post Race, Callum spoke to the Club about his race saying “It was great to be part of such a prestigious event and debut at the 10,000m event. I worked hard and I’m delighted to join the elusive sub 30 group. I went out hard with every intention of going well under going through 5km in 14:38 however the wheels quickly fell off but I was strong enough to hold on to run 29:56. Looking forward to not running 25 laps of a track for a while and going back down to the 5000m in a few weeks. Great run from Tim to finish 4th in the B race, and have local support from Marc, Karl, Joe and Nick”. 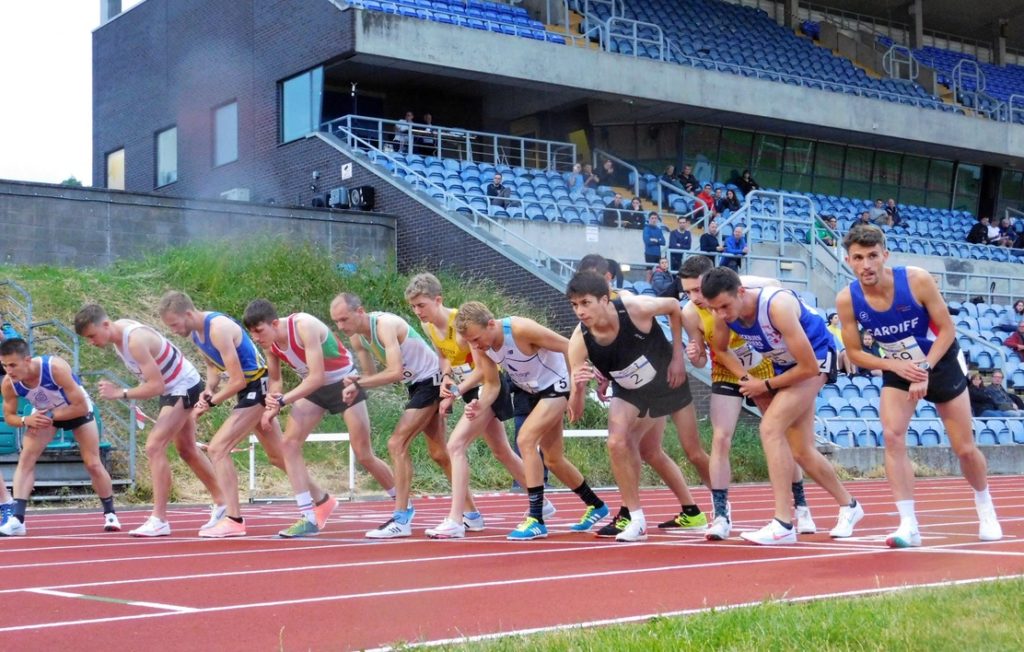 Another fine run on the night came from Tim Raynes in the ‘B’ Race which had twenty one athletes in it and won by Roundhay Runners Callum Elsom in a time of 30.11.87. Tim, like Callum, came into the race in good form having set a new half-marathon personal best of 67.41 at the end of April, followed up by 5000m times of 14.43.93 and 14.55.88 at the Northern Championships at Leigh. Another fine run by Tim on the night saw him take 4th place in the race in a time of 30.27.20 telling the Harriers afterwards “Firstly, thanks to the organisers for putting on a great event … brilliant to have some quality 10000 metre races in the north, hopefully it will return even stronger next year. Happy with how I ran my race. Tried to stick onto the pacemakers for as long as possible. Felt comfortable early on but, as the pace picked up slightly at around the half way point, I started to get gapped by the leading two athletes. I was quickly isolated and struggling, but thankfully I was able to latch onto Joe Sagar and Karl Darcy when they passed me. I knew I needed to stay with them, so worked hard to stay with them. Going into the last K, I gradually started to pick up the pace. Was pleased to finish fairly strongly with a 2:56 last K and 66 last lap. Well done to Callum on his sub 30. While he went out looking for more, he dug in and ground it out in a really gritty run.” 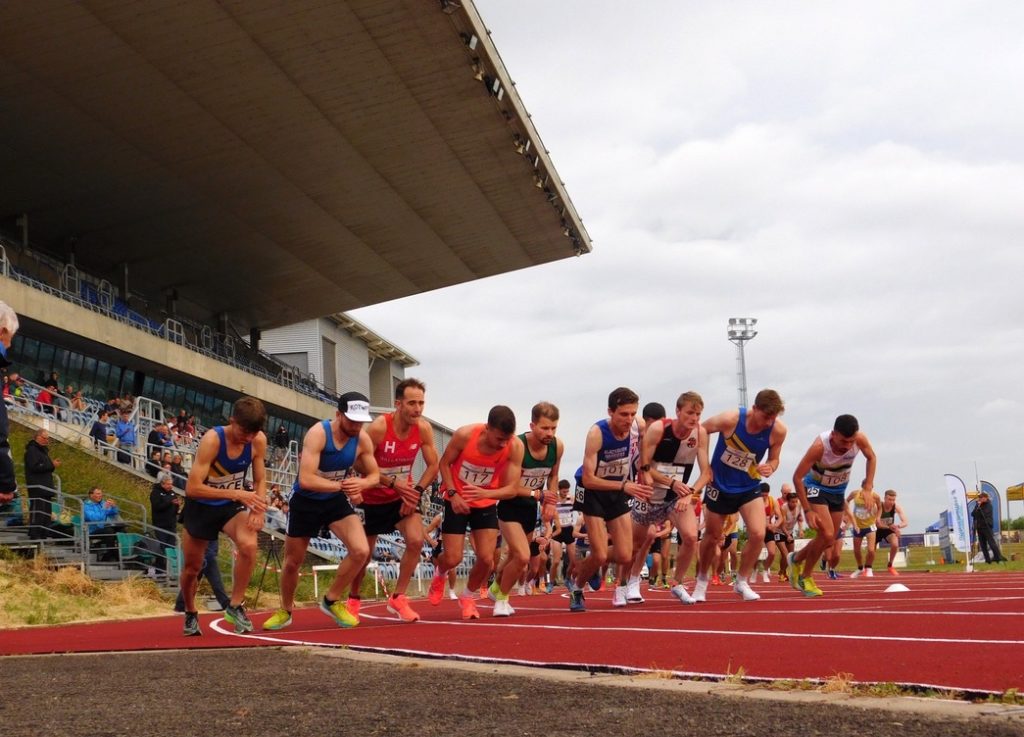 BMC Gold Standard racing at Loughborough on Wednesday evening which saw Dominic Walton take on his favourite distance of 800m in the ‘A’ Race. This was just his third track race since August 2019, his previous two yielding a 1.51.34 at Trafford in May and a 1.52.84 in the National League on June 6th. The night proved to be a good one for Dominic – who has battled over the last couple of years with persistent injury – as he clocked 1.49.99 in the A Race, finishing in 2nd spot behind James McMurray (1.49.46). Following the Race, Dominic spoke to the Club, reflecting on the evening and his race “I felt sluggish and slow the whole way round and switched off at 300m to go. Managed to finish quote strong but I know I’ve got a second per lap that I can improve on. Obviously the prep has been cagey with my quad strain and having to drop out of the Northern league so I’m chuffed to get this season’s first sub 1:50 after 2 years of injury. More to come!“.

Rob Warner, like many athletes this year, are just starting to feel the track in race mode, rather than restricted training over the last year. Rob has had two races this year so far – a 8.18.73 3000m in April at the Birmingham BMC and a 5000m time of 14.31.62 at Sportscity at the end of May. Going into this 1500m A Race, Rob had a personal best time of 3.48.45 from 2018 and had a very fine race on the night, missing a new personal best by a whisker as he ran 3.48.6, placing 6th in the thirteen strong field – the winner York’s Angus McMillan posting a time of 3.46.5. Speaking to the Club after his Race Rob commented that he was “very pleased with the 1500m last night, been finding it really tough to find any sort of consistency in training recently due to nerve issues so I was aiming for anything sub 3:53 really. So extremely happy to be so close to my pb, I got out well and stuck in about 3rd place for most of the race but started to tie up over the last 500m or so, so hopefully with a bit more speed endurance work I can rewrite that pb from 2018!“ 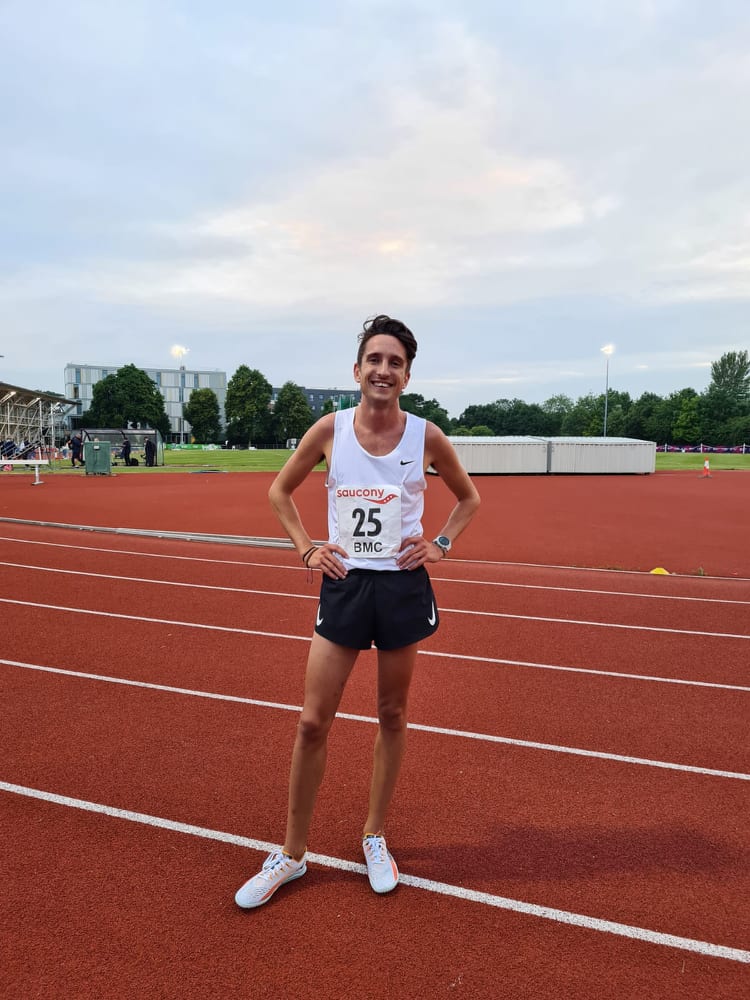 The first of this years Pendle & Burnley Grand Prix Series of Races took place on Wednesday night for Seniors & Juniors – seniors running over 6 miles and juniors over varying distances , depending on age category. In the Senior Race Chris Walton came 24th out of a field of 208 finishing runners with a time of 41.26, the race being won by Clayton’s Chris Holdsworth by over two minutes (34.56) from Dark Peak’s Alex Mason in 2nd (37.04) and Rossendale’s Stephen Corbishley in 3rd (37.17).

In the U13/U15 Race, the Harriers took 1st, 2nd and 3rd places. Winning the Race was Liam Benninson in a time of 7.05 with fellow Harrier – Oliver Brown – just one second behind him (7.06) to top of a cracking race by the two of them. Then came Theo Robinson in 3rd in a time of 7.29 with Callum Singleton in 7th spot, running 7.59 to make it four Blackburn Harriers in the first seven places. Sister Imogen Robinson was next home in the mixed race in 23rd overall and 9th girl with her time of 8.55, followed by Loucas Lancashire in 26th (9.11) and Katie Lawson in 30th and 12th girl, running 9.34.

Just nine entries in the U17 Race with five of them from Blackburn Harriers. The race was won by Burnley’s Jenson Bentham in 23.30, followed by the first of three Blackburn Harriers – Codie Dewhurst in 2nd clocking 23.50, the same time as given to 3rd placed Isabel Holt, also 23.50 and in 4th spot, Daniel Smith with a time of 25.07. 4th and 5th Harriers home were Paige Singleton in 7th position in a time of 29.02 with sister Ellie Singleton in 8th running 29.40. Well done to all of them. 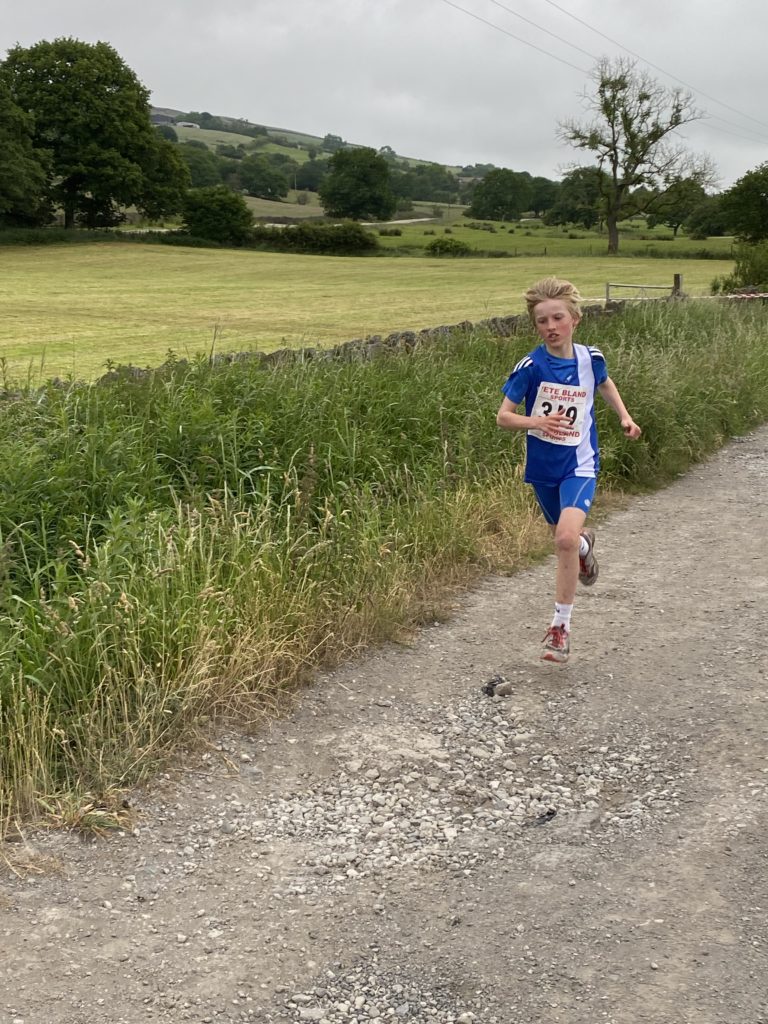 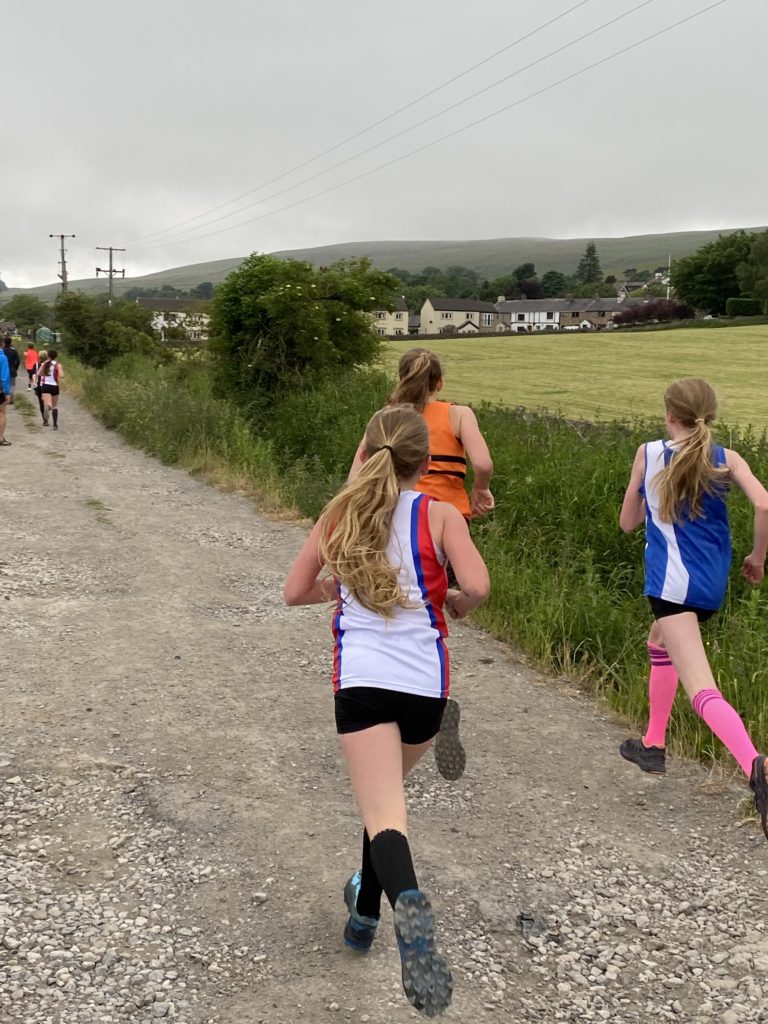 Imogen Robinson on the right 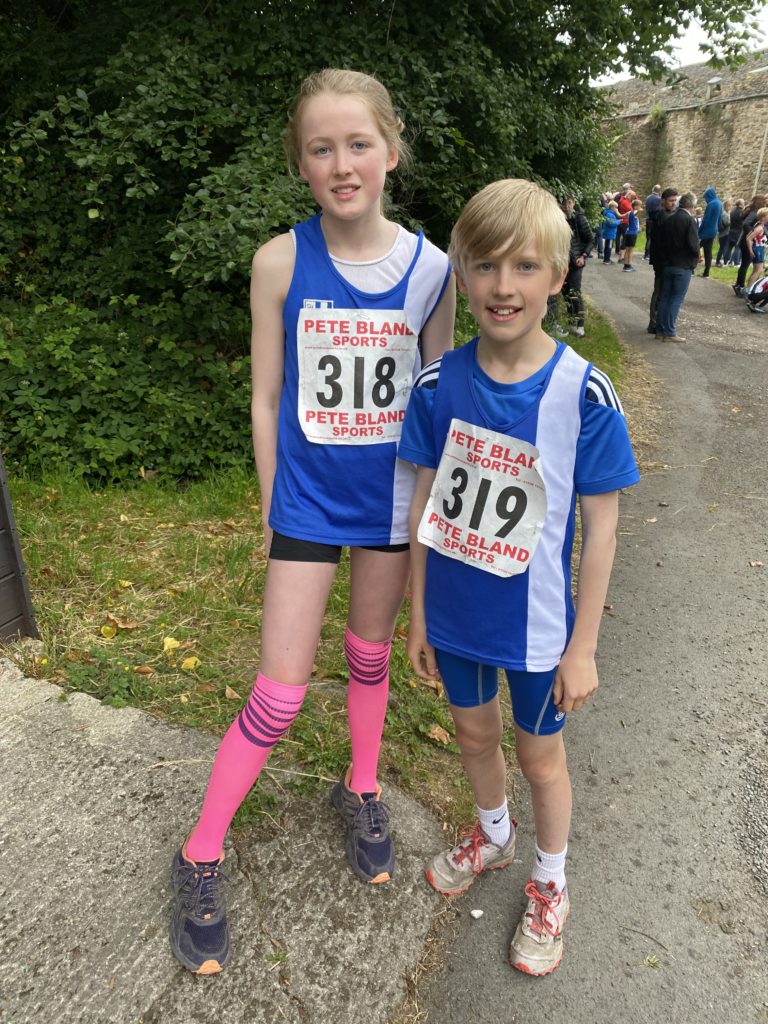