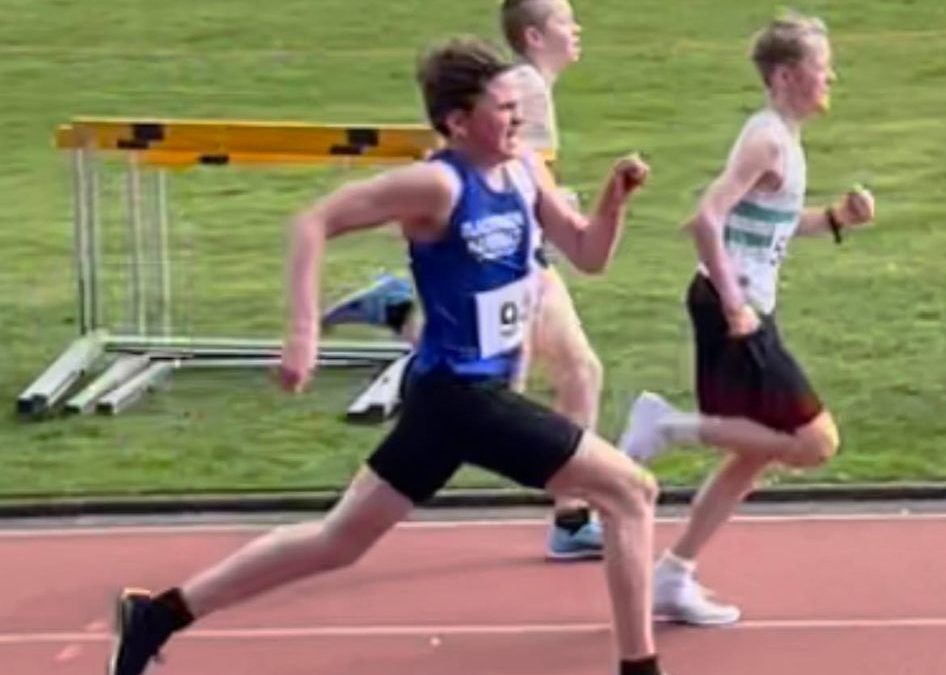 Racing is back and how. At the Podium 5k last night, Beth Potter ran an astonishing time of 14.41 and if ratified, will be a new British and World Record for 5k on the road. Alongside that in the final event of the evening – the Sub 14.30 Race – the first ten athletes all clocked Sub 14 minute times with the Race being won by Stroud’s Tom Mortimer (13.39), in second spot came Leeds athlete Phil Sesseman (13.40) and in third position was Hallamshire’s Andrew Heys (13.46).

Seven races on the night which produced some fine runs by the athletes with a number of new personal bests. Seven Blackburn Harriers had entered and between them produced some excellent runs including personal bests. But a big shout out to Ben Fish who at 38yrs of age ran 14.33, finishing 8th out of a field of thirty three runners in the Sub 15.30 Race – and if ever there was an example of consistency of quality of performance over a long period of time, it is Ben who spoke to the Club after his race saying “I was feeling good going in to this one with plenty of miles and consistent training under my belt. Would have liked to have ducked under 14:30. Happy with the result, I ran 14:38 20 years ago so it’s great to still be running faster after all this time”.

Ryan Bradshaw ran in the Sub 17.30 Race and absolutely smashed that to pieces as he chopped a whopping 58 seconds off his previous best time to set a new PB of 15.51 in winning the race from Ben Crowther (15.55) and Martin Greenwood (15.58). Ryan was delighted with his race on the night telling the Club that “After over a year since joining Blackburn Harriers, it was a long awaited debut for me! It was a great night of racing and great to see so many of my club mates running fantastic times and supporting us. Really pleased to have run a 5K PB and sub 16 mins for the first time. Massive thanks to Nick McCormick, my training group, family, girlfriend, and the club for the effort, support, and belief they have all shown in me!” In the same Race Laura Hesketh who runs for Blackburn Harriers on the Track had a good return to racing too – clocking 17.24 – as she commented afterwards “Shock to the system back racing after so long but was a great night with people running some amazing times”. Lee Casson was making his debut for the Club too at the same time as making his debut over the 5k road distance – and what a race he had, clocking 16.33 first time up and was very happy as he spoke to the Harriers afterwards saying “After such a long time away from racing it feels great to get my first official 5K on the board and my first race in a Blackburn vest! I’m very happy with my time and owe a massive thanks to Nick for his guidance and the Seedhill lads for the push in training during this past year”.

Jacob Watson and Marc Hartley ran in the Sub 16.00 min race which saw fifteeen of the twenty one runners all clock Sub 16 min times. Jacob finished in 10th spot and set a new PB by 12 seconds as he ran a time of 15.28 and described his race after to the Harriers commenting that it was his “First race in over a year and I couldn’t have asked for better conditions. The lead group were just a little too quick for me so I decided to settled in to the second one and took it from there. Told myself I’d claw my way back up to the main group but it wasn’t to be. Felt good until the last kilometre but just about held it together for a PB! Looking forward to getting back to regular racing now to see what I’ve got over the other distances”. 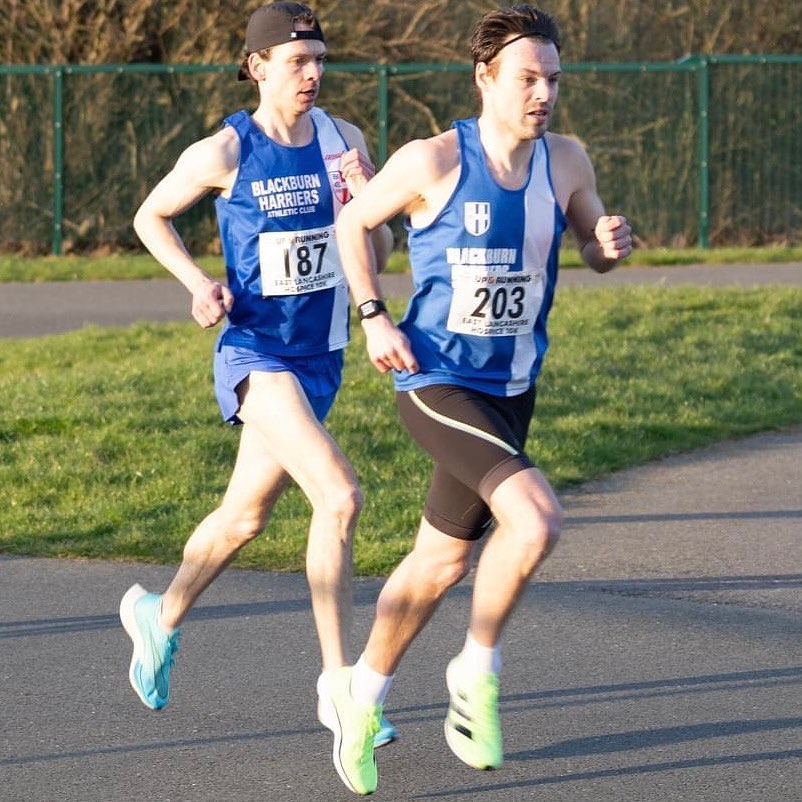 Marc Hartley was just two places further back in 12th spot, clocking 15.37 which was just outside his personal best set in 2018 (15.29). Marc told the Club about his night and the standard of racing that is becoming a regular feature of the Podium 5k Series saying “Podium is now undoubtedly the North’s premier running venue and practically perfect conditions were present for all who competed, on this return to racing. Once again there was a strong representation of Harriers in all races, showing our strength in depth. It also provided an opportunity for some of our members to finally make their long awaited debut…Ryan Bradshaw has been waiting over 12 months and deserves a special mention for his performance. Other stand out performances were the ever improving Jacob Watson and the stratospheric rise of Mark Magee, in their respective races. It was an unusual feeling to go through a pre-race routine after a long while but was great to get the vest and racing pumps back on, despite the rust!”

Mark Magee was confident and entered alongside Ben Fish into the Sub 15.30 Race – the penultimate Race of the night and the one which featured Beth Potter clocking that remarkable time of 14.41. Mark went into the race with a personal best of 15.40 and didn’t hang around as he smashed that by half a minute to close in on that sub 15 min time – running 15.10 on the night. Post race, Mark shared his thoughts about the night with us commenting that he “Felt good going in to the race but quite nervous with lack of races. Really happy with the outcome, a big PB and proud to wear the Blackburn vest. Big thanks to Nick for all his help and I can’t wait to back it up at Mid Cheshire. Great night for racing, perfect conditions and great set up as usual at Podium”. 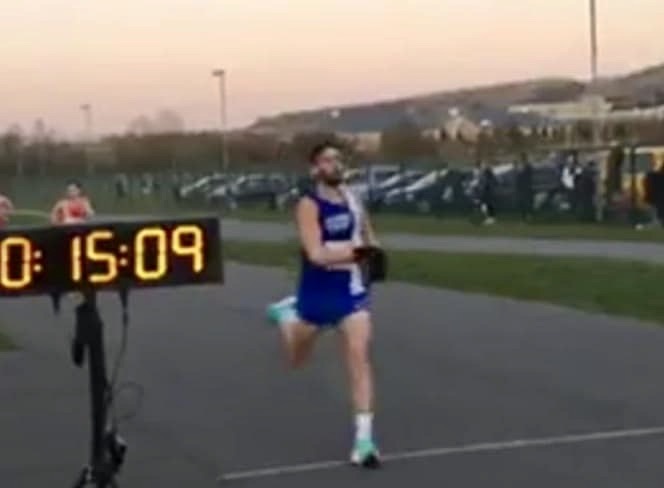 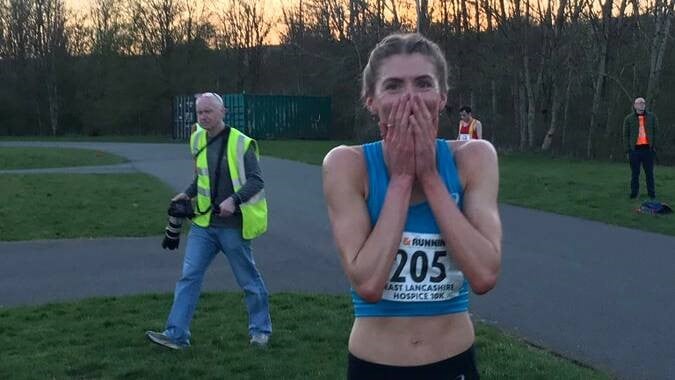 Seven athletes from Blackburn Harriers opened up their track seasons at Trafford. After such a long time away from Track racing and training time on a track truncated throughout the last year, it has been difficult for athletes. Having had just one or two track sessions in the last three months after the most recent lockdown added to their problems, however, it didn’t stop them looking forward to the event and putting in some very good performances.

Three of the Harriers entered the 3000m – Matt Ramsden, Ben Makin and Joe Gebbie – as part of a twelve strong field. Matt ran a very good race tactically which saw him come out in first place with a new PB of 8.43.51 an improvement by some four seconds. Ben was running his first race over the distance and posted a very good time of 8.52.86 in 6th place whilst Joe Gebbie was also running his first race ever over the distance clocked a debut time of 9.27.16 and told the Club after his race that it was “Brilliant to be back racing but disappointing season opener for me – legs said no from the off and I decided early on I couldn’t stick on the back of the pack. Nice to have the whole season ahead of me to knock the time down to where I want to be. Quality runs from Ramsden and Ben coupled with the sun made it a great first day back. Everyone needs to see Ben Stratton’s storming 1500 finish too!”

Bottom of age U20 Eleesha Charnley last raced over a year ago in February 2020. Today she ran in the 400m for only the second time – her previous outing being 64.0. Eleesha took 2.2 seconds off that time to set a new PB of 61.8 as she won her Heat from Warrington’s Emily Jackson in 2nd place (62.1) and Trafford’s Molly Haworth in 3rd (65.2). Later she told the Club that “it was good to be back racing after over year, I surprised myself wasn’t expecting to be able to get a pb or anywhere near it. Looking forward to the rest of the season”. Brother and sister – Ben and Abi Stratton – took on the 1500m which saw Ben place 4th out of a field of 13 in a new PB time by some three seonds of 4.41.9, the Race being won by Wirral’s Harry Ross-Hughes (4.35.46). Abi drew the short straw, being the only female in a race of thirteen and it does make you wonder about the grading system when this happens – Abi clocking a time of 4.55.55 with the race being won by Ethan Brady-Jones in 4.09.63. Isabel Holt made her debut for the Harriers and it was also her first time ever on the Track for the bottom of age U17. Isabel had a good opening run which saw her place 4th in a field of nine athletes in a time of 5.00.56 – the race being won by Kendal’s Sophie Cowin (4.56.17).