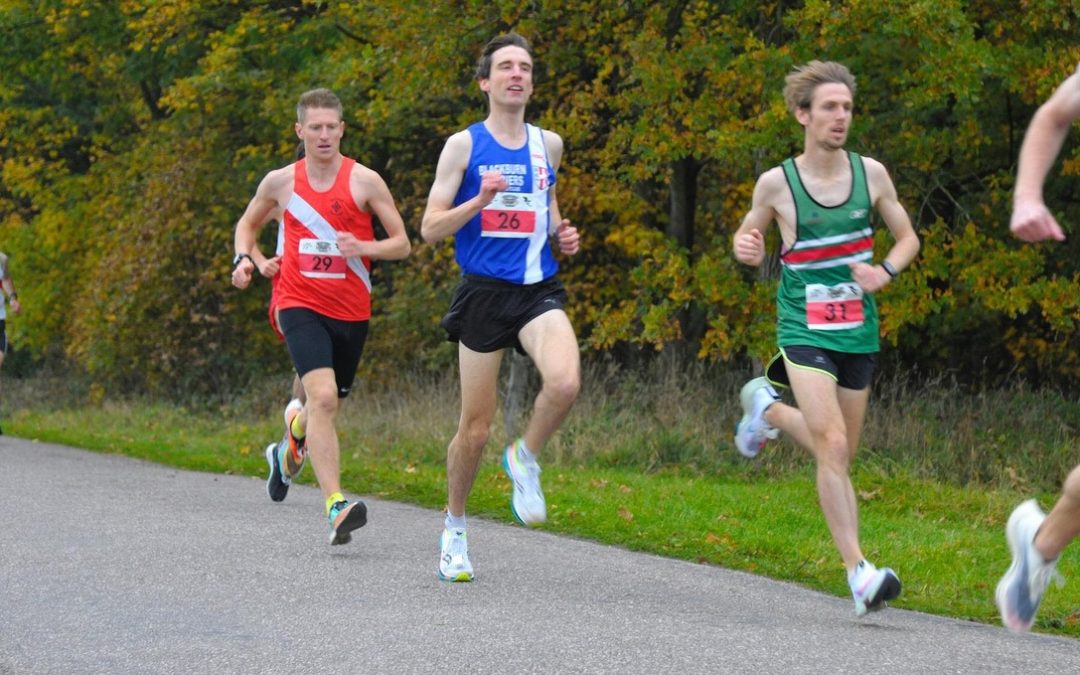 The Run Cheshire 10k took place on Sunday in what can only be described as very good weather conditions for fast running, which saw the first five athletes home, all in sub 30 minute times – the overall winner being Birchfield’s Omar Ahmed in 29.24 followed in by Morpeth duo Chris Parr (29.36) and Alex Brown (29.37). Eight hundred and thirty nine runners completed the race.

All photos courtesey of Run Through

First of the seven Blackburn Harriers across the finishing line was Rob Warner in 5th place with another sub 30 minute clocking of 29.59. It was also a special day as Rob ran in a Loughborough vest, remembering George Gandy, one of Britain’s most celebrated and loved Endurance Coaches who sadly passed away recently. Post race, Rob spoke to the Club, telling us that he was “really happy with the run today, would have been happy with anything under 30:30 so will certainly take sub 30! Was a strange start due to the changes the organisers had to make but after the first couple of KM I managed to get into bit of a group which helped. Last 2k was tough but very happy to dip under 30!“ 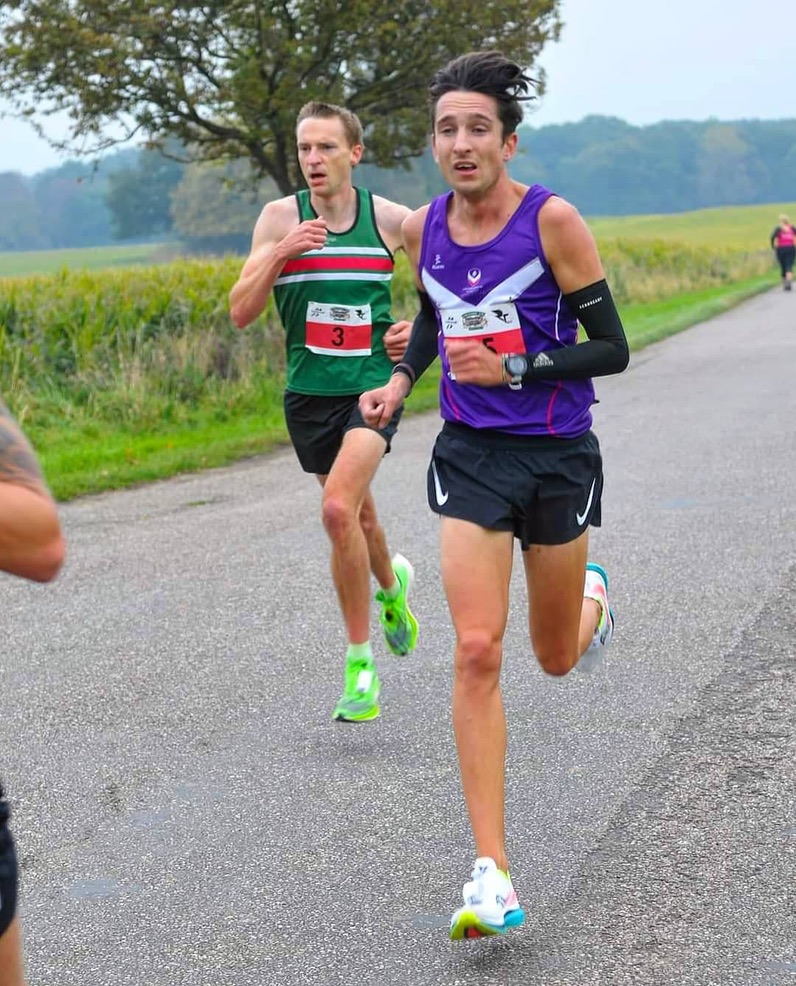 Tim Raynes had a very good run too, going into the race with a personal best 0f 30.46 and with just two 5k races under his belt since the Trafford 10k on March 1st. Running a time of 30.20 in 12th place, Tim set himself a new PB by some 26 seconds, commenting after finishing the race that he had “been targeting this race for a couple of months, hoping it’d still be taking place. Cracking job from Matt Wood to get the race on … even having to change the course to an out and back. Weather conditions turned out to be perfect, so I knew it was a great opportunity to PB. I got to 5k in 15:00, knowing that so long as I could hold it together in the second (slightly tougher) half, the PB was on. Slowed a bit, but was really pleased to knock 26 seconds off my previous best. Well done to all the Harriers running … some cracking runs all round!” 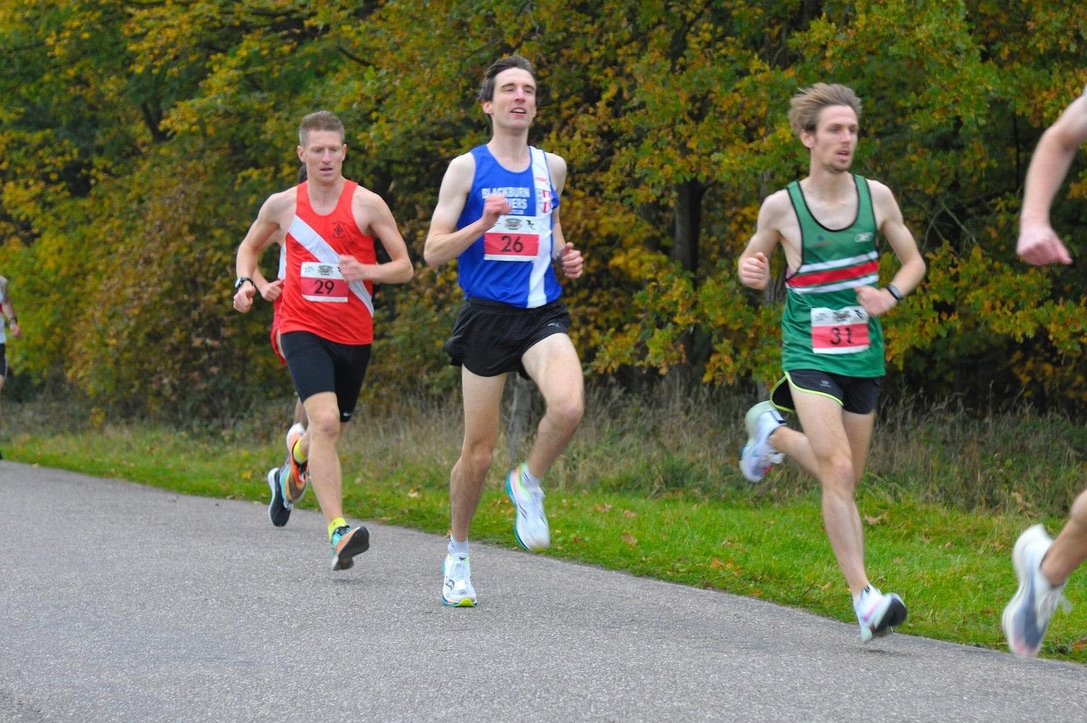 Ben Costello had run three races in August (5k) and September/October (3000m) as he went into this race with a personal best of 32.27. Ben smashed that to pieces on the day by a minute and twenty seconds as he posted a new PB of 31.27, crossing the line in 24th place. A very happy athlete spoke to the Harriers afterwards, telling us that he “Had this race in the diary since last november but with 2 dates cancelled I didn’t think this one would go ahead but very glad it did. Don’t know where to start really, over the moon to knock a minute off my 10k time. I’ve had a few set backs over the last few weeks so wasn’t expecting anything special i went into the race without a time in mind and just to enjoy the race it was very tough on the way back but managed to see it out. Well done to all the other Harriers who ran today“. 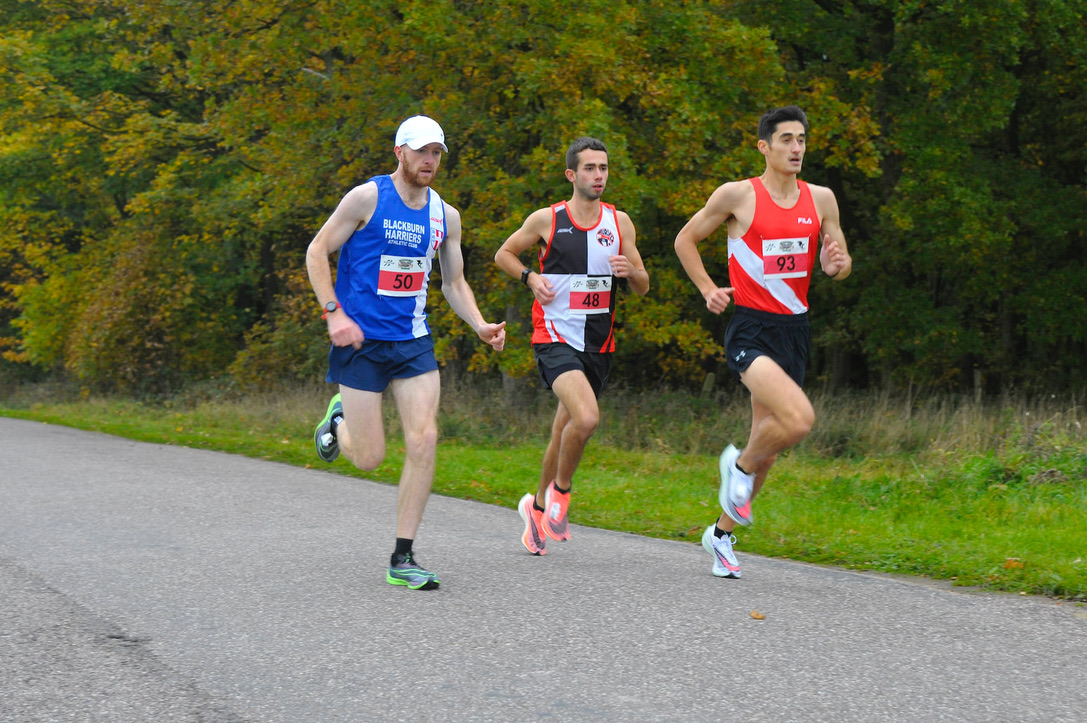 Jess Judd was the next Blackburn Harrier to finish after last running a 10k at Trafford on March 1st which she won. Since then has run a number of Track Races over 800 / 1500 / 3000 / 5000m, which produced four wins, one 2nd and one 3rd place followed by a 5k win at the Podium 5k in early September. So her first 10k for some seven months saw her take the win again in a good time of 32.32 and this after suffering from stomach pain over the last 4k but was still happy to be the first woman across the finishing line. 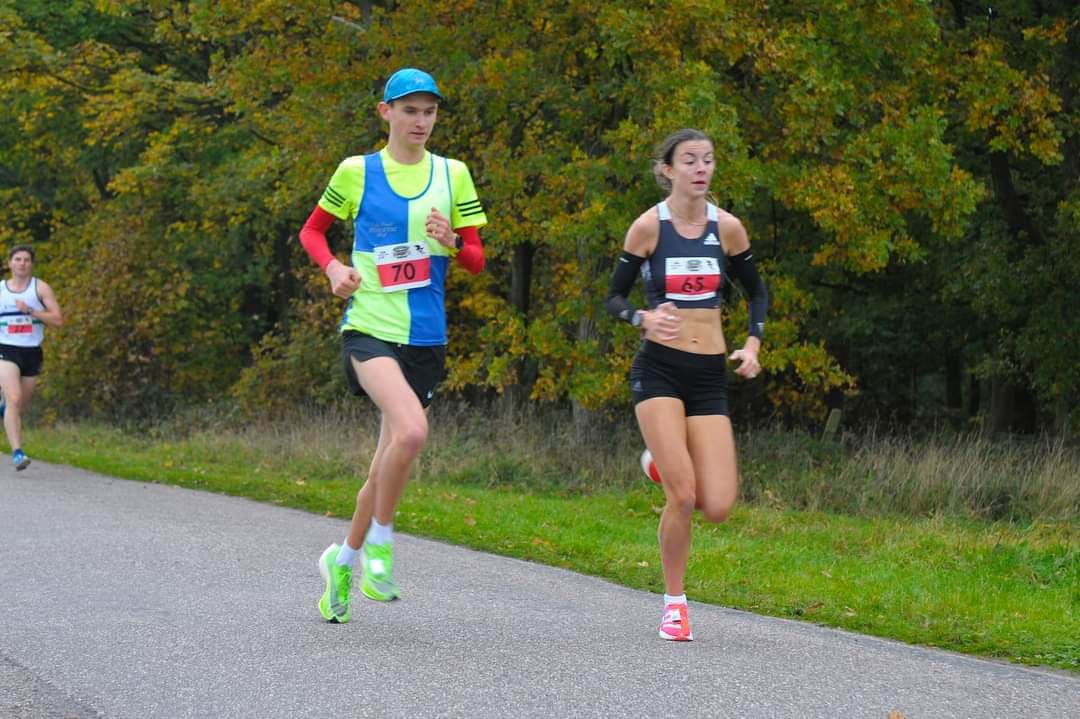 Having run just one race since the Trafford 10k on March 1st, Mark Magee was another Blackburn Harrier who had cause to celebrate his run at the Cheshire 10k. His personal best for 10k so far was 33.20 which he posted in December 2019. Finishing 53rd on the day, Mark chopped a full half minute off his previous best to clock a new PB of 32.50. After the race, Mark commented to the Harriers that he was “Really happy to break the 33 barrier and finish in 32.50. I had to run the majority of the race solo but it was great to have that race feeling again. Fantastic and well organised event showing that races can go ahead safely”. 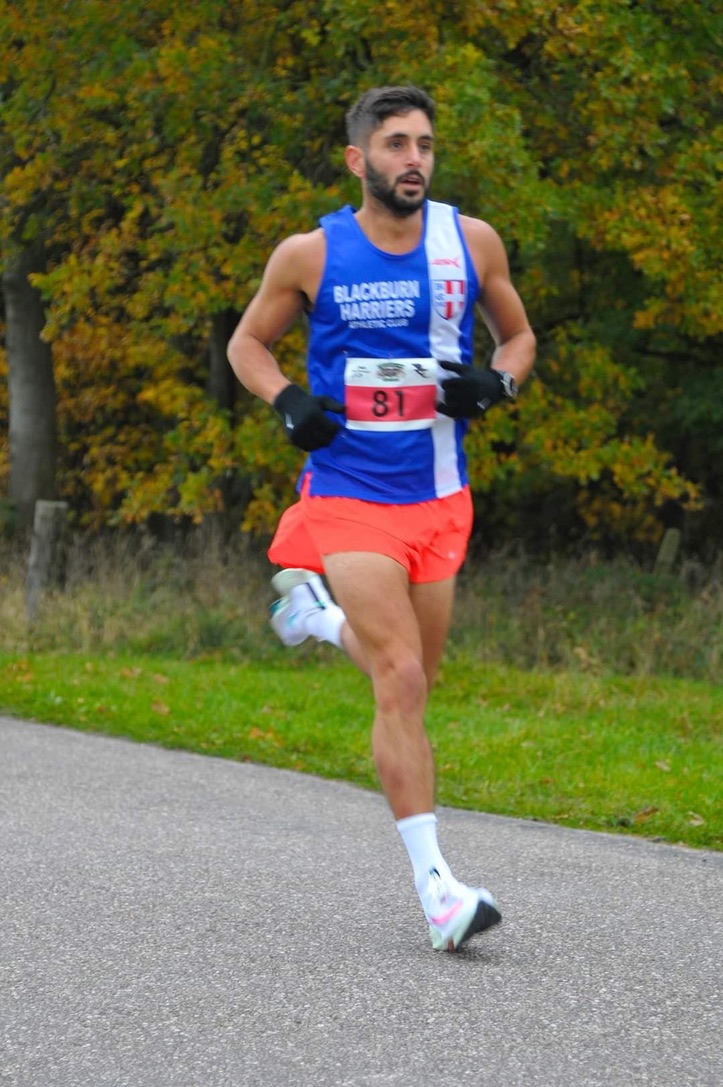 Andy Payne (V45) was the sixth Blackburn Harrier finishing on the day, placing 108th with a time of 34.57 and this in only his second road race all year following  a 31st place at the Lancashire Cross Country Championships back in January. Speaking to the Club after the race, Andy told us that the “Cheshire 10k was held today in the beautiful surroundings of Arley Hall. Fantastic conditions for racing and a great course and well organised.
It was nice to see quite a few Blackburn Harriers doing some fantastic times achieving some PB’s. Although my time was slower than I wanted, I had a good first 5k but on the switch back lost my focus on the two other runners I was with and was left on my own for the final 5k.” 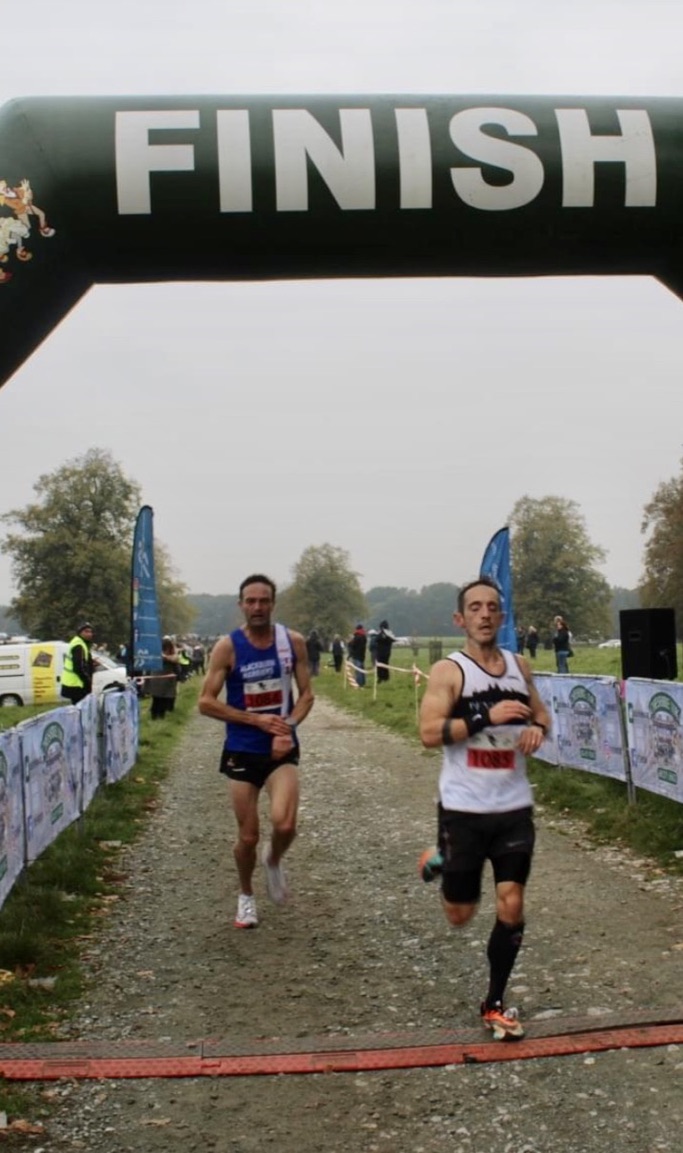 Jonny Murphy produced the fourth new PB of the day for the Harriers and how, smashing a huge one minute and twenty seconds off his previous best as he clocked 35.02 in 113th spot –  telling us that it was “Perfect conditions made for great running today by all the Blackburn athletes! Happy myself to come away with a 1 minute 20 PB”. 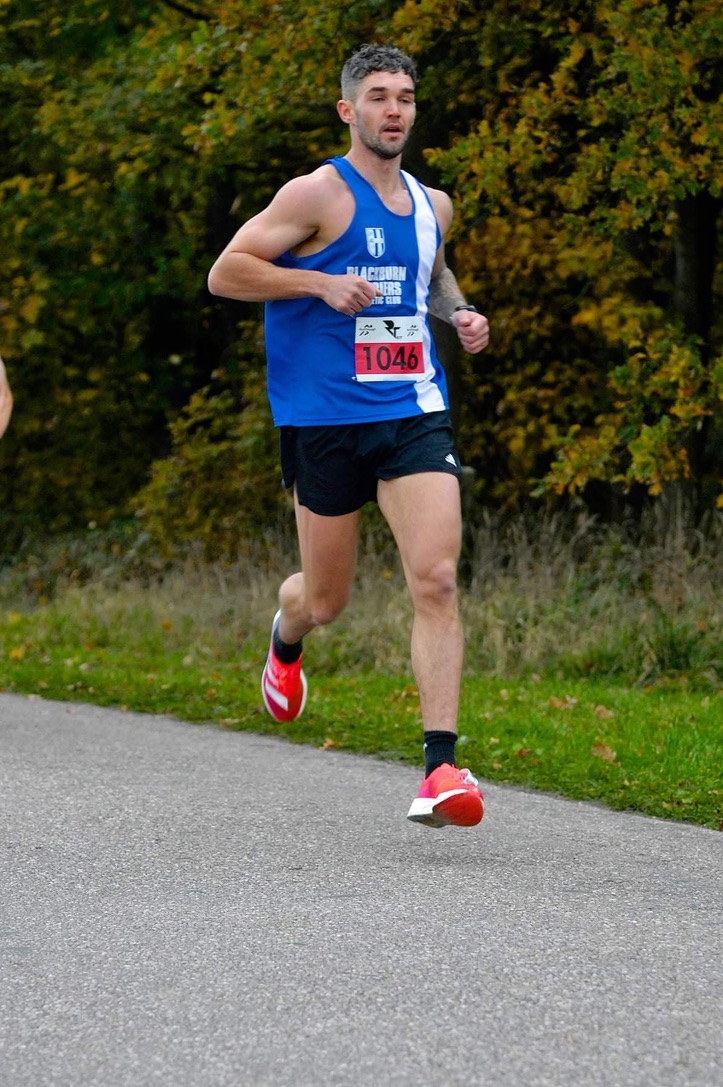