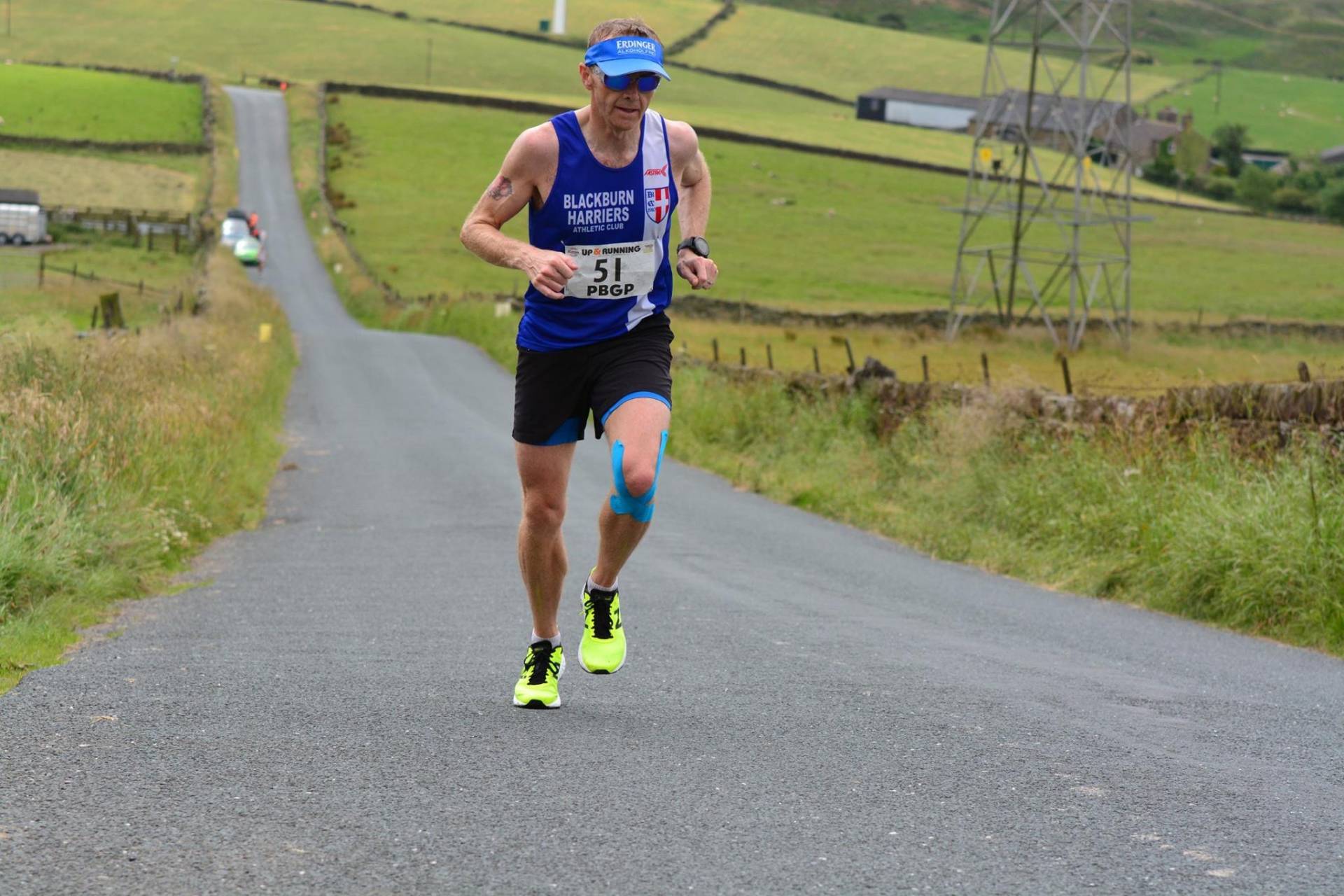 Two hundred and sixteen finishers in this very tough road race won by David Rigby in very warm conditions in a time of 78.22. A couple of Blackburn Harriers competed on the day with Shaun Livesey having a great run to come home in 2nd position and 1st V40 boosting his position overall in the B&PGP Series. After the event Shaun spoke to the Club about how he approached the race telling us that he “had a game plan today and managed to make it stick. The first mile of the race is fast, so I went out hard then settled into it. I was running hard but I was anticipating being caught by Julian Hood maybe by mile 5. It never happened, the further the race progressed the chances of him catching me grew slimmer. I was still running hard and by the time I hit the final climb lenches and knew I wasn’t to be caught. I finished 2nd in a time of 1:25:09 A PB on that course. A good days racing”. Carly Edwards was also out having a run placing 127th in 2hr 06.04. 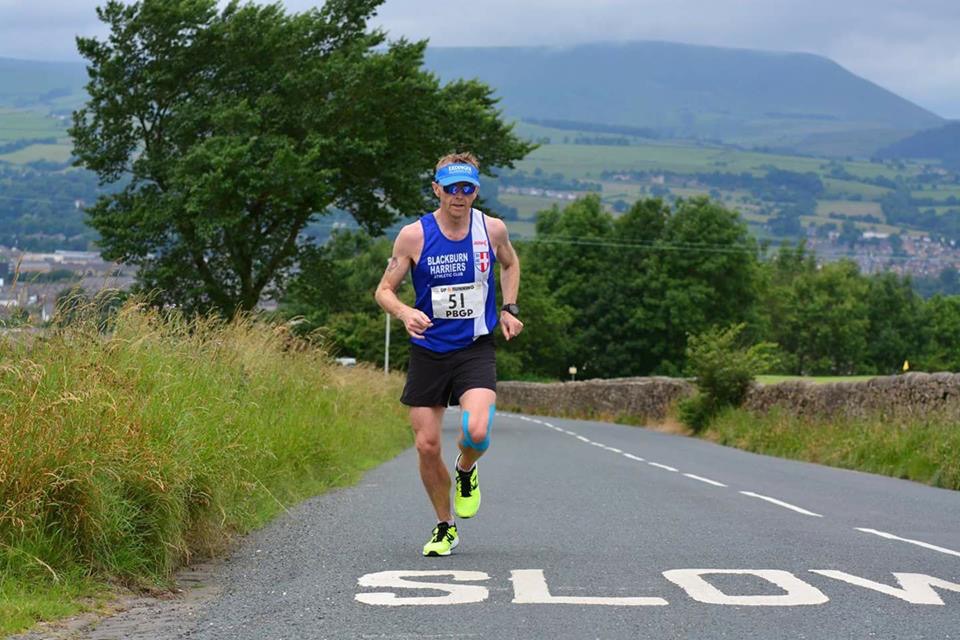 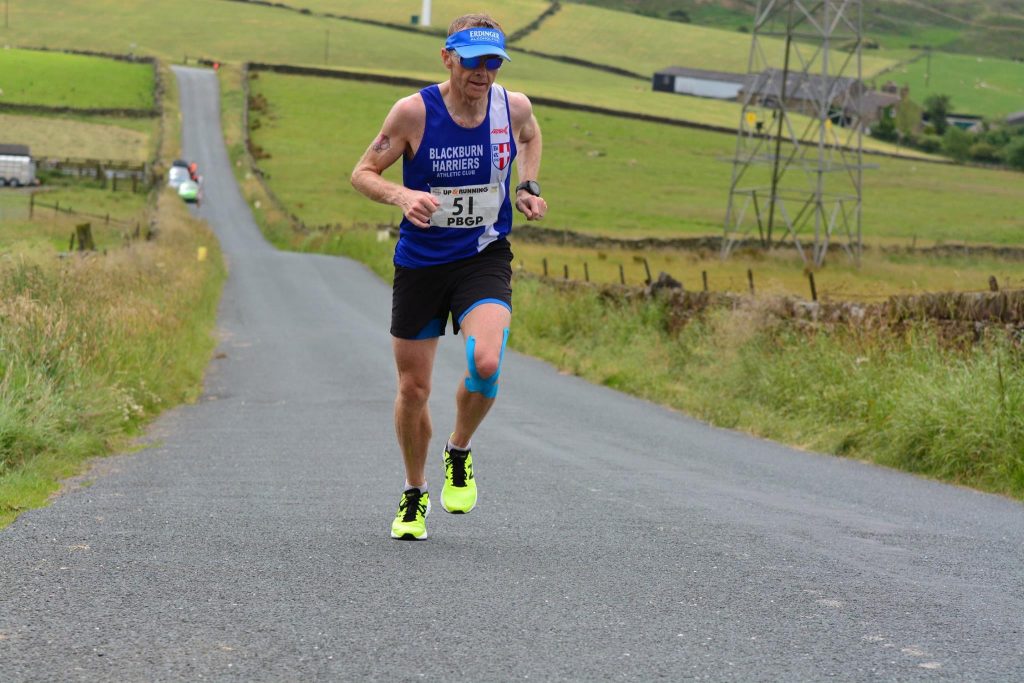 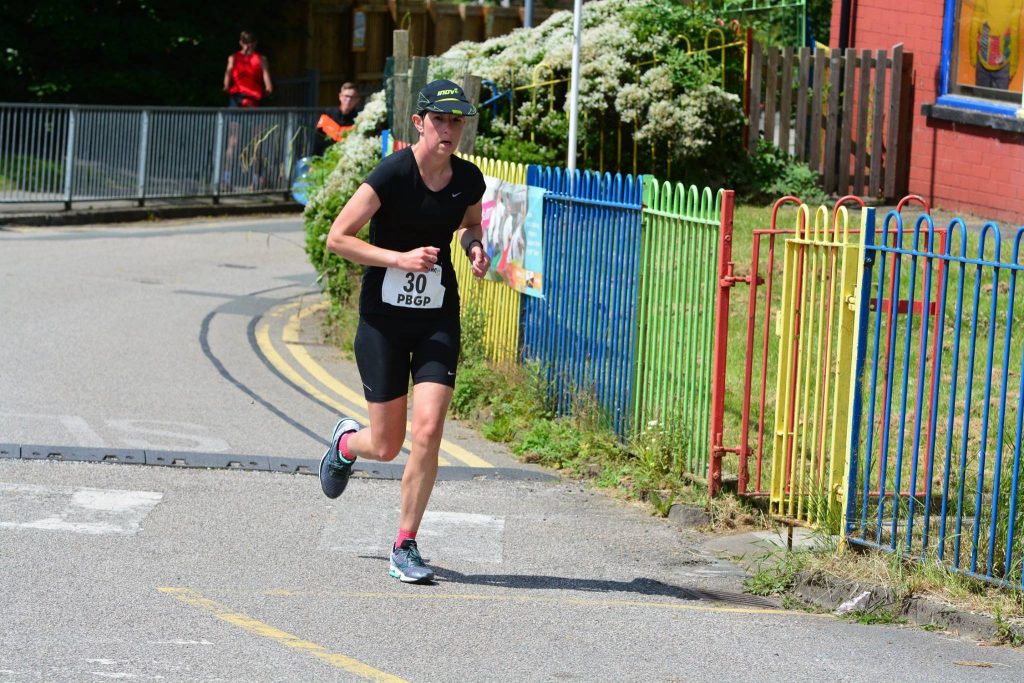 Bob Shorrock was racing again on Mont Blanc, a venue and Race in which he has had great success. This year he he raced the 23k Course being unsuccessful in getting into the 42k Race. V55 Bob had another great Race at the shorter distance finishing 40th overall out of a field of 1649 – 1st British Athlete and 1st Vet in the 50 – 59 Age Bracket which is how the Race calculates the age groups – in a time of 2hrs 49.05.

Afterwards, he spoke to the Harriers commenting“Mont Blanc was a great weekend again. I was in the half (23K 1650m elevation gain) as I didnt get in the marathon this year (it is a lottery). Set off steady – didnt feel too good until about half way when the climbing started and then I got moving. I passed to V2 second place guy about 1 mile from the finish. it is getting harder as the age groups are 10 years (50 to 59). The course is beautiful and the organisation fantastic. for anyone who loves the mountains, I highly recommend it”

Paul Brindle …..was flying the flag for Blackburn Harriers in Ullswater which resulted in a win for Jordan Hull (1hr 15.30) at the head of one hundred and twelve finishers. Paul had a very good day coming home in 7th spot overall and 2nd V40 in a combined time of 1hr. 24.29.

After the Event Paul spoke to the Club about how his day had gone saying “With Ullswater tri being a 14:30 start it falls in to my category of being the perfect start time. Matched with beautiful weather in the Lakes it really doesn’t get much better. It’s a great little well organised event and at modern day prices it is cheap. The swim went well even had my very own swim counter shouting my position “19th”. The bike leg started with farmers blocking the traffic. Don’t they know that normal road rules don’t apply triathletes in a race. With a loop taking in Lowther Castle I was back heading to transition. Thought I’d be proper triathlete and leave my shoes clipped in and do a running dismount “9th”. That actually went well but somewhere down the field I sliced my big toe open. I didn’t noticed til half way round on the run but i wasnt stopping, running is my strong discipline and gaining ground. My run counter was shouting things like “you can take them all”. Which I did and managed to sneak up a few places on the last lap “7th”. A brief visit to the first aid tent and I had to head home for family duties”. 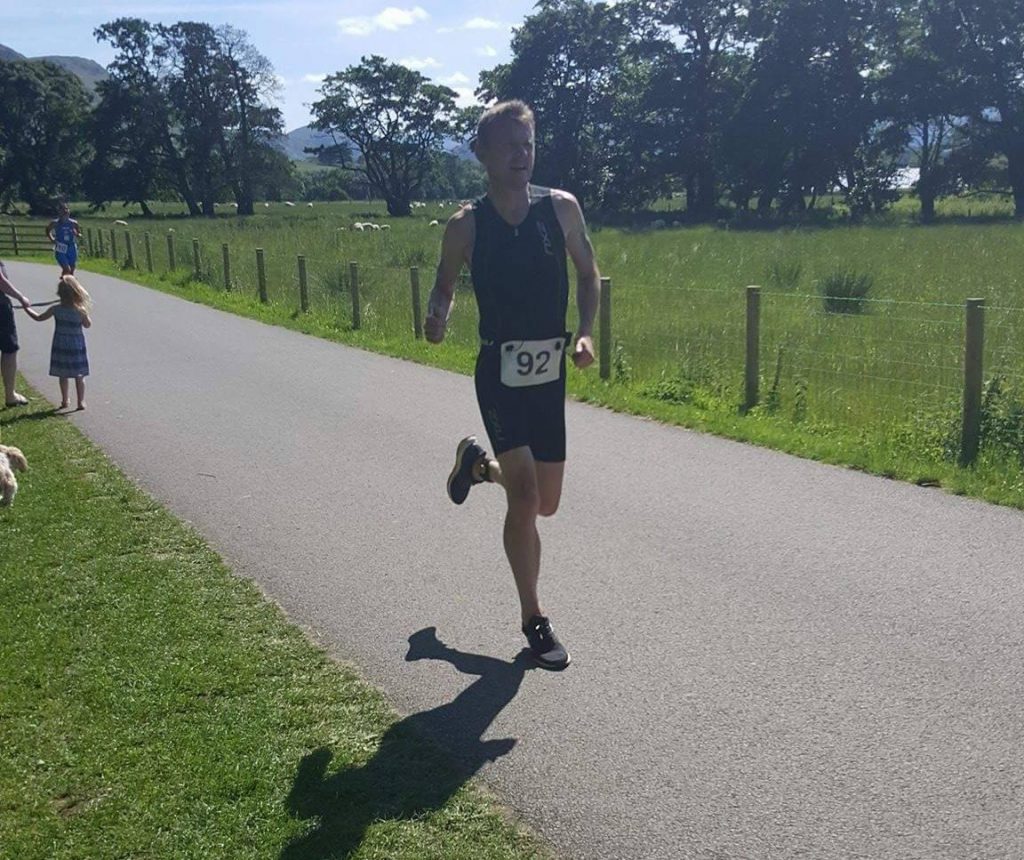 This might be called the day when the Thompson Family cleaned up. Dad Chris described the day as “After much debate between us we decided to go up to the Alva games in Alva near Stirling Scotland as this was part of the Bofra championship series and we had heard good things about previously. When we arrived the under 12’s fell race was one of the first events of the day in which Kady and Dexta both competed in. In usual Bofra style this was a very tough course and in Dexta’s words it’s was the hardest climb he has ever done with a very tough descent to follow on the way back down but he gave it his all but still struggled to catch the winner Will Hall who is on top form at the moment but nevertheless he still got a podium finish and was rewarded with a prize of £30 – Kady finished as the 5th girl giving her a prize of £5. Later on the track races on a field began, with Dexta and Liberty both trying the 800m, Dexta then managed to take gold in this event bagging himself a prize of £50. Dexta then also tried to win more money in other events such as the 200/400/1600 but due to a very controversial handicapped start he failed to do so. Liberty managed to secure a 3rd place spot in the 400m and was rewarded with £25 along with £10 for coming 6th in the 200m. Having won a nice pocket full of cash they tried to finish of with the relay prize so we put together a team in the 4x100m with probably the youngest combined mixed age team of the day with Dexta, Liberty and some of their friends from Calder Valley -William Hall and James Duffy. They ran a great race but were unlucky and finished 5 out of 8. Young Felix wasn’t being left out as  did a 50m race and won that, gaining a prize of a medal and £2″.

Bofra Results not yet available 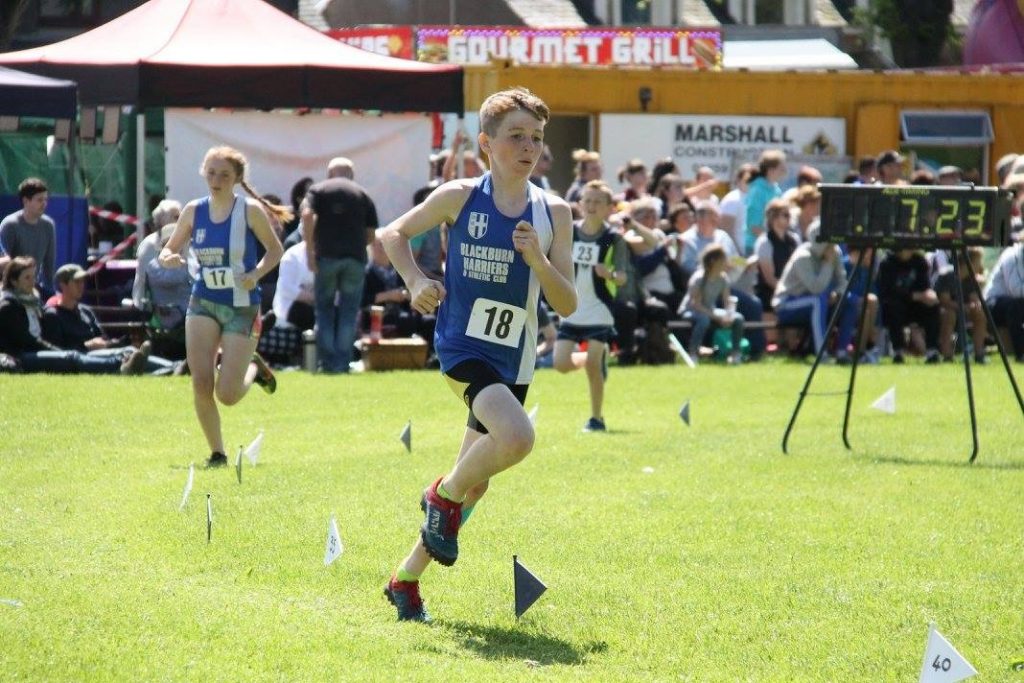 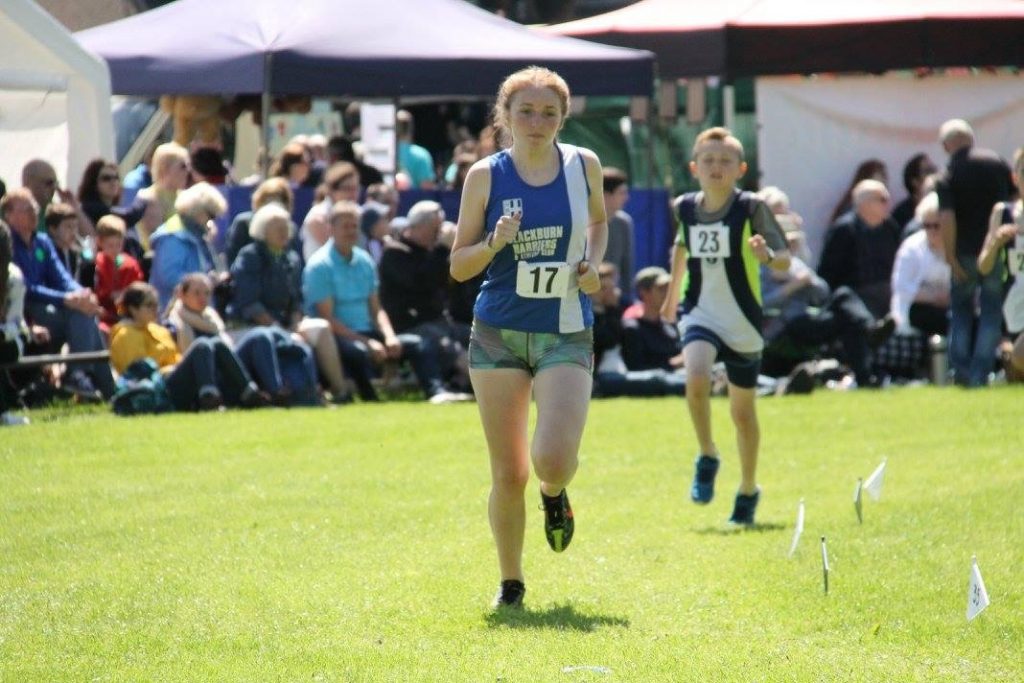 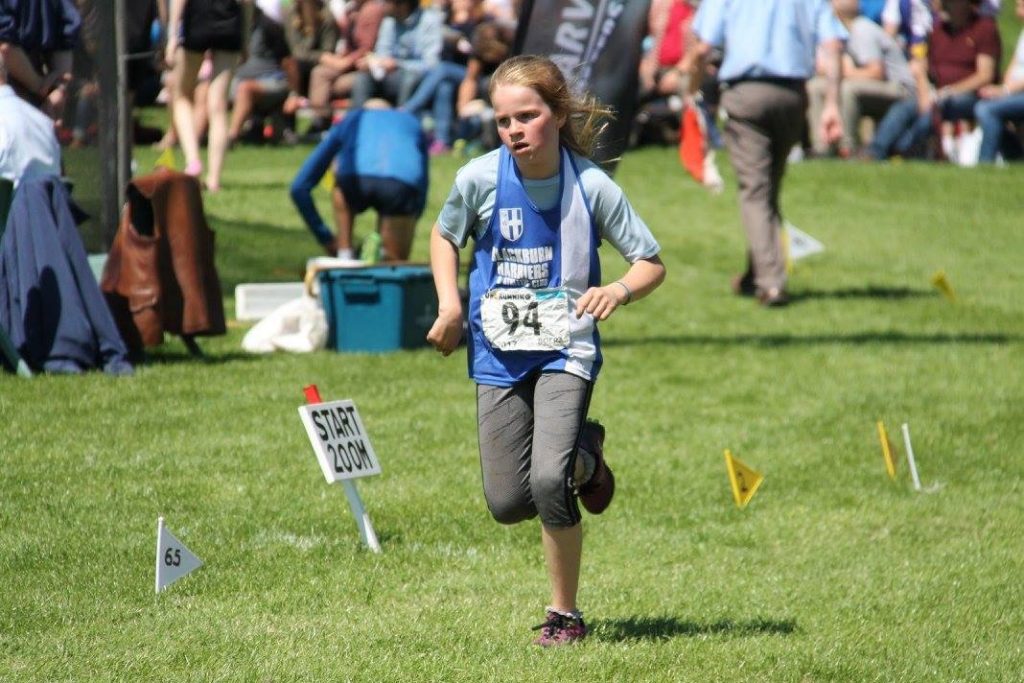 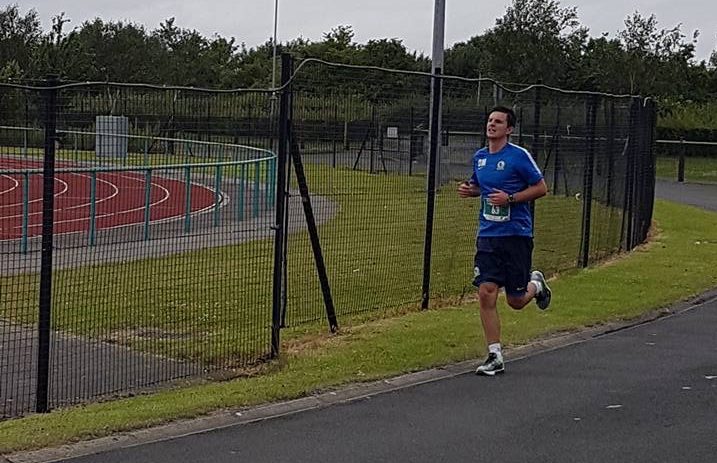 Danny Maynard – one of Blackburn Harriers Sprint Coaches – tackled a Duathlon for the first time in Preston at the weekend. Held at the Uclan Sports Centre Danny finished in a time of 50.35, the event featuring a 2 mile run and 8 mile cycle ride and another 2 mile run to finish. 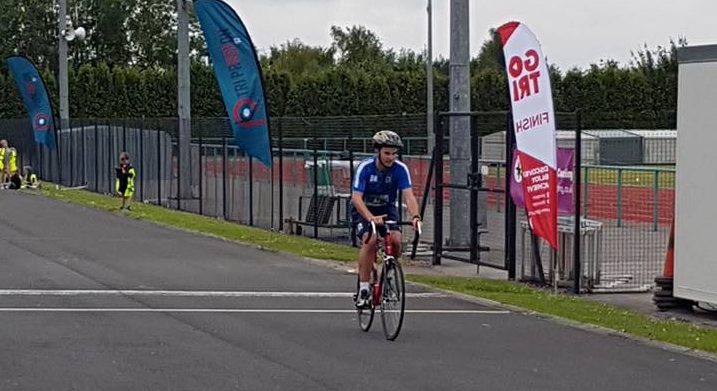