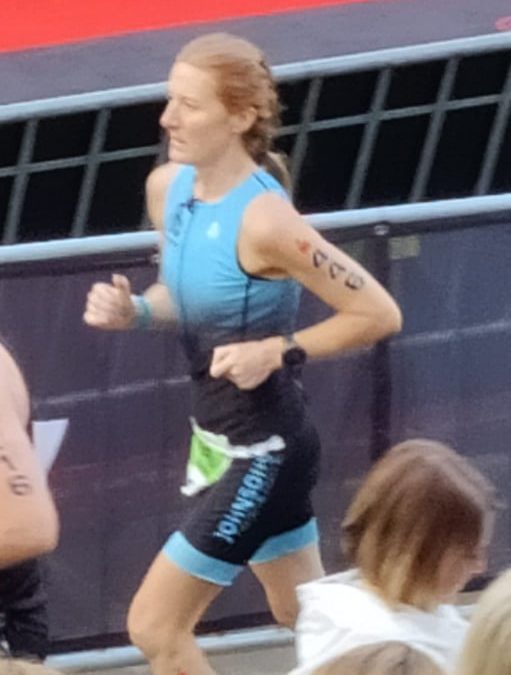 More than a little change in the weather as athletes gathered for the Sprints Grand Prix at Trafford last night – July 7th – with heavy rain, on and off all evening and a very wet track. Some new members of Blackburn Harriers were among the ten athletes from the Club who made the trip over on the night and were rewarded with some good performances, even in particularly difficult conditions. Certainly not a night for personal bests!

Dominic Bretherton was first up in Heat 3 of the 100m posting a time of 12.3 in 4th spot. In the following Heat 4, new member U20 Claudio Enofomi ran his first race for the Club and won the Heat in 12.15 followed home in 2nd spot by Stuart Yates setting himself a new PB of 12.27, bettering his previous best by a tenth. Heat 5 saw the debut of another new member for the Club – U17 Trey Zengeni – who came home in 2nd spot with a time of 12.28. Heat 6 produced another win for Abbey Riley as she ran 13.19 and in Heat 7, Poppy Mae-Preece set herself a new PB when she ran 14.05, finishing in 3rd place. Poppy later cleared 1.47m in the High Jump, taking 2nd spot behind male athlete Nicholas Blore who jumped 1.78m. There was a seasons best for Ben Branton in the Long Jump as he leapt out to 5.80m in 2nd spot. 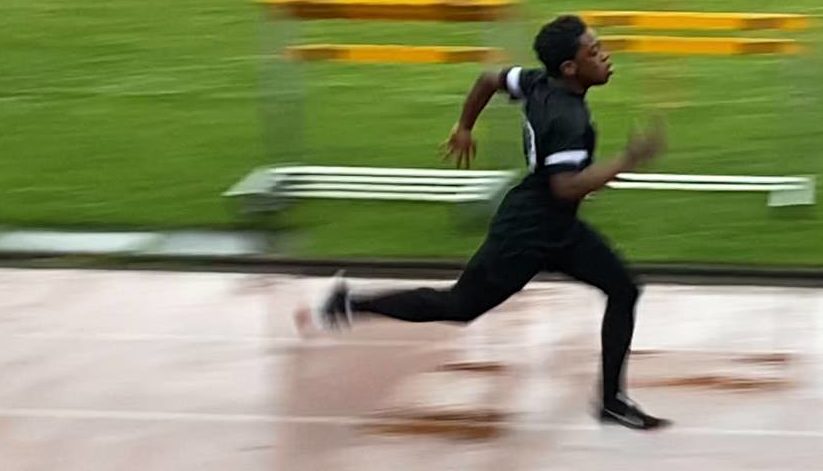 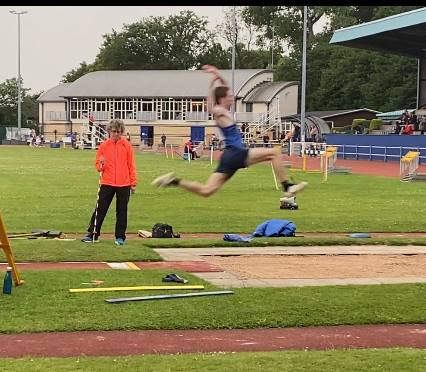 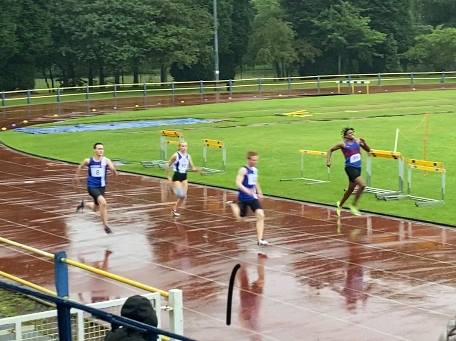 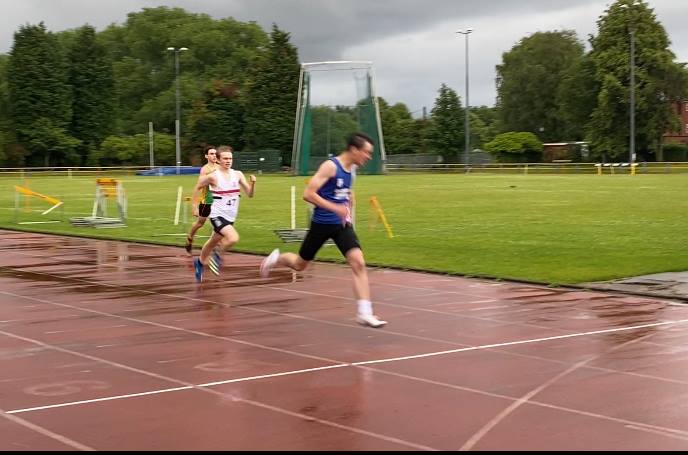 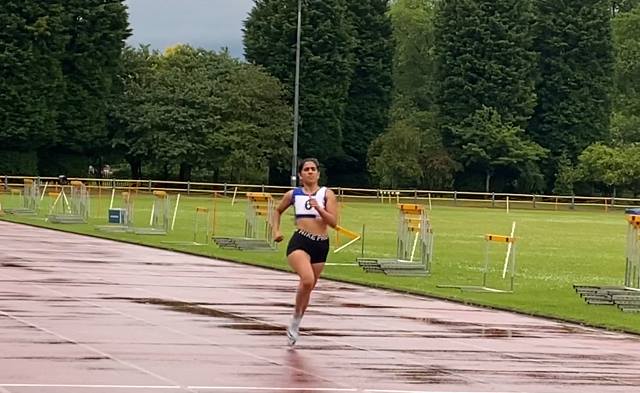 What do you have to do when entering and racing an Ironman? A Swim. A Bike Ride. A Run. The first three home in this years Race were three top professional athletes – Joe Skipper winning the event in 8hrs 42.59; Sam Laidlow in 2nd spot (8hrs 51.41) and Leon Chevalier in 3rd (8hrs 51.48).

SWIM  — ‘The two-loop 2.4 mile (3.8 km) swim course takes place at Pennington Flash Country Park, opened in 1981. The swim course has a triangle layout and athletes will head out before turning left twice and making their way back to the start’. Average water temperature 19° C. 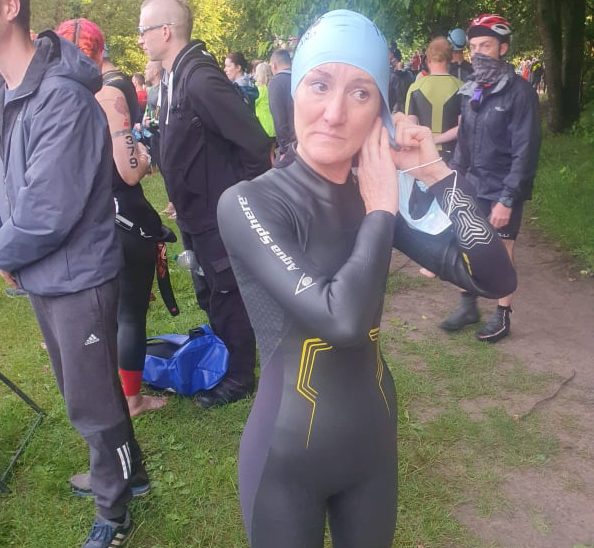 BIKE  — ‘The three-loop 112 mile (180.2 km) bike course runs in an anti-clockwise direction. Athletes will travel from Pennington Flash to Bolton for the first few miles, before taking on the three-loop bike course. The course continues through the northern countryside, past Black Dog Pub before reaching the famous Sheephouse Lane’. Described as ‘Hilly’. 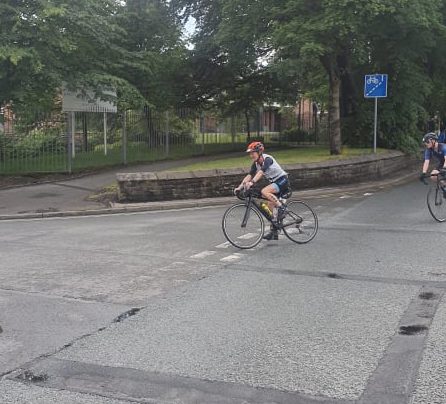 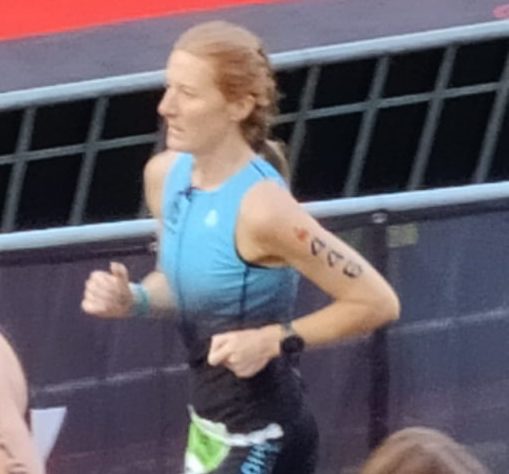 Blackburn Harriers V45 Janine Fallon also took on the Race recording a swim time of 1hr 30.54, Bike ride time of 8hr 40.12 and a Marathon straight off the bike in 4.47.54 to come home with a combined time of 15hr 22.55. What an achievement! When she had a moment following the race and some recovery, Janine shared her thoughts about the day with the Club “Well covid may have put pay to Ironman 2020 but we got the go ahead for 2021… Swim was a better time than 2018 albeit not as much training in the water due to restrictions, so on to the bike, Ironman uk decided to make it the toughest course and I can certainly say it is with over 8000ft of climbing over the 112 miles it certainly does not help when the rain came down, but with great support all the way round from Joanne Nelson shouting me on it makes you dig in and get the job done… The Marathon started off well but by half way my time was slipping, I had nothing left just grit and determination got me over the line in 15:22 a long hard day. But I am an Ironman!!!

Eighty one runners started this 10k Beach Race at Blackpool which was won by Blackburn Harriers Chris Walton in a time of 40.59 with Ross Uthank in 2nd spot (41.42) and the evergreen V60 Paul Muller in 3rd (41.59). 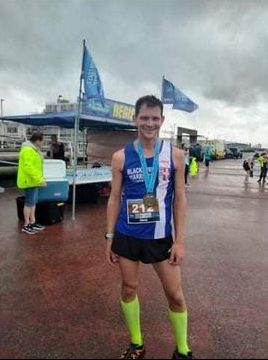 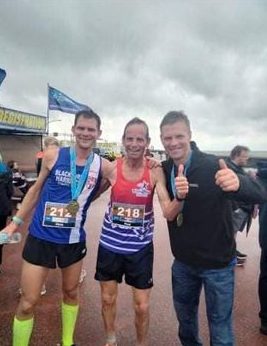