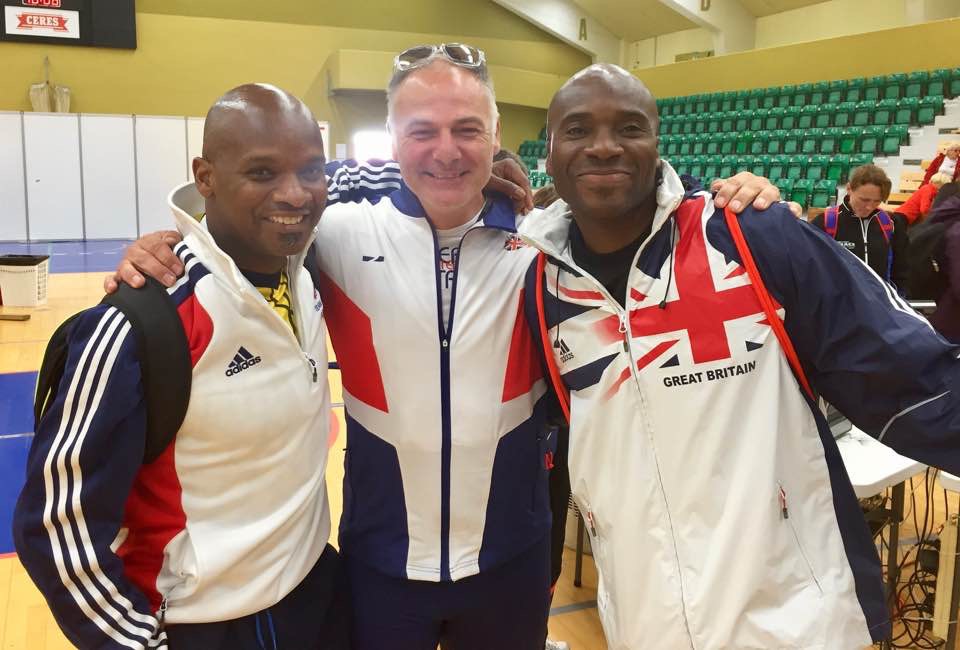 V50 Tony Balko had targeted this years European Masters Athletics Championships in Denmark in the Throwing Pentathlon M50 Age Category. Setting a new Shot Putt personal best and throwing a seasons best in the Hammer were among his highlights as he finished 13th out of the twenty six athletes in his Age Group with a total of 2600 points. Tony’s next international target are the World Masters Championships in 2018. 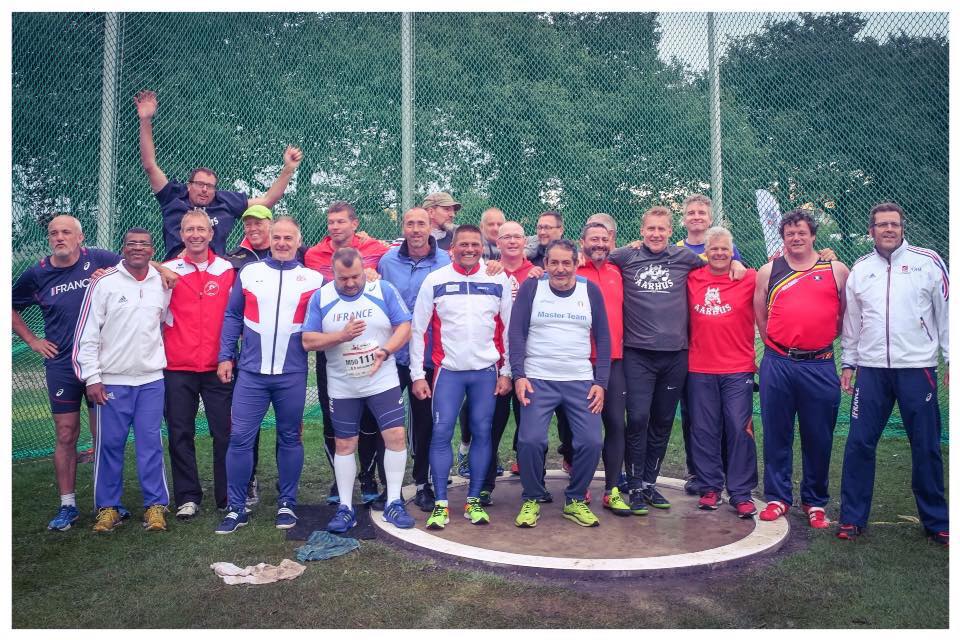 (Tony Balko 4th from left in the front row)

After the Championships Tony reflected on the weekends events telling the Club that the Championships for him were “Good, not great, but definitely with more to come. My first outing in a Great Britain Masters vest at the European Masters Athletics Championships (EMACS) 2017 in Aarhus, Denmark was on the whole a very enjoyable experience. 2017 and the preparation leading up to the EMACS had not been a great year due a number of injuries, particularly an annoying knee ligament issue. So in reality expectations of a great performance were relatively low. However, post Throws Pentathlon event completion I was content to manage a creditable 13th place (out of 26 participating athletes) with a points total of 2680. To be honest if someone had offered me a mid table finishing position at the beginning of the Championships (reflecting on the injury issues), I’d have gladly taken it. What was particularly pleasing was a SB of 36m 98cm in the Hammer and a new PB of 10m 26cm in the Shot Putt. Performances in the Discus (34m 90cm), Javelin (29m 39cm) and Weight (11m 23cm) were on par seasonal averages. However competing in cold, very wet and windy conditions didn’t make it easy, but to be fair it was the same conditions for all athletes. The intention now is to see out the remainder of the 2017 season, then have surgery on the right knee to replace a torn Anterior Cruciate Ligament (ACL), complete the six months mandatory rehabilitation, then hopefully be a better in a position to prepare properly for the World Masters Championships, Malaga in September 2018. I’d just like to say a big thanks to all Blackburn Harriers team mates, coaches and club management for your kind support”. 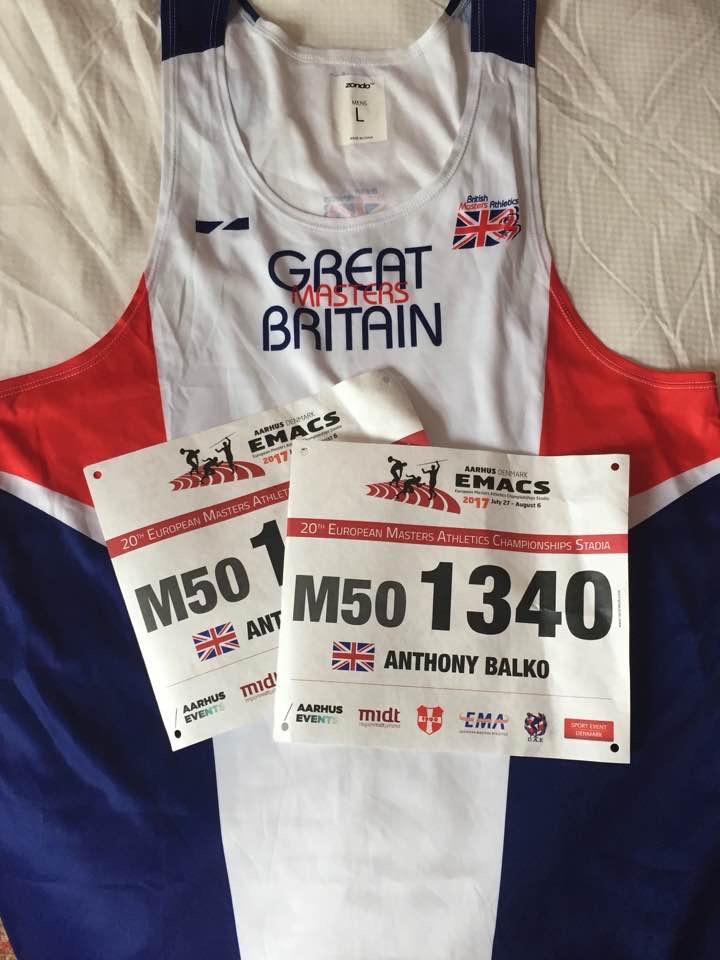 Five hundred and five finishers in this 5k Race known for its quality fields at the front end and fast course. The Race was won in a time of 14.26 (Mohammad Abu-Rezeq) with the first five all going under 15 minutes.

Tim Raynes and Joe Monk were in the race for Blackburn Harriers both looking for new personal bests over the distance. Tim finished in 8th place – 15.08 – just four seconds away from a PB and commented to the Club that he “Wasn’t quite sure what to expect tonight, just wanted to have one more decent shot at a 5k this summer. In the end, I was pretty pleased with my run (despite being a little over 15 again). My first mile was pretty quick and then I slowed over the next two, but was able to pull it together and finish fairly strongly. Looking forward to rounding off the track season now with a few more races over shorter distances.” 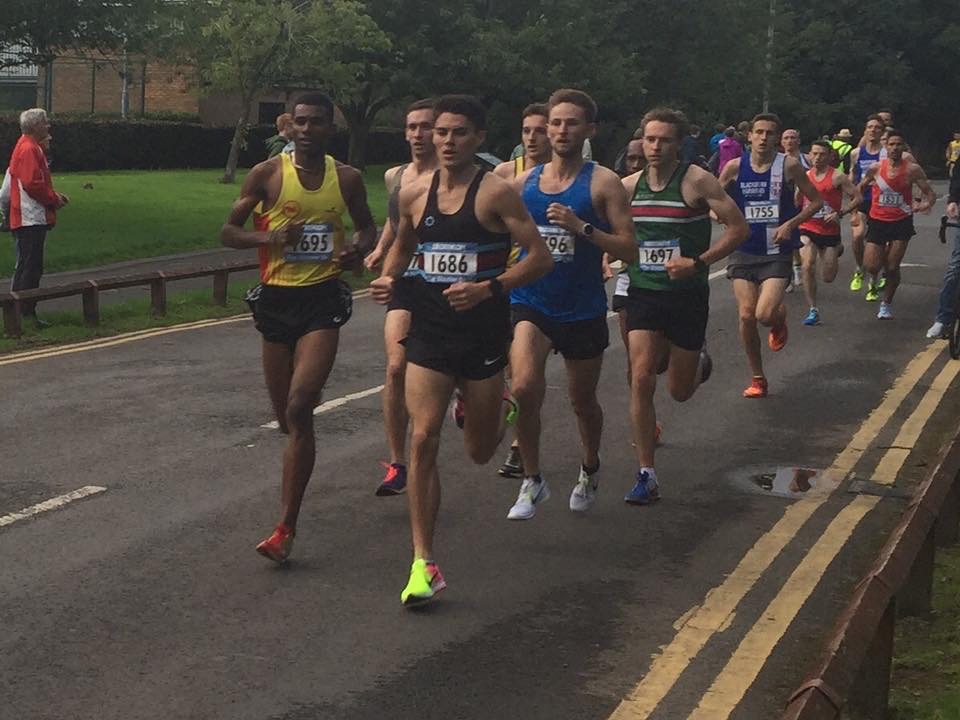 Joe Monk was just two seconds outside of his previous best finishing in 12th spot – 15.20 – and won the 1st Junior Man prize too. When speaking to the Club after the Race Joe told us he was “really pleased with run and a massive confidence boost after a few poor runs of late. I think that was arguably my best run over 5k given the course is quite twisty, doing mid Cheshire 5k at the end of August were 15:10 should be a realistic target”. 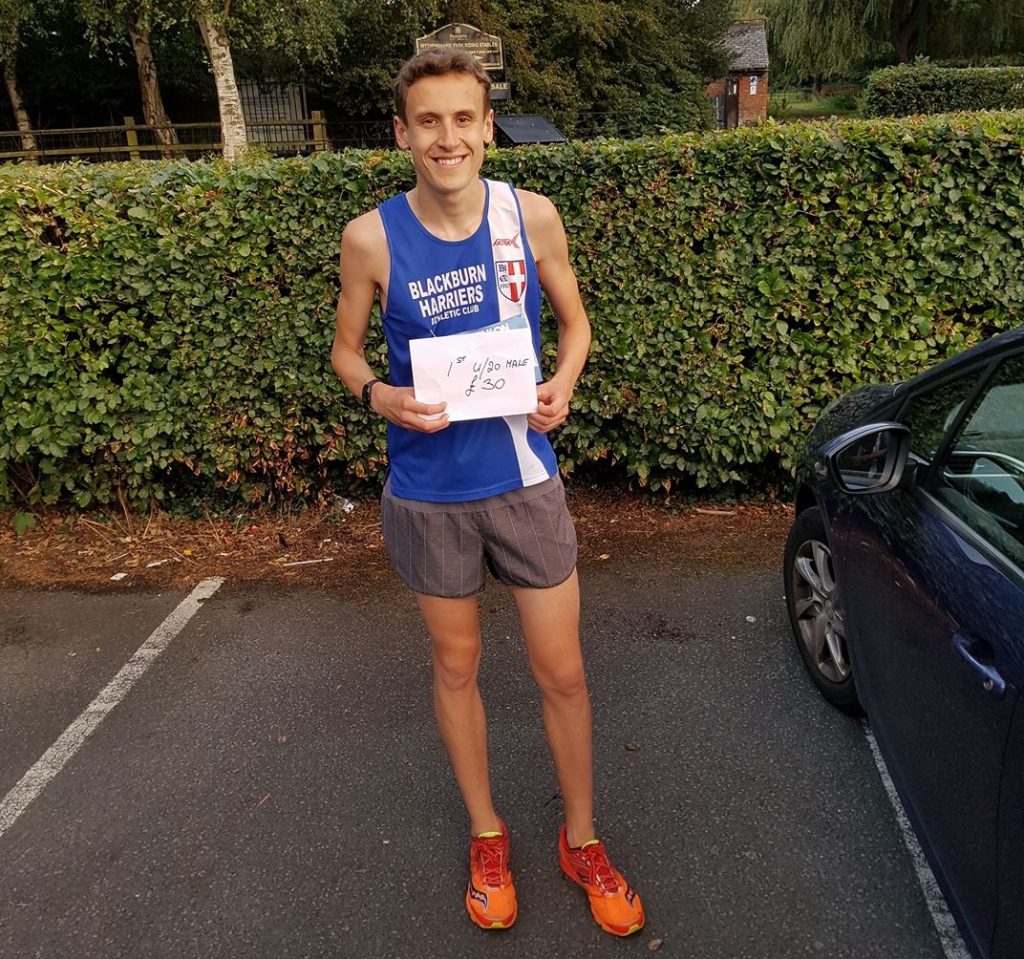 V45 Andy Buttery is back on song after suffering what he described as ‘his worst running injury year ever’. Having not raced from November 2016 through to June 2017 he was obviously a bit rusty! However on June 16th on his first Race back in the Podium 5k he ran 17.28 (20th) followed by another 5k at Todmorden on June 22nd posting a time of 17.56 (10th). On to July and at Liverpool on the 14th he ran the Knowsley Harriers Summer Fab 4 with a 22.49 clocking in 9th place overall and won the V45 prize on the night. His most recent race came at Lancaster on July 29th in the 3-1-5 Lancaster 5k Series where he again won the V45 age category, running a time of 17.23 in 19th position.

The Worsthorne Moor Race featuring one hundred and forty seven runners was the latest in this years Burnley & Pendle Grand Prix Series which took place on Sunday August 6th and saw Blackburn Harrier – Shaun Livesey – cement his 3rd place overall in the Series standings and 1st in the V40 Age Category with a 5th placed time of 43.05 – the race being won by Tom Cornthwaite in 39.05. 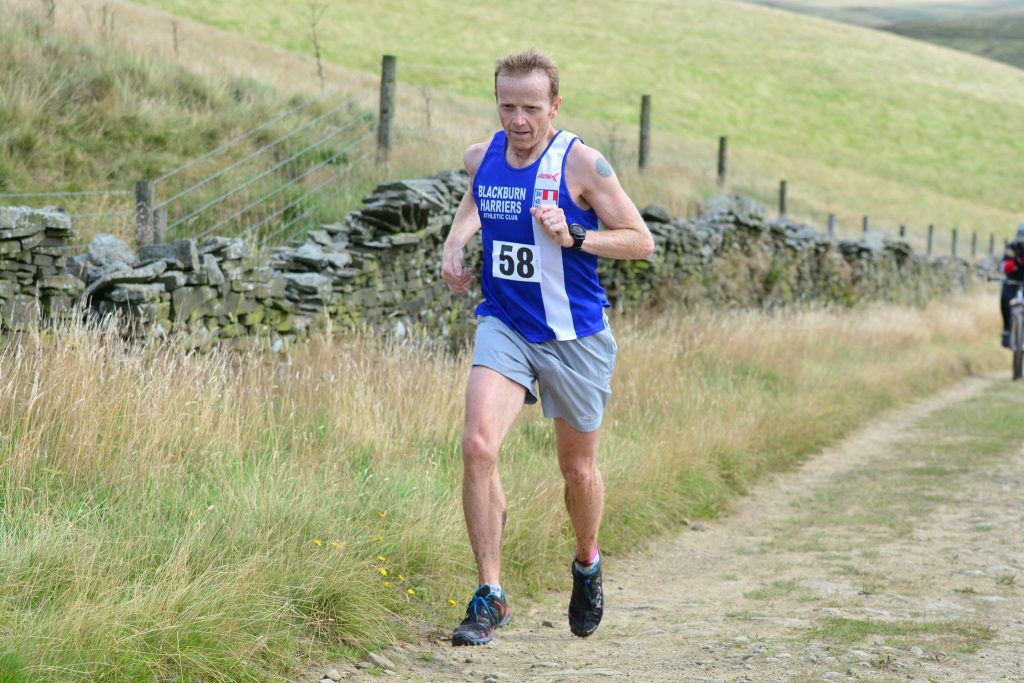 To take wins in a Series like this requires consistency of performance and is exactly what Shaun has delivered – speaking to the Club about the Series and his ambitions for himself Shaun told us “It wasn’t until the first two races had been run did I decide to give the Grand Prix series a go, and try to win the vet 40 category. My series didn’t start well with a poor run at Whoolan Nook placing 17th. Over the next half dozen races I didn’t do any worse than 7th which was good. Next up was Hendon Brook which I had been targeting. Having run it twice before and finishing 2nd and 4th I was confident on running well again. I was pleased to finish 2nd and run a pb on that course. I backed up that run with 3rd at the Townley 10km. With a 6th place at the Greenway 5km and a 5th at Worsthorne this weekend I knew I had secured the vet 40 prize. Making it 3 years on the trot for Blackburn Harriers vets, Andy Buttery 2015, Chris Davies 2016. Also barring a freak result at the last race, I have also secured 3rd place overall. So all in all really pleased”.

Felix Thompson ran in the U9 Junior Races which was a 1k field lap. He was really motivated and determined to try and win it as he is currently 2nd the in standings overall with just one race left to go. And win it he did in a time of 4.03 – just one second ahead of Callum Singleton (Trawden) who clocked 4.04 in 2nd with Harry Jorden (Trawden) in 3rd also running 4.04. Great race between the youngsters. 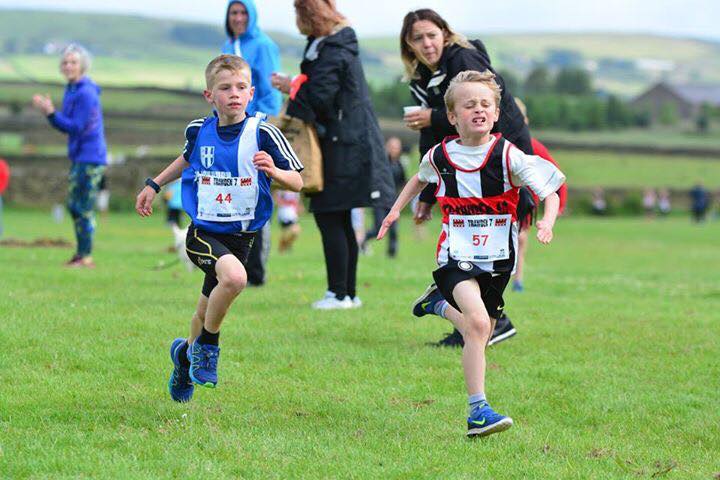