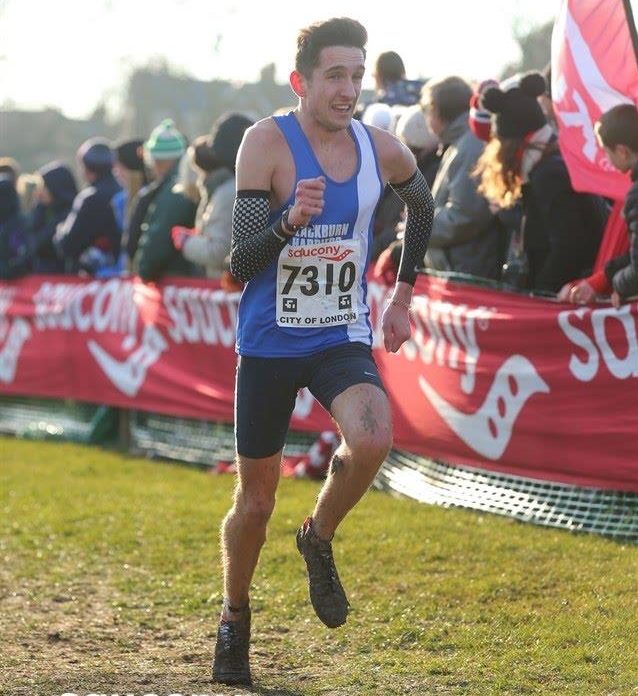 Turned out be a very good day for the Harriers at this years National Cross Championships on the iconic course at Parliament Hill in Hampstead and highlighted by top 30 individual finishes in the Men’s Senior and U15 Boys Races. 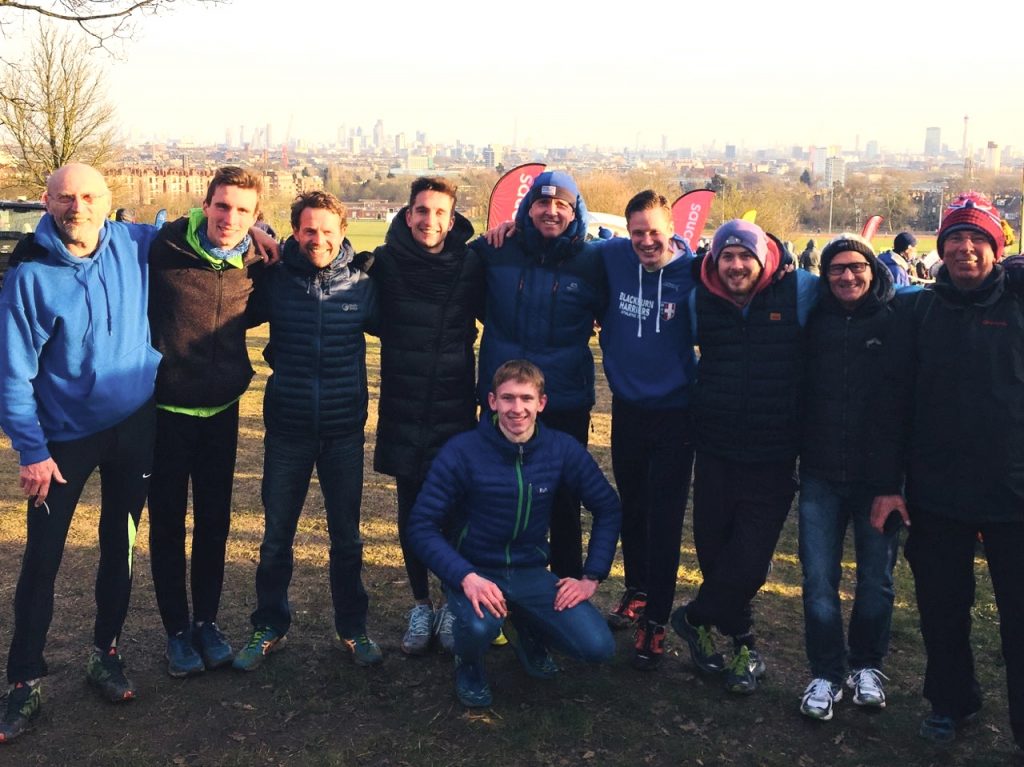 Rob Warner started off the year with a 4th place in the Lancashire County Championships before finishing in 39th spot at the Northern Championships in Leeds at the end of the month. He followed that up with a tremendous run in the Nationals to finish 27th overall in a time of 41.41, one of his best races ever over cross country as he commented to the Club after the Race had ended saying that it had been ”Great day down at parliament hill with the lads, was such a great team atmosphere and everyone had really strong runs! Always enjoy nationals as it’s usually the biggest field of any race in the year so it makes for a class atmosphere. On a personal note, I would have to rank this as the best race of my life so far! My plan was to go off pretty hard up the first hill and try not to fall away too badly, and thankfully I didn’t and felt as though I finished quite strongly actually. Was a massive surprise as the cross season hasn’t been that great for me so far, so I was thinking that a best possible result would be to sneak in the top 50 so over the moon to get into the top 30! Well done to all the lads again, some great results from the guys!”

Ben Fish got boxed in at the start and was somewhere around the 200’s as he tried to get clear. George Woodburn said that Ben finished like a train as he passed loads of athletes to take a fantastic 48th place, clocking 42.20. Ben was delighted with his run as he told the Club ”wow what a run by the team. Superb run by Rob for top 30, incredible stuff! I was happy with my result, 48th is my highest finish since a good few years ago. Got off to a poor start but came through well. 22nd place for the club is some achievement, great team effort!” 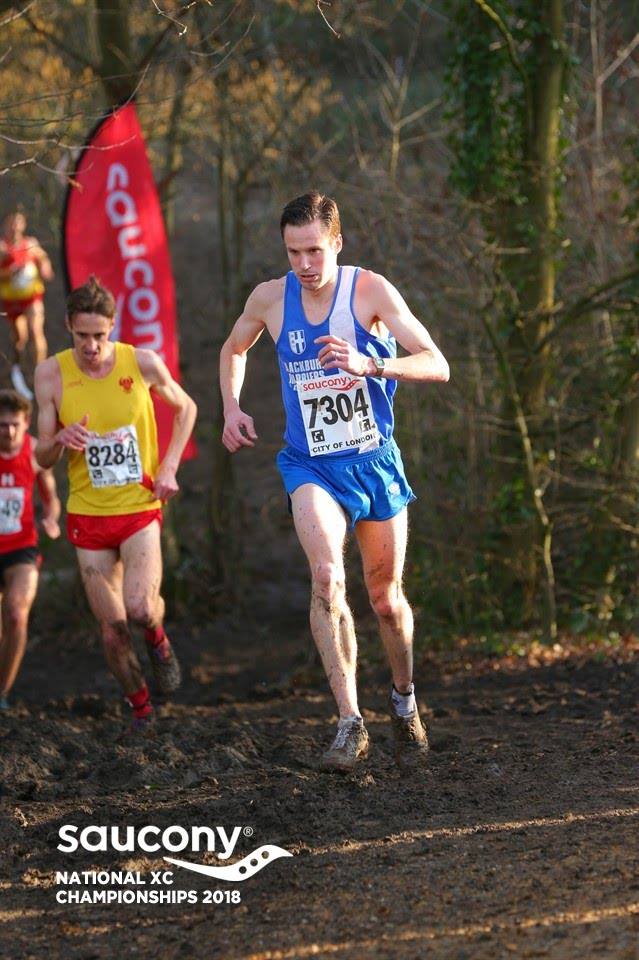 Tim Raynes has had a great 2017 setting new personal bests at everything from 800m through to 10k and has carried on in 2018 in the same vein, just missing out on a top 100 finish by one place as he came home in 101st posting a time of 43.25. At the end of the days events, Tim spoke to the Harriers saying ”It’s been a great weekend down in London, don’t think anything can quite top the atmosphere at the National XC. Particular well done to Rob for a phenomenal run, backed up well by Ben after a tricky start. On a personal note, managed to get a good start and have an ok run … disappointing to just miss out on the top 100 though! Great result to be 22nd team, rounding off some consistently solid XC team results this season. Bring on the relays!” 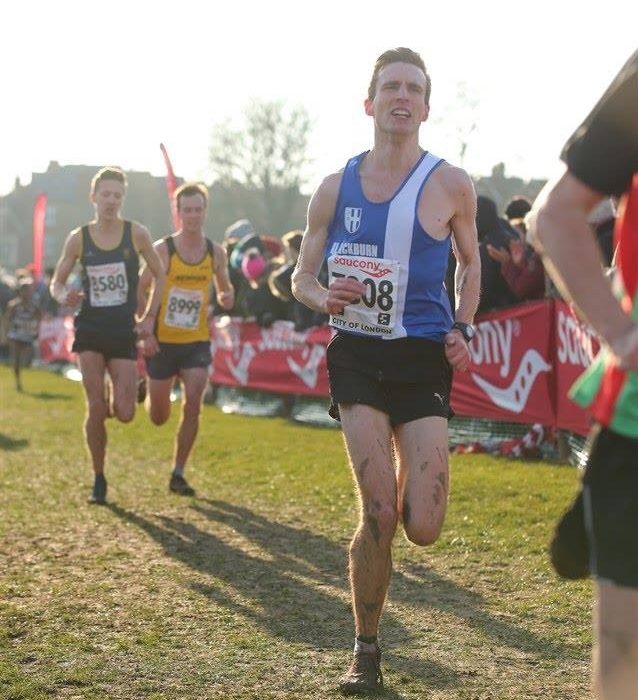 Jack Hindle who had a very good run at the Northerns in Leeds in January and part of the Men’s Senior Team who won the local Red Rose League Title, was next home for the Harriers with another very good run as he came home in a time of 44.31 in 153rd place. Jack was really pleased with his run and the way that all the Harriers had performed, commenting that it had been ”a fantastic day out for Blackburn Harriers. Impressive runs from the U15 boys to start the day off and then for Rob and Ben to both be in the top 50, shows our quality. Well done to all the lads on their runs. A fantastic atmosphere and great team spirit. It’s rounded off what has been one of our best ever Senior Men’s XC seasons”. 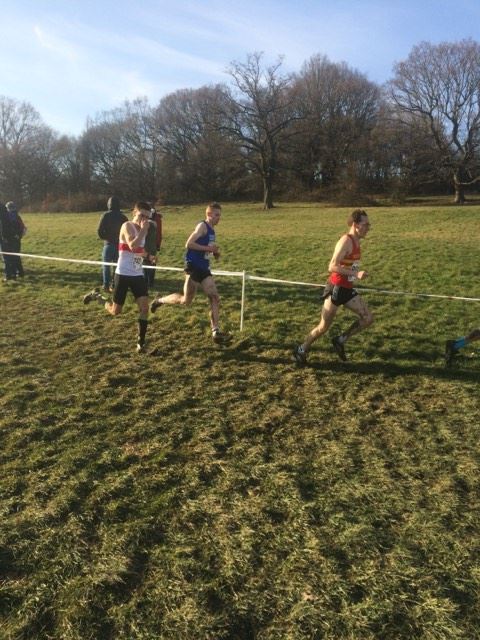 With a time of 48.54, Mat Nuttall was the Club’s 5th counter in 492nd spot with Senior Men’s Team Captain Paul Guinan in 739th place clocking a time of 51.24. Paul reflected on his first season as Team Captain and the days events, telling the Club “What a great way to end the XC Season, a truly iconic race with racing conditions near perfect, what an effort by all, finishing 22nd team is impressive. Rob W confirming he ran the race of his life finishing 27th is fantastic, thanks to all the team for a great season and I get the feeling things are going to get even better, finally having George, Karl & Evan here really did put the icing on the cake, a brilliant weekend”. V60 John Chaplin was the final runner home for the Club with a time of 61.22 in 1703rd. Katie Buckingham who is having a very good cross country season, ran for the first time in the Senior Women’s race featuring one hundred and twelve Clubs and eleven hundred and thirteen finishers, coming home in an impressive 193rd spot with a time of 35.32. Katie said she “Really enjoyed my first senior nationals, it’s a great experience to be in such a huge field. All the mud churned up by earlier races and the endless 8k of hills made for some difficult running – I can see why people call it a love hate course! Shame about the lack of women but a great shift by all the guys”. 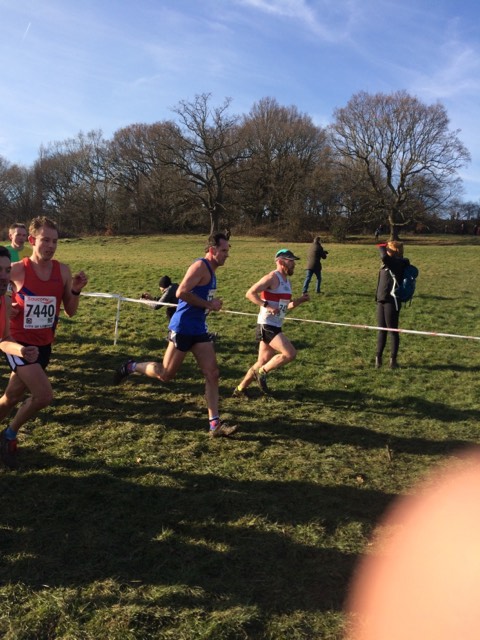 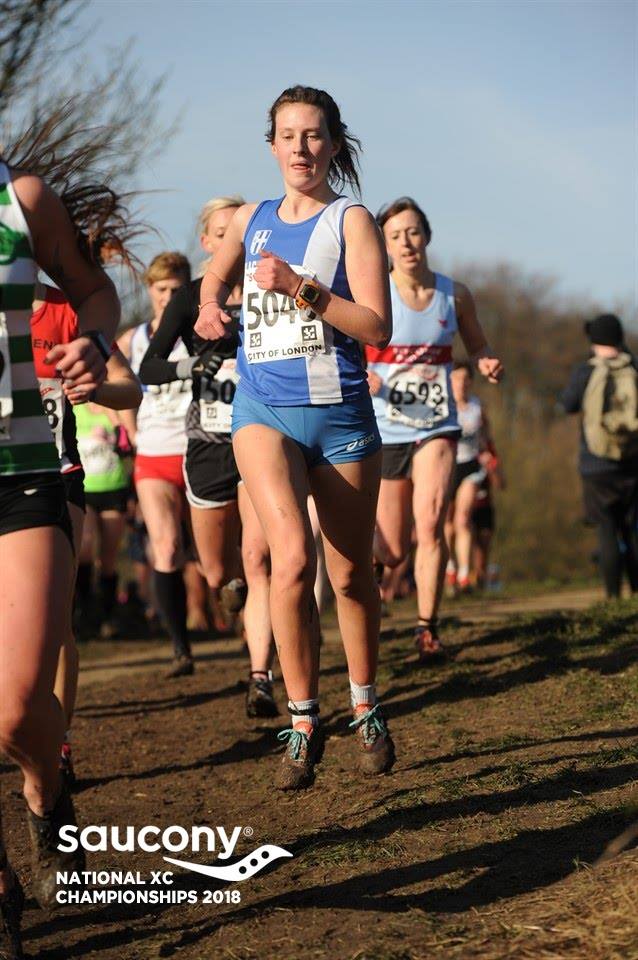 Less than twenty four hours after ‘finishing like a train’ at the National Cross Country Championships, Ben Fish ran the Thorpe Half-Marathon along with seventeen hundred and sixty two other runners winning it in a time of 69.06 – a minute and a half in front of the second placed athlete, Kojo Kyereme and Russell Bentley in 3rd.

Ben is an On Ambassador and ran the Race as part of their programme commenting after the weekend that he “just went into the race with an open mind. I figured if I ran hard on heavy legs it would be a good indicator to a halfway split for the marathon. Good event and I pulled away from fellow On Ambassador Kojo Kereme after 5 miles to win by just over a minute”.

After winning Bronze at the Northern Cross Country Championships in January, the U15 Boys team of Matt Ramsden, Sam Hodkinson, Harry Wilkin, Jamie Teare and Leon Thomas went to the Nationals confident of another good performance. The Race featured 52 Teams and 504 four athletes which saw the Harriers finish 10th Team overall and 1st Northern Club which was a great result. 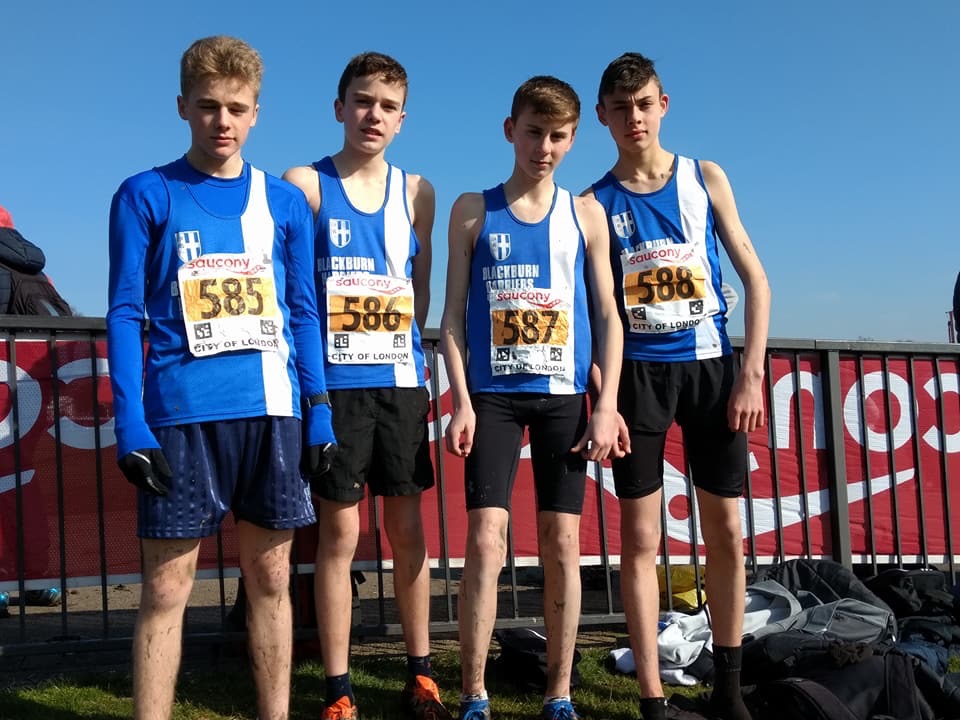 Matt Ramsden who had lost a month of training at the Christmas period is getting back into his stride, had a tremendous run to place 27th overall in a time of 16.17 and just six seconds away from claiming a top twenty place. Just eight seconds behind, Sam Hodkinson also had a cracking run to come home in 34th place in a time of 16.25 commenting that it had been “An amazing experience and a great day of running. We are all pleased with how we ran and are hoping to keep this up for upcoming events.” Next home came Jamie Teare in 186th place with a time of 17.51 with Leon Thomas close behind by one second in 189th (17.52). Harry Wilkin clocked a time of 19.58 to cross the line in 410th position. After the Race Jamie told the Club that it had been “Great conditions for the race.  Enjoyed it even though the start took a lot out of me.  Glad the team did well, Top 10 and also the highest placed Northern team!  Well done to all the Harriers that competed” whilst Harry commented that it had been a “great venue to run at and I’m pleased with a strong finish considering I’ve been out of training for a short while”. 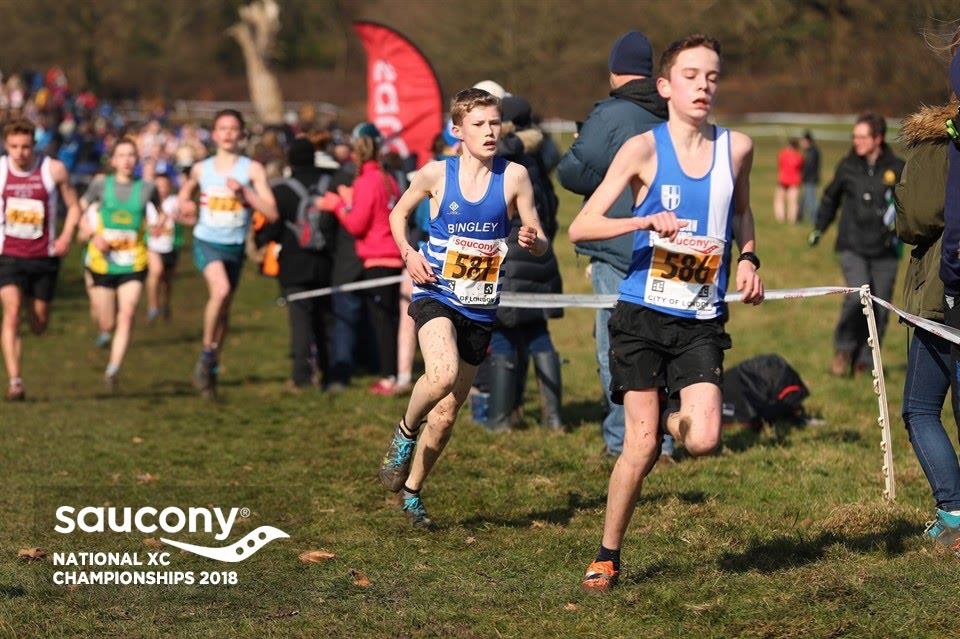 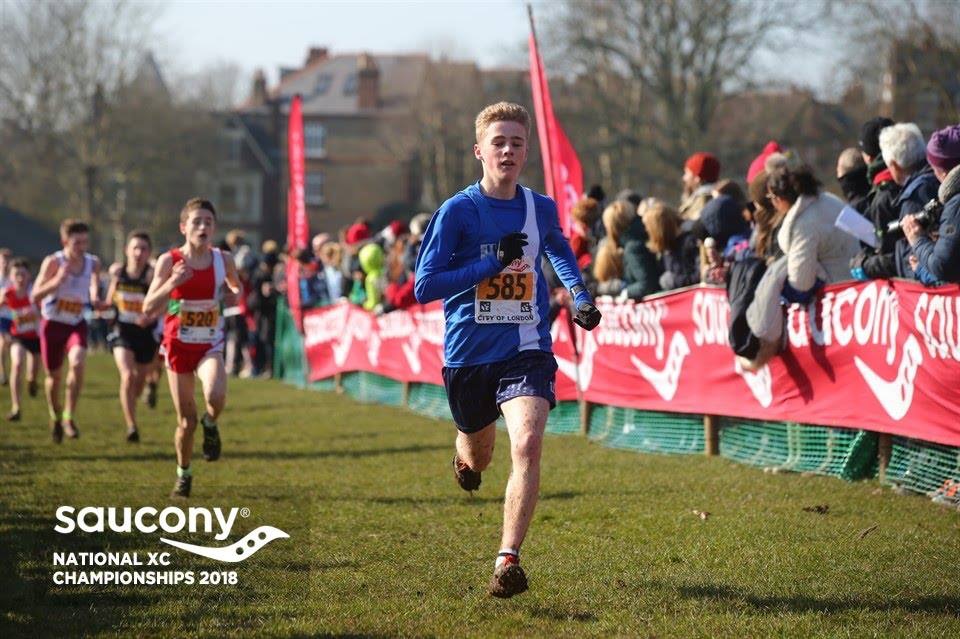 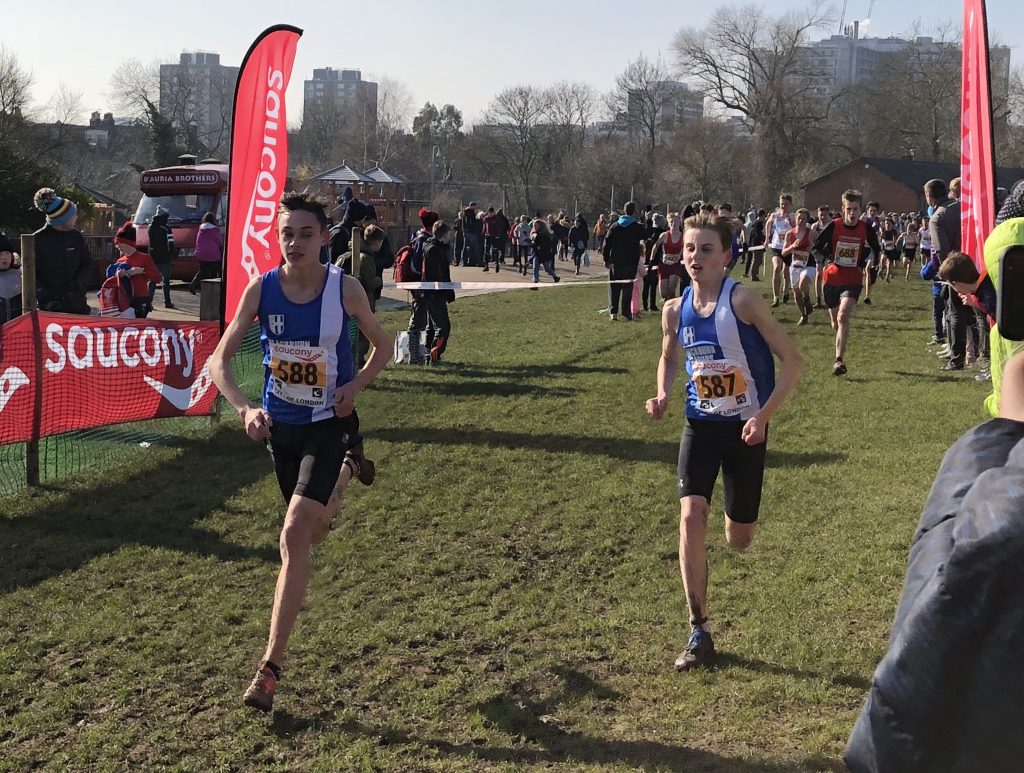 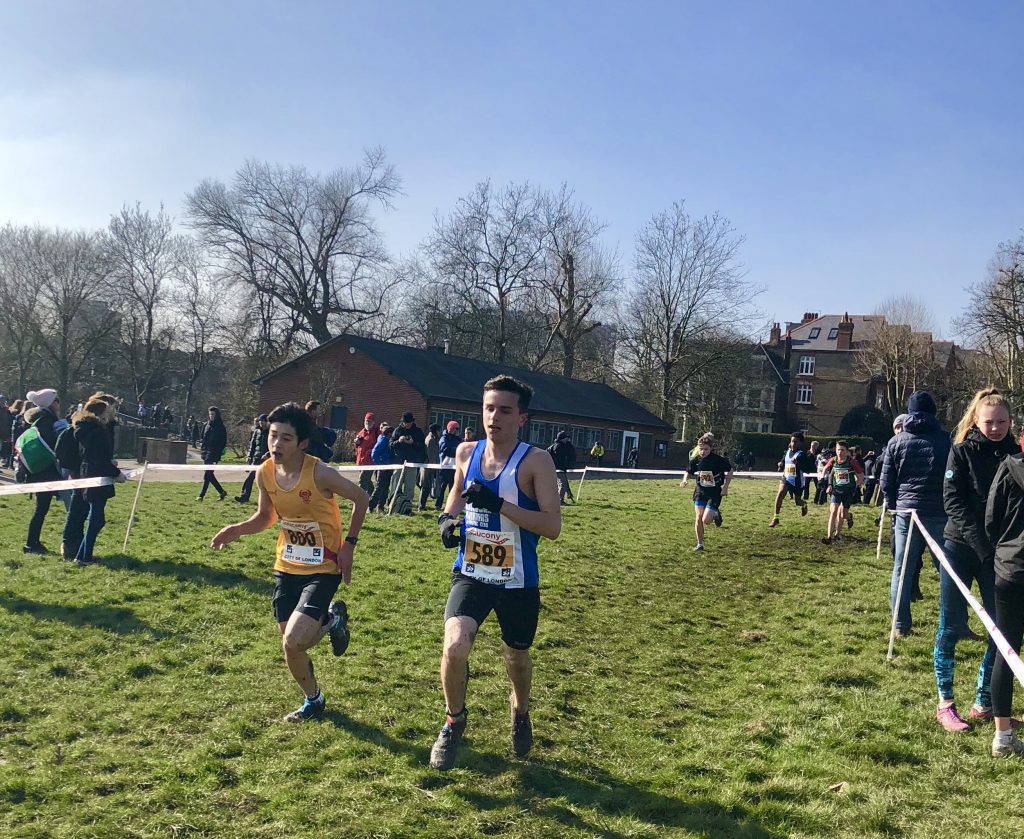 The ever popular Lostock 6 took place on Sunday February 25th attracting three hundred and forty two runners in a Race which was won by Jonathon Kay in 29.57. Ben Costello who had hist first ever race for the Harriers in October 2016 has really progressed in the eighteen months since and his latest outing demonstrated that with a 7th place finish, clocking 32.47. (RESULTS) Ben was pleased with his run and told the Club ”With having Trafford 10k next week I just needed a race to see where I am at and what type of shape I am in. Judging from todays performance i am in good shape again after a few bad months of running and training not quite going to plan. Glad to be back running pain free and it’s time for me to proper push on this year now”. Good to see V50 Martin Kerry out in this race too as he finished in 80th place with a time of 42.09 along with V50 David Morris who came home in 320th (61.54).

Pauline Powell travelled down to Wrexham and ran the Half-Marathon there which featured two thousand two hundred and eighty seven runners. Pauline had a great run, finishing 3rd woman behind much younger athletes Sophie Cowper from Rotherham (1st in 77.25) and Laura Riches from Leigh (2nd in 81.10). Wrexham Results 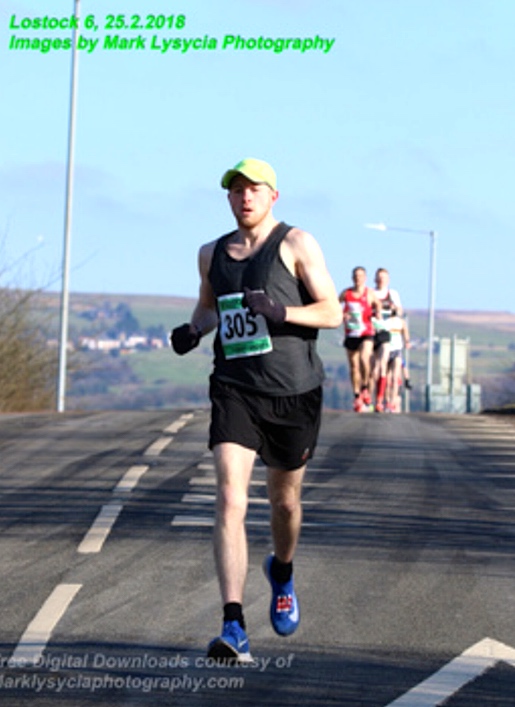 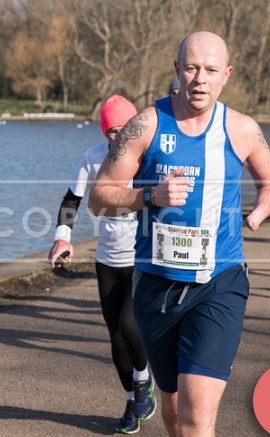 Four Blackburn Harriers went to the latest fixture in the Sale Harriers Winter Indoor Series, all held at Sportscity and came back after contesting six events with five new personal bests.

U17 Aysha Karolia  set new personal best in the 60m placing 5th in a time of 9.01, down from her 9.05 clocking at the previous fixture and made it a double new PB on the day by three tenths, running a time of 29.54 in the 200m to finish in 2nd spot. Solomon Brown (U20) also ran the 200m to post a massive new PB of 25.32, placing 3rd in the race. U15 Ben Boocock continues to improve his times over the Winter Indoor Series with his latest outing in the 60m Hurdles saw him come home in 3rd position with a new PB time of 9.93 – down from his previous best of 9.98. U15 Myah Booth won her 60m Hurdle Race in a new personal best time of 9.57 and then went on to take 2nd in the Shot out of fourteen athletes, throwing 9.40m.