Weekend at Trafford is a good one for Blackburn athletes, with Wins and PB’s – Wins for Chris & Victoria at Blackpool 10k – On the Trails with Keith & Oli 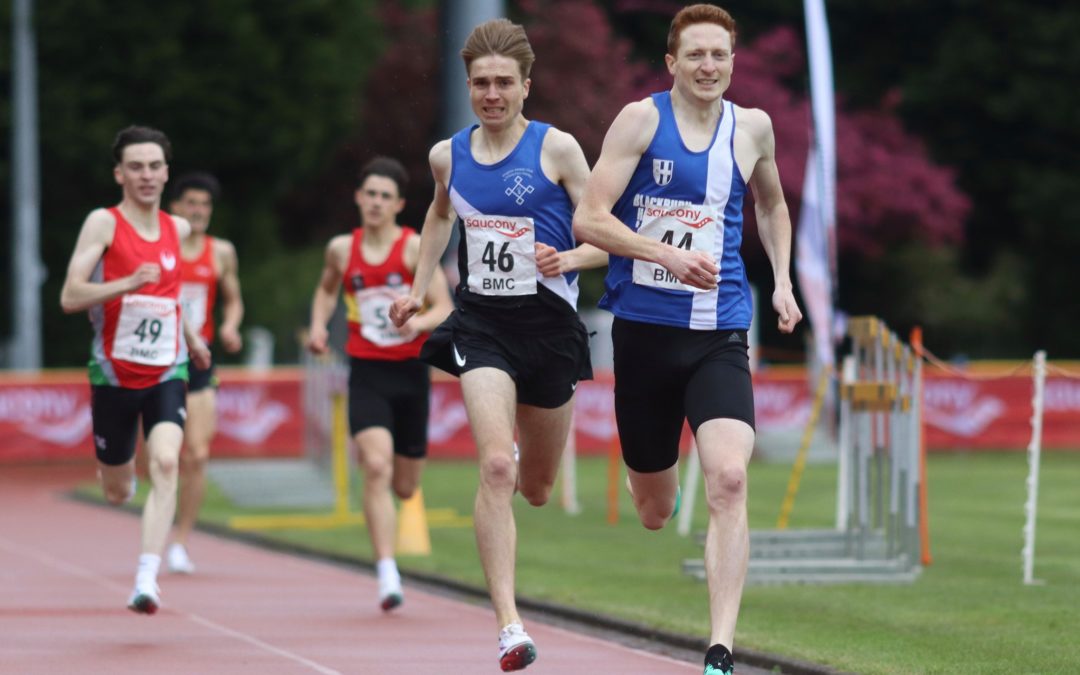 A weekend of athletics took place at Trafford over the weekend of May 8th and 9th with the BMC Grand Prix taking front stage on Saturday and the Senior Open meeting on Sunday. On Saturday the Harriers had three athletes competing – Dominic Walton in the 800m, Abigail Stratton in the 1500m and Callum Davidson in the 5000m. Safe to say that the weather conditions weren’t the best, but after so long without competition, athletes were more than happy to get on with it.

Dominic Walton last raced on the Track in August 2019 with his last run over 800m in June 2019 and has had to endure a series of injuries that have impacted his training in that time. On Saturday he won his Heat in a time of 1.51.34 to kick off his 2021 season in good style commenting after his race that “After 2 years of injuries I’m so happy to be back racing despite how anxious I felt going into it. The actual race itself was really choppy, I lost momentum 2 or 3 times from all the pushing, but I never expected to feel as comfortable as I did for the first 600m. When I took the lead with 150m to go the lactic suddenly hit so I’m grateful to have got the win. With a bit more strength work and hopefully building my endurance now I’m managing to train properly again, I’m going to be pushing for 1:48 this year”. 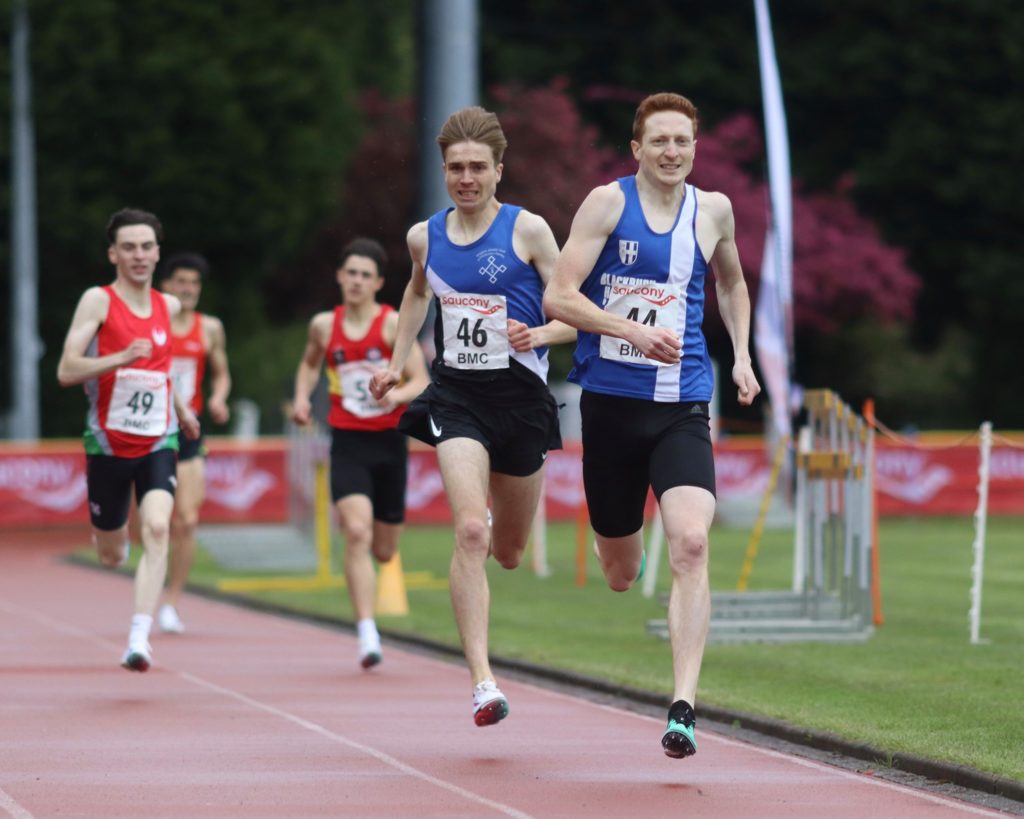 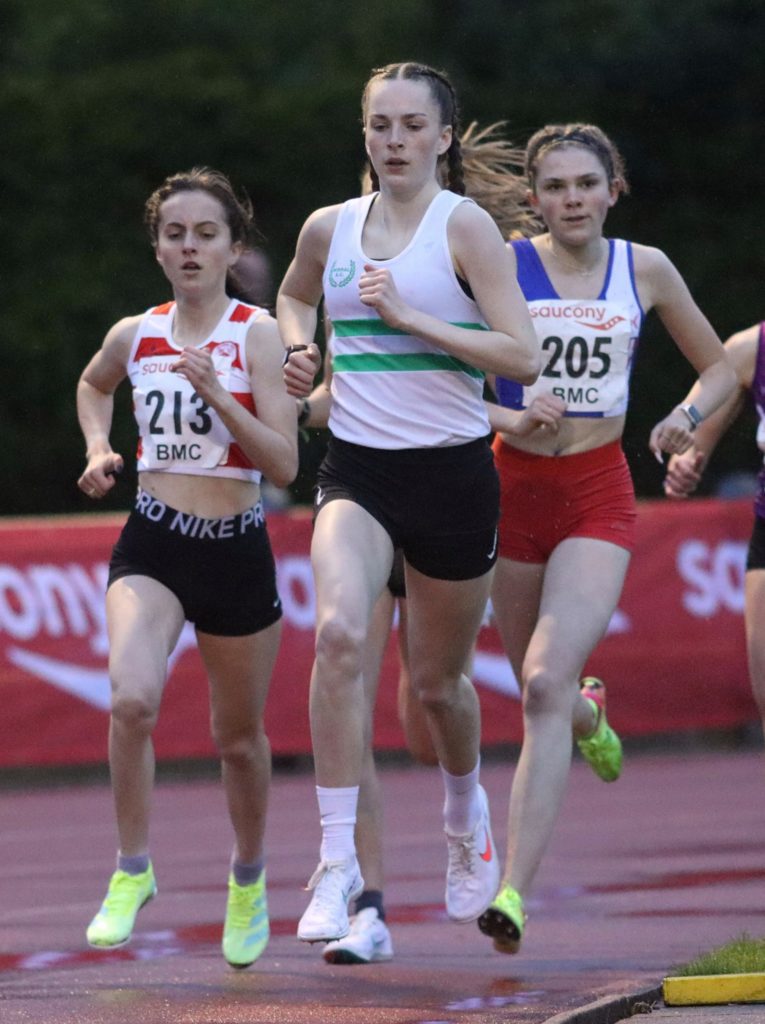 Callum Davidson is in good form as the season starts to develop. Callum has already reduced his 5k road time to 14.28 at the Mid-Chesire 5k on April 30th and his appearance here at the Trafford BMC 5000m was his first outing on the Track since May 12th 2018. His Heat contained 16 athletes in which, Callum placed 3rd in a new PB time of 14.39.06, well over half a minute quicker than his previous best time of 15.13.50. There is little doubt that we are going to see much more of Callum on the Track now and in the future. After his Race, he spoke to the Harriers saying that he “Thoroughly enjoyed my first track race in a few years. Very testing conditions but it’s the same for everyone. Went with the pace and covered the moves but didn’t have the snap in the last km unusually. But it has solidified my road time and I’m excited for a summer on the track to knock some time off that!“. 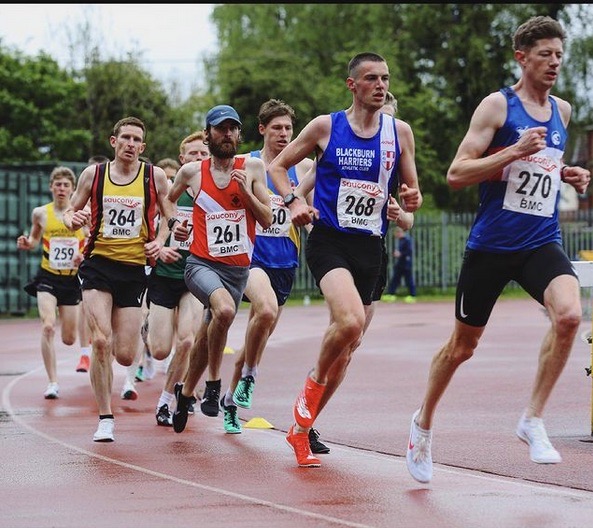 On Sunday it was the Open meeting at Trafford which also produced some excellent performances by Blackburn Harriers athletes. Bottom of age U17 Keira Haxton was tackling her first race since Augsut 2020 as she took on the 800m, clocking 2.34.33 in 2nd spot . 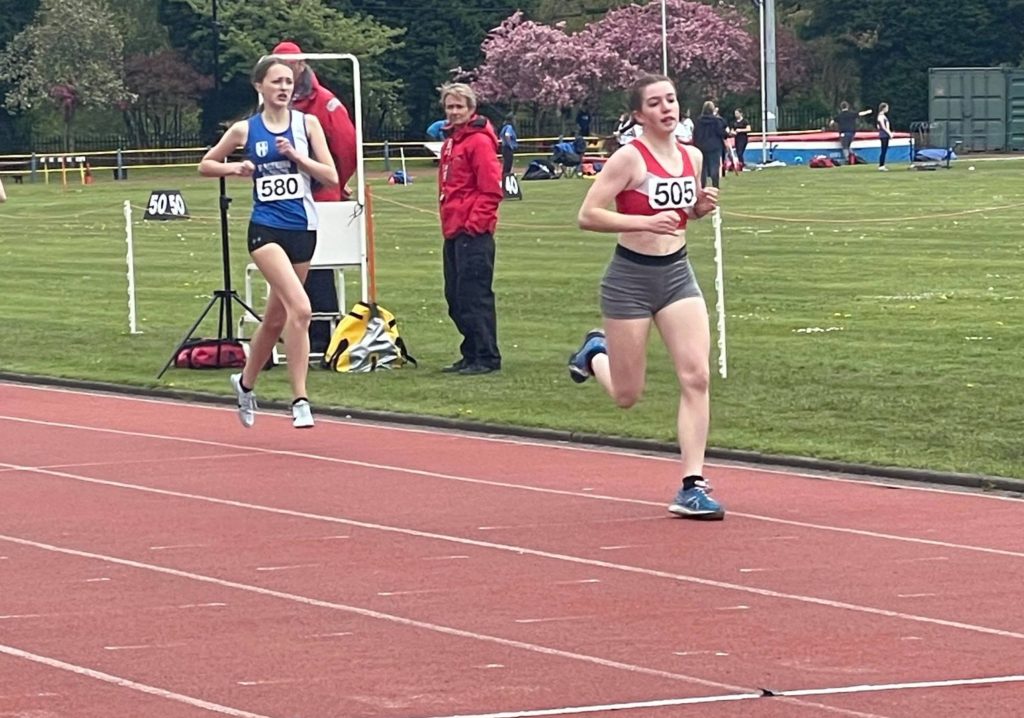 Another bottom of age U17 – Codie Dewhurst – was out in his second race of the season and again in the 800m. Going into the Race with a previous best of 2.26.37, he destroyed that time in winning his Heat in a new PB time of 2.15.44 – an improvement of nearly eleven seconds and afterwards he told the Club that it was the “First time since 2020 that i set off fast to keep with 1st on first lap so I could relax a little bit on last lap and had enough to sprint at the end. I think I’m slowly improving my sprint finish but it still needs work“. 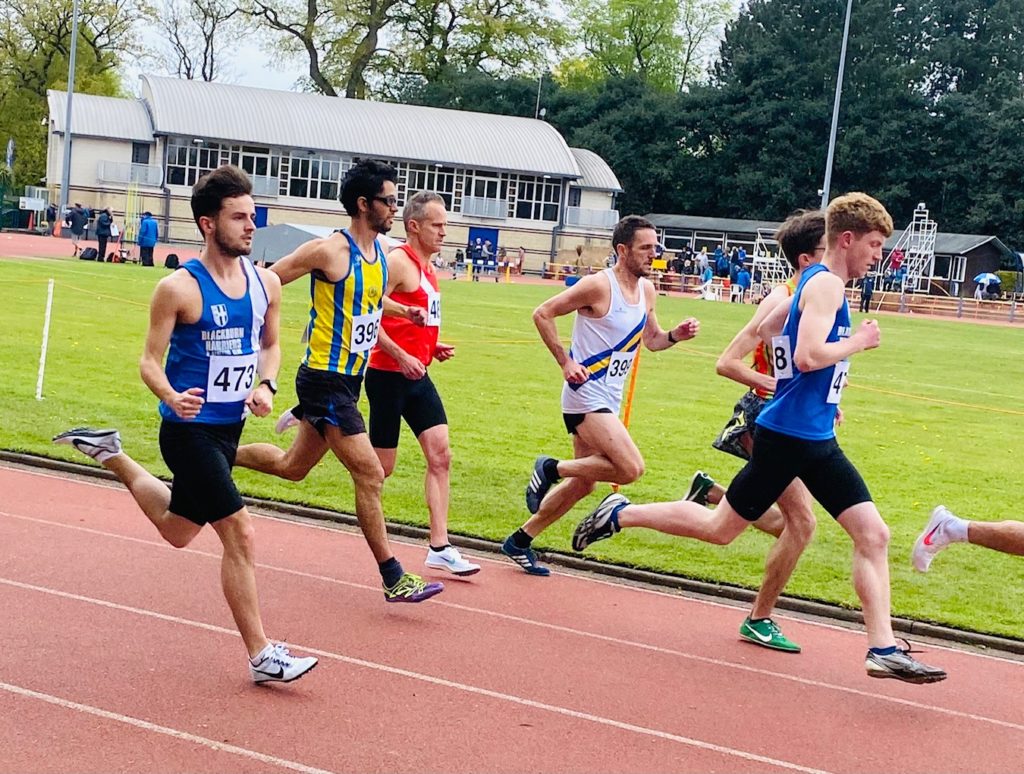 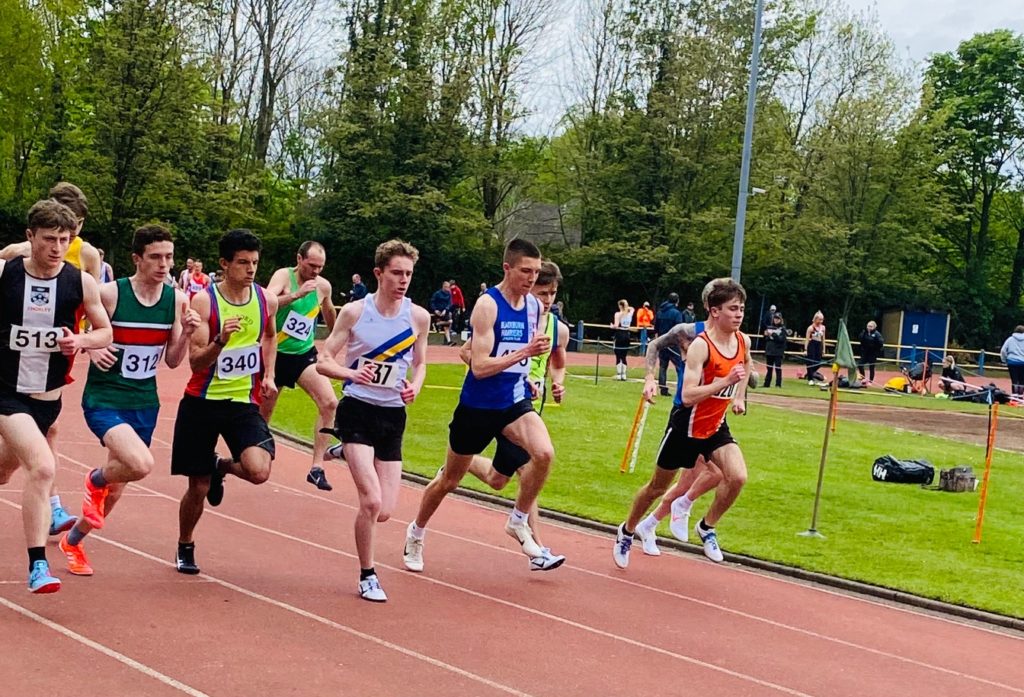 In the Field events bottom of age U20 Matthew Heywood went up to Hull on Saturday for their Open meeting, held in wet conditions. Matthew threw 43.99m for 3rd spot. The day after saw him at Trafford  where he was competing again in the Hammer (6kg) and this time, in better conditions, he set himself a big new PB in winning the event with a throw of 48.81m, an improvement of over three metres from his previous best. Second outing of the season for Senior Anna Peers – placing 3rd in the Discus with a throw of 35.45 and 2nd in the Javelin with a distance of 34.73m.

Matthew Heywood at Trafford May 9th

Out on the Road it was a double win for the Harriers at Blackpool as two hundred and sixty runners braved the wind to complete the 10k. Chris Walton won the race in a time of 37.10.63 which reflected the conditions with James Pattison in 2nd (38.18.25) and James Otto in 3rd (38.58.312).Speaking to the Club, Chris said that he “went into the race didn’t know what to expect as it’s Blackpool and it’s always windy conditions. I was in 2nd for the first mile and a half and on for a PB but as we turned at half way it went out the window. It was like a wind tunnel and just a case of hanging in I was made up to finish in first place. Well done to Victoria for coming 1st lady as well”.

Victoria Mousley – in her first year as a V40 – made it a  double win as she won the Women’s race, coming home in 12th spot in a time of 41.03.04, a position which also won her the First V40 Women’s Prize. After the race Victoria spoke to the Harriers about the day telling us “I was dreading the first face after 15 months of no racing and actually asked if i could postpone to a different event. I was expecting around 41 mins which is a far cry from the sub 40 that I have been used to for many years. I know I am a runner who can’t replicate race pace in training so needed a race as a kick up the bum. I loved the time trial start and would love races to keep this! I set off and just picked people off the whole way. No one overtook me and I kept picking off the next runner. The first 5km was fast and I passed 5km in around just under 19 and then we turned around into the wind! Haha this slowed me down massively and I had a stitch to contend with too – shock to the system racing again. I finished 1st lady and 1st V40 too. New category

. Great to see Chris Walton too and brilliant to see he finished first also. A great success for Harriers. My time was 41.03 which was ok considering the wind and on a decent course without the wind I’m confident sub 40 form will easily return.

Keith Gill and son U15 Oliver Gill went off road on Saturday  in the Lakeland Trails Series. Running in the U16 category age group in the Race, Oliver had a very good run, finishing 2nd overall in a time of 27.48 and first U16 as Keith (V50) placed 7th over all in a time of 32.25 and was also first in his age category. After it was finished Keith told us they both “Had a great day out yesterday at the Lakelands Trails Staveley event. Really well organised and fantastic setting and a tough 700 ft climb. The gap is getting wider (5 mins now) and i can only see it going 1 way.“ 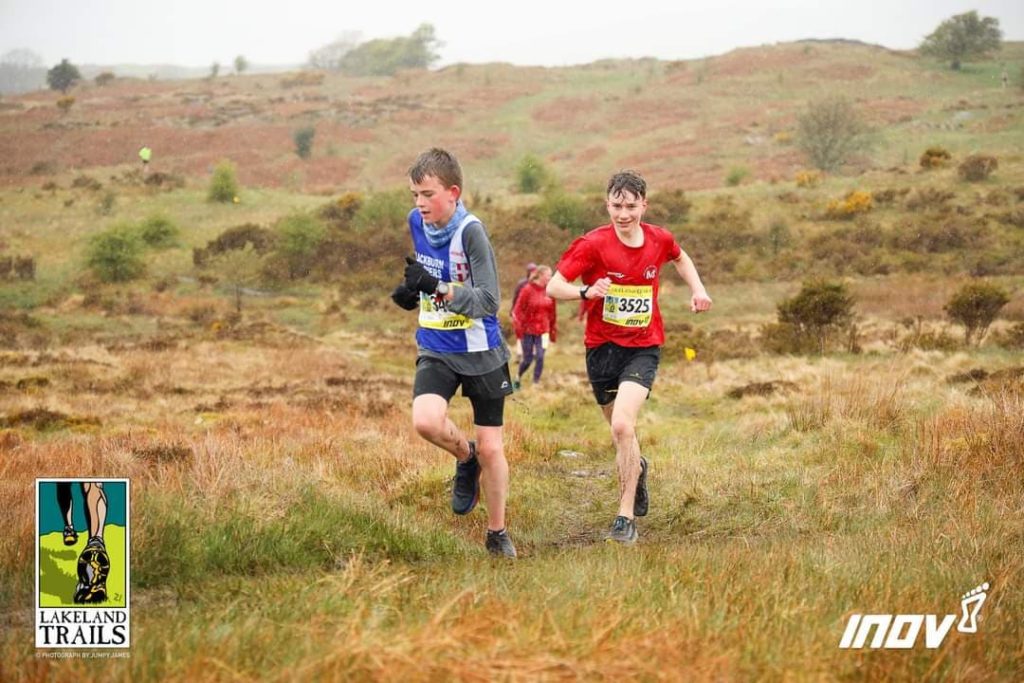 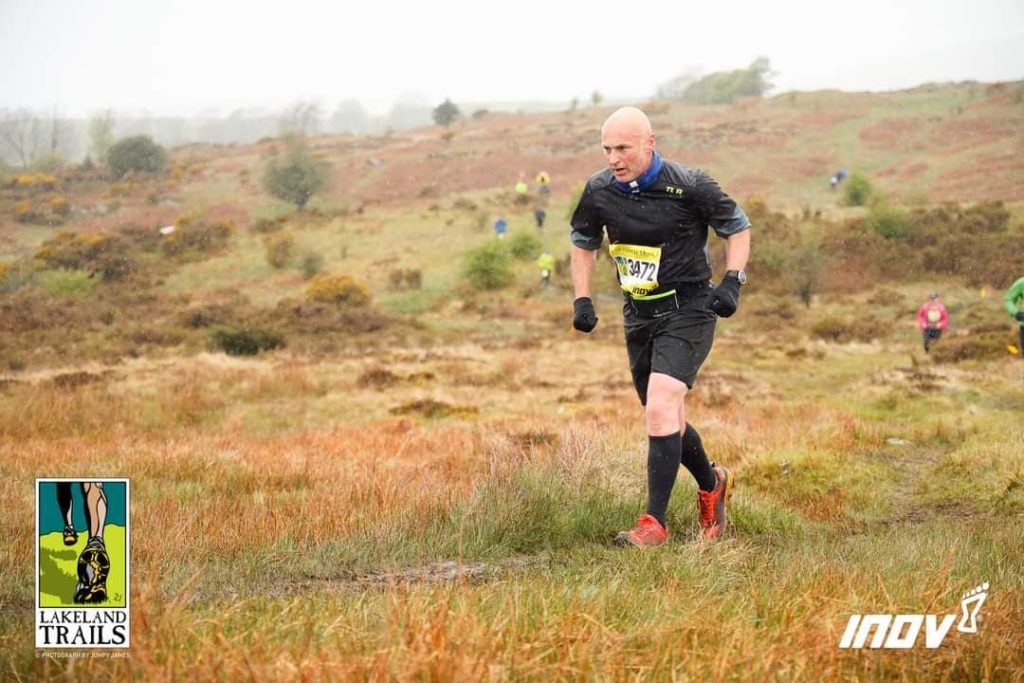