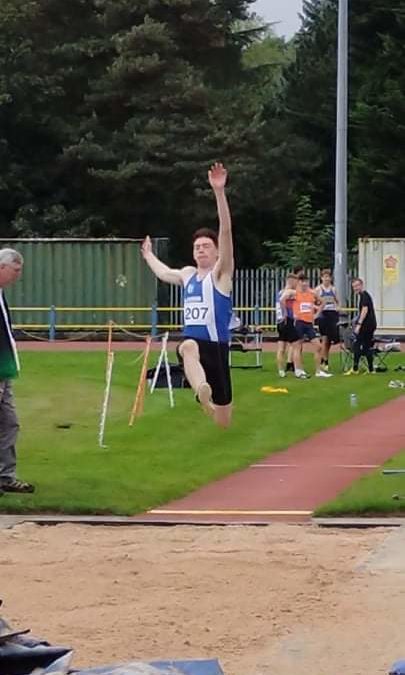 U20 Blackburn Harrier’s – George Whittaker and Poppy Mae Preece took on the Combined Events Classic at Trafford last weekend, over two days, September 25th and 26th. For George it it was his first actual attempt at a Decathlon and for Poppy, her first attempt at an Heptathlon. Five athletes took part in the U20 Decathlon, one of whom was an U17. In the Heptathlon, Poppy was the sole U20 and competed along with nine U17’s.

George had 10 events over two days to complete and went into it with a points target in mind, hoping to exceed 5000 – and he was agonisingly close with a total of 4957 which proved to be good enough to win the event from Southport’s Sam Coupland in 2nd (4911). At the end of Day 1 George commented “day one of the Decathlon, went really well, pleased about my results and it also being a good learning experience as it is my first decathlon. I feel like there is a lot more to come I can get out for future competitions. But as for now very tired legs and resting up for the next day.” George clocked 11.89 for the 100m (3rd), added 22cms to his Long Jump with a new PB leap of 5.84m (4th), added over half a metre to his Shot Putt with a new PB of 9.23m (3rd), improved his High Jump by 11 cms with a new PB of 1.66m (4th) and set a new PB in his 400m by a second and a half with 53.96 (3rd). Four new personal bests out of five events set him up nicely with confidence for the next five. 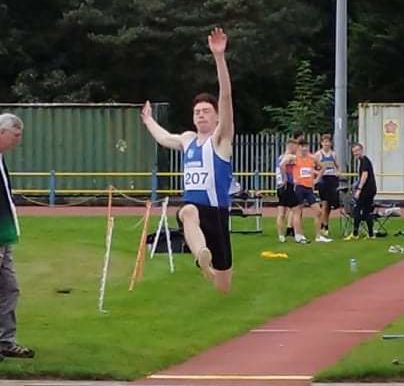 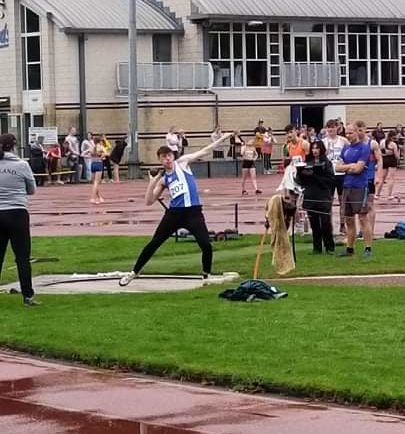 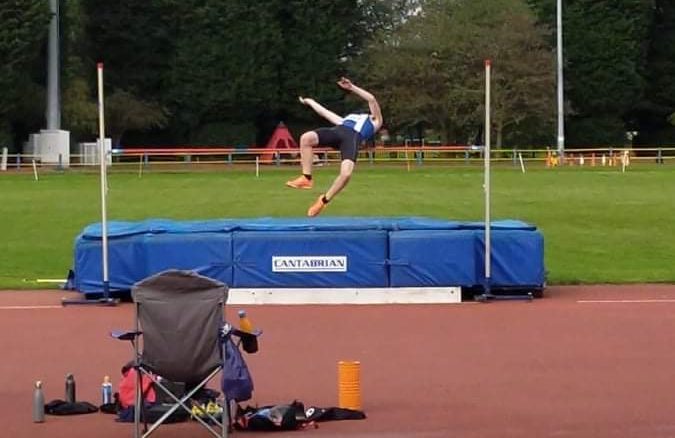 His first ever attempt at the 110m Hurdles saw him run 18.7 in 3rd spot, followed by taking a win in the Discus with 34.18m, equaled his personal best in the Pole Vault with 3.00m (3rd), threw 35.39m in the Javelin (3rd), finishing off the two days of competition with the ‘dreaded’ 1500m – having not raced that distance since 2017 – in which he clocked 5.25.70 (3rd). A tired but happy athlete spoke to the Club after telling us “The 1500m is hell” hahaha — I got PBS in most things, but know I have a lot more to give so I’m not too disappointed”. I was a little disappointed with not getting 5000 points but if I work on a couple more technical aspects I’ll be easy over.”

Poppy, was like George, participating in her first individual Combined Events fixture after a season which has seen her set new personal bests at 100m, Pole Vault, High Jump and Long Jump. After taking on seven events Poppy told the Harriers that “it was a great weekend so I really enjoyed it and I’ve got plenty of things to work on over the winter. I’m looking forward to next season. I really enjoyed this weekend, it was like time was still for the duration of the two days, learnt a lot and I’m very excited to see what I can produce next time.” 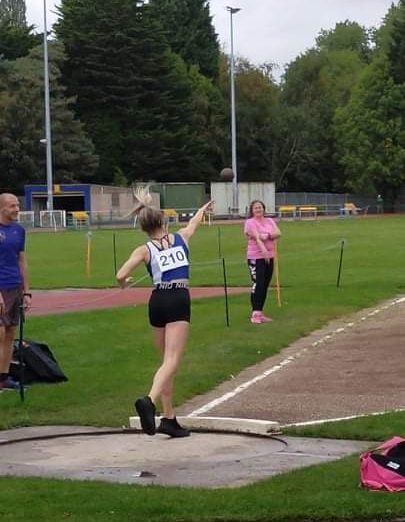 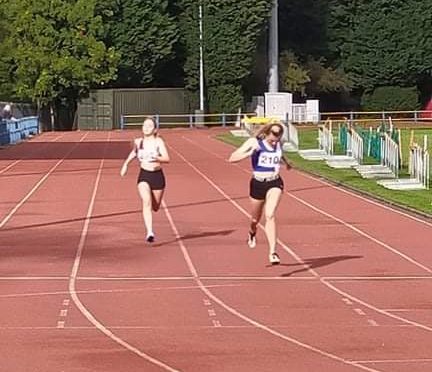 ∇
Matthew Heywood – first year as an U20 – went to the Final Fling Throws Meeting in Wrexham at the weekend and came away with more personal bests, adding nearly half a metre to his best in the Hammer with a new PB throw of 52.57m, extended his best at Discus by over three metres to set a new PB for the event of 28.44m, put on close to four metres, for his third new PB of the day in the Javelin (28.40m) and finished off with a throw of 8.89m in the Shot Putt. Senior athlete Anna Peers had a pretty good day too posting a new PB in the Hammer with 30.62m in 3rd place, won the Javelin with a seasons best 40.18m, placed 2nd in the Discus with a throw of 36.32m and ended the day with a 3rd place throw of 10.53m in the Shot Putt.

∇
Yet more Medals for Isabel Holt over this last weekend. It has been an amazing month for this U17 athlete, being part of the England Gold Medal winning team in the Junior Home International, winning Bronze in the English Junior Fell Championships and winning Gold at the Northern U17 Women’s Road Relay Championships in Redcar – to which she added, a Bronze Medal in the English Schools Fell Championships held at Sedbergh on Saturday September 25th.

Eighty eight runners – male and female – set off with 85 finishing in the Yr 10/11 Championships among which were Blackburn Harriers Isabel Holt (Colne Park HS) and team mate Codie Dewhurst (Darwen Aldridge Community Academy). Charlie Allmond was the overall winner in 28.39 with the first female – Amelia Lane clocking 32.05. Isabel finished as 3rd female and winner of the Bronze Medal in a time of 34.14 and told us that she was “So happy to get bronze and end the fell season on a high.” Codie ran 40.08 in 42nd spot overall and although he told us he was disappointed with his result on the day, he can be proud of what he has done this year. 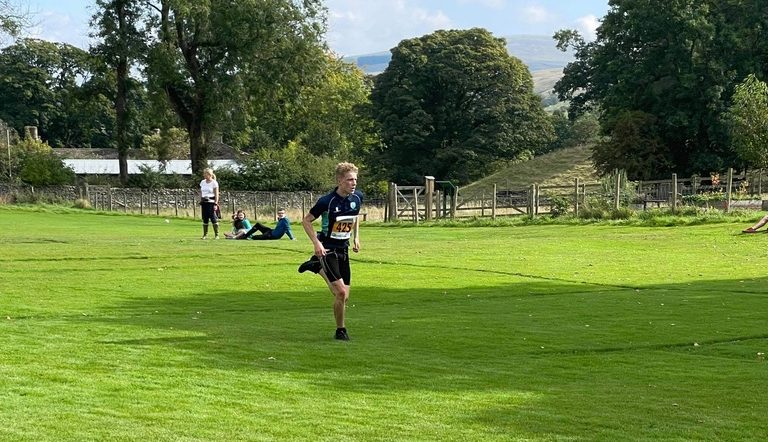 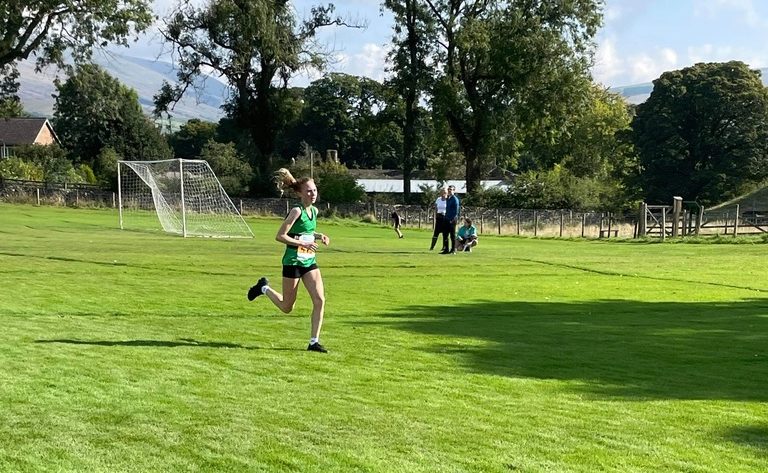 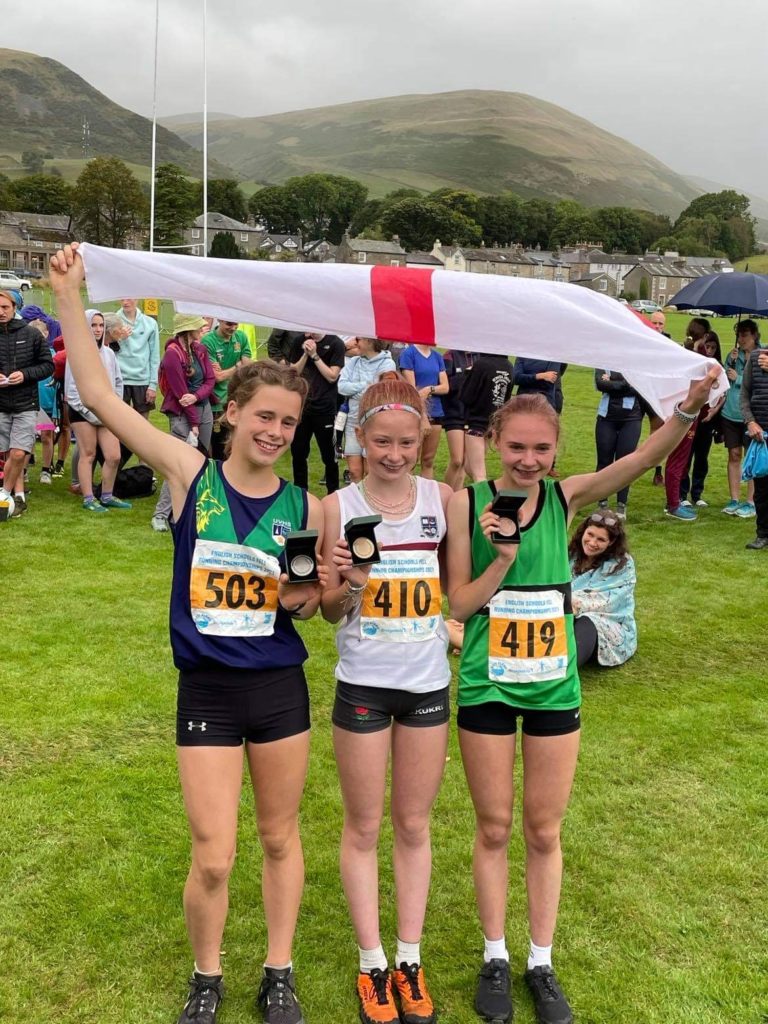 One hundred and nineteen finishers in this race won by Keswick’s Sam Stead in 1hr 14.39 with the first woman – Lou Osborn placing 37th in 1hr 37.09. Blackburn Harriers indefatigable Helen Leigh was among the action coming home in 59th place, running 1hr 45.56 and 6th woman. Helen spoke to the Harriers after finishing commenting that she “was 6th at Coledale Horseshoe yesterday in 1.45. Very humid conditions and a late breakfast meant I felt sick for most of it but quite pleased with my time over a tough course. Fastest I’ve ever run round it and the first time I’ve done it as a race

Abigail Stratton decided to have a go at the Beaverbrook 10k held in Blackpool which turned out to be a good decision for her as she came home as first female in the race with a time of 39.59 and told the Club afterwards that it was a “Nice change doing my long run in Blackpool and an added bonus of the win.” 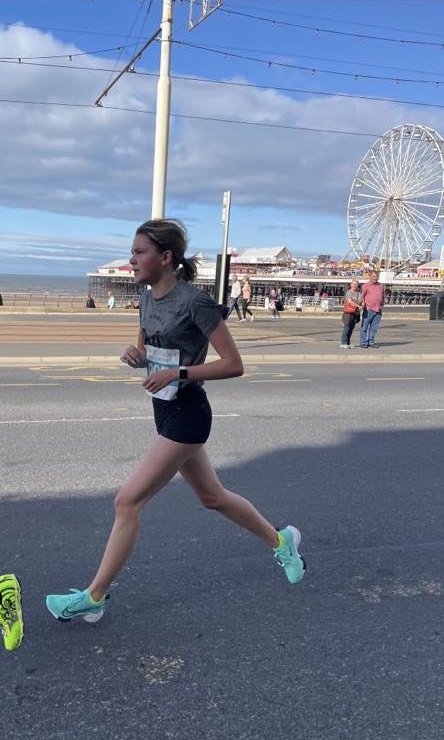 Half Marathons for Charlotte Atkinson and Jan Buckingham at the weekend which saw Charlotte run in the Great Manchester Half whilst Jan ran at Warrington. Charlotte who has been running some 5k’s and park runs in the lead up came home in 267th spot with a time of 1hr 39.17, just over a minute outside her best time. 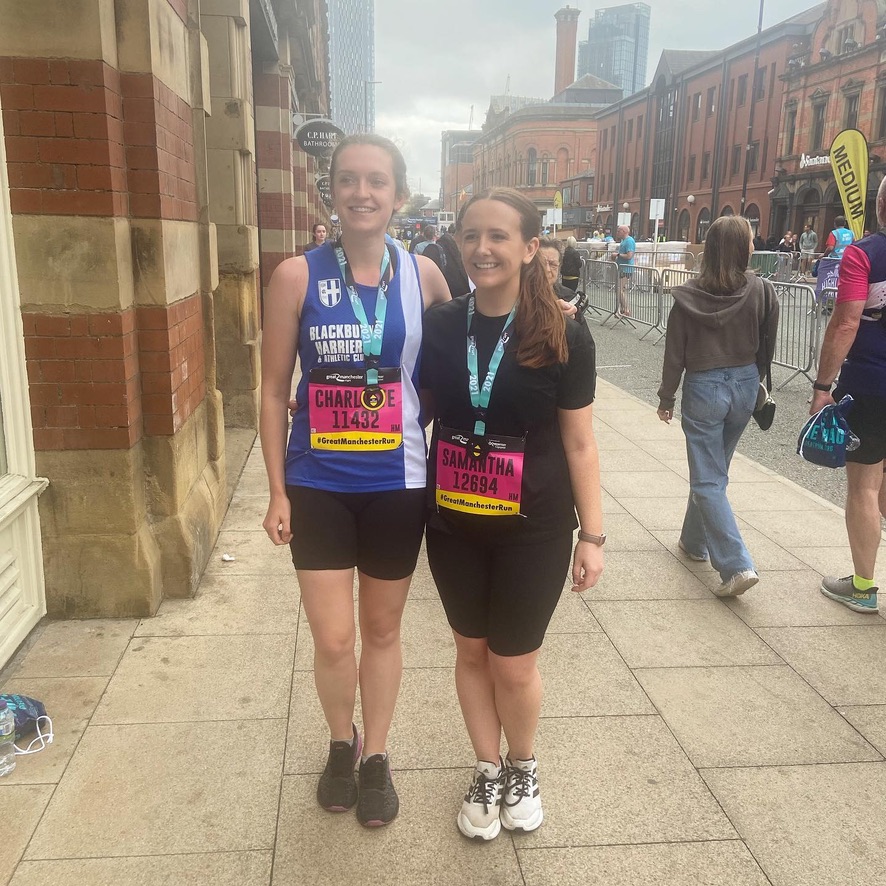 Jan (V55) ran at Warrington which had 578 finishers – won by Chris Hazeldene in 75.35 – hadn’t been involved in a race since the Run Through Tatton Park Run in October 2020, nearly a year ago. Taking on a half marathon was a tough ask with that in mind but ended well for Jan as she came home in a time of 1hr 58.22 and 2nd V55.  Jan commented on her social media that “today I randomly decided to do the Warrington Running Festival Half Marathon with very little distance training. At nearer 58yrs old than 57, was 1.5 mins off a PB, but ran it faster by 6 mins than I did the Great North Run 12 years ago!!! Pics are before when I thought it was a good idea, after is a broken woman on the floor! Really enjoyed it though”. 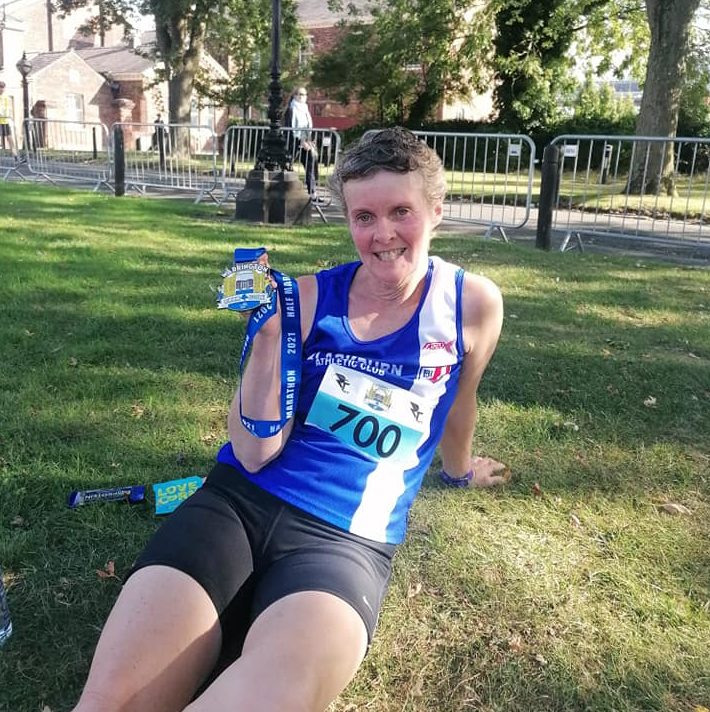